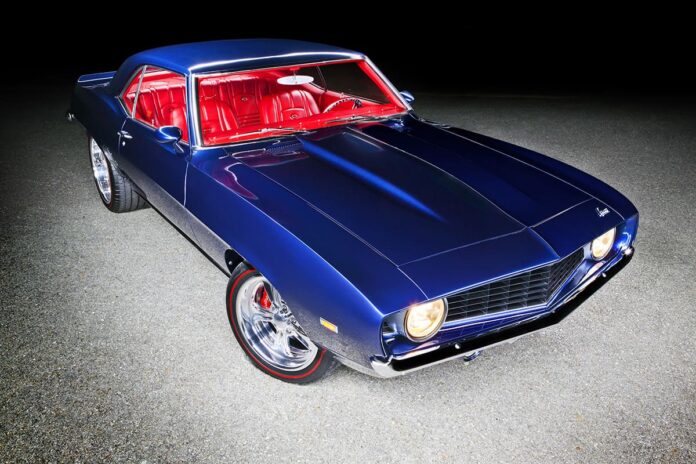 For Katrina Updike, Patience Paid Off in Getting the ’69 Camaro of Her Dreams

Katrina Updike has always had a soft spot for first-gen Camaros. As she quickly points out, “I’ve always wanted a Camaro, and the ’69 is my favorite because it was the year I was born.” That longstanding desire to own one was a bucket list item, but as any hard-core Chevy person will tell you, ’69 Camaros in decent shape have become increasingly hard to find–and expensive. As is often the case, being in the right place at the right time, or knowing the right person, goes a long way to finding what you lust after. In Katrina’s case it was a matter of knowing the right person and playing the long game, which in her case was about 10 years.

The object of her desire was a ’69 Camaro that was owned by a friend of the family. Her only obstacle was that he was having fun with it a quarter-mile at a time. That’s right–it was a race car. Buying a car that has seen track time can be a mixed blessing. On the one hand you might score a car with low miles that hasn’t been wrecked, or you may end up with a car that has been cut up and stripped down to the bare minimum for the sake of speed. This ’69 was covering it at both ends–it had low miles but was tubbed and caged. Motivation came in the form of a 400ci small-block on steroids mated to a TH400 that transferred the power to a Dana 60 stuffed with 4.88:1 gears. She explains, “The body was still in beautiful condition. It had a huge hood scoop so it took two of us to drive it. One would steer, and the other would look over the scoop to see where we were going. It ran on airplane fuel and it was fun to drive, but it wasn’t very functional.” 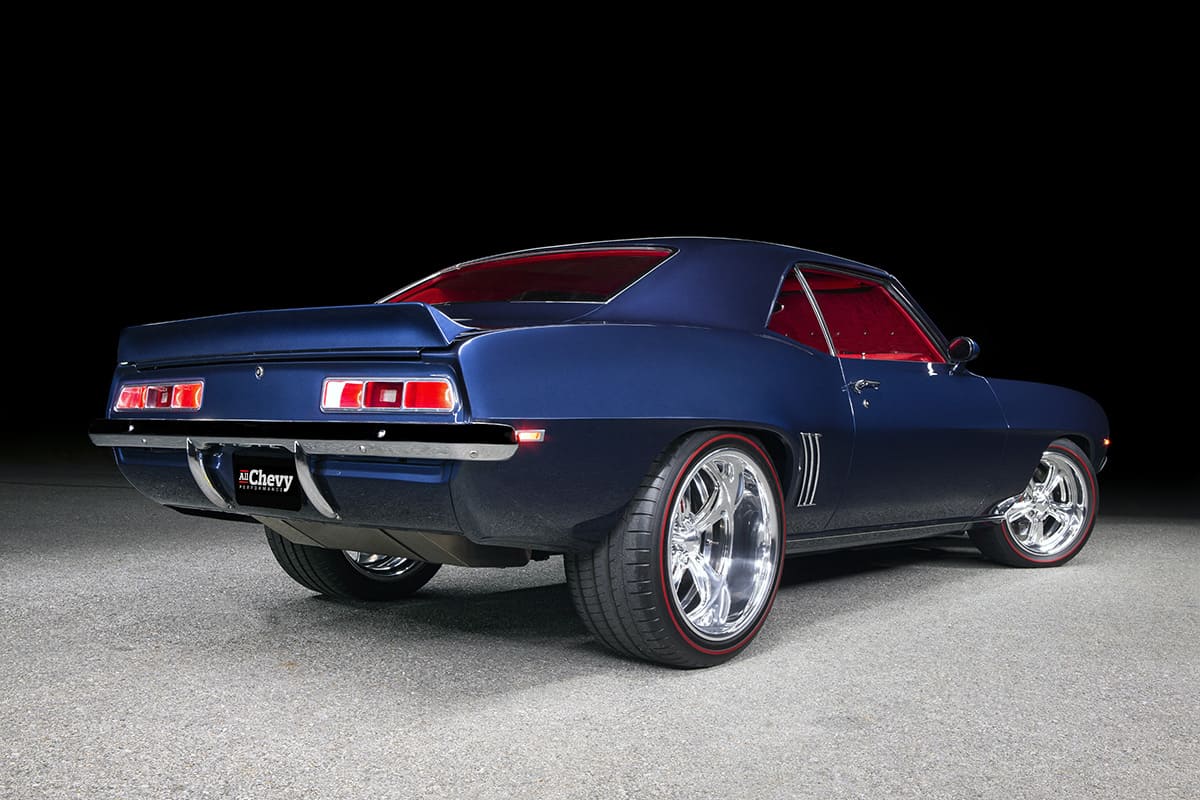 Katrina’s plan from the outset was to do something with the Camaro that reflected her personal tastes. Helping her along the way was her husband. She points out, “Bob encouraged me to make all the decisions and all the choices. He wanted it to be all my ideas–my baby, so to speak.”

When it comes to building custom cars, ideas need skilled enablers to bring them to life. That’s where Lonny Gordon and the crew at East Coast Muscle Cars (ECMC) in Craley, Pennsylvania, came into the picture. Their mission was to bring some civility back to the Camaro by retaining the classic lines of the ’69 while updating everything. 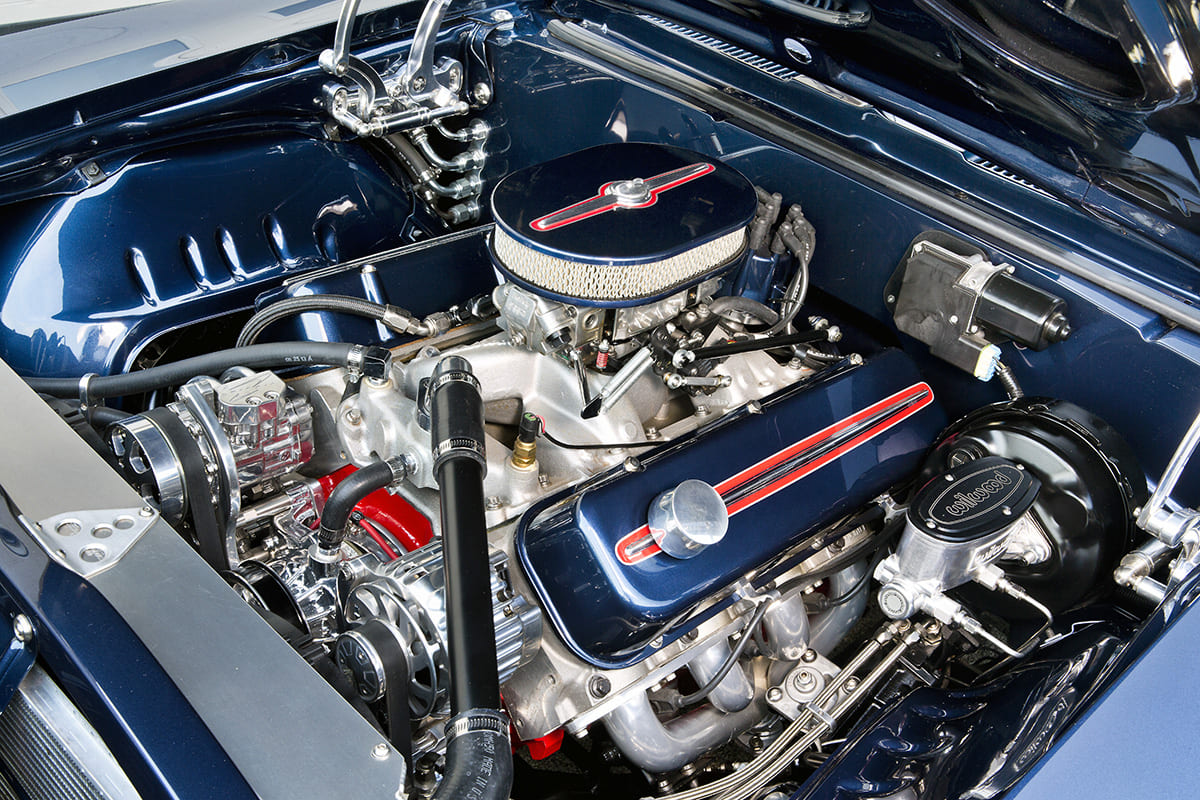 One of the first decisions she made was to nail down what would lie under the hood. Using the existing 400 was on the table for a split second, but the “bigger is better” mantra led to the installation of 540ci big-block. The guys at RaceKrafters Automotive in Lancaster, Pennsylvania, were given the task of building up the cast-iron block with some Dart aluminum heads, JE pistons, Eagle rods, and an Edelbrock aluminum intake capped off with a Holley carburetor. Spent fuel exits via a set of Sanderson headers and a 3-inch stainless exhaust system mated to a pair of Flowmaster mufflers. It’s a combination that cranks out a solid 650 ponies. 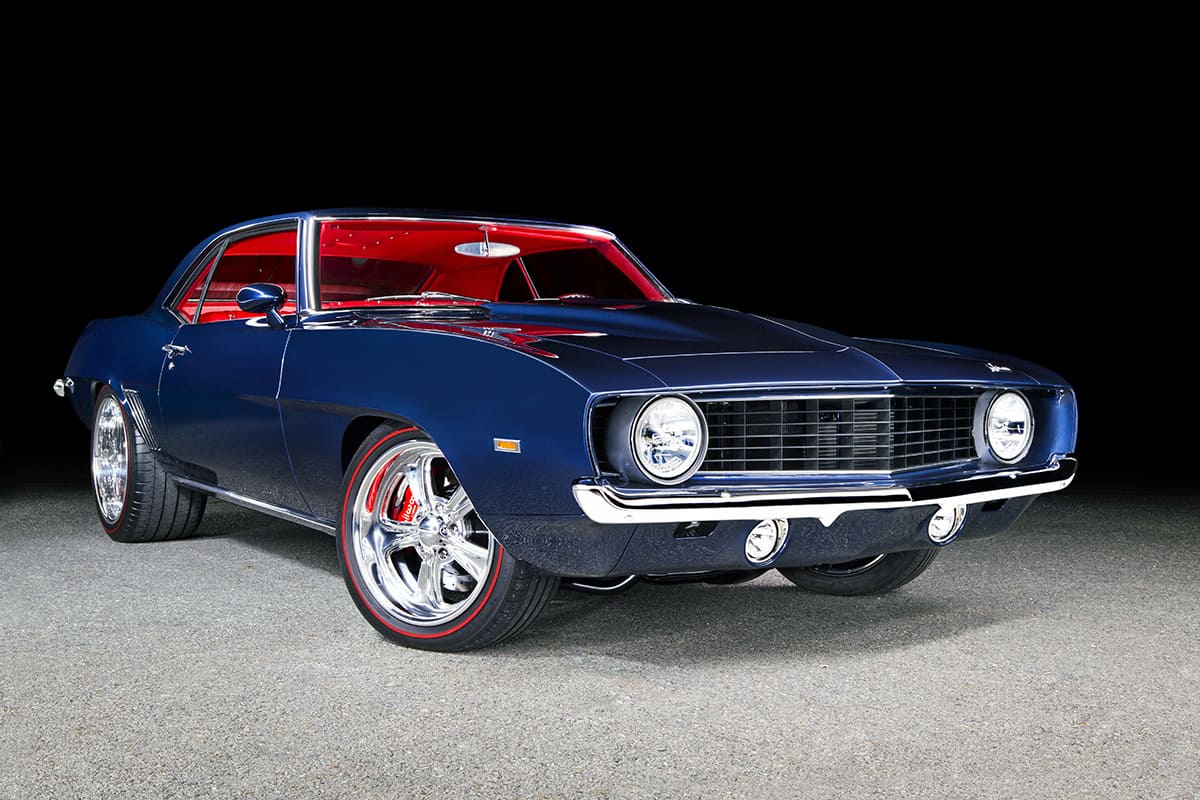 Backing up that big-block goodness is a GM 4L85E four-speed automatic with a 3,200 stall converter, while a Ford 9-inch shod with 3.73:1 gears and a Truetrac limited-slip differential lays it all down. Further additions at the rear included some Detroit Speed 3-inch lowering springs, JRi adjustable shocks, and Detroit Speed mini-tubs. Up front, the Camaro received 2-inch drop spindles, tubular A-arms, coilovers, and a sway bar—all from Detroit Speed, along with JRi adjustable shocks. Wilwood binders were employed to enhance stopping, with six-piston calipers up front and four-piston units out back clamping down on 13-inch rotors at all four corners.

Building a solid drivetrain comes down to a seasoned chef who puts all the right ingredients in place. Dealing with the body involves a completely different set of subjective choices, which are usually driven by the customer’s tastes. For Katrina, the visual aspect of the car was the most important, but before that could happen, the crew at ECMC had to peel back the old paint. What they found underneath was in surprisingly good condition, with only the quarter-panels and hood needing replacement. With the body fully rejuvenated, the color choices were put on the table. She recalls, “I didn’t want a color that everyone else had. I wanted it to stand out. Axalta Solar Blue is what I ended up choosing.” When it came to the interior, nothing transferred over from the drag car. She adds, “Lonny and I worked on the interior and all the details to the way that I liked it. For color, he suggested that I go with a red interior. I wasn’t sure about going with that color, but I went with it. People love it, and I love it, too.” 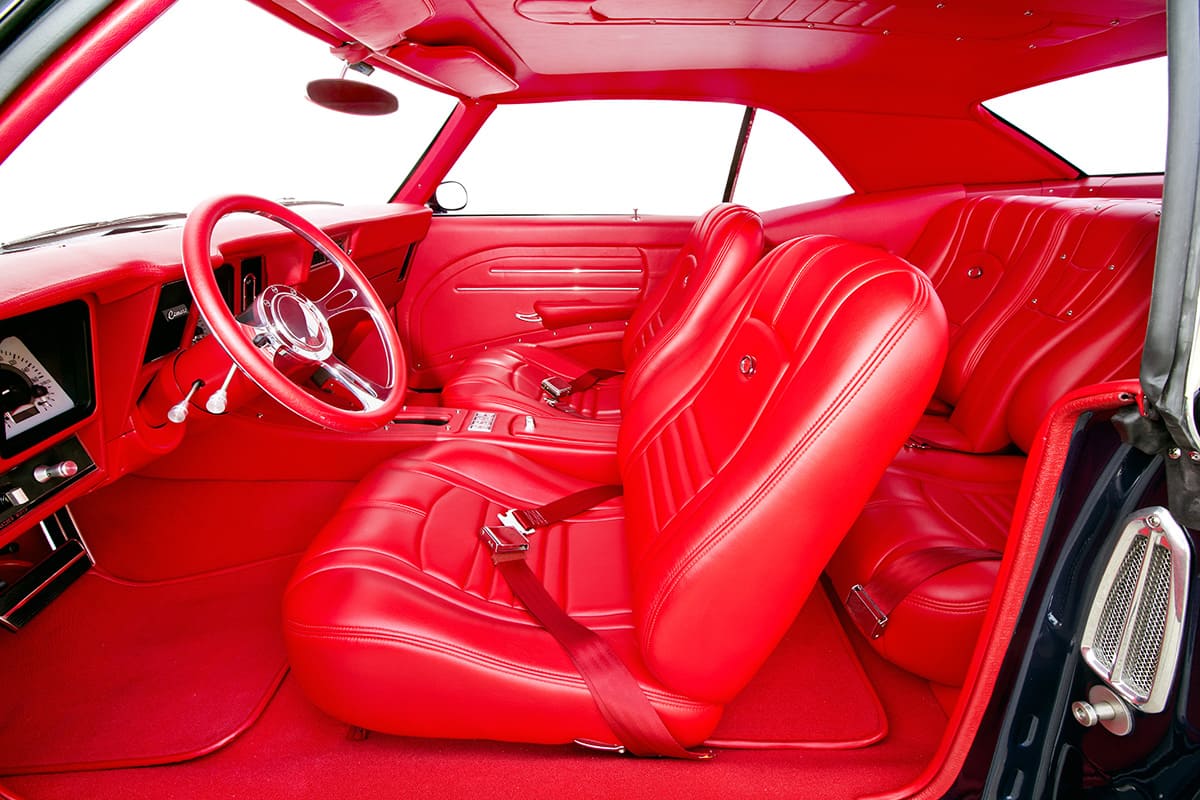 Crafting that interior was farmed out to the guys at Driven Fabrication & Upholstery in Middle River, Maryland. They created everything around a set of custom seats, console, and carpet. It was all wrapped in red Ultraleather, with Dakota Digital instruments installed, along with a Billet Specialties Fast Lane steering wheel and a Hurst quarter stick. The last piece of the visual puzzle was the wheel-and-tire combo. That choice came down to a set of Billet Specialties aluminum wheels wrapped in Michelin Pilot Sport tires.

Her journey to transform the Camaro into something personal spanned just over five years, but it’s been well worth it. Beyond the sheer enjoyment every time she gets behind the wheel, Katrina also points out, “the thing that makes me smile and laugh the most is when we are out somewhere with the car and guys look at my husband and ask whether ‘is that really her car and you actually let her drive it?’” 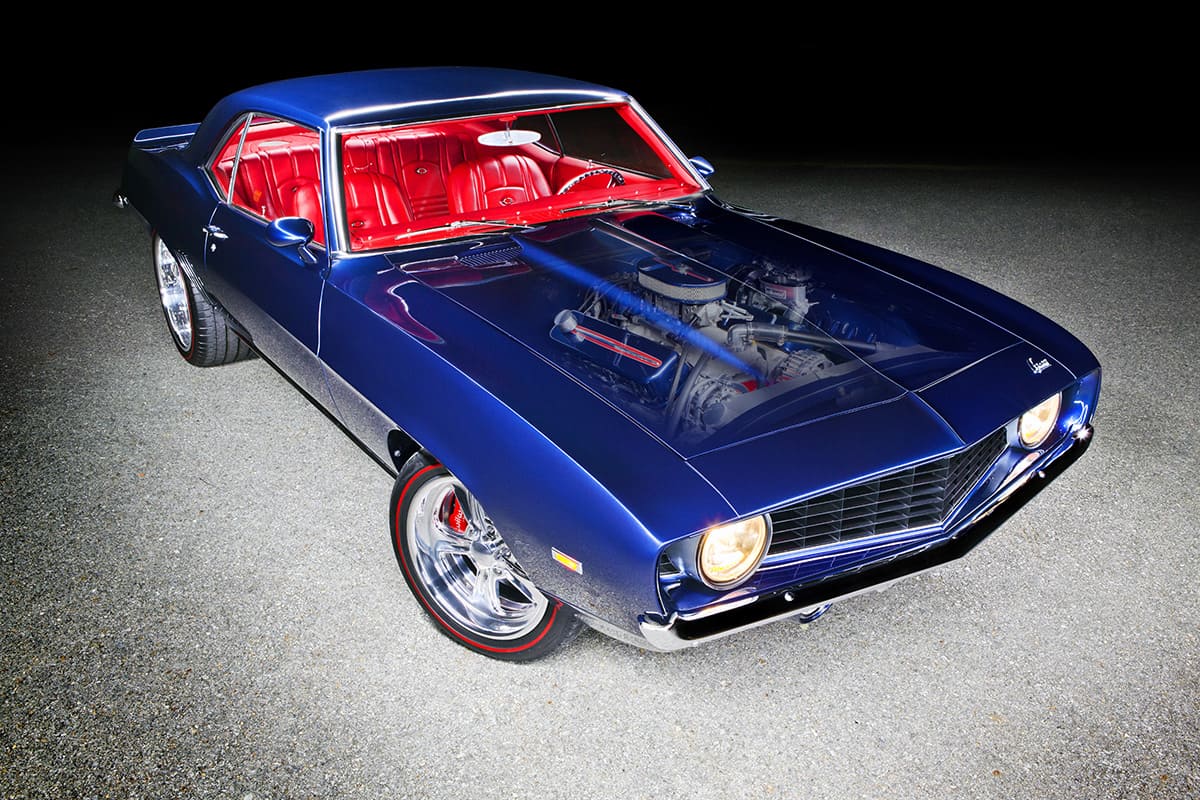