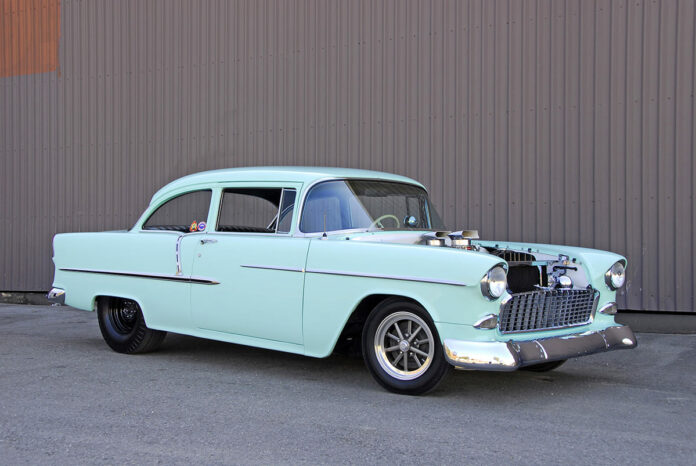 There’s nothing better than waking up on a Saturday morning to the sound of straight pipes while your older brother spins wrenches on some of the most-wicked cars in town. For Mark Rogerson, of Aylmer, Ontario, Canada, watching his brother, Tim, dial in the goods on an endless stream of hot rods and muscle cars gave him an adrenalin boost by bringing everything he saw in magazines to life right before his eyes. It wasn’t long till he was wrenching right alongside the older crew to help out on any task at hand.

Being able to experience the thunder firsthand at St. Thomas Dragway in nearby Sparta was the spark that fully lit his magneto. Being front and center watching his drag racing heroes do battle on the quarter-mile with the heavy scent of nitro in the air was all it took to propel him into the world of high performance. By the time he earned his license he laid down the cash on his first ride, a 1969 Camaro RS, followed by a 1960 Chevy El Camino, which led to plenty of cruising the ’strip with his friends. He eventually sold off both cars to set out on a build that had been percolating in the back of his mind for some time: a 1955 Chevy Gasser.

Finding that diamond in a pile of sand isn’t an easy task; Mark spent plenty of time on the hunt, leaving no stone unturned. He eventually sourced a local ad offering up a 1955 Chevy 210 that just so happened to be a former E/Gas class winner from back in 1966 while racing in Minnesota. The trunk held plenty of secrets of the 210’s past, including a number of trophies earned and even an award jacket confirming its history. Mark immediately did the deal, leaving with the keys in hand. Once home the old Gasser yearned for the streets again, still wearing its weathered yellow paint and packing a 283ci Chevy mill linked to a Muncie M21 four-speed. It was a perfect platform to make the local scene while honing his skills on the dragstrip. Mark ran it as-found for the first season.

To bring the car up to its current standards, Mark got busy starting with the base. With the frame in good order, a 1957 Pontiac rear packing 4.88 gears spinning Moser Engineering 29-spline axles was suspended in place by 2-½-inch de-arched leaf springs matched to Monroe heavy-duty tube shocks. Up front, the stock IFS was refreshed and matched to new coil springs with two coils removed, combined with Belltech Nitro Drop 2 tube shocks to set the stance. Linking the goods to the street are 15×4 E-T Gasser model wheels wearing with Pro-Trac/Coker blackwalls and 15×7 steelies out back sporting Firestone/Coker Dragstar cheater slicks.

When building a Gasser, you’ve really got to bring the goods when it’s engine time. Mark chose to retain the 283 and sent it over to Answer Performance in London, Ontario, Canada, to turn up the heat. The block was massaged to 292 ci and packed with a GM steel crank and rods linked to 11:1 Venolia slugs, while an Isky roller stick adds a good thump. A set of tweaked 461 fuelie heads add plenty of punch, while a vintage Edelbrock TR1 tunnel ram intake sports a pair of Edelbrock Performer Series 500-cfm carbs capped by Cal Custom 40-40 air scoops. ACCEL ignition lights the fire while spent gases dump through BlackJack headers to 2-½-inch steel pipes and Flowmaster mufflers. A warmed-over Muncie M21 four-speed by Danny’s Transmissions of London features a Centerforce clutch. Dyno’d at 385 hp, the engine has plenty of go-power.

With the car surviving countless decades unscathed, bringing it back to life was easy since there were no hard-core repairs to tend to. Richard Hilton of Rich Refinishing Auto Body in London stripped and metal-finished the body, set the gaps, and prepared it for paint. For a timeless look, he laid down a coating of Axalta Navistar Green accented by an ivory engine bay.

Inside it’s all business; starting with the factory dash housing, its original gauges are complemented by Stewart-Warner dials to watch the vitals. A Grant steering wheel mounts to a chromed stock column while a Hurst Ramrod shifter picks off the competition. London Upholstery recovered the stock interior in traditional pleats using black vinyl accented by black loop carpet.

This is one wicked Chevy prowling the streets of Ontario, and we dig it! ACP