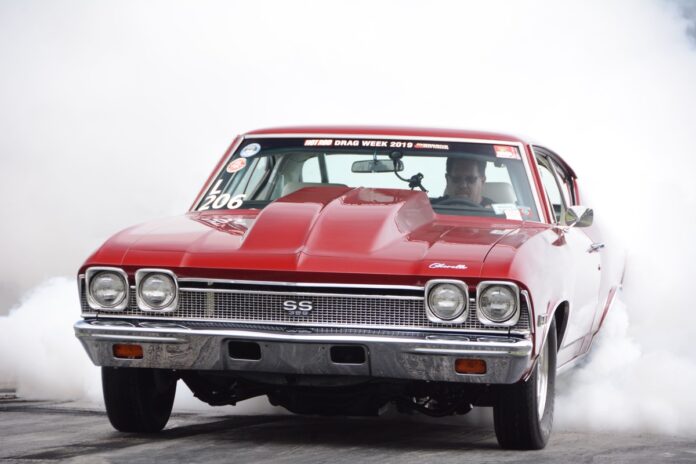 The Pro Street craze was about a 20-year run of big tires, blowers, and wild paint jobs. The look started in the late 1970’s when the street machines of the era mimicked drag cars by installing large rear wheel tubs and massive rear tires. The look progressed for quite a while, resulting in the over-the-top show cars that many of us remember from the late 1980s and early 1990s. While some of these undrivable show cars gave Pro Street a bad name, there were still a select few that were legit performers with big power to match the aggressive looks. Pro Street fizzled out in the late 1990s, when big billet wheels and Pro Touring cars came into play, but some folks believe that Pro Street never died.

In the past few years, there has been a resurgence in Pro Street cars and trucks, and it’s spawning new events that cater to this type of build. We were fortunate enough to attend the inaugural Chattanooga Pro Street Summer Nationals, held at Brainerd Motorsports Park in Ringgold, Georgia (just south of Chattanooga). The drag strip served as a meeting point for dozens of out-of-towners who traveled hundreds of miles to attend the event. One particular fellow traveled nearly 1,200 miles from New Hampshire to show off his 1971 Camaro.

The multi-day event offered several cruising opportunities in the Chattanooga area leading up to the main event on Saturday. Pro Street cars were the stars of the show, but other cars and trucks were welcome to participate in the show and the burnout contest that followed. After the show concluded, a group of the Pro Street guys came together for a huge group photo to commemorate the inaugural event. We’re certain that the Chattanooga Pro Street Nationals will return for 2021, so be on the lookout for a late-June date and an even bigger turnout of big-tire street monsters.

For now, take a look at a few of the highlights from the inaugural event! ACP