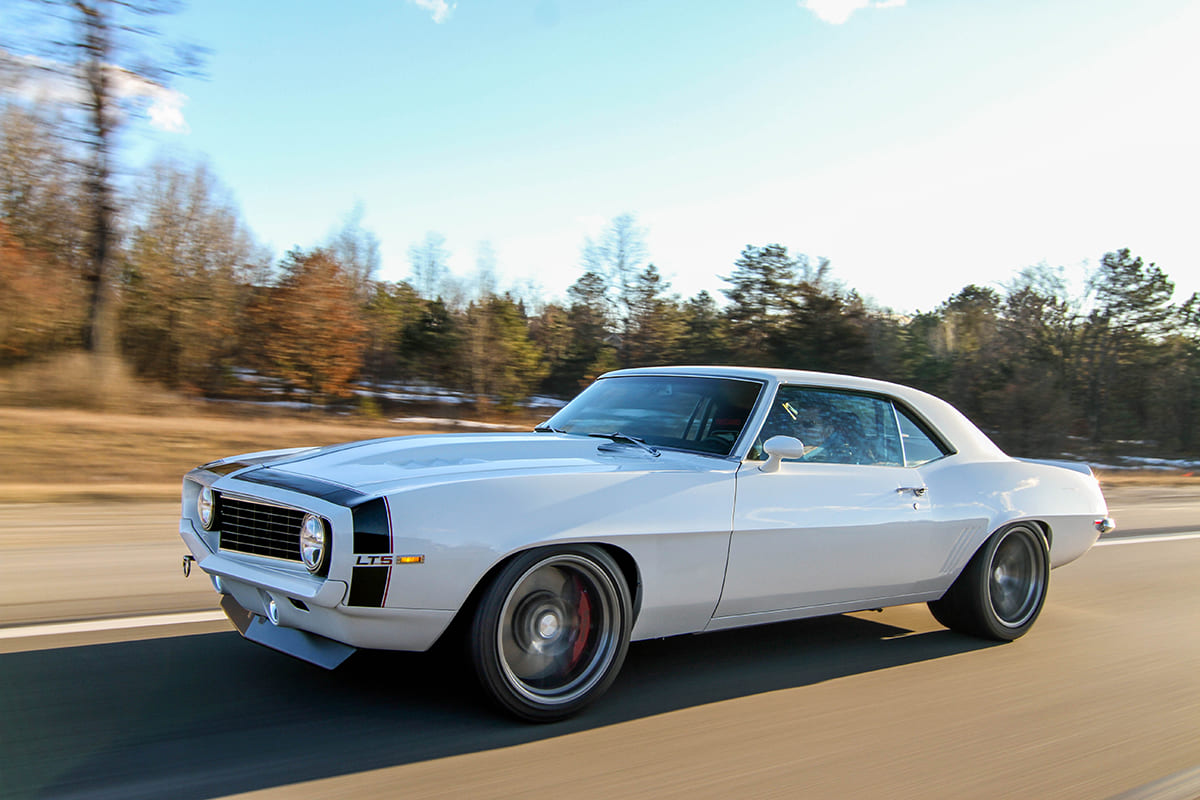 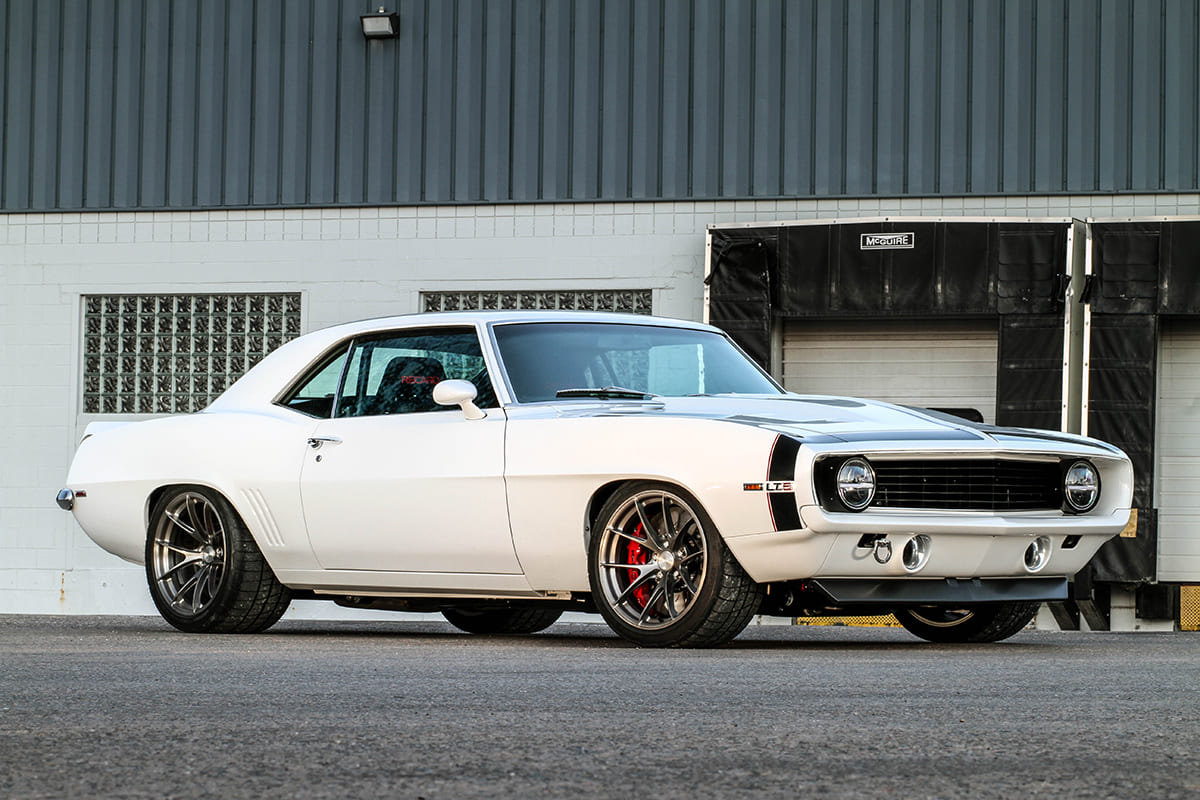 Together, the Van Nuys and Norwood assembly plants pushed more than 243,000 1969 Camaros out of their collective doors. Mark Stielow hasn’t quite yet turned all of them into Pro Touring powerhouses, but with his latest build—dubbed Apex—he’s getting closer.

In reality, the white, LT5-supercharged 1969 is “only” his 17th first-gen Camaro. Even still, he must be using up what’s left of the nation’s strategic reserve of 1969 models. This one started as an original, rust-free California black-plate car and its build consumed much of his stockpile of long-cultivated takeoff parts.

“I used my last good, original grille on this one,” Stielow says. “The original parts are definitely getting harder to come by these days.”

It has been 52 years, after all, since the iconic 1969 models were built, but Stielow’s cars have commendably walked the tightrope between classic and contemporary, channeling the latest performance technology behind their vintage veneers. Apex builds on the theme, with its virtually unadorned exterior wrapped around essentially an all-new car.

“With each build, the intent is to take what was learned on the last car and further refine it,”  Stielow, the Pro Touring pioneer who was also recently named director of motorsports competition engineering at General Motors, says. “That’s the challenge that makes each new build all the more gratifying.” 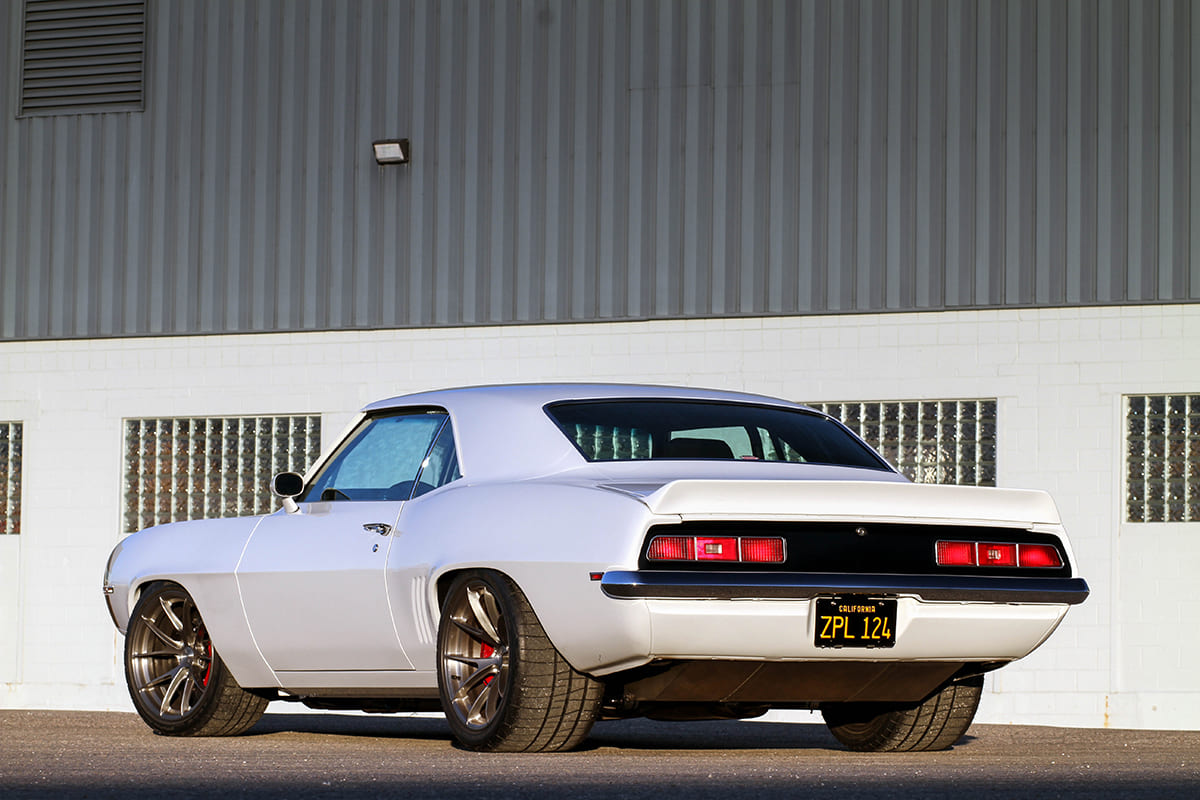 Many of Stielow’s previous cars were built with competition as the primary goal, but Apex was developed as the ultimate grand tourer—a track-capable car, but one with more accommodation for long-distance driving.

“It’s definitely a track-hardened car, with all of the necessary coolers and overflow tanks, but comfort was also a priority,” he says. “I’m having just as much fun driving the cars these days as racing them.”

When it came to building in the capability, including integrating just about every chassis and suspension component in the Detroit Speed catalog, Stielow once again turned to Matt Gurjack’s shop, Sled Alley, in suburban Detroit. Gurjack has been Stielow’s go-to fabricator for a number of projects. 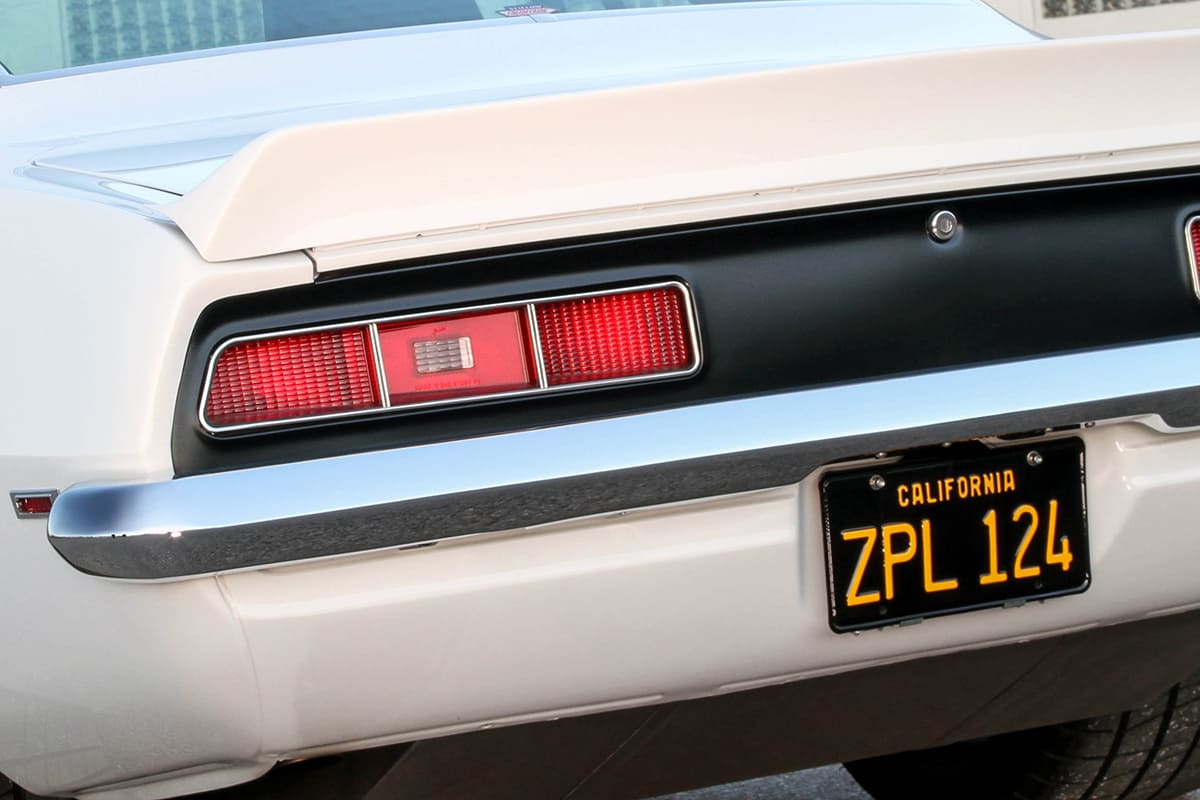 “[Gurjack] gets it, 100 percent,” Stielow says. “He’s not just a fantastic fabricator, but he sees the whole project in three dimensions, and his attention to detail is second to none.”

Indeed, much of the genius in this car, and others Gurjack has touched, is its seamlessness. The chassis, interior, and engine swap fab work is so well-integrated that pointing out all the intricacies is almost impossible. In fact, it mostly looks like nothing was done, even though hours and hours were spent on every last detail. It’s the mark of exquisite craftsmanship. 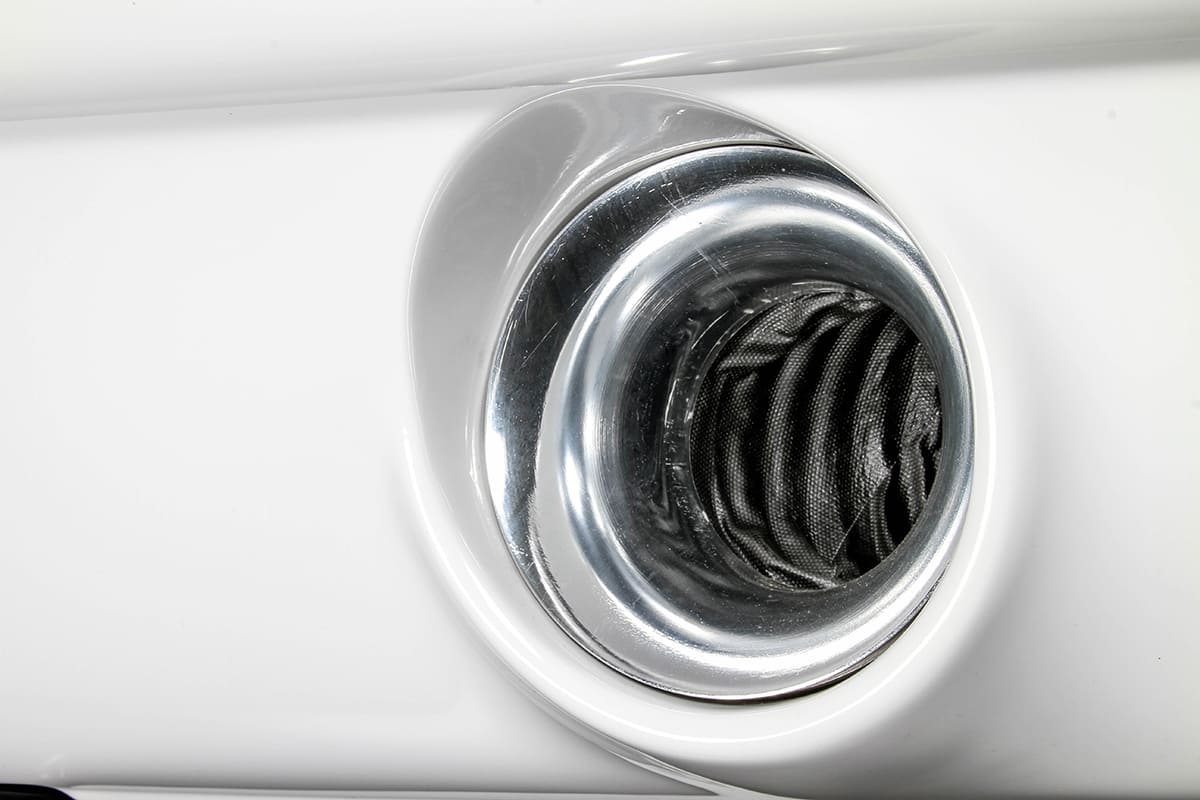 Some of the more visible examples are the brake-cooling ducts. They are channeled from the holes in the front valence where the original turn signals resided, and through the Detroit Speed hydroformed front subframe, exiting the frame right behind the front rotors. It’s gorgeous work.

Gurjack’s seamless fabrication dovetails nicely with the minimalist philosophy Stielow generally imbues with his cars. Apart from a carbon-fiber trim piece here and there, the look of his Camaros is purposely restrained. No extraneous splitters. No wildly divergent details. And no adherence to fad colors destined to look dated in a couple of years.

“I want the cars to look timeless,” he says. “Twenty years from now, I want Apex to still look contemporary and relevant.” 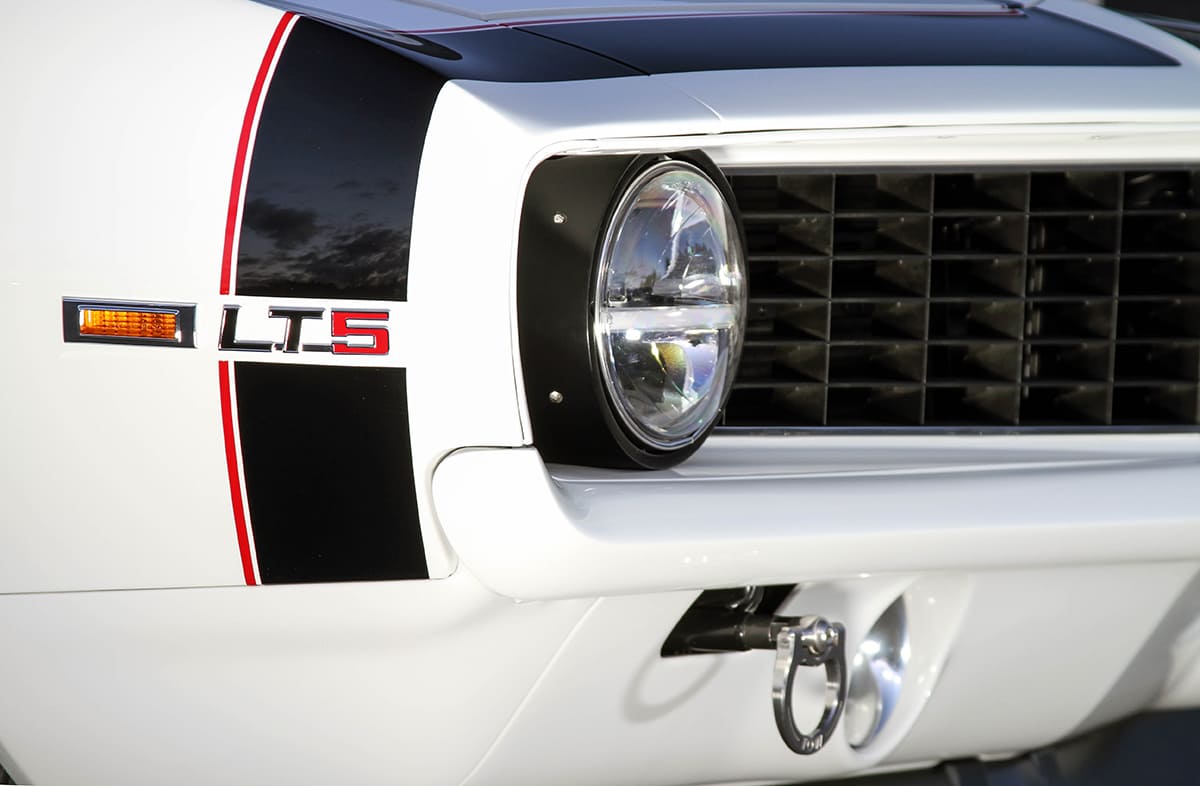 To keep it clean and classic looking, Stielow sent the car to Dutchboys Hotrods, where the Sled Alley–smoothed body was sprayed a bright white Volkswagen color and accented with a simple-yet-effective riff on the RPO DX1 factory stripes, featuring a red outer line rather than the original all-black scheme. Additional exterior details include a set of second-generation F-car outside mirrors, front and rear spoilers, and a vented carbon-fiber hood of Stielow’s own design. There’s also a discreet pair of custom “LT5” fender badges that were created by Michigan Machine Worx, which also fabricated a few custom interior parts.

The car’s appearance is complemented with an aggressive stance delivered by the Detroit Speed front coilover suspension and rear QUADRALink setup, as well as set of Finspeed 18-inch aluminum wheels wrapped with BFGoodrich g-Force Rival rubber. The wheel size was largely dictated by the tires. 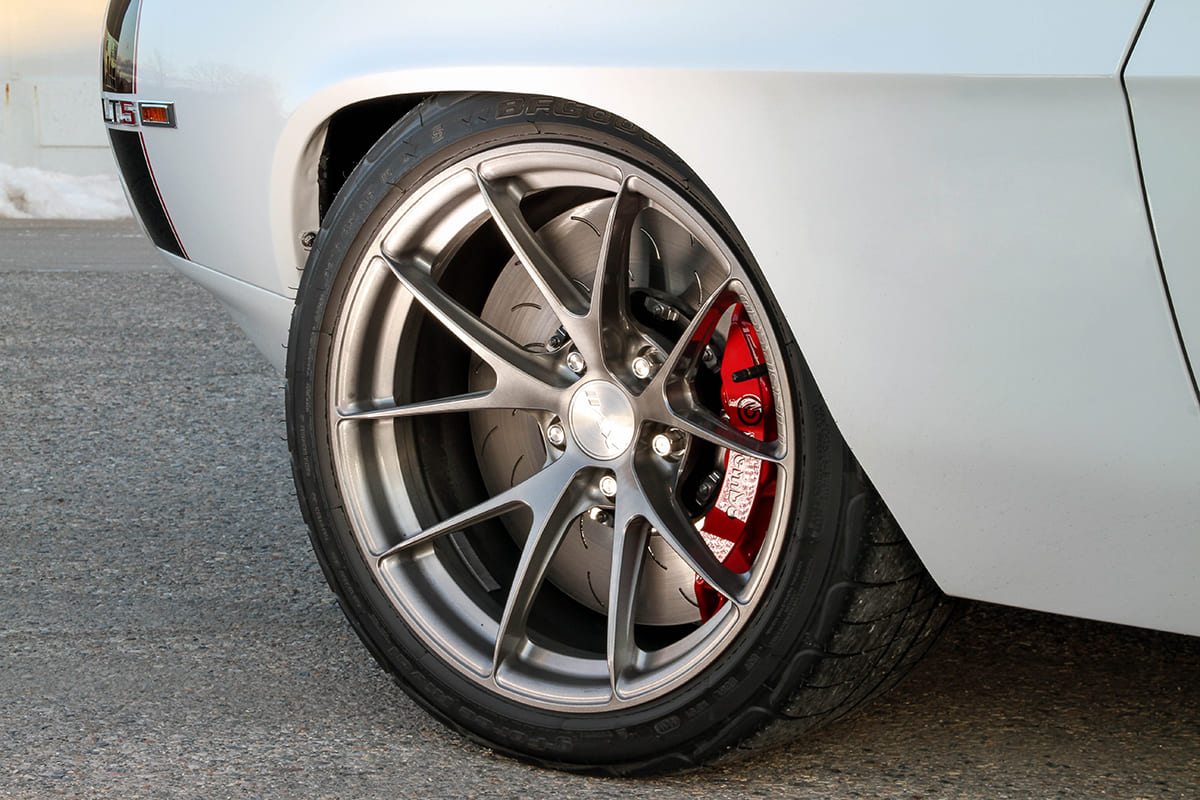 “For most competitive events, you need a tire with a 200-treadwear rating,” Stielow says. “For the size of tires I knew I could get under the fenders, the 18-inch Rivals were the best option, so they largely drove the decision for the wheel size.” 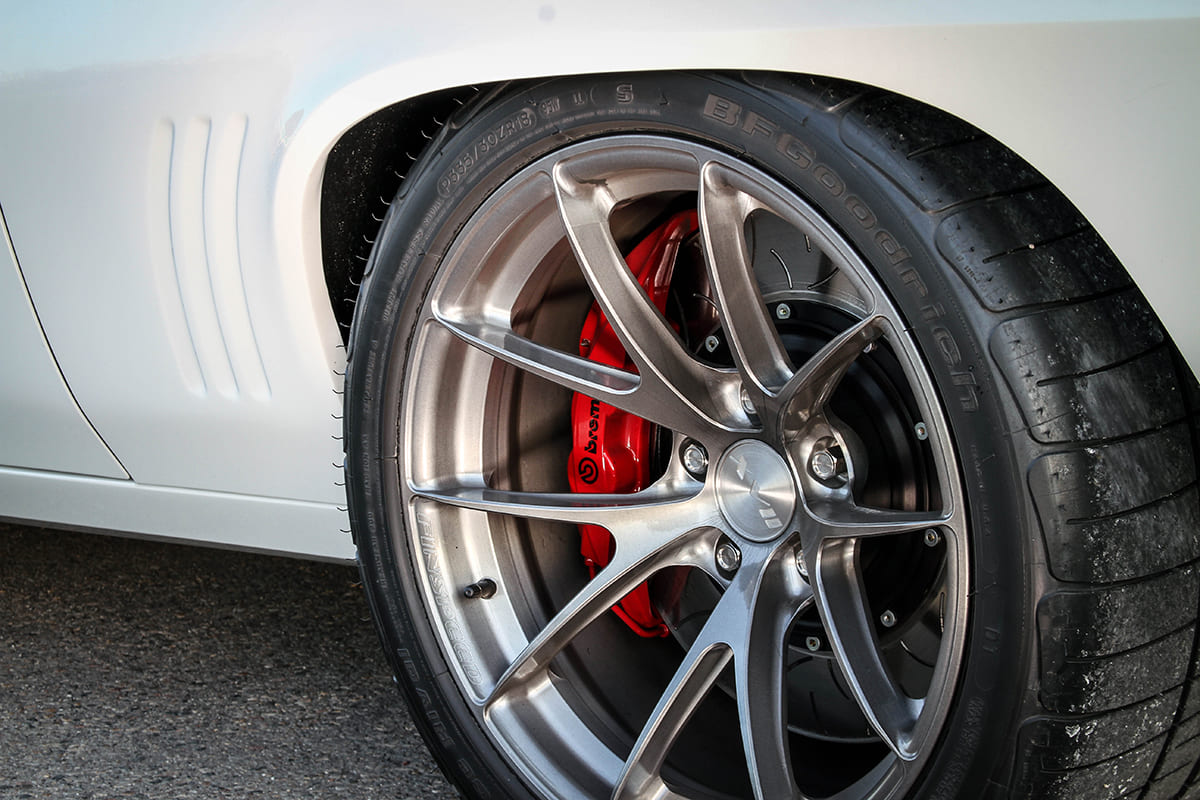 Of course, there are some massive brakes behind the wheels. Big Brembo discs with six-piston calipers in front and four-piston calipers in the rear, while the tried-and-true Detroit Speed suspension elements feature QA1 dampers with new external adjustments. 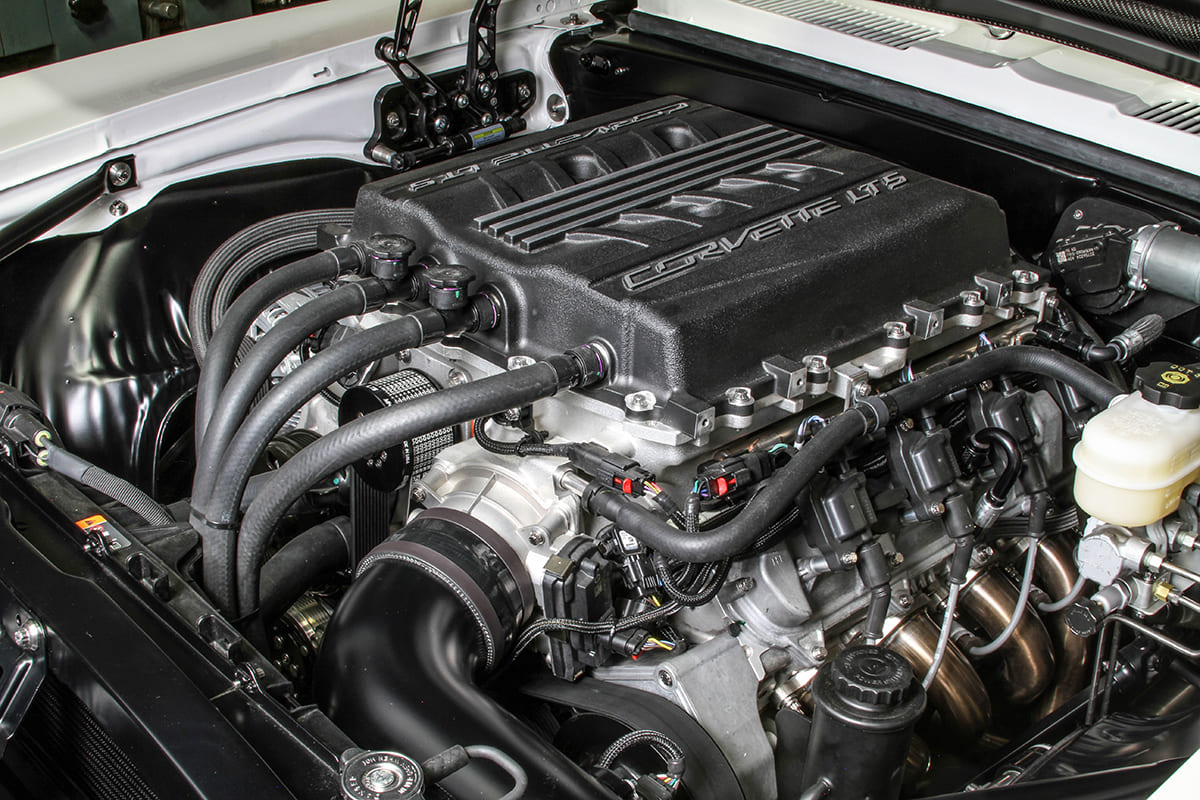 All of that track-capable hardware is necessary to harness the output of the LT5-supercharged engine. When Stielow started the project, Chevrolet Performance’s LT5 crate engine package wasn’t available, so he started with an LT4 and sent it to Katech, where the rotating assembly was upgraded with an LT5 crankshaft, Carrillo rods, and Diamond pistons. The cylinder sleeves were also hogged out by 0.005 inch and a higher-lift/longer duration camshaft was inserted. The whole assembly was balanced and blueprinted, clamped down with ARP fasteners and the humongous Eaton TVS-2650 LT5 supercharger was installed. A pulley upgrade helps the blower spin faster, generating more boost, and a custom fuel system helped the engine put out 915 hp at the crankshaft. 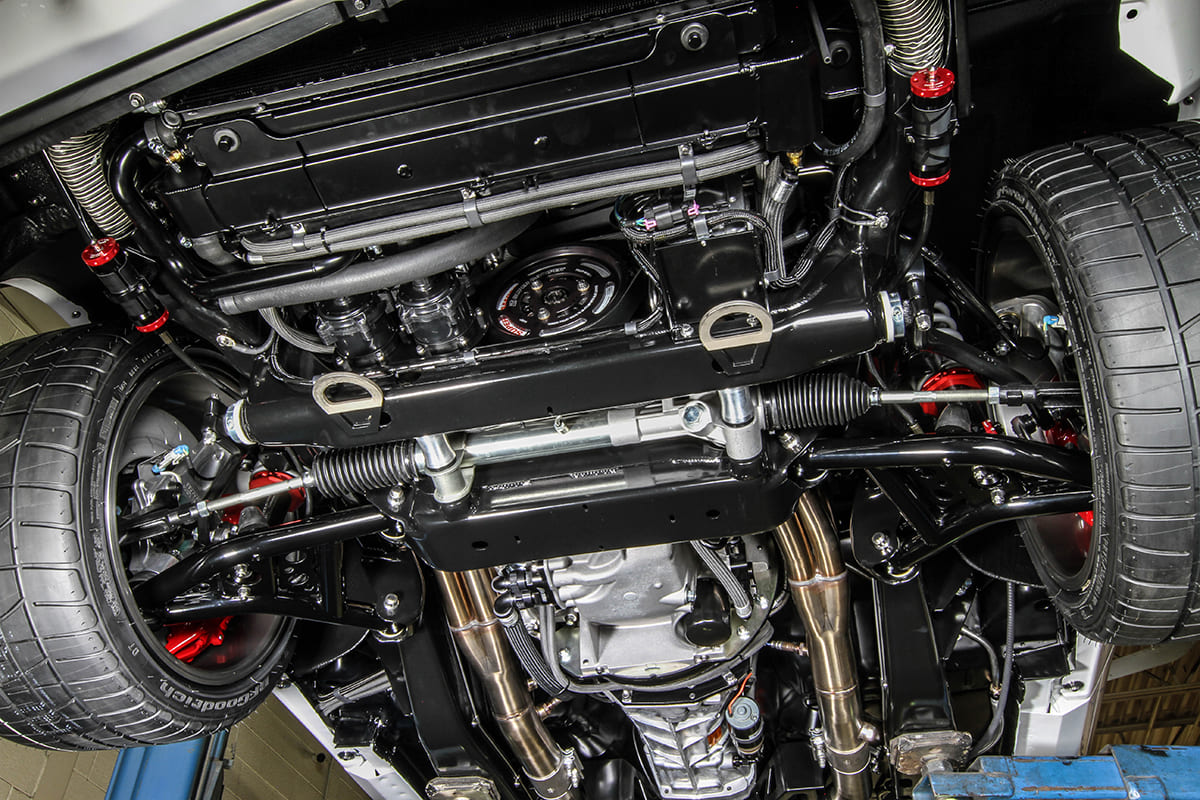 Exhaust chores are handled with Hooker BlackHeart products that were actually prototyped on Stielow’s last 1969 Camaro project. Additionally, a massive, custom C&R radiator/intercooling system helps the high-pressure LT engine keep its cool, while its torque is channeled through a D&D Performance–prepped TREMEC Magnum T56 six-speed transmission and onto a GearFX-built 9-inch rear axle. 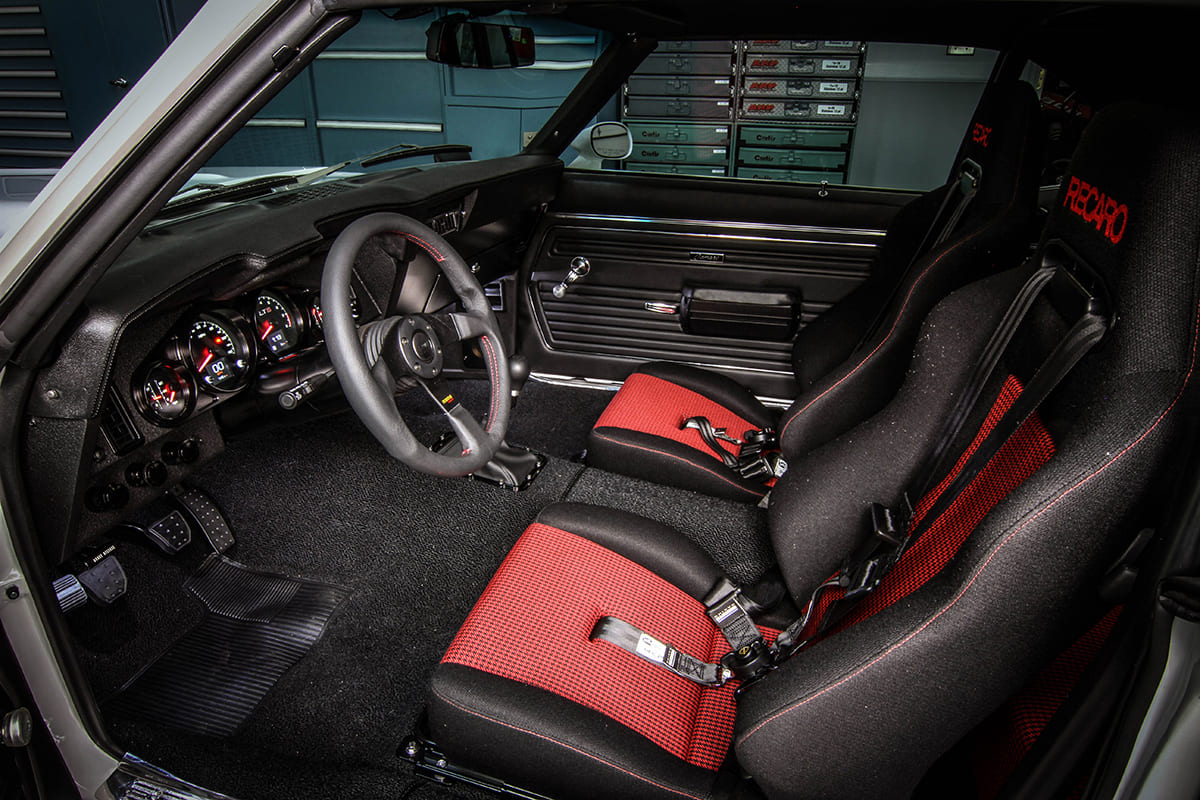 Inside, the Camaro’s cabin mirrors the minimalist philosophy, with a pair of red houndstooth-trimmed Recaro seats, no console, and personalized Dakota Digital instruments set in a custom dashboard that’s underpinned by a Detroit Speed steel dash insert. There’s also a four-point rollbar and the requisite harnesses for the driver and passenger. It’s all that’s needed and nothing more.

Stielow plans to track the car, but his first big test with it will be an 1,800-mile drive from Scottsdale, Arizona, to Tacoma, Washington, on one of the Barrett-Jackson Road Tours. It’s a decided departure from previous builds that went straight from his garage to a road course or autocross, but one he sees as an evolution for his experiences with his Camaros.

“I still really enjoy building these cars,” he says. “It’s sort of my Zen thing, learning from the previous cars to see how much better the next one can be, while also building in the latest performance technology. It’s continual refinement and that’s the challenge I relish more these days rather than simply chasing faster lap times.”

Even with his new responsibilities at GM, Stielow’s quest for an even better first-gen Camaro shows no sign of slowing. He’s got ideas for the next build, with another 1969 Camaro waiting in the wings.

It’s got to be the last one out there, right? He’s built the rest of them. 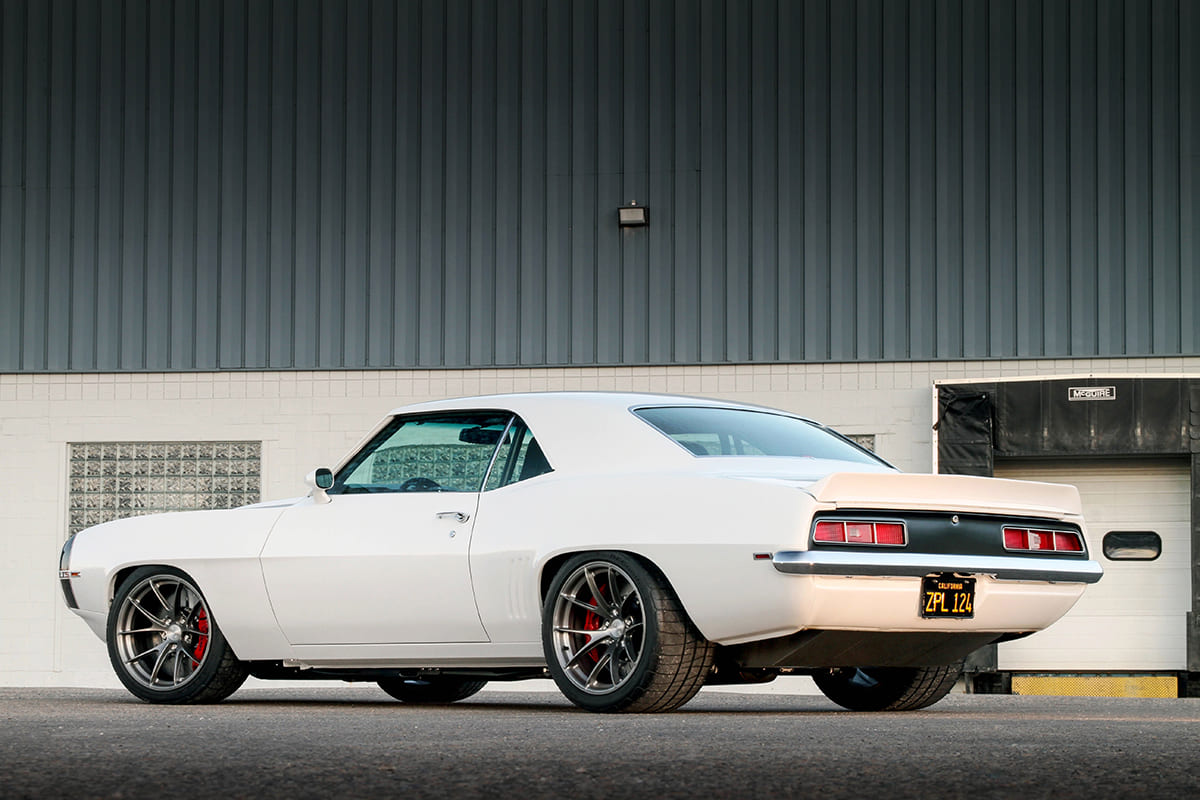