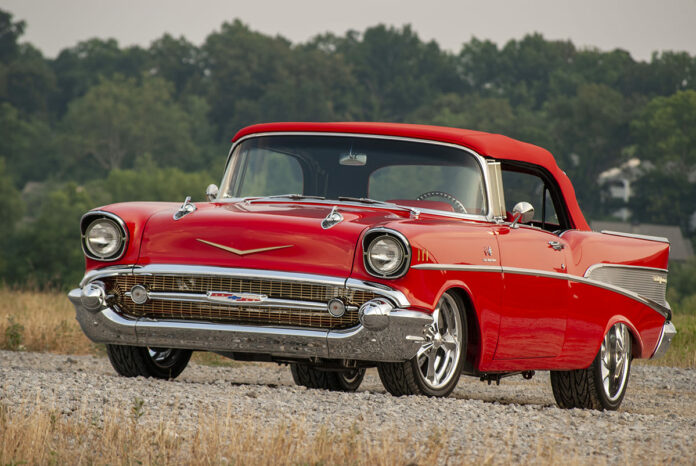 Robert Carter Turned a Rusty Skeleton into this Awesome Machine

Every car guy on this planet has heard about barn finds and amazing discoveries of true survivors. This 1957 Chevy Bel Air isn’t one of those cars—it lived most of its life outdoors, in the Southeast, so you know where this is headed. It didn’t take long for the top to start leaking, which led to the demise of the floorpan, trunkpan, and most of the other panels. After years of neglect, the car was dragged out of the field and taken to Automotive Sandblasting & Restoration (ASR) in Friendsville, Tennessee, for a much-needed makeover.

Alcoa, Tennessee, resident, Robert Carter is the owner of the car and also operates ASR, so building a car of this condition wasn’t new territory. Rusty cars are the norm in Tennessee, but this convertible was exceptionally rotten. It needed lots of metalwork, so the crew got busy and repaired the ailing Chevy. One year later, the car hit the road with Robert behind the wheel, so the ASR crew obviously kept a steady pace. Robert’s goal with the car was to retain the stylish lines of the classic Bel Air while adding modern details throughout the car. Here’s how he did it. 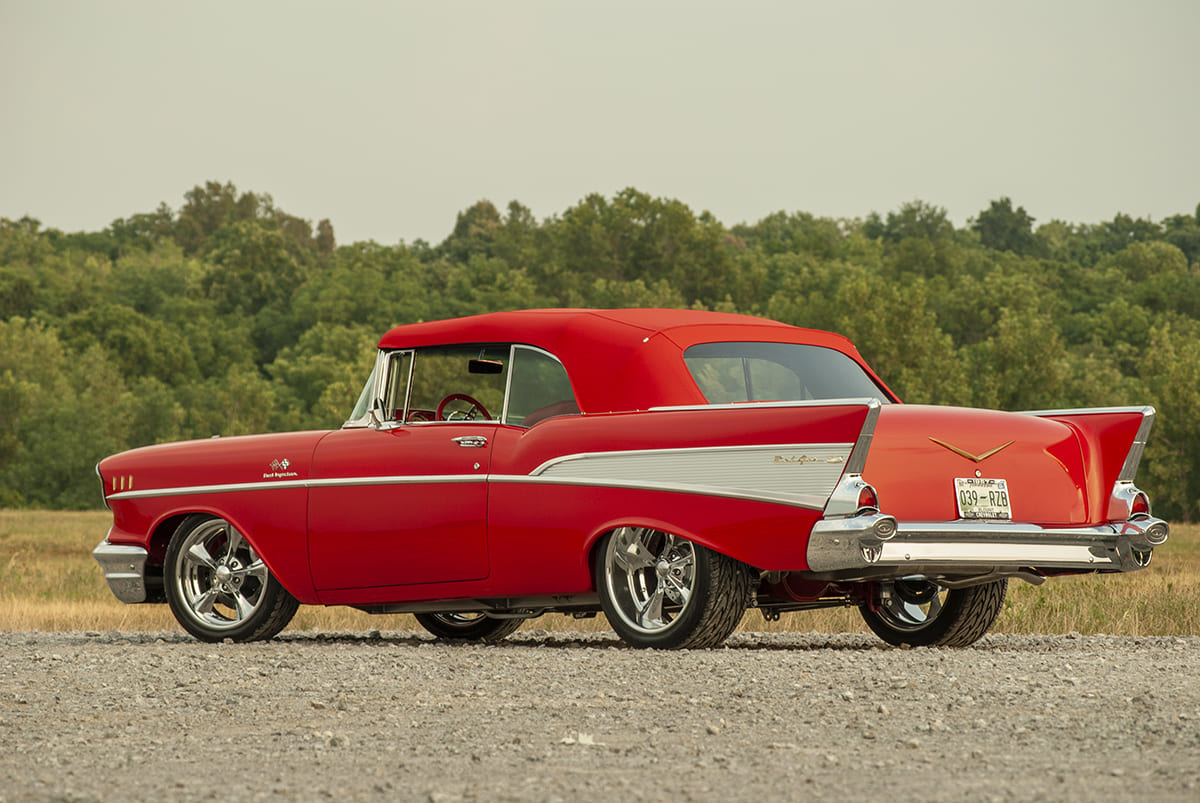 Starting with nothing more than a rough guideline of a 1957 Bel Air convertible, Robert disassembled the car and placed the body on a rotisserie. The frame was rusted so badly that it broke in half, so it went to the scrap pile and a new Fatman Fabrications chassis rolled in its place. Up front, the suspension is a Mustang II design, complete with polished tubular control arms, QA1 coilovers, and a hefty sway bar. Rather than deal with the old steering box and linkage, Robert bolted on a rack-and-pinion setup that is more efficient and user-friendly. 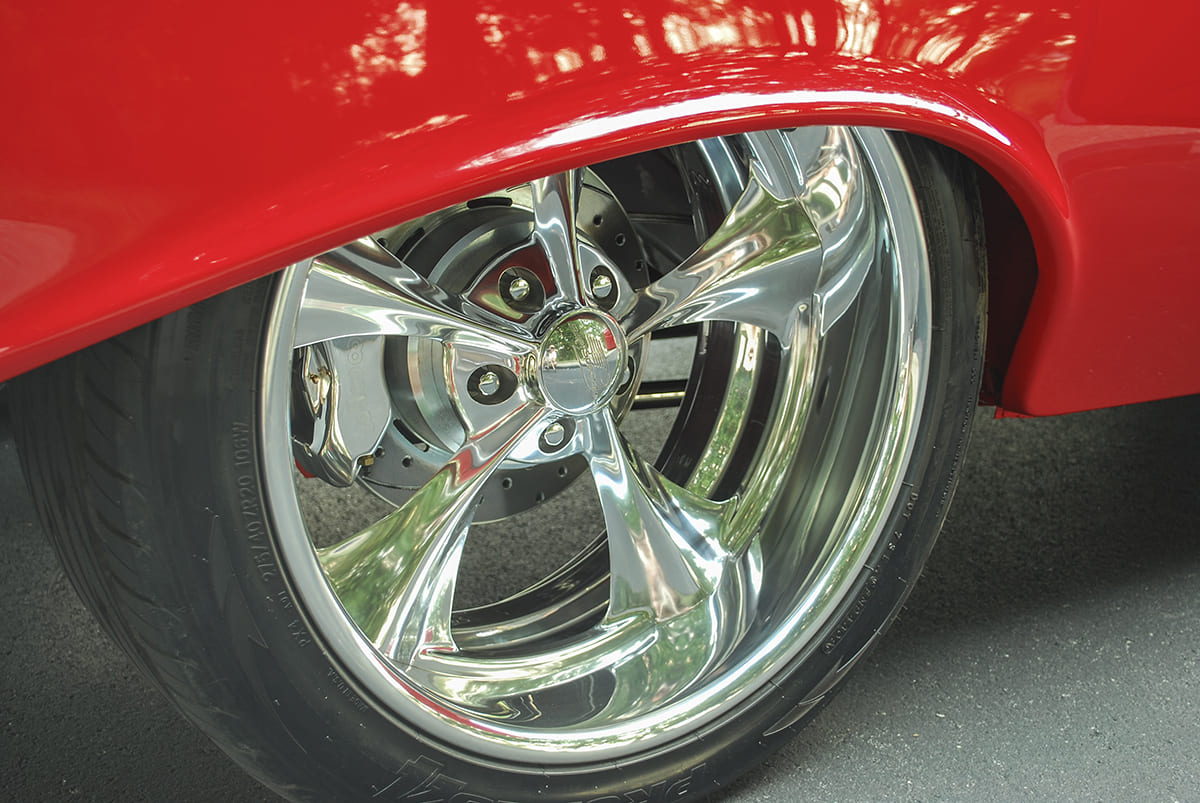 The Chevy rolls on a set of Billet Specialties Dagger wheels, measuring 18×7 up front and 20×10 out back. Power reaches the 275/40R20 Toyo rubber via the Moser 9-inch rearend, which features a 3.70 gearset, a limited-slip differential, and a pair of 31-spline axles. The original leaf springs are long gone, in favor of a four-bar suspension with QA1 coilovers. Robert also gave the car an awesome Wilwood braking system, made up of huge rotors, clamped by polished aluminum four-piston calipers on all four corners. 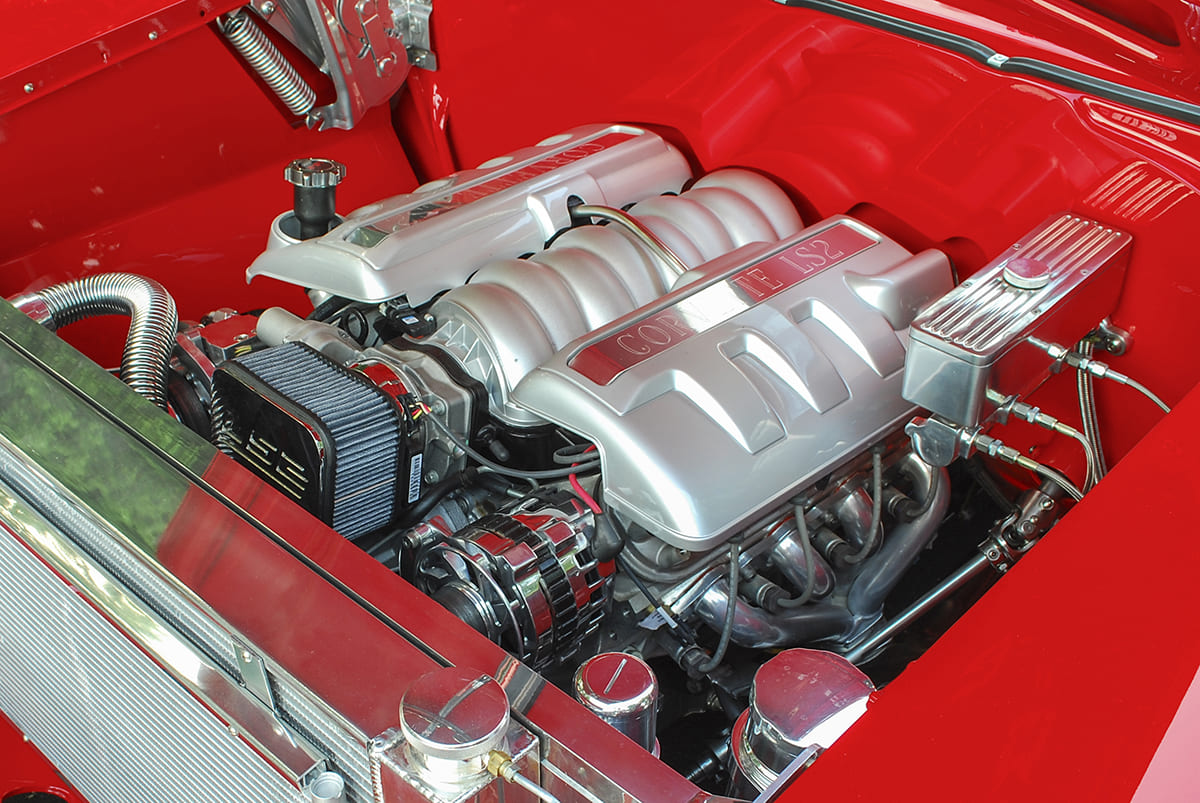 Originally, Tri-Five Chevys featured mounts on the front of the engine and a mid mount that attached to the bellhousing, so swapping in a late-model engine usually requires a bit of fabrication. The new chassis came from Fatman with the new mounts and crossmembers in place, so Robert simply dropped the Street & Performance LS2 crate engine into place and bolted it up. The engine displaces 6.0 liters (364 ci) and features an all-aluminum construction. Right out of the box the LS2 makes 400 hp, so Robert didn’t feel the need to modify it internally.

A steady flow of fuel comes from the polished aluminum tank made by Rick’s Tanks, while air enters the engine through a Street & Performance air cleaner. Outgoing air passes through a set of Sanderson headers before entering the 2-1/2-inch exhaust system, complete with MagnaFlow mufflers. Behind the LS2 is a 4L60E automatic transmission, which also came from the folks at Street & Performance. An aluminum driveshaft connects the overdrive transmission to the rearend. 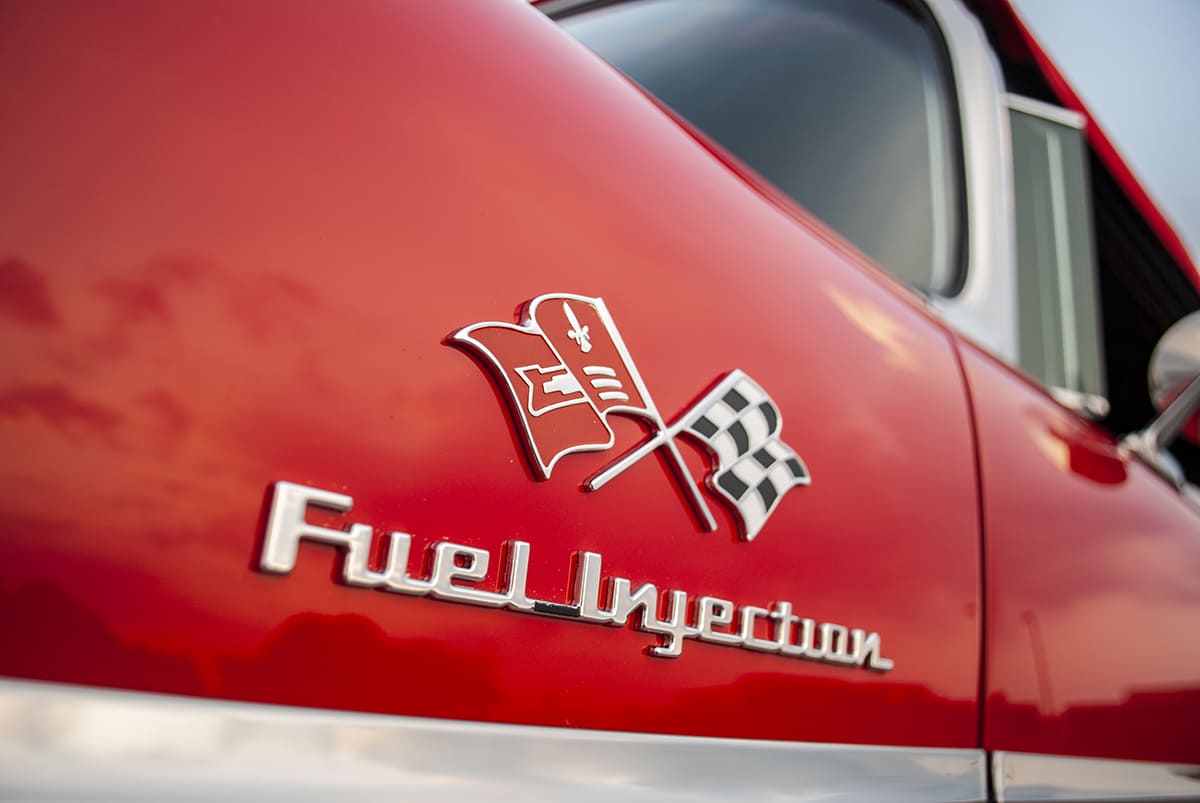 The main area of focus for Robert and the crew at ASR were the car’s body panels. Since the body was severely rusted inside and out, the crew sandblasted it and observed the damage afterward. The final verdict was to replace the entire lower portion of the car, including the floorpan, trunkpan, and inner fenderwells. Also on the replacement list were the quarter-panels, doors, hood, and firewall, so you get the picture. Countless hours of metalwork restored the classic body and Robert relied on Woody Myers to straighten the panels in preparation for paint. After the initial bodywork was finished, several cycles of block sanding and priming removed all of the imperfections.

When the body passed Myers’ approval, it was treated to a coating of Axalta Viper Red, applied by Kool Kolors Rod & Custom of Clinton, Tennessee. Several coats of clear gave the crew plenty of material to work with, and they sanded, buffed, and polished the fresh finish to perfection. Every square inch of the Bel Air body is slick and the quality workmanship continues into the interior where red leather is the key ingredient. Steve Holcomb handled the upholstery work at his shop Pro Auto in Knoxville, Tennessee. 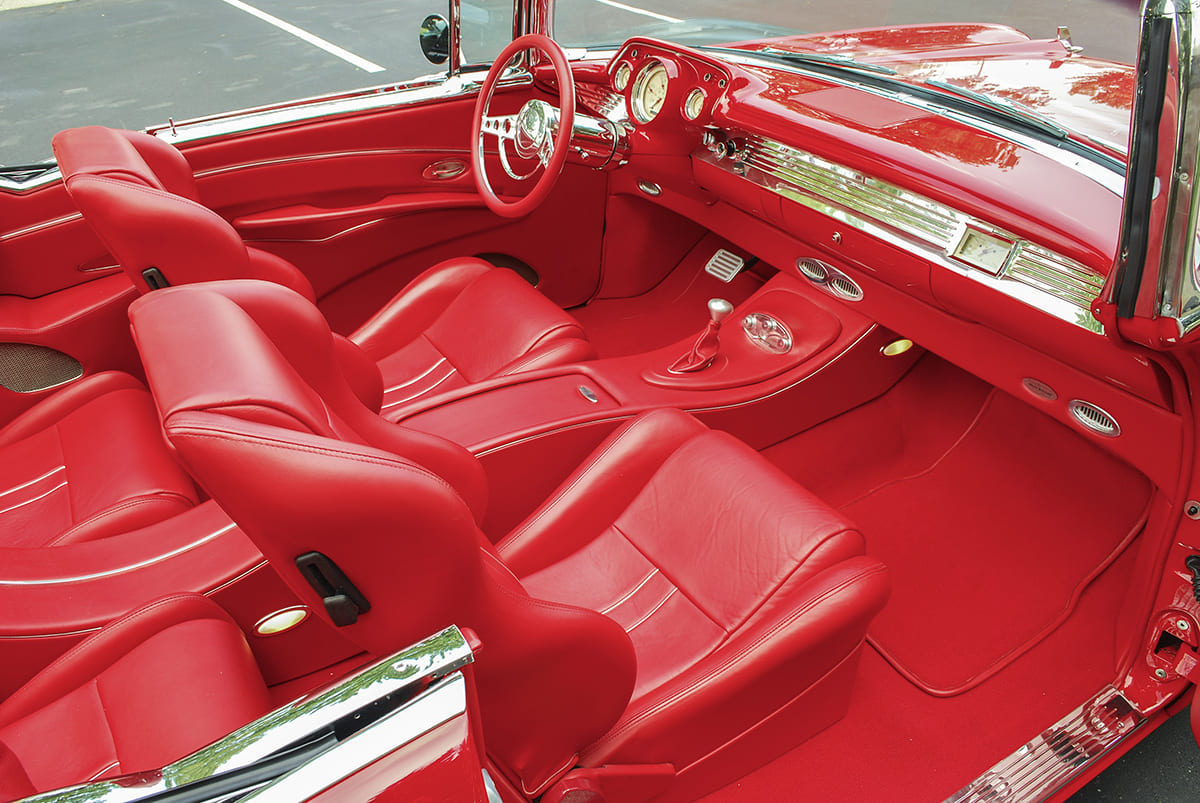 Custom bucket seats ride in the front and rear, with a custom console stretching from the top of the rear seats to the dash. The power window controls and parking brake are hidden in the console, which feature tons of cool trim and accents. The Vintage Air vents reside below the dash in a custom-upholstered panel, while the controls can be found just in front of the Lokar shifter. The hand-formed door panels offer clean and modern styling, while the Secretaudio system is hidden within the interior. Beneath the decklid, you’ll find more awesome stitchwork, as the trunk is boxed in and upholstered to match.

With a high level of detail, and a killer overall look, it’s hard to pass up Robert Carter’s creation. Whether the car is sitting still or cruising down the boulevard, Robert has fun with his revitalized 1957 Chevy. One year of hard work saved a rotting ragtop and resulted in an awesome pro-touring car with timeless style and great performance. 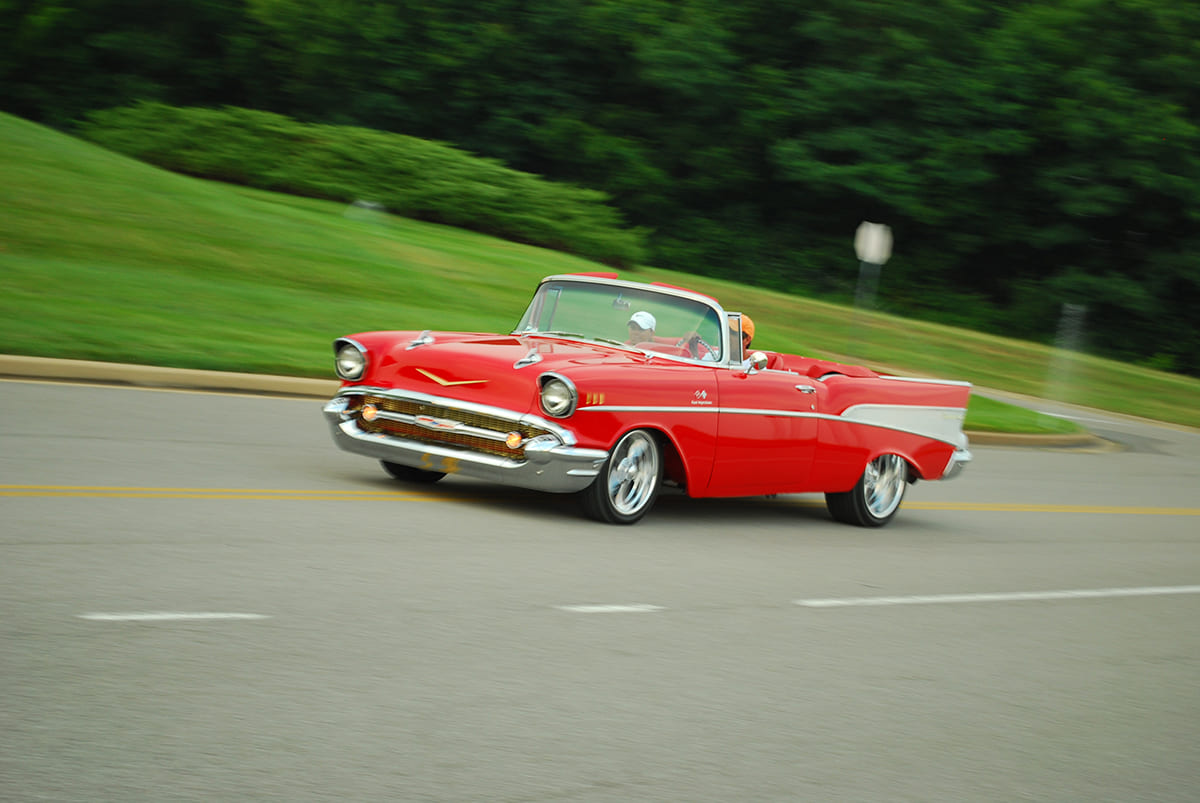