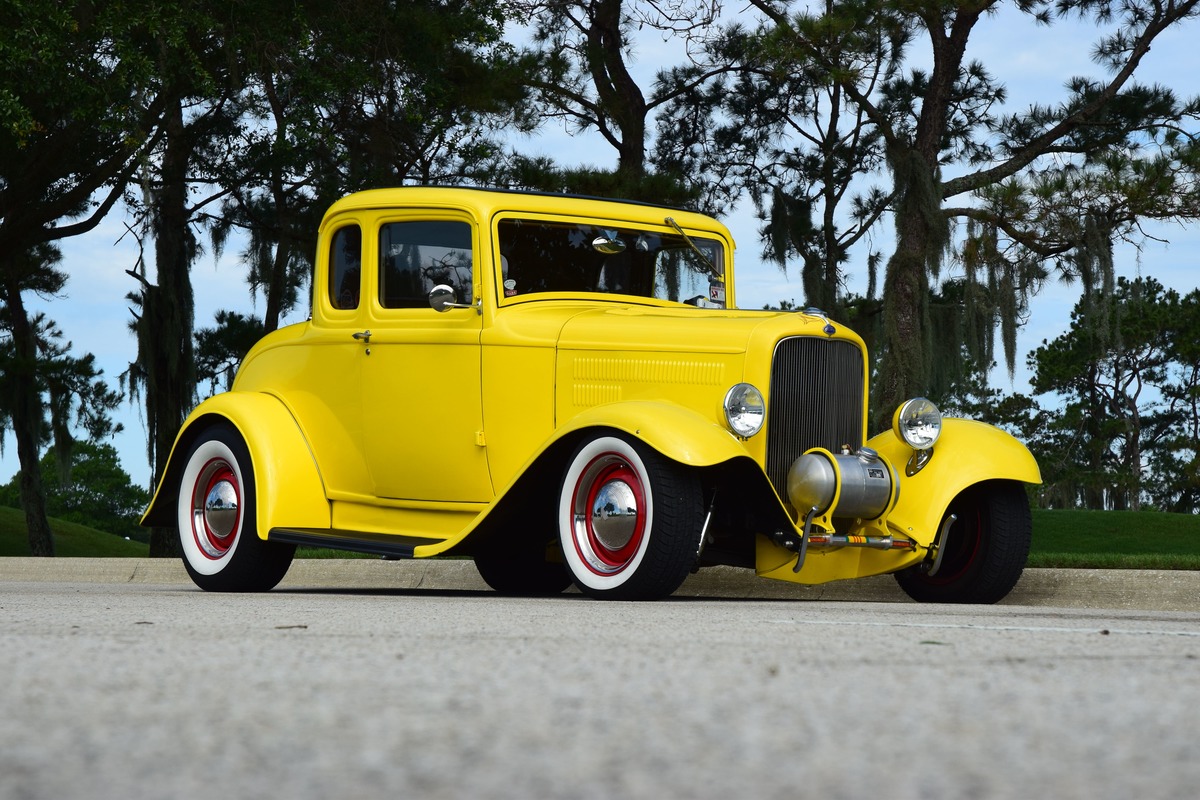 Built originally by Ford Motor Company back in 1932 it was turned into a hot rod back in the ‘60s and has remained so until this day.

Power is supplied by a 1955 Chrysler Fire Power 331 cubic inch Hemi fitted with Jahn’s 10-1/2:1 pistons, Clay Smith cam, Hot Heads four barrel carb manifold with a 570 Holly street avenger carb, ceramic coated original exhaust manifolds, Mallory fully mechanical advance distributor with PerTronix ignition module and it’s cooled by a Walker four row radiator. Modern upgrades to the engine include a big-block Chevrolet water pump, GM alternator, Chrysler 360 starter and a spin-on oil filter. These are all parts that can be purchased at any local auto parts store. The engine was rebuilt 12 years ago and has approximately 24,000 miles on it.

Up front on the boxed frame is a 2-1/2-inch dropped 1932 I-beam axle mounted with a Pete & Jakes four bar setup. The front disc brakes and steering box are from a 1967 Mustang. A GM TH400 transmission and 8-inch Ford rearend with parallel leaf springs complete the driveline. It’s riding on new 15-inch Wheel Vintique wheels fitted with small hubcaps and beauty rings and new big and little Goodrich white walls. The gas tank is a 20-gallon aftermarket replacement with a three-gallon Moon tank mounted on the front and it’s fully functional and used as a reserve tank.

In 1994 the body was bead blasted and all bodywork was repaired at George Barris Kustom Industries. During the stripping process it was noted that this car had been painted various shades of yellow on four different occasions. Barris then primered the car with red oxide and I drove it that way until 2003 when it was again painted in PPG Lemon Ice (yellow). As progress was made on the car, Barris provided photos and letters documenting the repairs that were being made.

Modifications to the body include custom made Nerf Bars (front and rear), 1934 Ford headlight stands, 1937 Ford taillights, and it has a working cowl vent. Von Dutch style pinstripes add an old school look to the car.

This is not a “trailer queen”, as she’s a “real hot rod”. You can get in, turn the key and drive it anywhere. Like the old saying goes, “If you see this car on a trailer, call 911 because it’s being stolen”.   MR