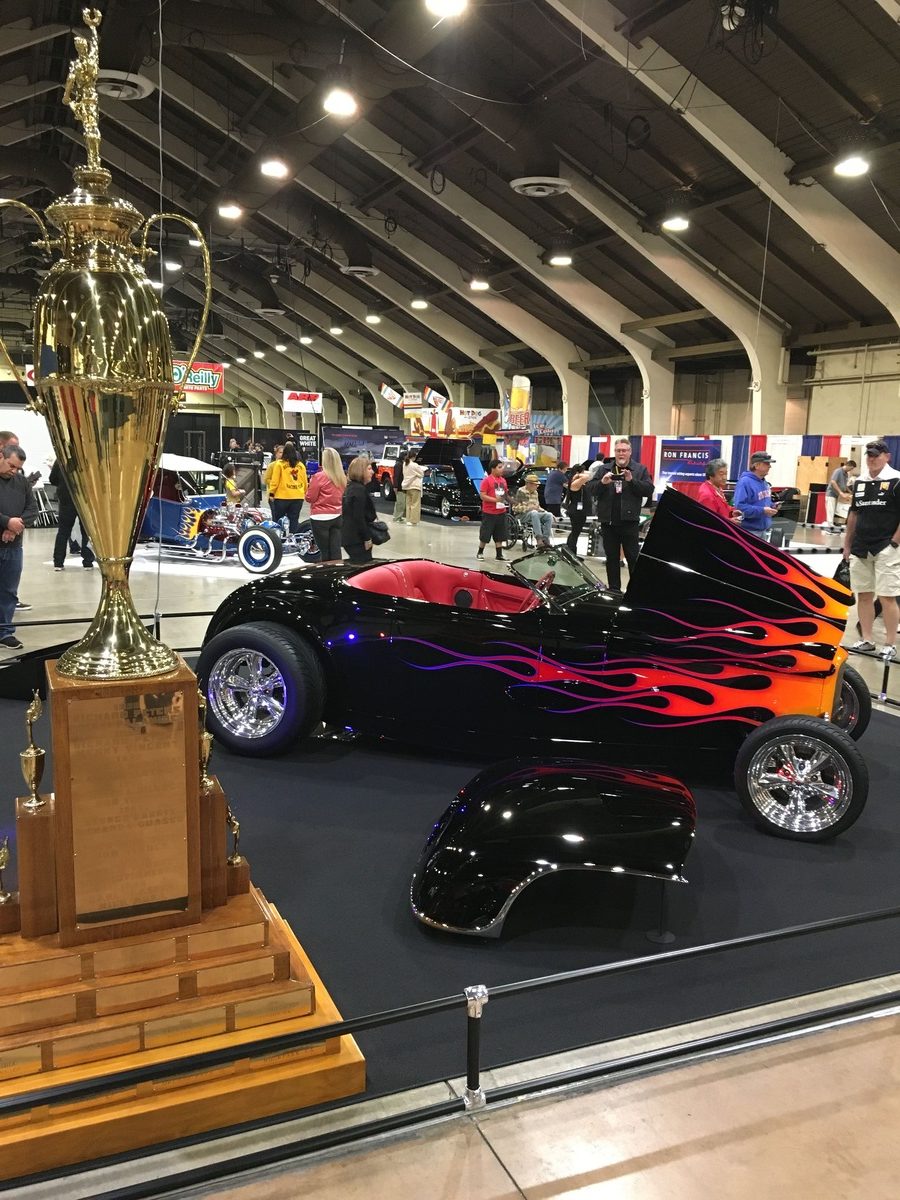 Four Letters That Tell a Story … America’s Most Beautiful Roadster 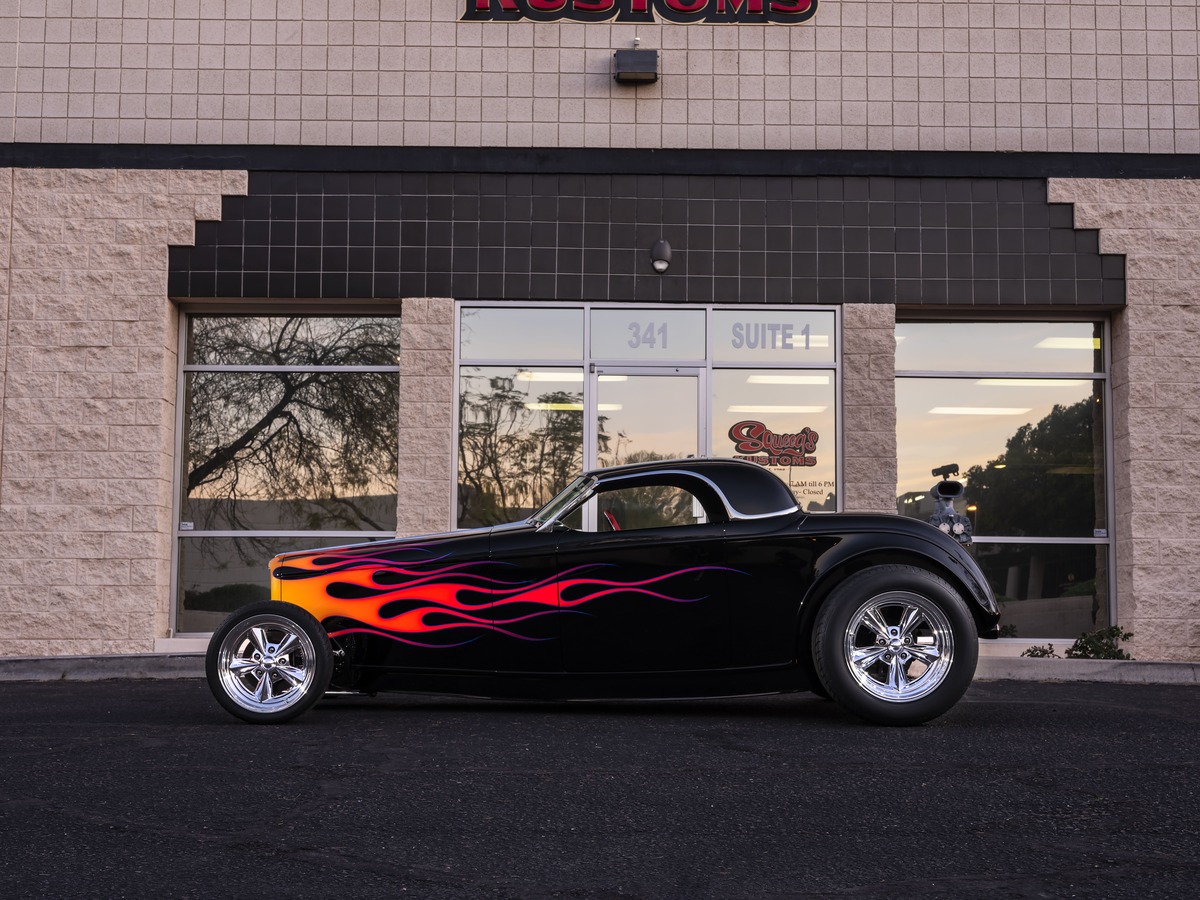 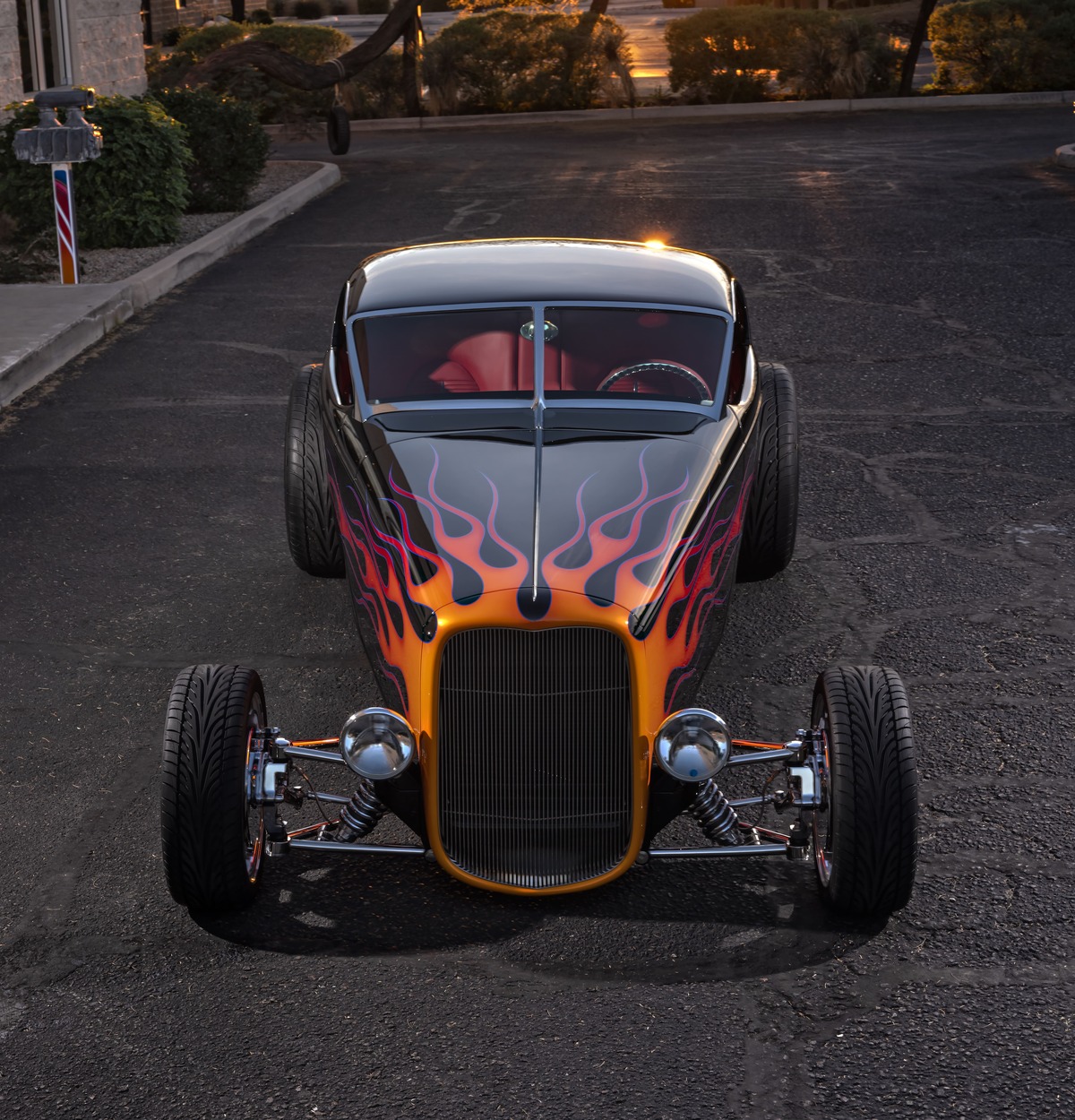 This year was the 70th America’s Most Beautiful Roadster (AMBR) award (correct 70th award and the 71st show) and it went to the 1932 Ford Muroc fenderless roadster owned by Monty Belsham (Houston, British Columbia, Canada) that was reconfigured by Doug Jerger and his crew from Squeeg’s Kustoms in Chandler, Arizona. The 2020 Grand National Roadster Show (GNRS) held at the Fairplex in Pomona, California (17th year at this location) did bring us the latest in the long tradition of AMBR award winners.

(A little history on the GNRS. The show first appeared under the name International Sports Car Show on June 20-26, 1949, and drew 60,183 spectators at a dollar a pop. Resulting from the immense public interest to the roadsters, Al and Mary Slonaker, the originators/owners/promoters, opted to change the show’s name to the National Roadster Show in 1950. It was then that the perpetual AMBR 8-plus (now 9-plus) foot trophy was first handed out to Bill NieKamp for his 1929 Ford highboy roadster. It’s also been reported that the original name for the award was “Most Beautiful Roadster” and that the word “America’s” was added sometime later. The show’s name was changed in 1962 when the word “Grand” was added, giving us what we all know as the Grand National Roadster Show. It was also during the early days that the show went by its street moniker, The Oakland Roadster Show. Slonaker created an award for non-AMBR contenders that exhibited expert craftsmanship and superior engineering. Soon after he died in 1975, the award was renamed in his honor. The Al Slonaker Memorial Award was bestowed, and its reputation was elevated this year through a new corporate sponsor Automotive Racing Products, or ARP as it’s known to hot rodders everywhere. Part of their commitment is to supply a newly designed perpetual Slonaker trophy and a check to the winner for $12,500—the same amount as the show’s prestigious AMBR award, also ARP sponsored.) 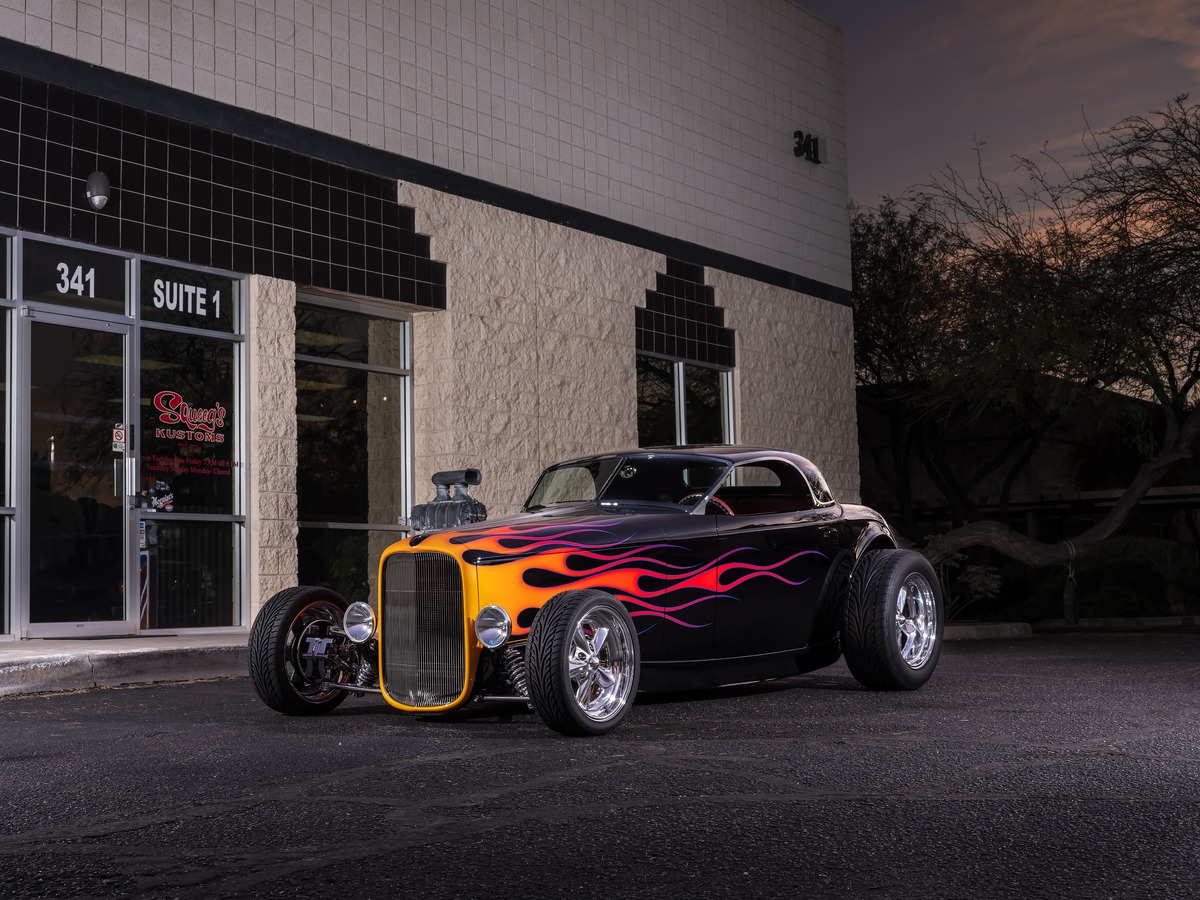 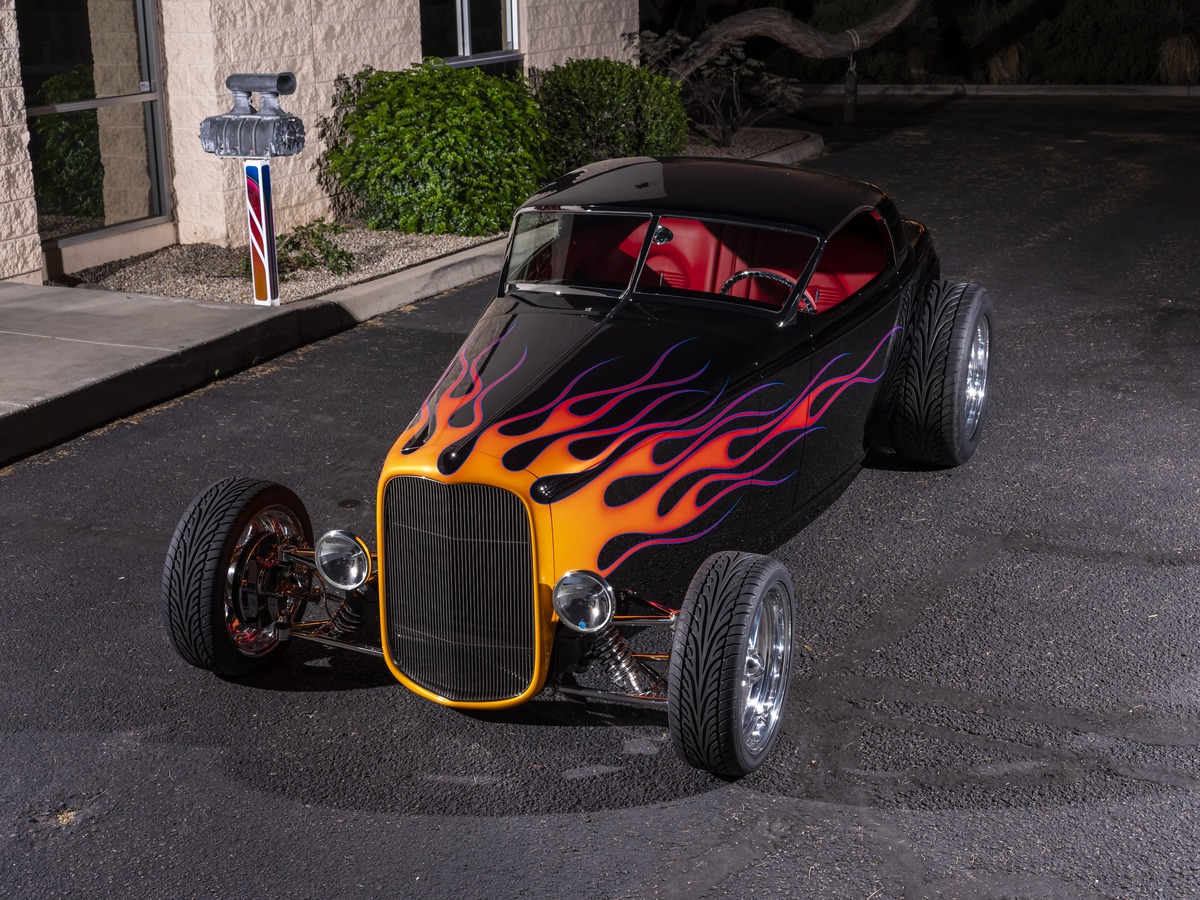 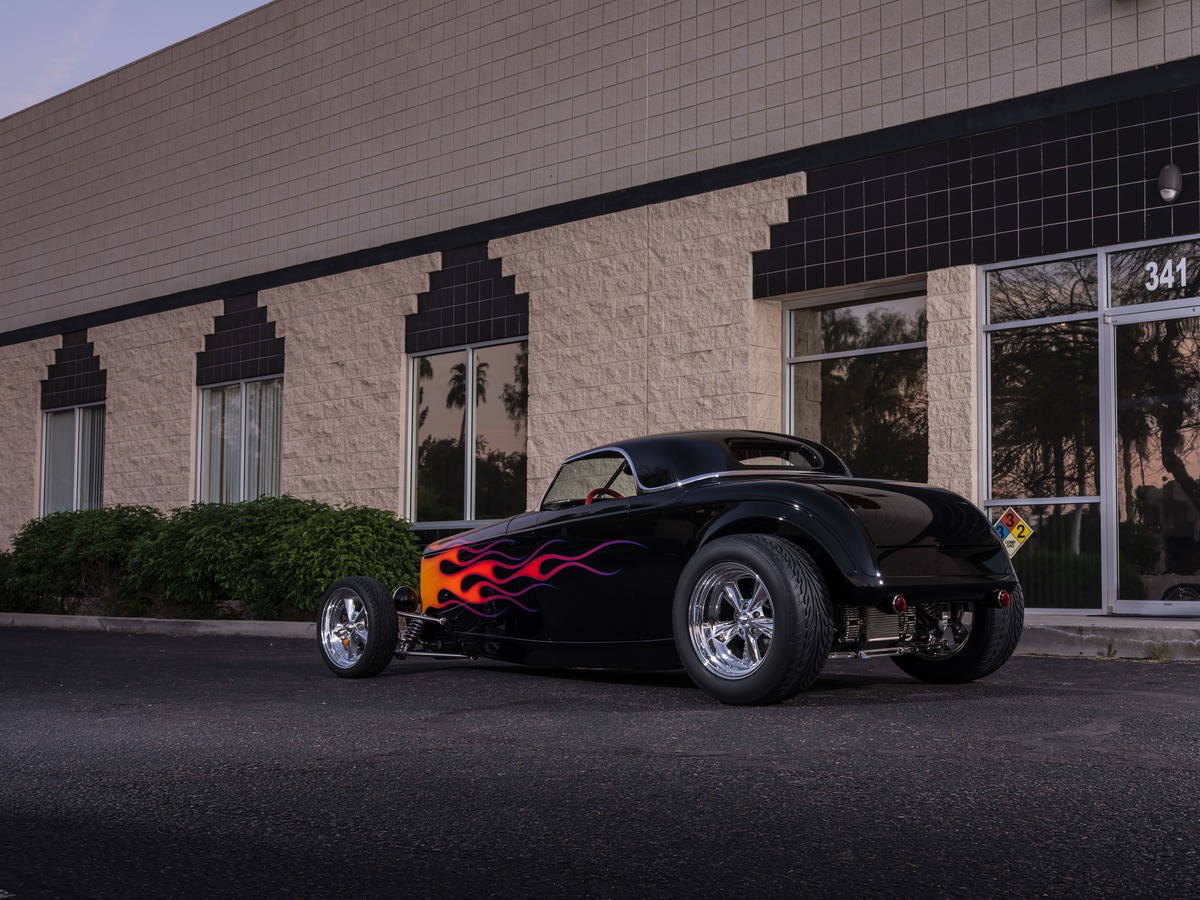 Back to the story at hand. Unlike most previous AMBR winners, this year’s roadster enjoyed a former life. It began as a handcrafted Kugel Komponents Muroc steel-bodied roadster, #4 of the 10 highboys originally built. Marcel’s Custom Metal Shaping produced the fendered and non-fendered Muroc roadsters for Kugel Komponents. At the roadster’s inception Nick Barron purchased the body from Kugel and enlisted Angie’s Auto Center to complete the build while Mike’s Street Rods handled the original body- and paintwork.

It was from here that Monty caught sight of the roadster and knew he wanted it … but there would be changes—lots of them! The car exchanged ownership a few times and, in the process, it was “driven” (nothing wrong with that!) and began to show some signs of wear and tear. Once Monty parked it in his garage it was off to Squeeg’s Kustoms where he and Jerger sat down and mapped out a plan that originally didn’t include going for the AMBR. However, plans, as life, have a way of changing. 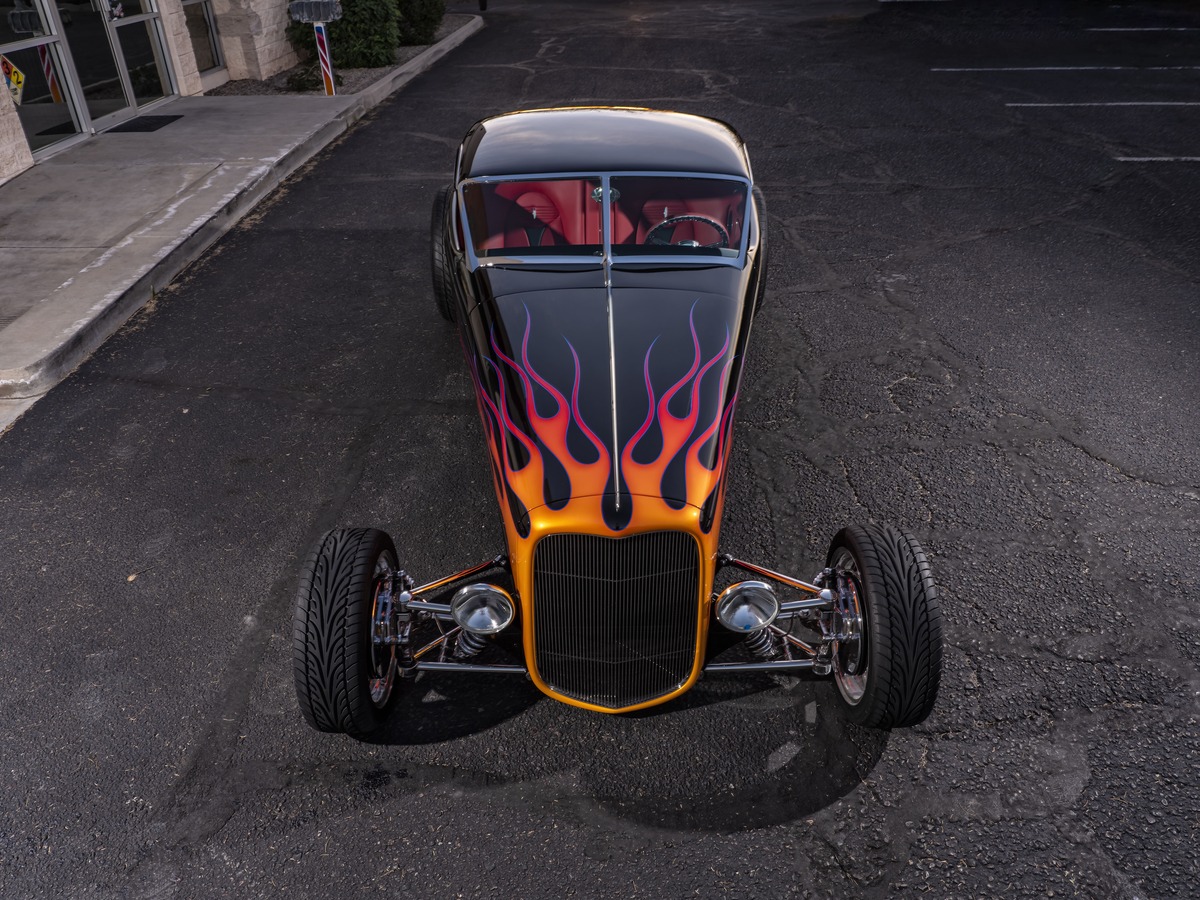 The roadster lacked flames; however, this was a “must have” for Monty (he will tell you that everything he has is flamed) and it was around this premise that the rebuild began. Immediately the cockpit was extended 3 inches by moving it rearward toward the decklid to better fit Monty. He also wanted a removable hardtop, which is where Matt Tomb (also from Arizona) came into the picture as he fabricated the one-off top. The handmade top is shaped out of aluminum and features a 3/8-inch chrome trim around its perimeter. To properly fit the top, the craftsmen at Squeeg’s had to modify the windshield. 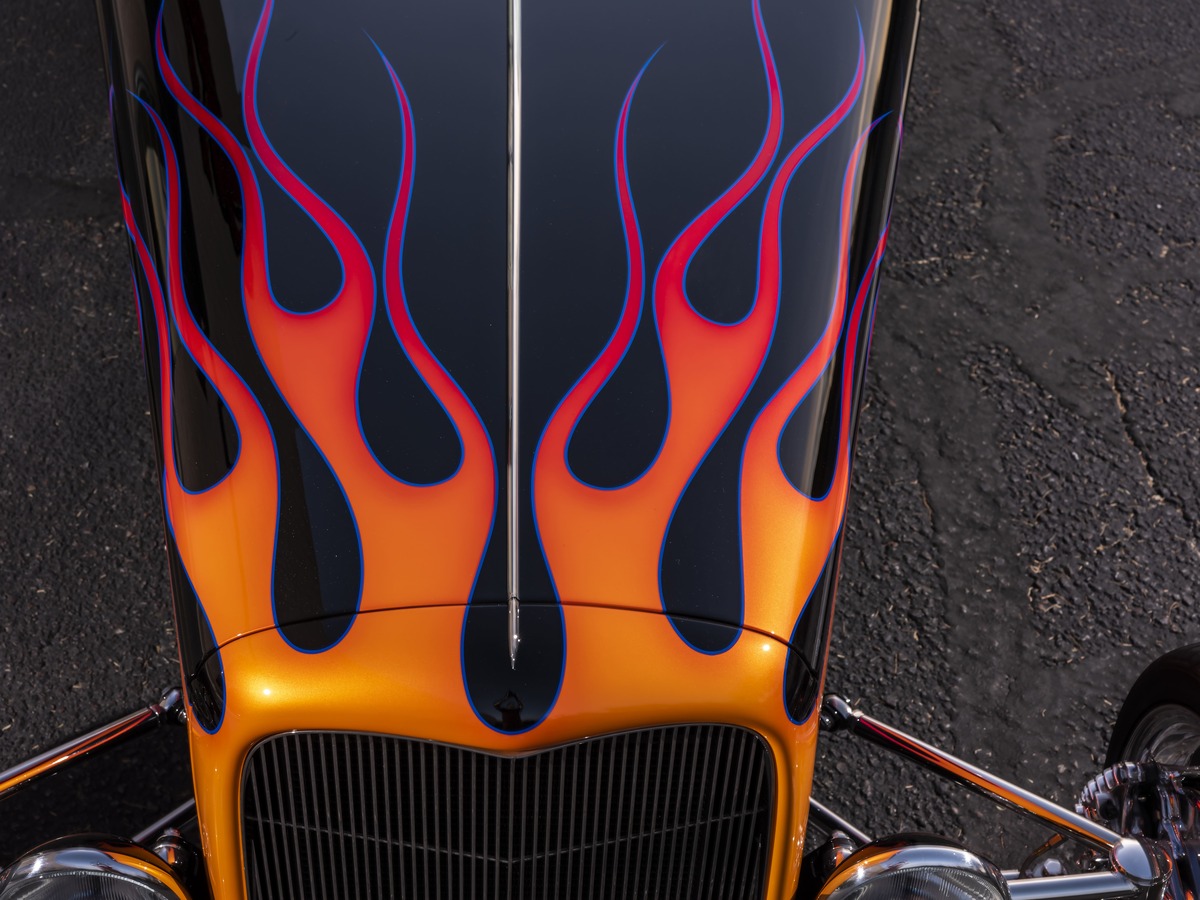 It should be noted that the roadster was taken down to literally every last nut and bolt and then reassembled after the noteworthy changes, such as the use of 1937 Ford taillights, leading to fresh body- and paintwork, all handed at Squeeg’s. The roadster was repainted using PPG black with orange and red flames, featuring candy pink tips over white pearl “licking” rearward from the grille shell (which features a Dan Fink insert) as they flow just past the doors. Look closely and you will see flames spreading rearward on the underside of the hood … more detail. The flames were precisely laid down by Jerger while Moose (also Squeeg’s) handled the expertly sprayed-on black. 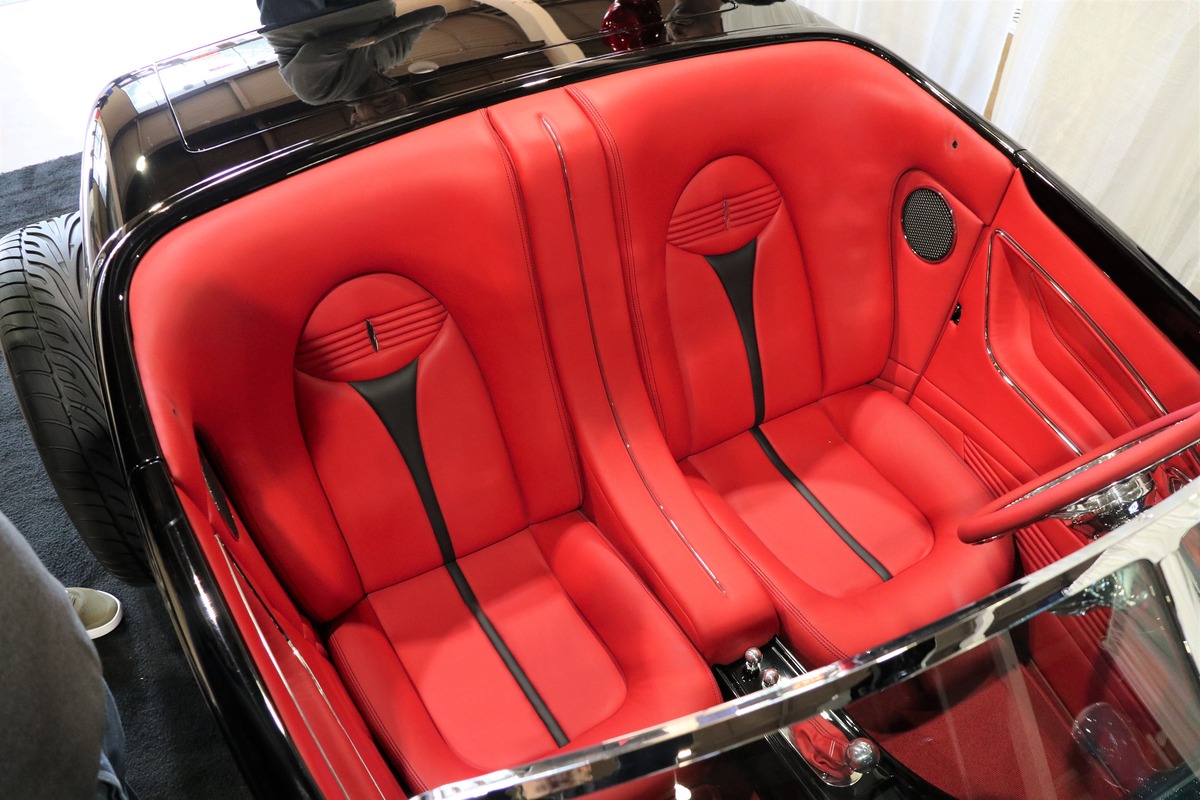 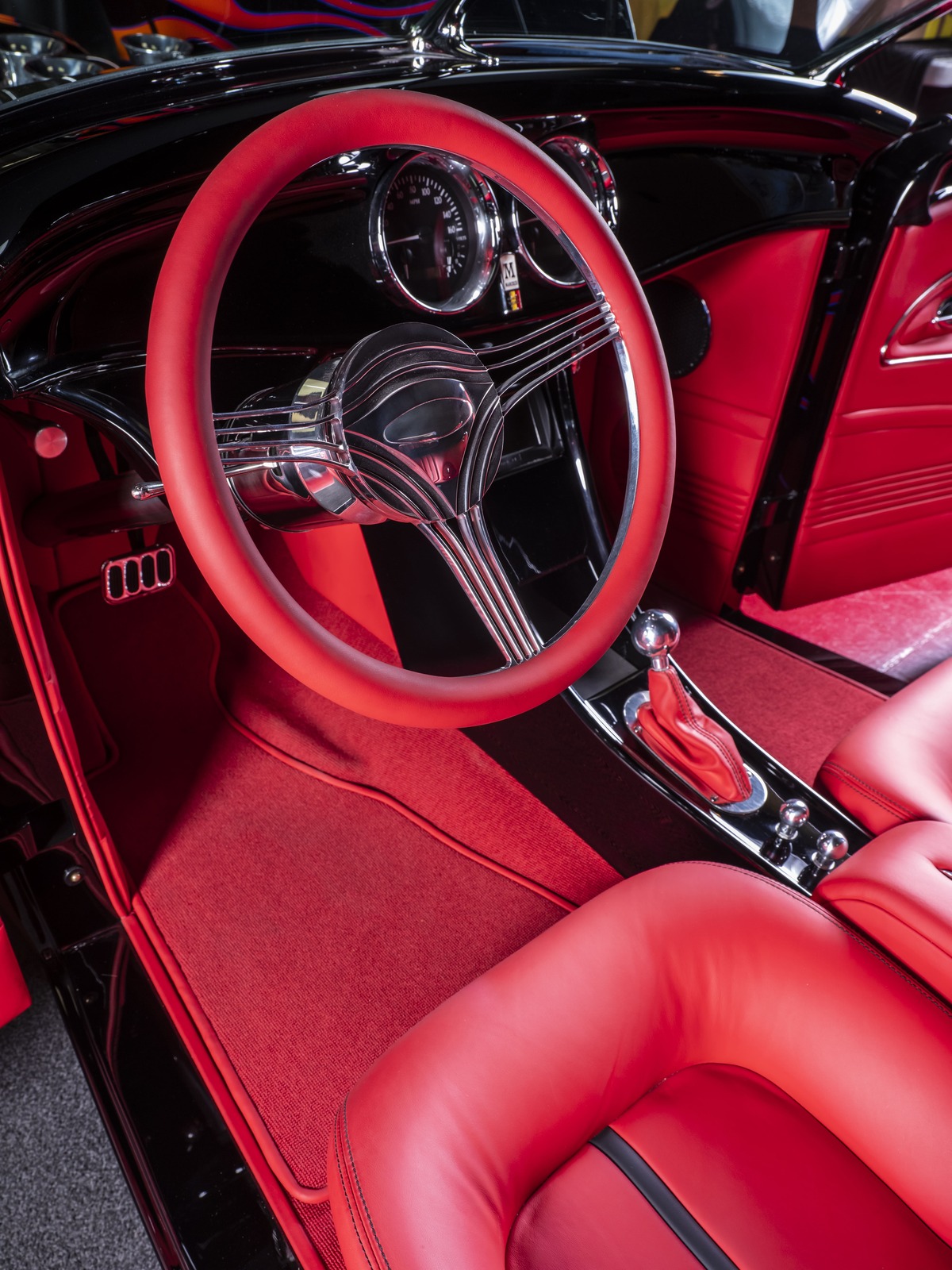 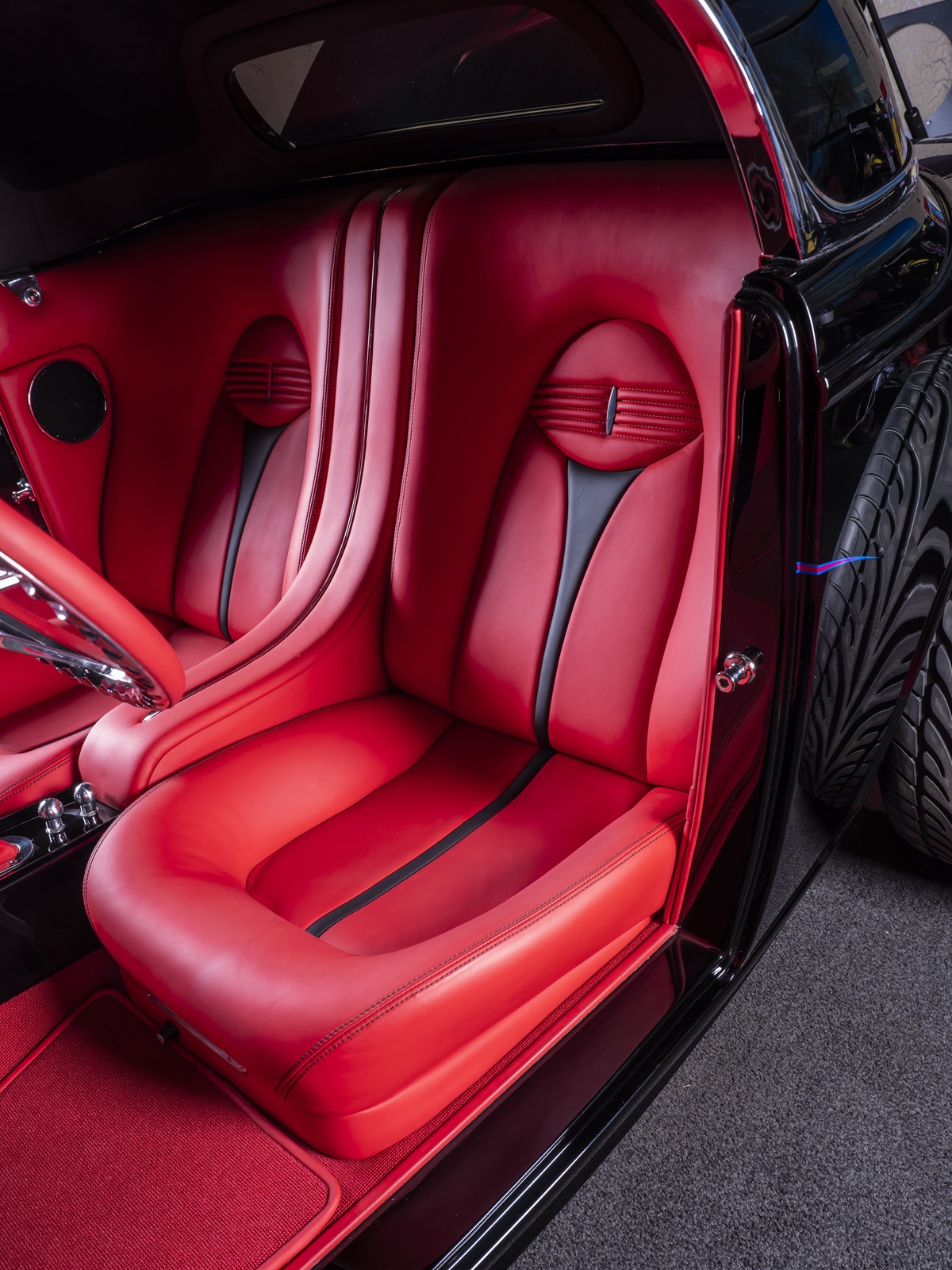 Since we are hanging around the interior it should be noted that the “lipstick red” leather was stitched by Gabe Lopez at Gabe’s Street Rod Custom Interiors. The bucket seats and center console provide the roadster with more of a distinctive appearance, keeping with its blend of traditional and contemporary. Mentioned earlier, the reason the cockpit was extended was to make room for Monty; in this effort, he traveled several times to Gabe’s for precise fittings. Other interior appointments include the Dakota Digital analog gauges with a hint of digital and an ididit tilt-steering column topped with a Budnik vintage-appearing banjo wheel. The center console houses the custom shifter as well as a digital readout. It should also be noted that when the hardtop is in place rear visibility is compromised. Hence, the digital screen in the center console is for the rear viewing camera, giving Monty visibility he otherwise wouldn’t have. Linking all the electrics, inside and out, is an American Autowire fuse panel and wiring, while such items as the pedal assembly remains from the original Kugel system. Speaking of the pedal system, it operates the disc brakes that rest behind a set of Colorado Custom (now considered old-timey) wheels measuring 18×10 and 16×6 with Dunlap 285/50R18 and 195/40R16 rubber. 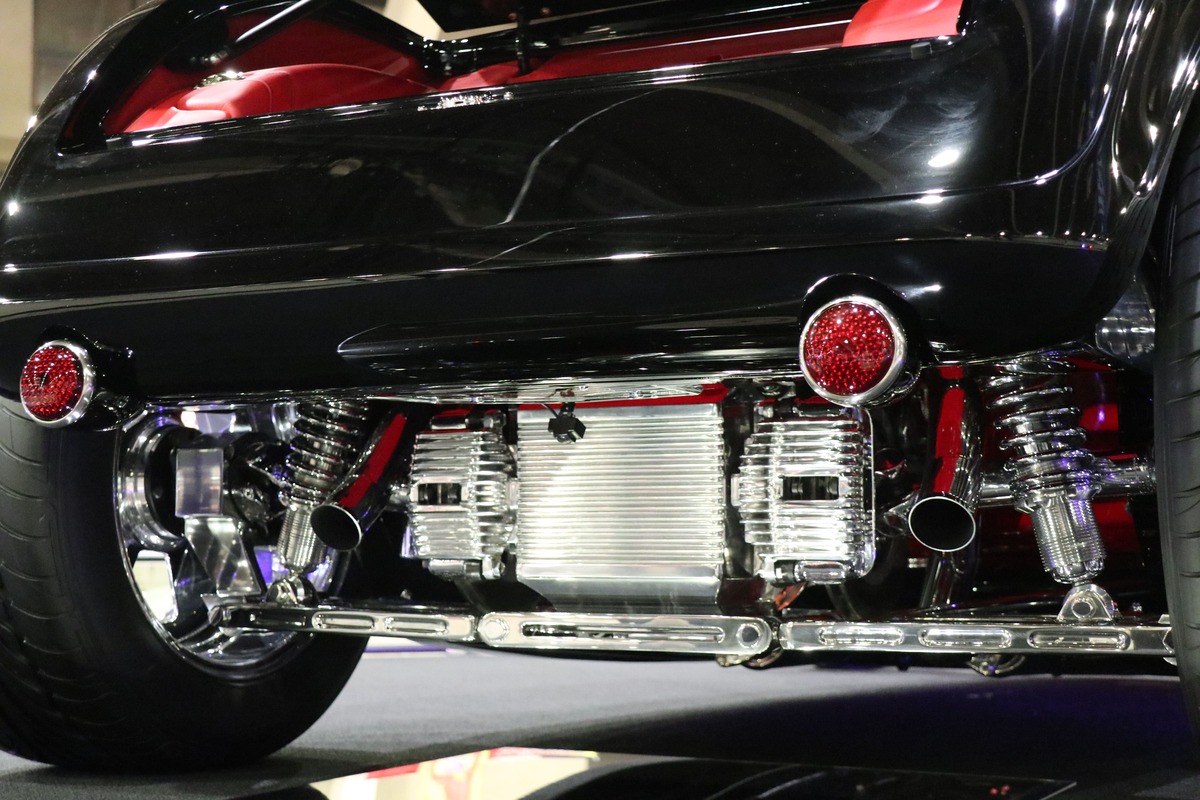 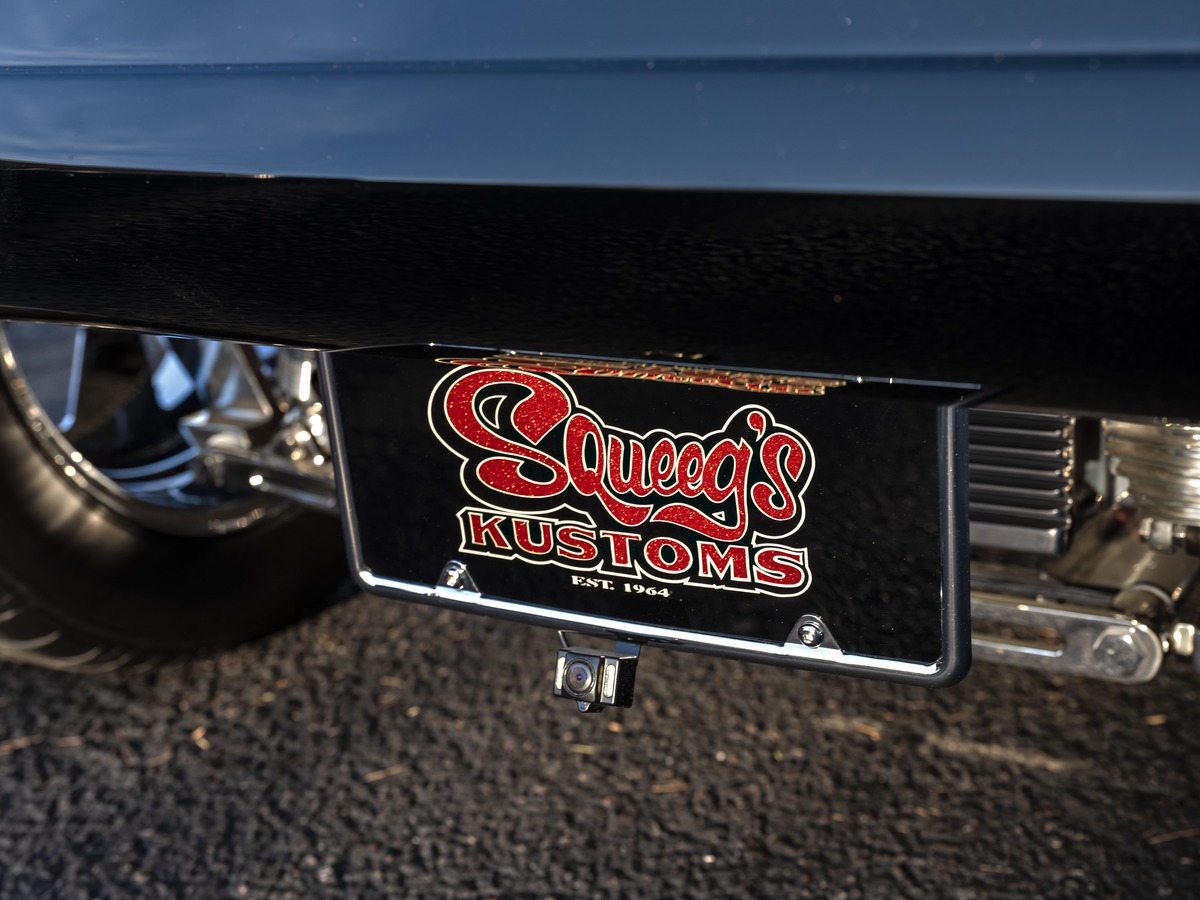 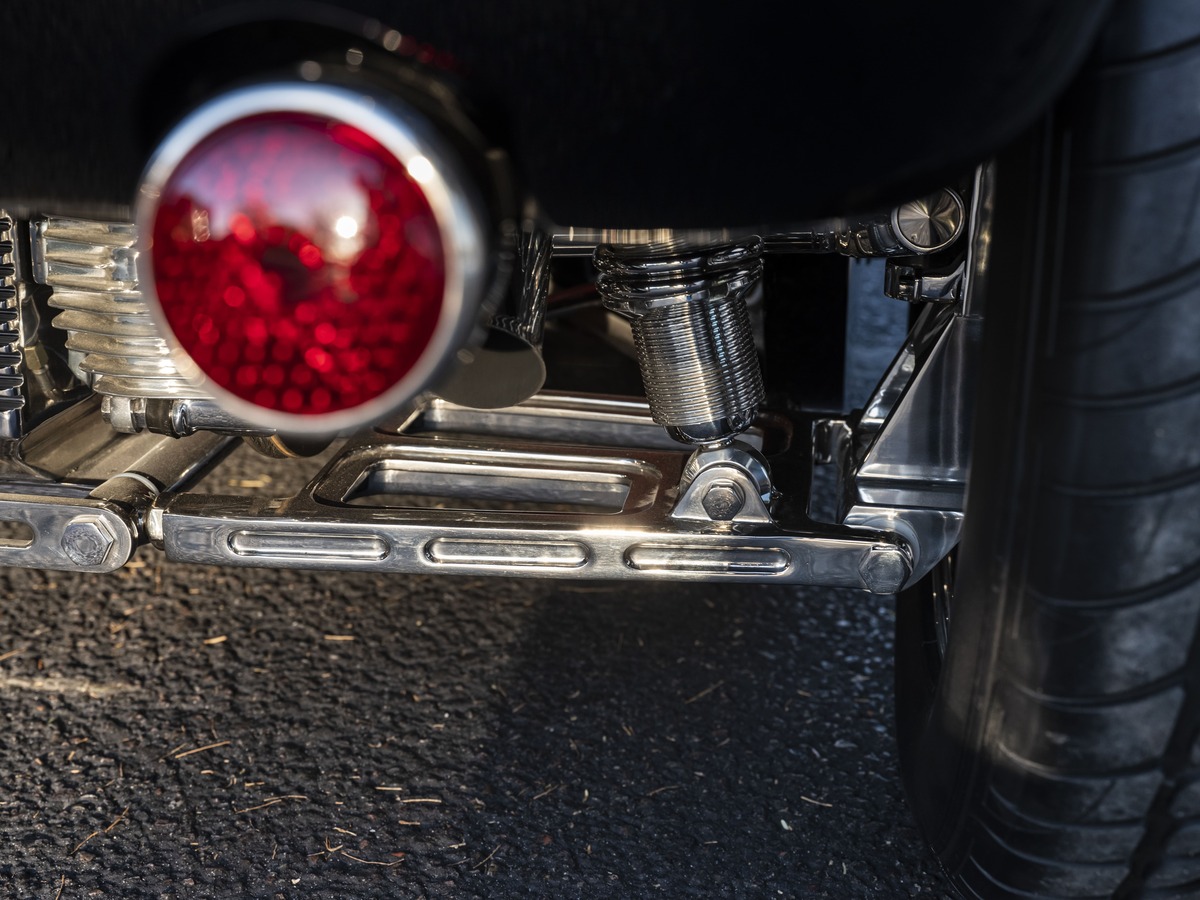 The Kugel chassis, which the roadster sits on to this day, features Kugel IFS and IRS that’s outfitted with coilover shocks and Corvette brakes at the corners. Nestled between the Kugel custom framerails is the powertrain based around an LS1 with Hilborn-stacked EFI that utilizes a Holley CPU. The V-8 is then matched to a 4L60E tranny that spins the horsepower back to the Kugel IRS. As one would expect, a roadster competing for the AMBR would feature copious amounts of detail and it’s stunning throughout. The engine itself is loaded with lots of highly polished aluminum by way of Russel’s Custom Polishing. When it came to achieving brilliant brightwork, the tip of the cap went to the “keepers of the tanks” at Ogden Chrome.

The GNRS, a household name among hot rodders and the longest running car show in the U.S., held its 71st showing back in January. Little did we know our world would undergo such dramatic changes. We are in the midst of adapting but as any good hot rodder knows … we will “endeavor to persevere.” 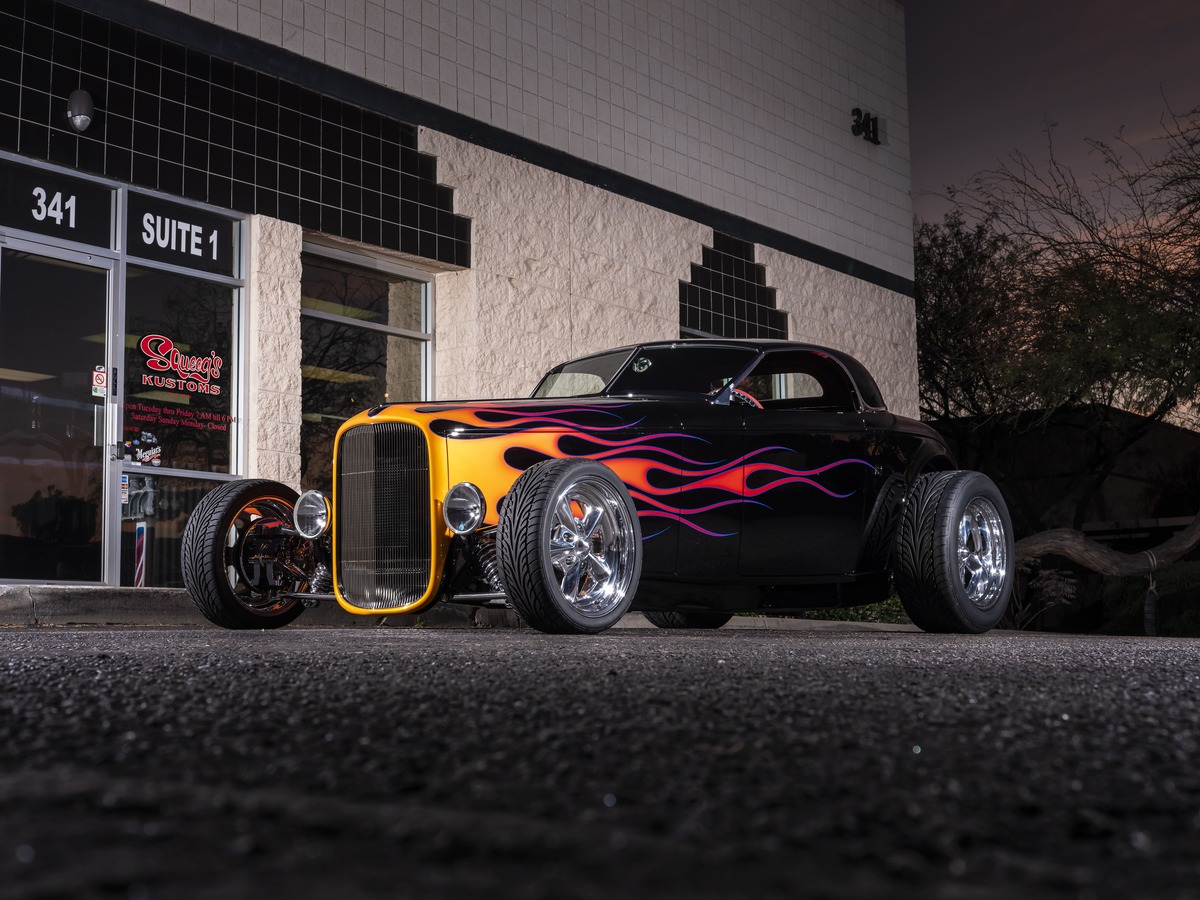 There’s no denying the talent required and the prestige garnered by packing up the replica AMBR trophy, although a “bit” shorter in stature. The perpetual 9-footer is retained by Rod Shows, the event’s promoter. Jerger and crew from Squeeg’s Kustoms are no strangers to the AMBR competition, having taken home the honors once before in 2011 with a 1934 Ford roadster. Who knows, maybe, just maybe, we will see Jerger and crew back again to try one more time! MR