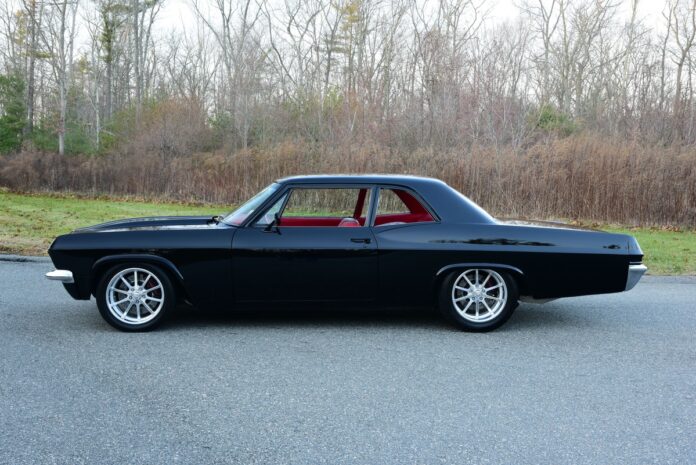 Dave Delancey Brings Plenty of Punch to a Full-Size Chevy 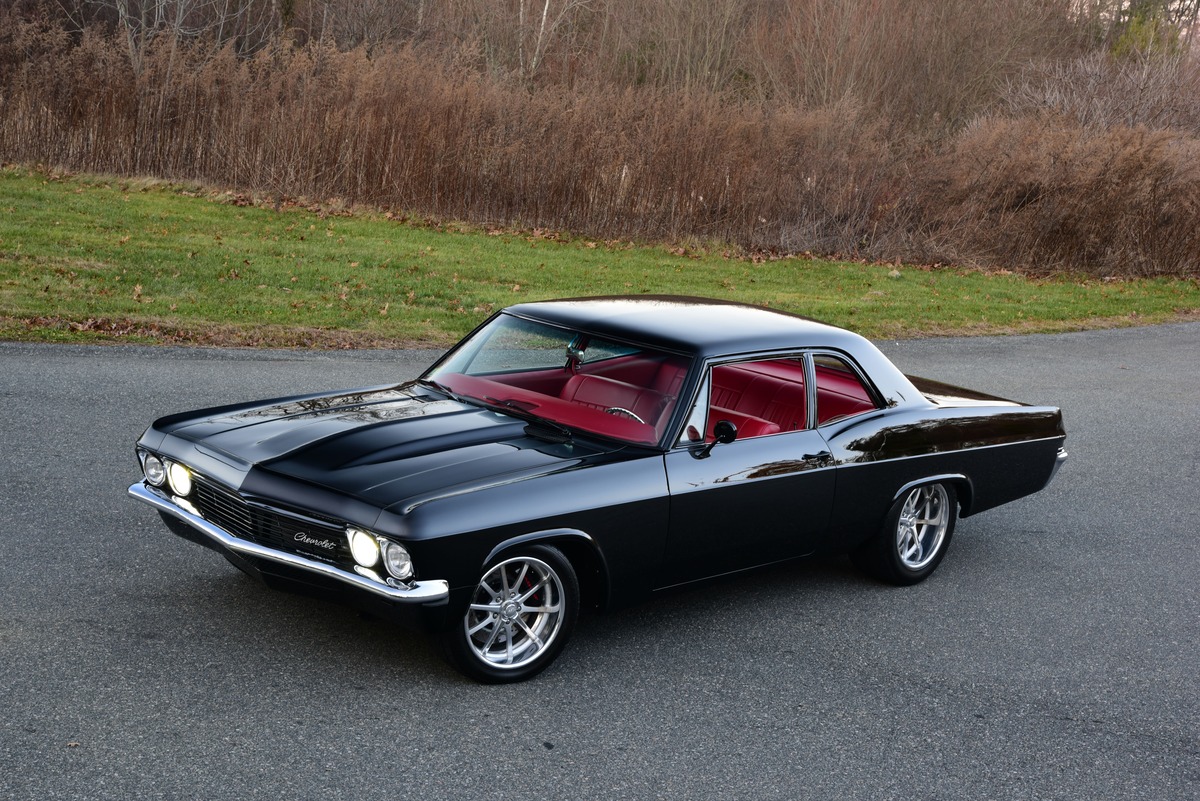 Camaraderie, it’s one of the core values that frames the hot-rodding hobby. Regardless, which decade you grew up in, like minded performance enthusiast have regularly gathered in friends’ driveways, home garages, service stations and even donut shop parking lots to tell tall tales and work on their hop-ups. It didn’t matter if it was to fix something that broke the night before, taking on a driveline swap or simply adding some new jets to a carburetor. In any case there’s nothing like hanging out with your friends while enjoying the hobby.

1965 Chevy Biscayne by Chuck Vranas- Modern Rodding from In The Garage Media on Vimeo. 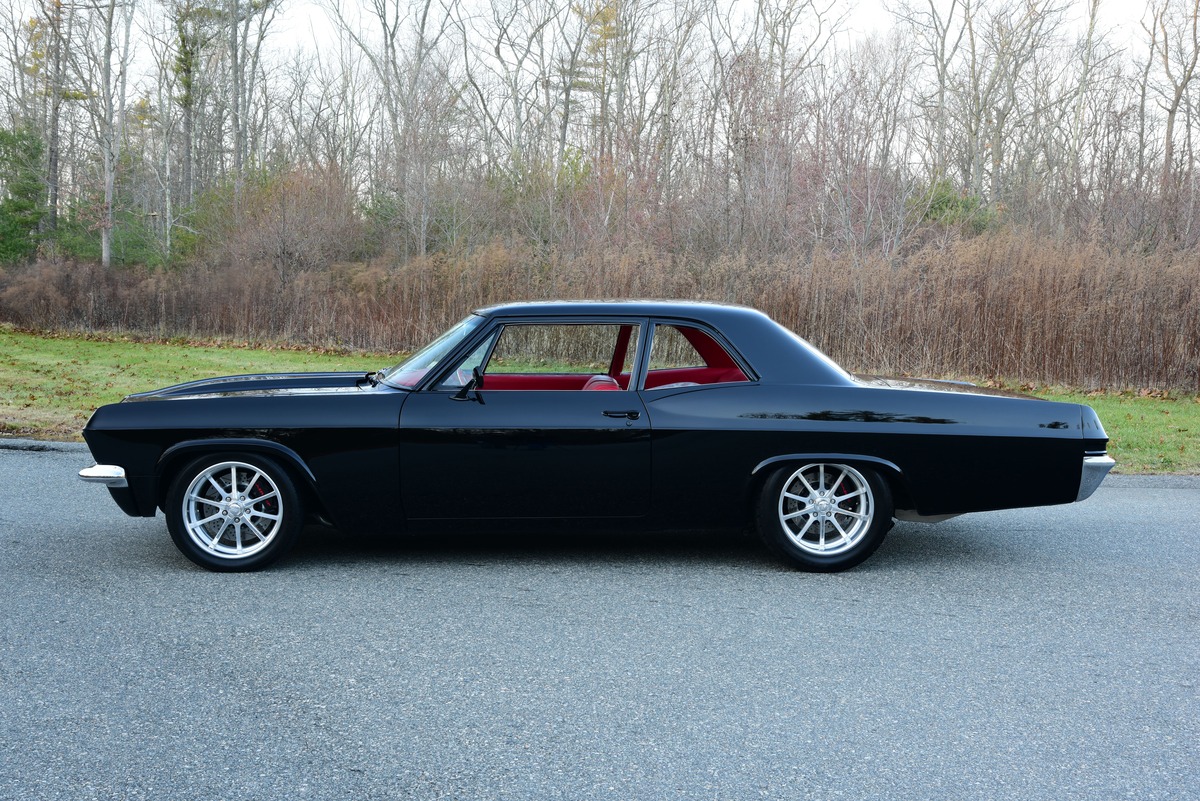 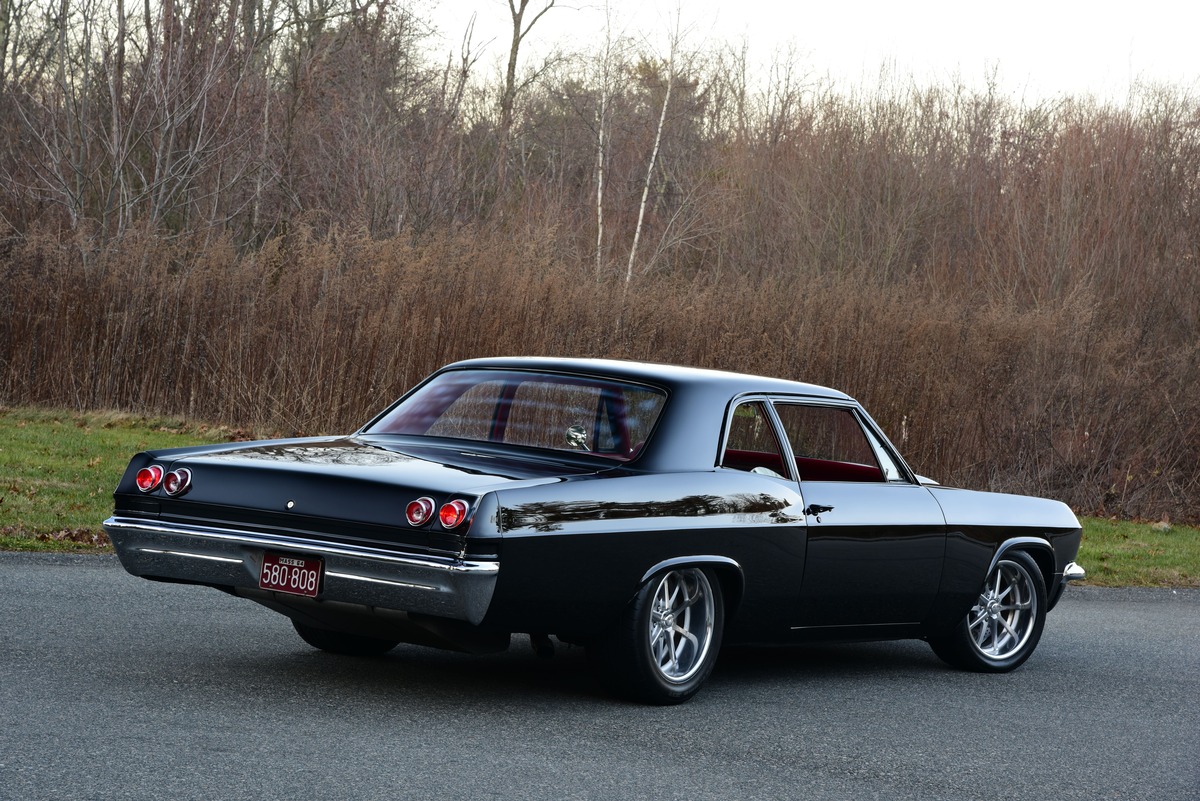 For Dave Delancey of Middleboro, Massachusetts, stepping into his latest build, the wicked cool 1965 Chevy Bel Air across these pages, started with the dream of finally getting into a B-body. He grew up surrounded by cars being worked on in the family shop since his dad was an auto mechanic. This easily led to a passion for Chevy muscle starting with his first ride in a 1967 Chevy Camaro owned by his uncle when he was just a youngster. As the years passed, Dave spent plenty of time spinning wrenches and learning about cars thanks to his older friends, Kevin and Mark Connolly as well as Jim Bishop, who were always deep into muscle car projects. It was helping out on a 1966 Bel Air build in Mark’s shop that finally laid the groundwork for his fascination with full-size Chevy’s. 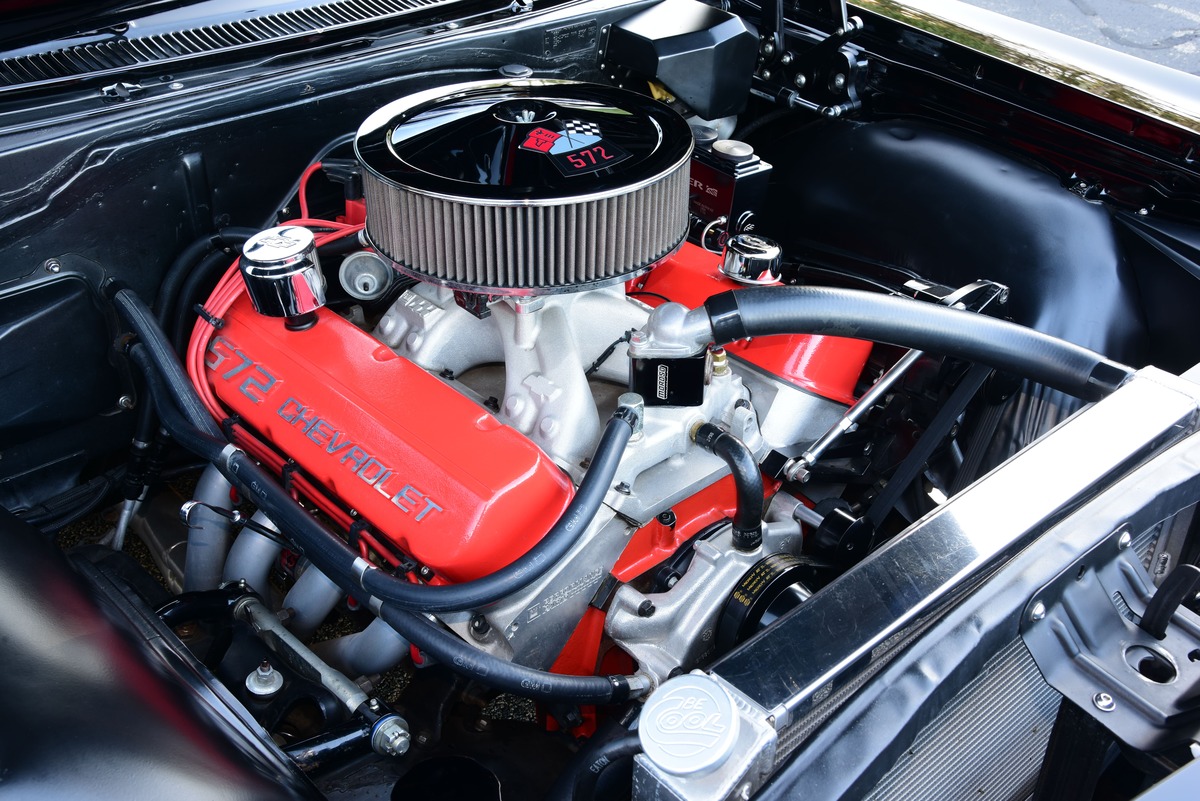 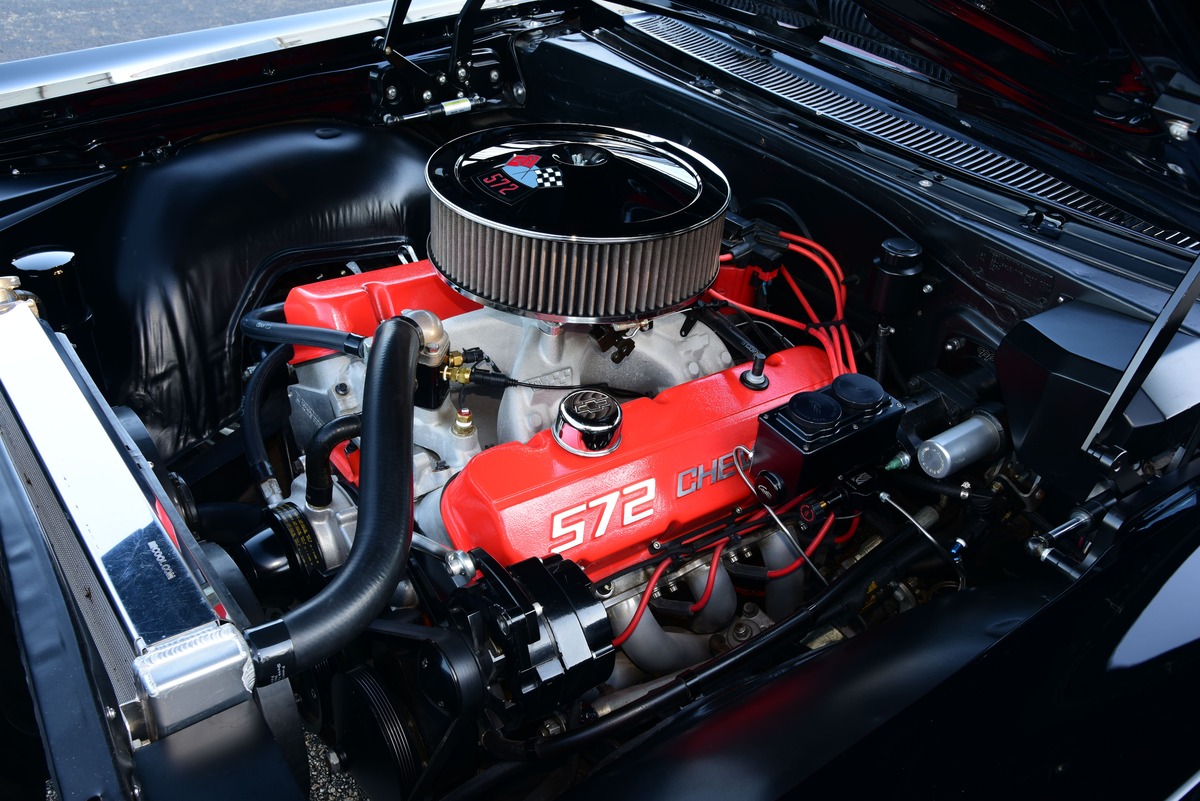 After making the decision a few years later to start the search for his own project, it wasn’t long till he located a well-sorted 1965 Bel Air in nearby New Hampshire. The car packed a 396ci big-block linked to a four-speed and was a solid start so a deal was made and the keys changed hands. While Dave enjoyed the car, it wasn’t long ‘till he and Jim pulled the engine in favor of a 572ci Chevrolet Performance V-8 for an extra power punch. Wanting to bring the car to the next level, he contacted Chris Cerce Customs in Taunton, to go over is thoughts. Chris outlined plenty of potential ideas for the cars rebirth including a number of performance upgrades and soon after it was delivered for a full build. 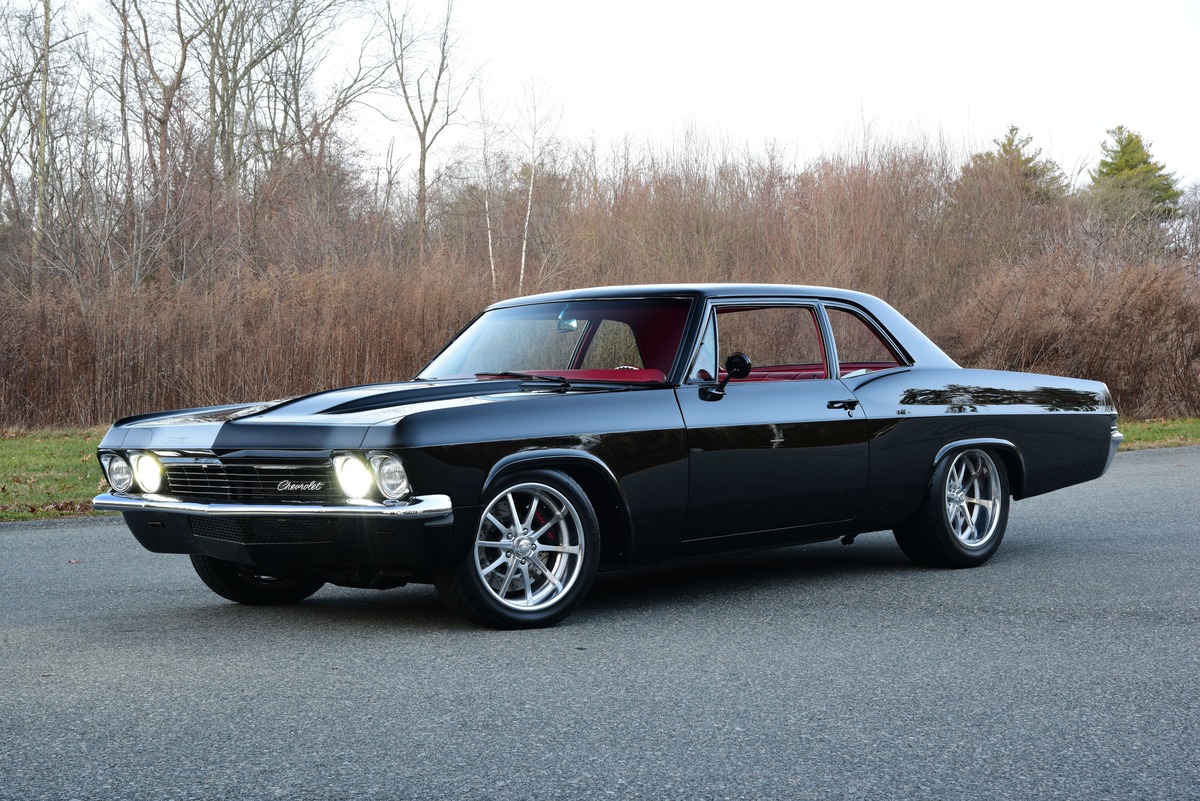 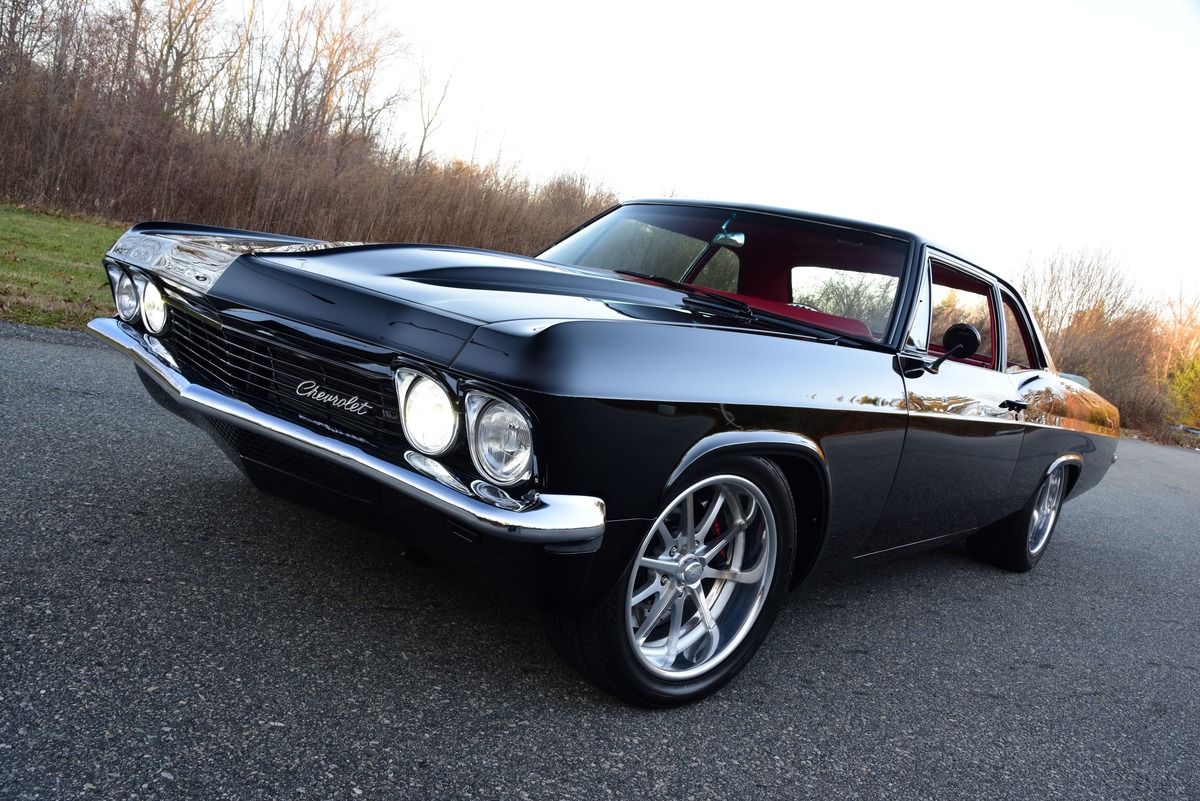 Once the car was torn down the original spine was blasted clean, painted and treated to additional bracing to stiffen it up. Out back a GM 12-bolt rearend was packed with Strange Engineering 31-spline axles linked to a Detroit Eaton Truetrac turning 3.73 gears. It’s suspended in place by a combination of Global West adjustable upper tubular control arms with matching lower arms, Panhard bar and QA1 coilover shocks. To add plenty of razor-sharp handling Global West tubular upper and lower control arms are combined with matching 2-inch drop spindles and QA1 coilover shocks. When it’s time to stop on a dime, fluid moves through a CPP HydraStop unit capped by a Baer Remaster to stainless lines with matching 14-inch 2-piece drilled and slotted discs with six-piston calipers at each corner. For plenty of style, 18×10-inch front and 18×12-inch rear Billet Specialties SLC Series Turbine-model wheels wear low-profile Nitto NT555 G2 rubber. 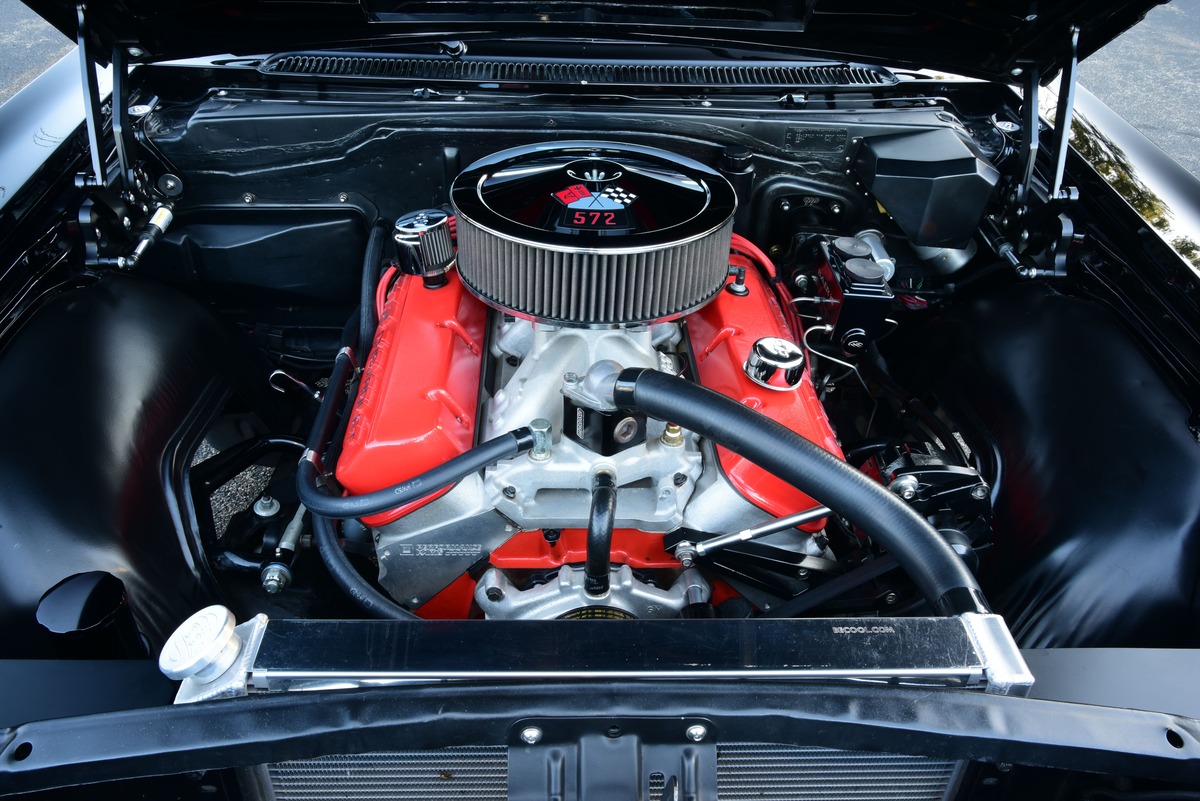 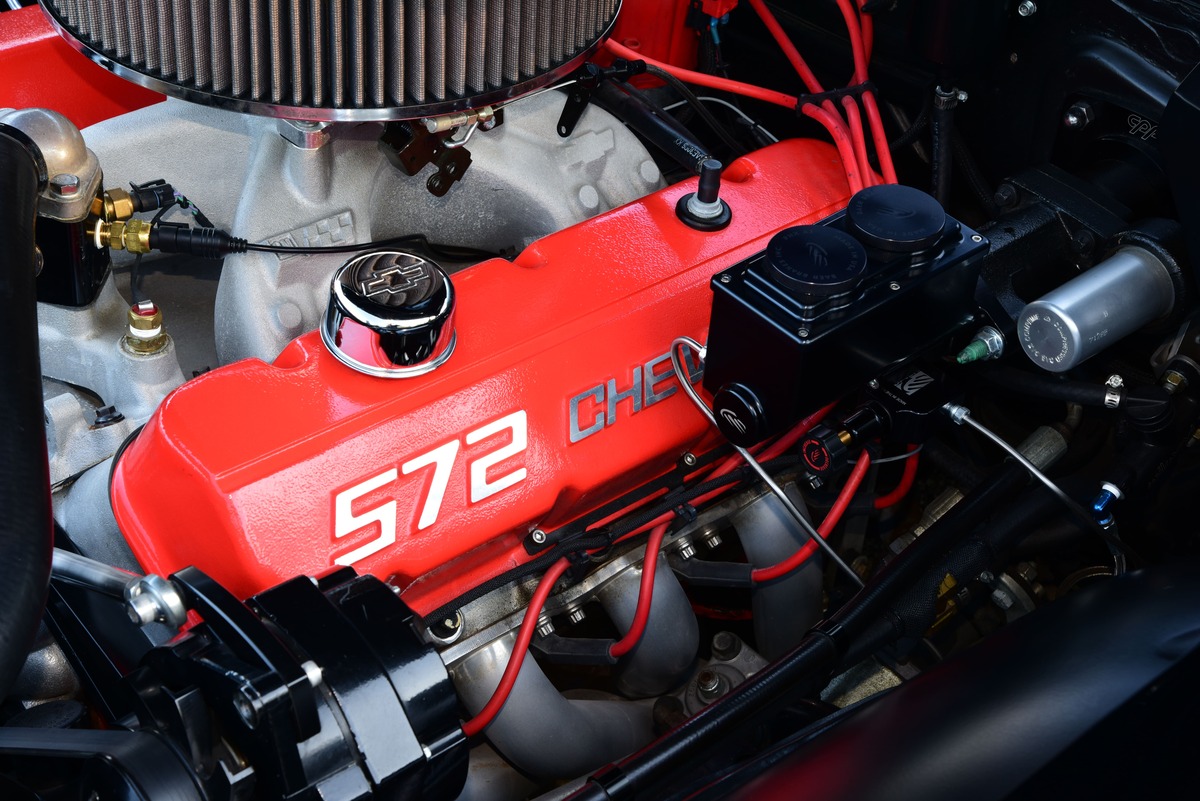 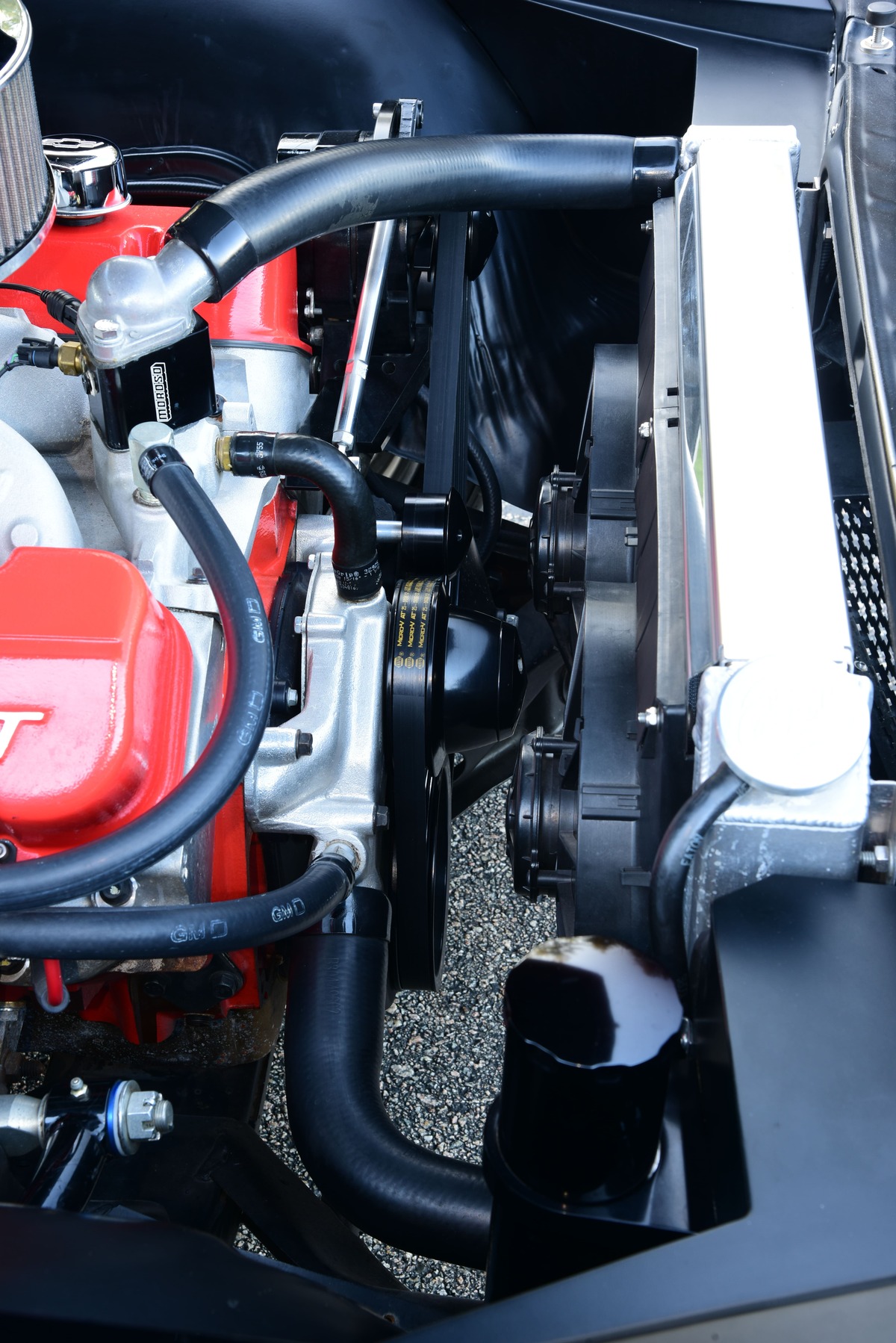 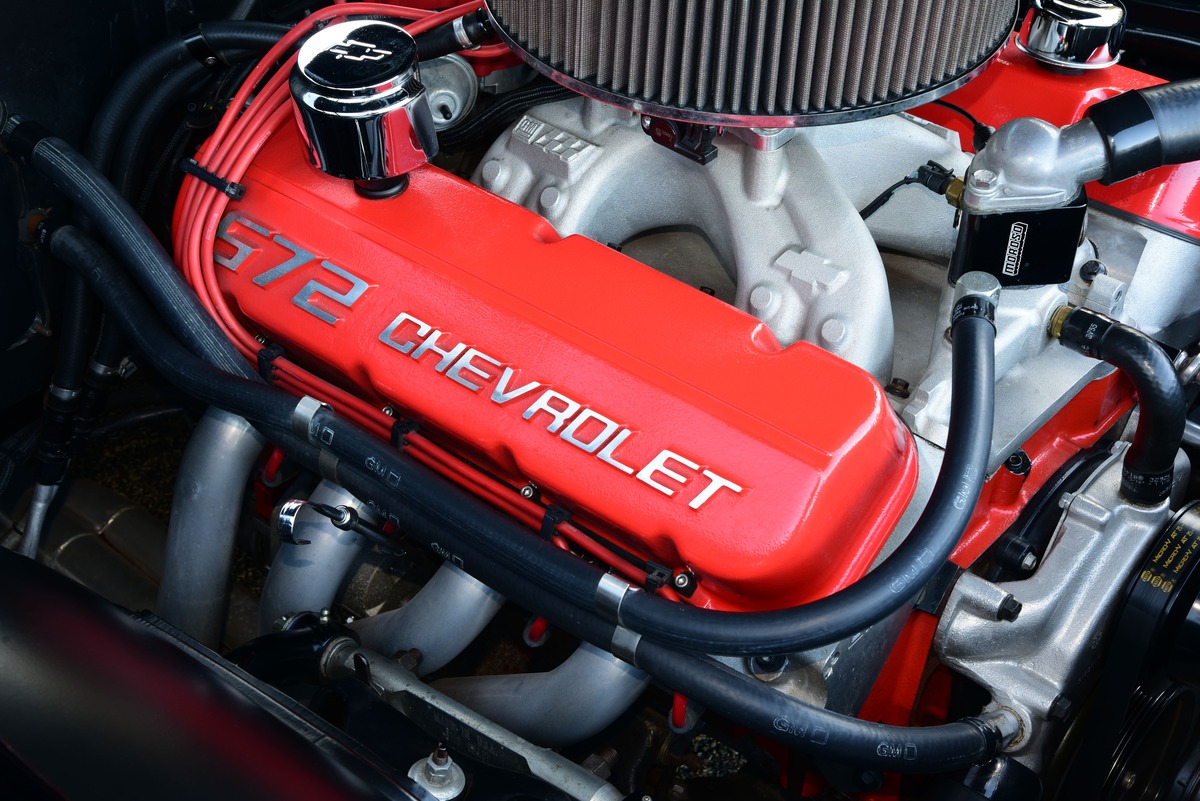 Having always been a fan of big-blocks and three pedals, Dave wanted to up the ante of the original 396ci mill that was in the car with one from the Chevrolet Performance catalog. He selected their fire-breathing ZZ572 / 620hp DeLuxe crate engines that come straight from the factory packed with a speed shop full of go-fast goods. A cast iron tall-deck four-bolt main block was filled with a forged steel crank linked to matching shot-peened rods capped by forged aluminum pistons getting bumped by a hydraulic roller stick. Up top, a set of aluminum rectangular-port heads with 118cc-chambers provide seamless power when matched to an aluminum Chevrolet Performance intake breathing deep through a Holley Sniper EFI system. Other cool bits include a March Performance pulley kit, Powermaster alternator and radiator form Be Cool. A GM HEI ignition lights the fire while custom headers dump spent gasses to a 3-inch stainless exhaust all by Chris with Flowmaster Super 44 mufflers for a throaty tone. Power moves through a Tremec T5 trans to a driveshaft from Brookline Machine. 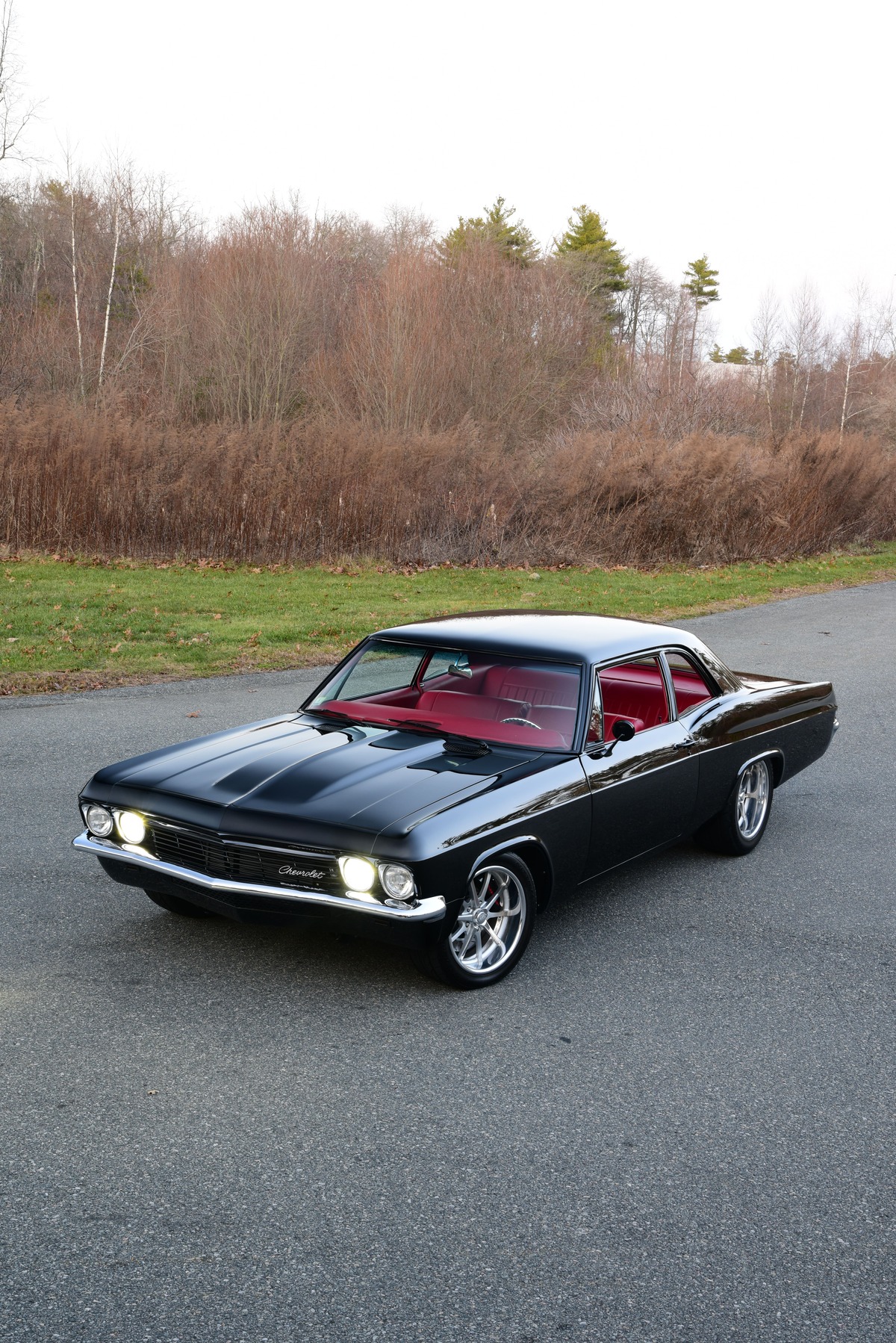 The ultimate surprise when you strip a body to bare metal is that it’s nearly rust free, especially if you live on the East Coast. This allowed Chris to concentrate on a number of updates to the factory steel starting with creating a one-piece grille surround, hand formed lower valance, narrowed and tucked bumper and custom cowl induction hood incorporating a center section from a 1969 Camaro with extended reveal lines. Moving rearward the quarter panels were replaced with units from Classic Industries while also having the lower areas slightly extended rearward to tuck the narrowed bumper to the body. With all the updates completed the team then focused on metal finishing the body and setting all the gaps. Chris then loaded his spray gun with plenty of House of Kolor BC-25 Black and laid down a flawless coating, bringing the build to life. 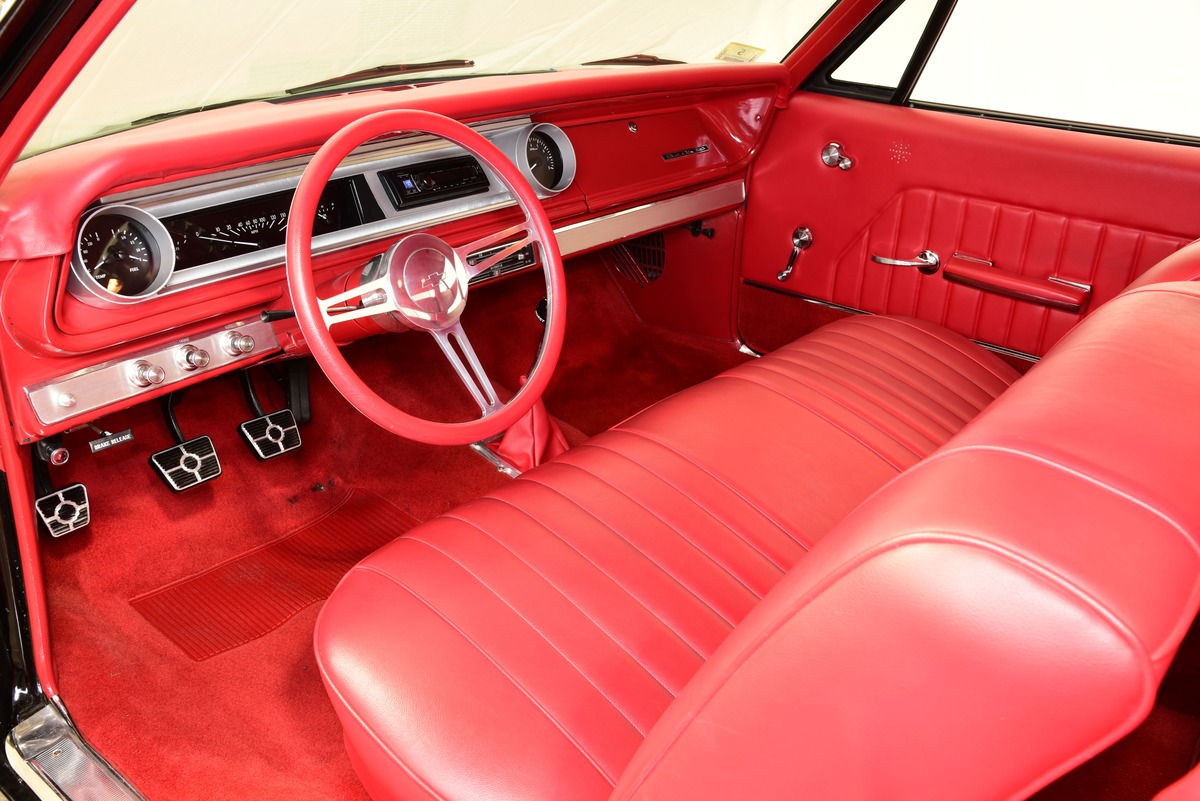 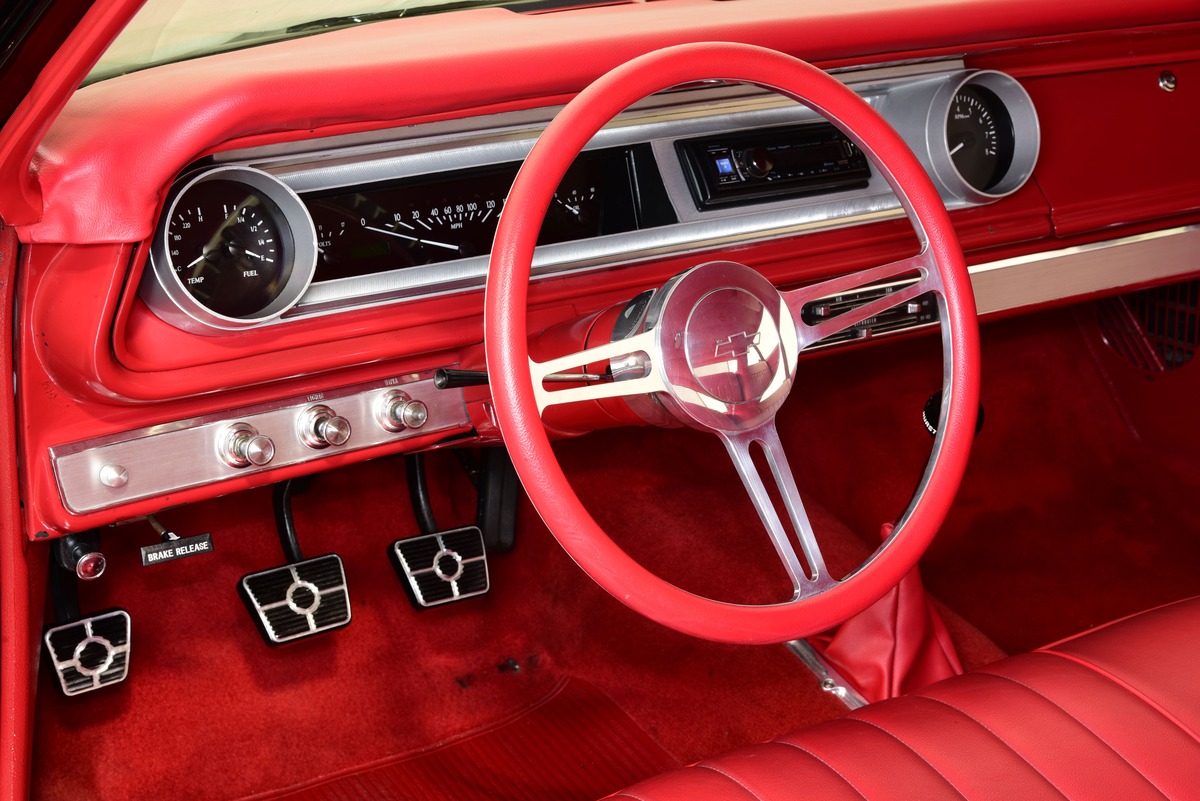 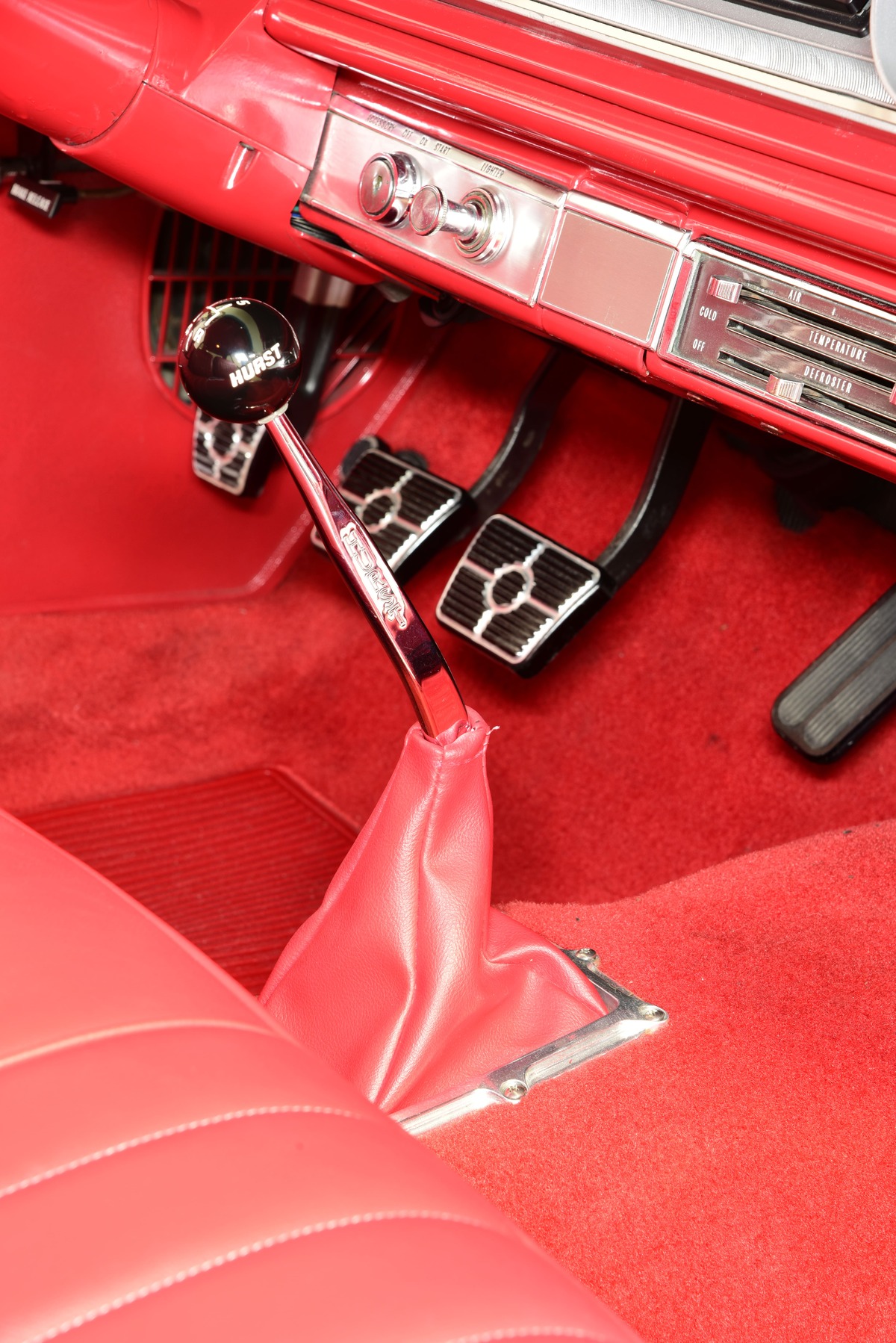 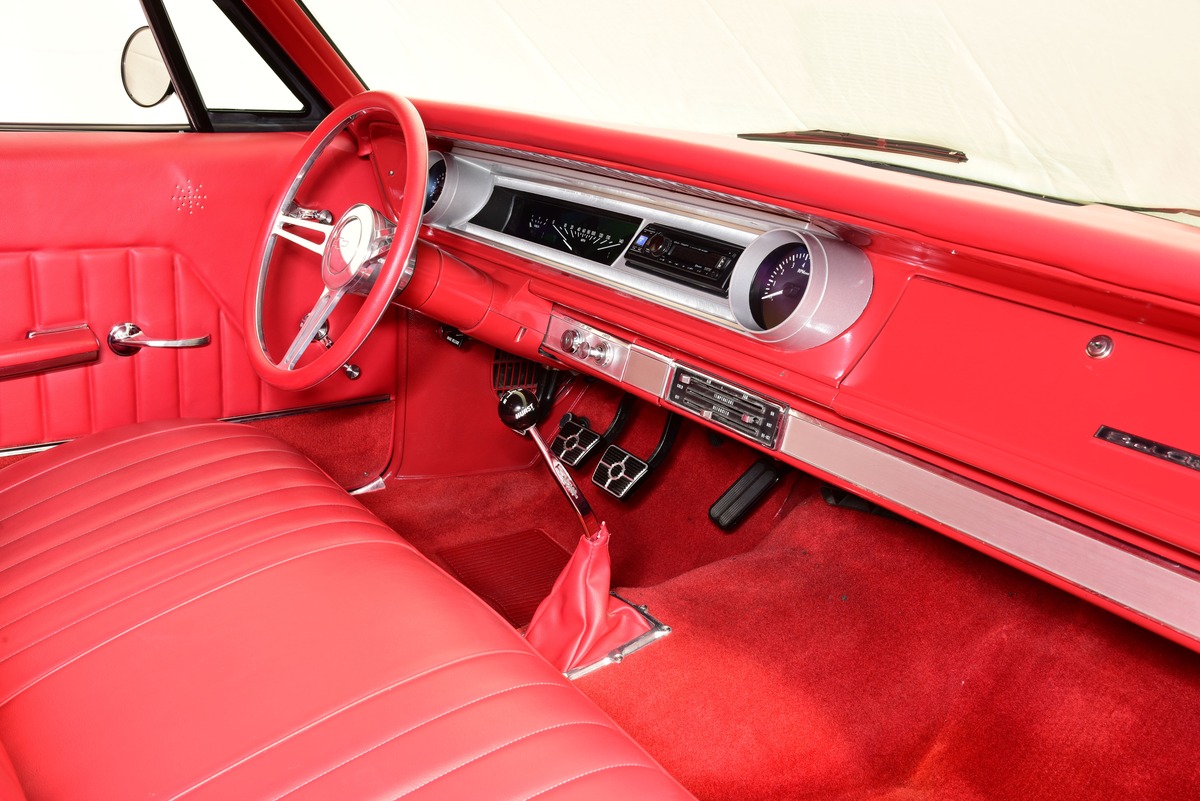 When it came to the interior, Dave wanted to retain the factory good looks with a dash of elegance. The stock dash was updated with dials from Dakota Digital to monitor the vitals while a Billet Specialties steering wheel mounts to a stock column linked to a Detroit Speed steering box. Shifts move through a stick from Hurst while a Painless Wiring kit installed by Chris brings it all together. For comfort, Fred Carello of Carello Auto Upholstery in Warwick, Rhode Island, stitched up a winning combination of red leather on the original seating complimented by matching side panels and plush carpet. This is one Chevy that sees plenty of drivetime across New England and to us that’s the real deal. MR