In The Garage Media
All Chevy PerformanceNew Products 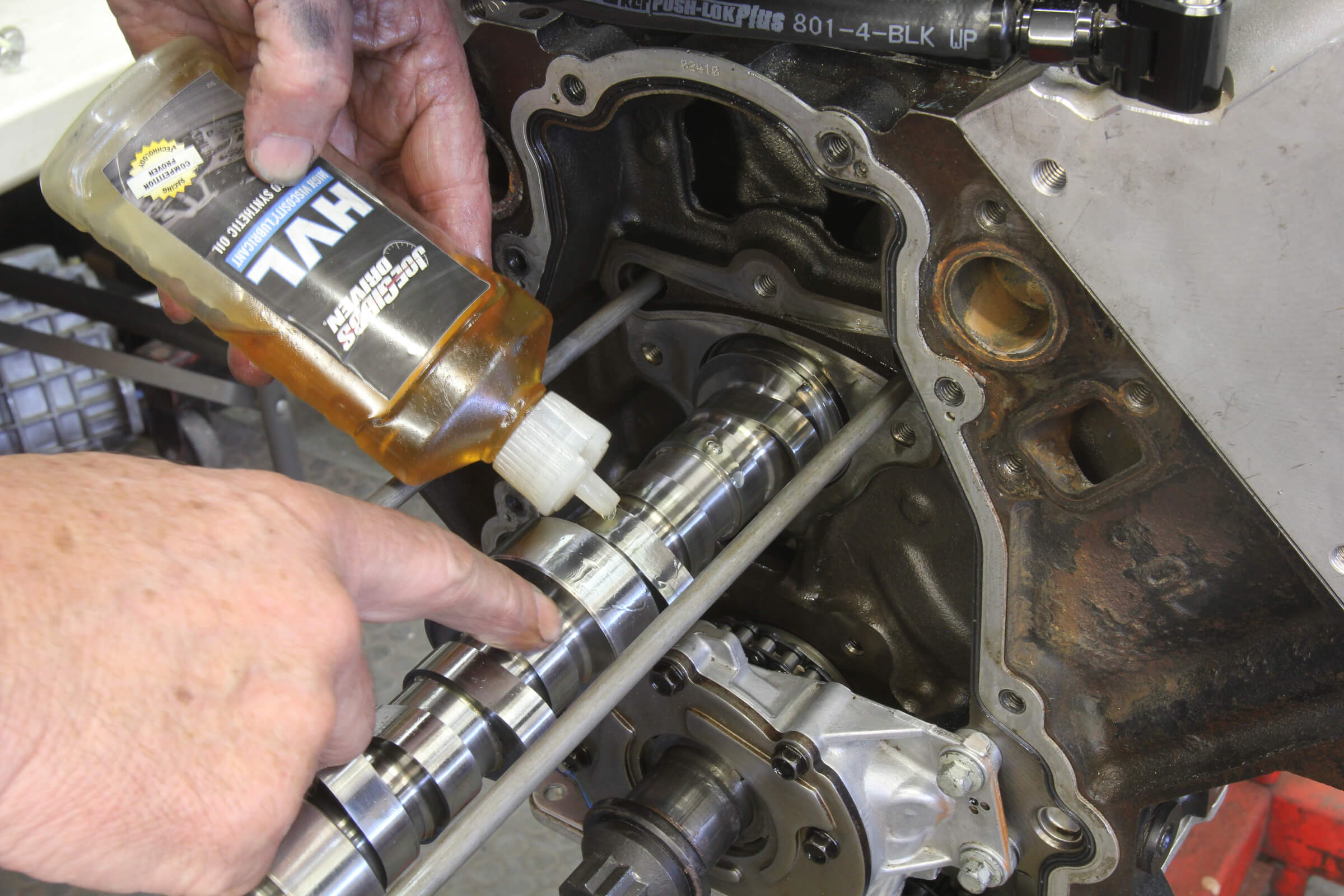 How to Choose Your First LS Camshaft

There comes a time when every gearhead wants more from their engine. Sure, we vowed we’d leave it stock. Then we threw the entire catalog of bolt-on parts at it. And still, we want more. The high-flow intake manifold helped. The big-tube headers did too. But when it comes to truly awakening an engine’s power potential, it’s time for a camshaft.

If the cylinder heads are considered the lungs of the engine, the camshaft is undoubtedly its brain. Not only will it determine how much power and torque an engine will make, it controls at what point in the powerband they occur. Camshaft choice will also dictate idle quality, piston-to-valve clearance, and many more variables. That means choosing the right camshaft for your application is immensely important.

Due to the unfailing popularity of LS engines, from late-model OEM vehicles to street rods to retro-swapped muscle cars it seemed a natural platform to focus on when setting some guidelines on just how to pick one. For some expert advice on the subject we turned to Brian Tooley of Brian Tooley Racing (BTR) who specializes in LS camshafts, springs, and other performance valvetrain hardware.

If you’ve opened a cam catalog or browsed any of the countless online retailers, the results can be flat-out overwhelming. At first glance, a cam card is an indecipherable mix of letters, acronyms, and decimal points. But, once you dive into it, we promise it’s not that bad.

For the sake of this story, let’s assume you’ve never touched a cam. The cam card might as well be Greek, and you have no idea what your first step should be. That’s OK and the best thing to do is collect the information within your control. What LS-based engine do you have? What car is it in? What do you plan to do with that car? Is it a cruiser? A dragstrip bruiser? Or, does it pull your fishing boat to the lake. While seemingly superficial questions, they actually give a seasoned cam tech a good deal of info to steer you in the right direction.

“In my opinion the most important consideration is making sure you purchase a cam designed specifically for your application and how you intend to drive your vehicle,” Tooley says. “Customers need to accurately communicate exactly what the application is. Vehicle weight, converter size, and so on are all extremely important.”

Nail the basic information first, then move onto the more detailed specs.

Manufacturers like Tooley also offer an approach that mitigates the intimidation factor of cam selection that comes in the form of simple stage kits. “The smallest stages can be used with stock converters and the largest stages generally require aftermarket stall converters and driveability takes a hit.”

How Big is Too Big

If big is good, bigger is better, right? In the world of camshafts, bigger, in a cosmic rarity, is not necessarily better. But what does “bigger” really shake out to? It’s sort of an abstract word and in camshaft lore can apply to a few different parameters, the most important of which are duration and valve lift.

This spec refers to the amount of time the intake and exhaust valves are open. As duration increases, air and fuel mixture is allowed more time to make its way into the cylinder during the intake stroke. However, as camshaft duration rises, peak power begins to climb up the powerband. One particular cam fact is that the intake valve does not close when the piston reaches bottom dead center (its lowest point in the cylinder). It actually closes just a bit after that when the piston is already moving up in the cylinder on the compression stroke.

This might seem strange but it actually plays a major role in power production. For example, a street/strip cam might close anywhere between 30 degrees ABDC (after bottom dead center) to 75 degrees-ish ABDC, depending on its specs. The reason this happens is that the air and fuel charge that flows through the intake ports at nearly supersonic speeds has mass. At high rpm, that mass and high-speed create a moment that allows it to continue flowing into the cylinder even as the piston is rising, which helps maximize cylinder filling and power production. However, a large cam with a long duration and late intake valve closing point can significantly rob power and torque production at low rpm by allowing a significant portion of the inlet charge (which has less momentum at low rpm) to escape from the cylinder back into the intake manifold. This is known as reversion. On the exhaust side, a long duration tends to open the exhaust valve deeper into the power stroke, which also hurts low-speed power and torque.

Choosing a cam sized to produce power and torque where you realistically need it will always deliver better results than aiming for an arbitrary peak number. Libraries can—and have been—filled with information about internal combustion theory and this is only the tip of the iceberg.

Valve Lift
“Too big” in this sense refers not to how the engine will behave but instead toward avoiding catastrophic failure. When the camshaft specs deviate too much from stock, certain LS engines can experience valve-to-piston contact. When this happens, the collision is never without damage to the piston crown or the valve. No one wins.

Avoiding this issue is simple as the maximum specs have been thoroughly scienced out. Tooley says that in general, most LS applications [with stock pistons] are limited to around the following IVO (intake valve opening):

Choosing a camshaft for an engine with forced induction does present some changes from a naturally aspirated (NA) engine application. That isn’t to say a good NA cam won’t work with forced induction, only that it isn’t optimized. Tooley uses the comparison between a positive-displacement style and centrifugal-style supercharger to highlight the difference.

Camshafts for blowers and turbos tend to have wider lobe separation angles (LSA), which in layman’s terms are a rough estimate of intake valve/exhaust valve overlap. An NA engine utilizes overlap, when combined with low pressure pulses in the exhaust, to create a scavenging effect that helps to pull spent exhaust gases out of the cylinder and fresh air/fuel mixture in. In a forced-induction application, the power adder (supercharger or turbo) is doing that work and less overlap and is required. This is why you tend to see blower, turbo, and even nitrous cams with slightly wider LSA numbers when compared to an NA grind.

What Other Components Do I Need?

When changing cams, it’s never a bad idea to look at the entire valvetrain. If the engine is extremely high mileage, it might be a good time to swap out worn components, such as pushrods and lifters, but if the cam is a high-performance grind, a rocker upgrade or valvespring replacement might also be in the cards.

Factory valvesprings were meant to handle the lift and rpm requirements of the factory cam they were initially paired with. If the engine came out of a truck that rpm load and lift requirement was pretty low. If the engine was sourced from an F-body, Corvette, or other GM performance vehicle, it might have come fitted with a higher-pressure spring. Either way, it’s important to know what you’re working with.

When moving to a higher lift camshaft, such as the 0.600-inch grinds mentioned above, a better spring is almost always a requirement to adequately control the valve and prevent the new, more-aggressive cam lobe from floating (more accurately “bouncing”) the valves at higher rpm. When that happens, the valve is not able to return to its seat and fully close at the intended time and power will immediately drop off. This loss of valve control is very hard on the valvetrain and can cause damage if it repeatedly occurs.

More aggressive cams also place more load on the pushrod, so stepping up to a thicker-wall or larger-diameter pushrod is a good way to boost durability. This also a factor when the engine is revving significantly higher than stock.

LS rocker arms are admittedly good right out of the gate. They are a huge leap forward over early small- and big-block designs, but, like every other component in the valvetrain, weren’t designed for the power and rpm potential the aftermarket has thrown at them. In high spring pressure and high-rpm applications, the bearings inside the rocker arms can fail and the needle bearings will spew into the crankcase, wreaking all sorts of havoc. For that reason, many companies offer trunion upgrade kits that replace the trunion (the portion of the rocker arm assembly the rocker rides on) and the bearings. The new bearings are typically higher quality and fully captured to prevent roller needles escaping in the event of a failure. There are also rocker arms that replace the roller bearing assembly entirely with a bronze bushing for even higher load capacity.

Choosing a camshaft that is right for your application on paper is a great start. Choosing one that’s tested in the real world is even better.

“If you have an application that a specific camshaft vendor has spent weeks or months developing camshafts for on the engine dyno and Spintron, don’t trust someone without those tools to design you a better “custom” cam, it’s just not going to happen,” Tooley says. “The level of competition in the camshaft market has never been greater, and the customer who is doing his research into which camshaft manufacturer is doing the most research on their specific application is going to benefit greatly. 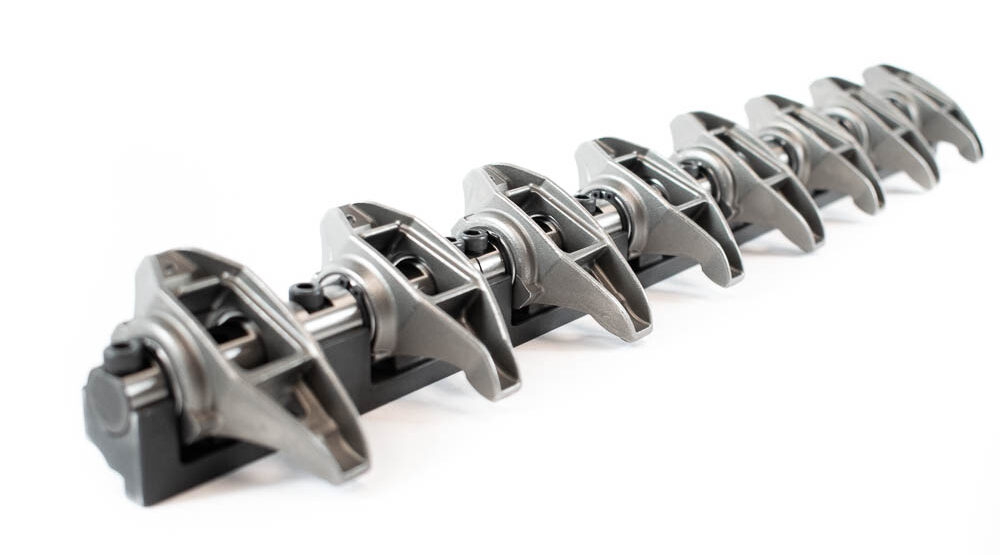 How to Interpret Cam Specs

0.050 inch has been deemed to be the amount of lift where the cylinder head starts to move air from the port into the cylinder. Because of this, looking at a cam’s duration at this lift spec is a more accurate way of interpreting how aggressive it is and how it is likely to behave in an engine. While two cams may have the same duration at 0.006 inch, one might have more or less duration at 0.050 inch.