Hot Rodding North of the Border 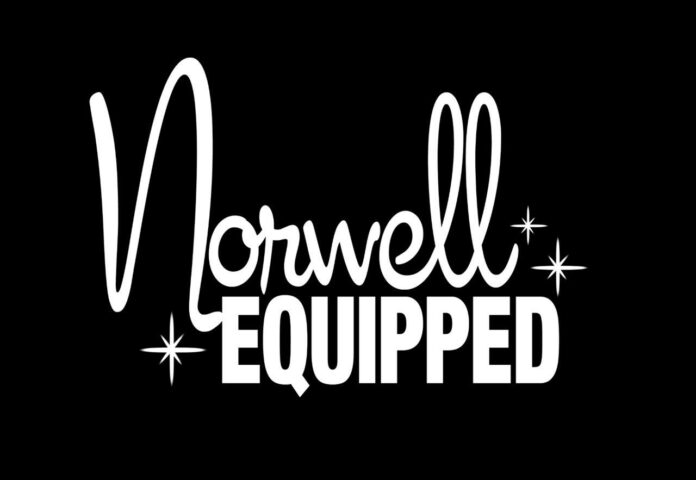 A Hot Rodder, an Artist, and a Canadian 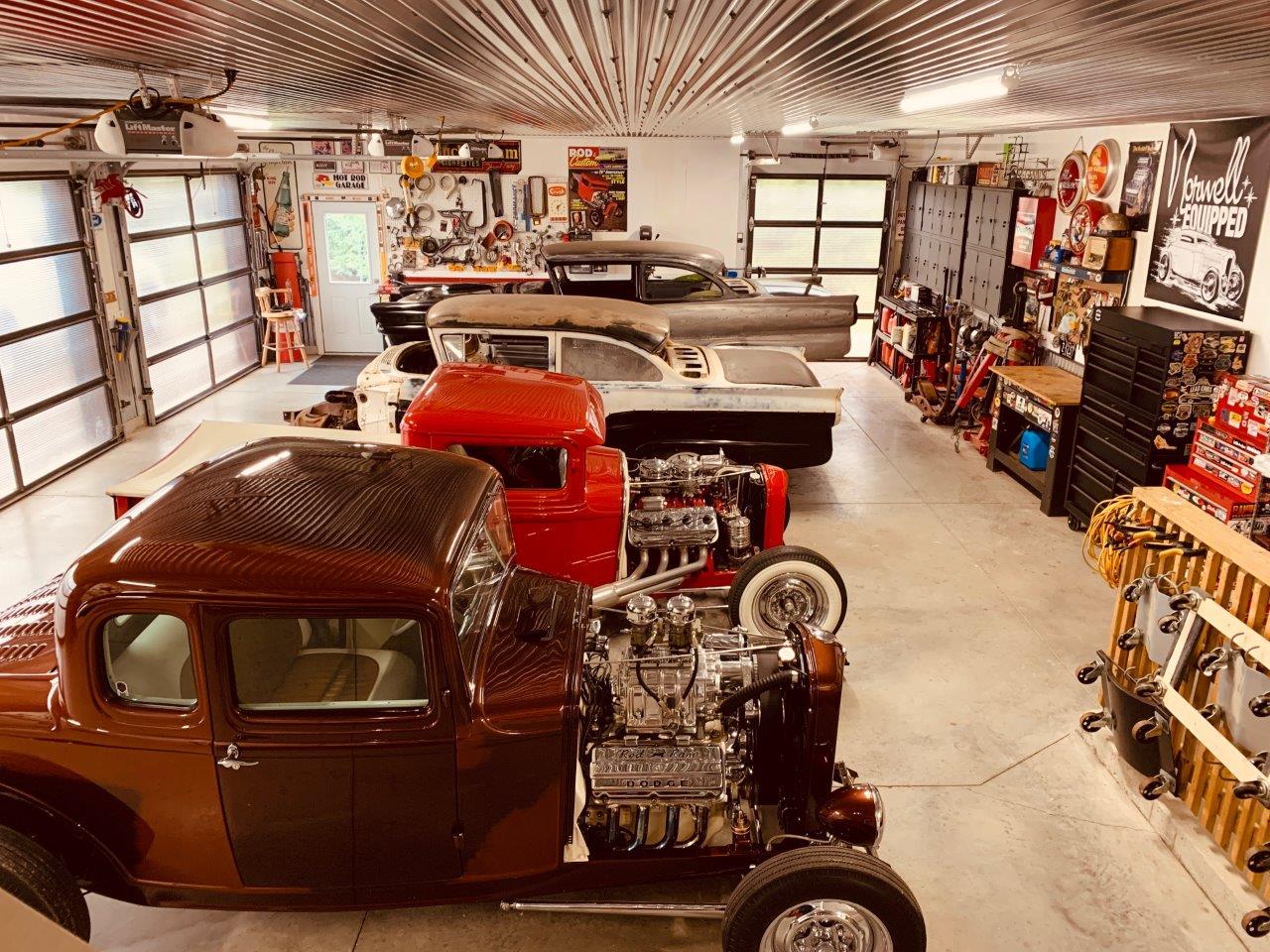 Our In The Garage Series begins with Jeff Norwell, a fulltime hot rodder, illustrator (you’ve seen his work and may not have even realized it), and Canadian who can’t get his fill of hot rods. He lives in Neustadt, Ontario, Canada, and oftentimes can be seen working and enjoying the Jalopy Jam Up Hot Rod and Custom Show in the Frontier Ghost Town above the confines that’s the U.S. and Canadian border. (For reference, Norwell lives two hours north of Buffalo, New York.) He’s also a member of the Infidel Car Club. 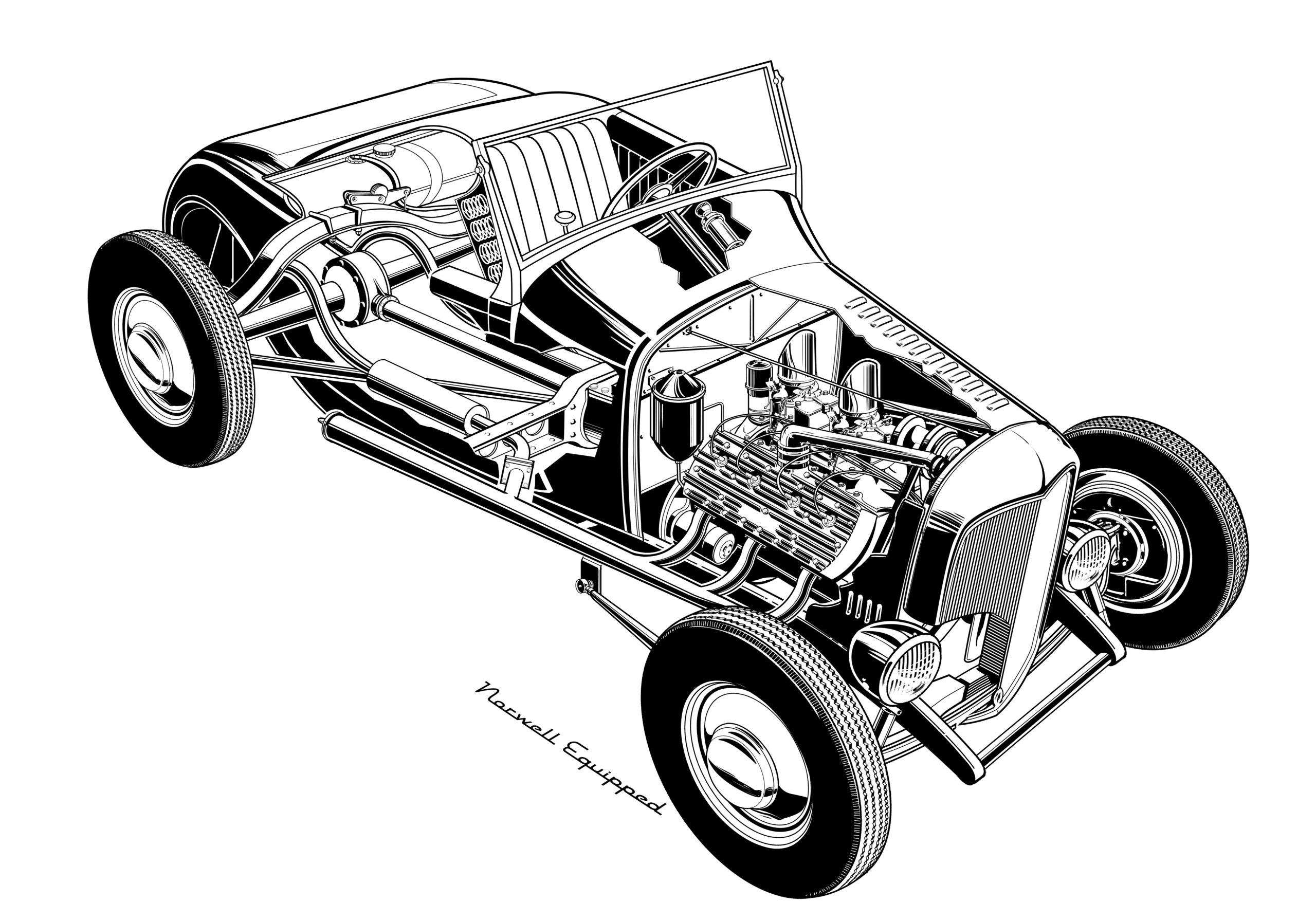 We mentioned that he’s a fulltime artist; you’ve seen his work in the likes of rodding magazines from years past. (You will also be seeing his work in the future in Modern Rodding, but more on that later.) His talent takes him far from the hot rod crowd as he has national accounts not only in Canada but in the States as well. Most of his hometown rodding buddies, and those of us on this side of the “border,” recognize him as one of the rodders behind the scenes of the Jalopy Jam Up.

Aside from being oh-so cool (Jeff, I know you are grimacing now!), Norwell also has a home garage any rodder, north or south of the border, would be proud to show. Not only is the garage very cool, as buildings go, but the memorabilia is eye-grabbing cool, and this doesn’t even begin to do justice to his four hot rod projects resting beneath the roof.

We asked Norwell to give us a “hot lap” around the garage and tell us a little something about the hot rods, so here goes. 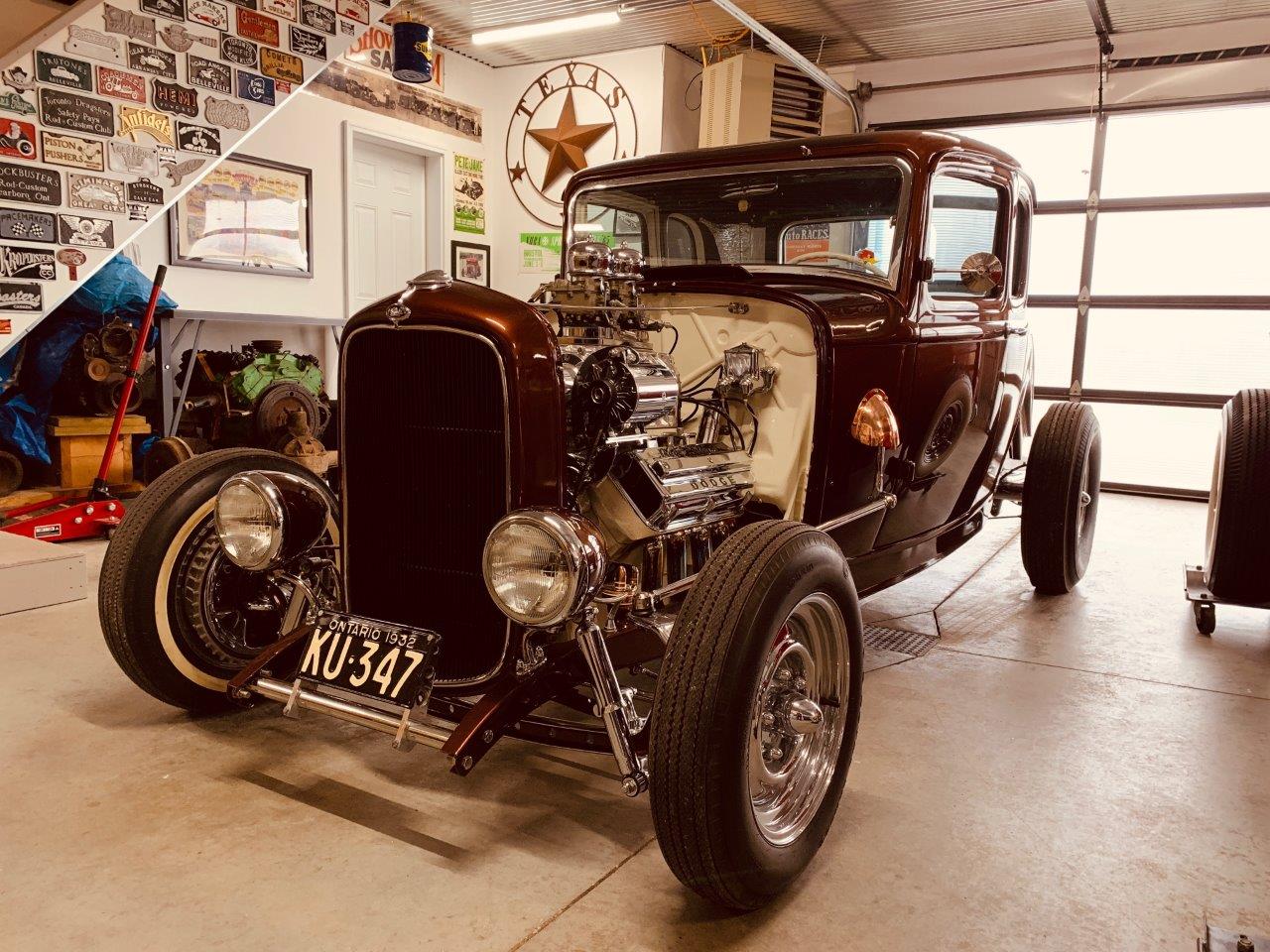 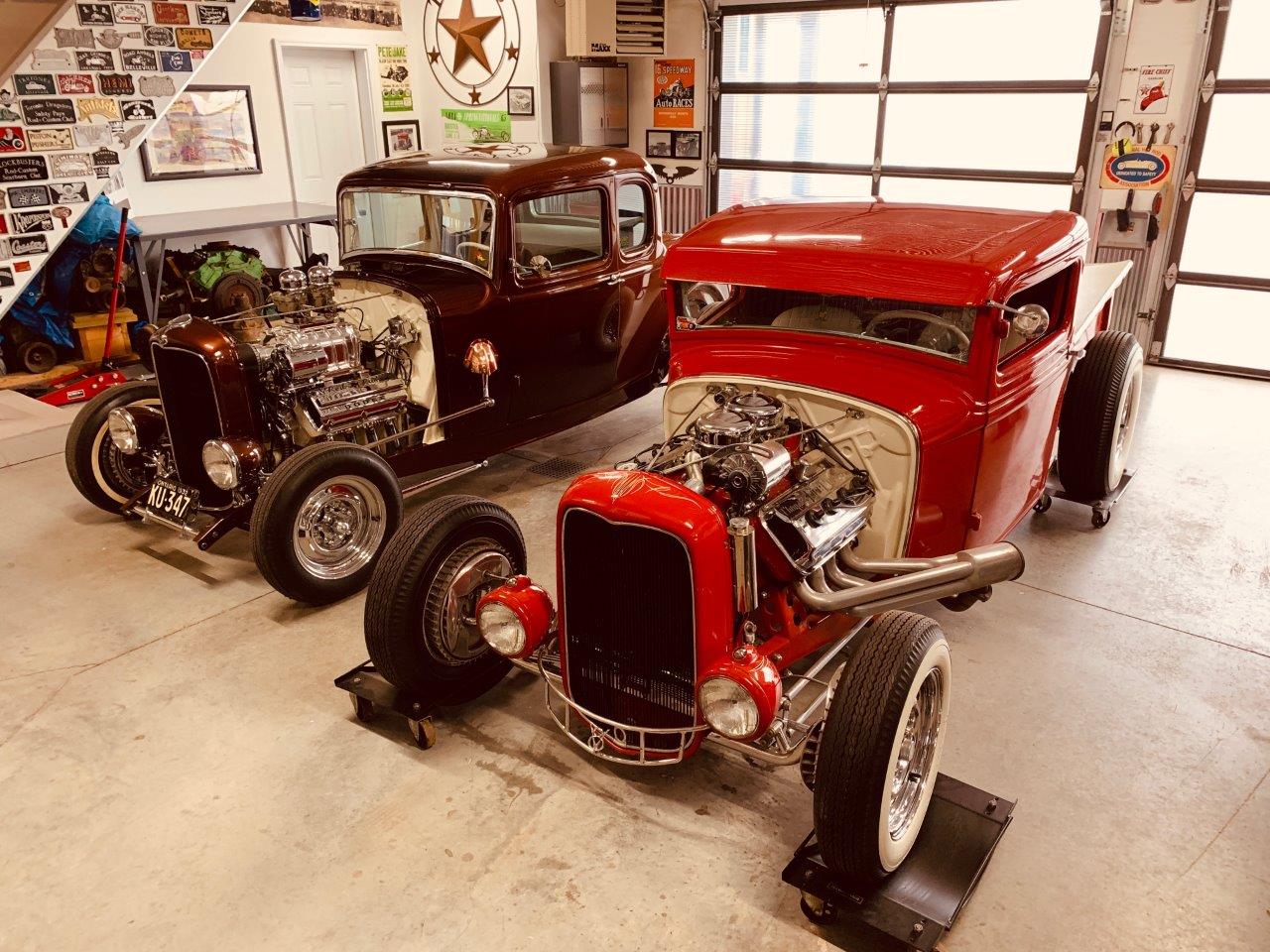 There are early Hemis in both hot rods. The custom-mix root beer brown 1932 Ford five-window highboy coupe is built in highboy-style with a stock roof … no chop. The building was handled by Neil Candy with help from Karl Spafford (engine) and Ray Williams. Nestled between the ’rails is a 1955 Hemi bored to 270 inches and topped off with a Don Hampton 4-71 blower and a pair of Rochester 2GC carbs sitting on top. Mated to the lil’ Hemi is a T5 five-speed trans via a Wilcap adapter, coupled with a custom driveshaft back to the Winters quick-change rearend.

Next up is the lil’ red 1932 Ford pickup (Hot Rod 1961) that has been around for decades. There’s no mistaking it with its brilliant paint (1952 Ford Coral Flame Red), 6-inch top chop and accompanying 6-inch channel (the width of a Deuce frame), wide whites on chrome wheels, and louvered tailgate. Neil Candy handled the build along with Tim Banning (Hemi builder), Kevin A. (paint), Nick Harrison (wiring), and Ken Stewart (custom tube axle). It too is powered by a Hemi sitting in front of the white accent firewall. This Hemi is a 1957 392 (A-1 block) and comes topped with a Weiand intake with a pair of 600-cfm Edelbrock carbs. The Hemi is linked to a Doug Nash 4+1, running the power back to a Currie Ford 9-inch.

Both of the early hot rods are finished running cars (although the coupe is undergoing some paint “maintenance”). 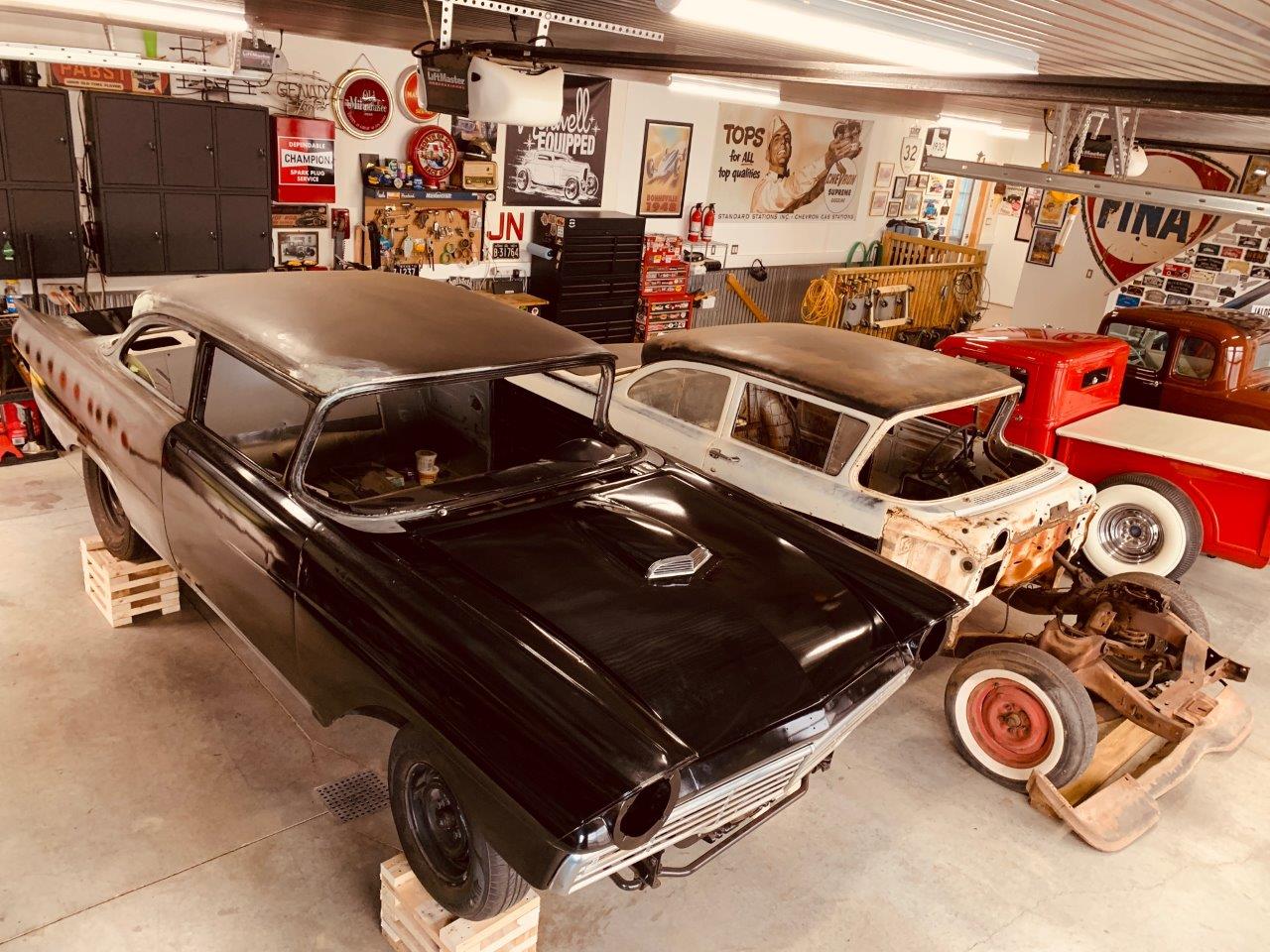 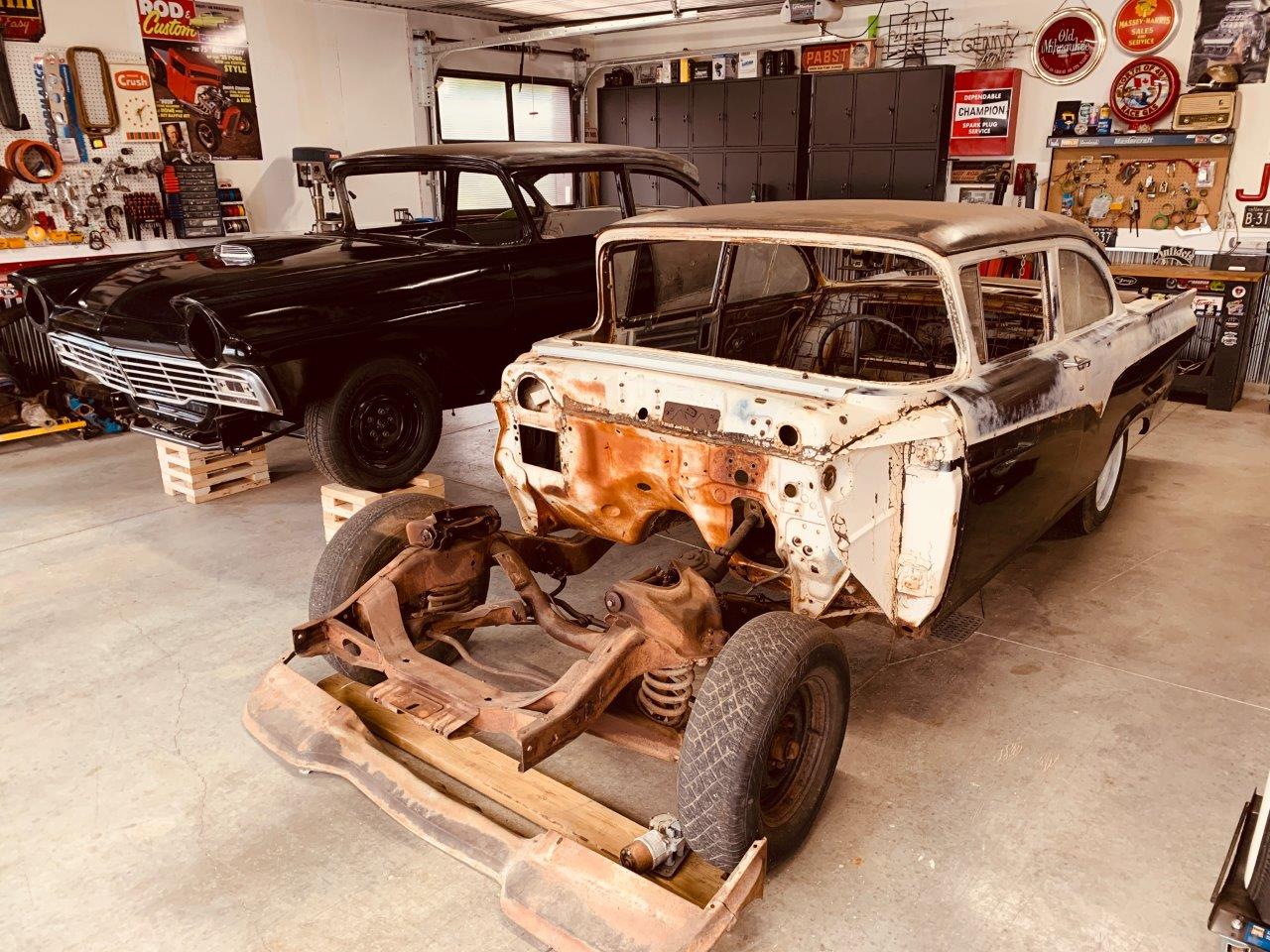 Now for the “in the works” or projects that will someday see the light of day are a pair of 1957 Fords. Think for a minute what else you might remember or recognize from 1957 that were black and white coupes … do you remember the Black Widow brought to us by Chevrolet? Well, this is Norwell’s version of what would have happened if Ford had brought out their own version.

The black and white one with no motor Norwell bought out of Texas.

“It’s actually a funny story because I didn’t tell my wife about the car for about  seven years. Then where it was being stored the guy spilled the beans. I then had to say that it was hers.”

Norwell goes on to tell us that “… it isn’t hers but his.”

Guess what, Jeff … it is hers and that’s rest of that story! 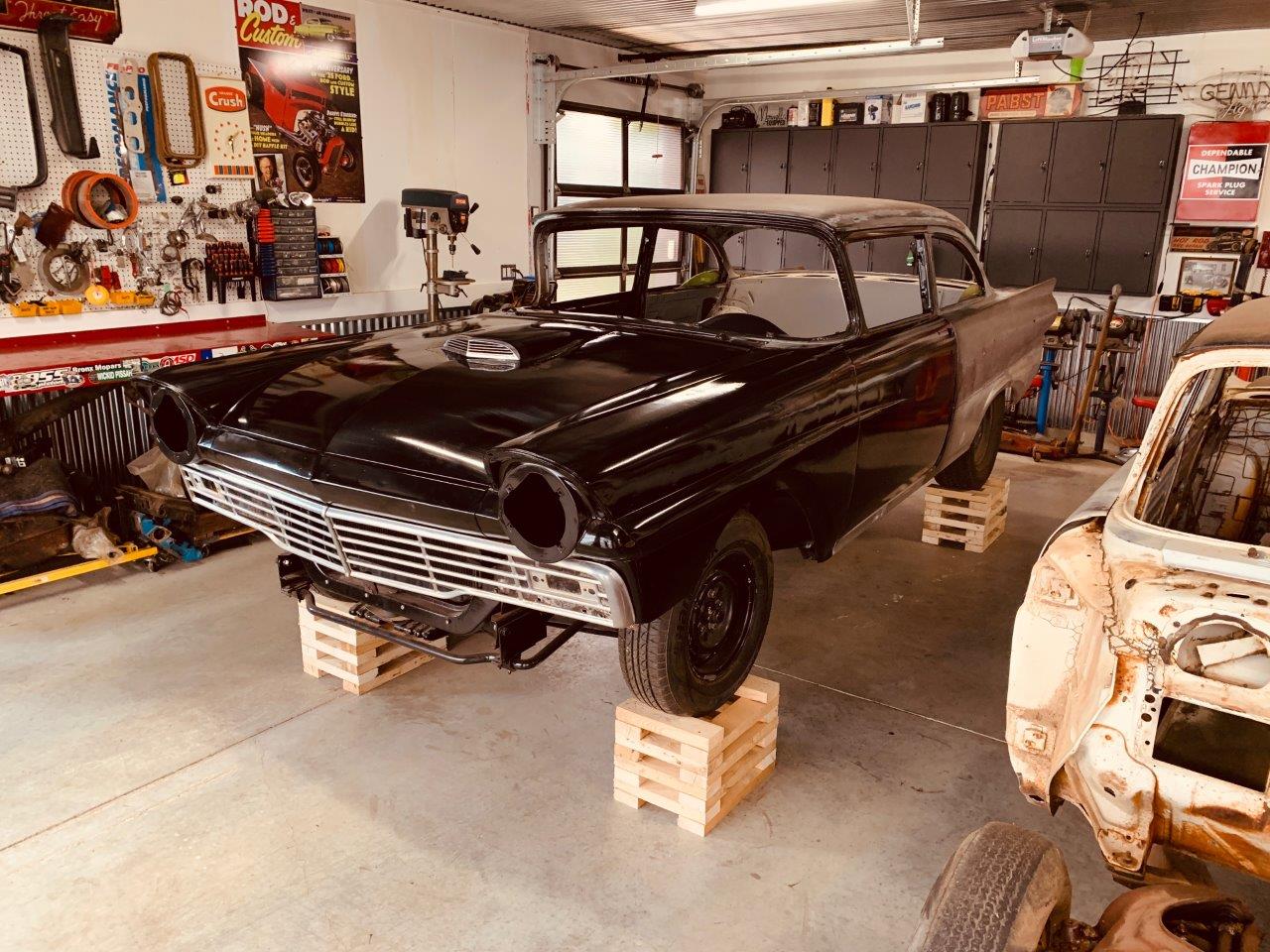 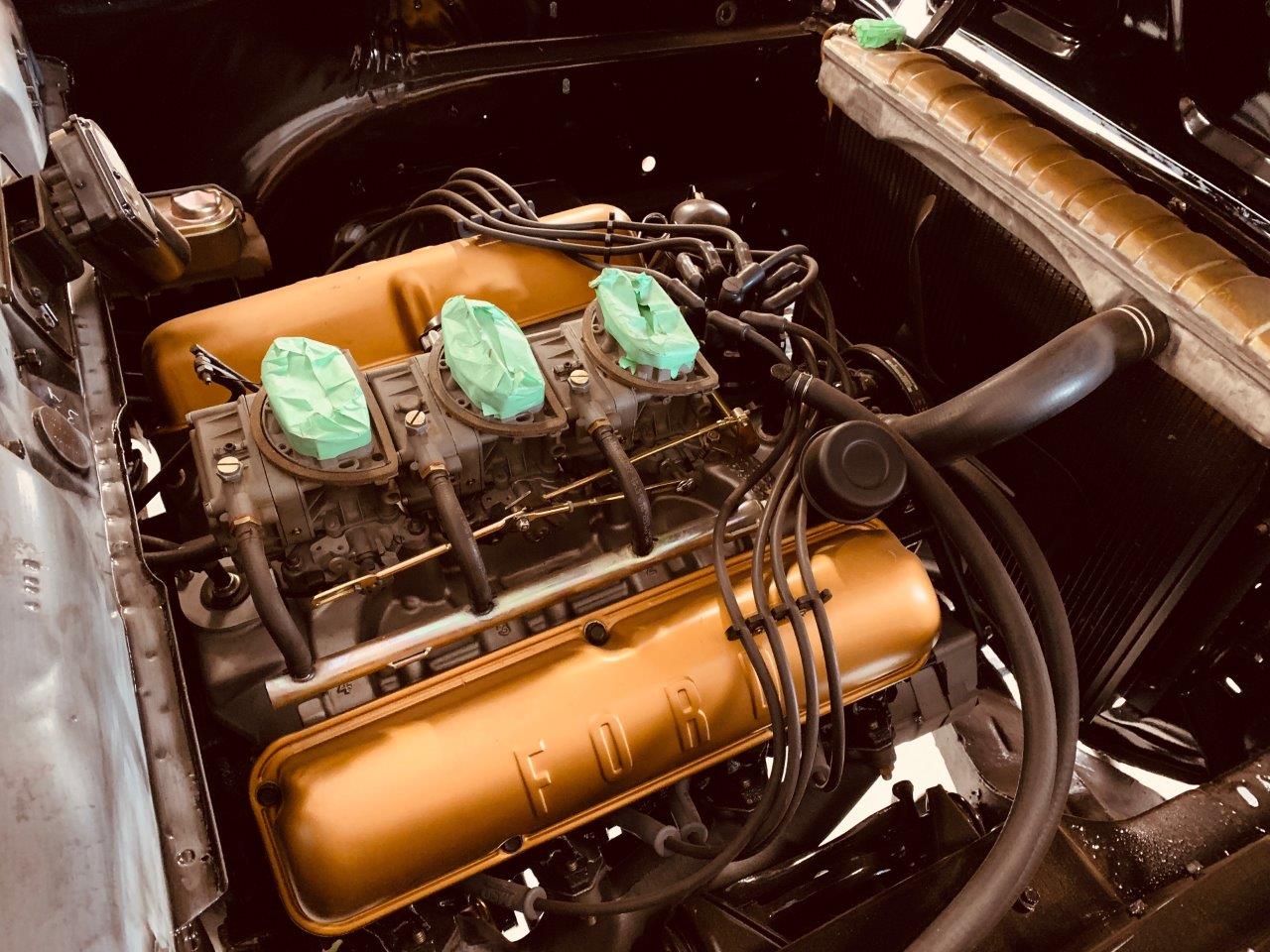 When asked about the second 1957 Ford Norwell spins this bit of info.

“The second 1957 Ford I bought out of Iowa and it’s an original Texas car. I paid around $3,500 and it was running under its own 460 power. I took all that out and have been getting bodywork done because the rear quarters were gone but that’s all brand new. And then I bought a 1966 big-block Ford 428 and to go along with it I found a 406 tri-power induction complete (manifold and carbs) that had never been on a car. It was direct from a Ford dealer. A friend of mine had it and he sold it to me and then put the motor together. It’s probably good for 425 hp and is matched to a Ford Top Loader four-speed transmission.”

On the subject of headers, Norwell tells us another great story.

“Do you remember the beautiful Ford factory headers that came on the 1963-1964 Fords? Well, I wanted those for this Ford but everyone said that they wouldn’t fit on the 1957-1959. Well, I’m here to tell you that you can make them fit, and I did.

“I wanted a look that would have occurred in 1962-1963. The black and white 1957 is bone-stock sheetmetal with one noticeable modification and that is the early T-bird scoop hood. The scoop fits perfectly and it’s something Ford should have done.

“The suspension is fundamentally stock but I did install heavy-duty suspension mods front and rear. Heavy-duty sway bar in front, coilovers at the corners, along with heavy-duty Eaton front springs, and Eaton six-leaf Police spring in the back.”

Norwell went on to tell us more about the exterior on the all-black 1957 that will have a floorpan like a businessman coupe (similar to a Chevy of the day) would have had … rear seat delete. It is (was) a factory heater delete car that someone had put a dealer-installed heater in. It’s from this effort that Norwell is ending up with a 1957 Ford with a potent big-block that will be reminiscent of the Chevy Black Widow cars but his Ford will be called the Widow Maker … we have to agree that’s very cool. In 1958 the FE came out and Norwell wants to build a pair of 1957s that might have been what the factory would have done had these cars been test mules of the day. (We’ve asked Norwell if he would do a piece of artwork that we can show later to all of the Modern Rodding readers and to include it with the finished car.) 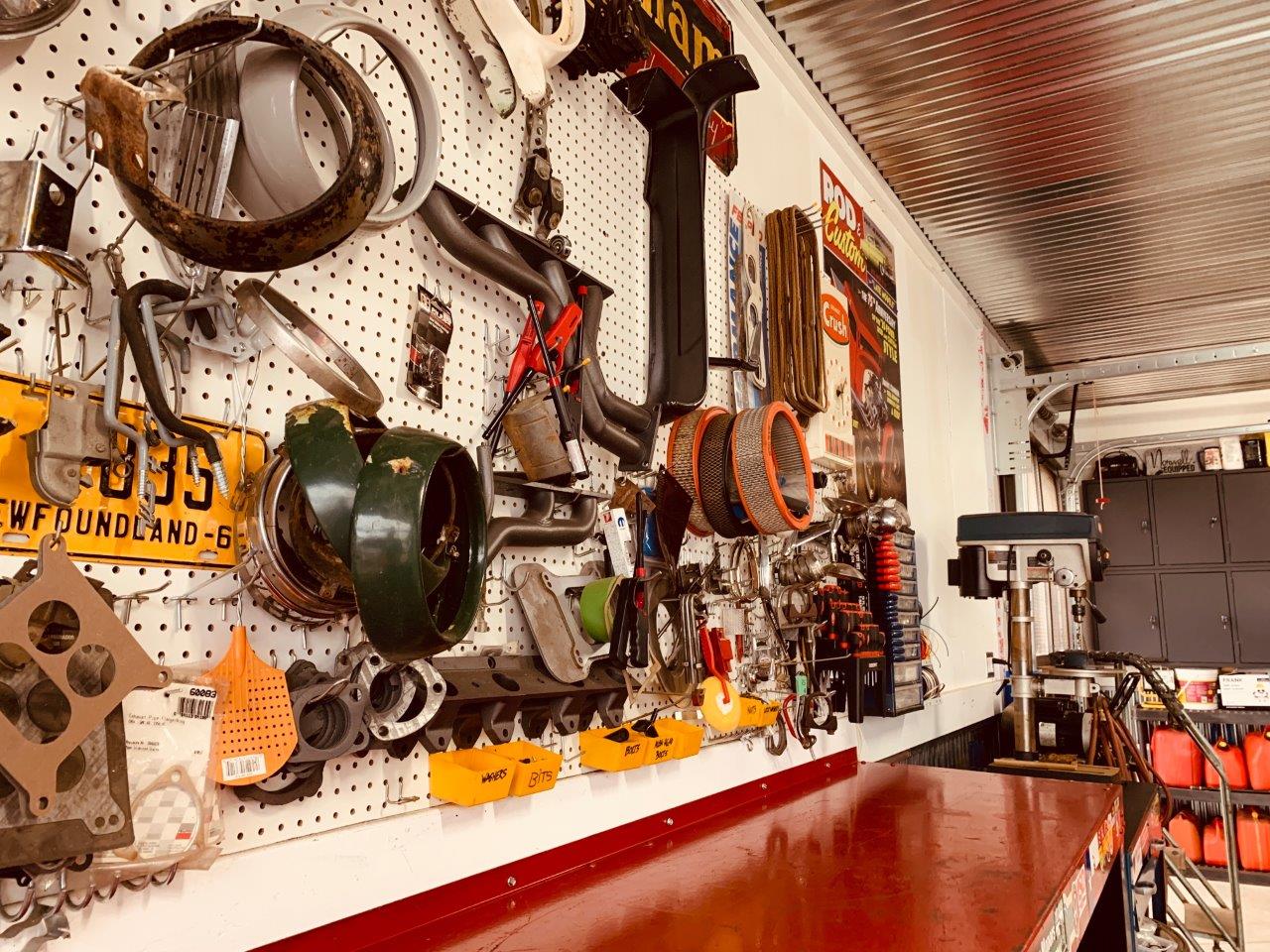 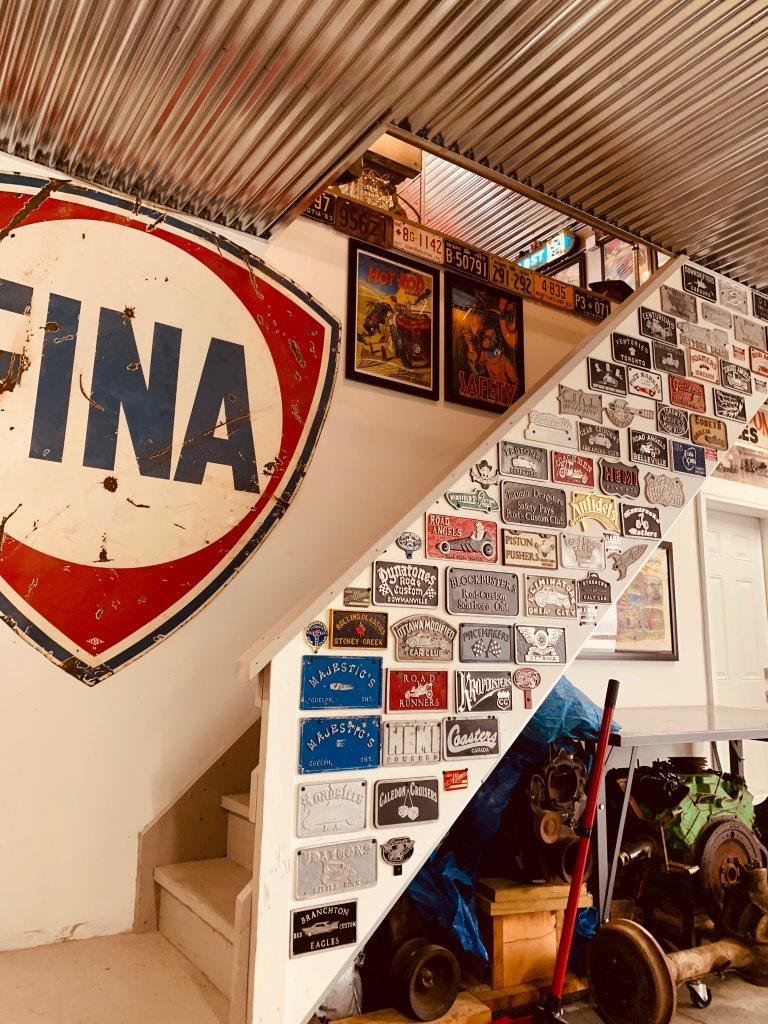 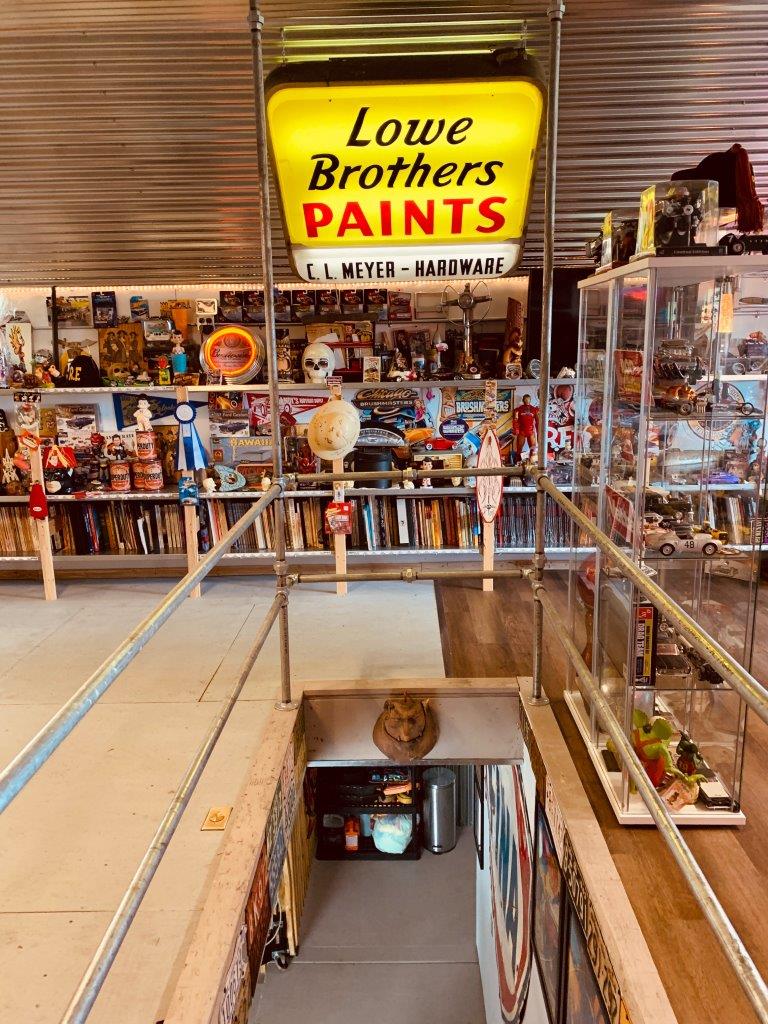 We noticed all types of great memorabilia covering every bit of wall space, including the step riser, so we had to ask about all of those car club plaques.

“About 90 percent of the car club plaques are from Ontario (and other parts of Canada) that go back to the early ’50s. I collect them because I love the history. I’m more interested in my local history. There were just so many car clubs here in the ’50s and ’60s and still are to this day. I get freaked out when rodders don’t care or respect the history.”

We also noticed on the second floor it is set up like a museum, having lots to look at but a few items caught our eye and we asked Norwell to explain. We started with the desk and draftsman table that served as a focal point.

“The desk came from the government of Canada. Well, my mother worked in the senate of the parliament all her life. While in her forties, when I was a little kid, she got that art table for me from the drafting department of the federal government.”

We then asked Norwell to tell us about the ’50s-era couch we noticed.

“I have a very good friend, Rob Purcell, who has a 1932 pickup with a Hemi in it, and he’s a great builder and did a lot of work on the black 1957 Ford of mine. His wife, her grandmother, lives in the next town. She’s 100 years old and that was her brand-new couch around 1958 and the matching little seat that goes with it. I love this couch as it’s the most comfortable I’ve ever slept on.” (We didn’t have the nerve to ask him why he’s sleeping on the couch. Probably goes back to the 1957 Ford going from being his wife’s to not being his wife’s car!) 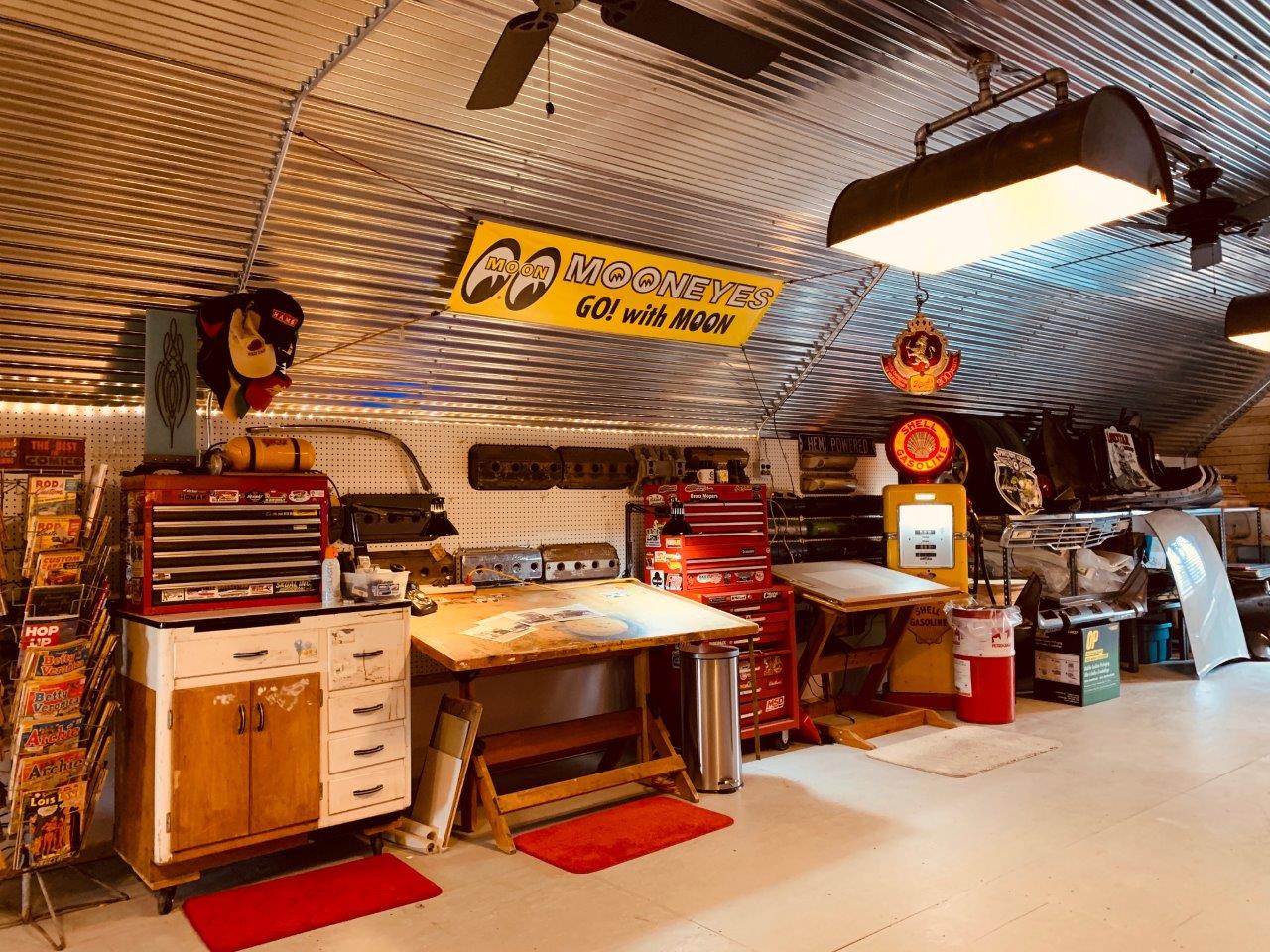 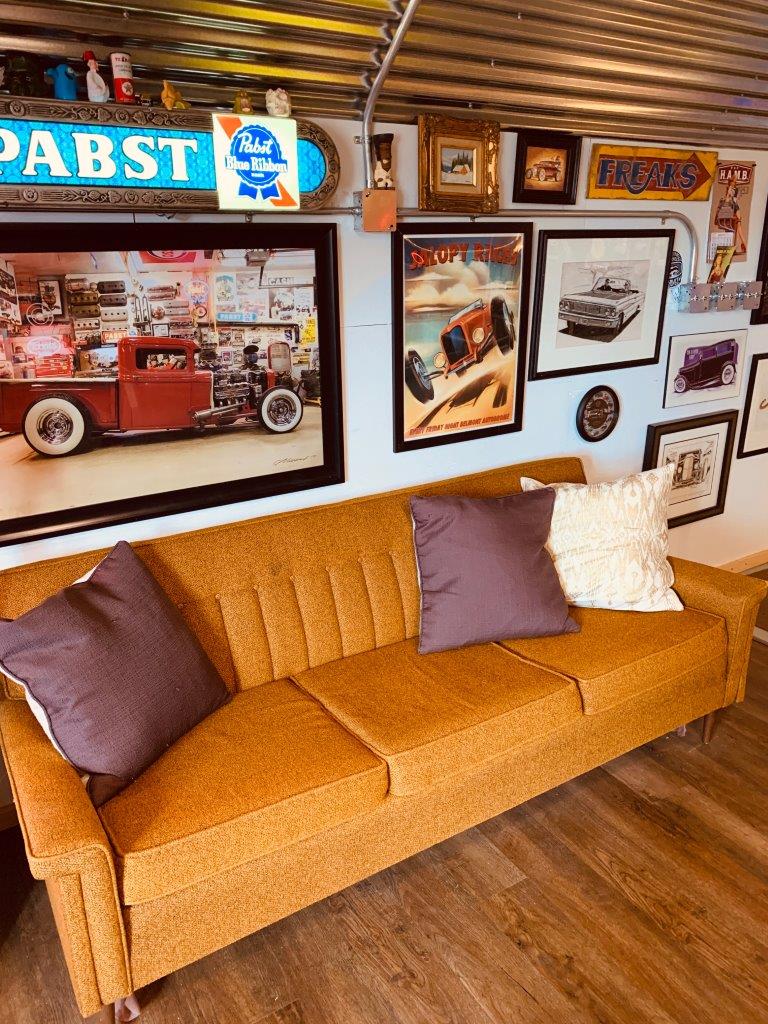 We might guess that the couch serves as an excellent spot to sit down and get comfy while he reads his extensive collection of vintage car magazines. Norwell tells us, “I have probably close to 6,000 magazines. What you see is probably a quarter of what I have. I don’t have any more space, and they’re down in the basement in boxes, liquor boxes, to keep safe. I bought comic book racks and I put as many ’little pages’ on it as I could. I love that kind of stuff, man.”

There is so much more to be seen and spoken about but for now you get the idea that Norwell is a hot rodder’s hot rodder. Should you get the chance to go north of the border give him a call. Odds are he will invite you in to share some great hot rod history. MR

Hot Rodding North of the Border
1 of 26
- Advertisement -