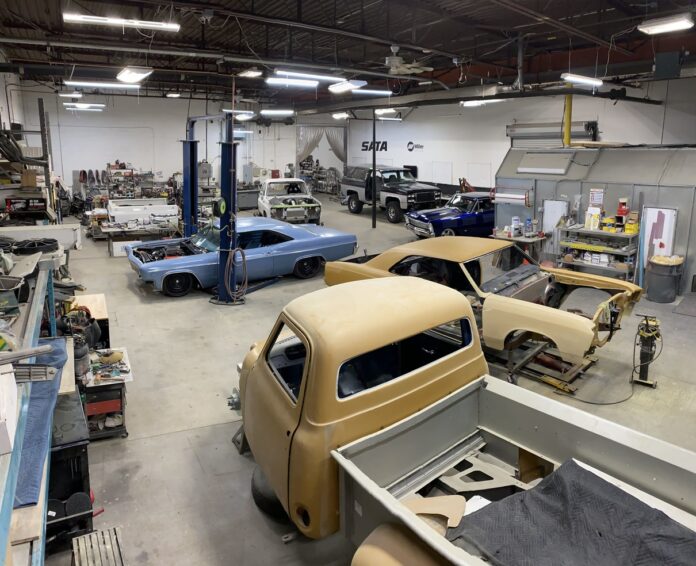 While on the road recently for Classic Truck Performance, our path led us to Chris Cerce Customs in Taunton, Massachusetts, to check out some of the latest projects being worked on for the new season. Upon arrival, we entered the final assembly area and were immediately awestruck by the cool combination of rides being completed.

For Chris, the humble beginnings of opening his first shop 15 years ago in a two-bay garage at his parent’s house started soon after graduating from WyoTech with a specialization in custom paint and fabrication. This led him down an expanding path as his customer base grew, eventually moving to an 800SF space which filled up fast. He settled into the current 9,500 square-foot building seven years ago and the shop floor has been packed ever since. With a style that embodies a classic-contemporary feel, you’ll also find a nod to tradition within many of the projects. Regardless if it’s a cutting-edge truck packed with razor-sharp handling and twin-turbo power, a 100-point muscle car restoration or even tire-searing barn find sleeper, there’s plenty of innovation packed into every build by the team including Chris, Noah Raposa, Erik Camara, and Brandon Martins.

Handling everything from initial concept design to balancing the combination of power and performance, Chris and his team have been able to turn out many notable rides over the years. With a true dedication to custom fabrication there was plenty to see when we delved deeper into many of the in-the-works builds on the floor. A quick tour while being escorted by Layla, the coolest shop dog ever, revealed an alluring red 1965 Chevy C10 with a Roadster Shop Chassis, Don Hardy-built 925hp twin turbo V-8 parked alongside a candy blue 1966 Chevy Nova with a Dart 555ci twin-turbo mill and Holley EFI, both in the final assembly stages.

Stepping deeper into the shop, how about a 1978 Chevy C10 packing a Golen Engine-built 1,400hp LS on a Choppin’ Block full chasss, or maybe a custom 1953 Ford F-100 being body-worked to perfection. Let’s not overlook the 60,000-mile 1966 Chevy Impala barn-find sitting on a custom-scanned Roadster Shop chassis with an 850hp Don Hardy-built supercharged LSA between the ‘rails. We’re just scratching the surface on many of the wicked projects happening so check out all the images and more from our visit. You’ll see plenty of cool stuff from Chris Cerce Customs as time moves forward.

In the Shop: Chris Cerce Customs
1 of 16