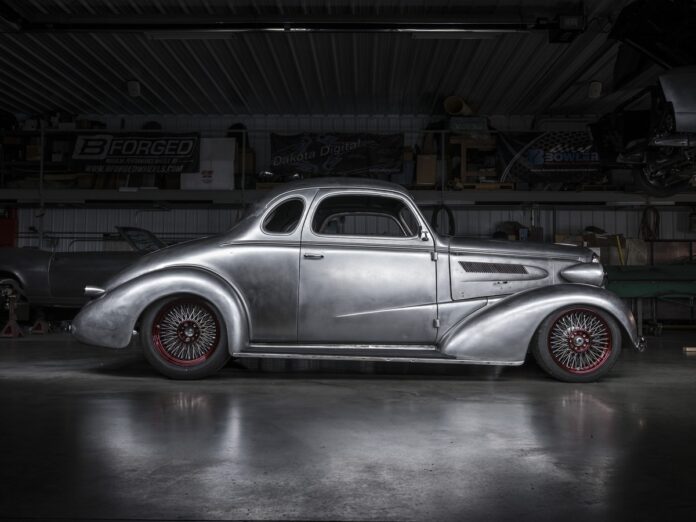 This 1937 Chevy Business Coupe is the Third “Last Project” 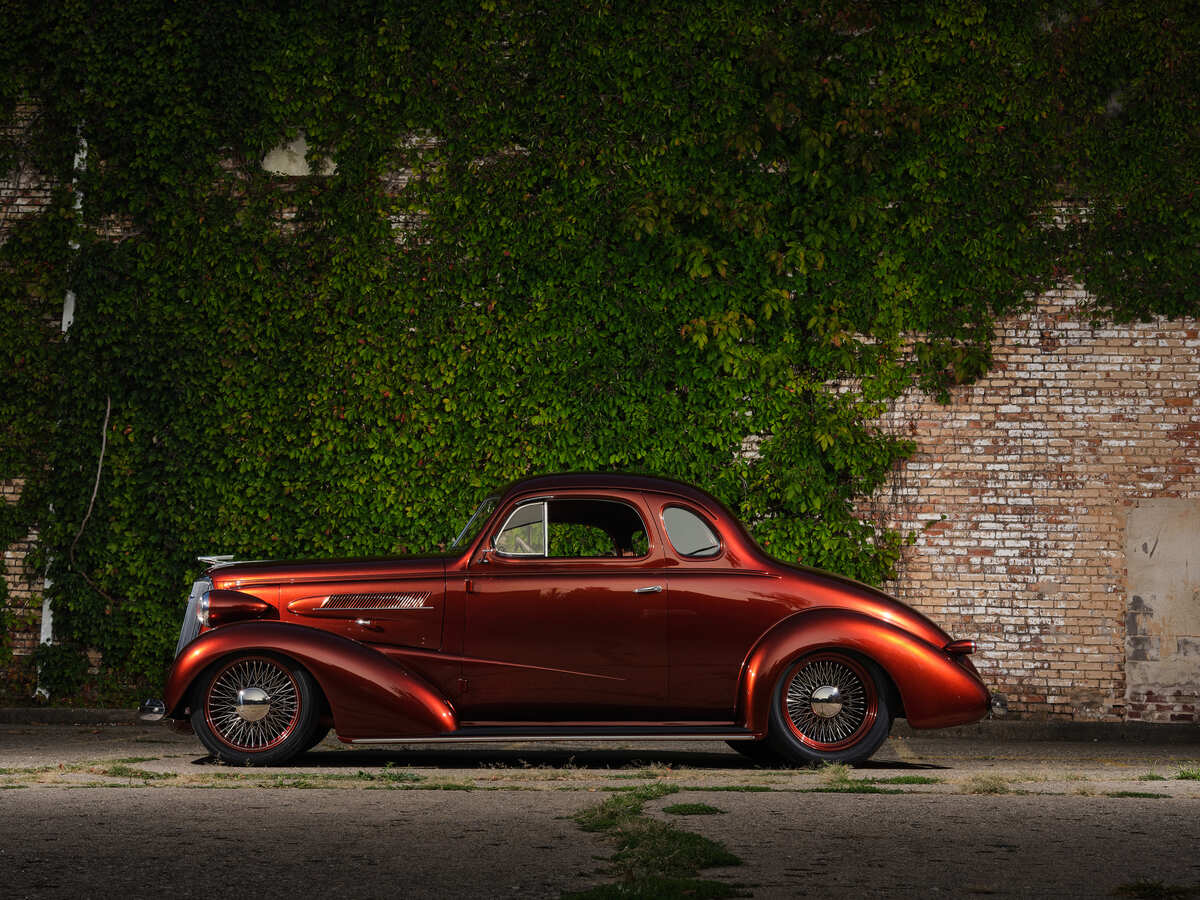 How many times have any of us, or maybe it’s all of us, uttered these famous words: “This is my last project.”? Such is the case for Steve Leon and his 1937 Chevy business coupe. Prior to this Chevy there were two other “last builds,” but that’s how the life of a hot rodder goes.

It’s interesting to listen to Steve tell the story, so we thought we would share his words: 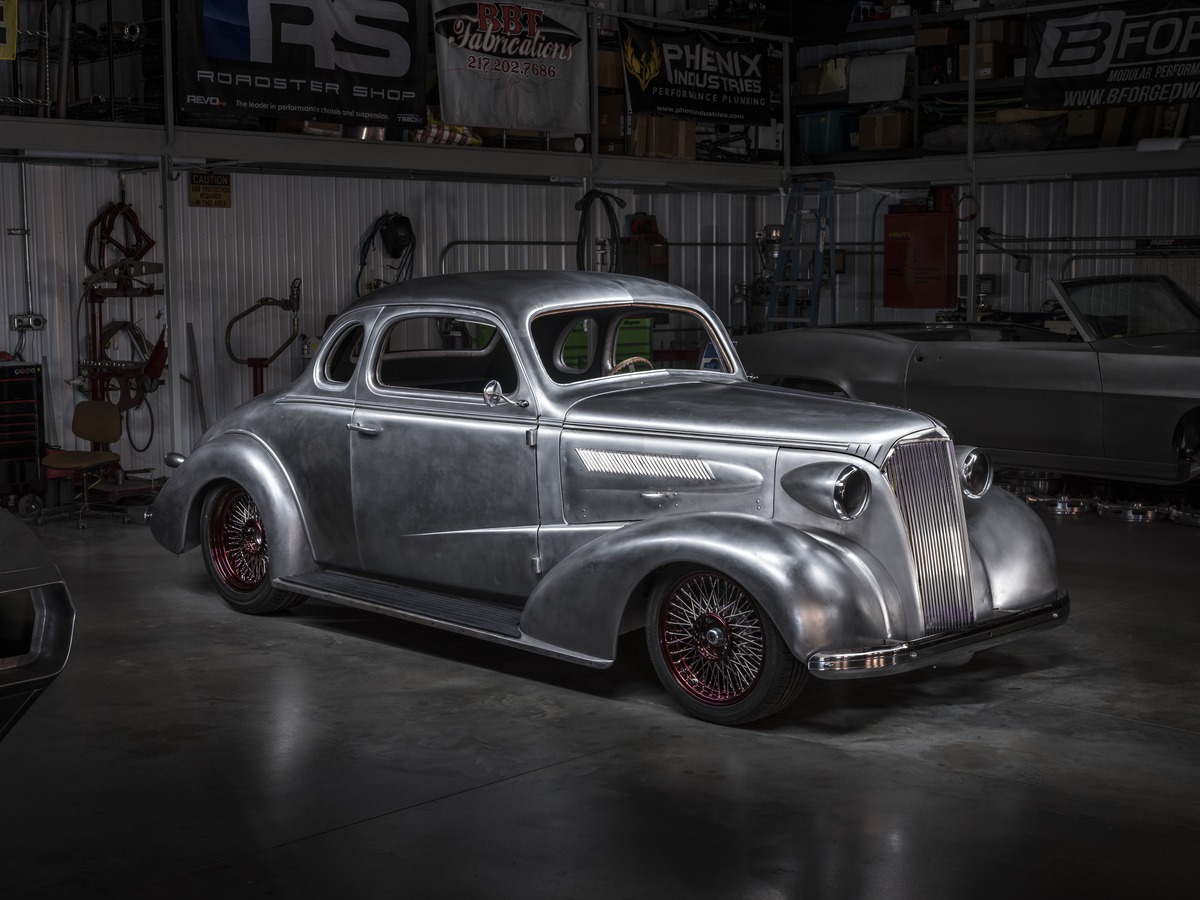 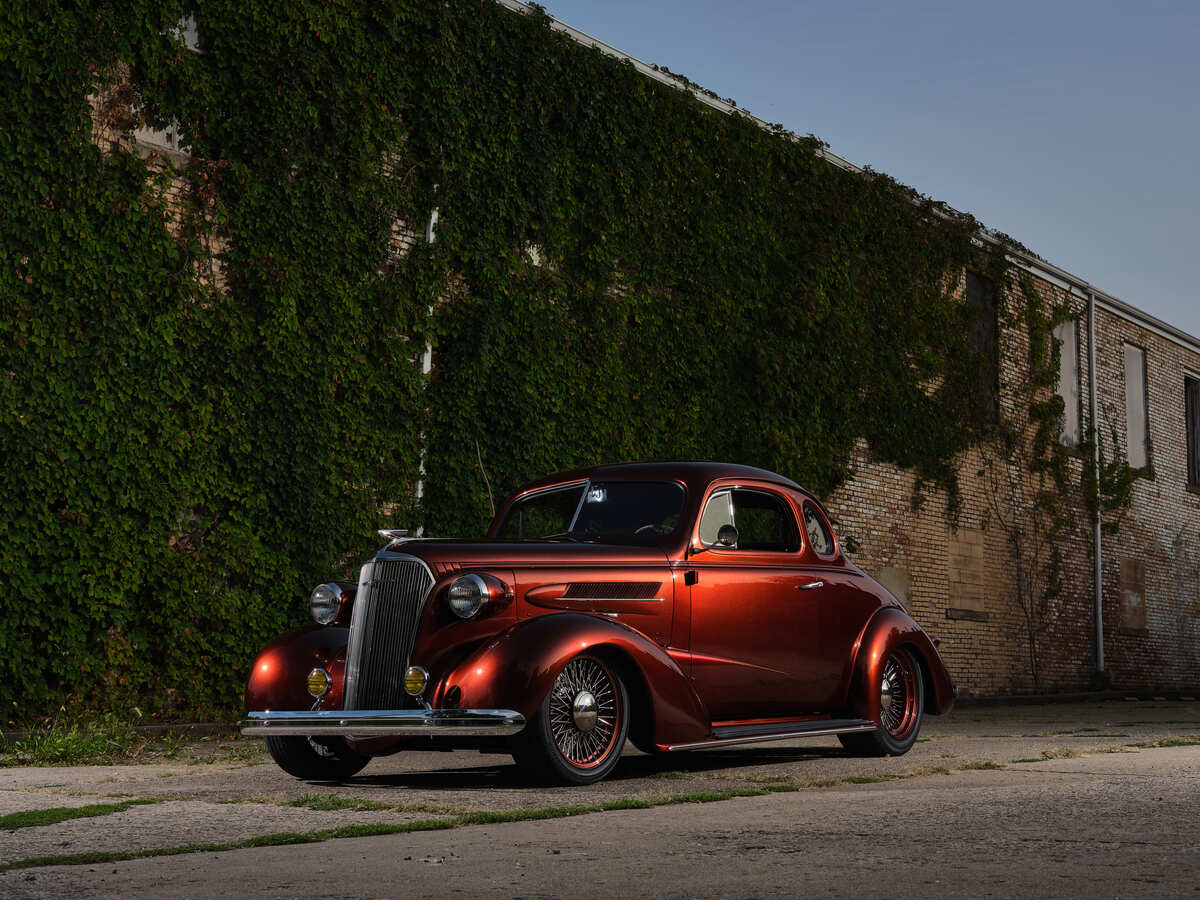 “I needed another project and came upon a stock rebuilt 1949 Chevy pickup. I enjoyed this truck for a good while, using it to do yard work and just driving it around town. I got the itch to do another project and sold the truck. Then I found a 1958 Chevy Fleetside. With the help of John Danner, we rebuilt the 1958 with a few modifications. I still have the truck. At this time in my life I decided that was my last project. I just needed to sit back and enjoy what I had. 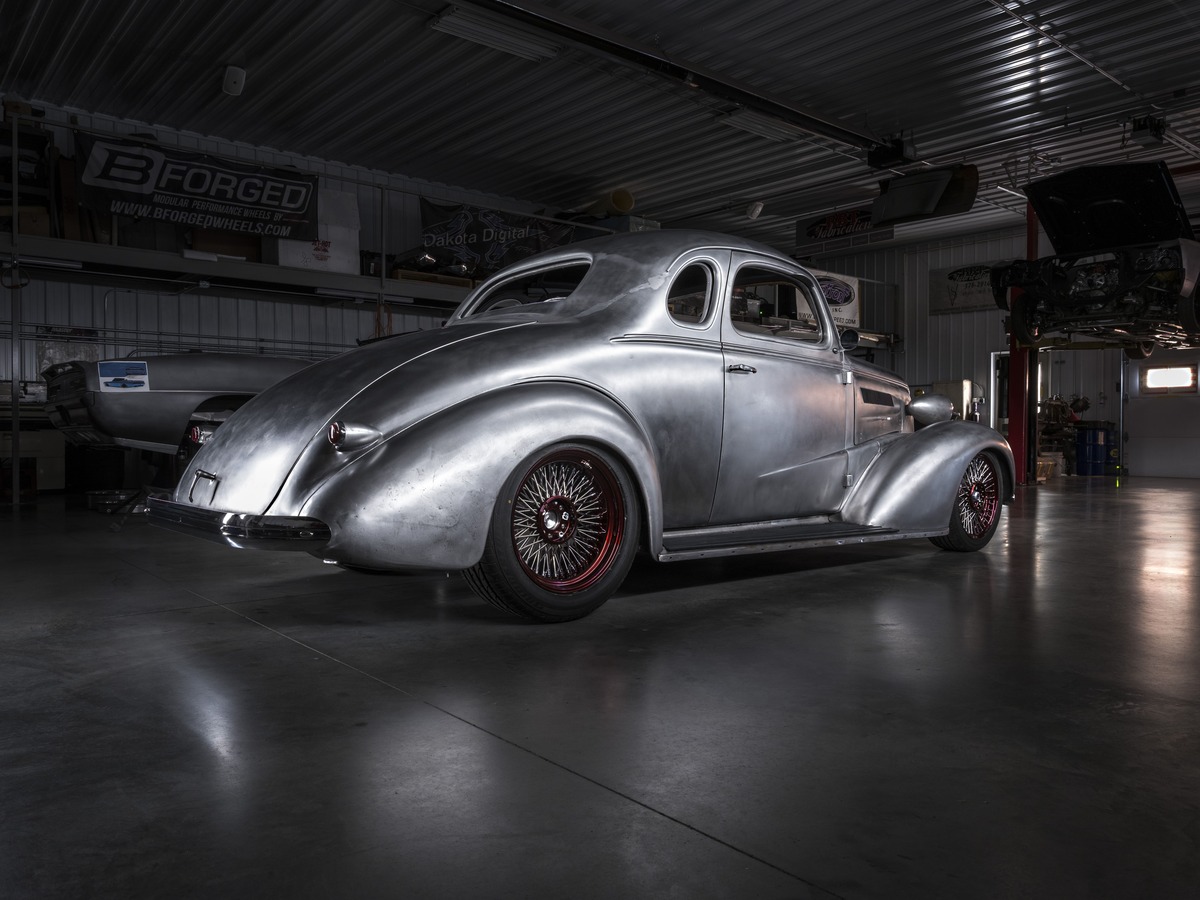 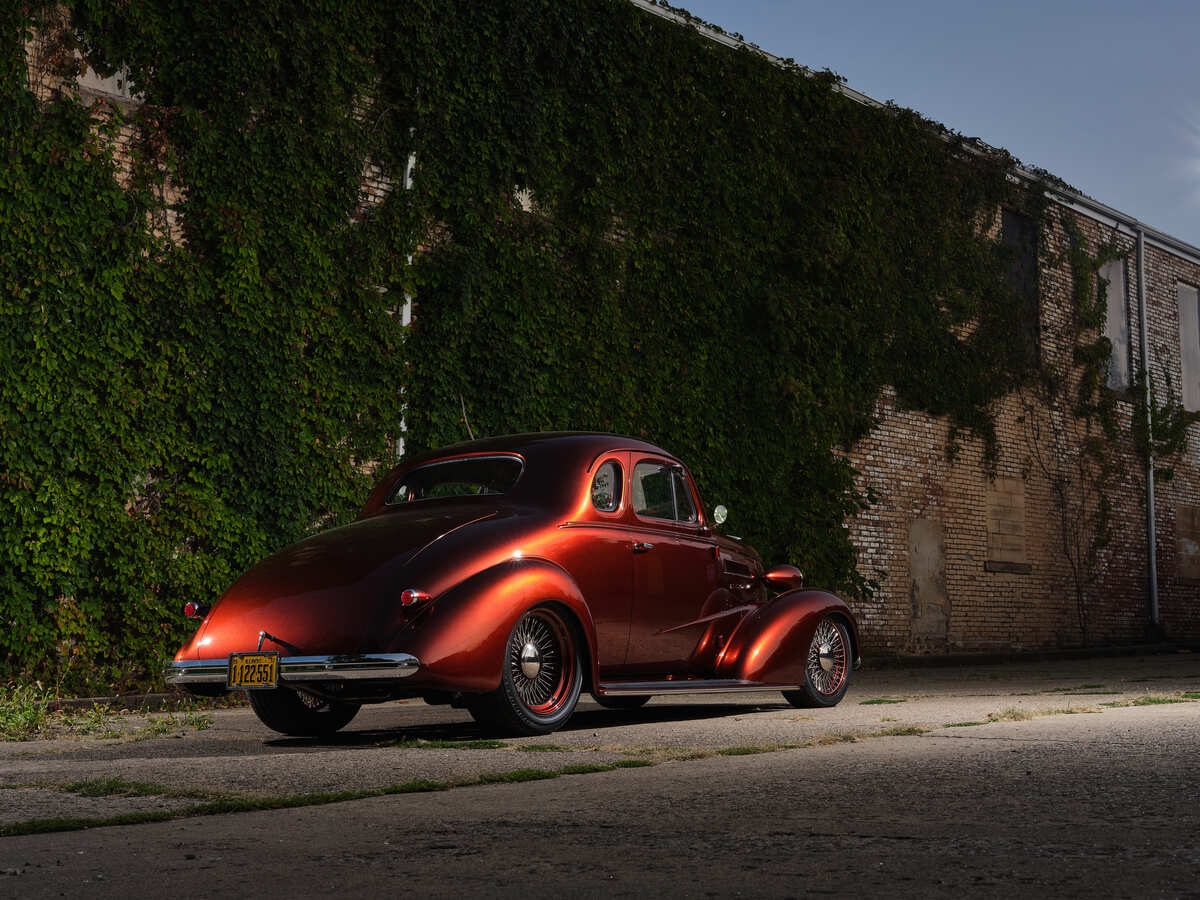 “Well, that didn’t last long. My wife and I were having lunch in a restaurant and a friend

came in and told me a mutual friend had a 1937 Chevy business coupe for sale. I gulped down lunch and called our mutual friend Tony Martin and asked when I could come over and look at the car. He told me that he had another guy who was interested in it who lived in Michigan but

couldn’t come to terms over the $100 difference that he was asking. After looking the car over, I told Tony I would give him the extra $100. The car was mine that day.” 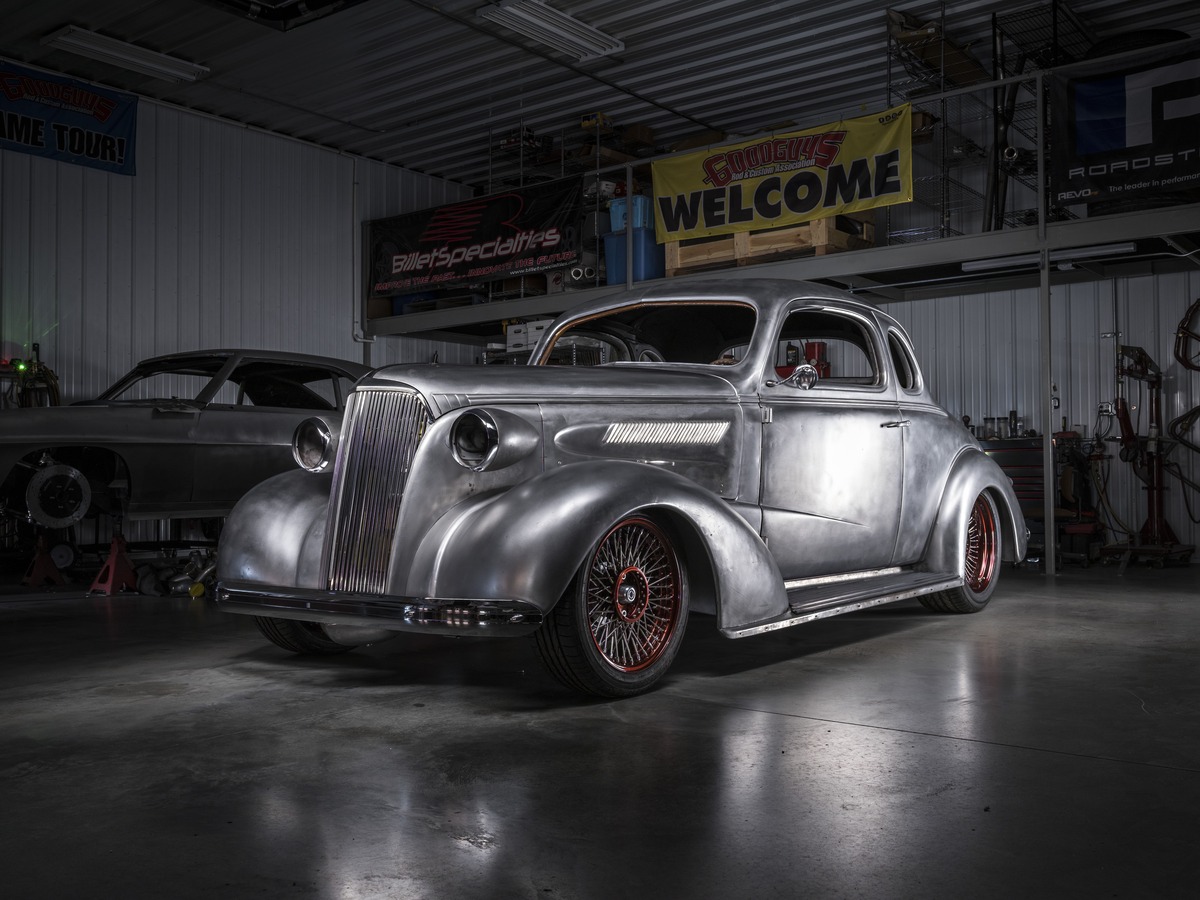 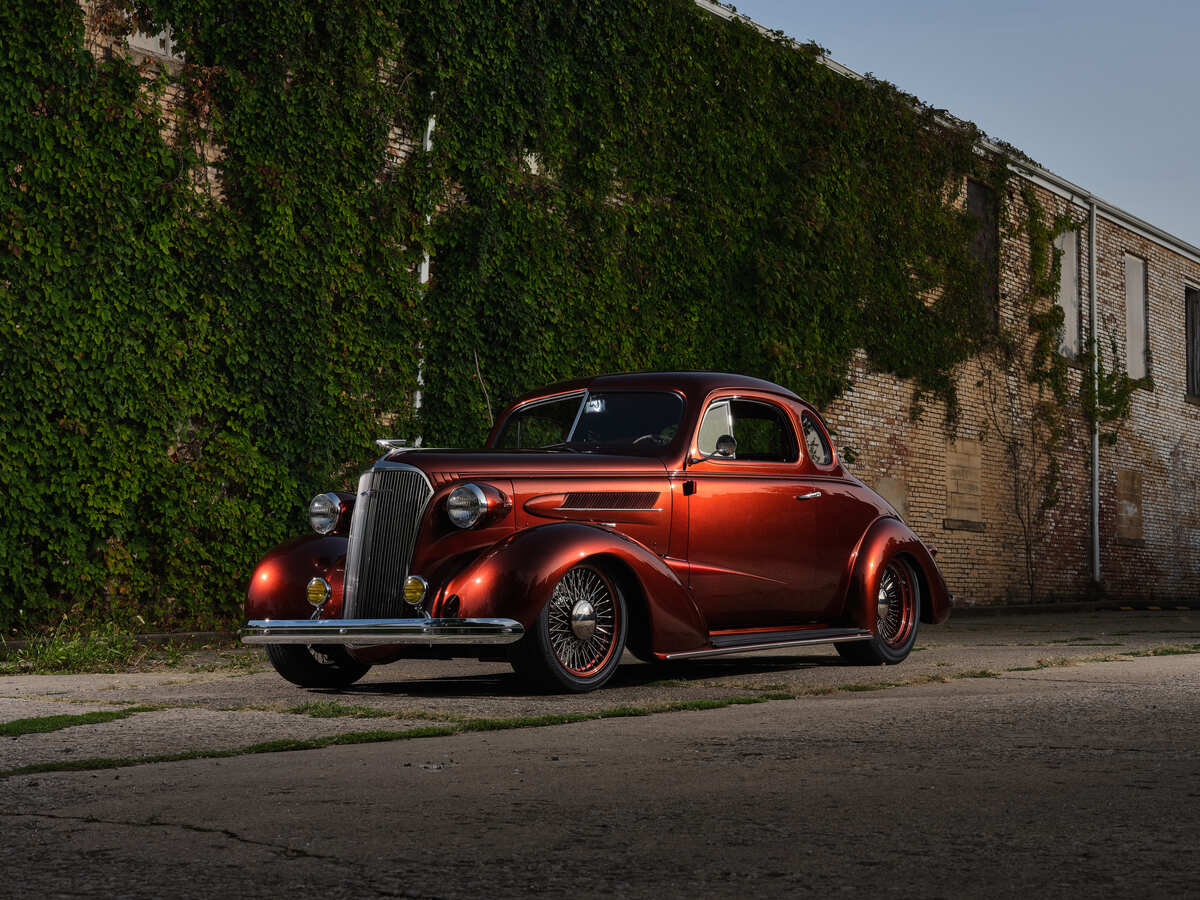 And so goes the whys and wherefores of another street rod project. Another of Steve’s friends, Jim Samson, helped guide Steve in the direction that has led to this 1937 Chevy business coupe. More behind-the-scenes support was given by Steve’s lifelong friend Tom Cler who has helped in previous builds but continues to provide guidance on current projects. Wendy Gillespie of I & I Reproduction (direct manufacturer and supplier of 1929-1972 Chevrolet parts) helped Steve find many of the much-needed Chevy hardware for his business coupe. Steve will also tell you, while there were many who gave invaluable help the “heavy lifting” was handled by Troy Gudgel of BBT Fabrications in Mahomet, Illinois. 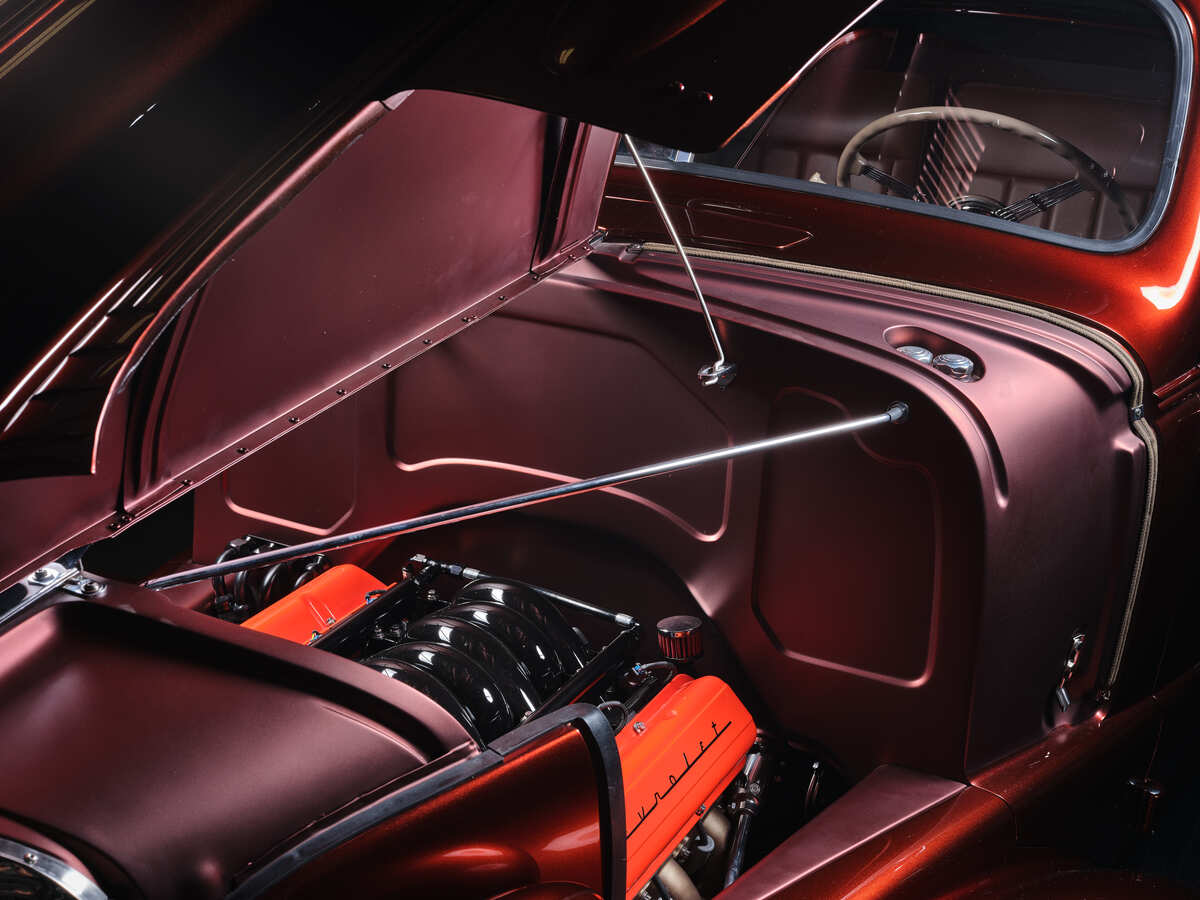 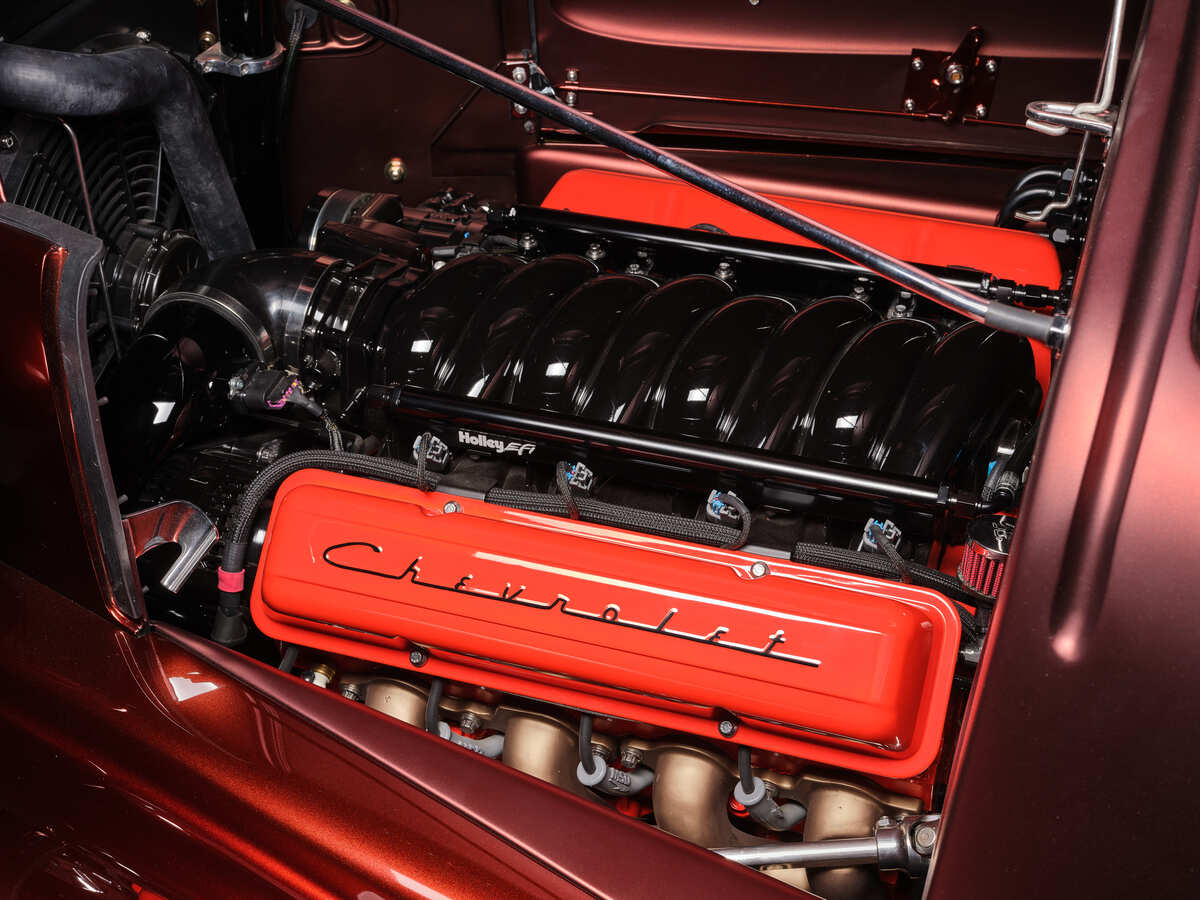 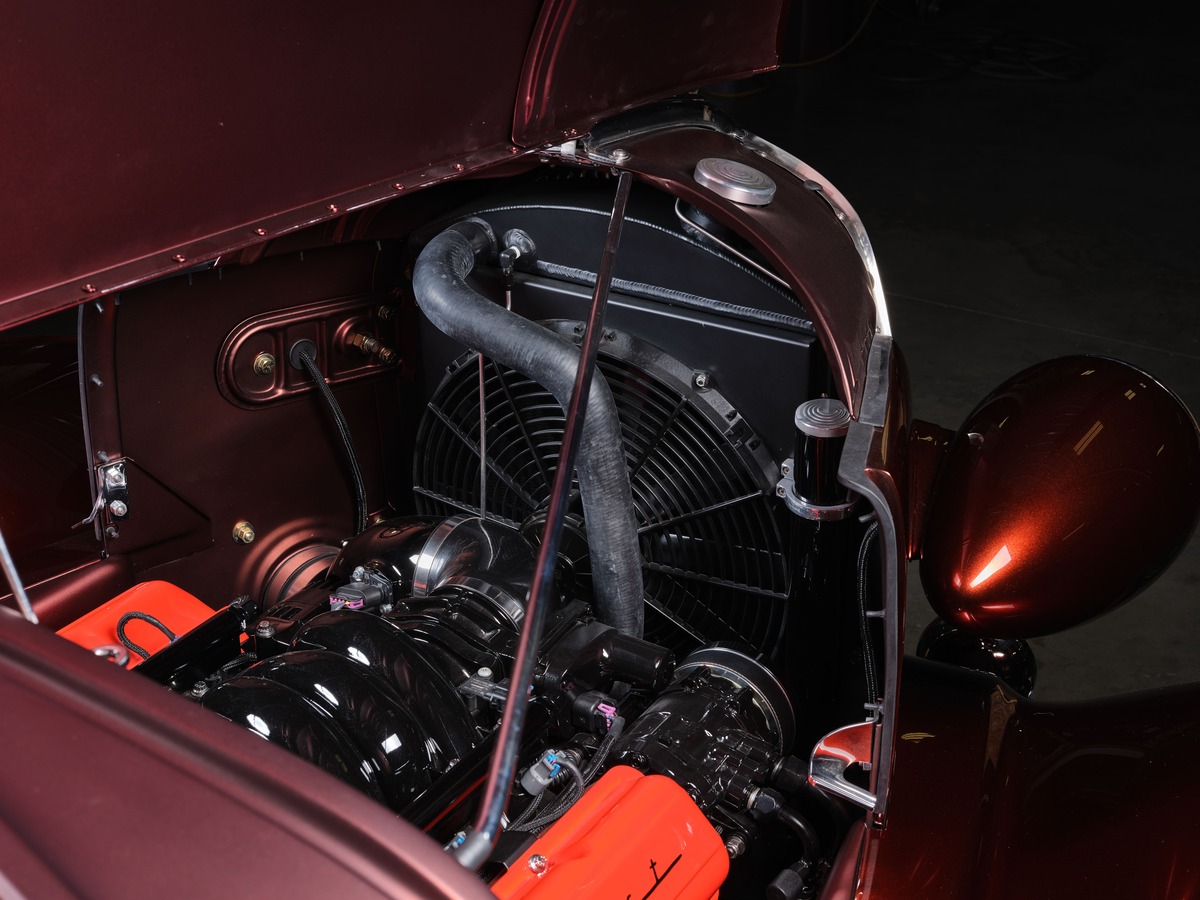 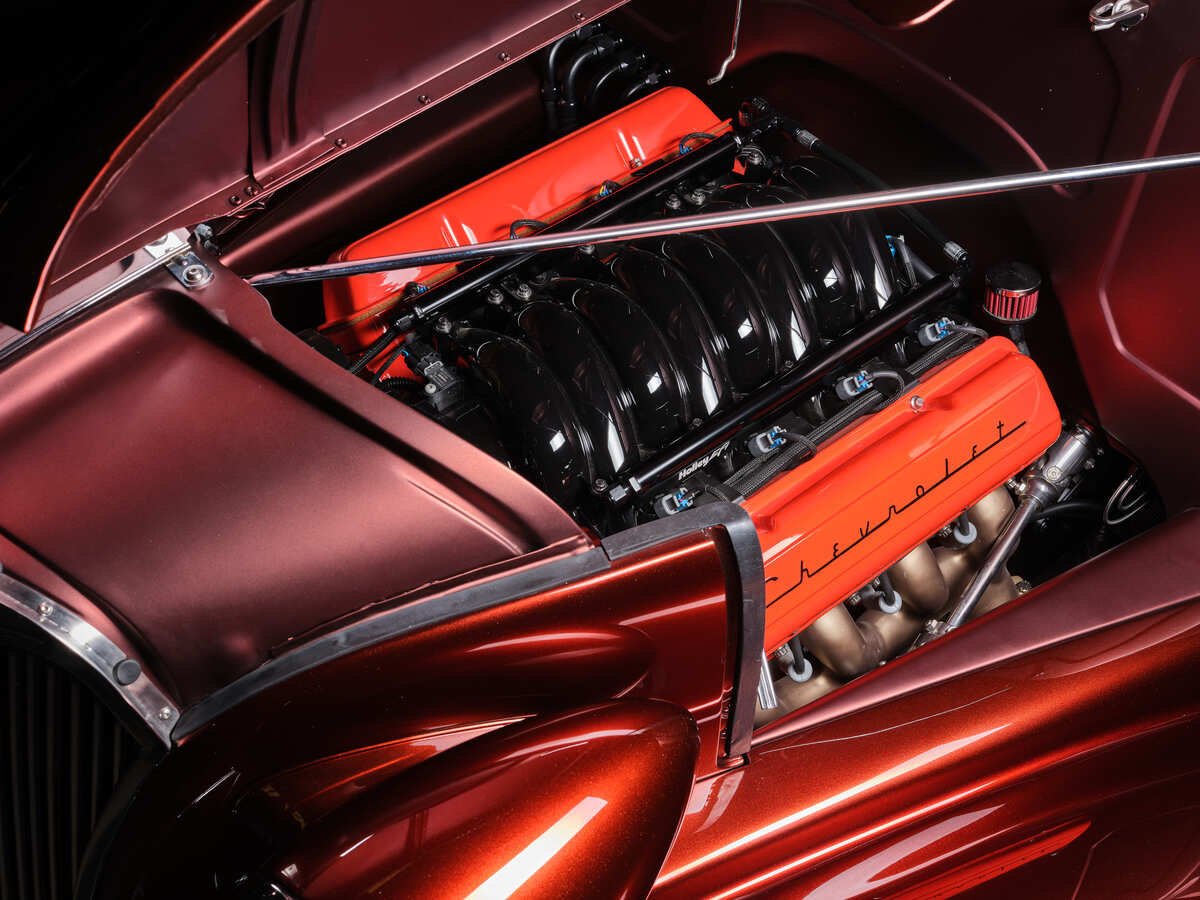 The basis for this 1937 Chevy business coupe is a Roadster Shop (RS) REVO chassis that’s set up for an aluminum 430hp LS3 V-8 (with a Speartech ECU), capped with a Holley EFI and backed up to a 4L75E overdrive chilled by an Earl’s trans cooler and shifted by a Lokar gear selector. Escaping engine exhaust is handled by a pair of Hooker headers dumping into 2 ½-inch stainless exhaust pipes running in and out of a pair of Borla ProXS mufflers. Keeping the V-8’s cool falls to a SPAL electric fan while a Vintage Air Front Runner is in charge of the alternator and other serpentine belt driven accessories. 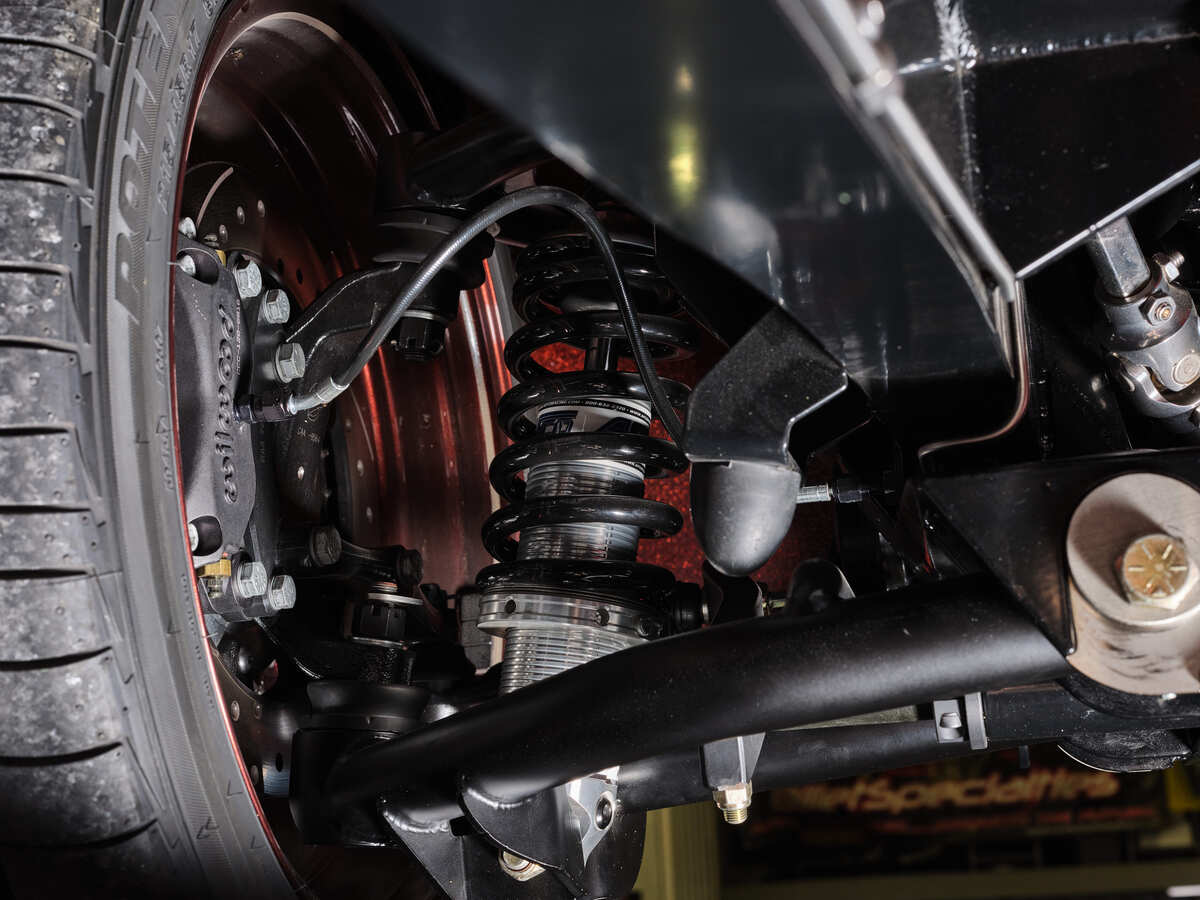 The RS REVO chassis was massaged by stretching the wheelbase in front to allow for the axle centerline to be moved forward/centered in the wheelwell. Other RS chassis choices include front-mounted Wilwood spindles along with Wilwood Dynalite four-piston calipers and 12-inch drilled/slotted rotors along with AFCO adjustable coilover shocks all located at the corners. Other corner choices include Dayton wire wheels, sized 18×7 in front and 18×10 in back, enfolded with Bridgestone rubber, measuring 235/45R18 and 295/45R/18. In back is the RS four-link rear suspension that secures the Strange Engineering 9-inch axle housing embracing 3.55 gears along with Strange axles.

The REVO IFS has proven to be a strong point as its “fresh” geometry no longer relies on the yesteryear Mustang II design. The main points of the REVO IFS are controlled roll centers, the elimination of bumpsteer, and through the use of modern technology the optimized camber and caster curves. The outcome of this modern engineering is 5 ½ inches of wheel travel with positive and negative bumpstops. This 1937 Chevy coupe sure doesn’t ride like any 1937 Chevy from the past! 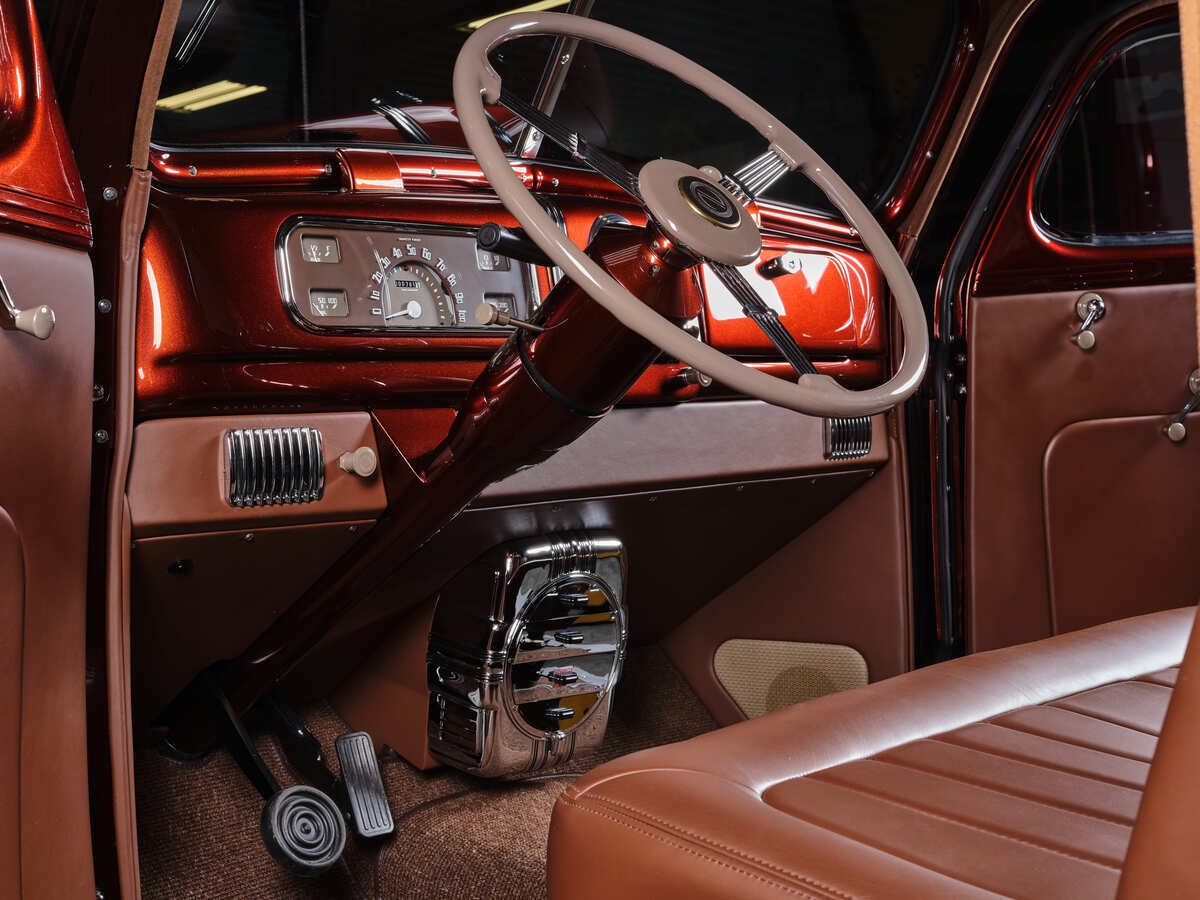 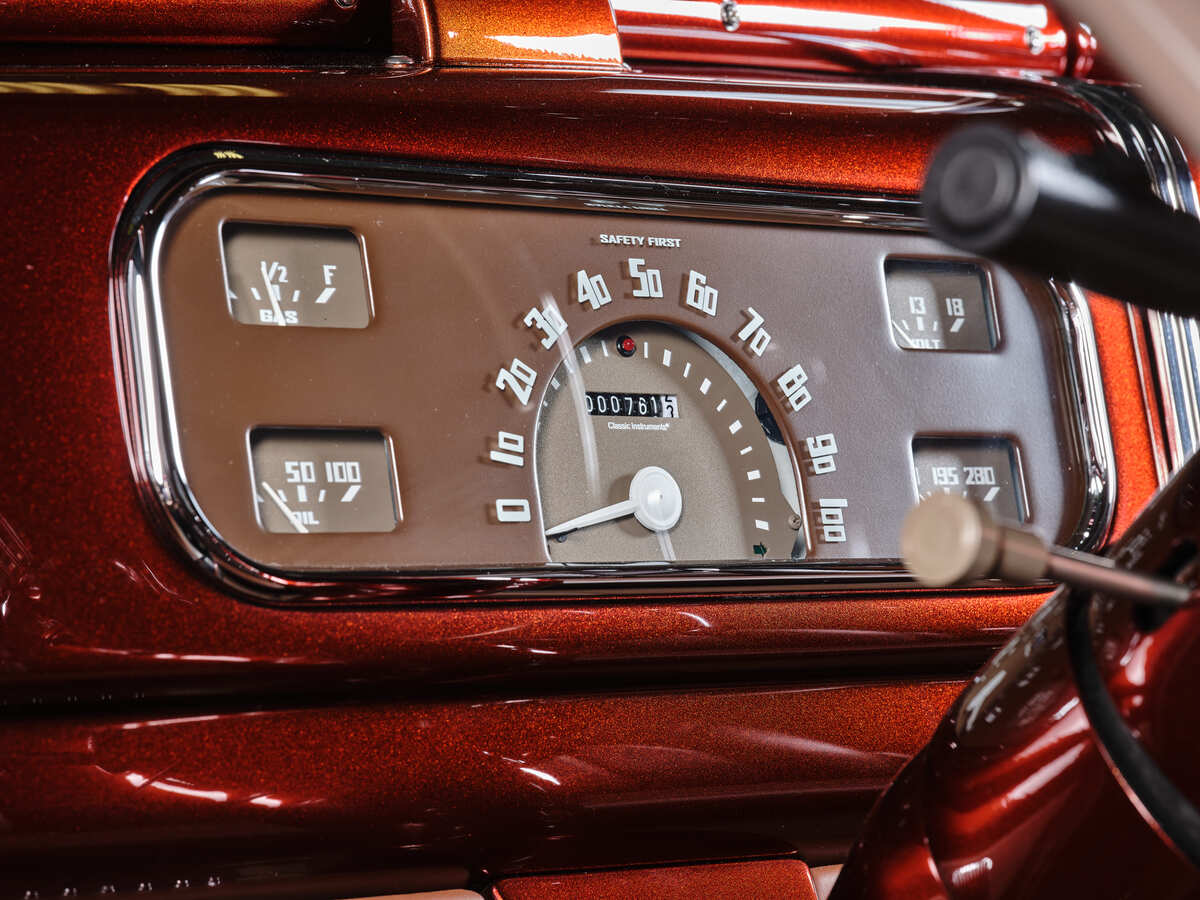 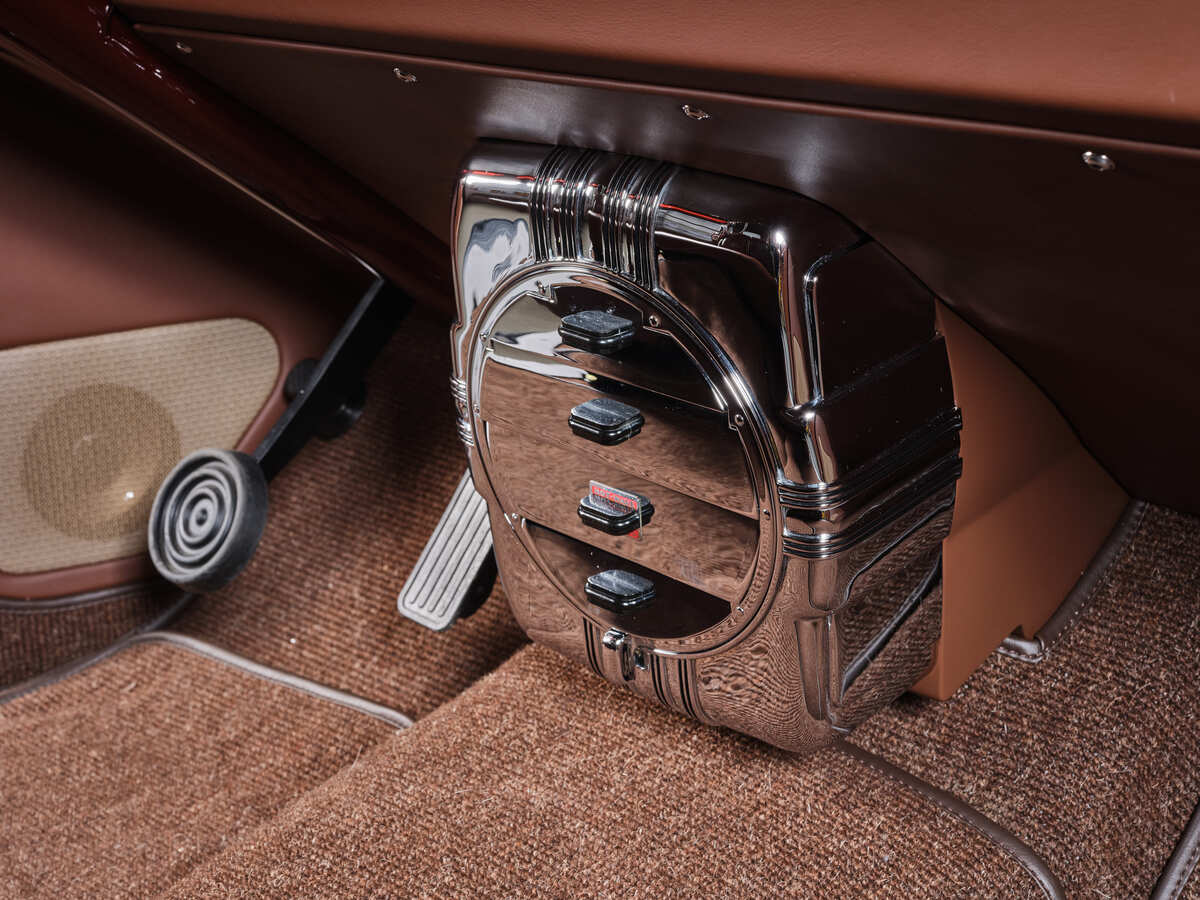 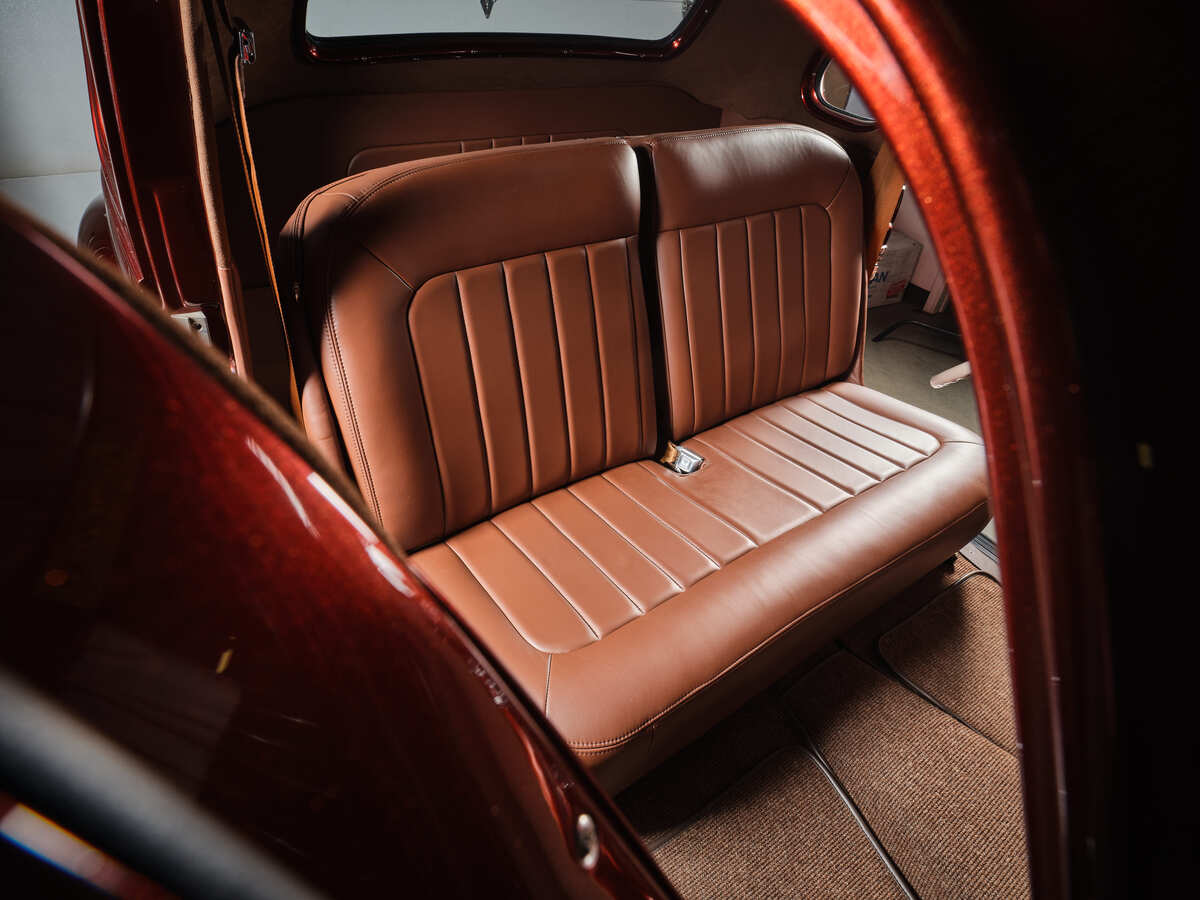 The interior does show off an ididit steering column, a restored stock 1937 Chevy wheel, the stock gauge cluster and housing reworked by the custom shop at Classic Instruments, a sub-dash panel that houses a headlight switch, and a pair of A/C vents that route the Vintage Air cool and heat air. Generating the necessary “juice” is an Optima battery while an American Autowire system links all of the electric components together as wired into position by the team at BBT Fabrications. The stock bench seat is upholstered in brown leather while overhead a suede headliner was positioned and followed with brown square-weave carpeting. All of this expert effort came from the sewing machine of Brian Bhode of Bhode’s Custom Auto Interiors shop. 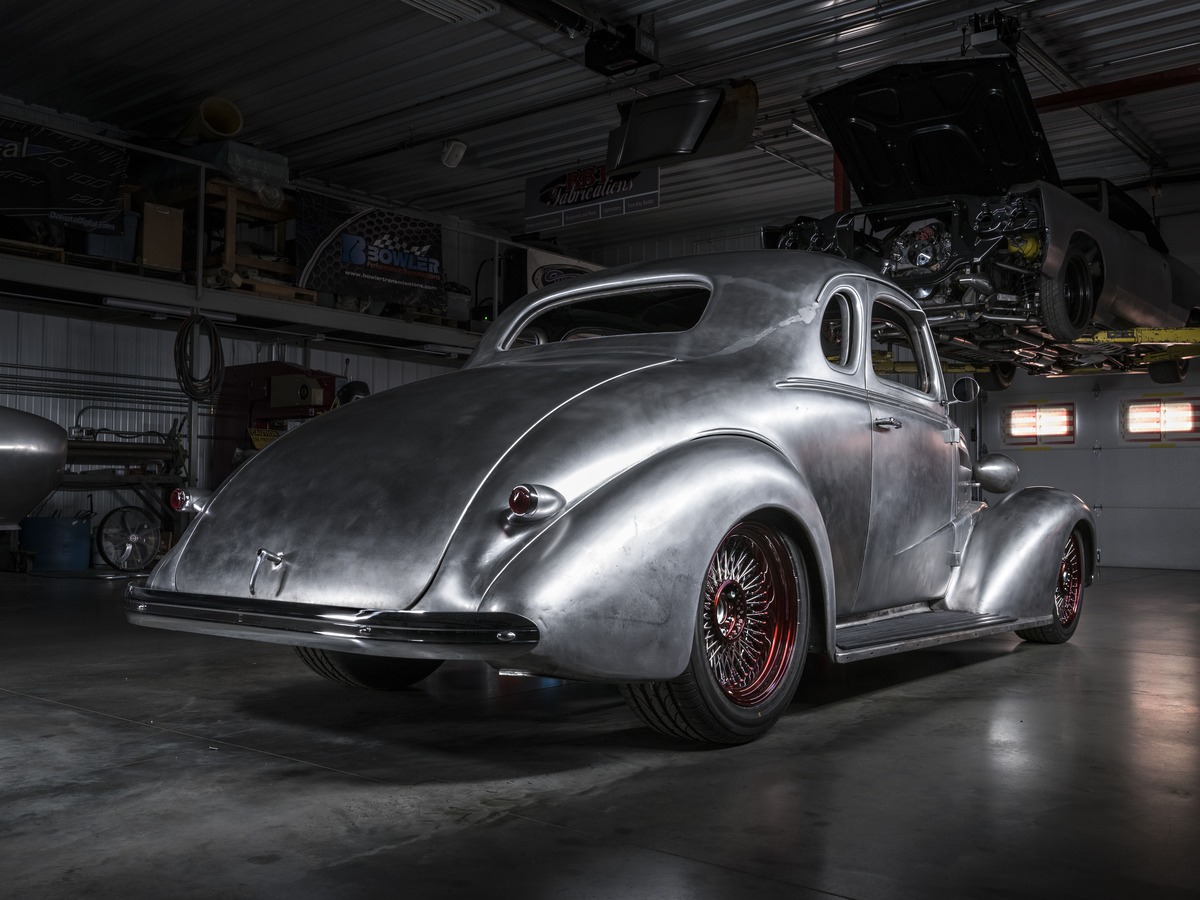 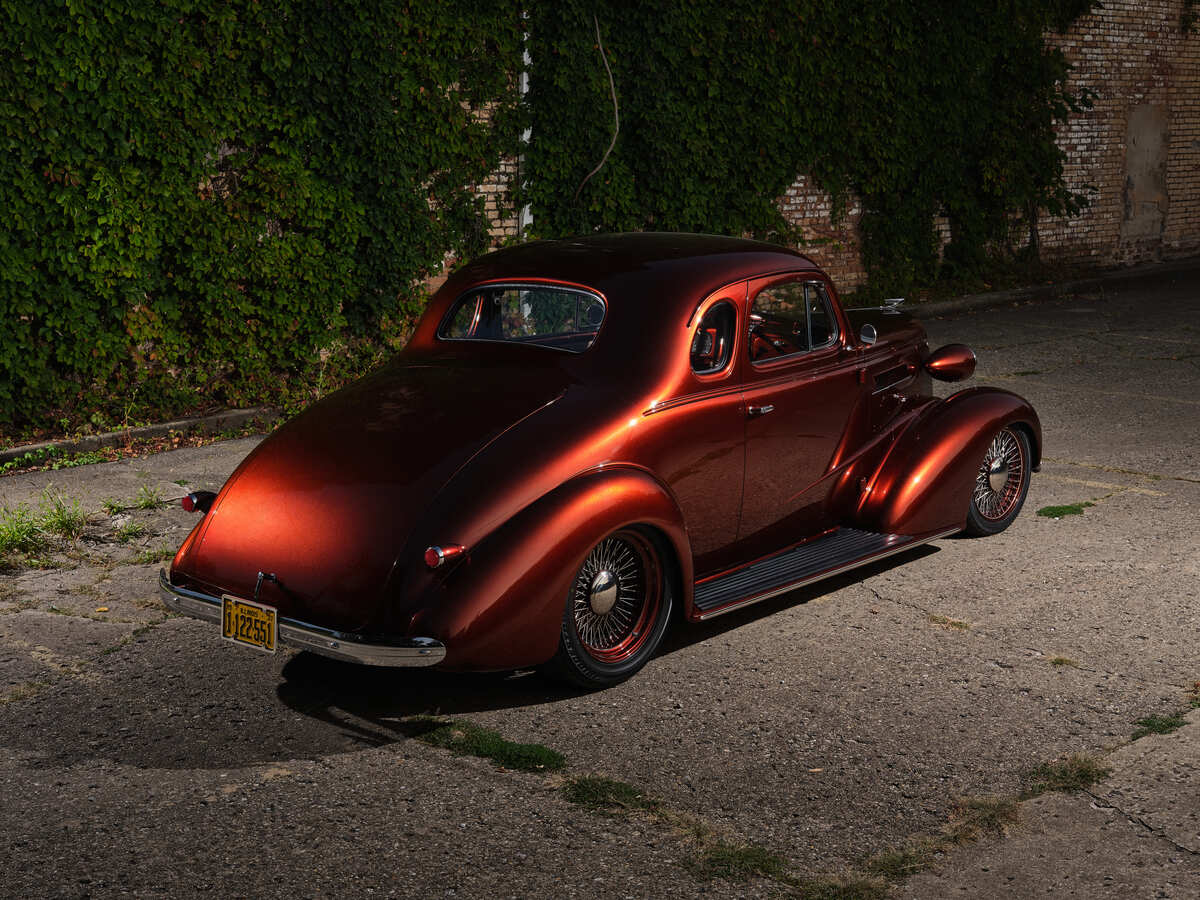 The PPG Cinnamon was sprayed over the revised 1937 Chevy business coupe that features a handful of sheetmetal mods by BBT Fabrications. These personalized changes include the deletion of the antenna and gas filler while the front and rear bumpers were exchanged for 1939 Chevys and pulled in tight to the body. Look closely and you can see that all of the body panels were neatly gapped during the metalwork and final fitment stages by BBT Fabrications. The bodywork and paint fell to our longtime friend and fellow hot rodder Jason Graham of Hot Rods and Cool Customs who has this paint thing figured out oh so well.

Nowadays when one looks at a piece of vintage tin it may appear to be old sheetmetal, and it probably is, but the powertrain and the suspension feature the latest in know-how. The driving and handling are second to none, making these hot rods a pure joy to command and very capable of keeping up with today’s driving demands. MR