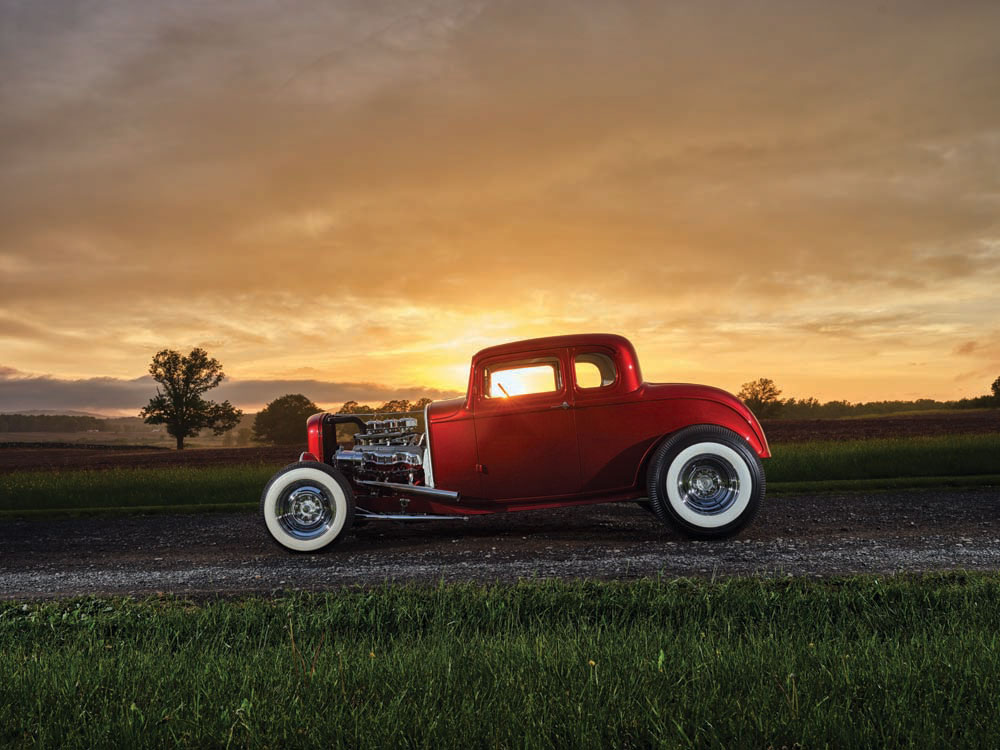 How does a guy who restores Italian exotics end up with a 1932 Ford? “My dad was an autobody man for a shop in Queens (New York),” Chuck Wray says. “We didn’t have much money. So I read used hot rod magazines that I got from the guys in the shop and I fell in love with the hot rods I saw in the little books, like Rod & Custom and Rodding and Re-styling. I liked that late-’50s/early-’60s look. 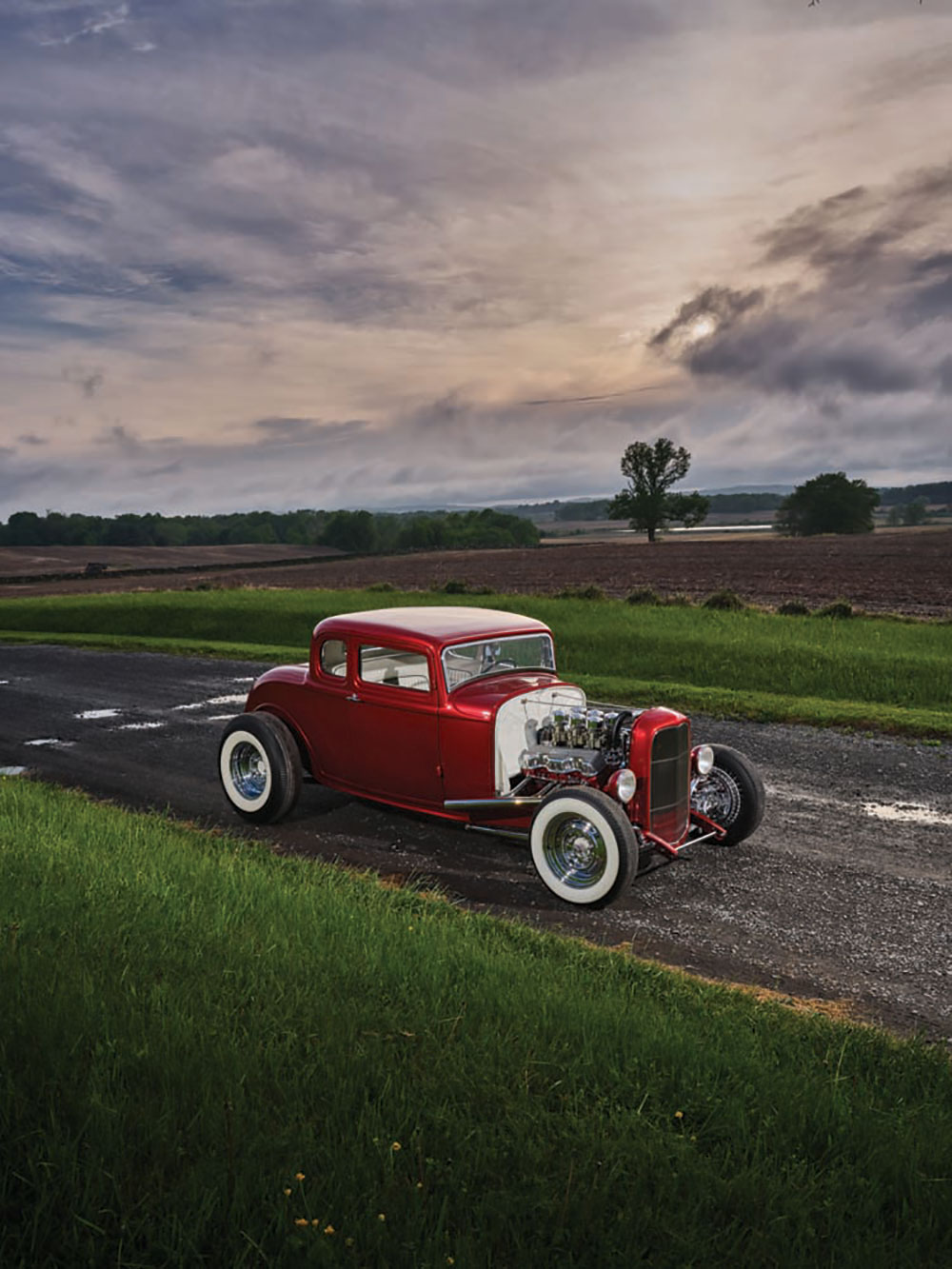 “I became a restorer,” Chuck continues, “mostly working on Italian exotics. Back in 1995, you [Ken Gross] wrote an article in The Rodder’s Journal about a chopped-and-channeled 1932 five-window highboy coupe that was built by Donn Lowe in Oregon. When I saw that car I was just blown away. I wanted to build the car I thought they should have used in American Graffiti. I never liked Milner’s Deuce Coupe. So, when I saw Donn Lowe’s car, I felt that was what they should have used in the movie.”

But Chuck had a few different ideas. 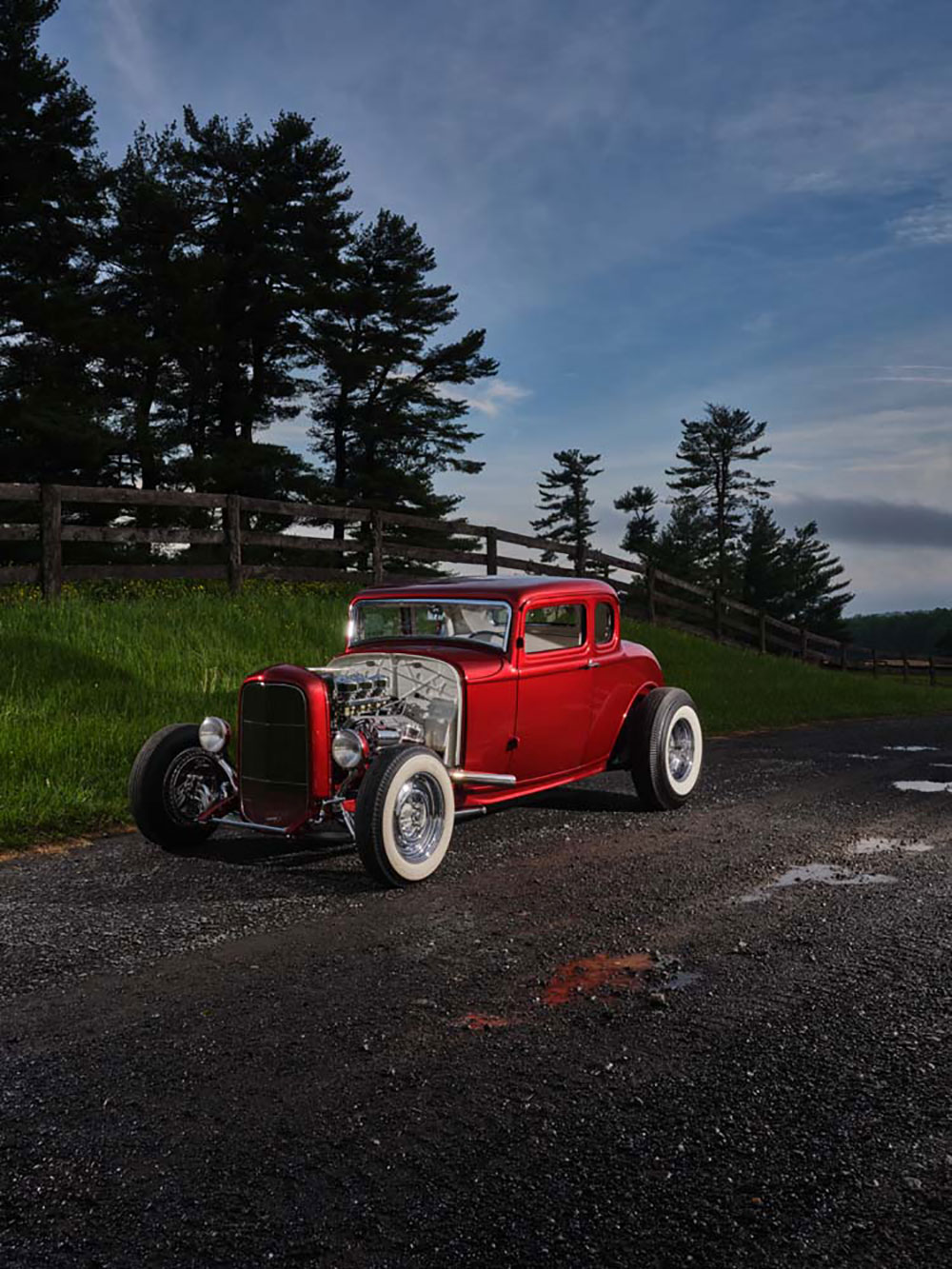 “I loved that red coupe, but I thought if I built it I’d probably put a 409 engine in it–I have a thing for 348s and 409s. I went out to visit Donn Lowe in Oregon to start the project, but the money I’d set aside got repurposed so I couldn’t make it happen. Twenty years went by. I was always casually looking for a 1932 Deuce Coupe steel body shell. Finally, my friend Mike Limerez found an original body. Meanwhile, I kept seeing articles about this guy Bobby Hilton and I liked what he was building.”

Read More: Ford Never Had This in Mind When Designing the 1971 Ford Ranchero 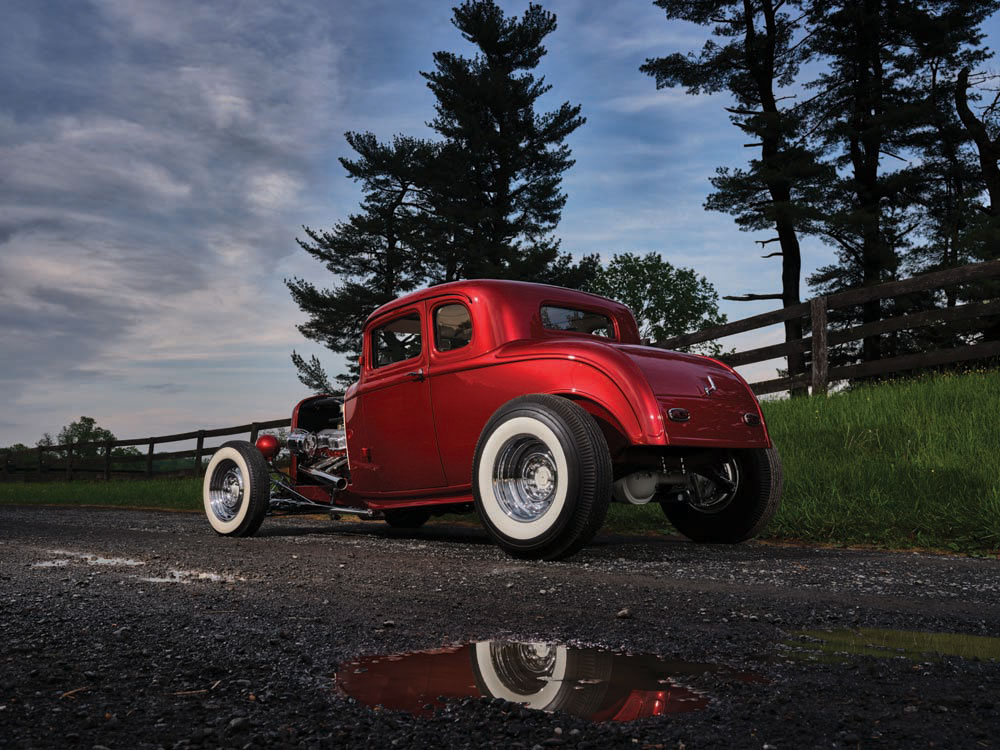 Chuck realized he’d be better off working with a hot rod builder than trying to build a car by himself. “I can restore Ferraris and Isos all day long, but I could never find time to build a hot rod. Five minutes after I met [Hilton], who’s a pretty contagious guy, this highboy coupe project was underway. He’s a ‘real deal’ hot rodder, so I knew it would get done.”

This old coupe looks like it’s on fire and there’s a story there, too. “I originally wanted it to be yellow,” Chuck says. “But [Hilton] didn’t like that. Then I decided on a 1961-1962-era candy color. [Hilton] introduced me to Tuki (aka Travis Hess, of Bucky’s Limited in Martinsburg, West Virginia). [Hess] started with a Cinder Red base and topped it with five coats of House of Kolor Candy Tangerine.” It practically glows in the dark. 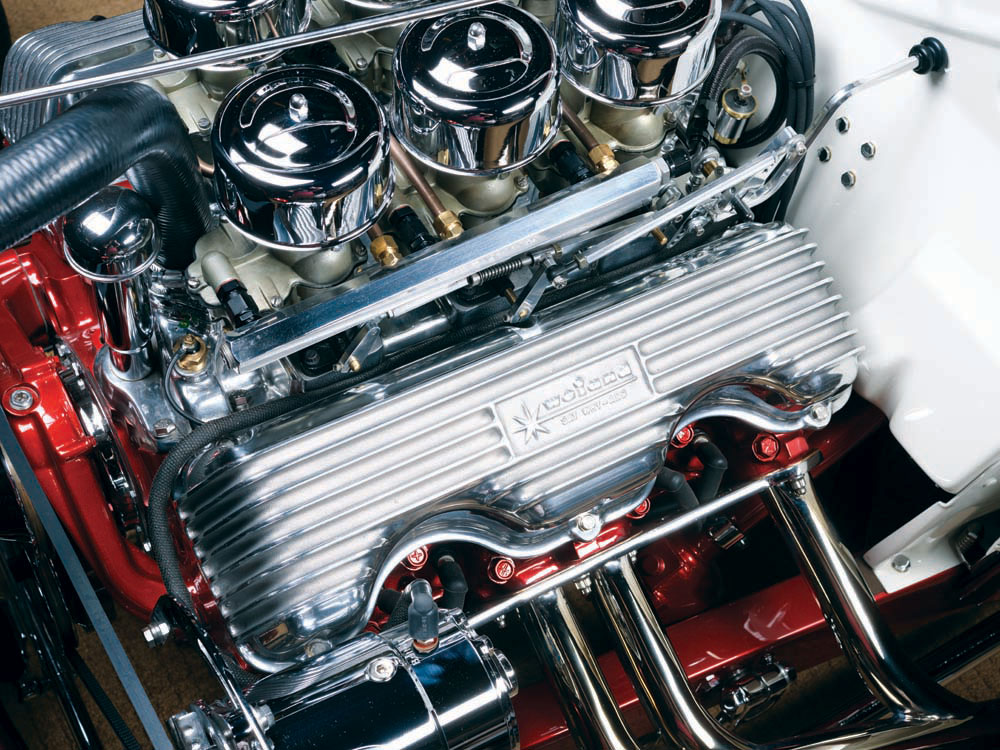 Chuck had the initial vision for this car, but he was busy with his own restoration shop. “[Hilton] took over the project,” Chuck says, “and gave me exactly what I wanted. All I had to do was visit him from time to time and write checks. He nailed exactly what I was looking for–a car that I would have liked to have seen on the cover of one of the ’little books.’”

The result is a period-correct chopped-and-channeled East Coast-style 5-Window Coupe, but there’s a lot of subtle trickery here. Hilton explains: “Chuck saw some of my ’Angry’ Model As, and he already had that vision of the Donn Lowe car. So, we talked, and he said ‘go for it.’” That’s exactly the kind of commission Hilton likes. “My mind works in a thousand ways. So, this car’s got all the bells and whistles.” 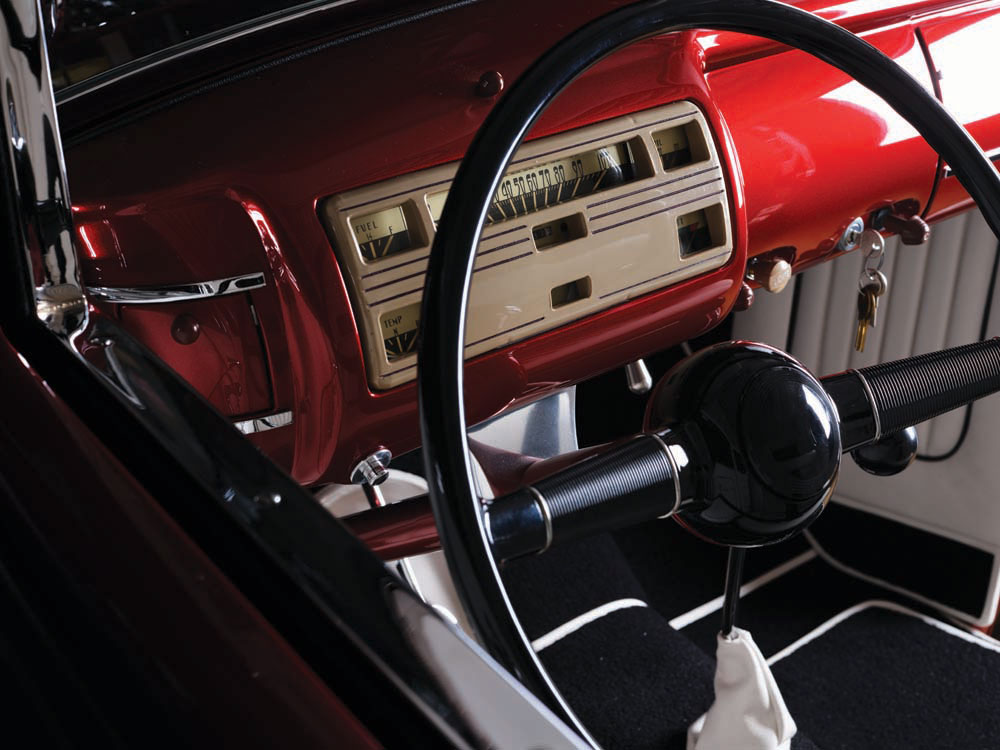 It starts up front. “Chuck’s a big 409 guy; he’s got a bubble top coupe and other Chevys with that engine,” Hilton explains. “Once I knew that was what he wanted, I sourced the original Weiand accessory finned valve covers (“say WHY-AND!”), the Weiand six-carb intake, and that Stromberg 94 carburetor. We wanted to use parts that would set it apart from any other 409. We found a vintage dual-point Mallory distributor. The four-into-one custom headers using 1936 Ford driveshaft cones. They’re straight pipes now, but Hilton plans to build a drop pipe on each side and fabricate a full custom exhaust system that runs under the car and exits under the tail panel.

The vintage 409 big block was massaged by Tony Lombardi and his talented crew at Ross Racing Engines. It’s a full race-spec engine with custom forged pistons, a Ross hydraulic roller cam, and that Weiand Stromberg sextette. Lombardi converted the Mallory ignition to MSD electronics. The big V8 idles with a meaty rumble that makes you certain it can deliver 500 bhp. It’s matched to a TREMEC T5 transmission that grabs power from a Centerforce clutch and pressure plate. An open driveline runs back to an early Ford 9-inch rear end that’s been smoothed and painted. Ford transverse leaf buggy springs are used front and rear. The dropped front axle was plated, as were the split wishbones, Dodge shock mounts, and nearly everything else in the suspension. The steering box is from a Ford F-100. The radius rods and trailing arms are 1936 Ford. 1940 Ford hydraulics with finned Buick drums up front are mated with chromed reversed 15-inch Ford steel wheels and whitewalls–evoking the early ’60s. 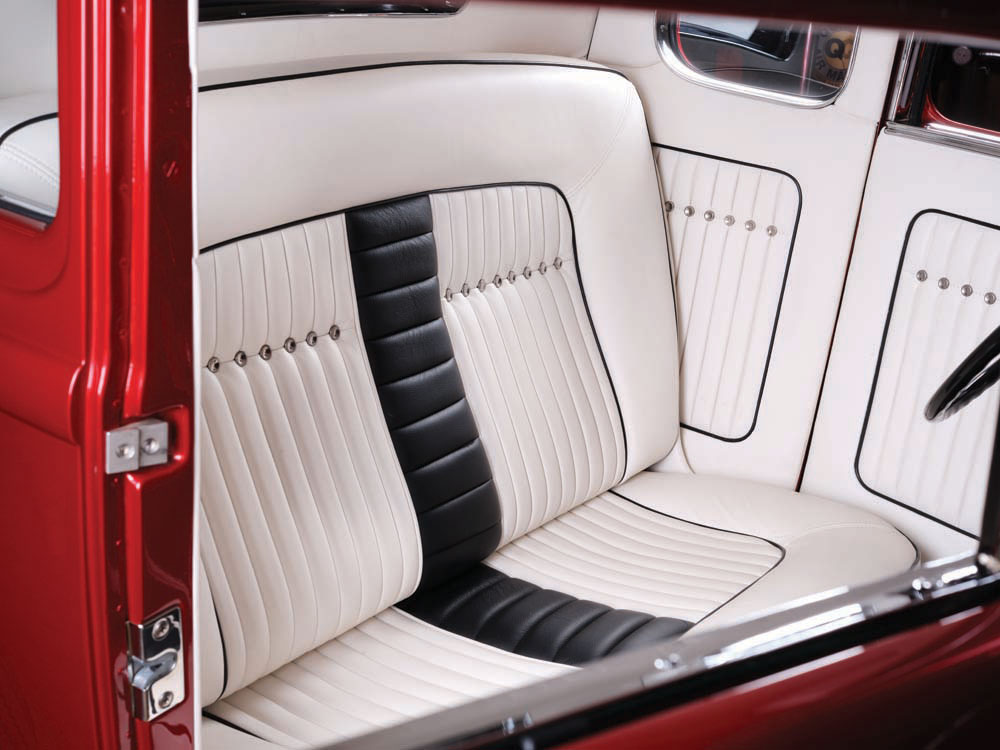 Donn Lowe’s 1932 Coupe was the inspiration, but this bad boy is all Hilton Hot Rods. This Deuce Coupe’s low silhouette results from a solid 3-inch chop all around. To get there, Hilton laid the posts back a little. “We released it at the base of the windshield, then slanted the posts without needing a filler panel in the roof.” More about that in a minute. 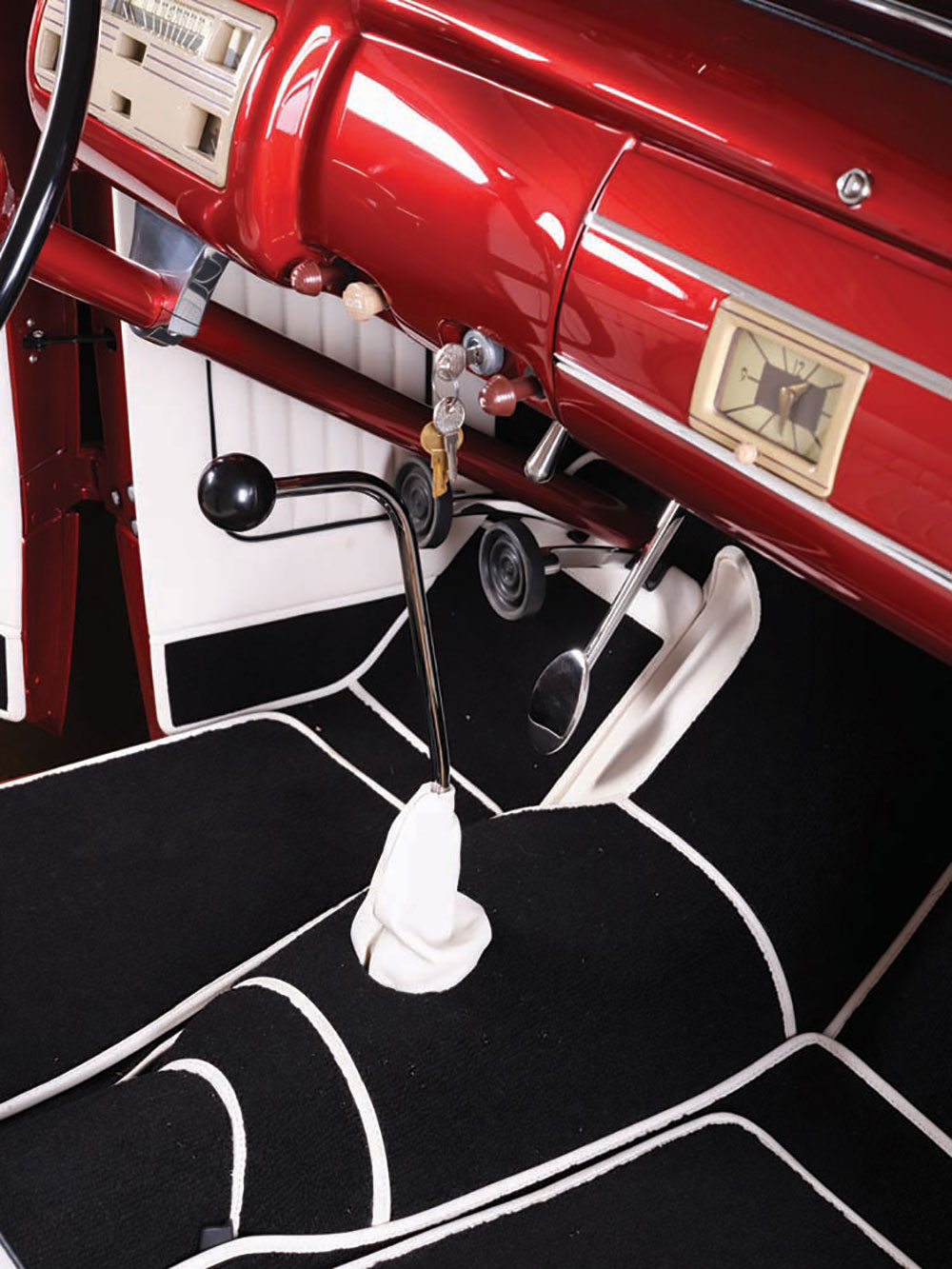 The combination of the mean-looking chop, slanted A-pillar, and dropped body makes this car very aggressive looking. Along the way, much of the original 1932 ford 5-Window Coupe highboy body was left on the cutting room floor. “For that finished body, we used a lot of new United Pacific Industries panels,” Hilton confesses. “It was an original body. But now there are new quarters, new floorpans, a new cowl top, both cowl sides, and the driprails. There was almost nothing left of it. But Chuck wanted to start with a real one. Bobby Walden made the door skins and we used a Walden roof insert.

“The 1940 Ford dash is an original piece that I found from a collector in Charlotte. To make it all fit, I sectioned the original dash panel in the middle because the 1932 body is narrower than 1940. I might put a radio grille in it, or a ‘Tommy the Greek’ pinstripe where the speaker was. To keep the tradition going, we left the ashtrays. Classic Instruments rebuilt all the gauges. They offered to give us an all-new 1940 insert panel, but Chuck wanted the original one restored. That’s a traditional look for this car. The newer panel makes it look like an autoMObile …” 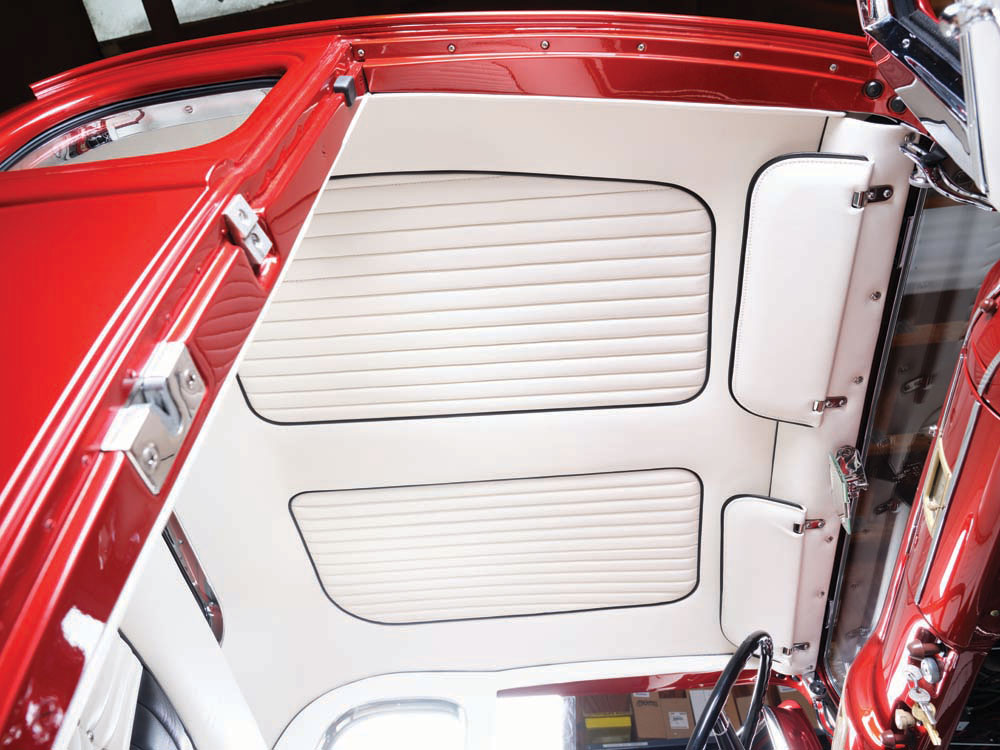 There aren’t many other body modifications. The original 1932 Ford gas tank was axed–the new fuel tank (from Tanks Inc.) lives in the trunk–and a pair of ’40s-era Chevy taillights were fitted on the lower panel. The cowl vent was retained. There’s no hood and no plans for one, either. The same is true for fenders. “Who needs ’em?” Hilton quips.

Inside, Mike Lippincott (Mikeyseats) crafted a period-correct white tuck ’n’ roll interior, including the headliner, that’s accented in places with discrete plated buttons. The fuel tank is also wrapped in white tuck ’n’ roll and the lush carpeting is a black cut pile with white edging. It looks like something Gaylord of Hollywood might have done for George Barris. The workmanship is sublime. An Art Deco 1940 Ford steering wheel in black complements the threads. 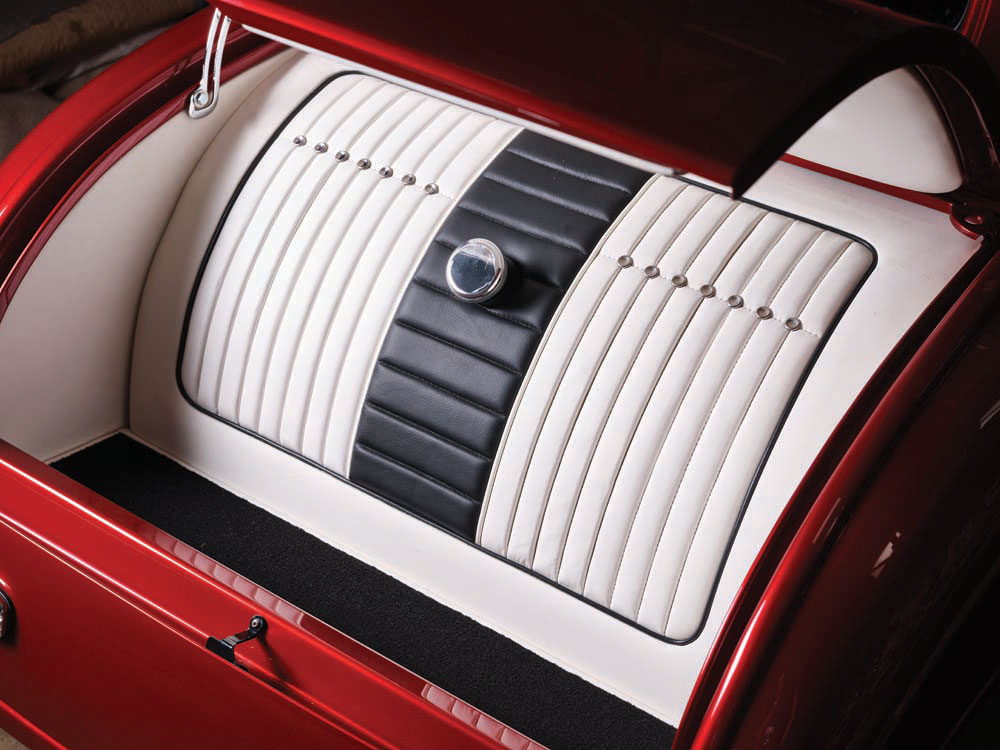 When this was written, Chuck Wray hadn’t yet driven his new car but Bobby Hilton hasn’t wasted a moment. “I’ve been driving the wheels off it. It drives heavy. It feels solid on the road. The F-100 truck steering box is perfect. With a pancaked 1940 cross member in the back and a stock 1940 Ford leaf spring, it rides nice—and it’s really fast.” 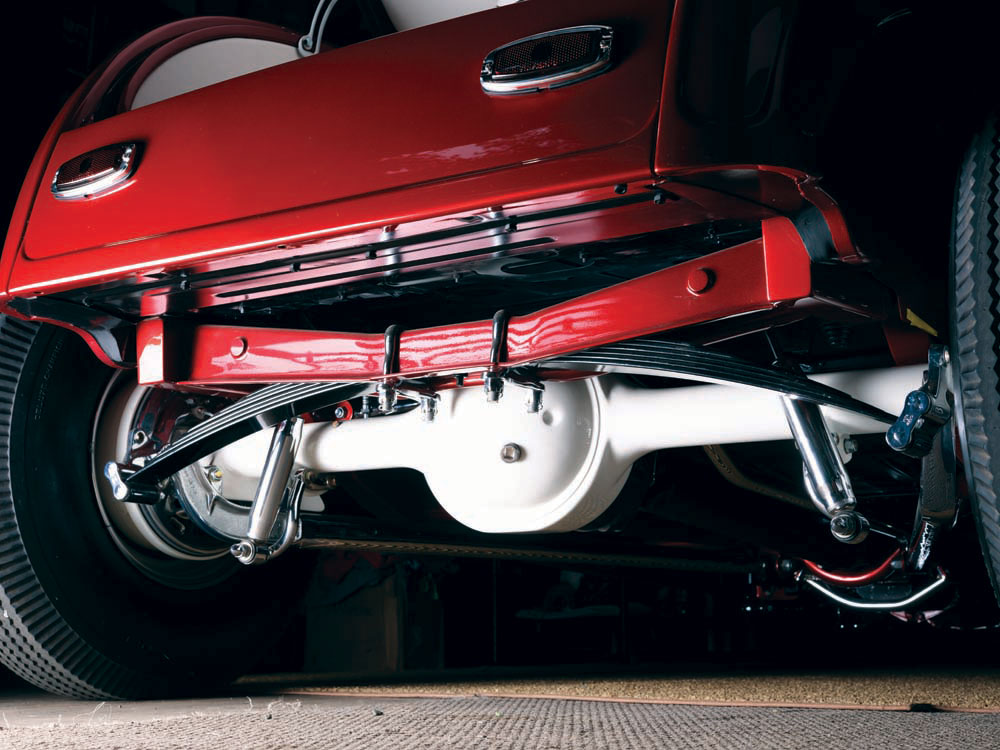 Chuck Wray is delighted, and he’s looking forward to driving his new hot rod. “In the big scheme of things,” Chuck says, “I am very grateful that I’ve accomplished a goal that I set out to do 51 years ago. I thank [Hilton], and I’m grateful to have made new friends in the hot rod community.” And there are future plans. “I’m already dreaming about the next hot rod to build, a more usable car like a 1933-1934 coupe that’s very old school with Olds or Caddy power. But I have to finish paying for this hot rod before I start worrying about the next one.” MR