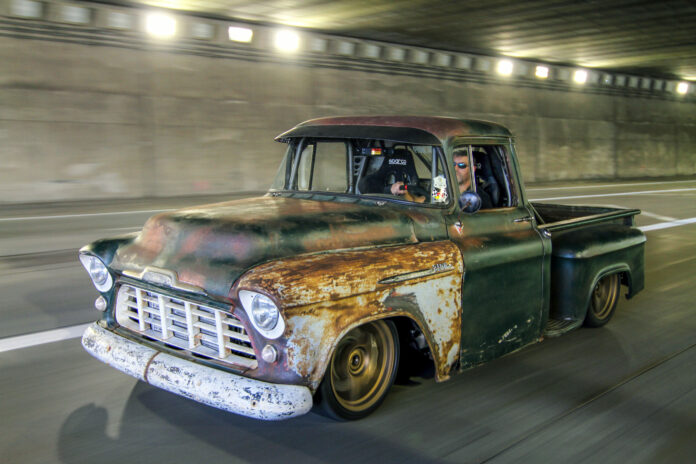 Steve Metcalf wanted a 1955-57 Chevy pickup ever since he was a teenager in Australia. Finding one became a lot easier when, in 2014, his engineering job for General Motors moved him from Down Under, where he’d worked for Holden, to the Motor City and GM’s proving ground outside of Detroit. 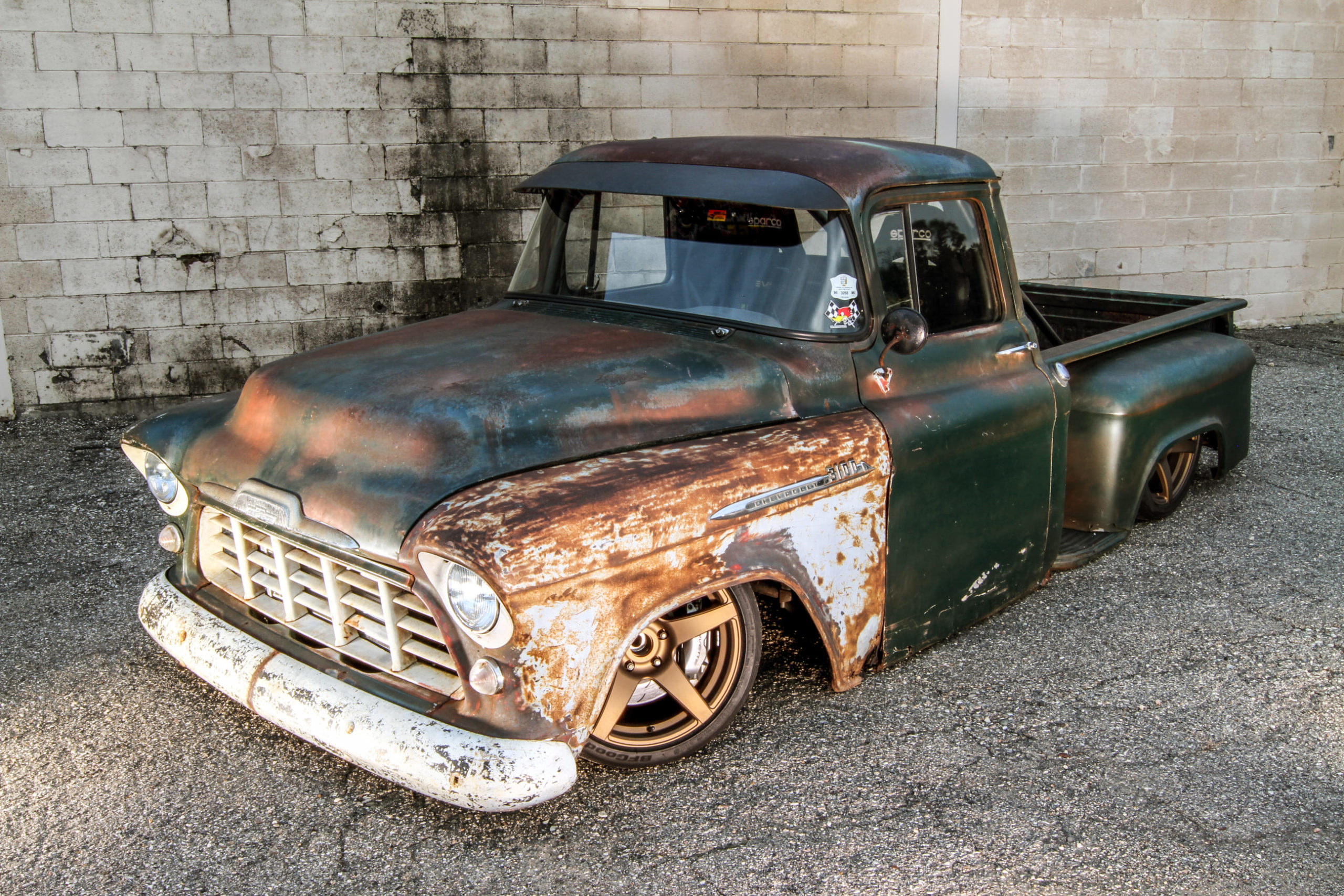 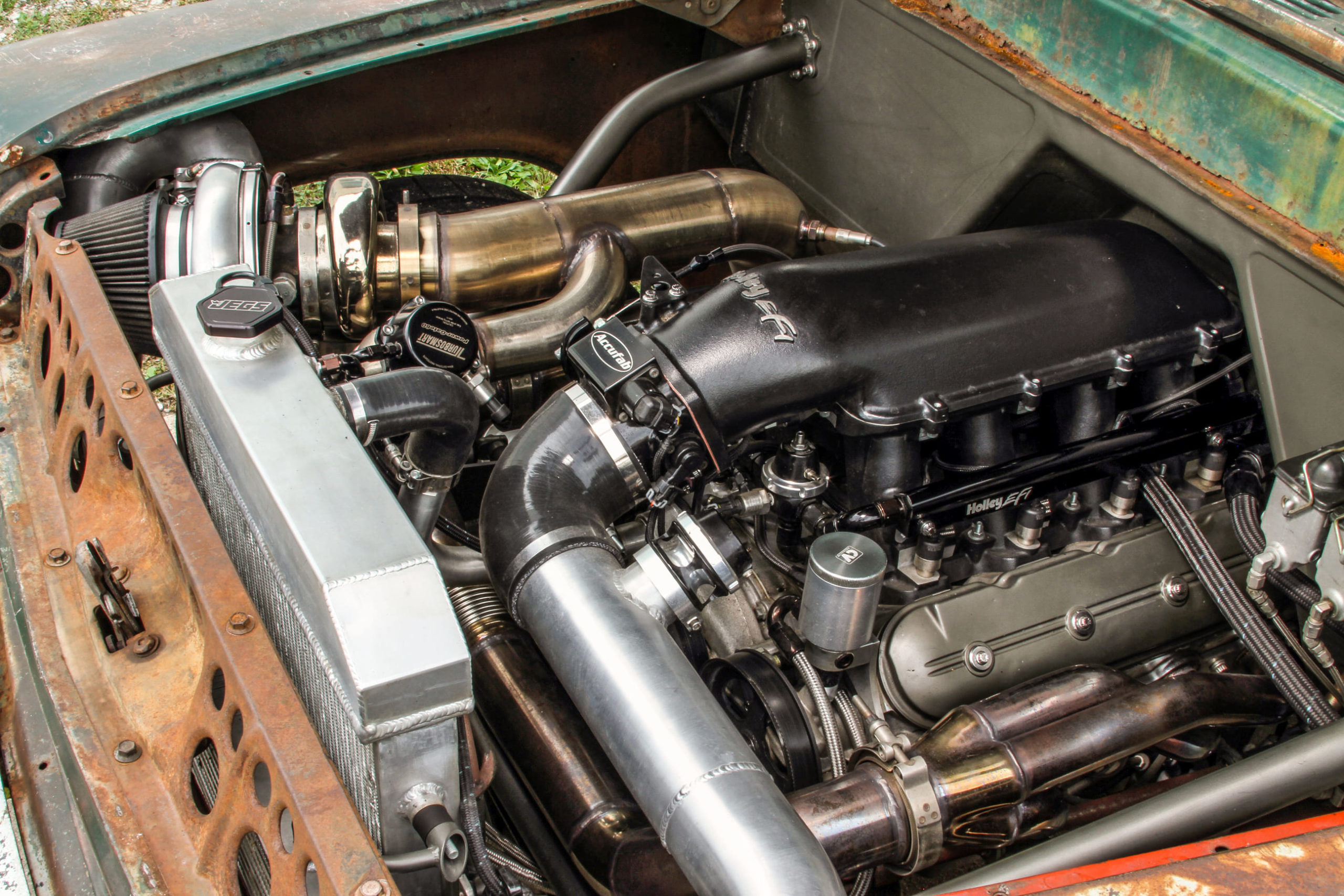 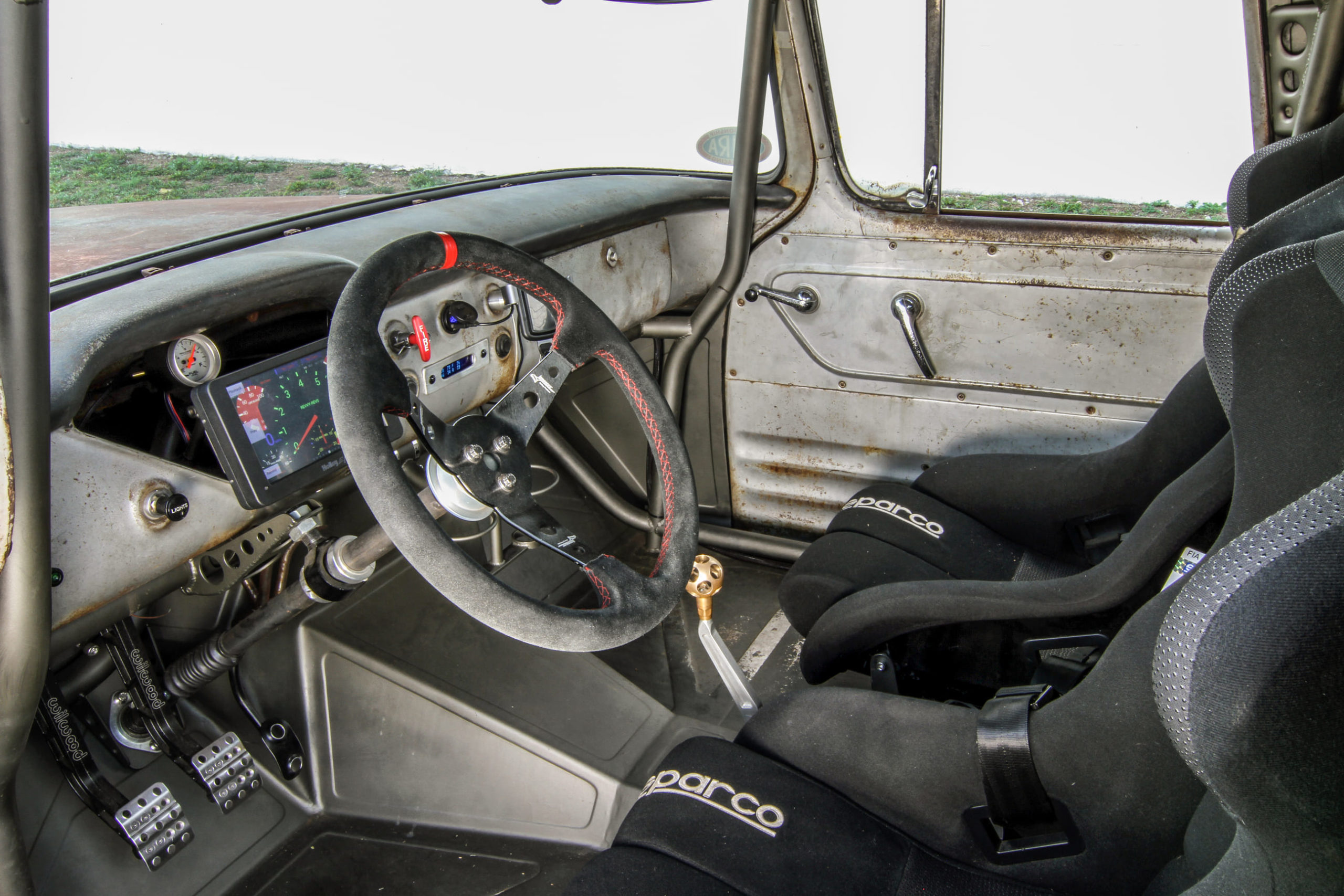 “I’d been following American car culture for years,” he says. “When I moved here, I couldn’t wait to dive in.”

It was about a year after arriving Stateside that Steve found a ’56 step-side on craigslist and purchased it immediately.

“It was pretty much original, but missing the gearbox,” he says. “After I got it home, I eventually dropped in a mild 355 small block, a Powerglide and a 10-bolt Posi, but left the original suspension as it was. After the first drive, however, the suspension was shot.”

Initial thoughts of making a budget Gasser-type hot rod evolved into expanding the truck’s all-around performance capability, especially when it came to handling; and the project was relaunched at the start of 2017, with Steve dismantling the truck at home, in his suburban two-car garage. Over the next 18 months — and with some spiritual guidance from GM colleague and pro touring pioneer Mark Stielow — the chassis and drivetrain were recast with 21st century performance elements. 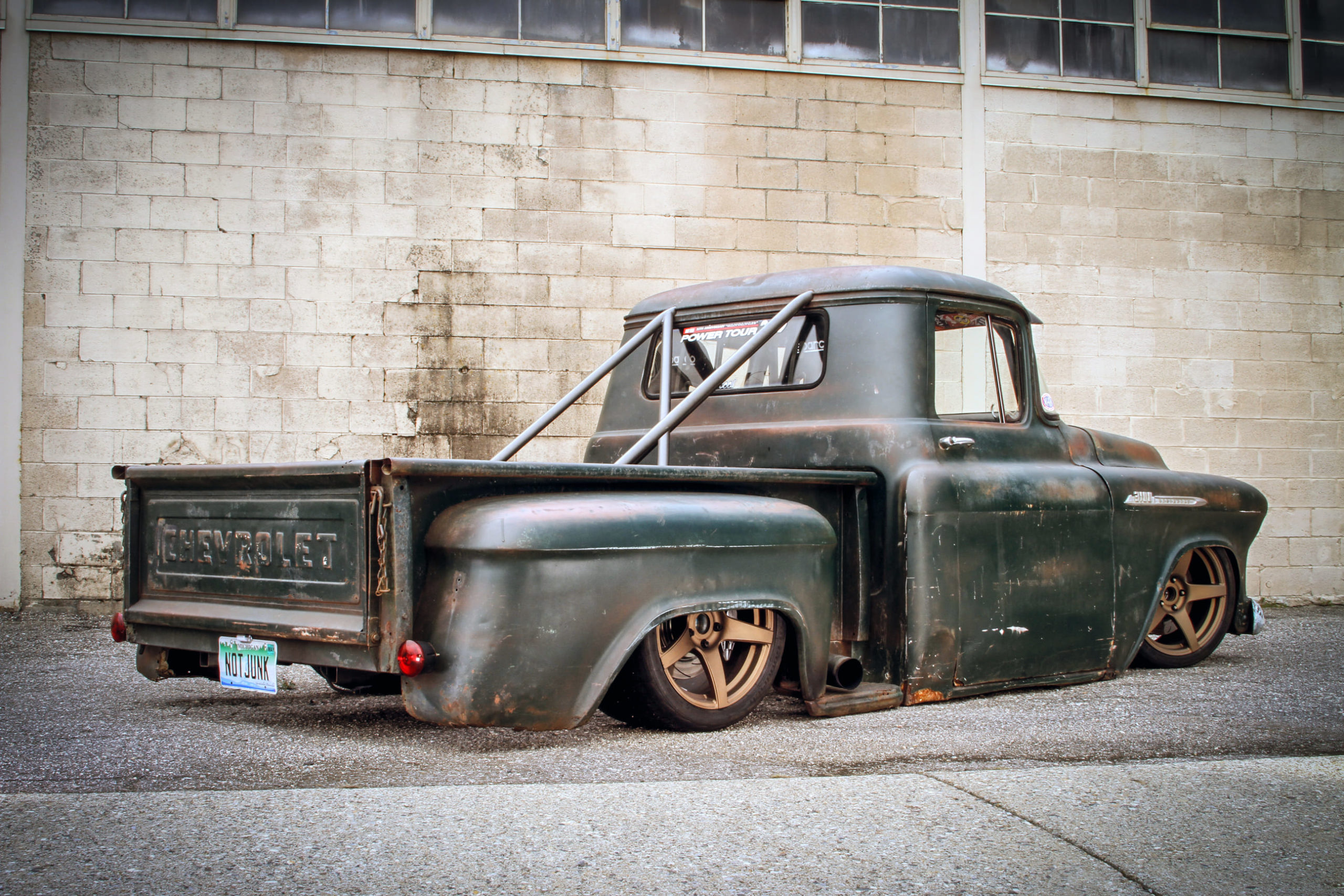 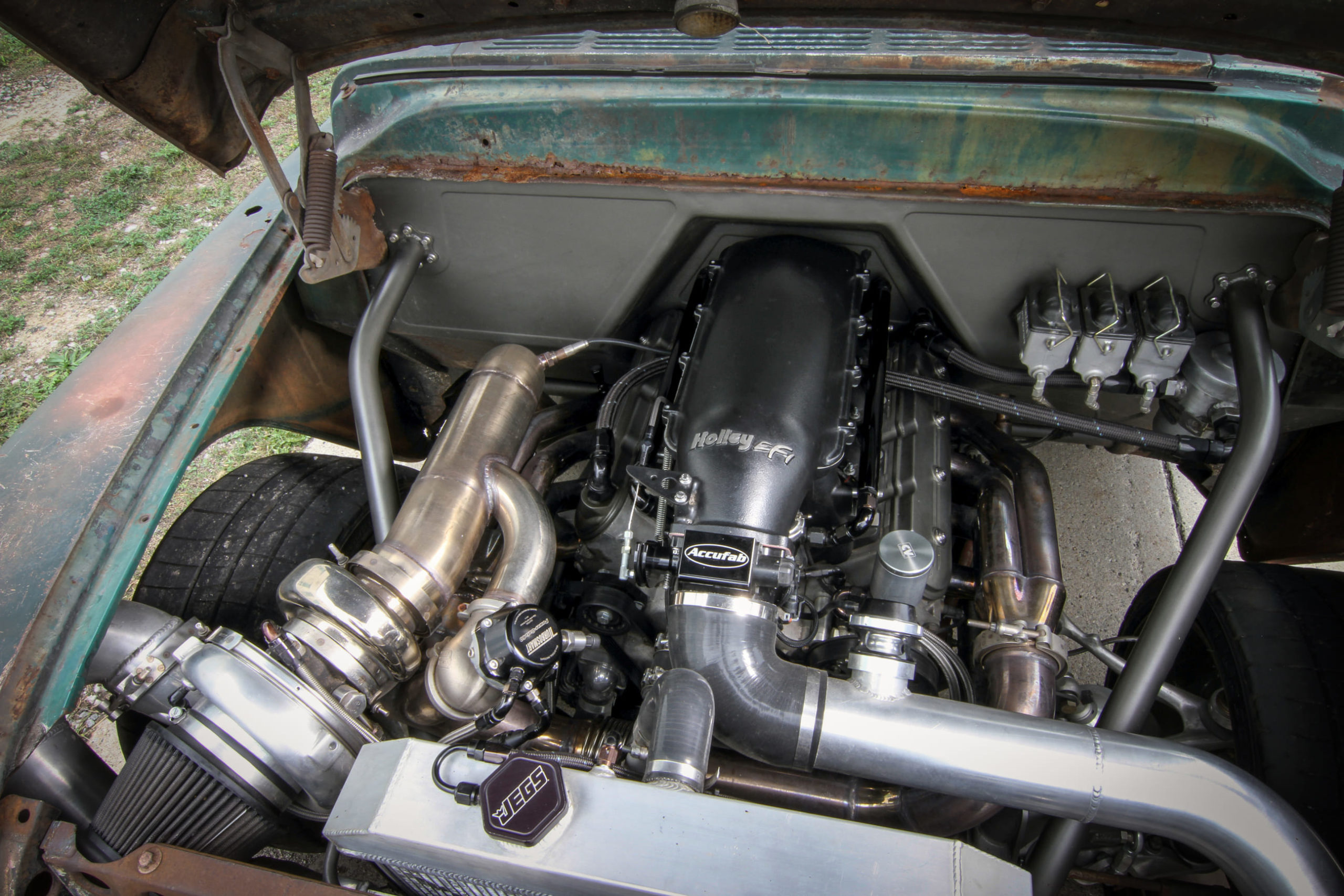 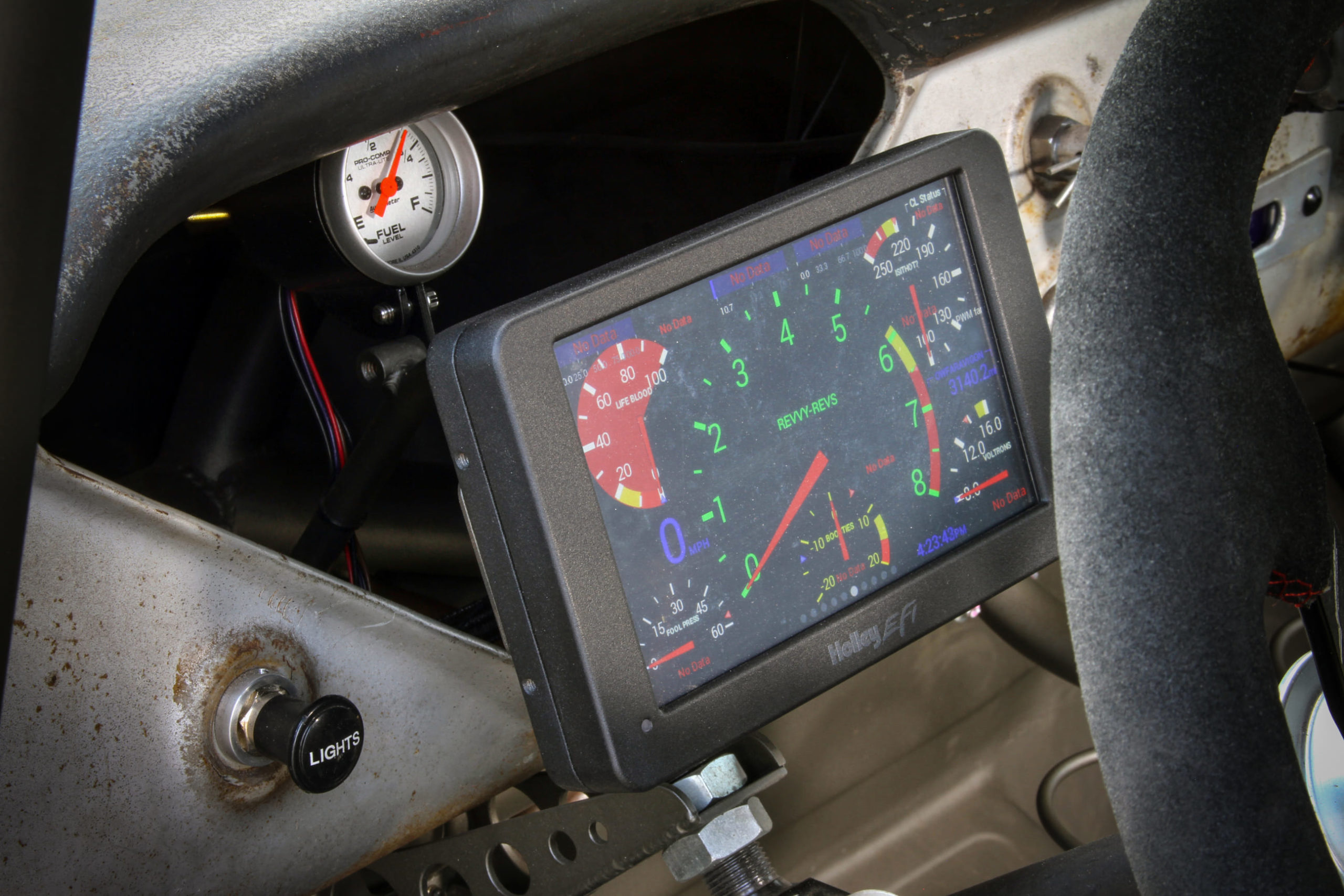 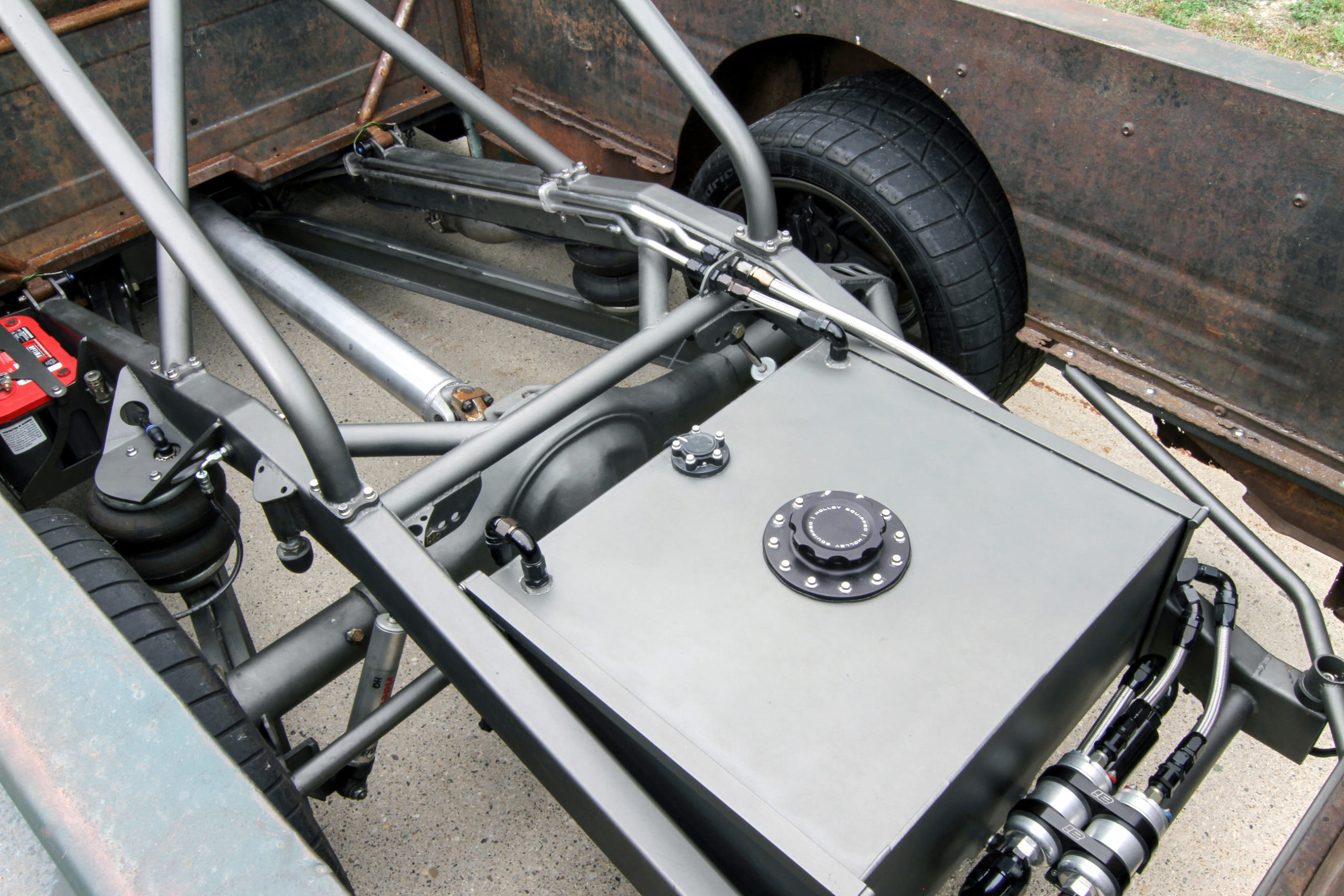 “Pro touring was the primary influence on it,” says Steve. “But I wanted to expand that a bit. I wanted it to be slammed, but still capable of compromise-free street driving. To be honest, there are influences of just about all motorsports in it, from drag racing to drifting, autocross, NASCAR and more. I just wanted the truck to do it all.”

The old-school small block wasn’t going to cut it any longer, either, as Steve eyed the performance capability enabled by a force-fed LS engine. The truck was going to get a thoroughly modern makeover under the skin, while retaining the sweaty, work-worn aesthetic of its six-decade-old bodywork.

The Chevy would need a new chassis to support the sort of performance he was aiming for, so Steve built one himself at home. It’s a firm foundation, rooted in 2×4-inch rails with 0.120-inch walls; with all of the joints gusseted and completely TIG-welded. It’s patterned on the general layout of the original frame, but narrowed 5 inches to allow the wheels to clear the front fenders at full steering lock. 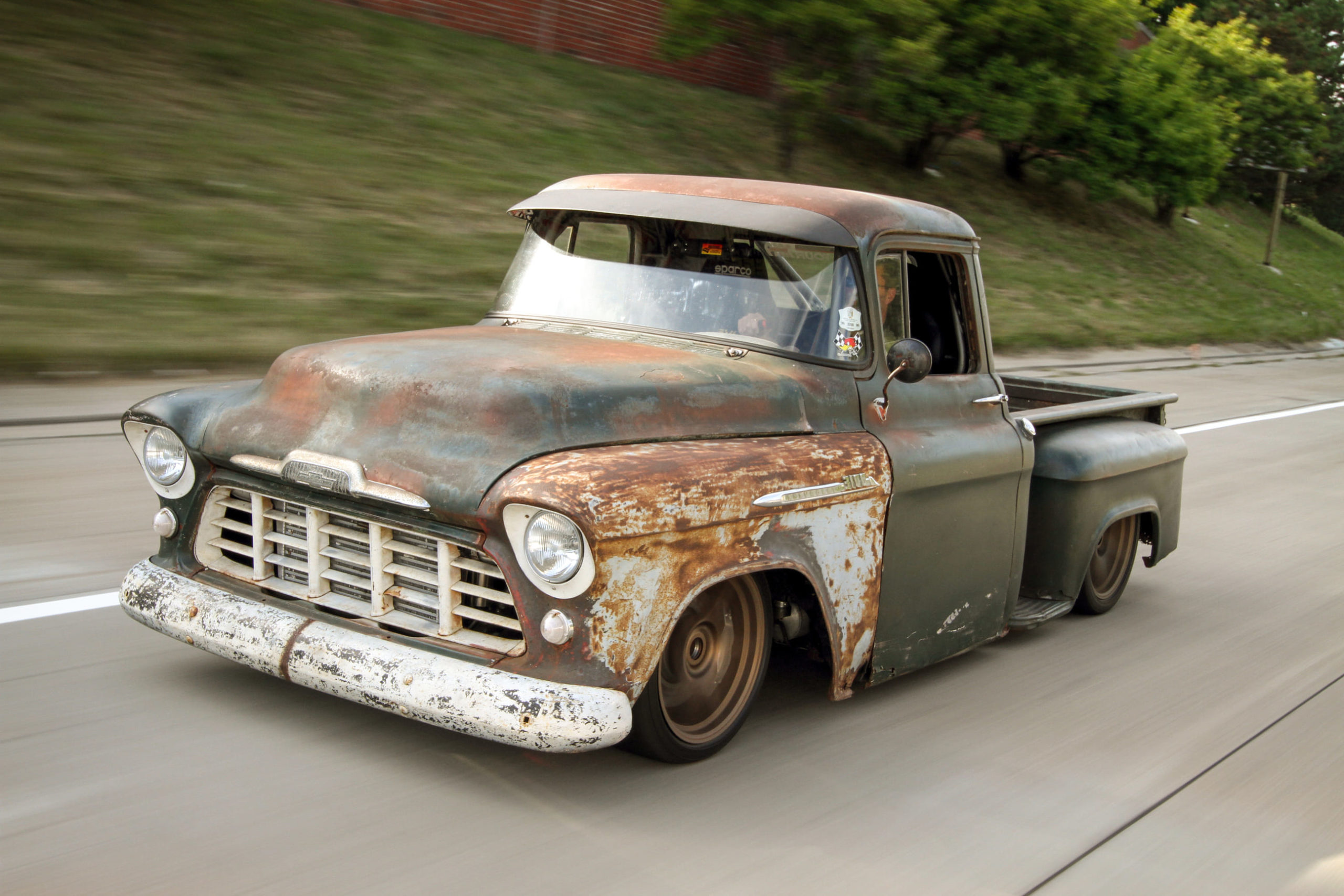 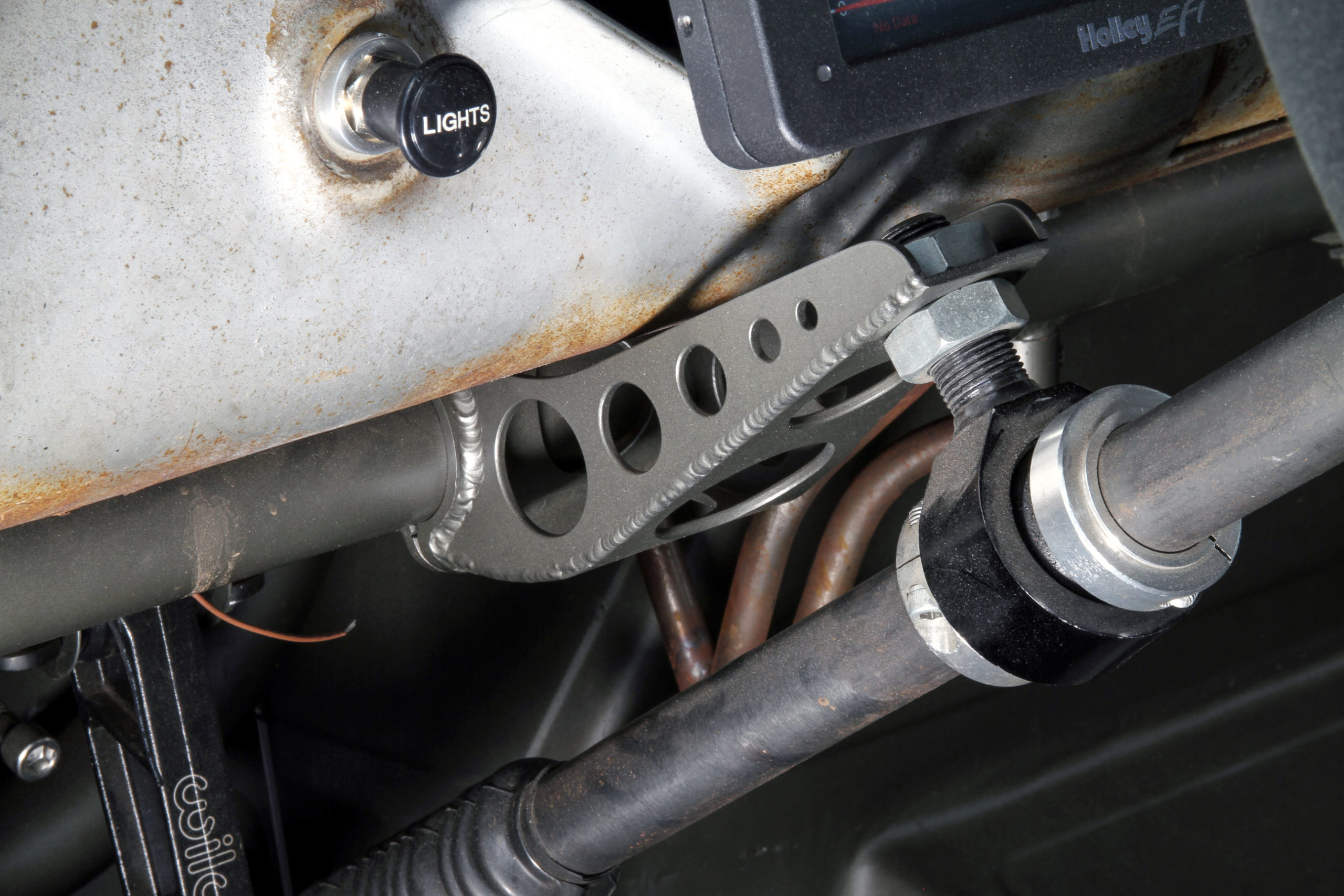 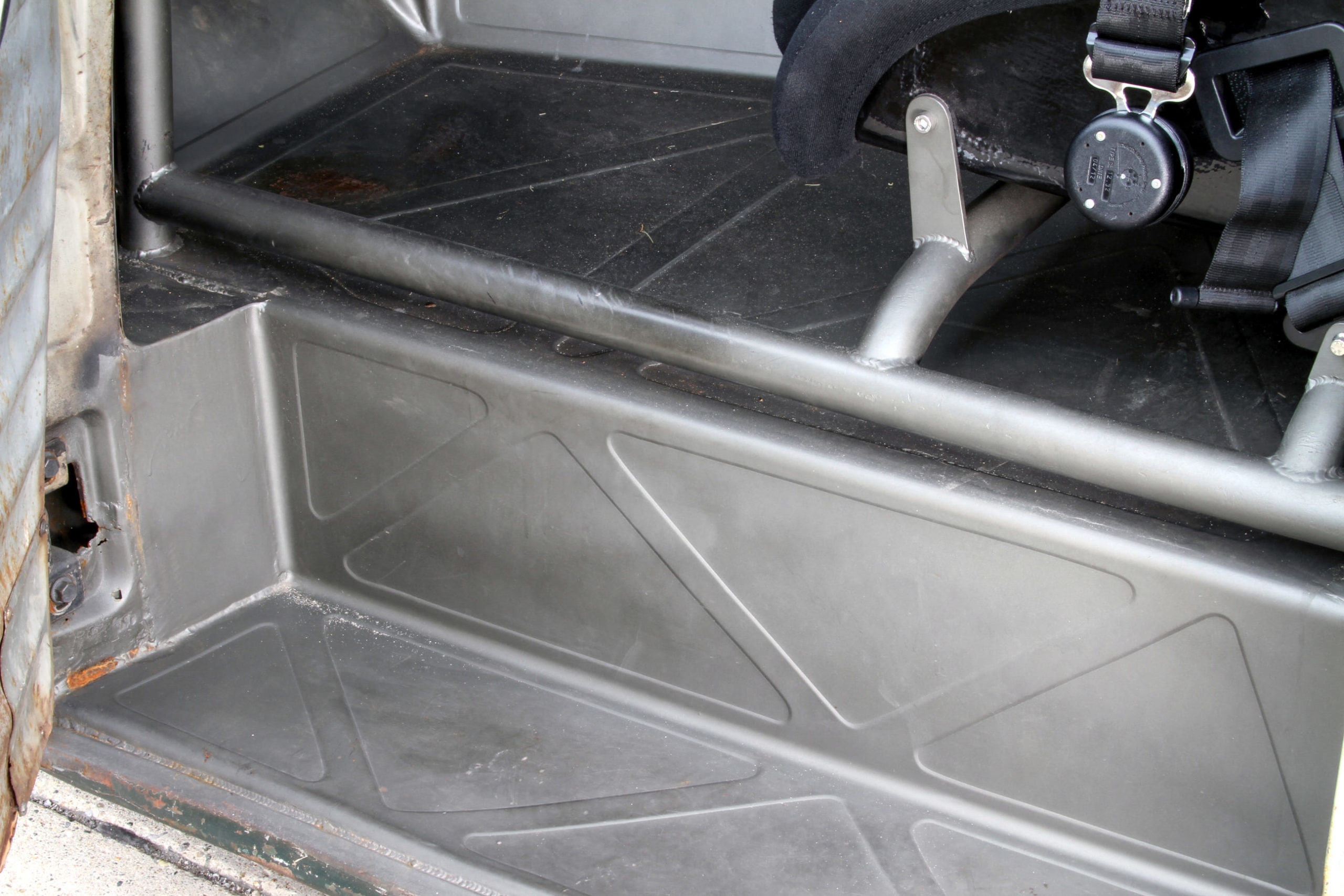 To provide further chassis reinforcement and driver protection, a 12-point roll cage was fabricated into the cab and it incorporated the mounts that attached the cab to the chassis. The front and rear sections were designed to interlock, to allow easier cab removal.

“I didn’t have a frame table or anything like that,” says Steve. “It was all done with lots and lots of careful measuring.”

Additional home fabrication included a racing-inspired sheet metal reskin of the interior, with great-looking beadroll work that was performed with a homemade beadroller, as well as a custom pedal box for three Wilwood master cylinders (one each for the front and rear brakes and another for the clutch).

More custom fabrication was employed to hide a four-gallon air tank, a couple of compressors, a wiring harness, solenoids and more under the cab. There’s also an 18-gallon fuel cell wedged between the rear frame rails.

When it came to upgrading the suspension, Steve went with a custom-mounted C5 Corvette system in the front (with a beefy 1.25-inch-diameter Sprint car stabilizer bar) and a genuine NASCAR-type two-link design, locating a 9-inch axle, with TIG-welded 4130 chrome moly truck arms featuring spherical ball joints. There are Ridetech air bags and shocks at all four corners, too, which provide the desired slammed look while cruising or at a show, but enable easy and comfortable highway driving. 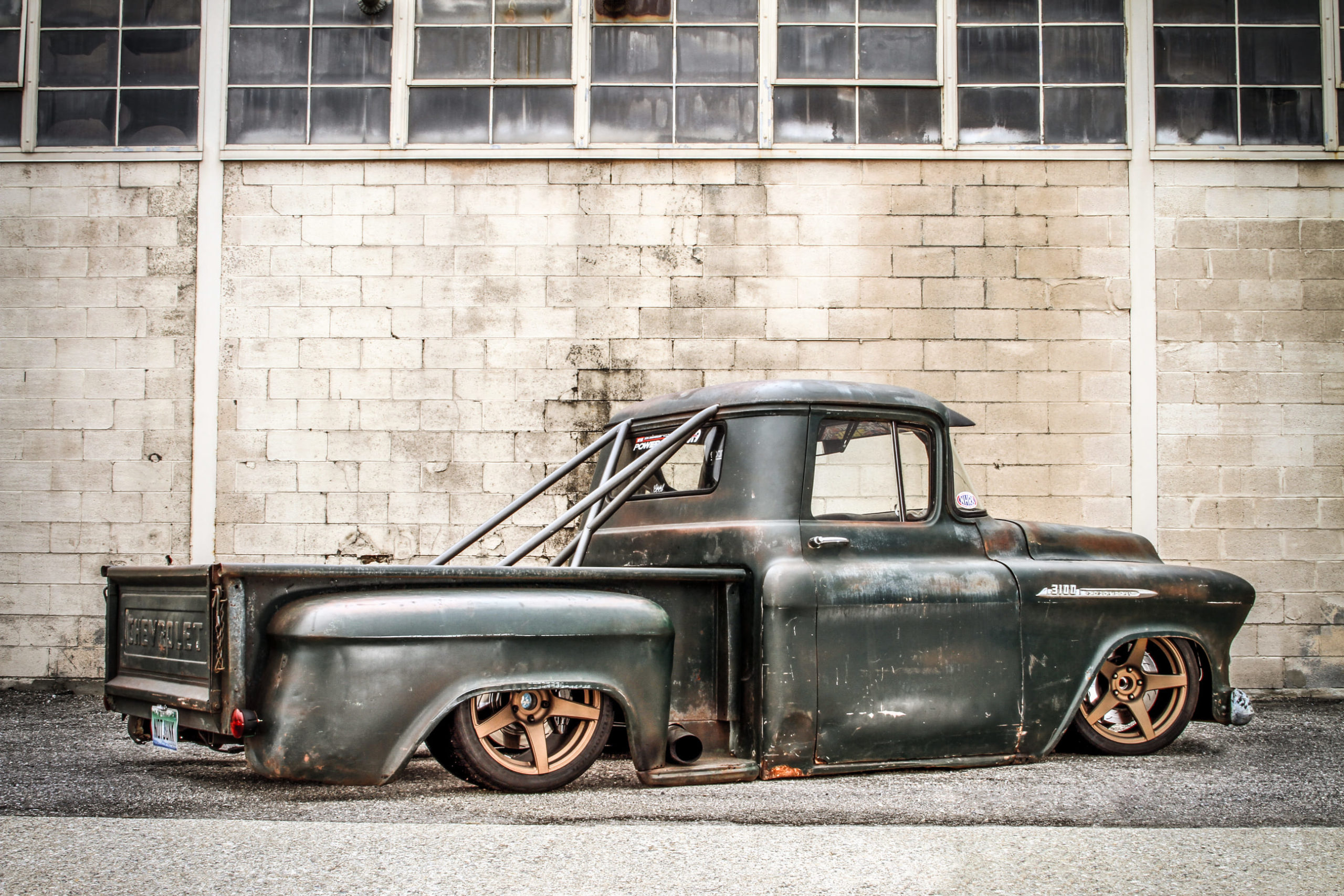 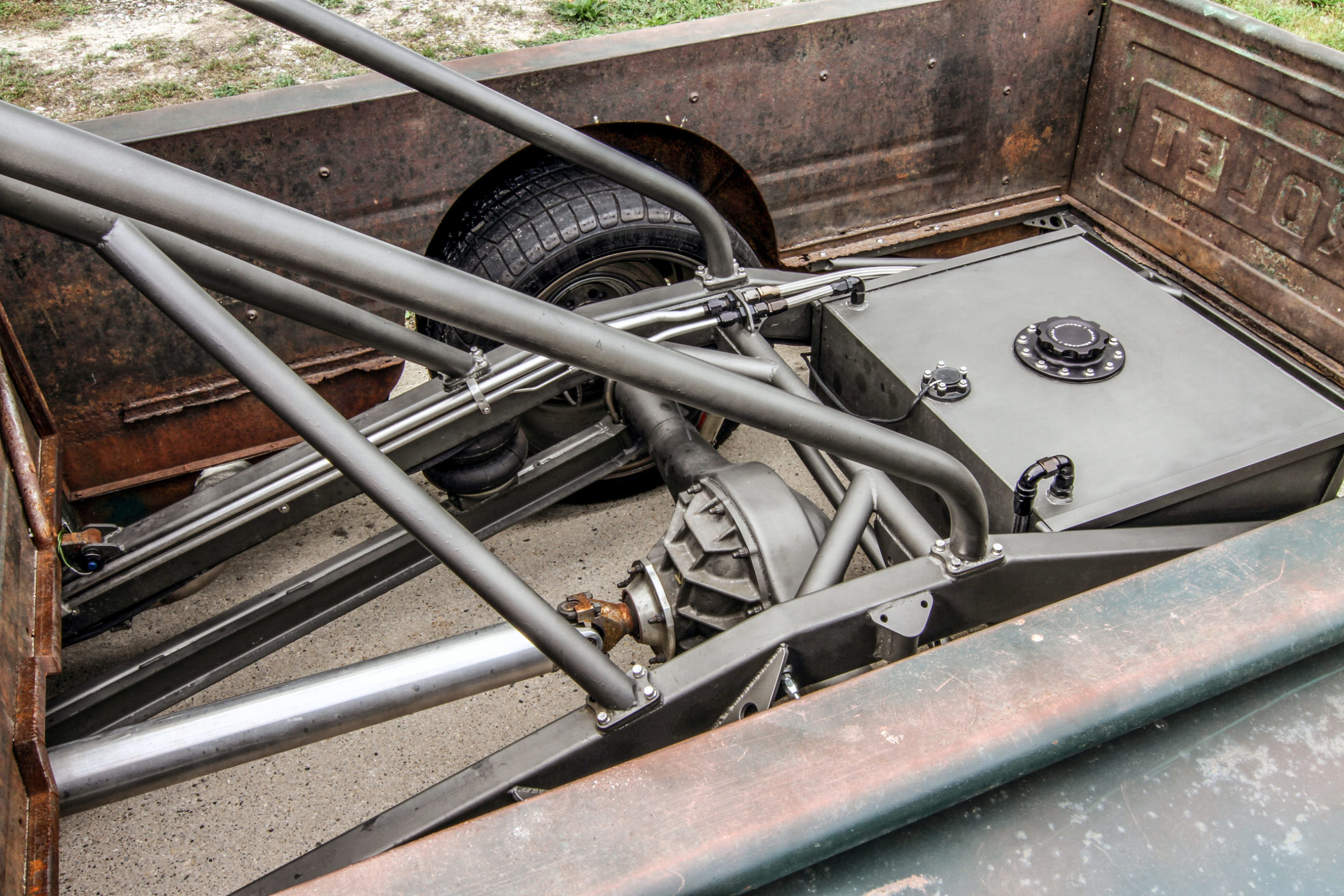 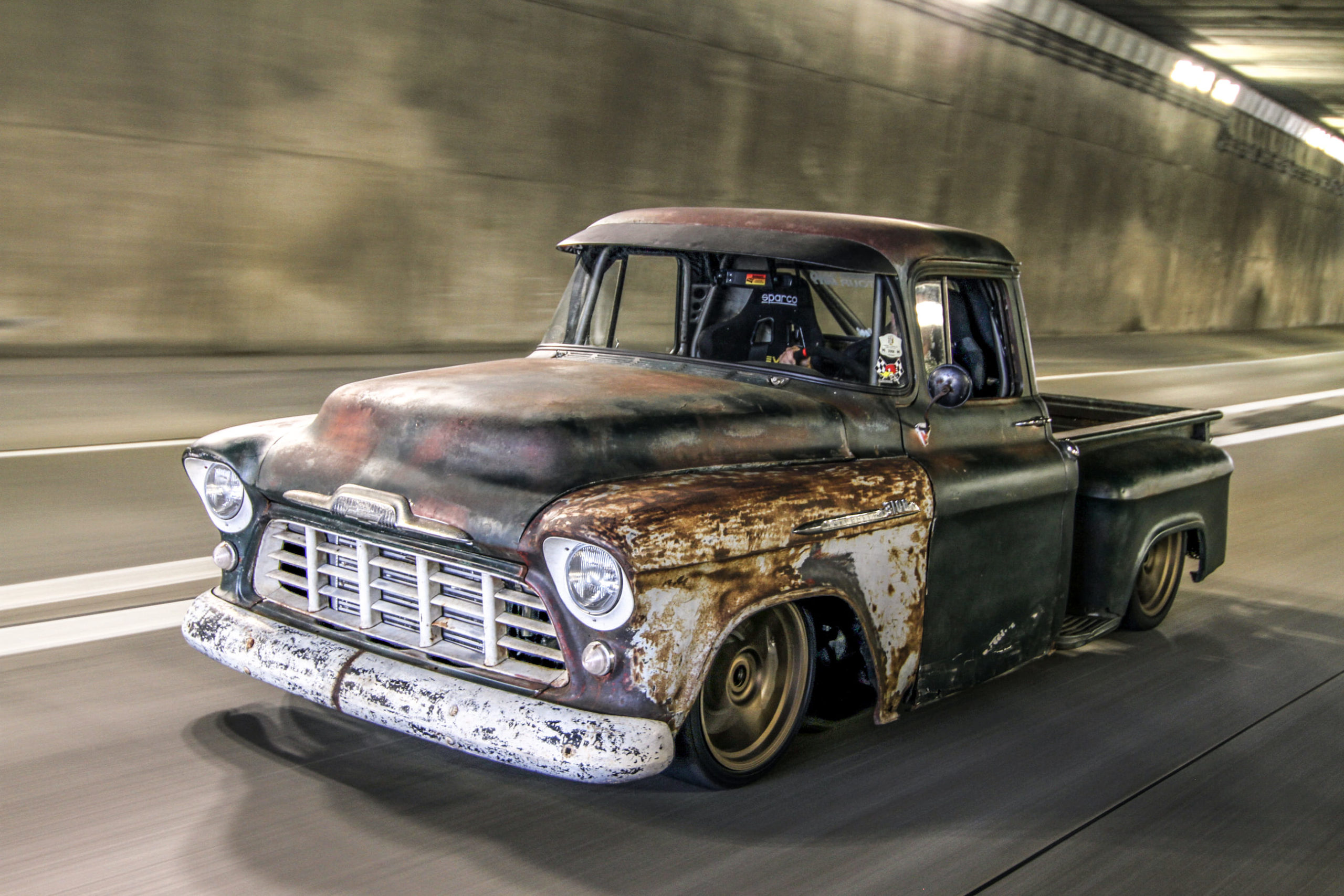 “It may some counterintuitive to have an air suspension on a truck intended to run autocross tracks and drag strips, but it works surprisingly well,” says Steve. “To be clear, I didn’t build this truck to be a class champion in any particular form of motorsports, but to be competitive and have fun trying the different types. To that end, it all works very well.”

Rounding out the chassis and suspension features are C7 Corvette-based Brembo brakes, with four-piston calipers and slotted rotors. The Chevy rolls on 18-inch Forgestar CF5 deep-dish wheels (with a bronze finish to complement the Chevy’s rust), measuring 10 inches wide in front and 12 inches wide in the rear. The tires are BFG Rivals: 275/35ZR18 and 335/30ZR18, respectively.

Replacing the 355 small-block under the hood is an internally stock LS6 from a wrecked 2004 Corvette Z06 racecar, which has been pumped up with 8 pounds of boost driven by a single, custom-fabricated turbo system.

“It’s a relatively mild setup these days, but one that gets the job done very well,” says Steve. “Overall, it was reasonably economical to build; and because of the comparatively high 10.5:1 compression ratio, I didn’t want to go too crazy with the boost. I’ll run it until it blows up and then I’ll rebuild to take a lot more boost.”

Engine management is the responsibility of a Holley EFI system, which is complemented with a Holley 7-inch touchscreen in place of the original instrument cluster. It also controls a pair of Bosch fuel pumps, with one running full-time and the other kicking in once the boost hits 5 pounds.

With only the base tune from the controller, the truck makes more than 500 horsepower at the rear wheels. Steve believes there’s another 50-100 horsepower to be had with a finer edge on the calibration, for now, the truck runs great and pulls hard.

A Dodge Viper T56 six-speed manual transmission backs the pressurized LS6 and it is controlled with a short-throw shifter, custom billet extension (to fit the truck’s driving position) and a bronze-tone shift knob that was machined in Steve’s father’s garage, in Tasmania, Australia, halfway around the world. There’s also a McLeod RXT twin-disc clutch, an aluminum 3.5-inch driveshaft that came out of Mark Stielow’s “Jackass” ’69 Camaro and a 9-inch axle filled with a Strange center section featuring an Eaton limited-slip diff, 3.50 gears and Currlie 31-spline axles.

We’re loathe to mention the word patina these days, because it’s been as overused as the phrase “meet the deadline” on every cable-TV car show, but there are few other accurate terms to describe this Chevy’s unrestored exterior. It was a strategic decision on Steve’s part to leave the truck’s exterior as-is, based partly in a look he admired and perhaps more in a build budget that was focused more on performance than shiny paint. 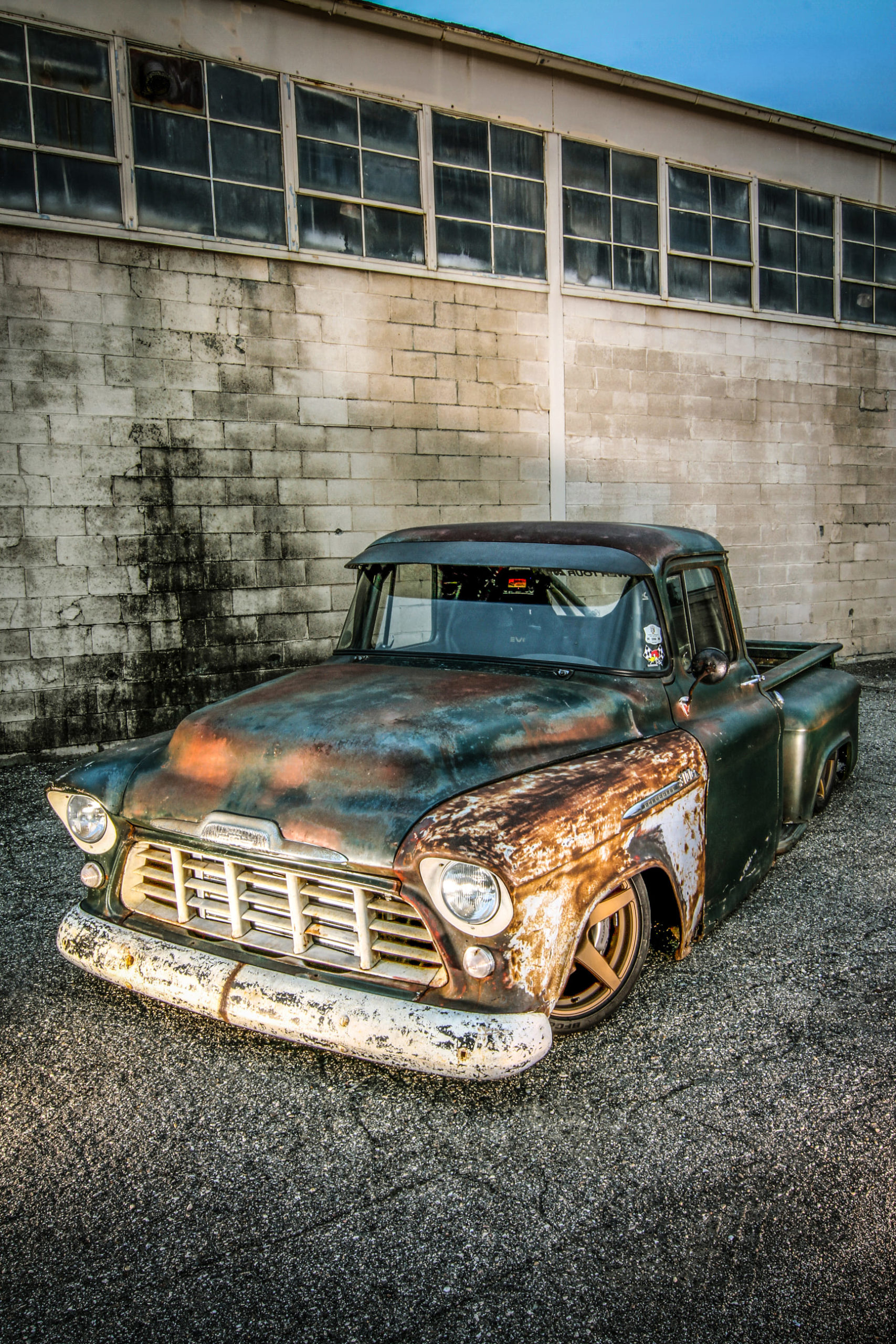 The paintwork — or, more accurately, what’s left of it — is original, as far as Steve could tell when disassembling the truck. There’s rust and some filler in areas that has been left in place, while a replacement left-front fender was added, when filler more than an inch deep fell off of it. The front bumper was also shortened 2.5 inches, to tuck it in closer to the body.

Steve shored up all the non-visible sheet metal with discreet gussets that add reinforcing structure to the body. Also, the cargo box now has ball lock pins that enables it to be quickly and easily removed for chassis access and changing tires; and because he’s not a fan of the raised floor look of slammed trucks, Steve simply didn’t install a bed floor.

It’s an undeniably purposeful look that’s matched inside with the custom tin work and a decidedly lack of amenities and creature comforts. There’s no carpet or sound deadening; and rather than a custom array of gauges, that Holley display screen simply sits in the dashboard hole where the original instrument cluster resided.

At a glance, the Spartan appearance looks simplistic, but the closer you look, the more the attention to detail in the fabrication reveals itself. The homemade roll cage, for example, carefully hugs the interior’s corners and incorporates mounts for the pair of Sparco racing seats, while most of the body’s reinforcing gussets have lightening holes that speak to the vehicle’s racing inspiration — and Steve’s fabrication skills.

“It was designed first and foremost to deliver on the performance requirements for the truck, but I also wanted the visible engineering details to look good,” he says. “Once you get past the time-worn body, there’s a lot more to see.”

When the Chevy was finished, a few cruises up Woodward Avenue, drives to work at the GM proving ground and even an autocross helped break it in and work out the bugs. Well, most of the bugs. 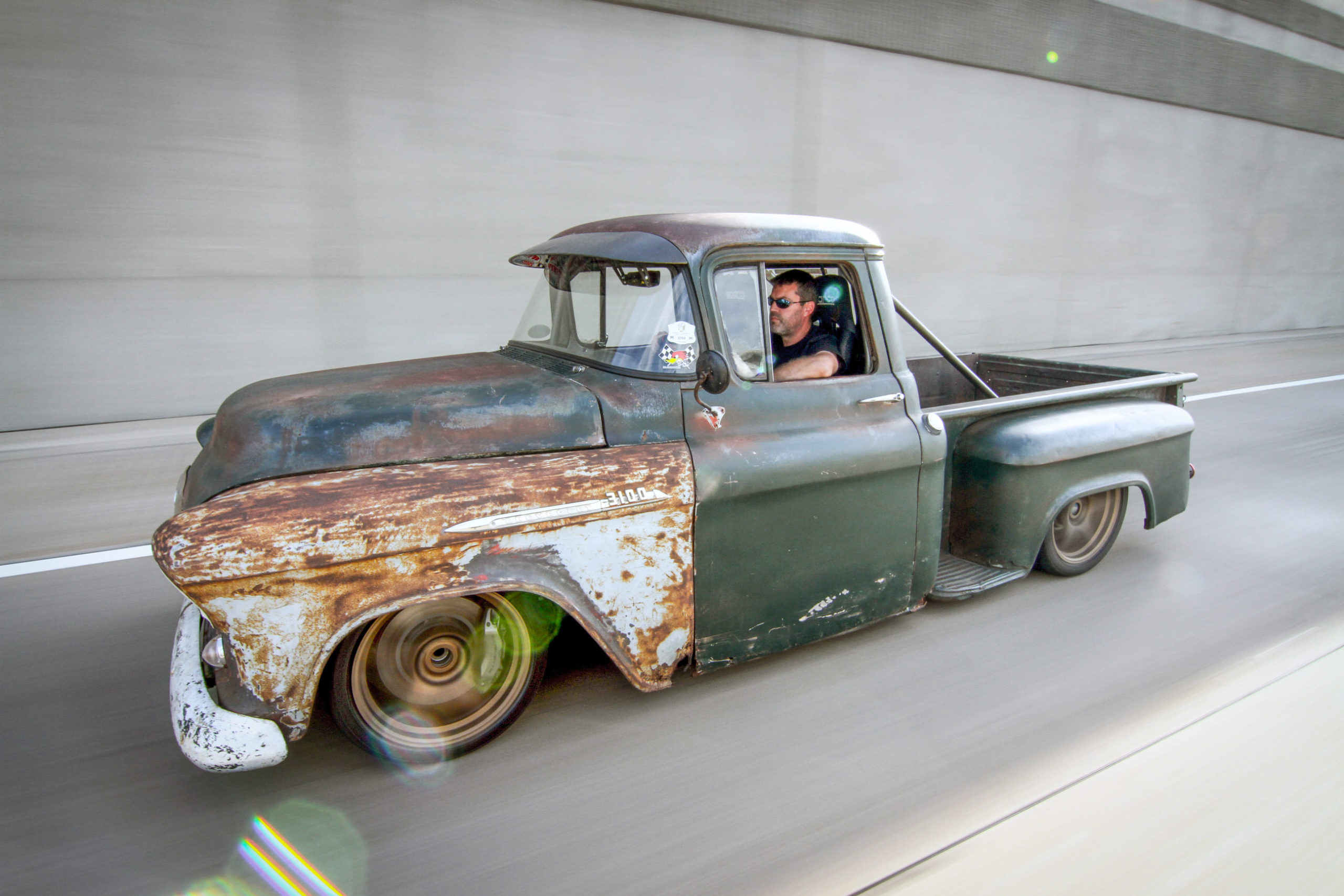 “It only had 600 miles on it when my mate Bundy from Australia visited,” says Steve. “We packed up and headed to North Carolina to participate in the 2019 Hot Rod Power Tour — a 2,200-mile round trip. Sure, there were a few teething issues, but we made the whole trip and the truck ran great.”

It was a drive that included three days and three nights of driving in the rain, with no wipers and no heat. It was adventure, for sure, but one he and his friend wouldn’t trade for anything.”

“There’s a deep-rooted and enthusiastic car culture in Australia, but it’s something else in America,” he says. “Bundy couldn’t believe just how many highly modified classic cars and trucks are on the road in the States; and how the Power Tour was something that basically couldn’t happen in Australia, because of a number of regulations.”

Steve continues to refine the truck’s performance and drivability, making it a better driver on the road and a stronger competitor on the track.

“Something like this with an air suspension isn’t supposed to work on the track,” he says. “It may not win the next OPTIMA Challenge, but it’s a competitive vehicle and a blast to drive.”

Fair dinkum, as they say in Australia. And whether it’s there or America, the drive to build your own classic vehicle is the same; and Steve Metcalf is one of the fortunate few enthusiasts who’s been able to express his passion in both countries. 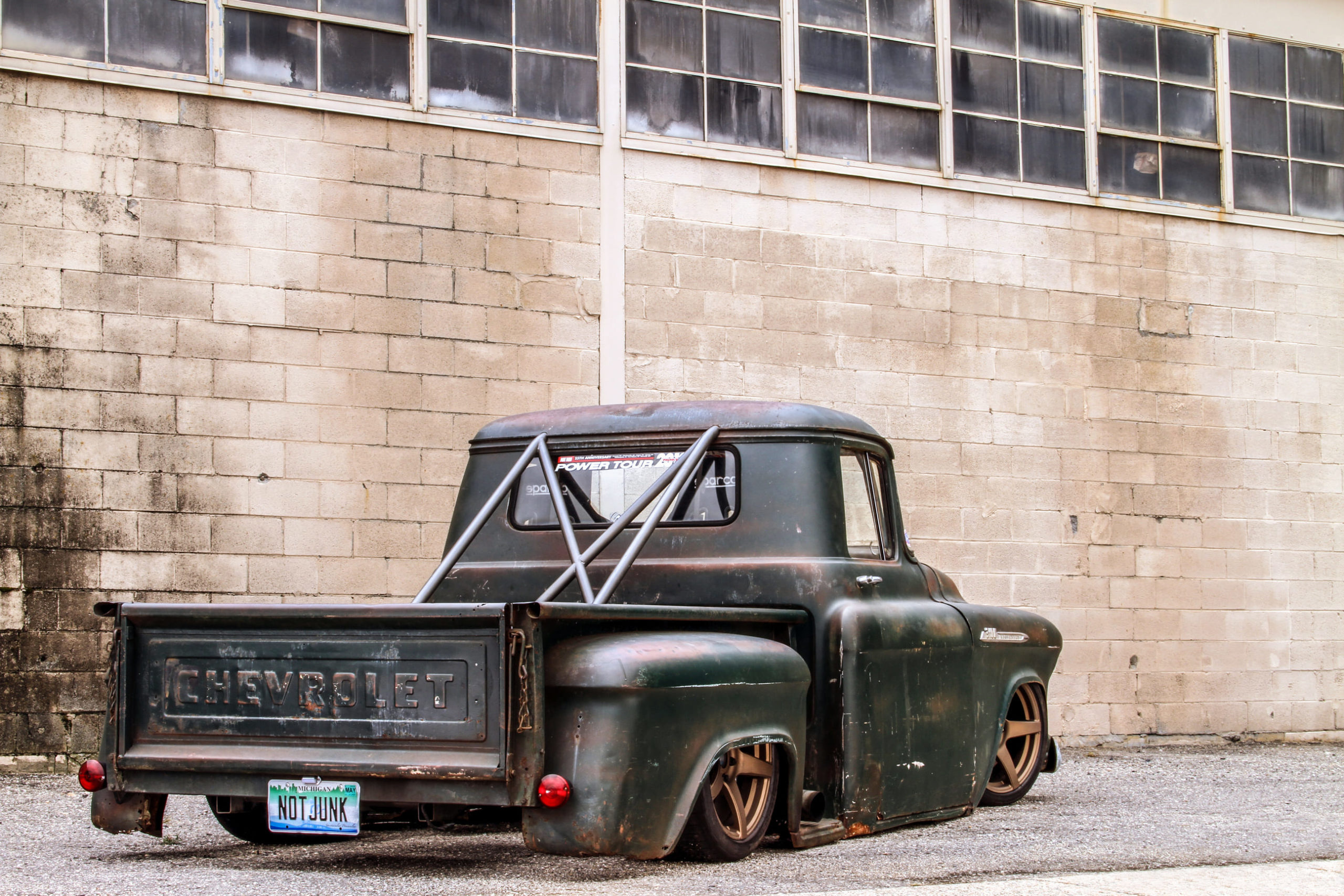 We’ll hold off on the other Australian puns and clichés to simply give a thumb’s up to a Down Under craftsman. G’day mates.