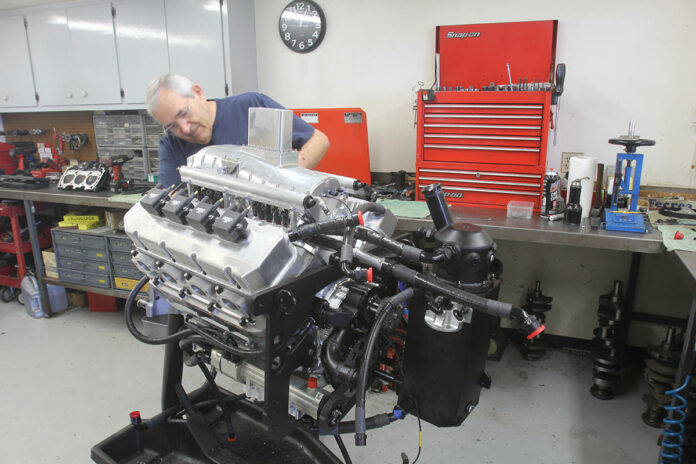 Part II: Big-Block Chevys = Where the Rat Tilts the Game

The big-block Chevy as we know it today was big news in 1965. The Corvette and fullsize cars debuted a replacement for the antiquated 343/409 W engines with some ancestral connections, like the crankshaft. But for the techno-engine geeks, the Rat was noteworthy for the odd valve angle cylinder heads. The 427 and its smaller-inch brother 396 both sported a set of “porcupine” heads, no-doubt offered by some journalist who made the connection between the big-block’s bizarre valve angles and that rodent with its protruding quills.

If you didn’t catch our Part I story on small-block valve angles (July ’21 issue), we’ll step back a moment to define our use of the term valve angle. This is a valve angle measured in degrees that references off of the centerline of the cylinder bore. So if we were to measure the angle of an OE big-block iron or aluminum head, we’d see there is a 26-degree angle to the intake valve from the bore centerline reference point. The stock exhaust angle is a much more vertical 17 degrees. Both valves are canted by 4 degrees in opposite directions.

Oddly, you would think that the big-block might have benefitted from additional research and perhaps have utilized a taller intake valve angle, but in fact that angle is actually greater than the small-block 26 degrees versus the small-block’s 23 degrees, but the Rat sports a 4-degree tilt of both the intake and exhaust valves. In a typical wedge combustion chamber cylinder head like the small-block Chevy, the valves are arranged in a single file. But big-block cylinder head designers departed from that concept by tilting the intake valve 4 degrees toward the center of the cylinder. Actually, both the intake and exhaust valves are tilted 4 degrees but in opposite directions to enhance flow.

While all production Rat heads maintained that fixed 26-degree valve, the aftermarket was quick to recognize the benefit of moving that intake valve angle to improve airflow. Dart has been at the forefront of cylinder head development, which can be traced back to Dart’s then-owner Richard Maskin’s deep involvement with NHRA Pro Stock drag racing. As we’ll see, Dart’s cylinder head repertoire is closely tied to the cylinder head development that can trace its origins back to the beginning of NHRA 500ci Pro Stock drag racing.

It wasn’t long before most aftermarket big-block heads were using a 24-degree valve angle to enhance flow with the exhaust at 15 degrees or what are now called rolled heads at 2 degrees from stock. These redesigned heads also retain the 4-degree tilt angle. What was once current technology in the ’80s can now be seen as big-block street heads with options for both oval- and rectangle-port designs. The earliest Chevy production heads always used the larger, rectangle ports on the high-performance applications. While we won’t dive too deep into port design in this story, oval ports are now considered the more efficient design. This is because the corners of a rectangle port tend to be dead flow areas that cause turbulence. Current Pro Stock technology uses an oval configuration.

We will use Dart heads as our examples on this jaunt through the various big-block Chevy valve angles, but there are certainly many other companies that also offer cylinder heads with taller valve angles, such as AFR, Brodix, MBE, Pro-Filer, TFS, and others.

Within the 24-degree family, Dart offers everything from a relatively small, high-velocity street 275cc oval port head all the way up through 365cc CNC-ported heads that can easily accommodate a 2.350-inch intake valve in its 121cc combustion chamber. This particular 24-degree 365cc CNC ported head can flow up to 414 cfm at 0.700-inch valve lift, which is a monster improvement over an old cast-iron rectangle-port head like the 088 castings that can flow around 300 cfm at the same valve lift and test depression.

Not much later, Dart repositioned the valve angle again, this time to 20 degrees with the largest casting offering over 450cc oval intake ports that still retain the ability to fit conventional intake manifolds. Generally, as the intake valve angle becomes steeper it also requires raising the intake port entry point to produce an efficient path into the bowl area.

As the valve angle changes this also alters the angle at which the valve approaches the piston. The original 2-degree roll from 26 to 24 degrees is slight enough that most off-the-shelf pistons can accommodate the change. A taller angle of 20 degrees or more will demand custom-cut pistons to offer proper piston-to-valve clearance. This is becoming prevalent enough that certain piston companies like JE are now making dedicated 20-degree valve angle pistons for larger-bore big-blocks.

Continuing the progression, the next Dart move was to 18- and 14-degree configurations. The taller, 14-degree version of these two Race Series castings offers up to a 440cc rectangle intake port that is intended for maximum Top Sportsman and Top Dragster applications for engines well in excess of 500 ci at 7,000 rpm and above. These monster castings feature 2.400-inch intake valves and 1.900-inch exhausts nestled in a compact 87cc chamber.

Note how as these heads move toward a taller intake valve angle that combustion chambers also become more compact. The taller valve angle is the major contributor to this phenomenon. Especially with the huge 2.50-inch intake valves, a flatter entry angle into the chamber allows these larger valves and also does not require as deep a chamber to accommodate them.

There are multiple advantages to smaller chambers beyond just the fact that compression is now easier to build without having to resort to huge piston domes that kill combustion efficiency. The most efficient combustion space is a near-flat piston with only small valve reliefs and no large lump that the flame front must negotiate. A flatter, more compact combustion area also requires less initial timing to make best power. Higher ignition timing numbers begin the combustion process early, which requires the engine to overcome increasing cylinder pressure before top dead center. Engineers call this negative work, which is subtracted from the engine’s actual power.

Valve angle migration has eventually led to the Big Chief II 11-degree, 555cc CNC oval-port maximum Top Sportsman head intended for 550ci and larger engines. This is a spread-port head, which means the intake ports are relocated farther apart with wider valve centerlines, raised intake and exhaust ports that also demand their own intake manifold. Dart’s flow bench testing reveals intake flow numbers of 534 cfm using a 2.500-inch intake valve at a full inch of valve lift. Combine that with tiny 90cc combustion chambers and there are serious horsepower numbers that can be churned out on a big-inch Rat with these heads.

Do you need to go all the way to 14- or 11-degree heads to make big power? Not if engine builder Ken Duttweiler’s experience is worthy of note. He recently built a 557ci big-block for George Poteet’s amazing Speed Demon streamliner in the quest to set the all-time AA/Blown Fuel Streamliner (AA/BFS) record at Bonneville. Duttweiler used a pair of what some may consider conservative cast-aluminum Dart Pro1 Big Chief 20-degree heads that he bolted on with no port modifications. Of course it helps when you’re pushing air through these heads with up to 35 psi of boost using a pair of 88mm Precision turbochargers. That’s how you get to 3,156 hp at 8,300 rpm on methanol. Just let that sink in for a moment—3,156 hp!

The current approach to big Rat power is pushing massive amounts of air with superchargers and turbochargers, and this clearly benefits from all this enhanced cylinder head technology. Most ideas that improve airflow and power on a normally aspirated engine will also apply to supercharged engines. Often, they can enjoy even larger intake ports all in an effort to reduce restrictions to flow. Nobody could have guessed when the Pro Stock innovators like Reher-Morrison and Shepherd first experimented with moving ports and slicing up a set of big-block Chevy cylinder heads in the early ’80s that it would lead to this amazing collection of Rat-rolled valve angles. It’s all in the name of more horsepower. All you have to do is pick your angle of approach.