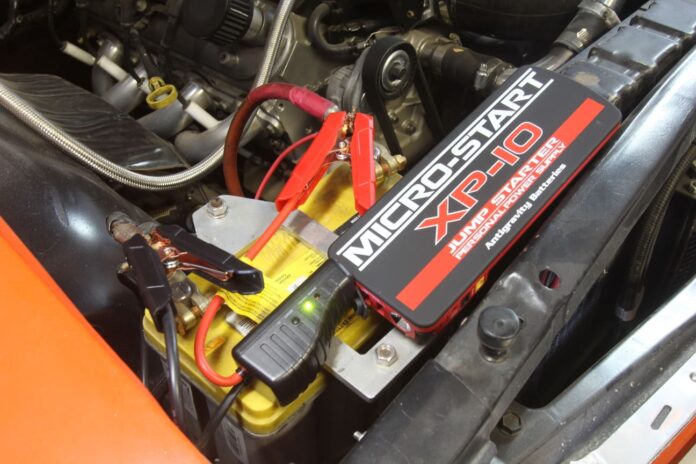 From the day of the first dead car battery 100 years ago, resuscitating a flat battery requires a set of jumper cables, a secondary power source (like another car), and sufficient room to place the cars close enough to connect the cables. Even then, the effort was not always successful. Often, cables were either too short or featured such tiny cables that amperage just didn’t flow, and the inert battery remained flat. Worse yet was the feeling of helplessness when you’re standing there with jumper cables in your hand and no one offers to help.

All of that should now be placed firmly in the past. With the development of powerful lithium-ion batteries, a sharp engineer came up with the idea to build a portable battery pack that could fit in your hand with enough power to crank a near-dead battery even when hooked to a large V-8 engine. When these units first appeared, we were skeptical, but performance has actually proven their worth. We’ll take a look at how these units can deliver tremendous starting power from a small package. We chose one of Antigravity’s XP-10 jump packs from Summit Racing as our test unit.

Veteran hot rodders will remember older starter packs as heavy, bulky, and oftentimes more of a hassle than they were worth. They had to be constantly charged and maintained and often were still not up to the challenge. This was mainly due to the use of conventional lead acid batteries as the power source. The introduction of lithium-ion batteries offers a major energy density advantage over their lead acid cousins.

A lithium-ion battery produces power in a range from 50- to 260-watt hours per kilogram (Wh/kg) compared to a typical lead-acid battery with a rating of 30 to 50 Wh/kg. With up to five times the power for the same weight it became possible to house sufficient starting power in a lightweight package. Another reason is that in addition to greater energy density, lithium-ion batteries offer the ability to transfer large amounts of amperage very quickly even when the jump battery charge state is less than 50 percent. Lead acid batteries quickly falter when the voltage drops but lithium-ion batteries are able to deliver high-amperage loads effortlessly.

This is a major advantage and one reason why these new jump packs are so powerful despite their compact size. For example, the unit we’ve chosen to test is from Antigravity Batteries and is the second largest version in the Micro-Start line of jump boxes. This unit offers several features, but we will first look at the power specs because they require some explanation.

Every car guy knows that it takes lots of current to spin a starter motor on a big V-8 engine. These portable jump boxes do not have the energy to do this on their own but do work very well to transfer a large amount of amperage to the existing car battery when it needs some help to crank the engine.

Let’s begin with some of the specs from this Micro-Start 10XP.  The company lists this unit’s starting amperage at 400 amps that can peak to as much as 600 amps. These numbers will be available even if the jump box battery is not fully charged. However, due to their small size, they cannot deliver this amperage for more than about 3 to 5 seconds at a time. The XP-10, as with most similar packs, employs a safety circuit that prevents overheating the battery in the jumper if operated at full output for more than the 3- to 5-second limit. This may be slightly frustrating for the user, but it prevents damage to the jumper.

Peak amperage is a rating of the maximum amount of amperage the unit can deliver. Note that the largest capacity unit is the XP-10HD, which offers another 50 amps of peak to 650 amps compared to the XP-10. The largest number is achieved by activating the “boost” button on the cable adapter.

Capacity is a different rating scale. This references how long the unit can sustain a constant amperage draw. The larger the capacity number means it can withstand several more starting attempts before running out of power. The XP-10 is rated at a capacity of 18,000 milli-amps per hour (mAh).

The milli-amp hour rating indicates how much of a charge this unit can maintain and allow multiple attempts at starting a car. For example, the 8,000 mAh rating of the smaller, XP-3 is probably sufficient to start a 5.7L V-8 on a warm, 70-degree day. However, it may be challenged with starting that same engine with a heavily discharged battery at a much chillier 20 degrees F. This occurs because all batteries are rated at their ideal temperature of 80 degrees F. All batteries lose efficiency when the temperature either exceeds or drastically drops below its rated temperature.

This loss of performance in cold climates occurs because as the temperature drops, all batteries are less efficient at delivering the amperage and voltage required to start the engine. This is especially true with lead acid batteries. This is why most times a completely dead battery is much more of a challenge to jump with one of these boxes than a battery that is merely discharged but still retains some power. At 32 degrees F, a lead acid battery loses 20 percent efficiency and at -22 degrees F, this plummets to 50 percent of its cold cranking capacity. So, a battery with 600 cold cranking amps (CCA) at 77 degrees F will fall to barely 300 amps when the temperature drops below 0. Adding to this challenge, the engine itself will be more difficult to spin, requiring more starting power to do so. This is when a battery jump pack can kick the existing battery with enough power to start the engine even in the coldest weather.

So, when it is time to use the battery pack, it will not offer 100 percent capacity with the first attempt to the start the engine. This is compounded by the fact that the jump battery is also cold. That first attempt will warm everything as current flows through both batteries. This is why a jumper will often succeed on the second or third attempt to start the engine. Jump starters can deliver most of their rated amperage even if the battery pack retains a less than 50 percent state of charge, something lead acid batteries cannot offer.

In addition to the power for starting, jump packs, like the Antigravity Micro-Start, also offer several safety and highly useful features. For example, the adapter plug will indicate if the jumper cables are improperly connected, preventing damage to the jumper box. It also has a built-in safety feature that prevents overheating the box from excessive discharge rates.

The XP-10 unit we obtained from Summit Racing also features several adapters to charge items like a cell phone, laptop, or tablet from the jumper box. The Micro-Start line also features an LED flashlight for times when you need illumination. As mentioned, Micro-Start line of jump boxes also offers a series of lights to indicate its charge level from 20 to 100 percent. Plus, the Micro-Start includes both mobile and home chargers.

According to our friends at Summit, the Antigravity units are among their best-selling units and that’s why we decided to try this unit in a dedicated cold-start test. We’ve recently completed a move to the Midwest and a sub-0 cold snap hit our V-8-powered S-10 really hard and hammered the existing battery. Our battery had some power, but at 11.9 V it had less than 25 percent charge—not near enough to crank the engine.

Our first test tried the Micro-Start after storing it in the shop at 50 degrees F. The Micro-Start easily cranked the engine, allowing it to start. We tried and started the engine three times all successfully. Our next test placed the Micro-Start in the truck overnight with its near 0 temperature and we did not recharge the unit. Our test the next morning revealed how this unit performs when subjected to low temperatures.

Because cold batteries are less efficient, our first attempt at jump starting our 355ci small-block Chevy met with a too-slow roll of the starter motor. The second attempt tried but still failed so we ended that attempt. By this time, current flow had warmed the jumper pack slightly and the third attempt met with success and cranked the engine with enough speed to successfully get it running.

By this time, we had only depleted the battery in the Micro-Start to 80 percent and it still had sufficient power to start the S-10 after multiple attempts in 18 degrees F weather. The patent company Antigravity Batteries claims this XP-10 unit is capable of as many as 45 starts on a single charge, depending upon the amperage draw from the repeated attempts.

One oncern with these jump packs is that they do not have a long-term lifespan. Antigravity admits that all lithium-ion batteries begin to lose effectiveness from birth. Antigravity claims that the average battery lifespan is about 3 to 3½ years, although they recommend that if the owner uses the battery pack to charge small components like cell phones or laptops (as opposed to sitting idle) this will increase the battery’s potential length of service.

Hopefully this evaluation has been of some assistance in your search for a jump pack that is small enough to easily store in your car that has the power to bail you out of a no-start situation.