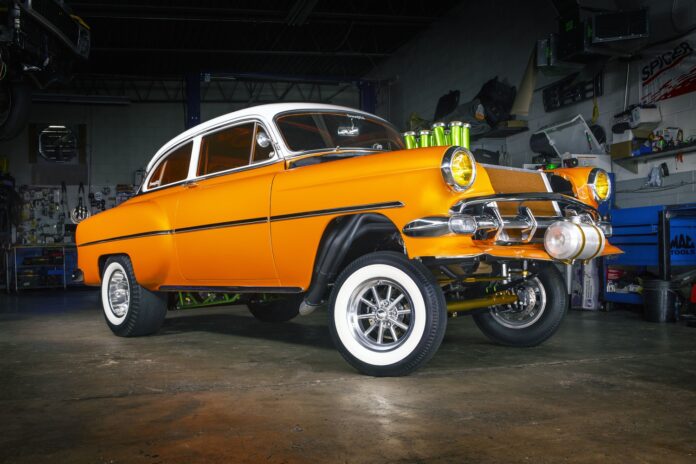 One of the things about age is that it often forces us to reflect back and examine our past. Inevitably, we look at the mistakes and also the successes of life. When it comes to the automotive realm it’s often the one that shouldn’t have been sold, or the one we wanted but couldn’t afford. For Bob Fultano, his car rewind goes back to his teenage years. “I got my first car when I was 15,” he recalls. “It was a ’55 Chevy and over the years I’ve had numerous Chevelles and Novas–all big-block cars.” One taste that he acquired early on was for gassers, to the point that it eventually grew into a bucket list item. Fulfilling that desire came about back in 2019 when he started looking for one online. He stumbled across this ’54 Chevy a few states away in Maryland, which prompted a road trip. Shortly after, a box was checked off the bucket list. Bob ended up buying what appeared to be a complete gasser that was show-and-go ready–but in his eyes it was far from it. The paint, interior, and wheels all looked the part, but it had a lukewarm Chevy 350 small-block with aluminum heads, a mild cam, Holley 750 carb, all backed by a Turbo 350 automatic. He explains, “It could barely get out of its own way. For me, I kind of like to overdo things, and I’m really a big-block guy.”

Visually, he was happy with the car, but fixing the performance side meant finding someone who could get the job done. Familiarity has its perks, and in this case he turned to Bill Moss Auto Repair for that mechanical makeover. Bob has had a few cars that Bill has wrenched on over the years so he trusted him with the project. From Bill’s perspective this was a new challenge for him, and somewhat out of his wheelhouse. He’s built some insane turbo cars but a gasser was uncharted territory. When Bob drove the gasser into his shop, the assessment Bill made was right along the lines of what Bob saw. He notes, “You couldn’t even go 40 miles an hour because it would shake you out of the seat and unexpectedly switch lanes.” 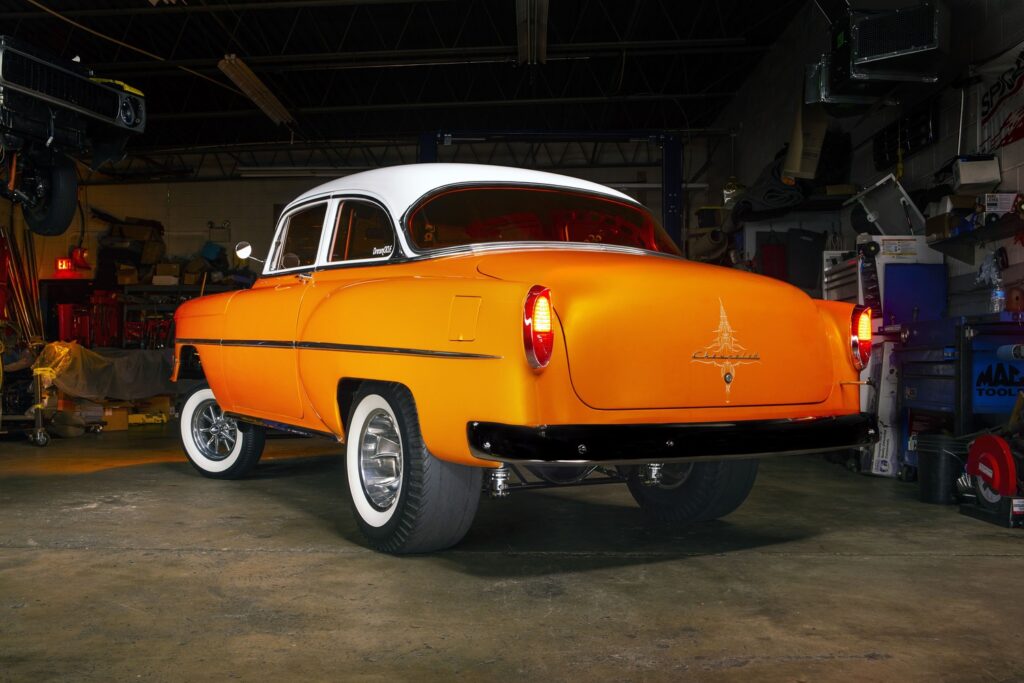 As the project started to move forward, Bill’s approach was to be as well-informed as possible, and that was accomplished by speaking to a number of seasoned builders who had constructed gassers in the past. From Bob’s end, his involvement was to research, source, and write the checks for what it would take to get the job done. Since the body was a non-issue, Bill’s main focus was to make the frame suitable for the horsepower infusion it was going to receive. To help with this, he enlisted the assistance of local fabricator Dave Riddell of DC Customs. From front to rear it was boxed and reinforced with 1 5/8-inch round bar. 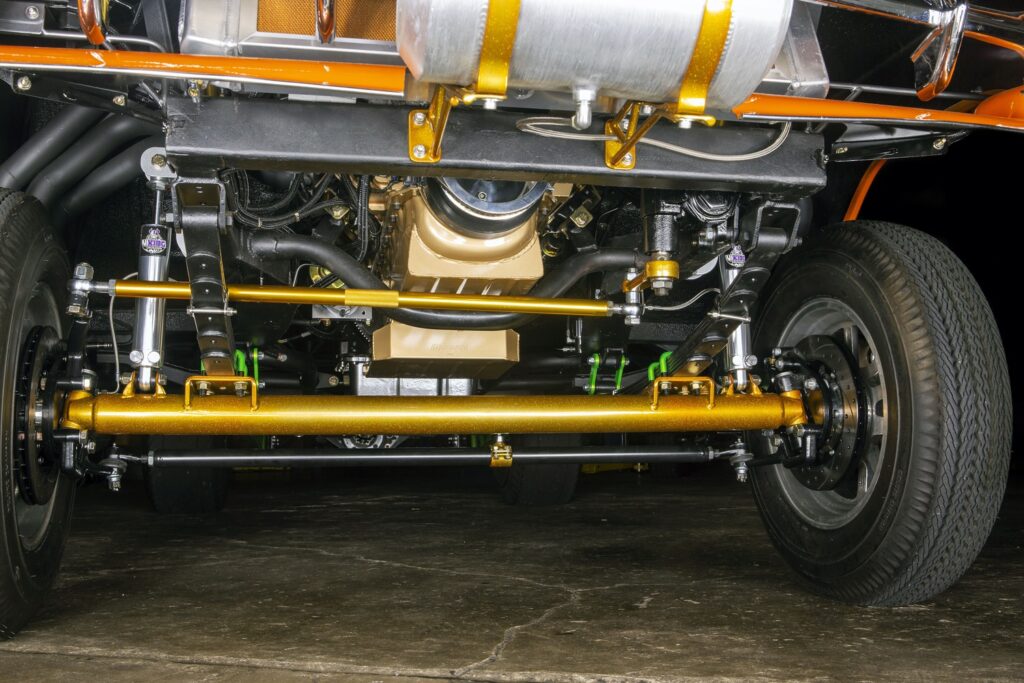 With the fame now in good shape, the next item on the list was the rear suspension. The leaf spring configuration didn’t inspire any confidence on its ability to hook up, and the ’55 Chevy rearend was pushing the tires out to the limits of the rear wheelwells. Bill’s remedy for that came in the form of a 45-inch custom Auto Weld Ladder Bar suspension and the addition of a narrowed Ford 9-inch nodular rear with a spool and a set of 3.89:1 gears, along with adjustable Viking shocks. A rethink up front was also in order. Bill explains, “The problem with these cars is that up front, if they’re wrong they are really wrong and not drievable.” Bob’s research led him to Connecticut-based WAC Customs. Bill Carlson at WAC was a wealth of information when it came to dialing in the geometry of the 21×2-inch moly axle and HD shackle kit for the ’54, but mounting the suspension up front required a fair amount of custom fabrication on Bill’s part. Viking adjustable shocks were also added, along with a brake upgrade consisting of Wilwood rotors and calipers on all four corners. 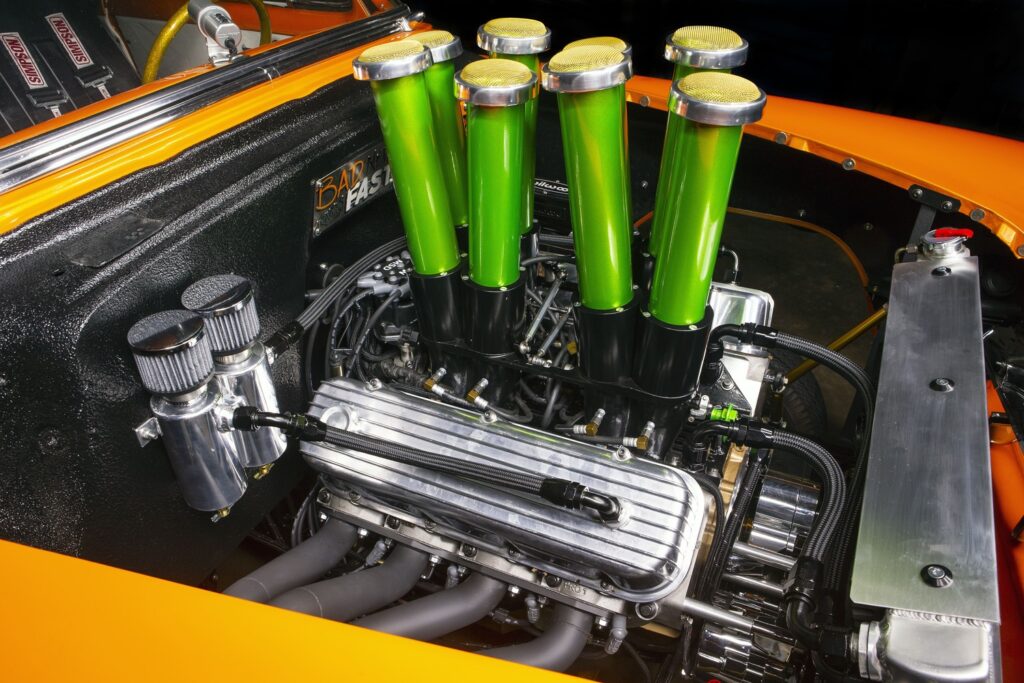 All of this work was in preparation for the 540ci big-block Bob was having built at Nyes Automotive in Muncie, Indiana. The foundation for this mill was a brand-new Merlin IV cast-iron block with some Dart Pro1 aluminum heads. Initially, Bob toyed with the idea of slapping a blower on it but Bill suggested that going with a Hilborn mechanical stack injection converted over to a Holley EFI system would make even more sense. That addition went hand in hand with the Aeromotive fuel cell and pump installed in the trunk. That combination produced decent power, which meant it needed to be backed up by a transmission that was up to the task. For that, Bob opted to go with a GM 4L80 built by TCI. 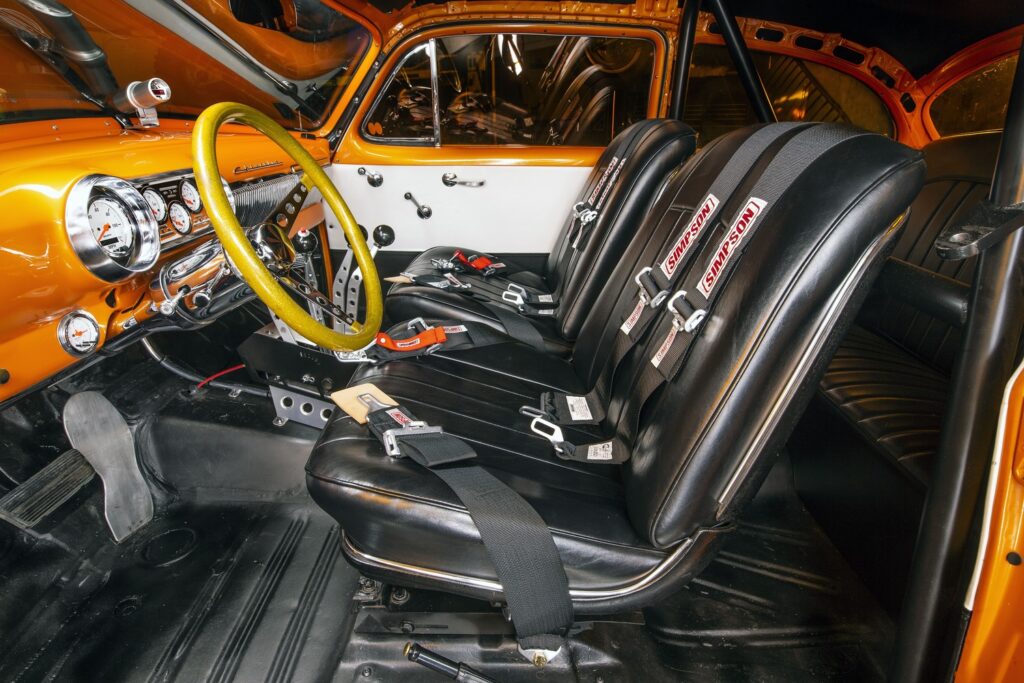 From front to back, under the skin, the ’54 was transformed but there were other issues that popped up as things moved forward. Bill described the car’s wiring as “an absolute mess,” which meant that it needed to be replaced as well. It was rewired with a harness from American Autowire. That allowed him to mount all the MSD hardware inside the car in an easy-to-reach location. The bump in horsepower also meant that the structural integrity and safety of the car needed an upgrade. Bill had Dave Riddell install a rollbar to stiffen it up, while Simpson belts keep everyone properly strapped in.

For Bob this is the culmination of a long-standing belief that he adopted during his tenure in the U.S. Marine Corps. He believes that “hard work–works,” and the end result is a dream fulfilled that took 18 months and a lot of work to pull together. 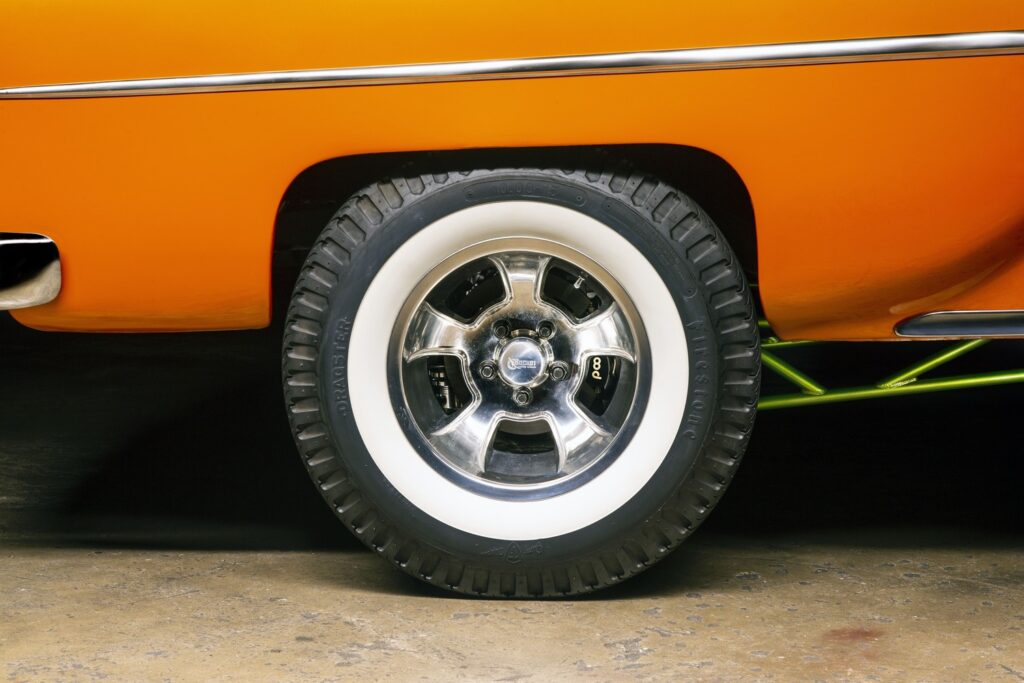 For Bill, the reward is seeing the car completed, and he is particularly proud, for a first-time gasser build, that he was able to pull it off. “The hardest thing for me in the whole build was getting it to the point of how it was going to drive,” he explains. “That was more important than anything else. I’ve never driven anything so dangerous in my life. Now you can drive it 70 or 80 mph down the road and take your hand off the wheel–that’s pretty damn good for a gasser.” 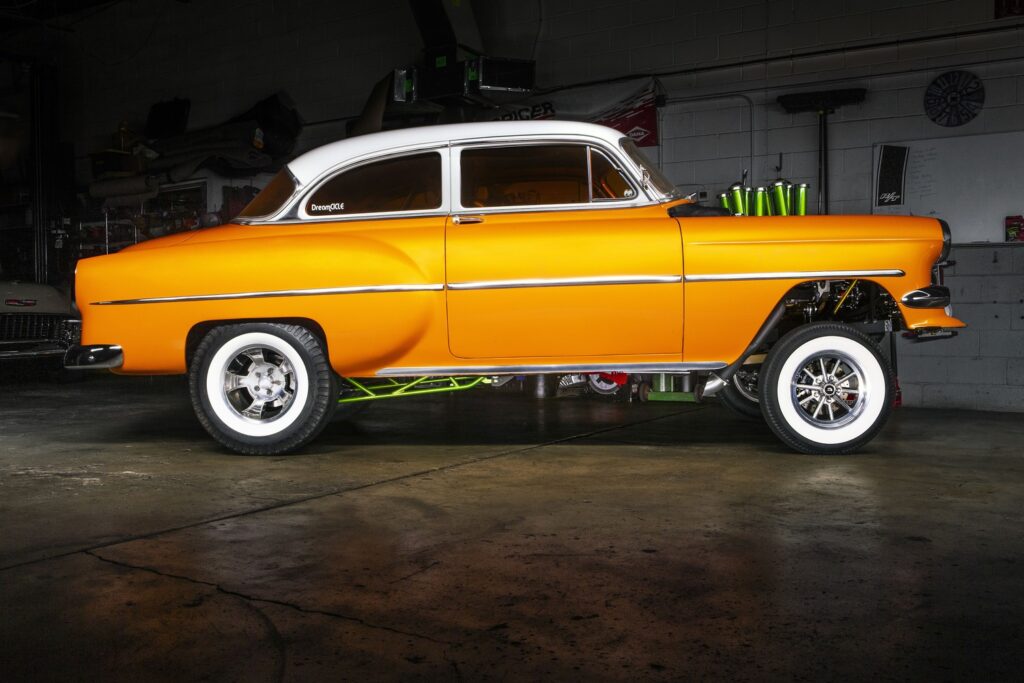