By Eric Geisert   –   Photography the Author

The idea started off simple enough for Bob Matranga. “Some people like to play golf; I like to build hot rods,” he says. “I enjoy showing these cars, I enjoy driving these cars, and that’s what’s driven me all my life.” But if building, owning, and driving a hot rod are at one end of the spectrum, then seriously competing in a car show setting for one of the nation’s highest honors in that field is something else. 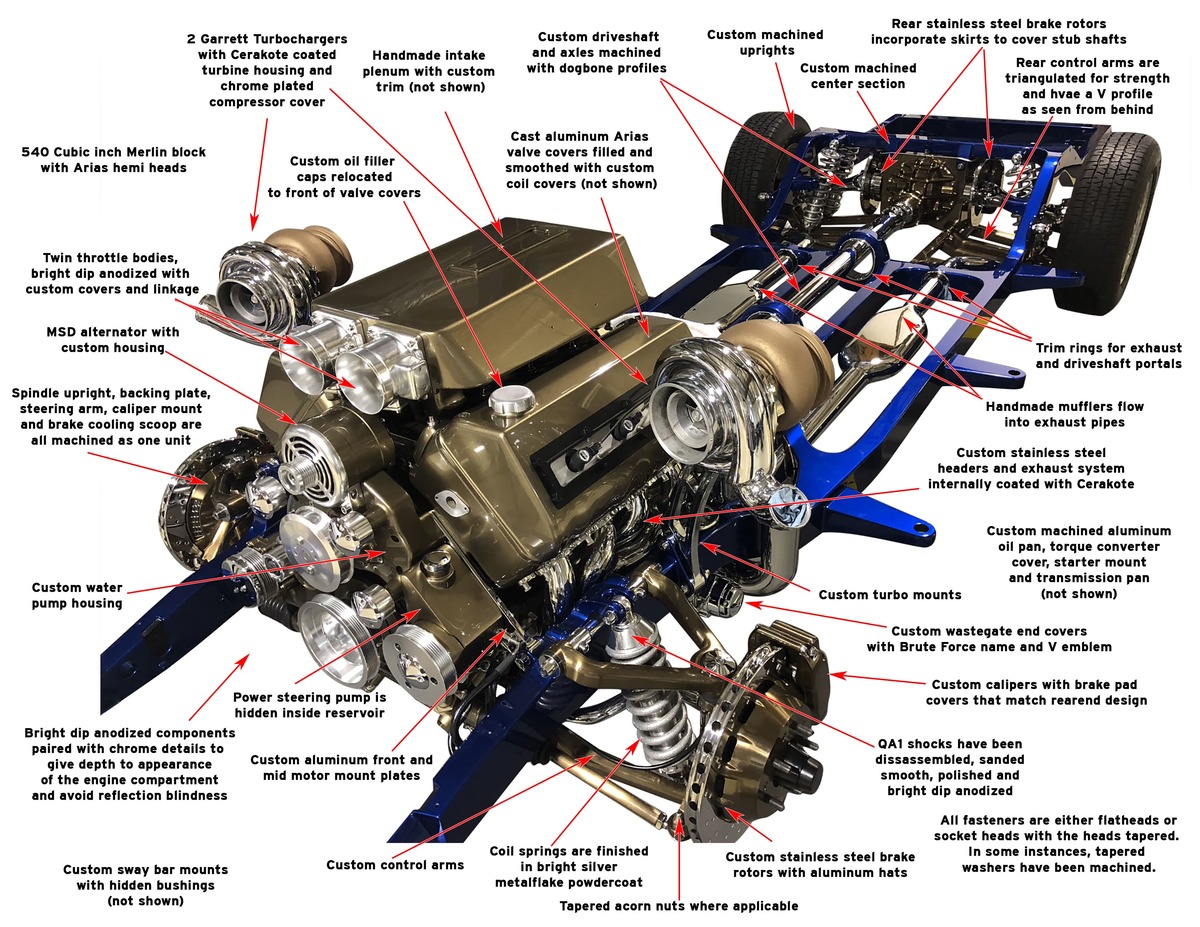 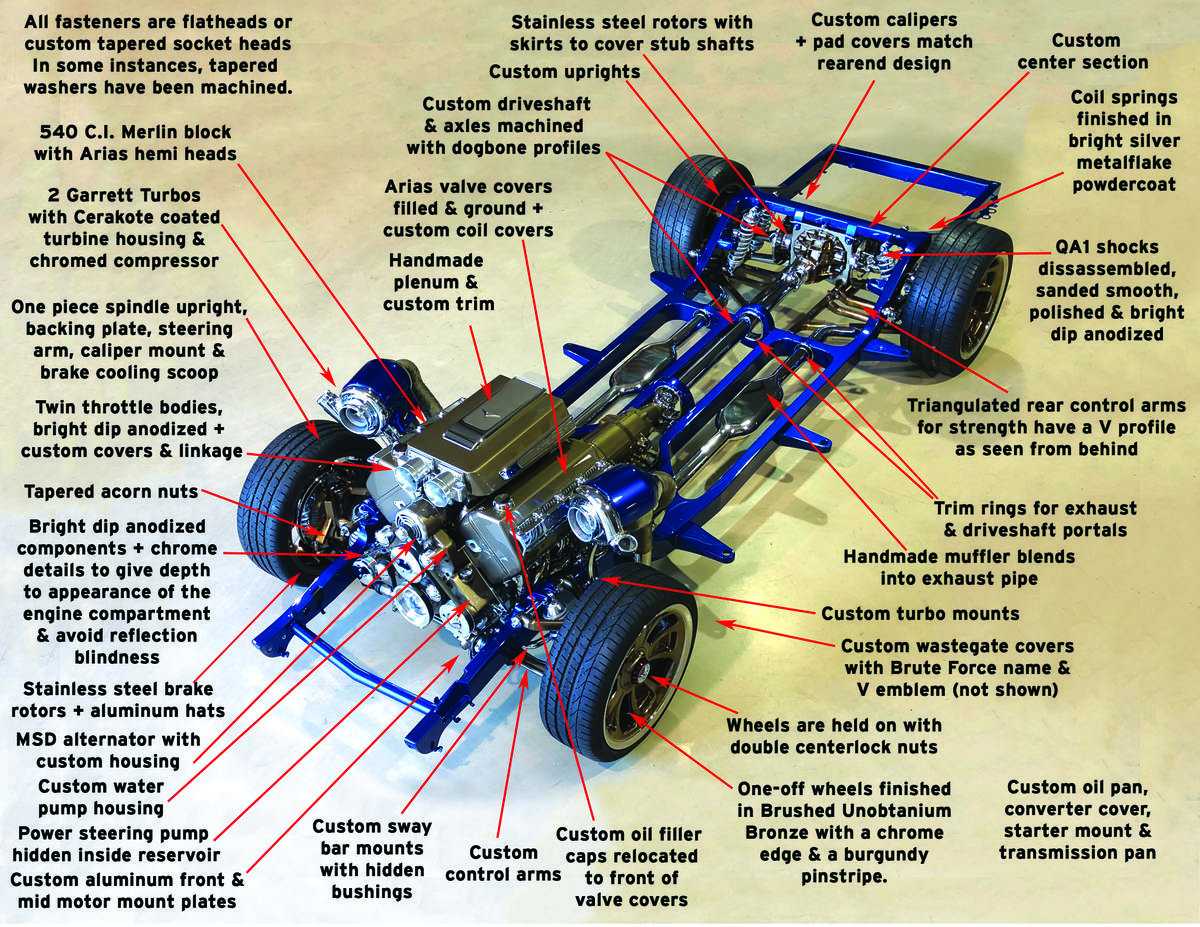 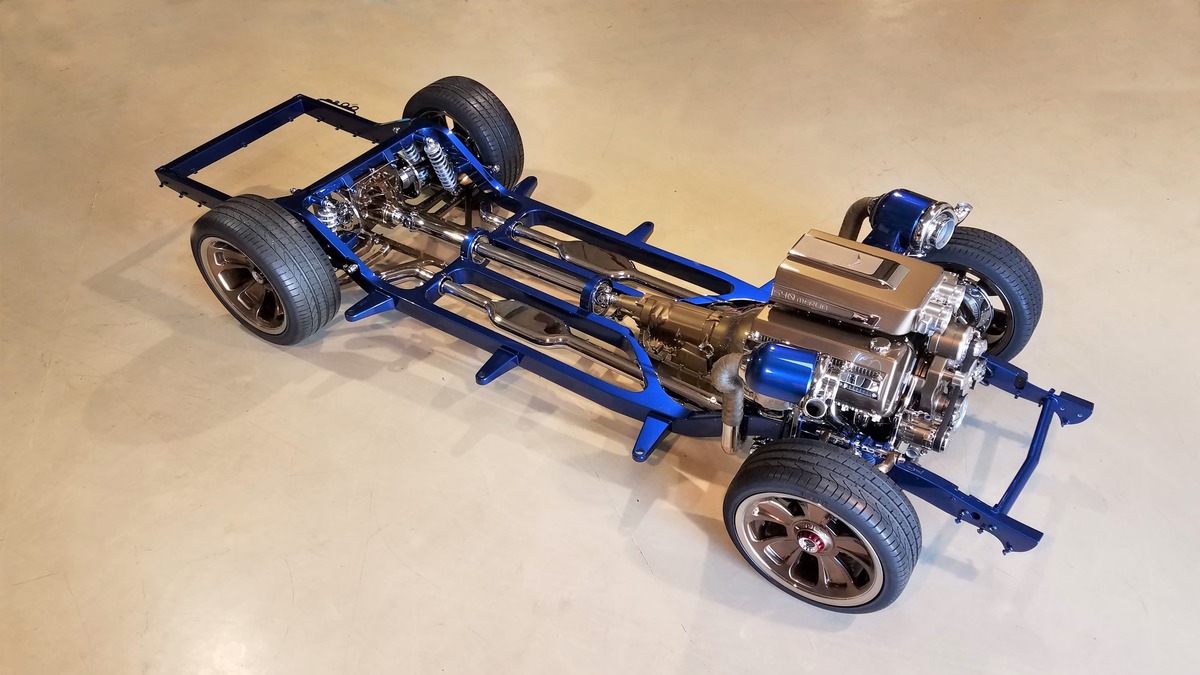 When Bob bought a Bel Air project years ago, all he wanted was “a real nice 1955 Chevy” with full independent suspension and a big motor. So, the chassis was sold and the body fitted to a new Art Morrison chassis with a Kugel Komponents IFS/IRS setup.

But Bob’s natural inclination to refine something until it’s “right” eventually led him to the idea that he’d like to compete for the Don Ridler Memorial Award at the Detroit Autorama. Easily one of the highest honors in the customized automotive world, the Ridler “emphasizes creativity, engineering, and quality workmanship. The vehicle that best represents those three areas will win the Ridler Award.” It’s really the ultimate challenge: to be recognized as the best in a group of exceptional vehicles. 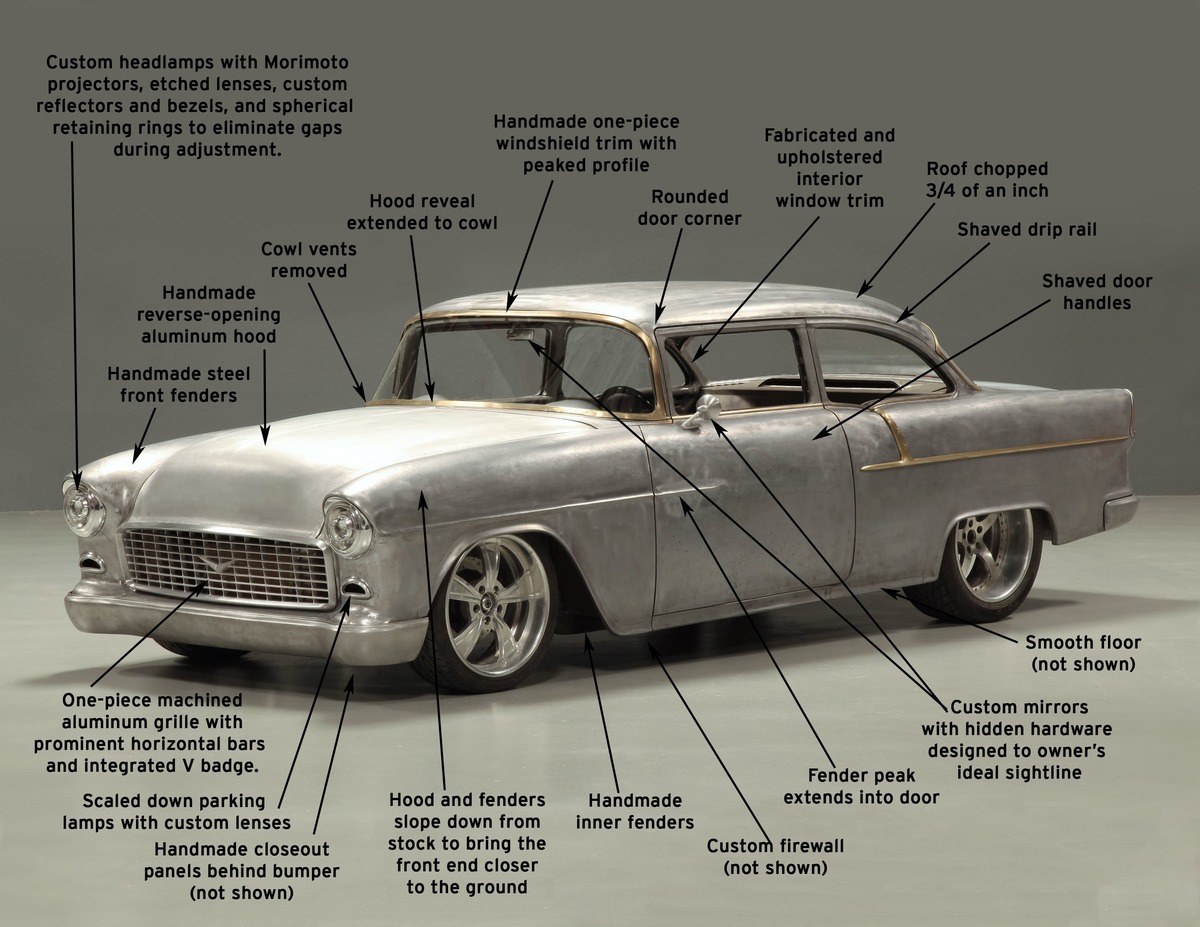 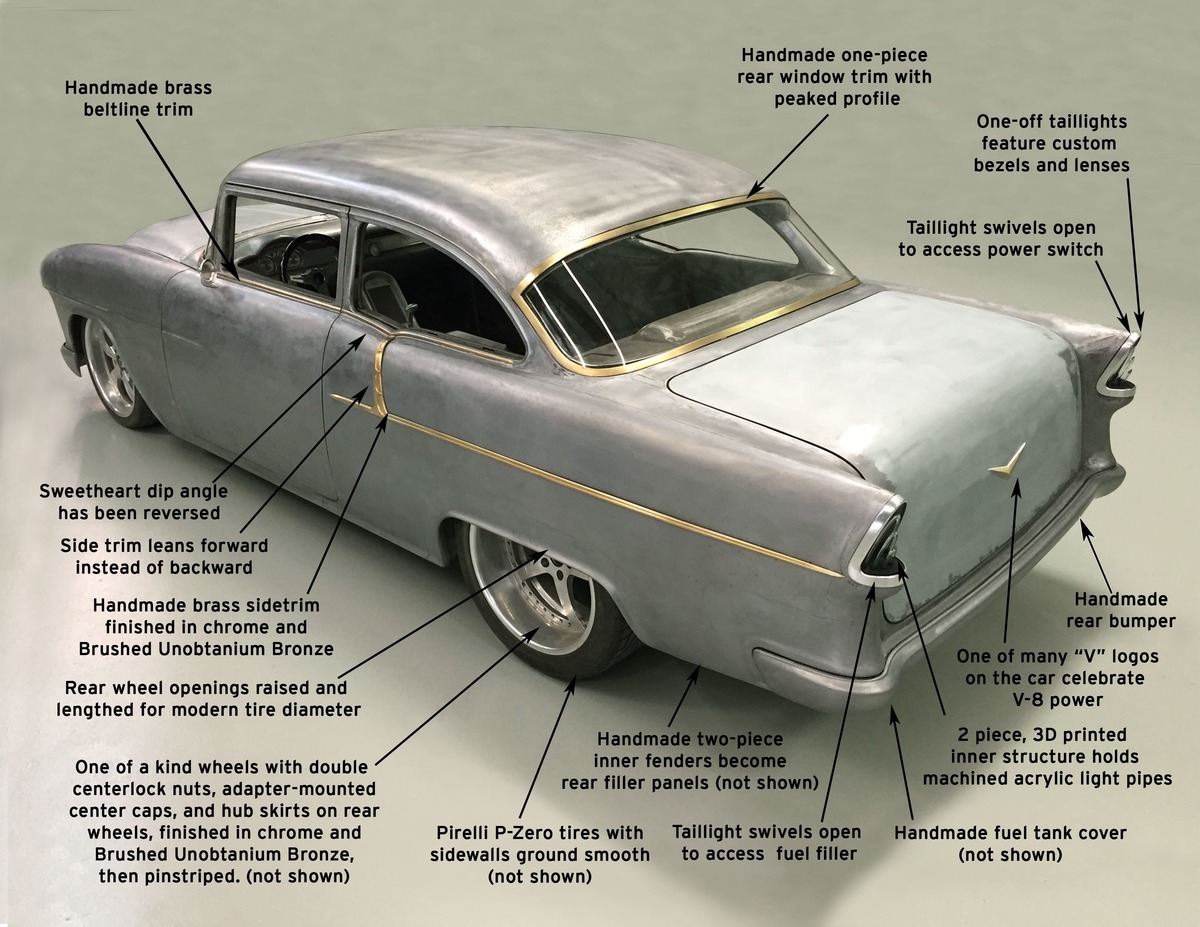 Bob had taken his ride to some shops in the SoCal region that couldn’t perform the tasks he wanted—though they happily cashed his checks. Fed up with the lack of service, he formed Matranga Hot Rods, his own personal shop that would focus on the construction of this one automobile. 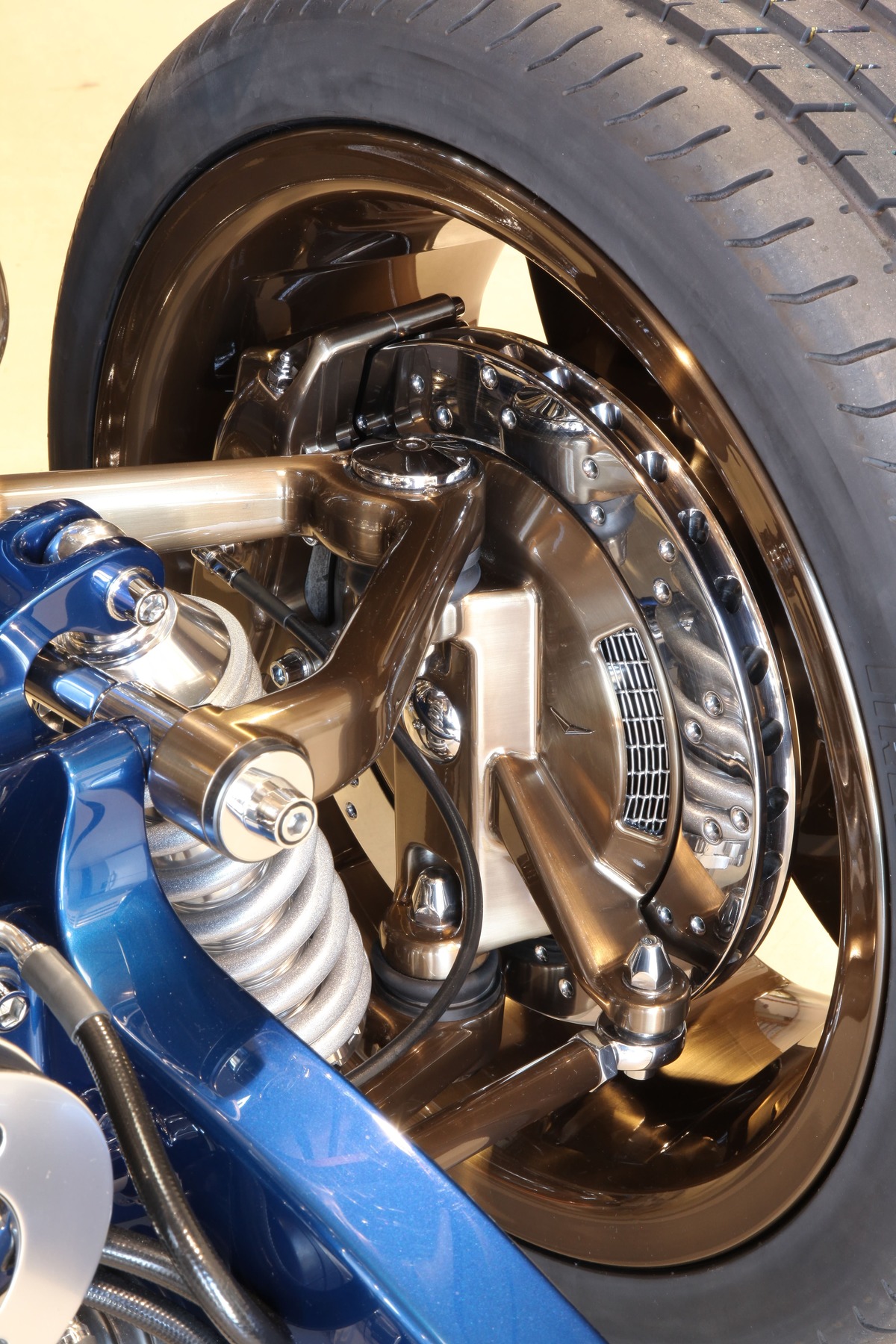 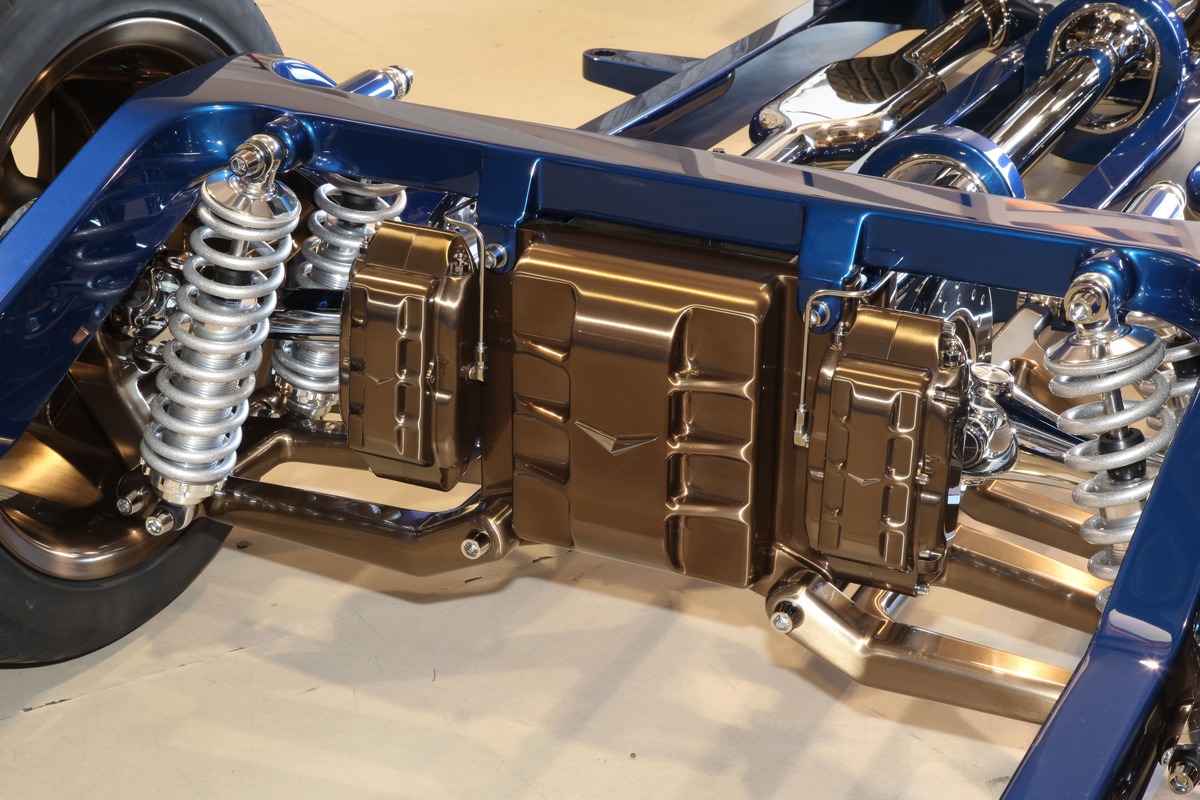 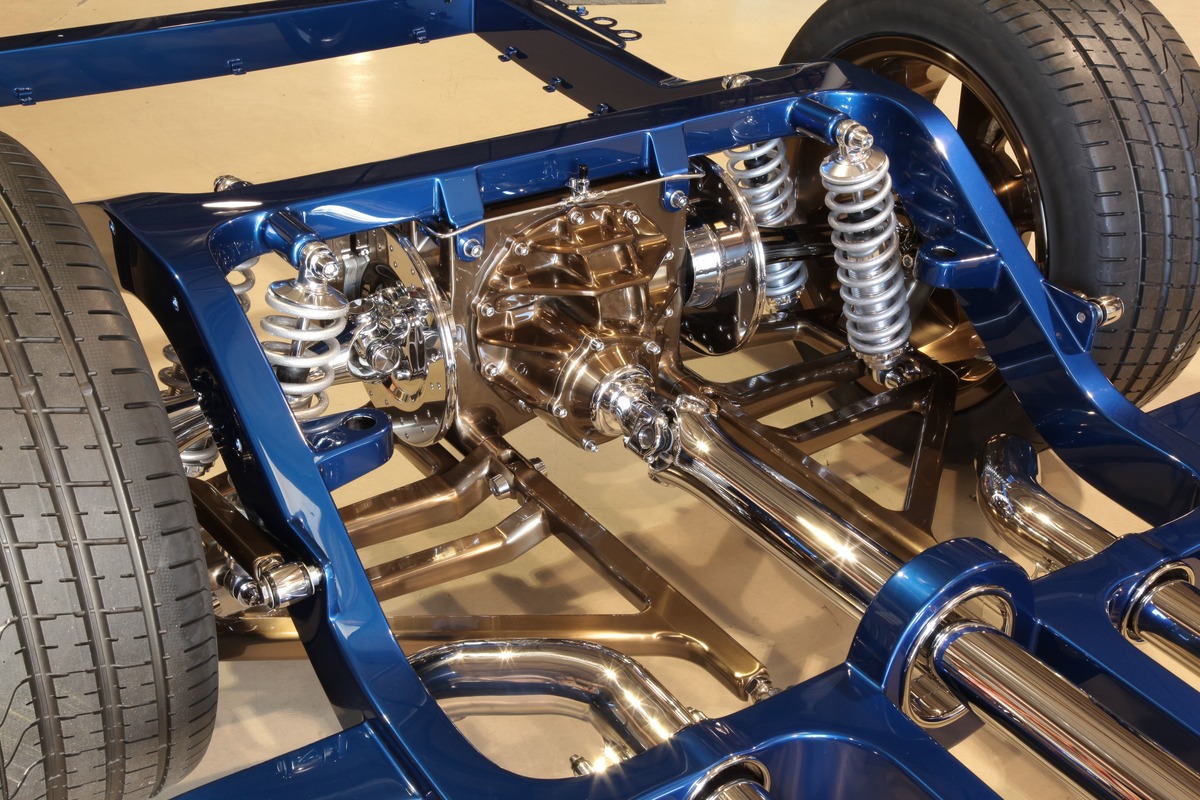 Bob gathered up a core crew of fabricators, which included Paul Hattrup, Ryan Rivers, Bill Brakman, Don Derler, and Chris Brown—an Art Center College of Design graduate, who became both the designer and project manager. The Bel Air might have been the top of the line for Chevrolet in 1955, but this car was about to be shoved light-years ahead of anything else that’s been built, as if you asked “What if we . . . ?” and then multiplied it a thousand-fold. 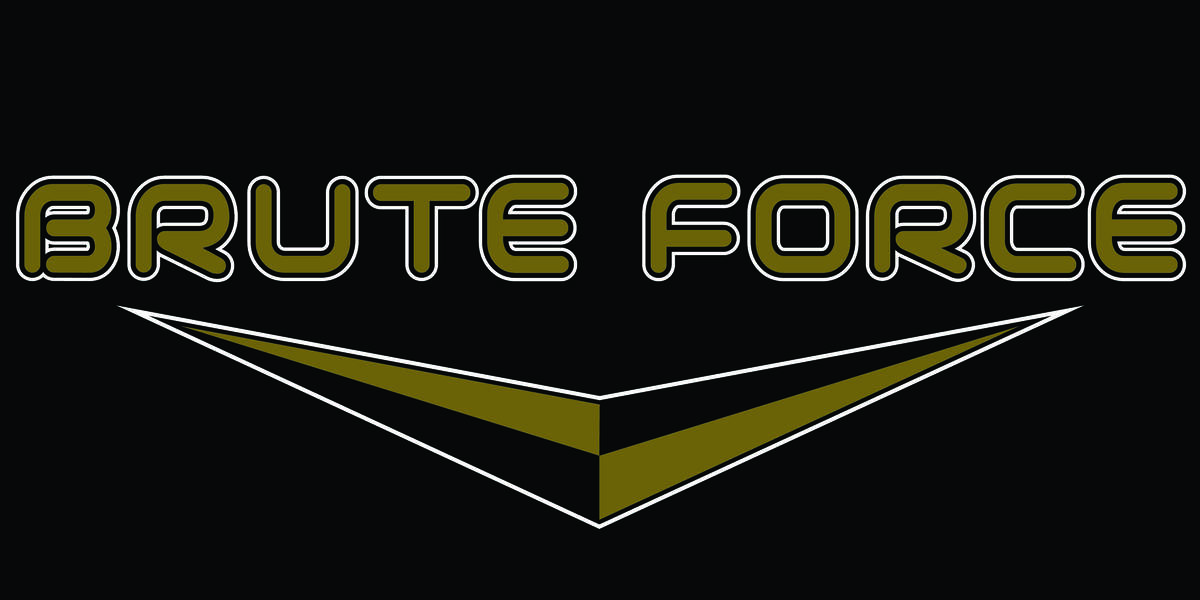 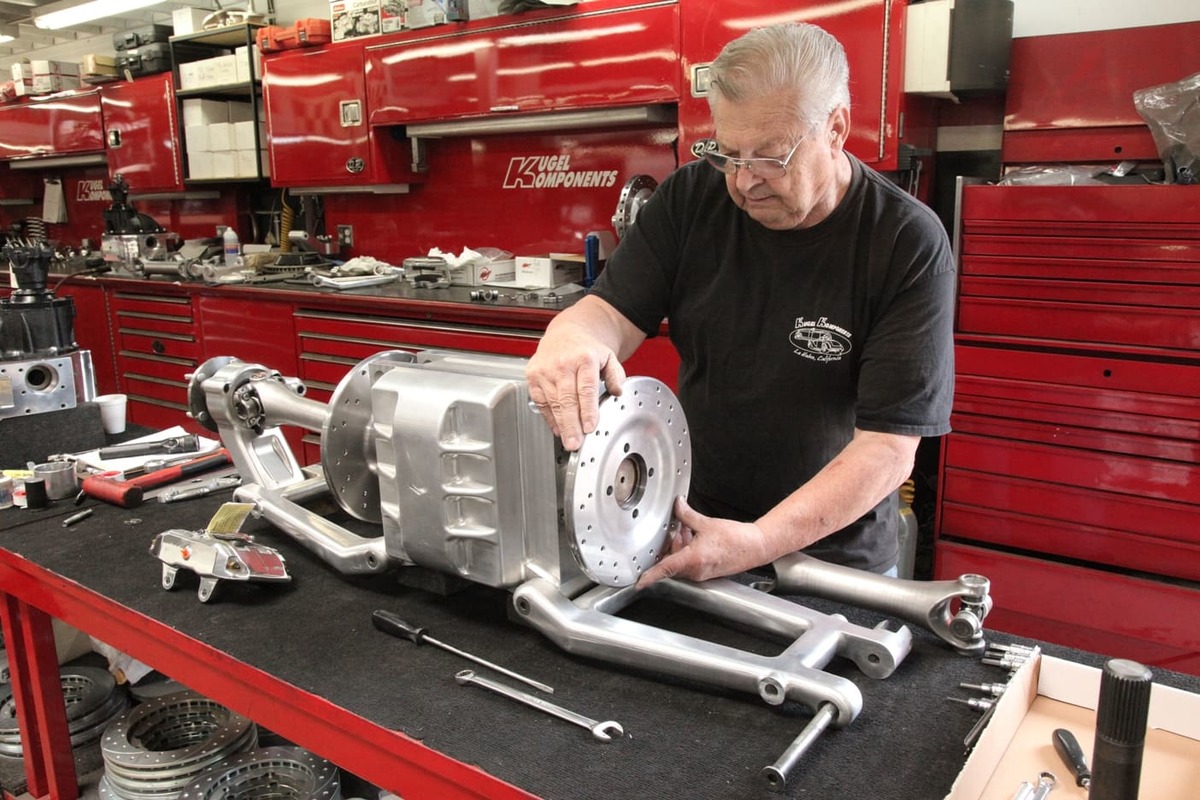 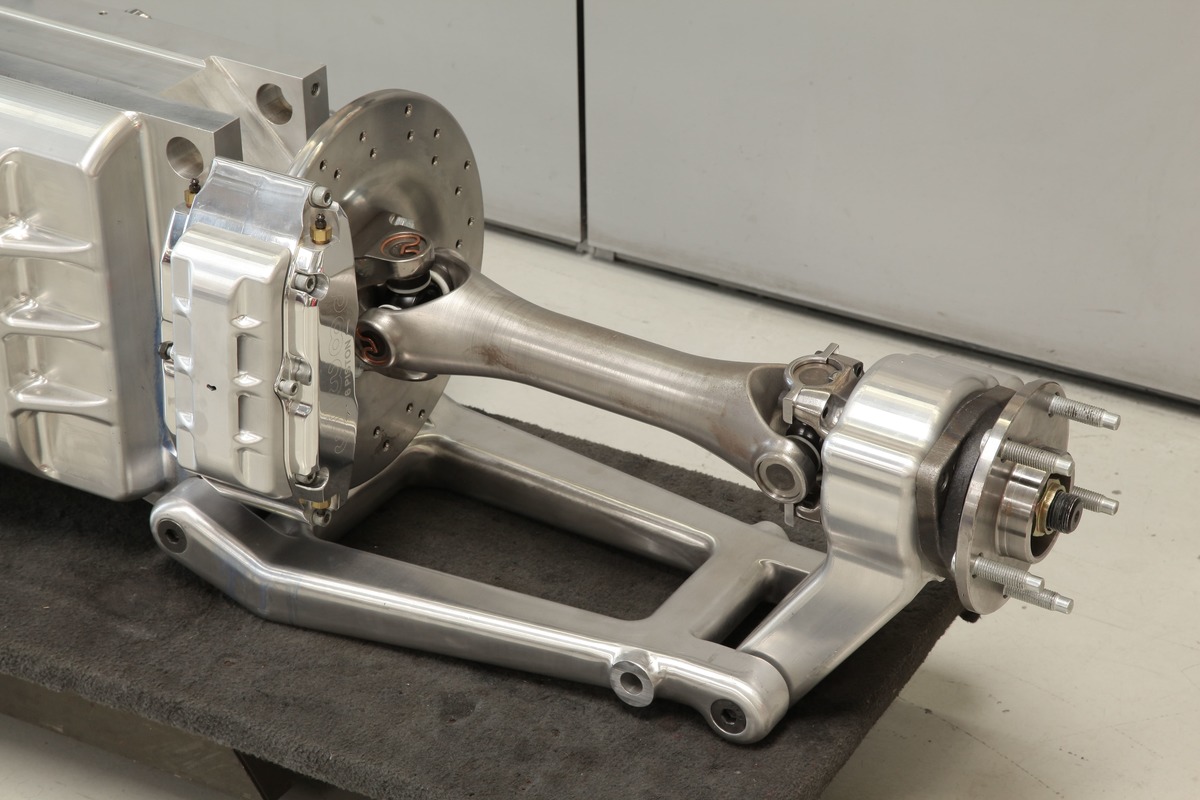 The illustrations Brown came up with gave the car its name, “Brute Force.” As Chris puts it: “When it comes to the design of an automobile, you have two extremes: You have a piece of art, which is what we’re trying to create, in its purist form, and you have something functional, which is basically an appliance. Every car fits in that description somewhere on that scale between appliance and art. We’re trying to push it to the art side as far as we can, but you have to make it functional, too, so you want to try and make it a piece of driveable sculpture.”

Brute Force now uses an Art Morrison chassis (modified for this application), using QA1 coilover shocks on each corner. Jennison Engineering supplied the rear brake rotors and half shafts and RPM Machining milled some of the suspension components, fasteners, and trim pieces. 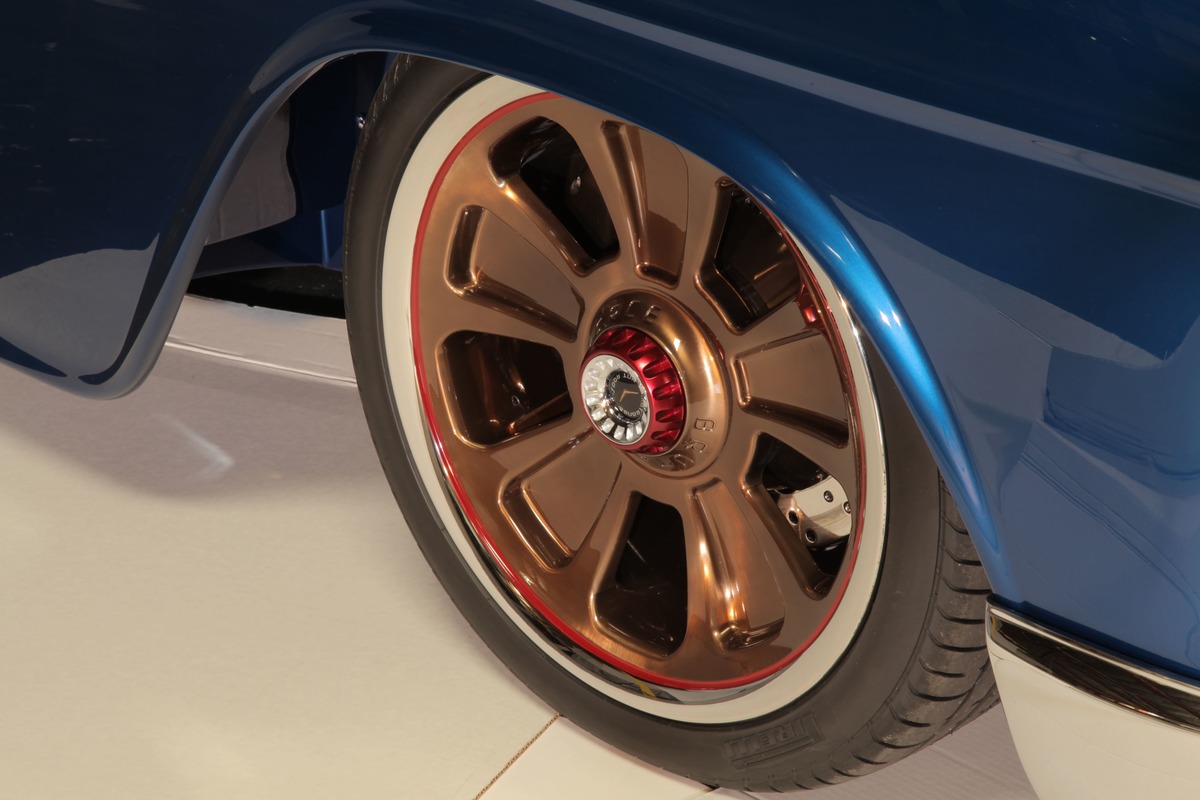 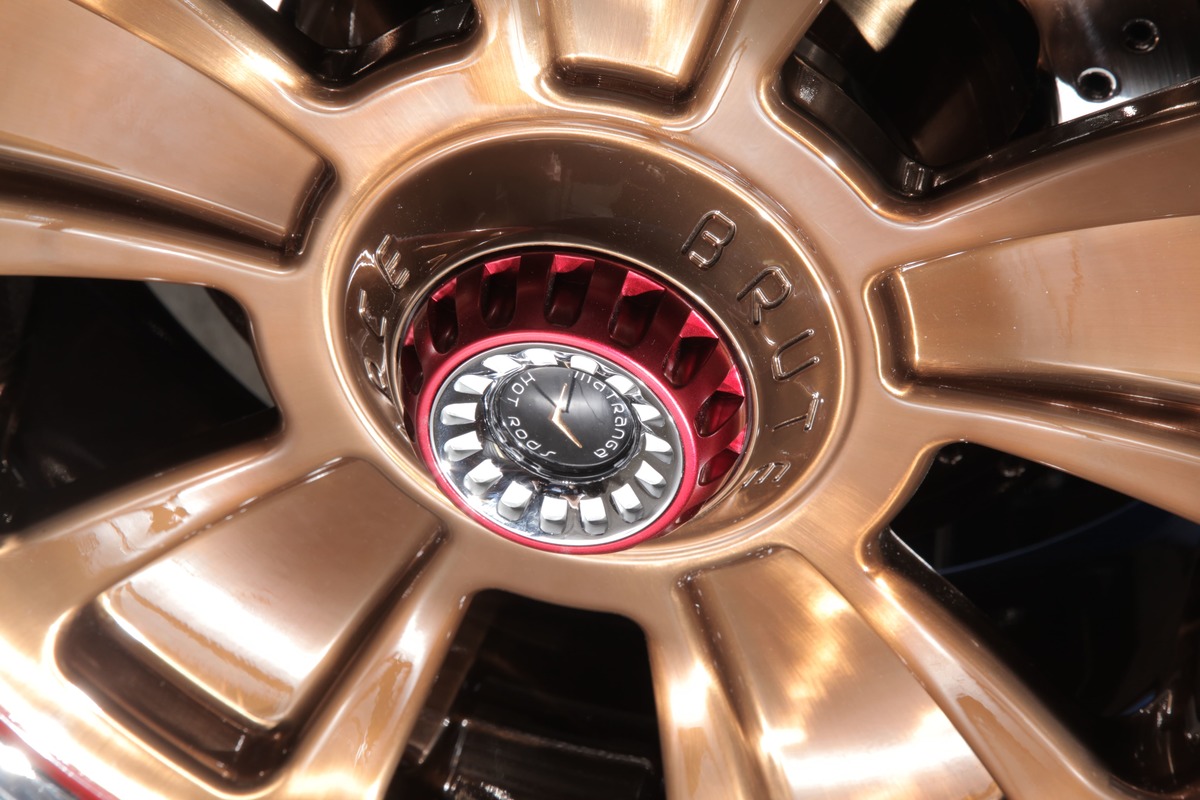 The Brown-designed one-piece wheels (18×7 and 20×10) were machined by EVOD Industries and there are five locating pins for each wheel as well as a finned aluminum rotor hat (with the fins fitting into notches on the wheel hub). A center locking cap threads inside the rotor hub to provide a lock-tight fit and Pirelli P Zero tires (215/40ZR18 and 295/40ZR20) were shaved of obligatory info, except for the Pirelli logo itself. 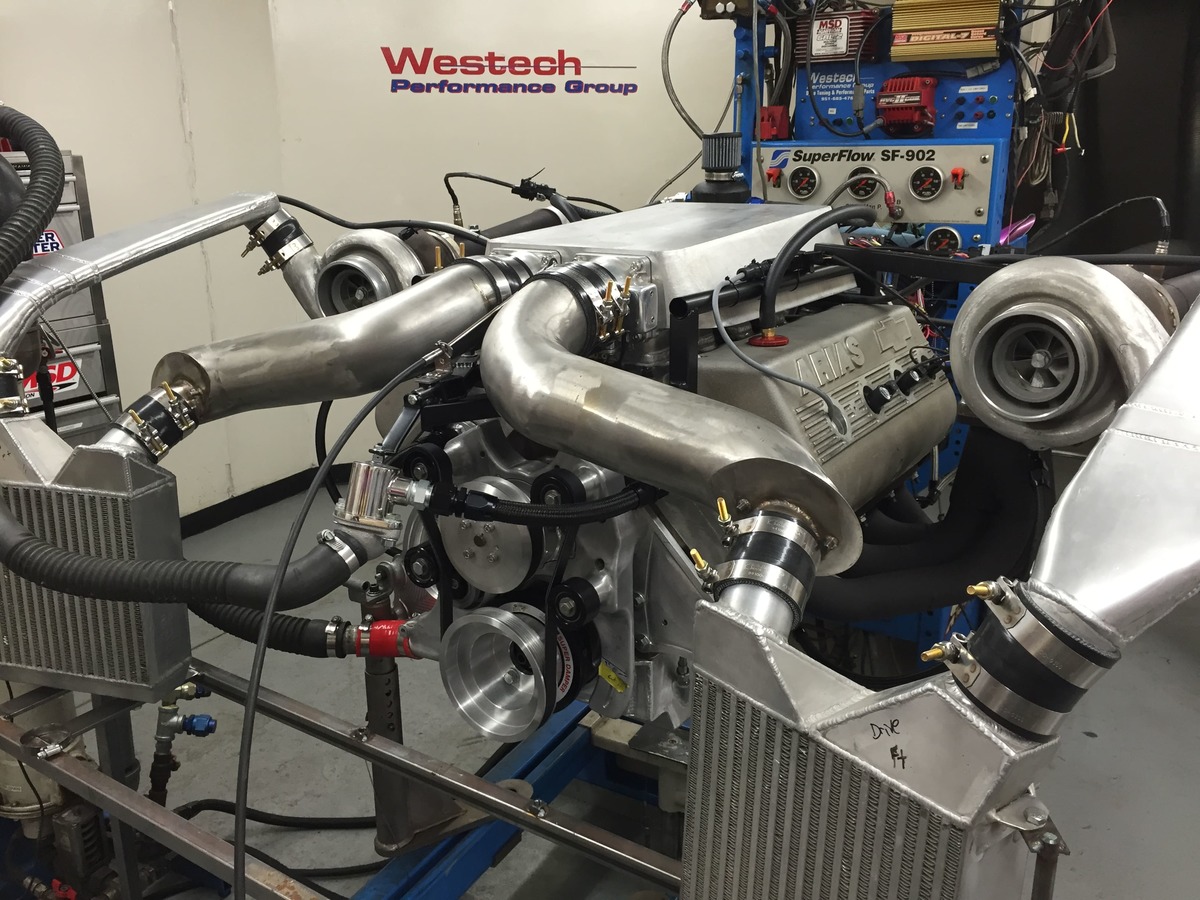 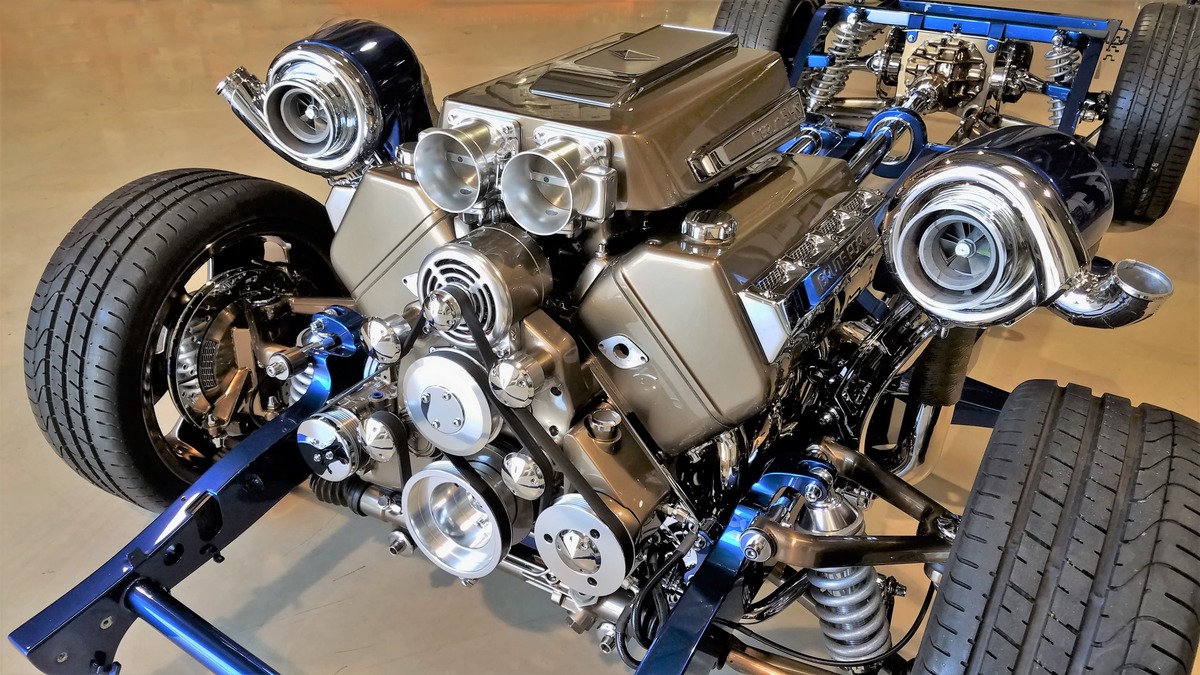 The powertrain started with a 540-inch Merlin block (assembled at Mitech Racing Engines by Mike LeFever) producing 800 usable horsepower, though 1,400 hp is attainable by adding more boost. Hogan Racing Manifolds made a one-off intake manifold for the Arias hemi heads, and Matranga’s Paul Hattrup machined the valve covers clean of their fins. 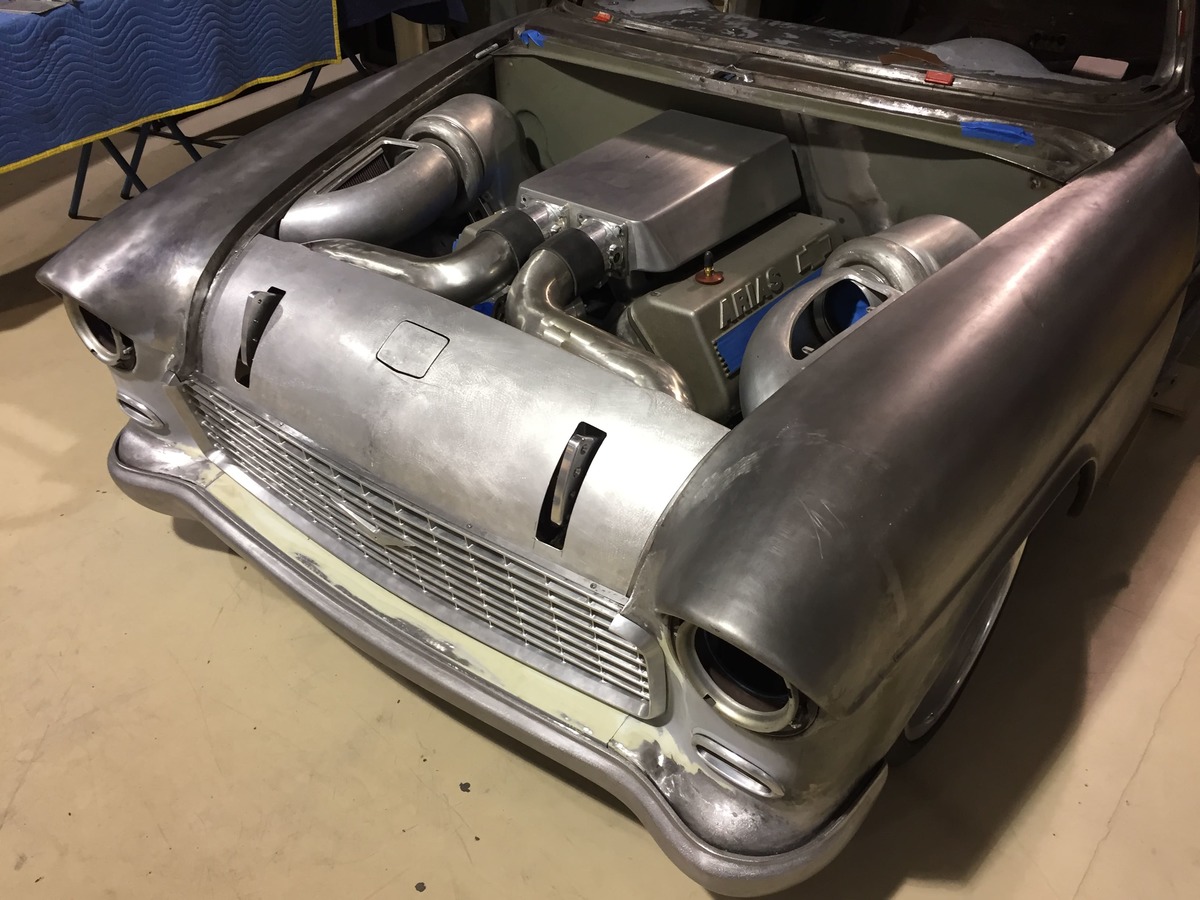 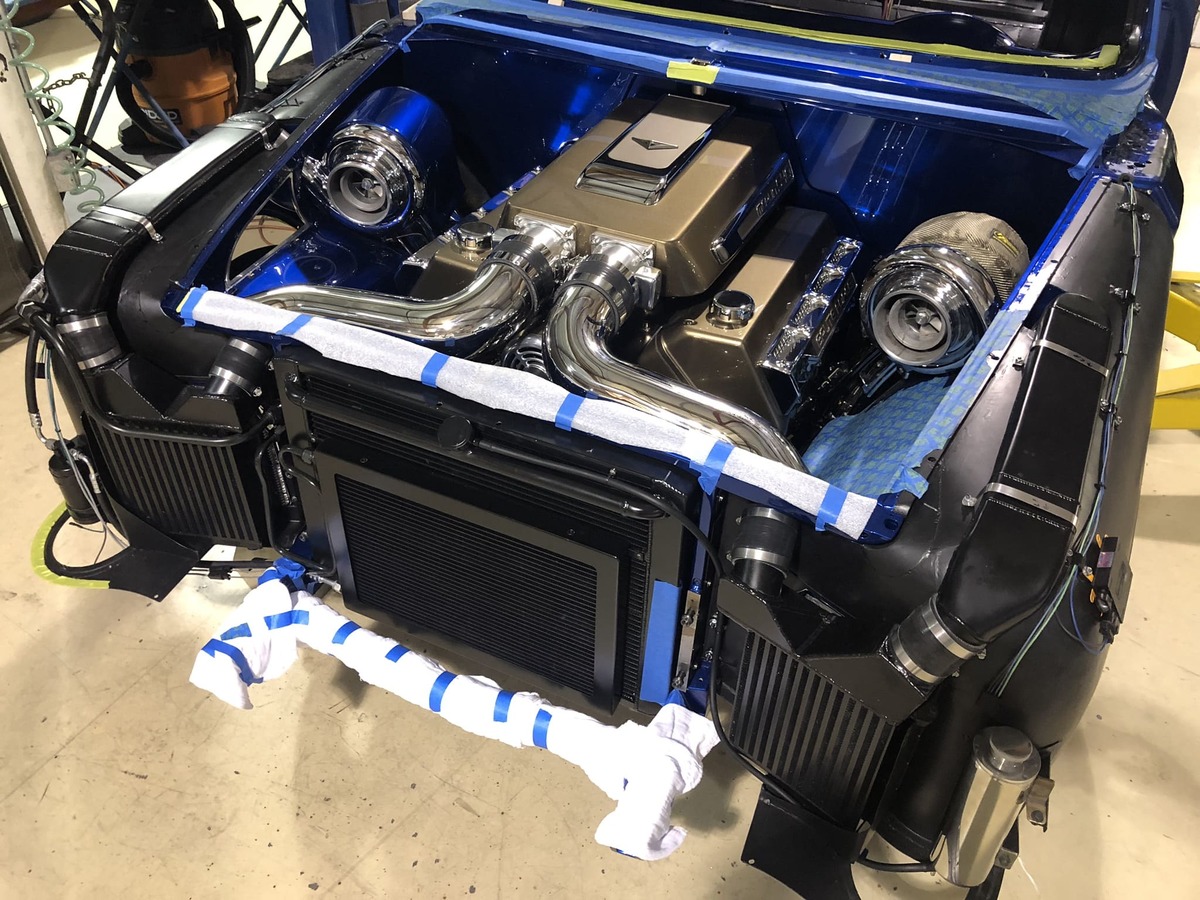 The MSD alternator was fitted with a one-off aluminum case and Ryan Rivers fabbed a unique two-into-one aluminum upper radiator tubing for the three-pass Mattson radiator. The water pump housing was custom made by CMAG Enterprises, and the power steering pump is hidden inside its reservoir. 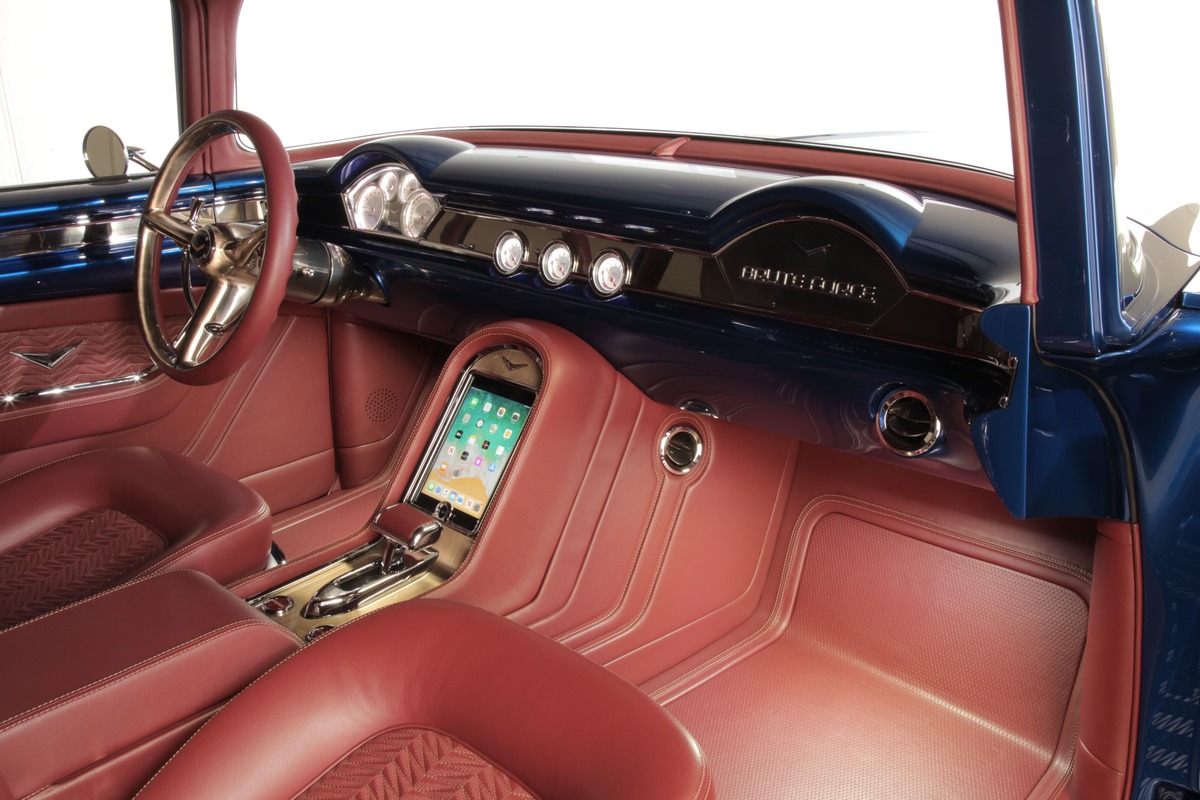 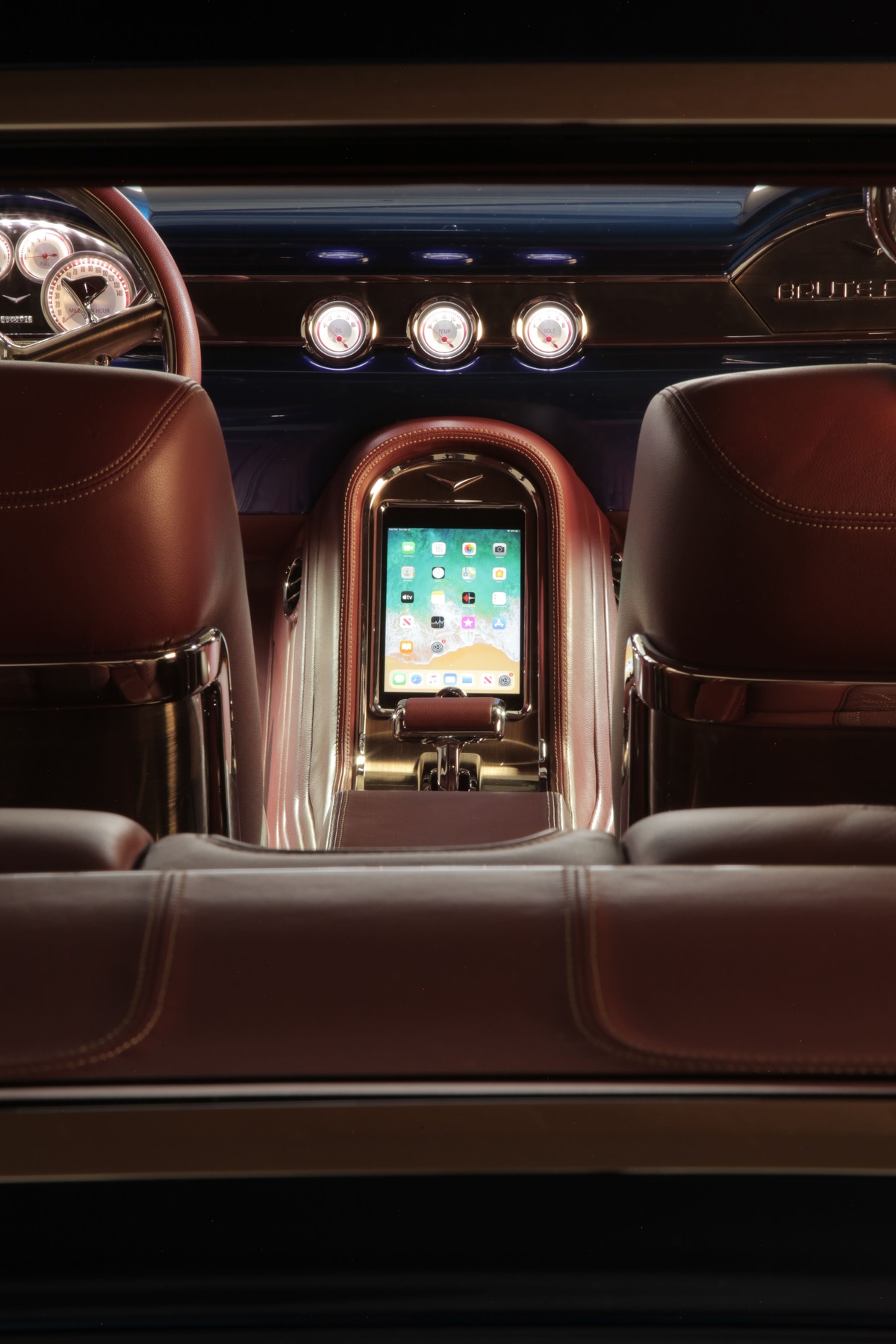 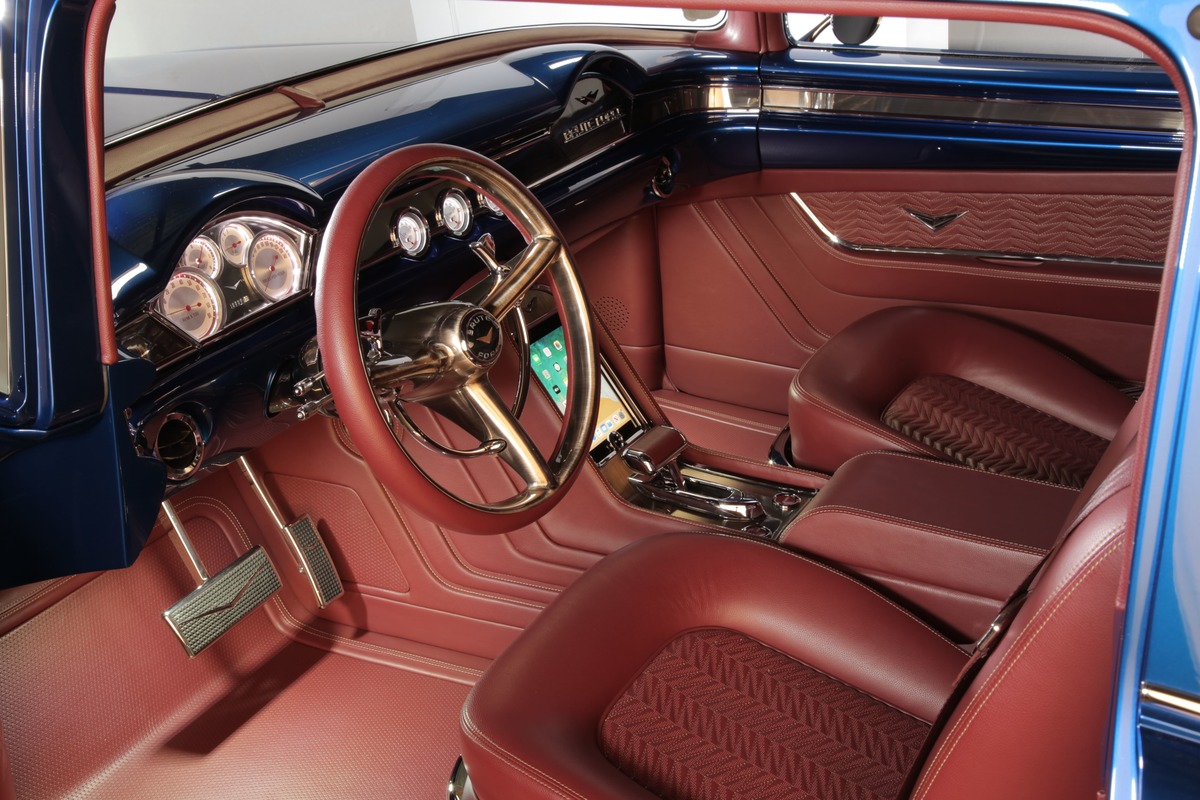 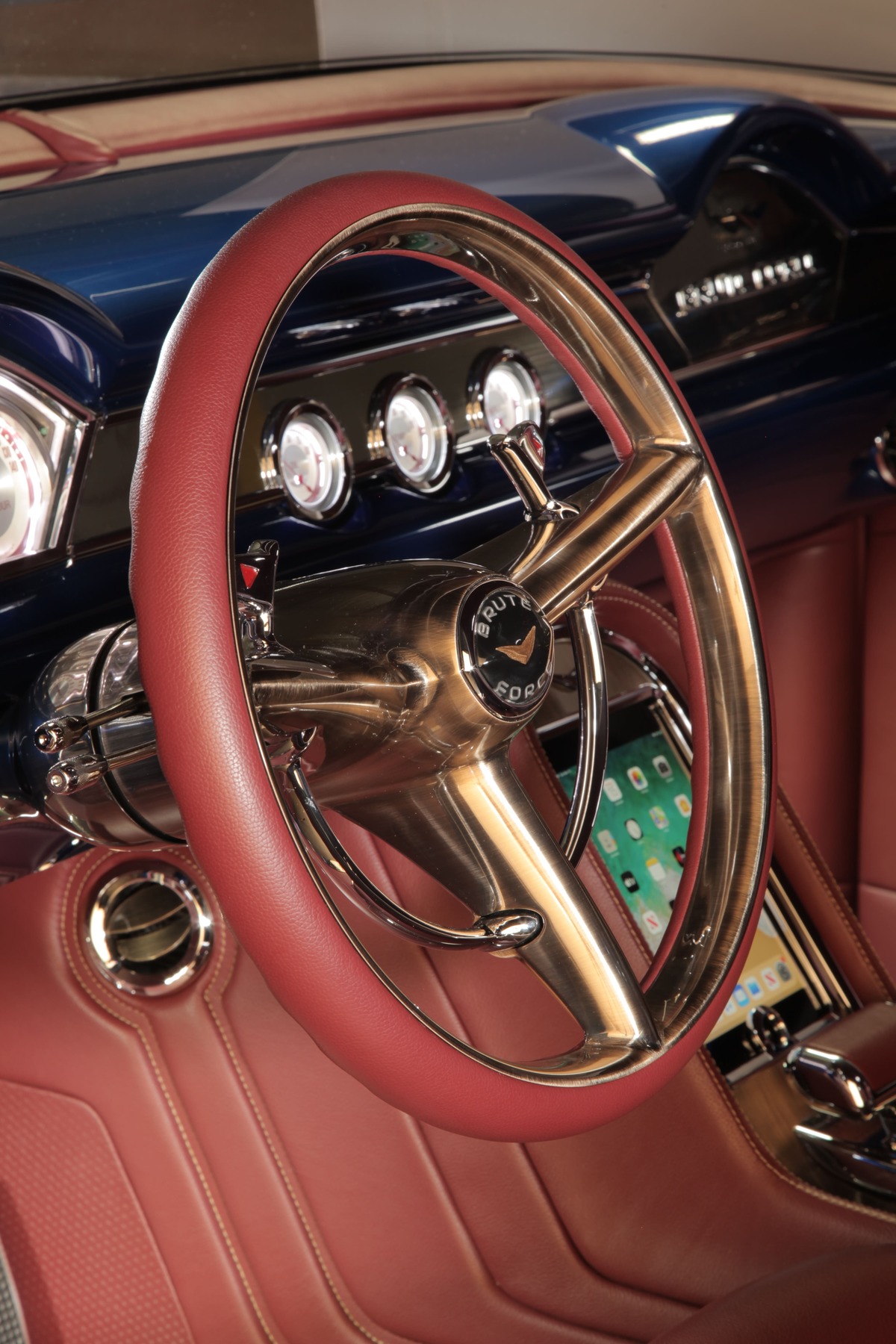 Up top twin Garrett turbochargers (with Cerakote-coated turbine housings and chrome-plated compressor covers) feed the beast, and the custom exhaust is a set of stainless headers and an exquisite set of handmade stainless-steel mufflers created by Ryan Rivers. As the exhaust routes through openings in the frame’s crossmembers, one-piece polished stainless trim rings were fitted to the frame holes so the heat won’t scorch the paint. The V-8 mates to a 4L80E transmission.

But as complicated and intricate as the chassis and drivetrain is, the Brute Force body is in a class by itself. The front fenders were handmade and the headlight and bumper section of the fender is noticeably lower when compared to a factory Bel Air’s profile, which helps give the appearance of a lower vehicle. The rear wheel openings were reshaped to complement today’s larger wheel dimensions, and the slightest 3/4-inch chop was performed on the roof.

The roofline also looks lower as the driprail was removed and a lip put its place, and the “sweetheart” dip found at the middle of each quarter-panel (under the quarter-windows) was removed and placed on the opposite side of the car, allowing  the swept-forward side trim piece to also be reversed and sweep back. Also, the exterior’s side reveal now flows from the headlight and into the door.

Many places on the car appear as one thing but are actually something else. The front fender’s inner wheelwell area is not the bottom side of the fender, made with a gap large enough between both of them to house the 24-inch-long ductwork for the intercoolers. If you look under the car at the floor, it’s actually a second skin made to ensure an absolutely smooth surface (plus between the skins is where they hid the car’s plumbing, and it’s all insulated with Dynamat material).

Lil’ Louie is responsible for making the brass side trim pieces (chromed by QCP Enterprises in Whittier, California), while Rick LeFever helped create the one-piece windshield and rear window trim, which was hand-sanded to a peak by Bill Brakman before being chromed.

A new aluminum hood was fabbed and made to open in reverse, and the grille opening was 3-D scanned by the SEMA Garage to provide Brown the CAD info he needed to design a new grille; a 24-pound egg crate (with twin-axis curvatures) milled by EVOD Industries from a 243-pound block of billet aluminum.

The SEMA Garage also scanned the headlight bezels for milling, as well as the taillight openings, to which Brown was able to accurately design a set of taillight housings featuring a 3-D–printed back cover and baseplate, which holds the LED lights along with a set of scratch-built red lenses by AM Hot Rod Glass. 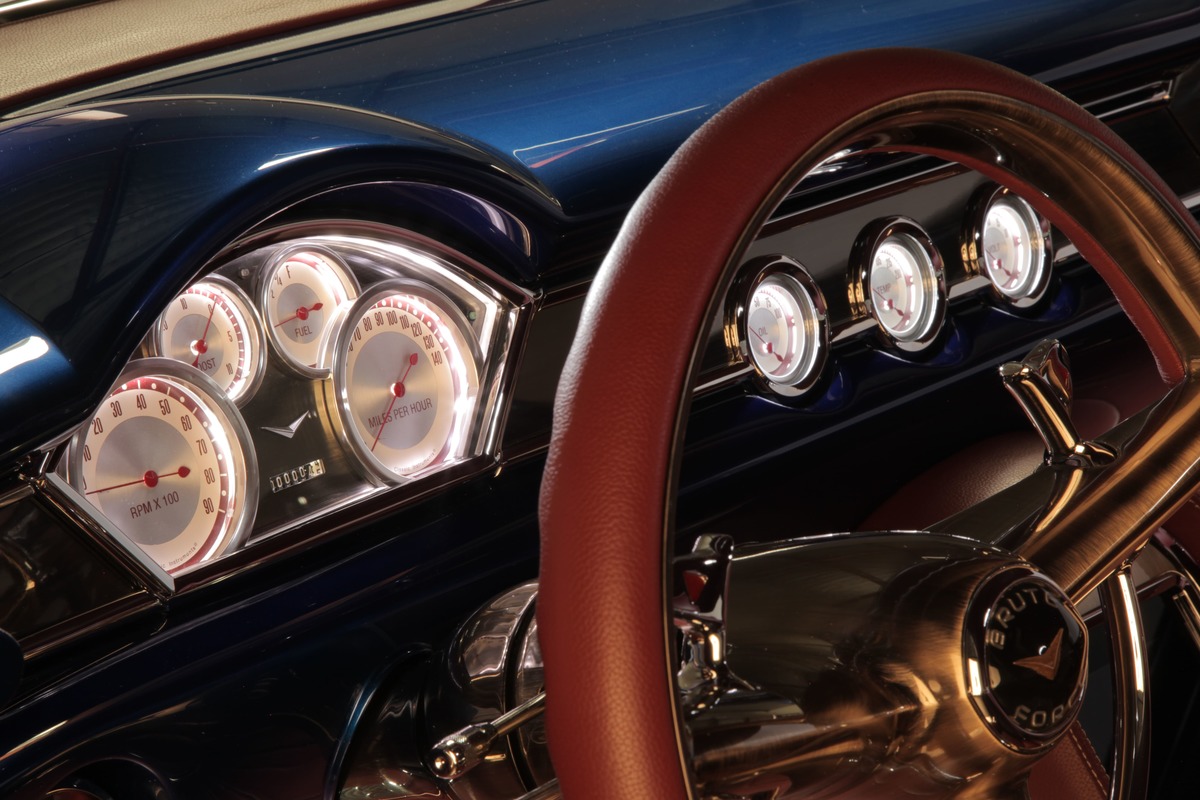 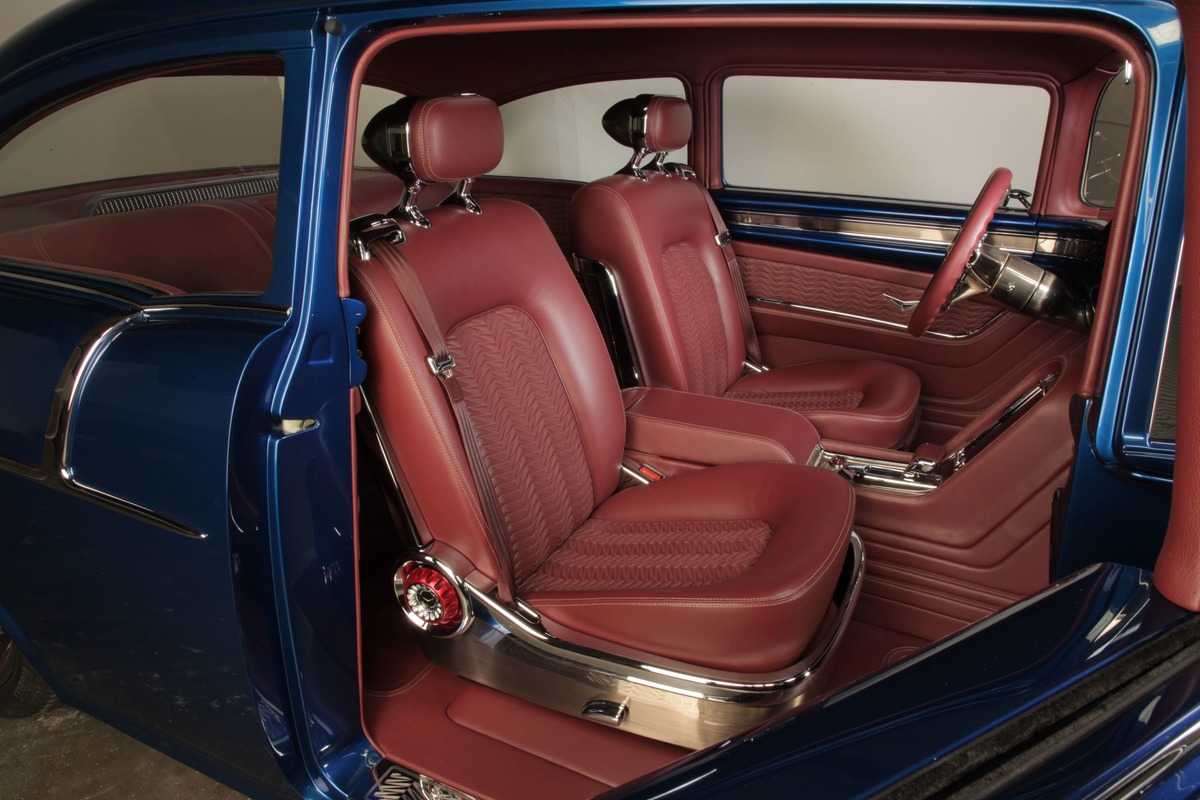 Marcel’s Custom Metal performed the work on the 1955-type dash, which connects the dash with the door tops, and Bennett Engineering made the car’s console trim. Seven Classic Instruments gauges (four in the instrument panel and three across the dash) inform Bob as to what’s going on with his ride.

The two crowning achievements of the interior have to be the seats and the steering wheel. For the seats (originally from a Chrysler Sebring convertible), more than 80 new parts were milled or 3-D printed, with the headrest buckets fabbed from aluminum by Ryan Rivers.

The steering wheel is one of the most interesting advancements in hot rodding we’ve ever seen. Essentially a combination of a ’50s horn-ring design and contemporary leather-wrapped billet finger-grip ring, its internals are what set it apart. A CompuShift transmitter is on the back of the wheel and microswitches are wired to the horn ring, which really does operate the horn and doubles as a paddle-shift mechanism for the trans. Each paddle shares pivot points on the same axis as the horn ring, yet all move independently of each other. To add a bit of elegance, upholstery guru (and inductee into the Grand National Roadster Show’s Hall of Fame) Gabe Lopez wrapped the steering wheel in seamless leather.

Bob and Brown worked for months with both Tony Correia and paint manufacturer PPG in getting the right blue hue for Brute Force. They came up with what is simply called “Brute Force Blue.” After Juan Carillo and Jose “Pancho” Contreras from Mick’s Paint spent months doing the necessary bodywork to make the body perfectly straight, Carillo covered the car with its now-signature color. 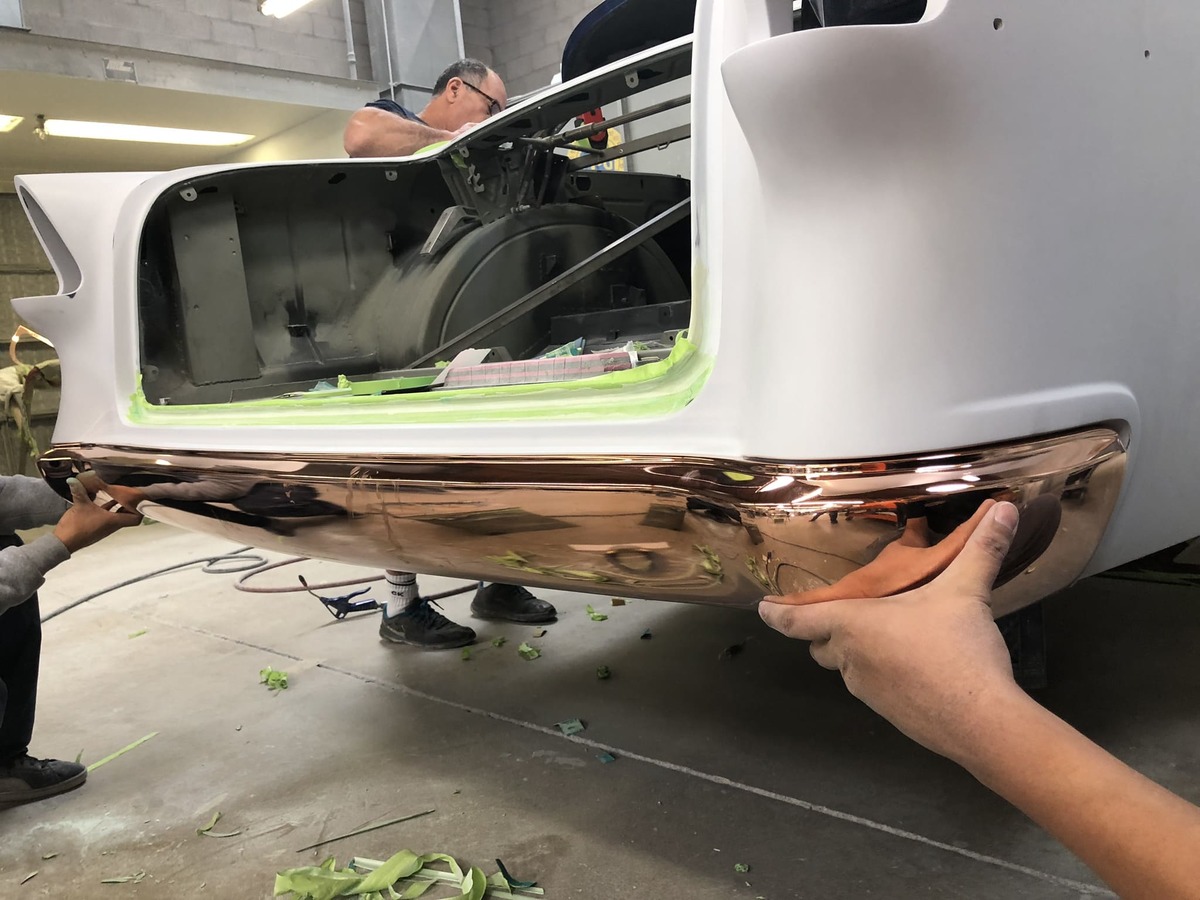 Many parts on the car are finished in chrome or in unobtanium bronze (a color and finish Brown came up with), but there’s also texture in the design. The wheels had a very slight grain running in a concentric direction off the hub. But if you look into the windows of the wheel, you’ll see that the grain runs 90 degrees to that, radiating outward from the hub. QCP Enterprises did the car’s chrome, unobtanium, and antique bronze finishes while Custom Metal Finishing did the custom burgundy, black, and bright dip anodized finishes on the car.

With the color applied, the Chevy rolled into Gabe’s Custom Interiors where Lopez has been doing award-winning interiors since back in the mid ’90s for Boyd Coddington, and he and his sons are still the go-to stitchers for anyone who wants a high-end upholstery job. 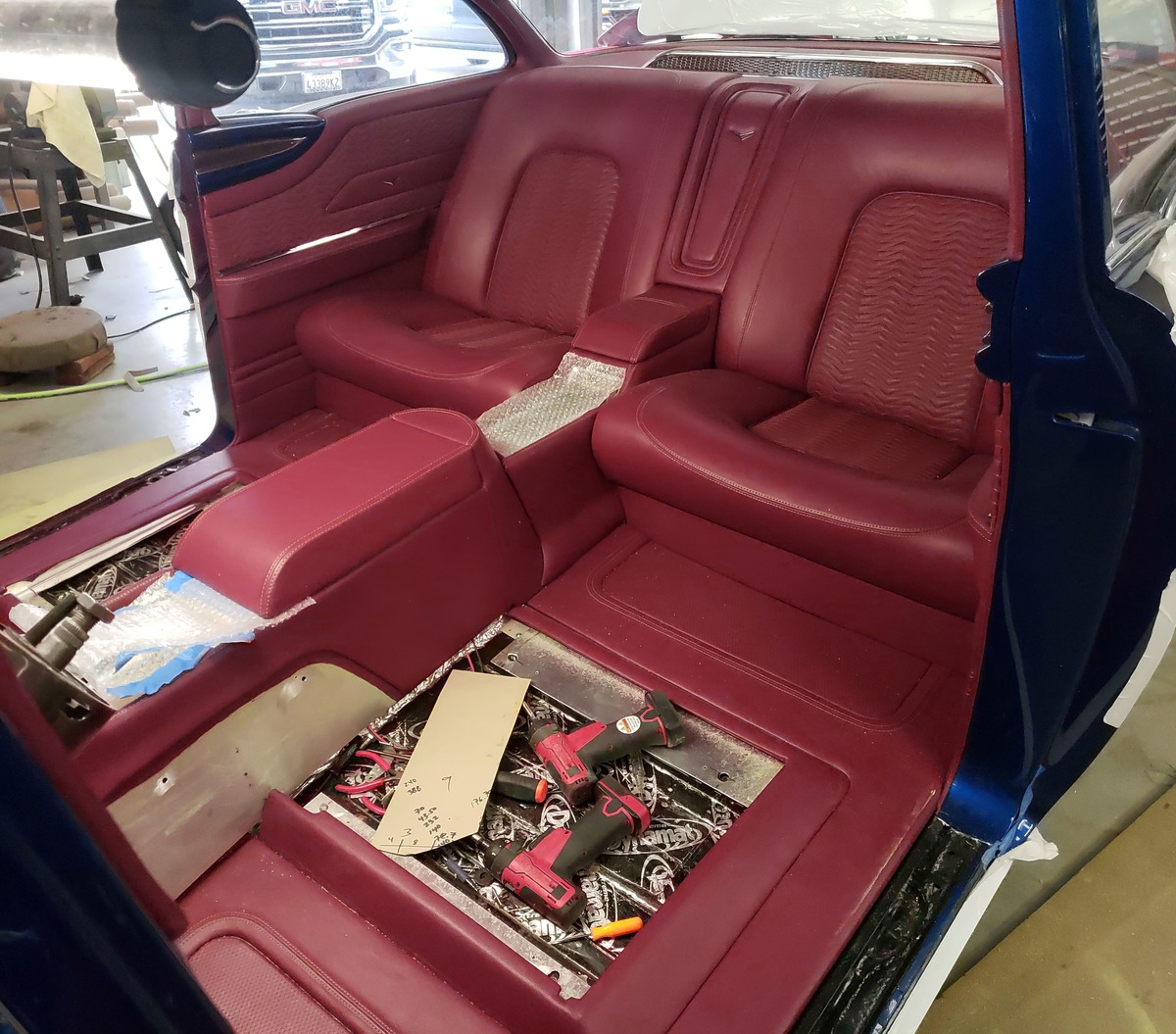 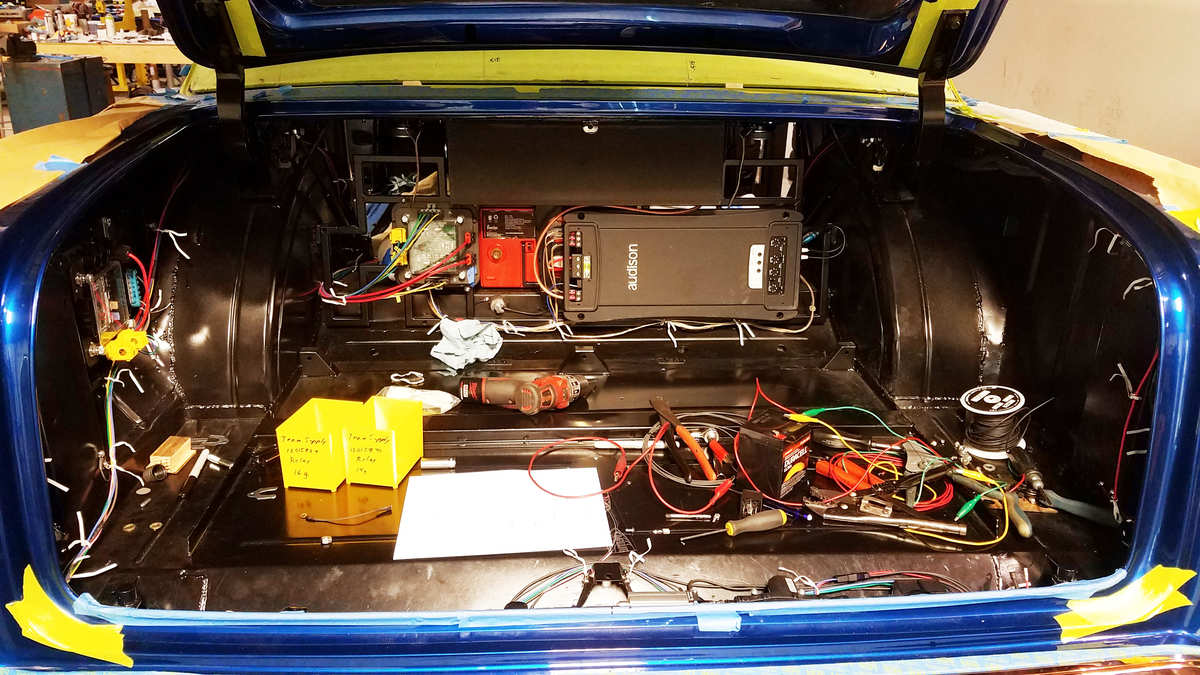 As Bob says: “This is something special; this is something not too many people take on and do. It’s not the ordinary, it’s the extreme to build something like what we wanted to build. A Ridler car is a car that has to be handmade to perfection. You sit back and design parts, machine parts, bend metal, you make bolts. You don’t have parts that are stamped; you’re taking a flat piece of metal and creating a fender, and you’re doing that throughout the whole car. We were trying to create a piece of art. It’s no longer just something that came off an assembly line. It’s something that you put your heart and soul into to create and build. There isn’t one part of a Ridler contender that is the most challenging. At this level, every part is the most challenging part. If it isn’t, then you’re doing it wrong.”

While Brute Force didn’t win this year’s Ridler, there can be no denying it’s a “force” to be reckoned with and clearly excels in many aspects of its build. We would like to see it in competition elsewhere, as we believe it’s a winner.

Our hats are off to Bob Matranga and the Brute Force crew for stepping up and going the extra distance to build arguably the finest Tri-Five to come down the road in a long time. MR