What You Need To Know About  Alternators and Batteries 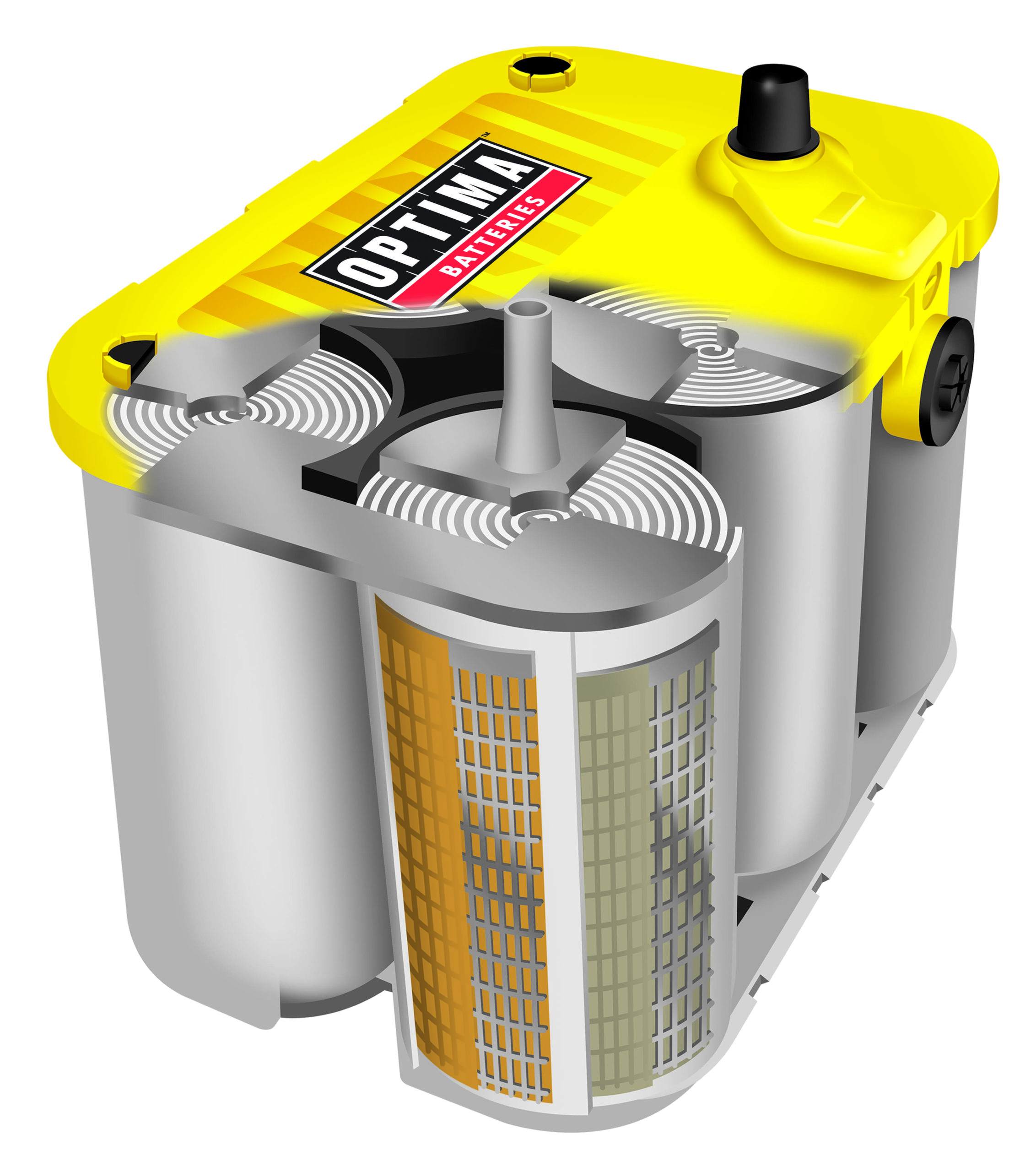 Rather than the flat plates found in most batteries, Optima’s use six spiral-wound cells composed of two pure (99.99%) lead plates coated with a precise coating of lead oxide. 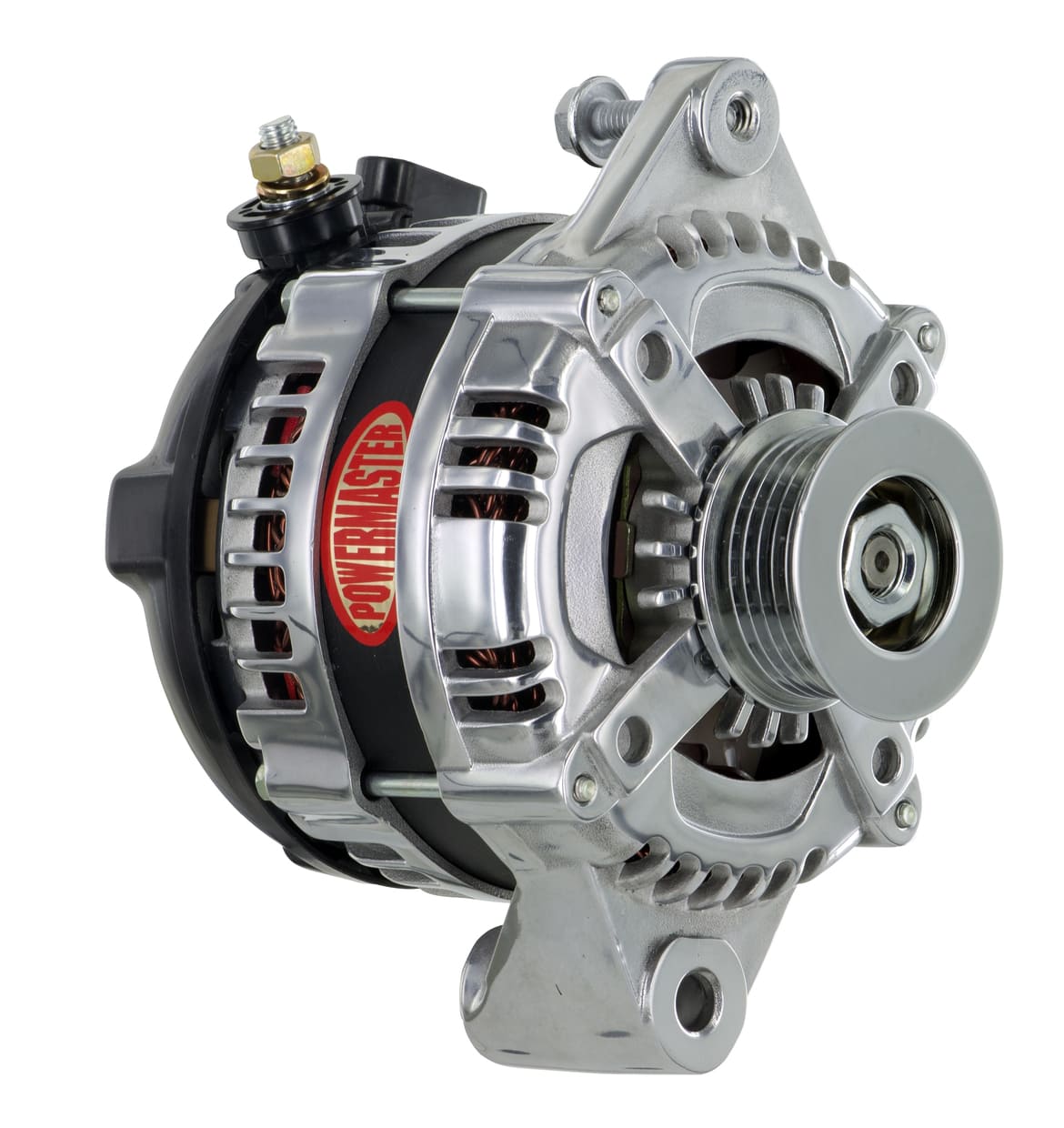 By Ron Ceridono – Photos Courtesy of Powermaster and Optima

If you’re like most of us who are into classic trucks about the only time you think about the alternator in your ride is if the lights go out and the engine quits in the middle of nowhere. Batteries are often ignored as well. As long as the engine fires when you’re ready to hit the road there’s nothing to think or worry about. But, when you hit the starter and there’s nothing more than a click from under the hood that plastic box that’s supposed to be full of volts but isn’t will suddenly become a concern. 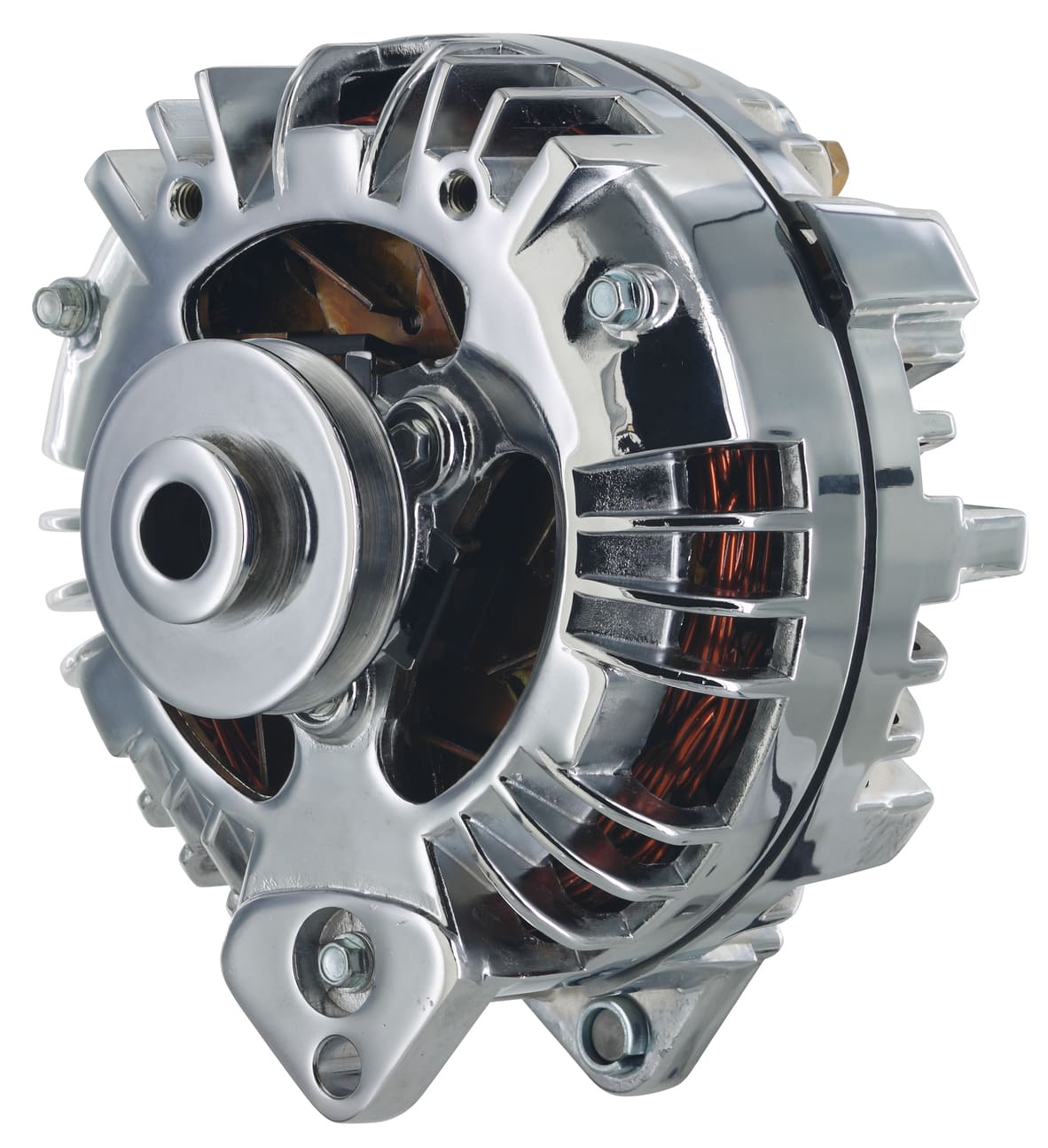 One of the of the best methods to prevent problems with alternators and batteries is to choose them based on the demands they will be subjected to. The first question that is usually asked when selecting an alternator is “How much output is necessary?” Unfortunately the answer is a not very specific,  “It depends.” The key to making picking the right alternator is to know how many amps the electrical system requires. This can be figured two different ways. The easiest way is to add the total amp requirements of all components together. Generally all electrical items will have their supply demands included with the instructions and we’ve included a list with some general guidelines.

Another method to determine electrical system demands is with the use of a high capacity ammeter that clamps around the positive battery cable. With all the electrical loads turned on at the same time, the amperage demands can be measured. But regardless of how the system’s requirements are determined a safety factor should be included in the selection process. A good rule of thumb to prevent overheating and ensure longevity of the alternator is not to exceed 80% of its rated output. 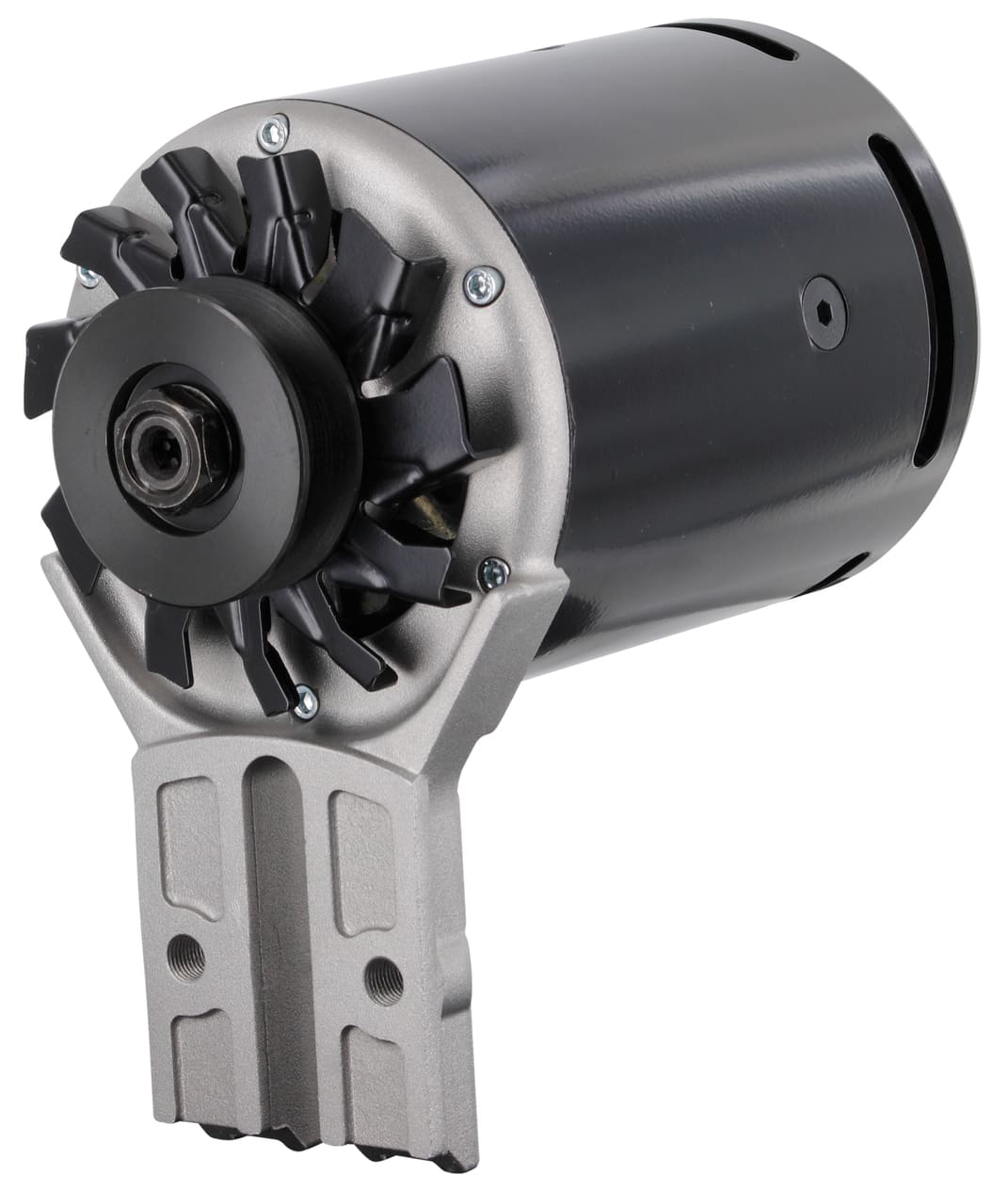 While alternators are often rated by their maximum amperage output this can be deceiving as their output follows a curve related to engine speed. In operation an alternator’s output at idle is critical when engine cooling fans, climate control systems and other large draws are part of the system. To make the selection process easier, Powermaster publishes alternator output at idle, cruise and top end engine speeds. To ensure the electrical energy required is always available Powermaster has a complete line of high output alternators, including their new HPR small frame designs that put out 145 plus amps at idle, 165 at cruise and 175 on the top end. Keep in mind, it’s better to have more output than necessary as opposed to not enough as the voltage regulator controls the alternator so it will only produce the electricity the system requires.

A critical, and often overlooked part of the charging system is the alternator’s output wire. For safety and proper charging system operation it’s important that the charge wire is sized appropriately for its length and the alternator’s output. Too small a wire will result in excessive resistance, which can create enough heat to cause the wire to burn. 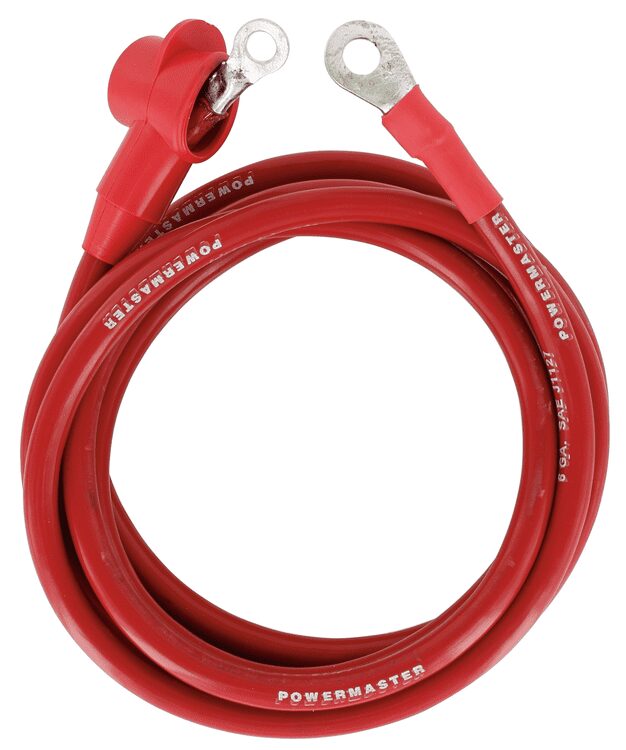 Another requirement for proper alternator operation is a good ground. Powermaster cautions that many mounting brackets are powder/clear coated, painted, or plated and as a result the alternator will not ground properly without a dedicated ground wire from the alternator housing to the engine block.

Automotive batteries have one thing in common, they use a combination of lead and acid to produce a little over two volts per cell (as a result 6-volt batteries have three cells, 12-volts have six). The cells are made up of lead plates and electrolyte solution which together  causes a chemical reaction that releases  electrons that  to flow through conductors to produce electricity. As the battery discharges, the electrolyte reacts with the  plates changing the composition of their surface. When the battery is recharged, the chemical reaction is reversed restoring the  plates restored to their original condition and the process is repeated.

Although they produce electricity in a similar manner, there are  three different configurations of lead acid batteries—wet cell, gel cell and absorbed glass mat (AGM).

GEL: Often confused with AGM batteries, GEL batteries use an additive in the electrolyte that stiffens it creating a gel. In most cases these batteries are very sensitive to overcharging and premature failure may result.

AGM (Absorbed Glass Mat): These are unique in that the electrolyte is suspended in an absorbent fiberglass material eliminating the need to flood the battery with liquid. This design makes AGM batteries spill-proof and vibration-resistant with the added advantage that they can be mounted in almost any position (however upside down is not usually recommended).

Within the two types of batteries Optima offers three distinct versions; each is identifiable by the color of the top and case.

Red Top: These are designed for engine starting where an alternator immediately monitors the state of charge and provides energy to the battery whenever it is needed. For a vehicle with average electrical demands and a properly working alternator, the Optima Red Top starting battery is the appropriate choice.

Yellow Top: Considered a deep-cycle battery, this is the one to use when electrical loads are higher than average, or when the discharge cycle is more than typical engine starting requirements. If the vehicle is stored for long periods of time (particularly with an alarm system engaged) an Optima yellow top should be used as the amperage drain over several weeks would damage a Red Top and reduce its life.

Blue Top: These can be also be used for both starting and deep cycling. The difference between Blue Top and Yellow Top deep cycle batteries is that they have both automotive (SAE) posts and threaded posts, while Yellow Tops only have SAE posts.

To keep identification simple, when it comes to Optima batteries if it has a dark gray case then it’s a starting battery; if it has a light gray case it’s a deep cycle (dual purpose) battery. 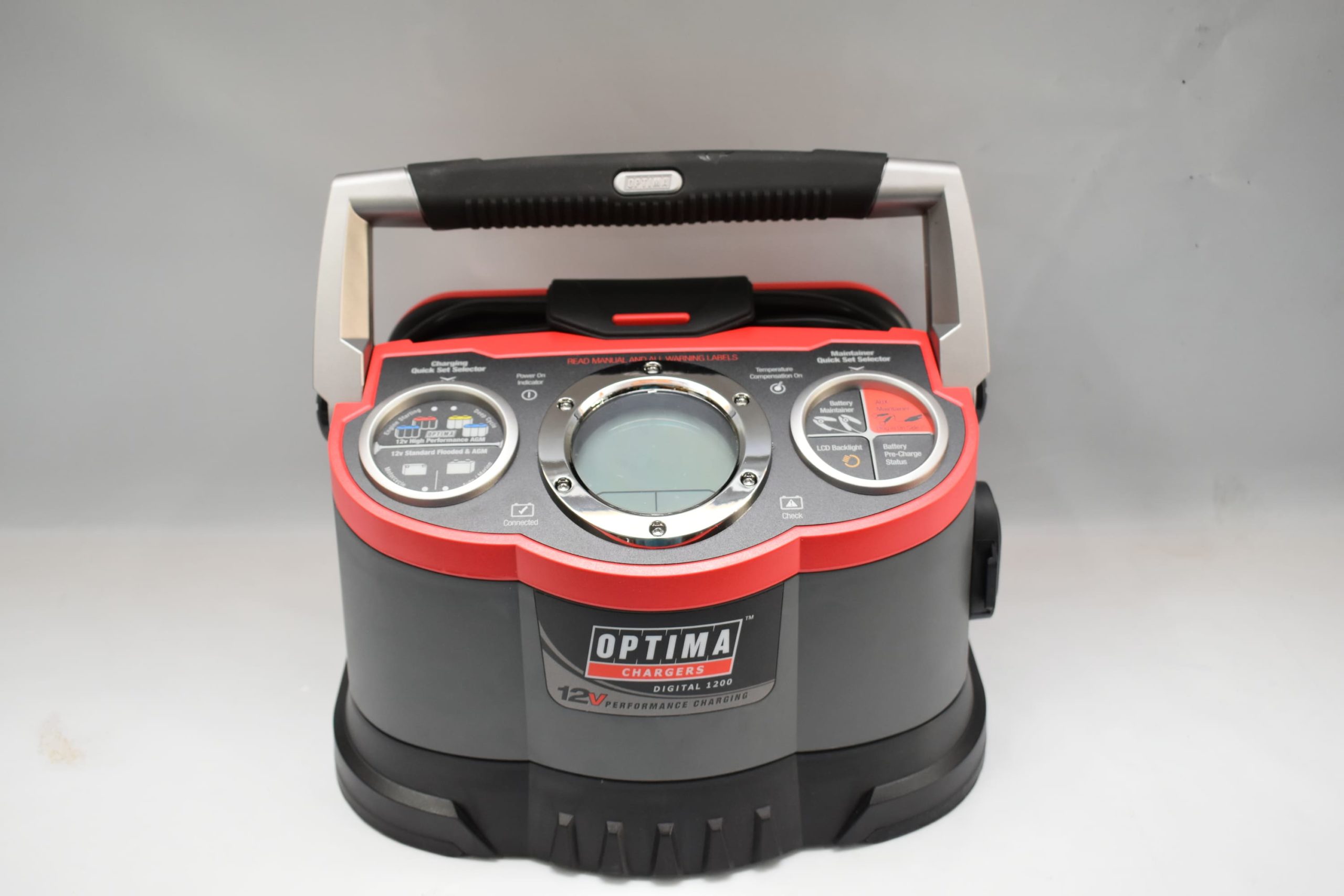 Something to be aware of with Optima batteries is that some battery chargers may not work with them. Basically these batteries have such low internal resistance that many chargers react as though the battery has an “open circuit” and simply won’t work (which may be the case with any battery that drops below 10.5 volts).

If you’ve ever jumped into your truck after its been parked for a while only to find the battery dead, you understand the necessity of keeping the battery “hot.” One of the best methods to do that is the use of a battery maintainer to keep it at full capacity during storage.

Sooner or later you’ll have to remove or replace a battery and like everything else there’s a right and wrong way to do it. Batteries may pose a hazard due to the hydrogen gas that may be present during and after charging that can be ignited by a spark. For that reason when a battery is removed always disconnect the ground cable first—if the wrench hits ground there won’t be a spark because the battery is already grounded. With the ground removed if the wrench hits metal while removing the positive cable there won’t be a spark because there isn’t a complete circuit with the ground removed.

At some point it may be necessary to use jumper cables for yourself or a friend and there’s a right and wrong way to do that too.

When connecting jumpers connect the first connect the positive cable on both batteries. Connect the second cable to the negative on the good battery, and then make the final connection away from the dead battery on a good metal ground. By doing this any spark created will be away from the battery and any explosive hydrogen fumes.

It’s been said you can’t have too much of a good thing, when it comes to alternators and batteries that’s certainly true. Choose wisely and you can eliminate any current concerns you may have.