Ford For All Time 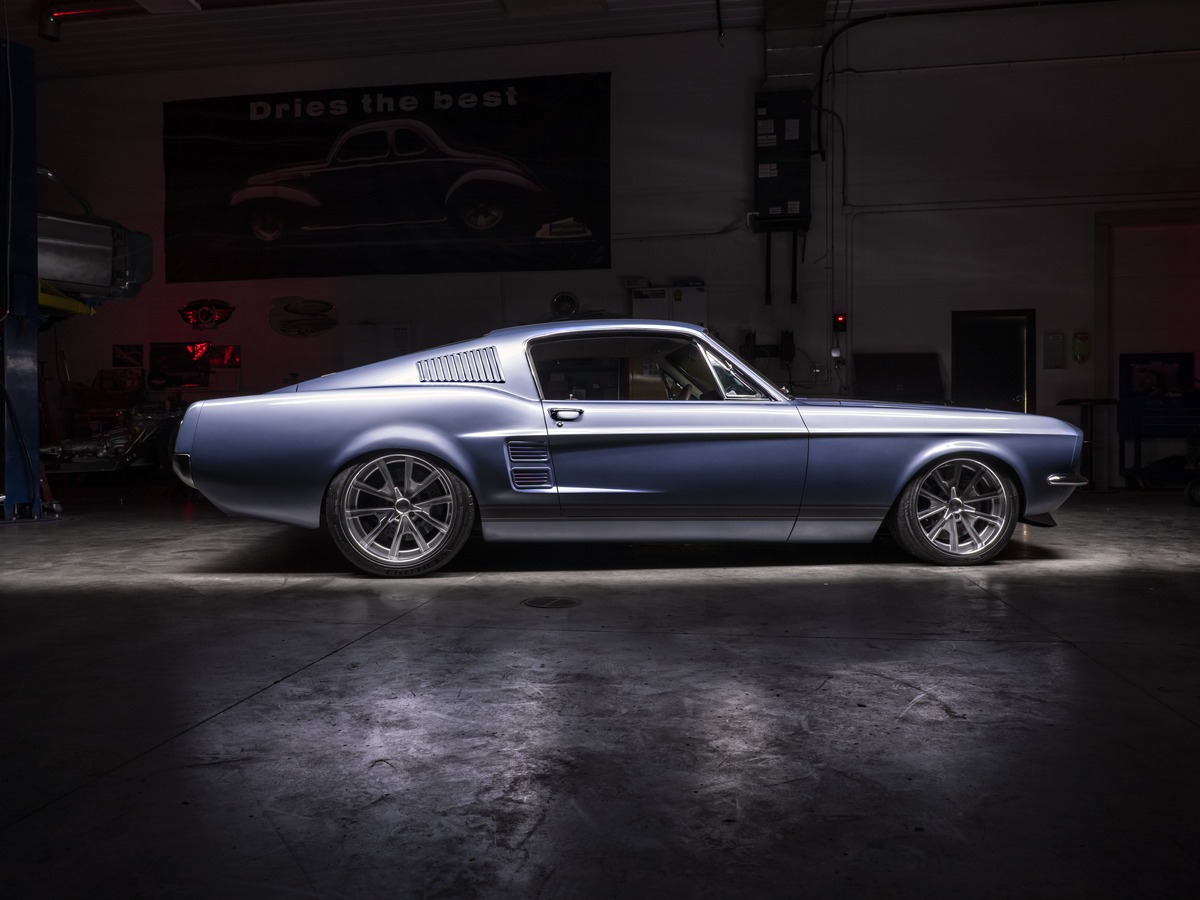 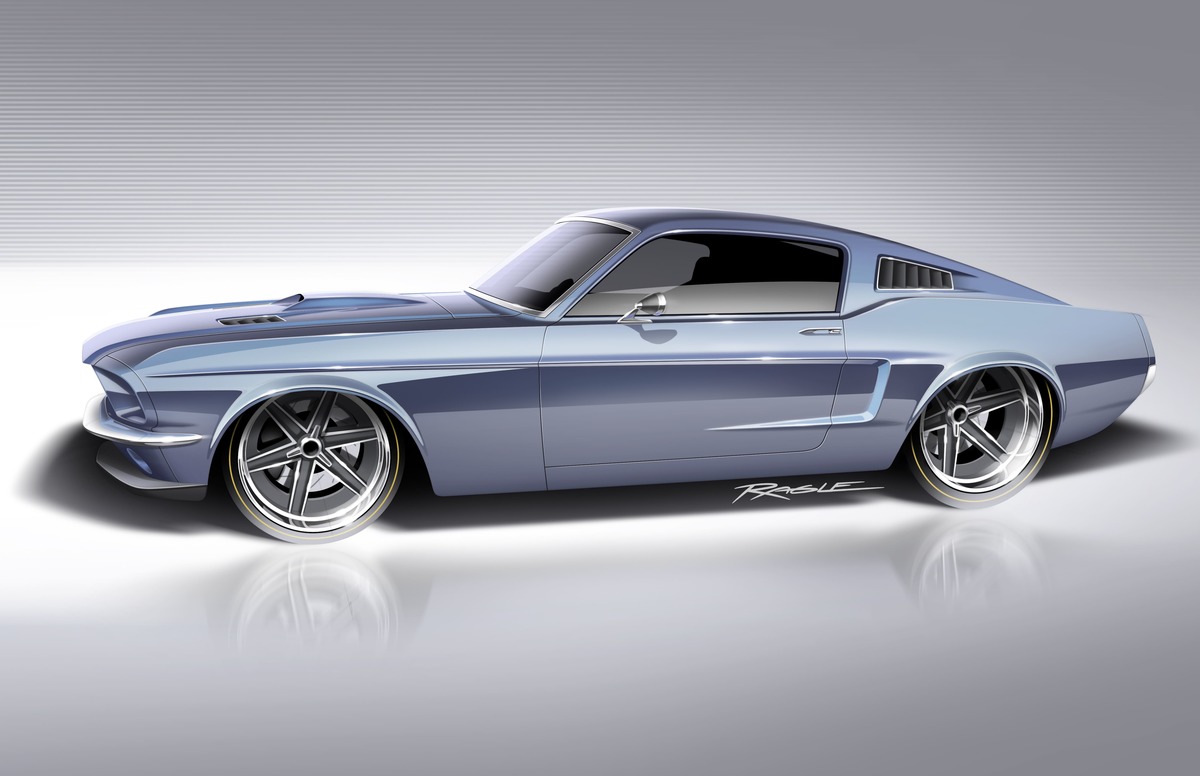 The Ford Mustang is an iconic brand. When it comes to the “leader board” there’s no denying the Steve McQueen “Bullitt” 1968 Mustang GT fastback comes in as an indisputable #1. Next on our list, and following closely, is the John Wick 1969 Boss 429 (yes, we know it’s not the real deal but hey!). These two get our votes as all-time favorite Fords and all-brands movie cars. 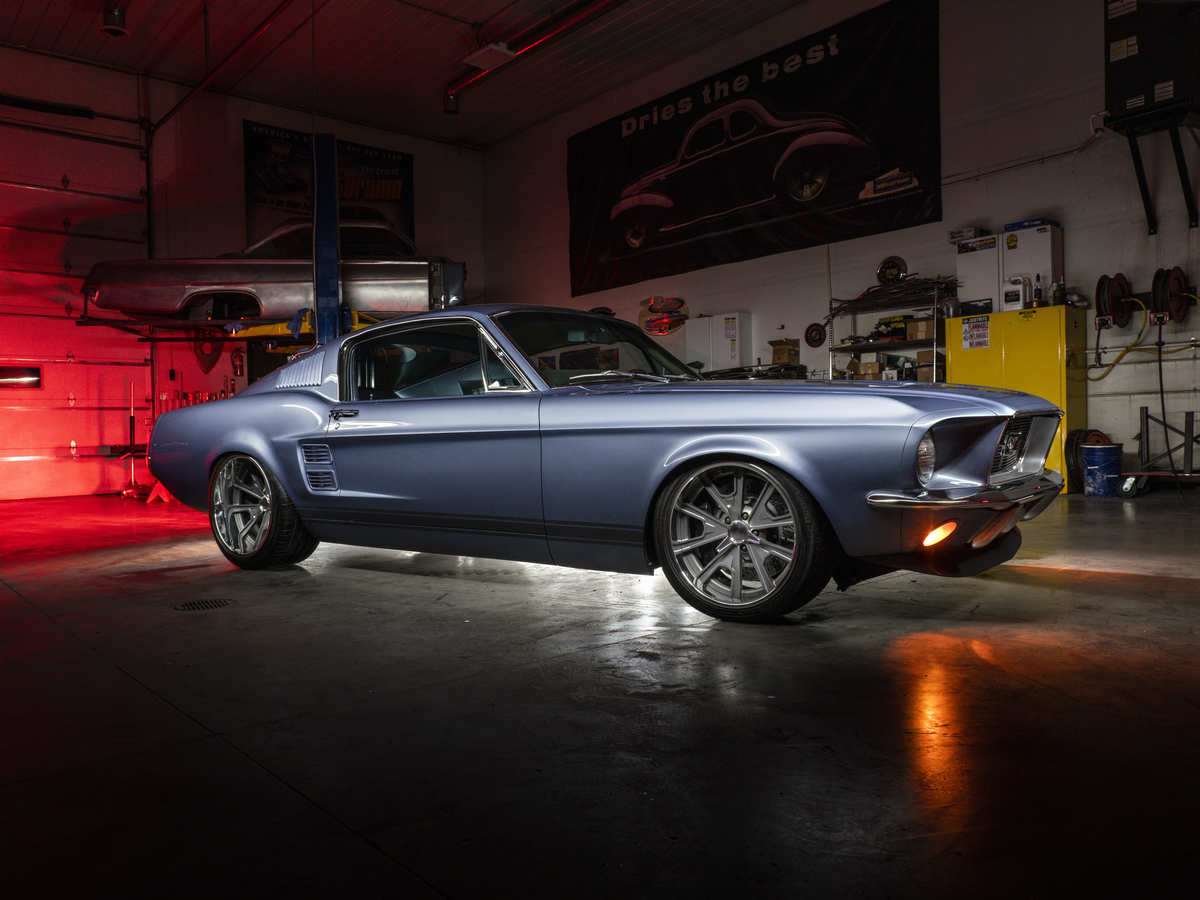 From here the list becomes crowded and personal opinions takeover. There are any number of famous ’Stangs but among us mere mortals we have our lists. Residing particularly close to the top of the list is the Florida-based, Coyote-powered 1968 Ford Mustang fastback belonging to Yaniv Sananes. This potent Pony was built under the watchful eye and guiding hands of Andy Leach of Cal Automotive Creations housed in Bennington, Nebraska, including heaps of inspiration from the artwork by Gary Ragle. 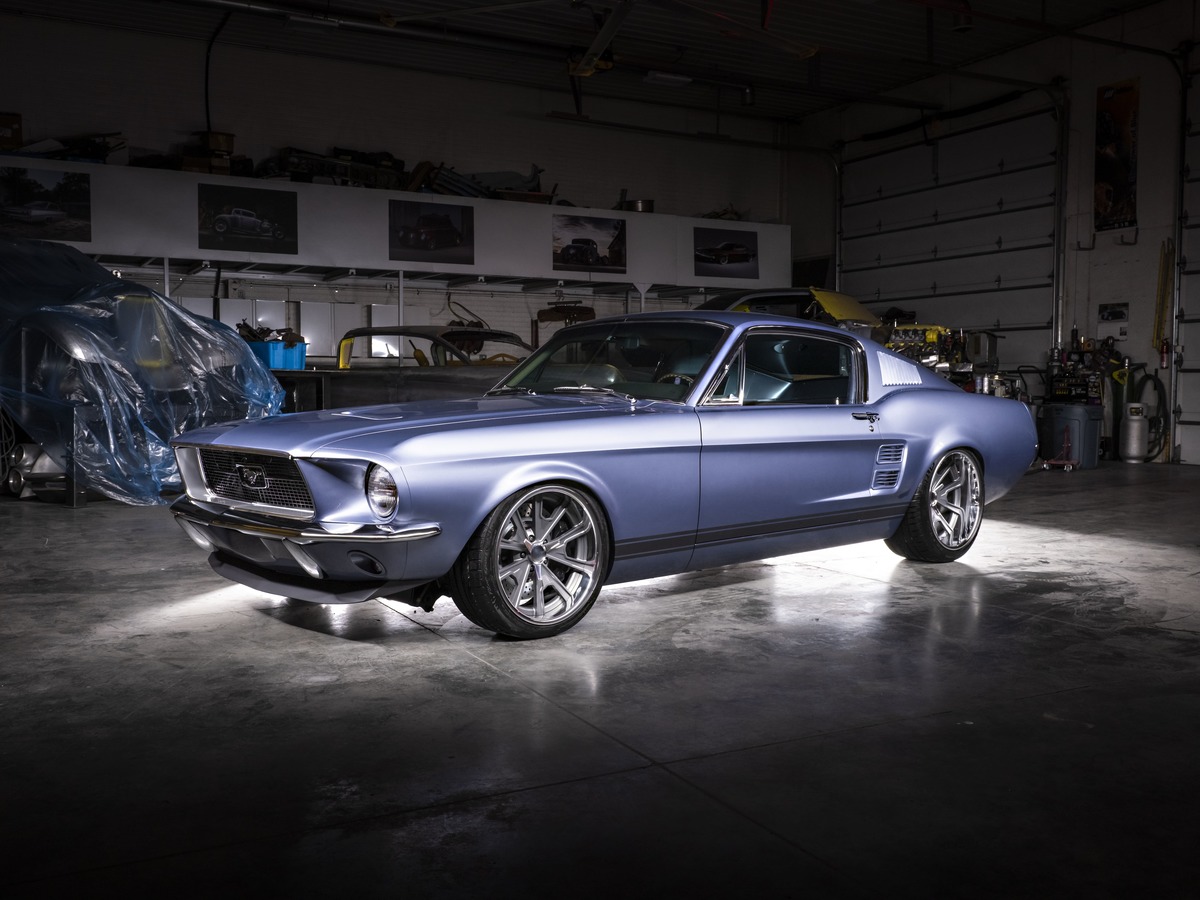 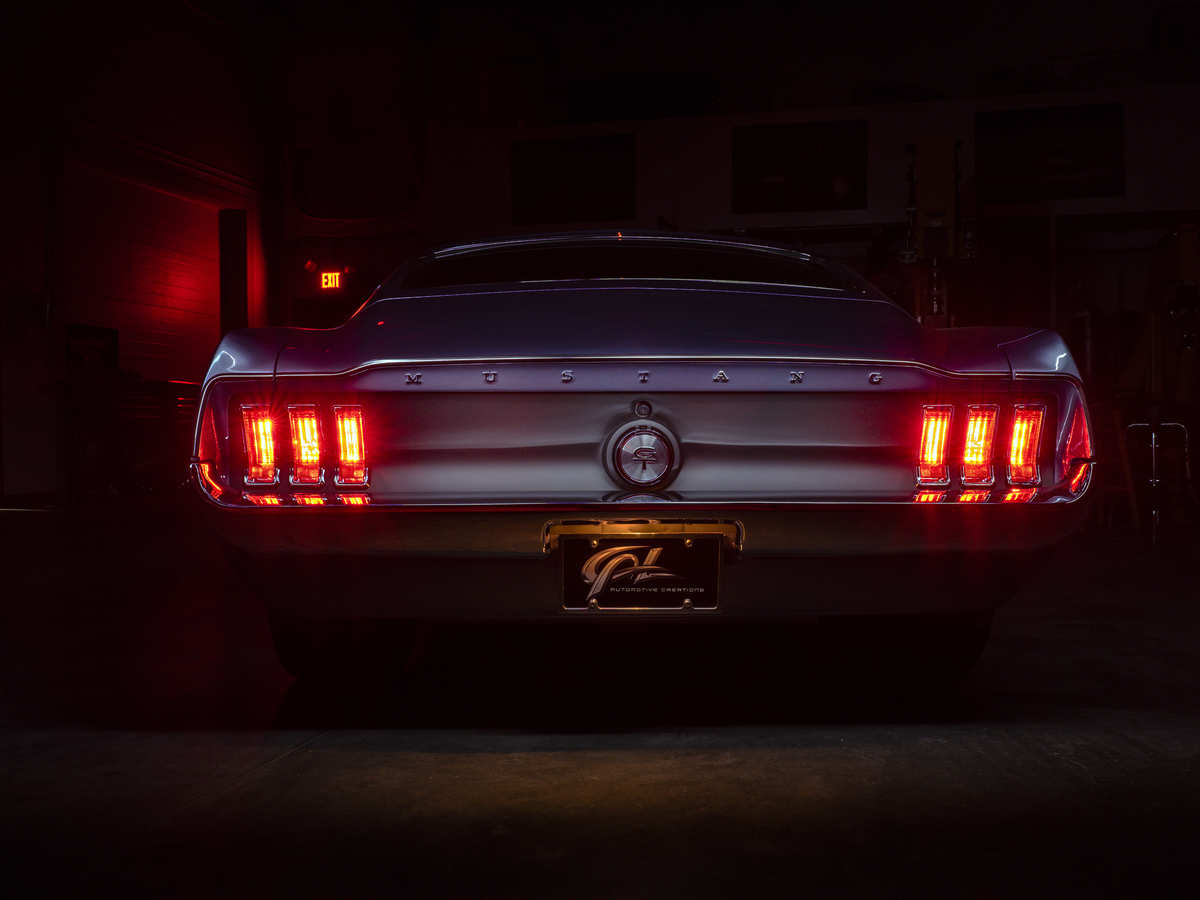 For those of you who make the SEMA Show one of your regular “must-see” events, this Mustang may look familiar as it was debuted in 2019. Yaniv has always enjoyed Mustangs and has a collection of these Ford muscle cars tucked away in his keeping. Still, he wanted a refined fastback that would stand the “test of time” and be as good looking and exciting as it is today a decade from now. That’s where Leach steps in and up. 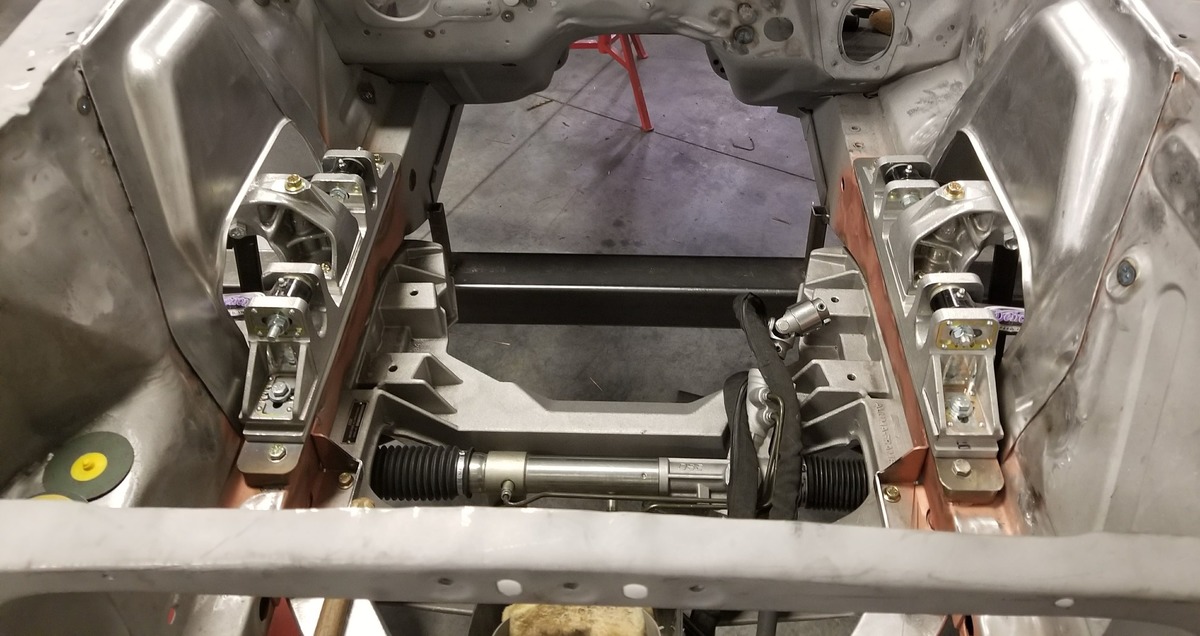 The chassis is based on a Detroit Speed Inc. Aluma-Frame IFS with DSE/JRi aluminum coilover shocks with Detroit-tuned valving (available in three configurations), tubular upper and lower control arms, and, again, Detroit-tuned rack-and-pinion steering with the suspension yielding 6 inches of suspension travel. Next up are the Baer brakes (six-piston calipers with 14-inch rotors at the corners) wrapped around the Detroit Speed forged spindles. Managing the brakes is a Baer master cylinder with an 8-inch power booster that’s pocketed into the firewall and pressed into service. 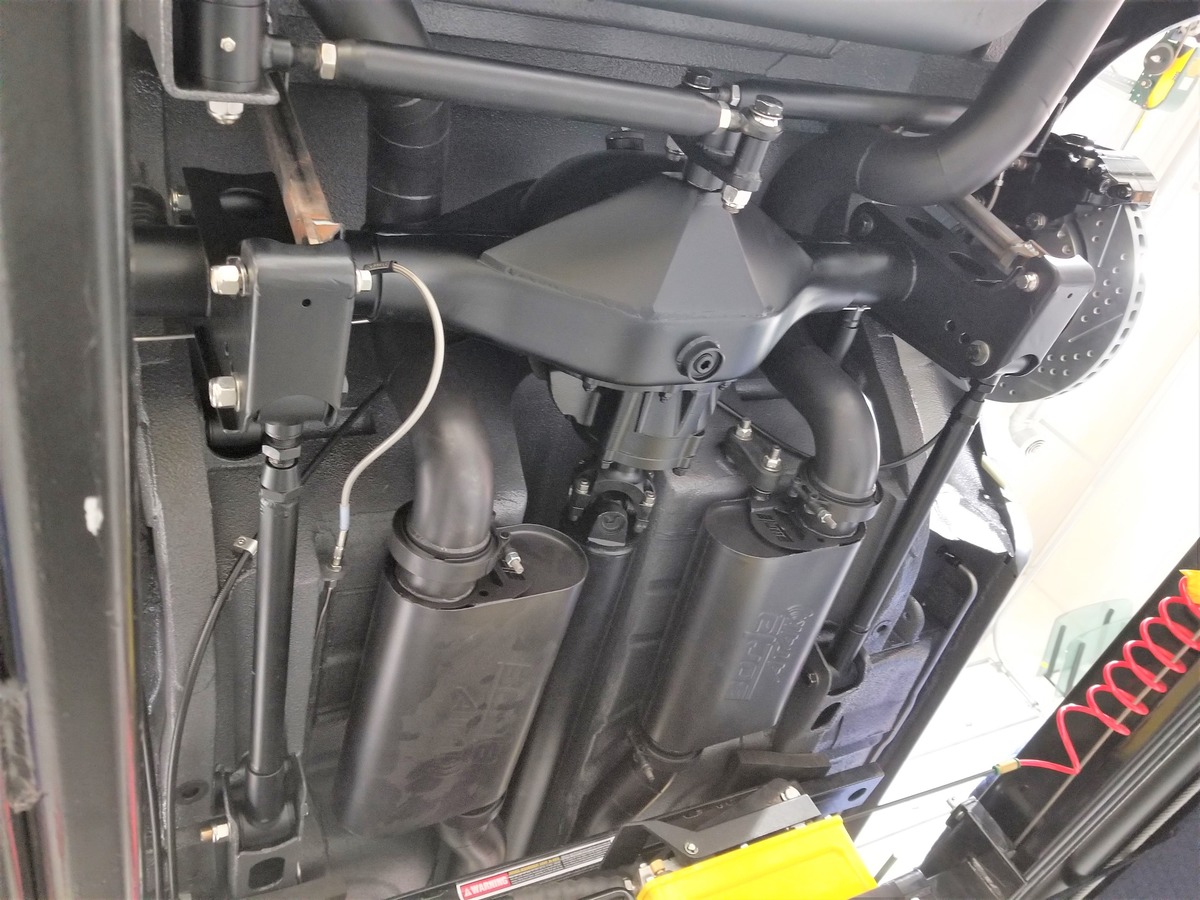 The rear suspension is based on the Detroit Speed QUADRALink fitted with their patented Swivel-Link, which allows the suspension to fully articulate with smooth, solid motion with no binding (produced through the use of high-durometer rated rubber bushings). It should be noted that Cal Automotive Creations did alter the mounting so that the rear suspension was pushed upward (kicked up) beneath the sheetmetal, allowing the car to sit lower over the wheel/tire combination. Also located in back is a Detroit Speed–fabricated gas tank that’s meant to bolt into the factory location and holds 18 gallons of “go-fast” fluid. 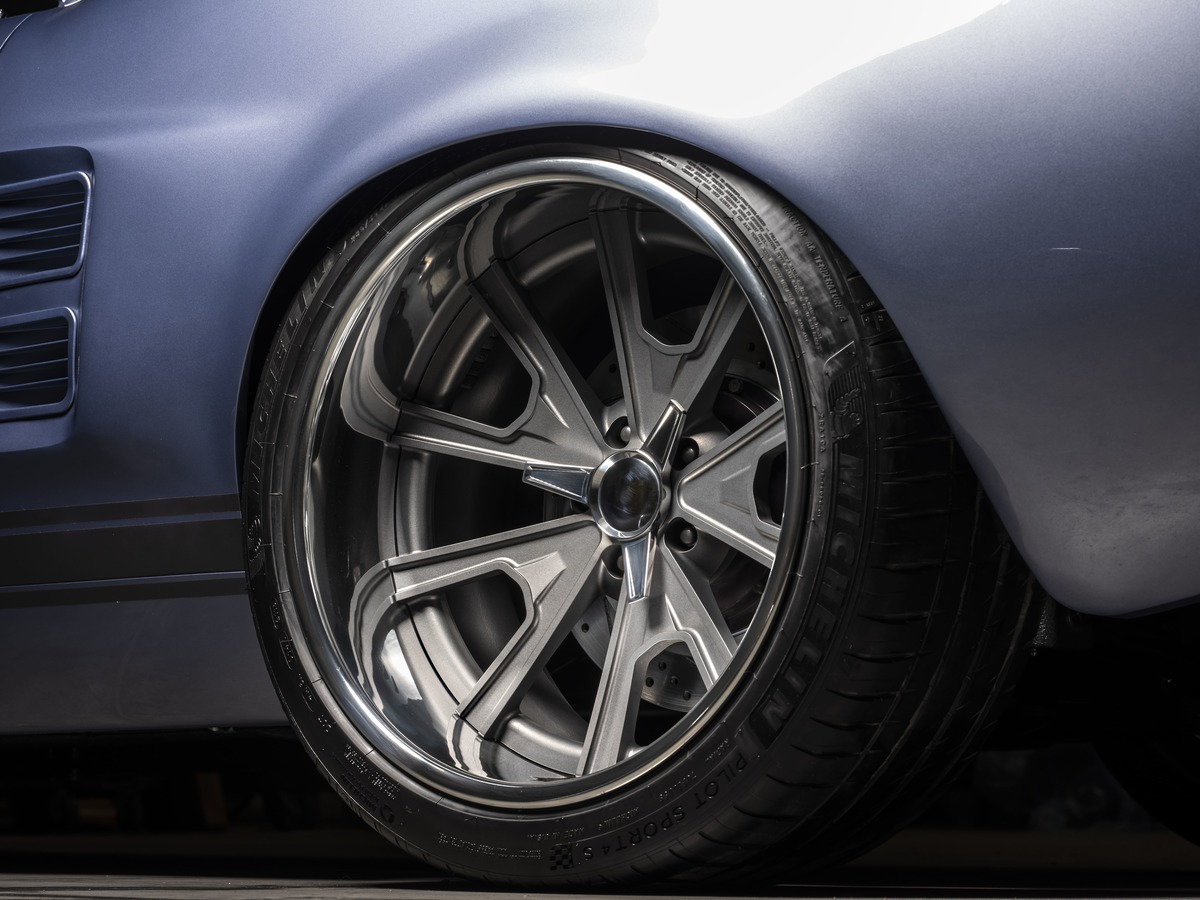 Speaking of the tire and wheel combo, you’ll find Michelin Pilot Sport 245/35R18 rubber in front with 285/35R19 in back wrapped neatly around Forgeline Grudge Heritage Series wheels in a machine finish that measure 18×8 forward and 19×12 rearward. In order to get this much “rubber to the road,” a pair of Detroit Speed rear tubs were installed at Cal Automotive Creations. 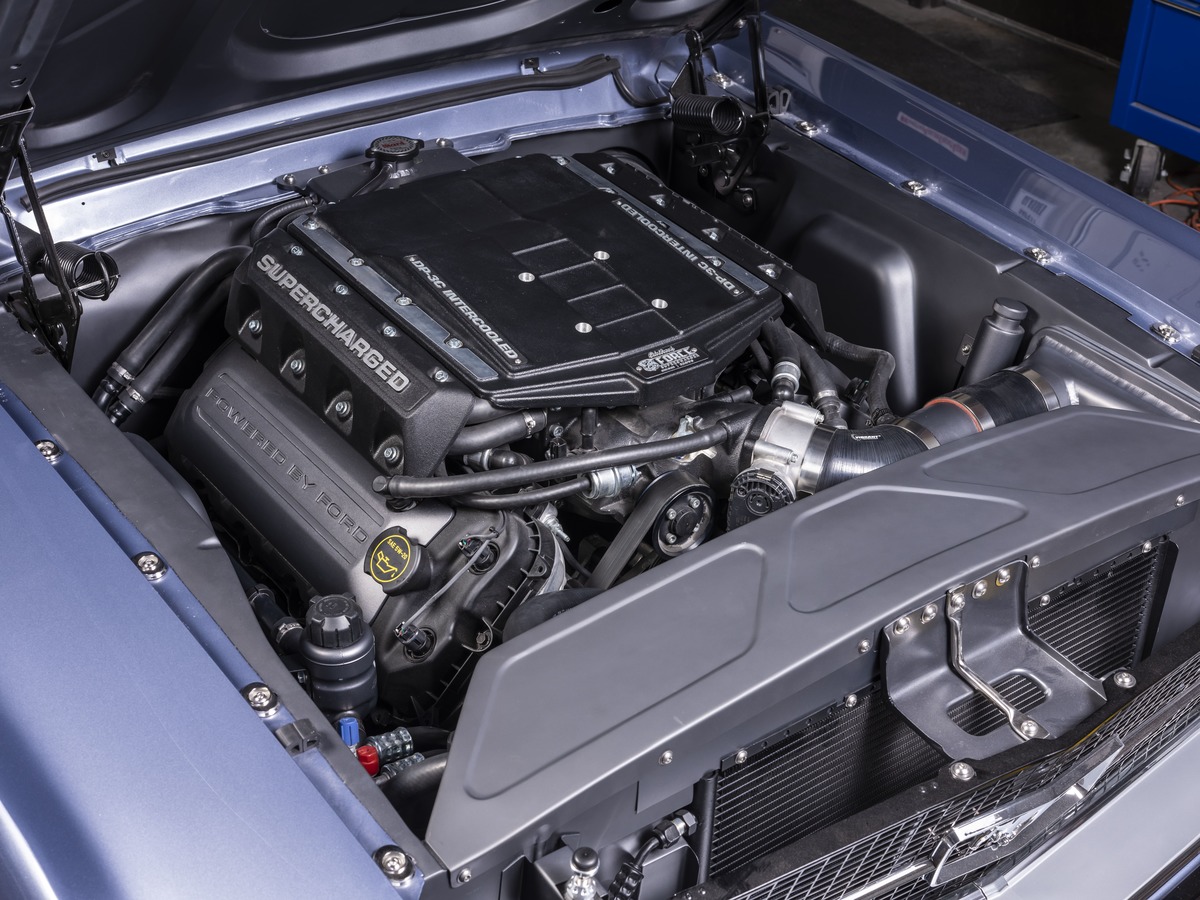 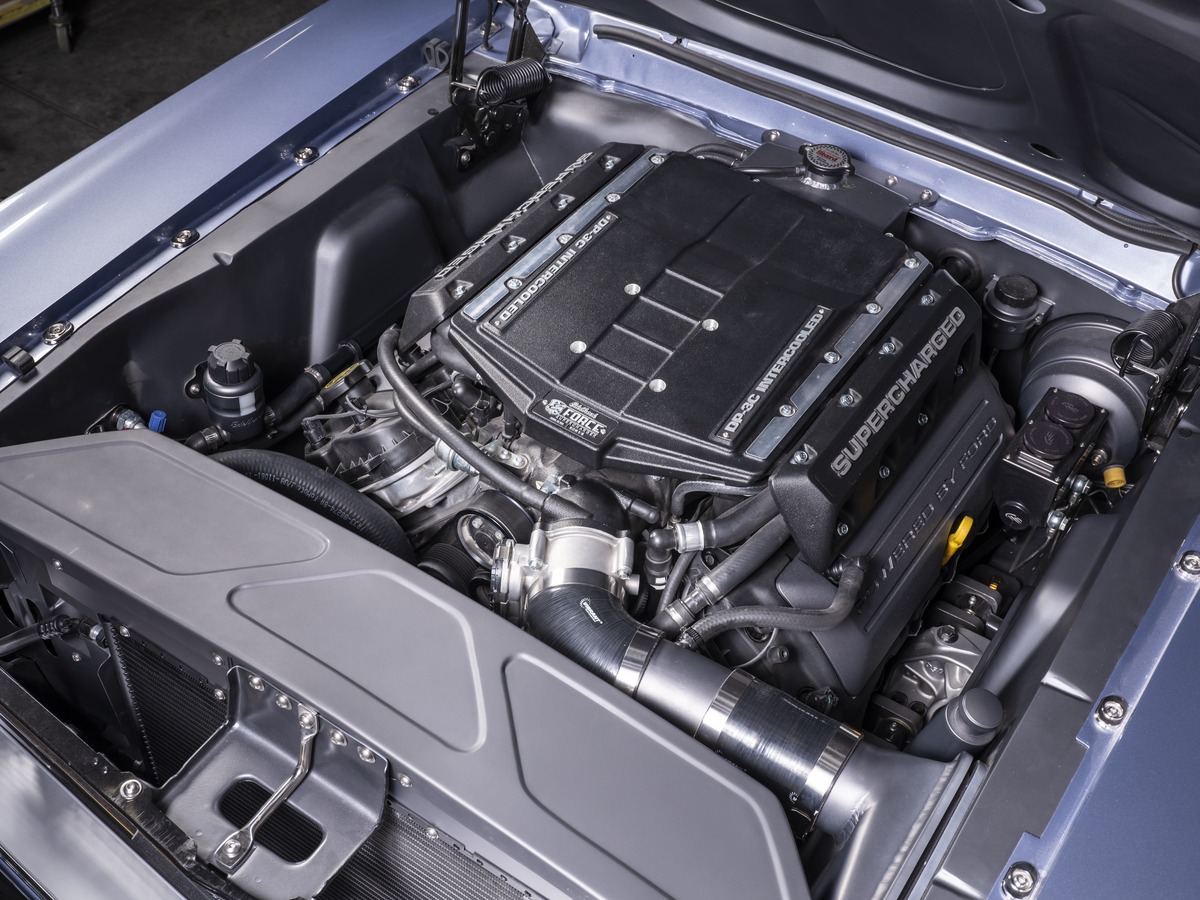 A potent Mustang must have thundering “hooves” and in the case of this 1968 Ford Mustang fastback the “oomph” comes by way of a 2017 Coyote 5.0L (302-inch) engine. The V-8 is topped with an Edelbrock E-Force supercharger (Eaton) that gives this early Mustang late-model punch to the tune of 650-plus horsepower. A Ford factory ECU controls all things cerebral. The motor mounts come by way of the Detroit Speed chassis, as do the headers, while Cal Automotive Creations took over from there and churned out the stainless steel exhaust system that runs through Borla mufflers.

Getting the power to the 9-inch Ford rearend (setup by Detroit Speed) falls to the Bowler Performance Transmissions Magnum XL six-speed package operating off of a Detroit Speed tranny mount. (The gear ratios are ideally suited for street and highway performance: First: 2.97, Second: 2.10, Third: 1.46, Fourth: 1.00, Fifth: 0.80, Sixth: 0.63.) As for the shifter, it’s a combination of “look what we found” and some custom fabwork all topped off by the traditional “white ball” (reminiscent of the muscle car era) with the engraved six-speed pattern. 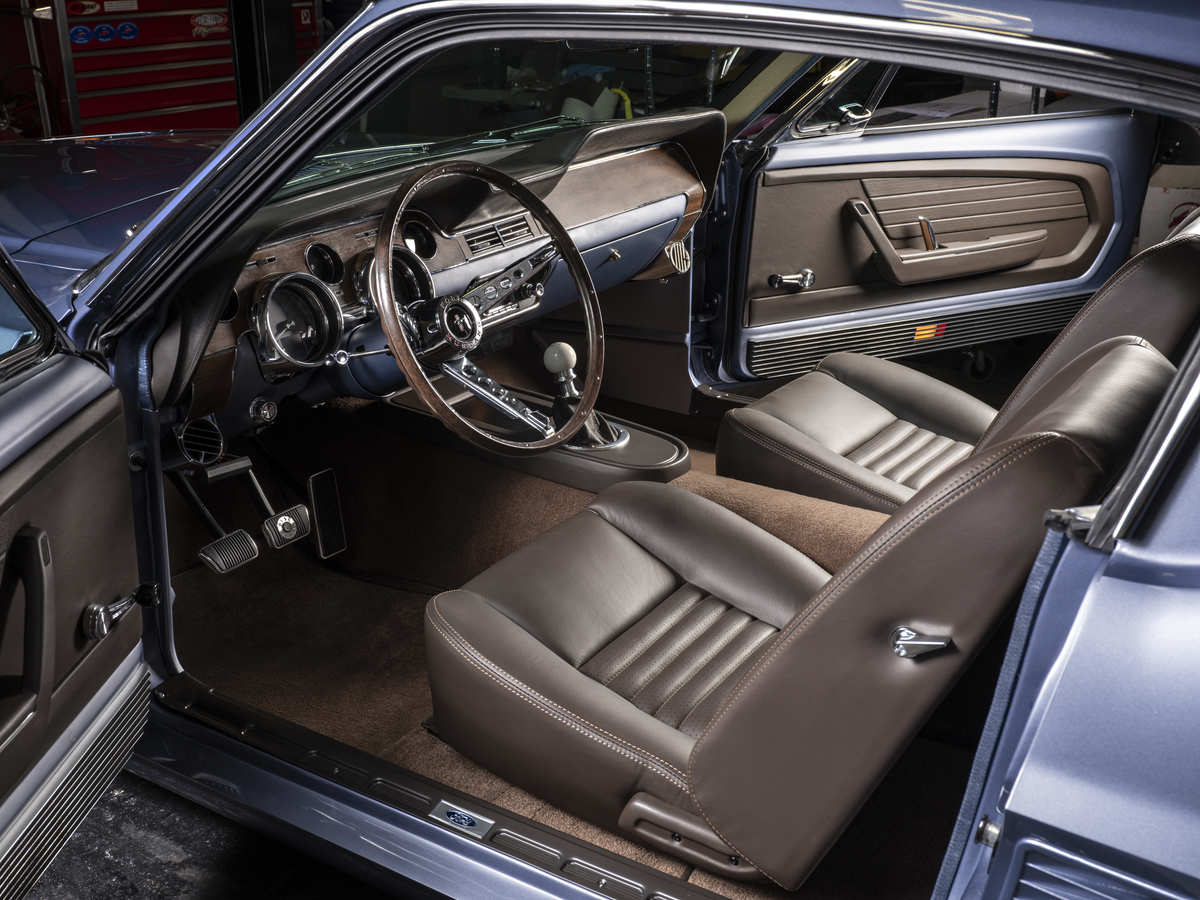 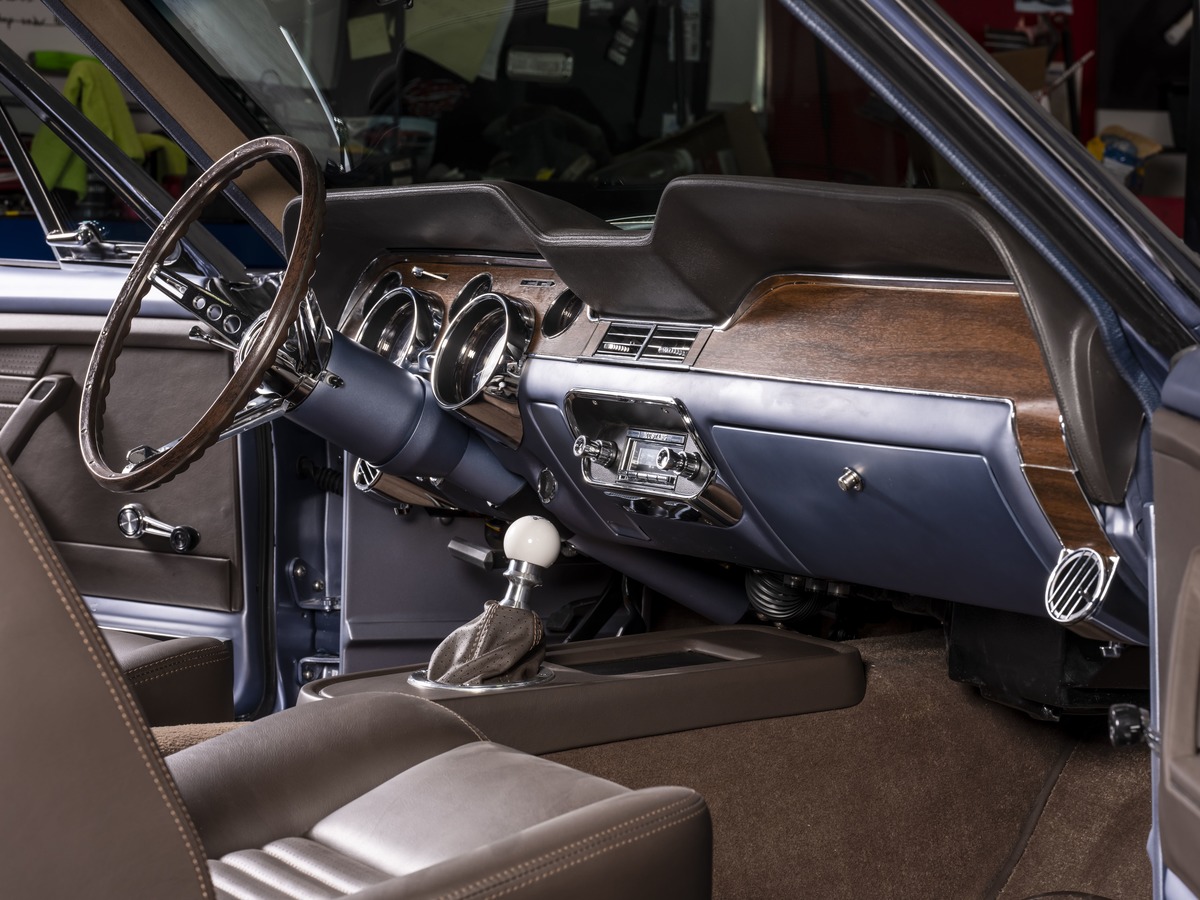 Since we are wandering around the interior let’s get deeper into what’s happening. The Recovery Room received the nod to take the factory front seat frames and stitch in brown leather. The newly built rear seating, while covered in matching leather and pattern, is more Recovery Room handiwork. The steering column is an ididit tilt column linked to a wooden factory-replica drilled three-spoke wheel. Snuggled into the plush buckets followed by a firm grip on the wooden Mustang wheel gives you the perfect vantage point to enjoy the Dakota Digital RTX Series of analog instruments. The speedo face features the enhanced 160-mph readout while the tach has the vintage-looking rpm yellow to red line callouts. Other interior appointments include the Vintage Air (controls mounted to the underside of the dash) A/C, while hidden behind all of the dashboard “eye-candy” is the Coach Controls wiring panel/harness aptly handled by Brad Nagel. 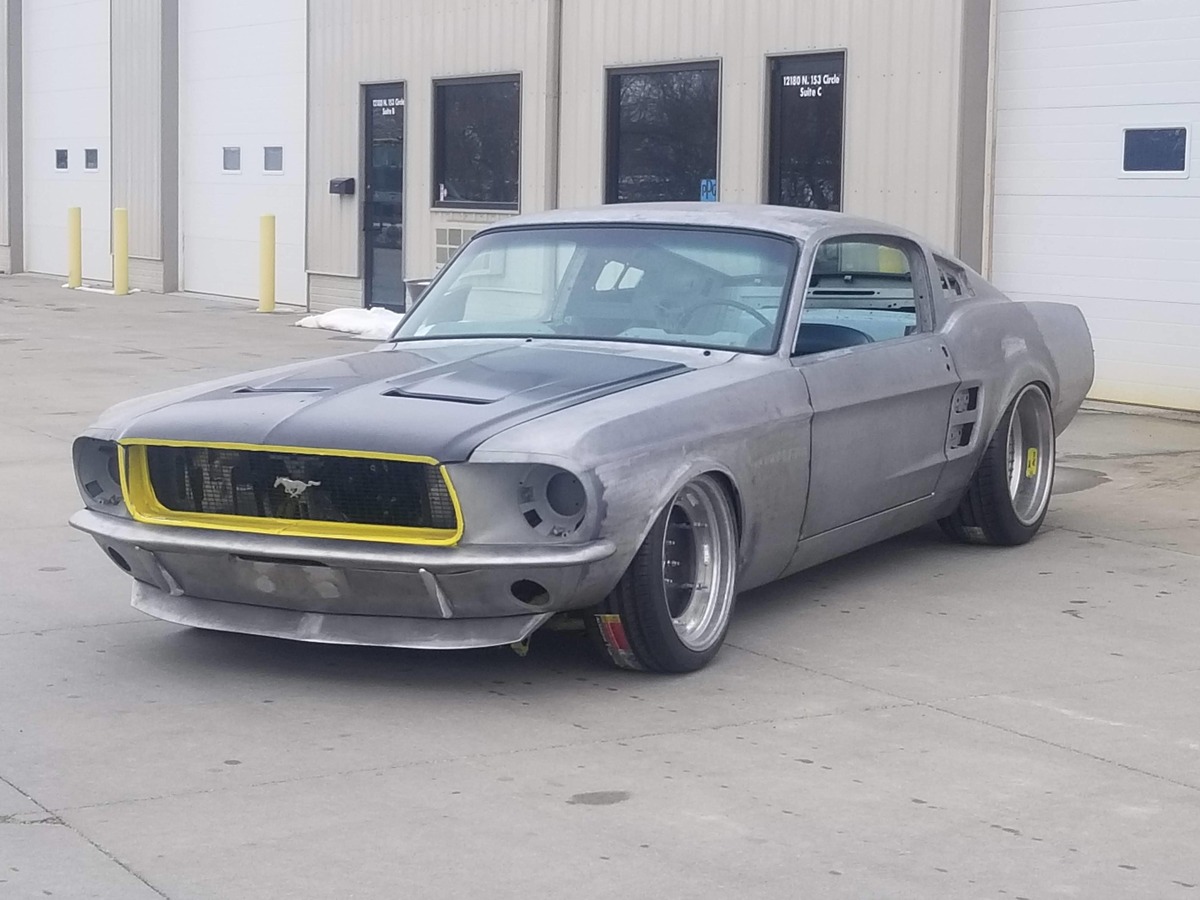 The sheetmetal, while resembling mostly stock, does have a handful of modifications with some very subtle efforts that enhance the appearance without calling attention to the alterations. Several callouts include the expert metalwork by Cal Automotive Creations immediately followed by the meticulous bodywork by Big Oak Garage. Examples of the sheetmetal work include the handmade front and rear fender flares and wheelwell openings. Look closely and you’ll see the wheel openings are positioned and shaped to carefully follow the circumference of the wheel/tire combination while the rocker panels are lowered. You’ll also notice that the bumpers are tucked while the decklid trim is newly machined.

In closing, one should appreciate the Glasurit Glacier Blue sprayed over the Big Oak Garage bodywork from nose to tail by Brian Dinsimore. Believe you’ve seen this hue before? The color palette comes by way of Honda. We believe it’s just the right amount of color to instill the timeless look Yaniv wanted. The 1968 Ford Mustang is a good-looking car by any standard but we happen to think Yaniv has captured the timeless appearance he wanted, which was his goal all along. MR