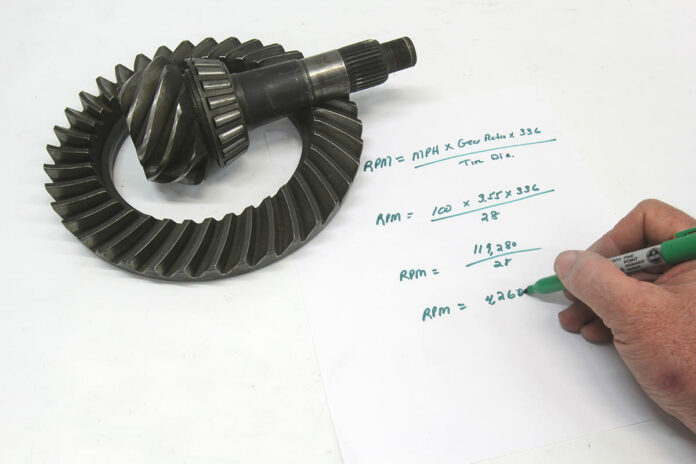 A Look at the Variables That Affect Gear Ratio

Gear ratio is one of the easiest ways to improve acceleration if your goal is a quicker car in the quarter-mile. Or, a gear ratio change can be used to establish a desired engine speed for a better highway cruiser. Or, you may be looking at what effect a rear tire diameter has on highway cruise rpm. These are common questions that come up when bench racing or planning your next project. While it’s common knowledge that a 4.10:1 rear gear ratio is better for the dragstrip than a 3.08:1 rear gear, the questions relate to how to accurately determine the exact result these changes might have on other aspects of building a street car.

If all we wanted to do was build a car for the dragstrip that accelerated as quickly as possible, figuring out that ratio would not be difficult. In fact, toward the end of this story, we’ll show you one way to approach that question. But for street-driven cars, the issue of gear ratio often involves compromise. A 4.10:1 rear gear is great for the dragstrip, but it comes at the unacceptable price of excessive engine rpm for highway cruising. This story will offer some simple math equations you can use that will offer insight into the effect of gear ratio and tire diameter. We’ll also illustrate how an overdrive ratio in the transmission will improve highway cruise rpm.

Let’s start with a simple example. Let’s say we are building a C10 Chevy pickup for the street. The truck will be powered by a mild LS 5.3L LS engine and backed with a TH350 automatic transmission. Let’s say that you may decide to tow with this truck so it needs a decent rear gear. Let’s put in a 3.55:1 rear gear with a 27-inch-tall rear tire. The question then is how to predict the engine cruise rpm at 70 mph.

In the accompanying chart, we’ve listed a series of simple formulas you can apply to determine different aspects of vehicle performance. With this first example seeking engine rpm at 70 mph, we’ll choose the second formula that solves for engine rpm.

This shows us that at 70 mph our engine cruise rpm will be roughly 3,100 rpm, which is probably a little more than we’d like. This formula assumes we are using a manual transmission. But with a TH350 trans and even a stock torque converter we can assume at least another 150 rpm or so of slippage, which will push the cruise rpm on level ground to around 3,250.

We can plug in some other numbers like a taller (numerically lower) rear gear or a taller rear tire and play around with this formula. Let’s start by looking at the effect a rear gear or tire diameter change can have on highway cruise rpm. Let’s say that we’re looking for a significant reduction in this highway cruise engine speed but we don’t have the budget to spend on an overdrive transmission like a 700-R4 or 4L60E. Let’s instead change from the 3.55:1 ratio to a more sedate 3.08:1 and add a taller, 29-inch rear tire. Here’s what that would look like in our formula:

In this example, we’ve cut the cruise rpm by about 600 rpm. The actual cruise rpm at 70 mph would be higher by 150 rpm to roughly 2,650 with the converter slippage, but the effect is significant and highway fuel mileage would probably improve.

Before we leave this example, let’s look at what effect tire size has on gear ratio. Using the gear ratio formula, we can determine what gear we need by plugging in the desired speed and tire size. For this version, we’ll substitute a taller 30-inch tire with a cruise rpm of 2,500 (excluding converter slippage):

This reveals that if we wanted a cruise rpm of 2,500 and a 30-inch-tall rear tire, it would require a 3.19:1 rear gear ratio to produce this solution. So you can see that you can quickly come up with a simple way to calculate what you need without guessing. Again, this assumes no slippage from the torque converter.

Now let’s move to a different example. We actually ran through this with our V-8 S-10 pickup that originally came with a 3.73:1 rear gear. With a TREMEC T5 five-speed behind a mild 355ci small-block, highway cruise rpm was a bit higher than we wanted using a short 25.5-inch rear tire. Plus, First gear was almost useless because it was so steep. While changing the rear gear would have accomplished what we wanted, we decided to add a taller rear tire to quickly accomplish the same effect. The short rear tire resulted in a 3,440-rpm engine speed at 70 mph in Fourth gear, but we had a five-speed with a 0.74:1 overdrive. The last step would be to multiply that 3,440 rpm by 0.74, which brought the cruise rpm down to an actual 2,545 rpm.

Overdrive ratios in transmissions are another way to keep the rear axle ratio higher numerically while still enjoying a reasonable highway engine speed to reduce noise and improve fuel mileage. In the above example, the overdrive ratio in Fifth gear is 0.74:1. So if we have an engine speed of 3,000 rpm, an overdrive ratio of 0.74:1 effectively increases the output shaft speed by 26 percent (100 – 74 = 26). So a 3,000-rpm engine speed would create an output shaft speed to 3,780 rpm. This has the same result as running at a speed like 70 mph with a 26 percent slower engine rpm. In the above example, the 3,440 rpm is reduced to 2,545 rpm.

Returning to our tire example, adding a taller 28.5-inch rear tire drops the cruise rpm in Fifth gear to an even lower 2,278 rpm—or a reduction of 267 rpm. This is not a huge difference, but what this taller tire does is also change the effective rear gear ratio. We can figure that out by using the Effective Gear Ratio Formula:

We promised earlier that we’d deliver a simple way to calculate dragstrip gear ratio, so let’s do that now. Let’s say you have a hot Camaro that you think will run 125 mph in the quarter-mile. Your combination is a strong 468ci big-block Chevy making around 575 hp, the car weighs 3,400 pounds, and you’ll be running a 31-inch-tall rear tire. This should run near 125 mph or perhaps a little faster, and you don’t want to spin the engine higher than 6,500 rpm. To determine a decent gear ratio, all we do is input the numbers into the gear ratio formula.

This result splits the difference between a 4.56:1 and a 4.88:1 rear gear. If you think you might eventually run faster than 125 mph, then the 4.56:1 or perhaps a 4.11:1 are the next choices. There are two variables that are not taken into account with this example. The first is the amount of slippage from the torque converter if the car is equipped with an automatic transmission. The second variable is the tire diameter expansion at speed. Bias-ply tires experience more of a change in diameter than radials. Adding in one or both of those variables would also point toward using the taller gear like the 4.56:1 or 4.11:1.

We have omitted a discussion of the effect of transmission ratios on acceleration in order to keep this story abbreviated. All you have to do is look at the trend of new car transmissions to see that adding additional gears will help acceleration. A five-speed trans reduces the rpm drop between gears and helps acceleration compared to a three- or four-speed gearbox. We’ll save a more detailed discussion for a later story that will allow us to dive more deeply into the details. There’s a reason the new Corvette C8 has an eight-speed, dual clutch transmission, and man, does it shift quickly!

There are many more examples we could plug into these useful formulas, but the real reason for presenting this information is so that you could plug in your own numbers and come up with a solid plan for your next modification. The best news is that you can perform these changes without spending a dime until you figure out what ratio offers the best compromise between acceleration and highway cruising. All you need is a basic calculator and a little bit of time to plug in the numbers. So have at it!