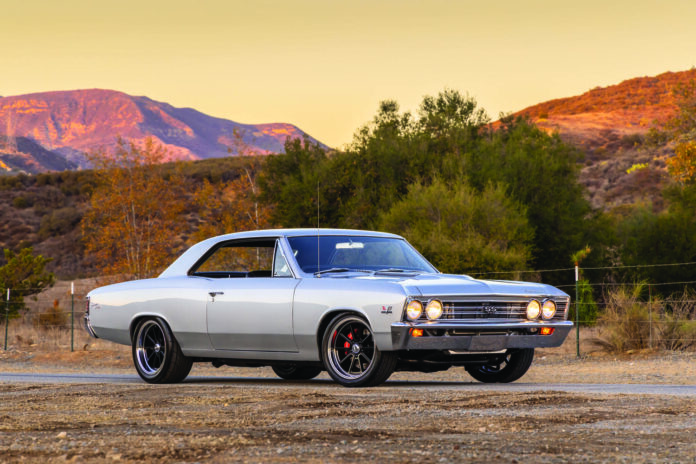 There are those who acquire the bug for all things mechanical as they navigate through life, while others seem to be born with the gene. Eric Fernandez is of the latter and performed his first engine swap at age 13. It was in his go-kart that he felt needed more horsepower, so he swapped out the old Briggs & Stratton for the more powerful Honda engine from his dad’s roto tiler. “Initially my dad was upset when he saw what I had done, but after calming down, he asked me if it worked,” Eric fondly remembers. “I started it for him and did a couple laps and remember seeing the smile on his face and him being surprisingly proud. I’ve been wrenching on engines ever since.” 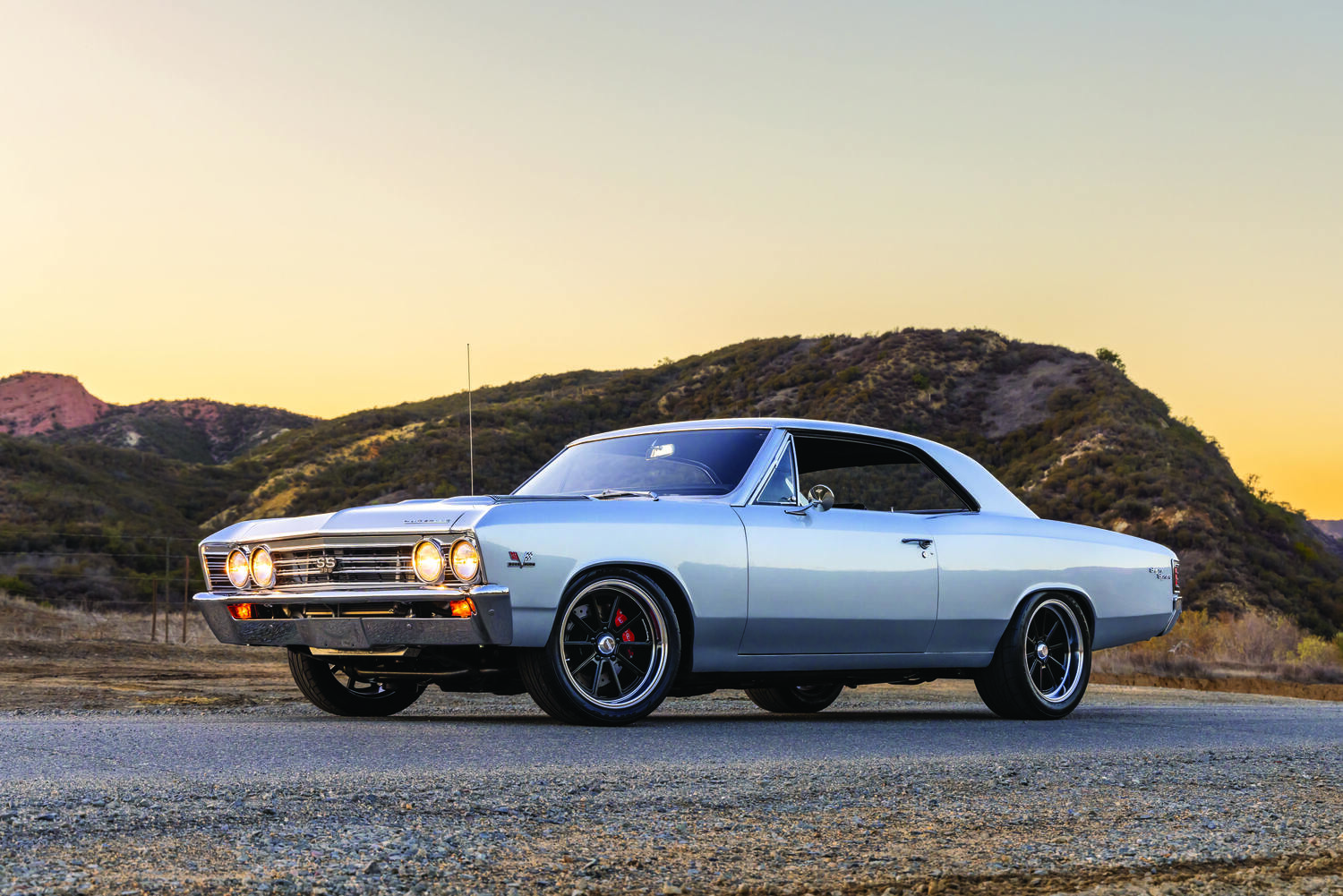 In high school Eric remembers one of the kids driving a ’67 Chevelle to school every day. Seeing and hearing that car pull into the parking lot tugged at Eric’s emotions to the point that car became his dream ride.

Check This Out: HushMat on a Chevelle

About eight years ago, Eric was on a serious hunt for a ’67 Chevelle to fulfill that dream when he spotted this one on Craigslist. Located in an old truck yard in Chino, California, about 30 minutes from his home in Anaheim Hills, the car had no engine, no transmission, no interior, no nothing. What it did have was a small rust area just below the rear window and a whole bunch of potential. He handed over $2,200 for the roller and flatbedded it to his home garage and dug right in. “I disassembled the car right away and sent the shell out for paint and bodywork while I upgraded the chassis and suspension,” Eric tells. “Once the body came back with fresh paint, I mounted it to the frame where it sat for the next 4½ years.” 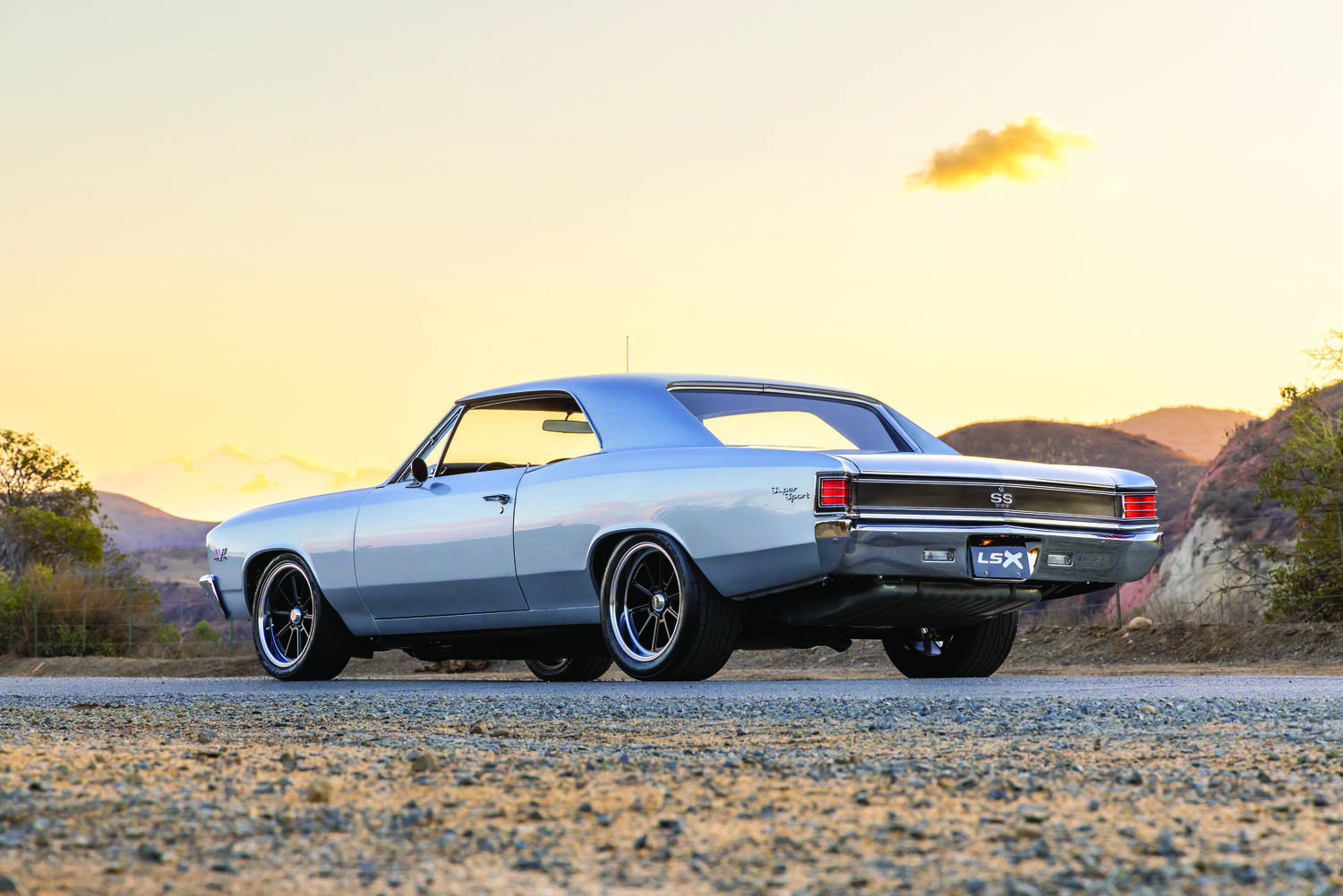 It wasn’t that Eric lost interest–far from it. Family life (second and third kid being born) and a home remodel put the Chevelle on hold for a few years. Once time freed up, Eric refocused on the car. Doing all the work himself added time but Eric wasn’t facing any pressure to meet deadlines, his main concern was getting the car done right and to his specs.

Picking at the project on nights and weekends it took about seven years from start to finish, but Eric estimates actual time spent working on the car was between two and a half to three years total. Not bad for a ground-up project being done by a lone solder. 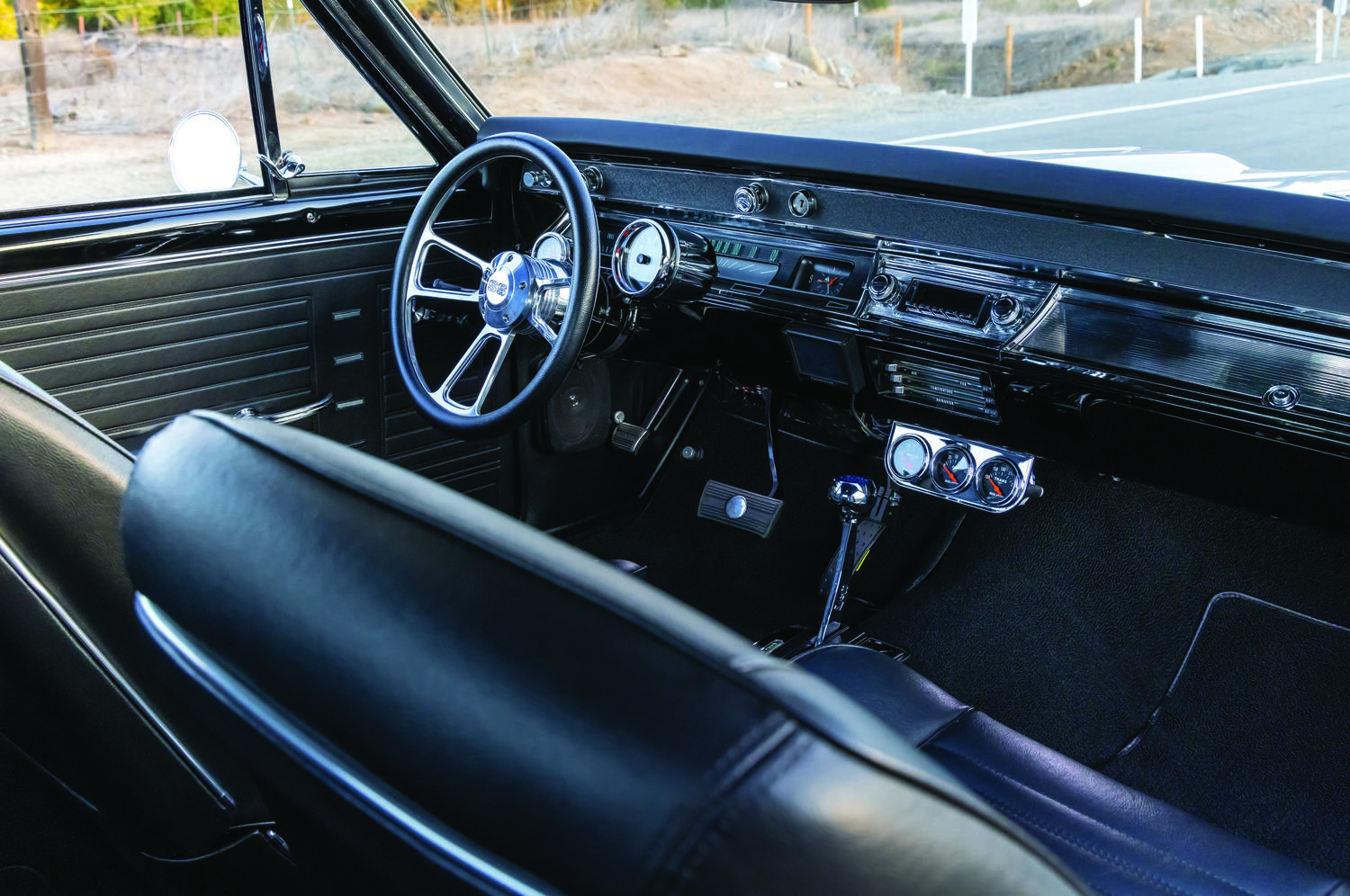 Once ready for power, Eric initially dropped a 468ci big-block in the car but soon had a hankerin’ for something more modern. Without ever firing up the big-block, he swapped in an L96 6.0L truck engine. Engine swaps were the catalyst to Eric’s madness, so he was in familiar territory. Besides, the big-block found a good home in his brother’s ’68 Nova. “A carbureted big-block that gets about 8 mpg wasn’t the direction I wanted to go with this car,” Eric adds. “I wanted something reliable and powerful that would get decent gas mileage, so the LS made more sense. I upgraded it with a Texas Speed Stage 3 cam and dual valvesprings and drove it like that for about five months. Similar to my go-kart days, I felt the car needed a little more pep, so I bolted on a 2.9 Whipple supercharger.” 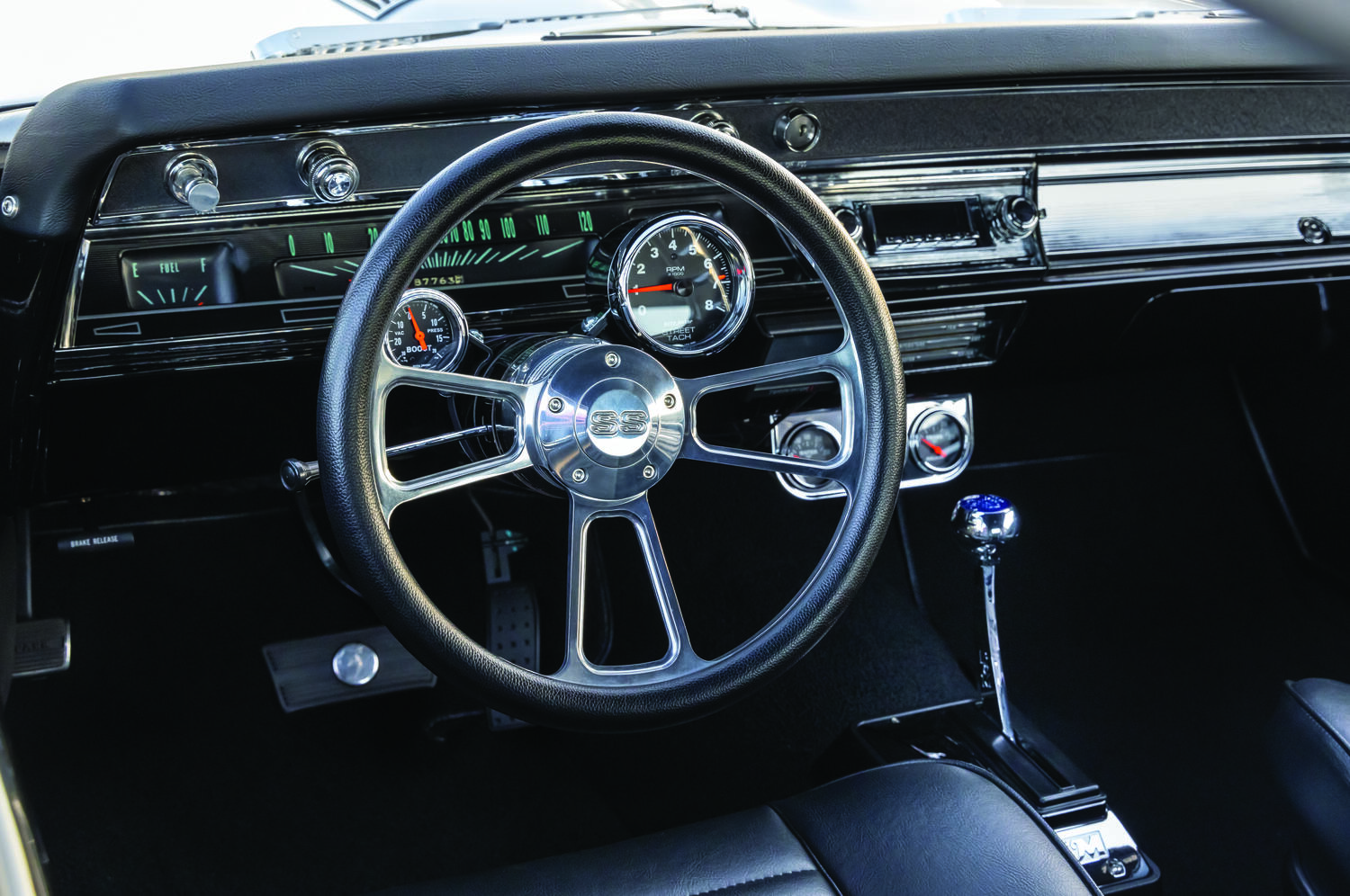 Eric headed over to KP Fab and Tune in Rancho Cucamonga, California, for dyno testing where the car busted out a stout 623 hp to the tires on gas—near 700 hp on E85 and 9.5 pounds of boost. That’s the kind of power he was looking for; the reliability and improved fuel mileage is a bonus.

With plenty of grunt on hand, Eric moved onto the driveline and installed a 4L80E, but not before it got the onceover by Trans Auto Express in Long Beach, California, in order to handle the upgraded power. A Circle D 3,400 stall torque converter backs it all up and sends power to a Drive Lines Inc. 3-inch driveshaft and a Quick Performance 9-inch rearend stuffed with a Strange Engineering centersection, limited slip differential, and 3.70 gears. A TransGo Shift Kit provides proper pressure for solid shifting. 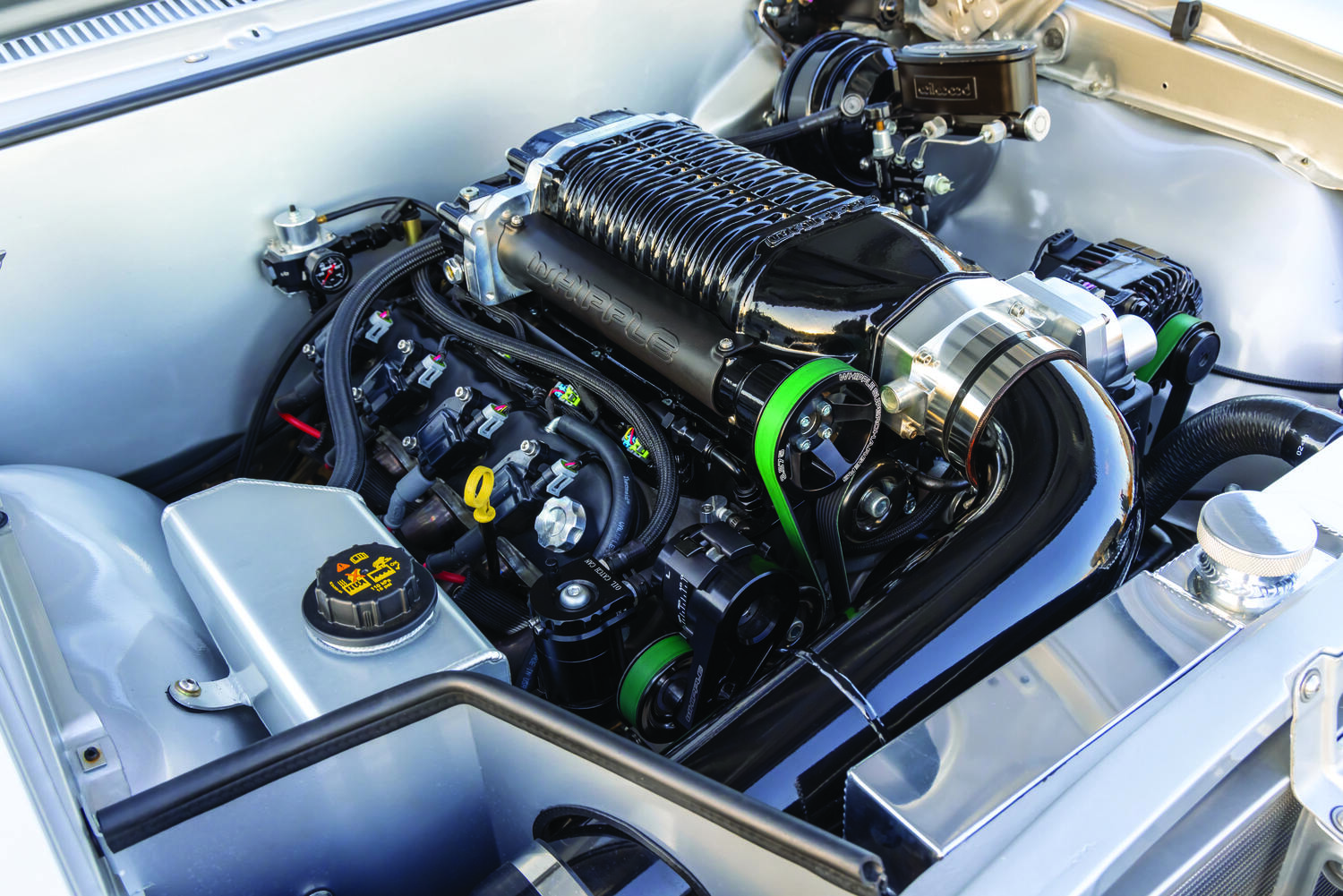 Handling and an aggressive stance were also aspects Eric set to improve on the vintage A-body, so in went a set of Classic Performance Products (CPP) upper and lower control arms up front accompanied by CPP spindles. Viking double-adjustable coilover shocks and 500-pound springs ensure a solid ride. Out back, Eric went with upper and lower UMI control arms and once again called upon Viking coilover shocks along with a set of 250-pound springs. A UMI frame brace and Hellwig sway bars keep body roll to a minimum when Eric takes to SoCals’ Santiago Canyon twisties. Arnaco Industrial Coatings in Pico Rivera, California, did the black powdercoating to give the chassis a uniform appearance. 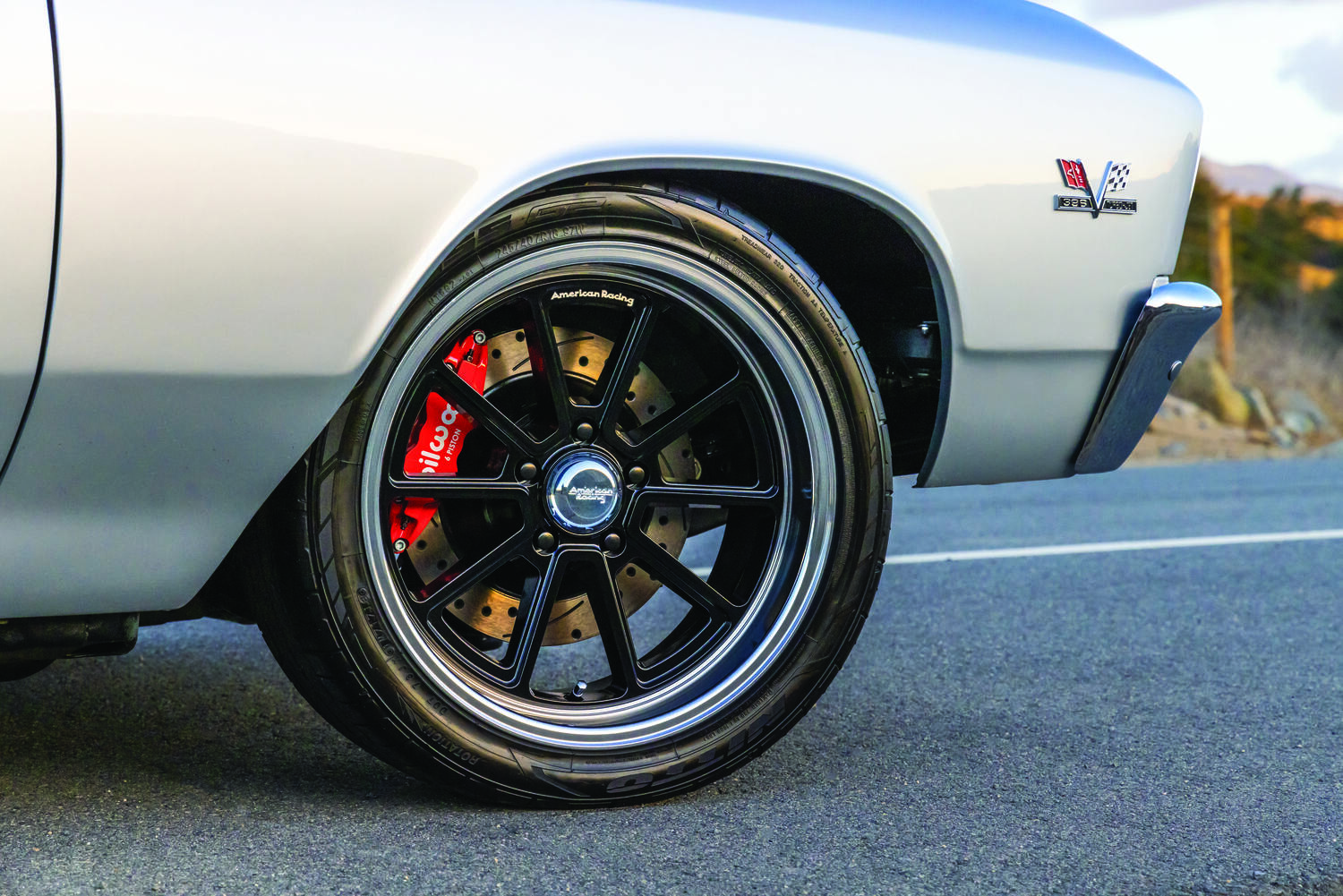 Inside the cockpit is a solid foundation of factory styling updated with fresh reproduction bits. The stock seats were treated to new bolstered foam from TMI then wrapped in factory-appearing TMI vinyl covers. Eric took on the interior himself and installed Original Parts Group repro door panels, dash, and black loop carpet to keep the car’s vintage DNA in check. The underdash Auto Meter gauges and column-mounted tach gives a nod to the era of day-two restos, and the Forever Sharp steering wheels adds a skosh of modern influence. 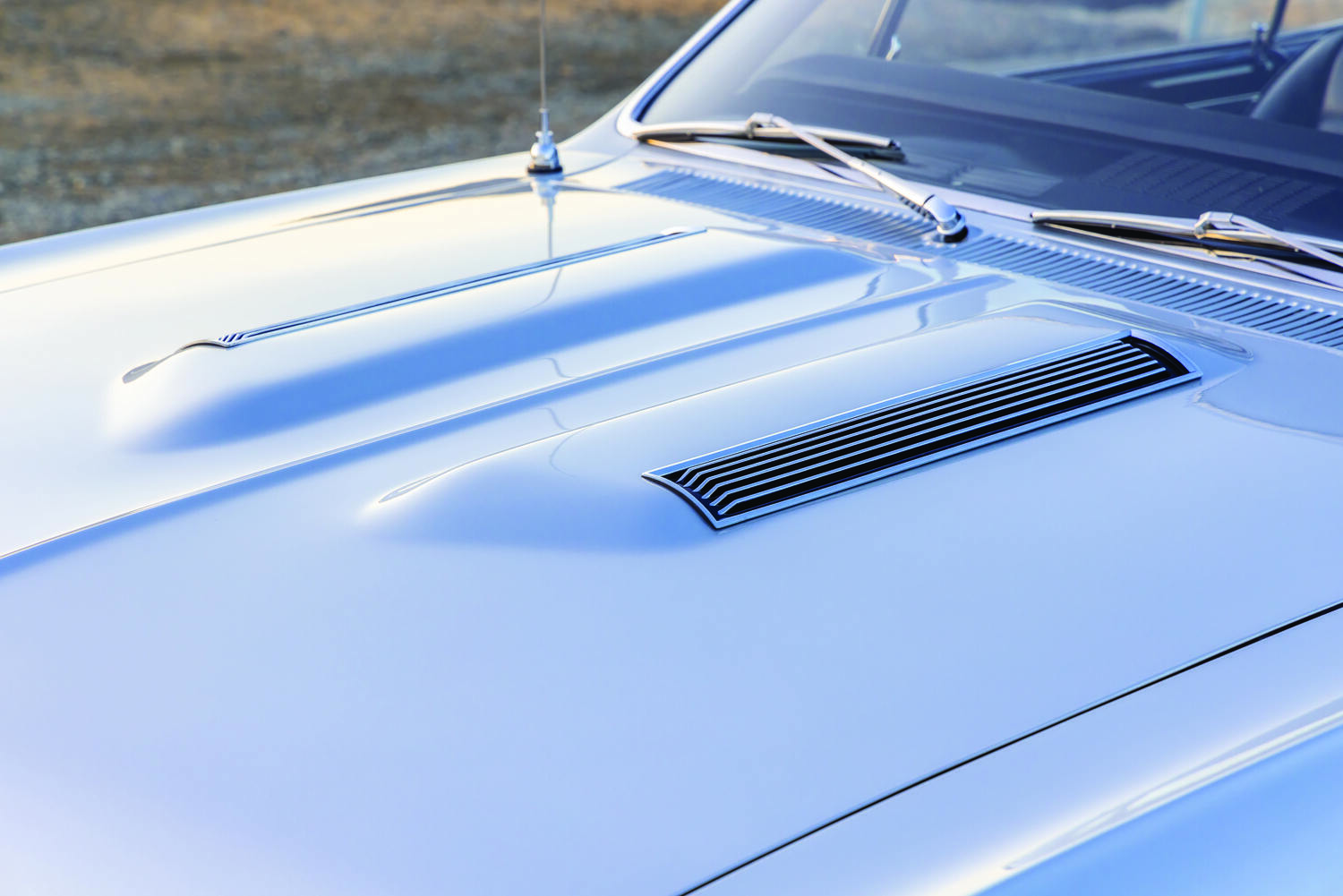 Eric is proud that the original sheetmetal survived the elements for over 55 years and required minimal fuss from the gang at The Auto Clinic Auto Center in Long Beach. Sure, the body had a few scrapes and bruises but professional body prep unveiled a smooth canvas for The Clinic crew to splash the body in a sea of PPG Mercedes Iridium Silver. The door handles are original and bumpers are reproductions from Classic Industries.

Yeah, those high school years tend to leave a mark, and in this case that mark was left on Eric and his desire to build a stunning Chevelle that shows off his talent and relentless perseverance that stretched over an eight-year period. But Eric didn’t waver; he kept his priorities in check and set his sights on the end game. 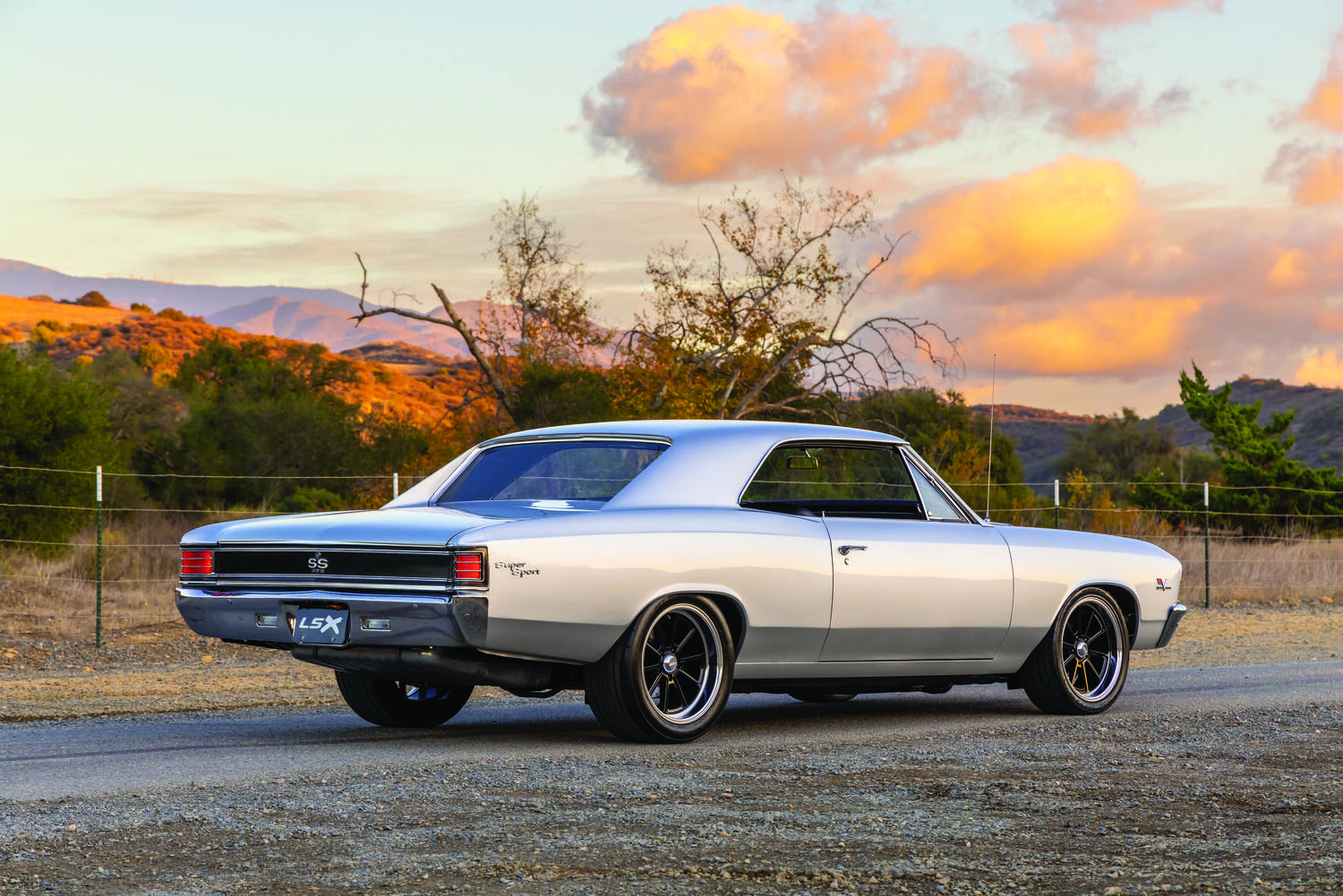 “So far the most memorable moment with the car was driving my wife and kids to Thanksgiving dinner last year after the car had been inoperable for about seven years,” Eric fondly remembers. “It was a very proud moment for me and a great experience for my family.” 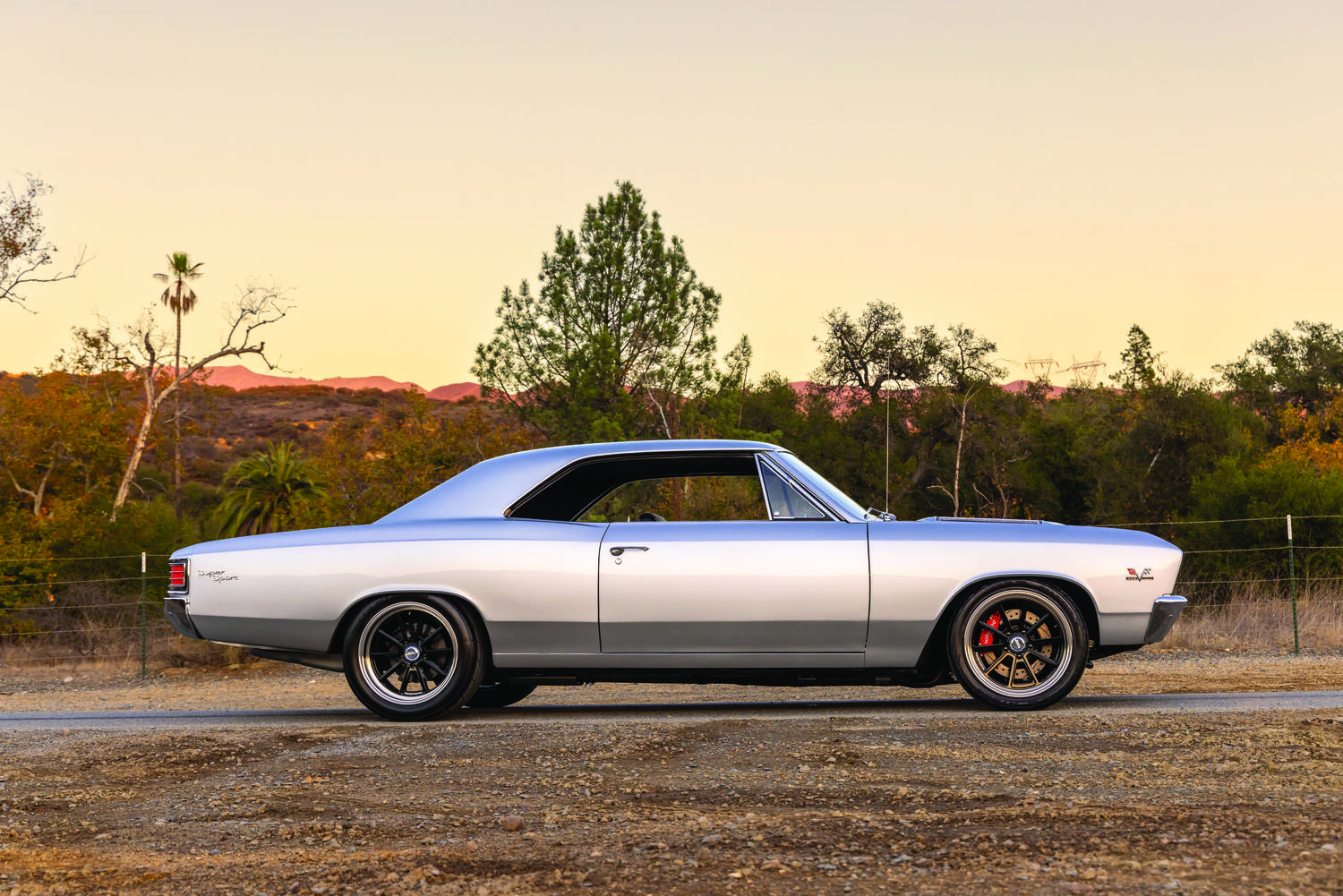 Eric’s not the kind of guy to sit around wait for life to come his way. Nope. He’s more about going after it and getting it done right regardless how long it takes. Just have a look at his amazing Chevelle–’nuff said.
ACP