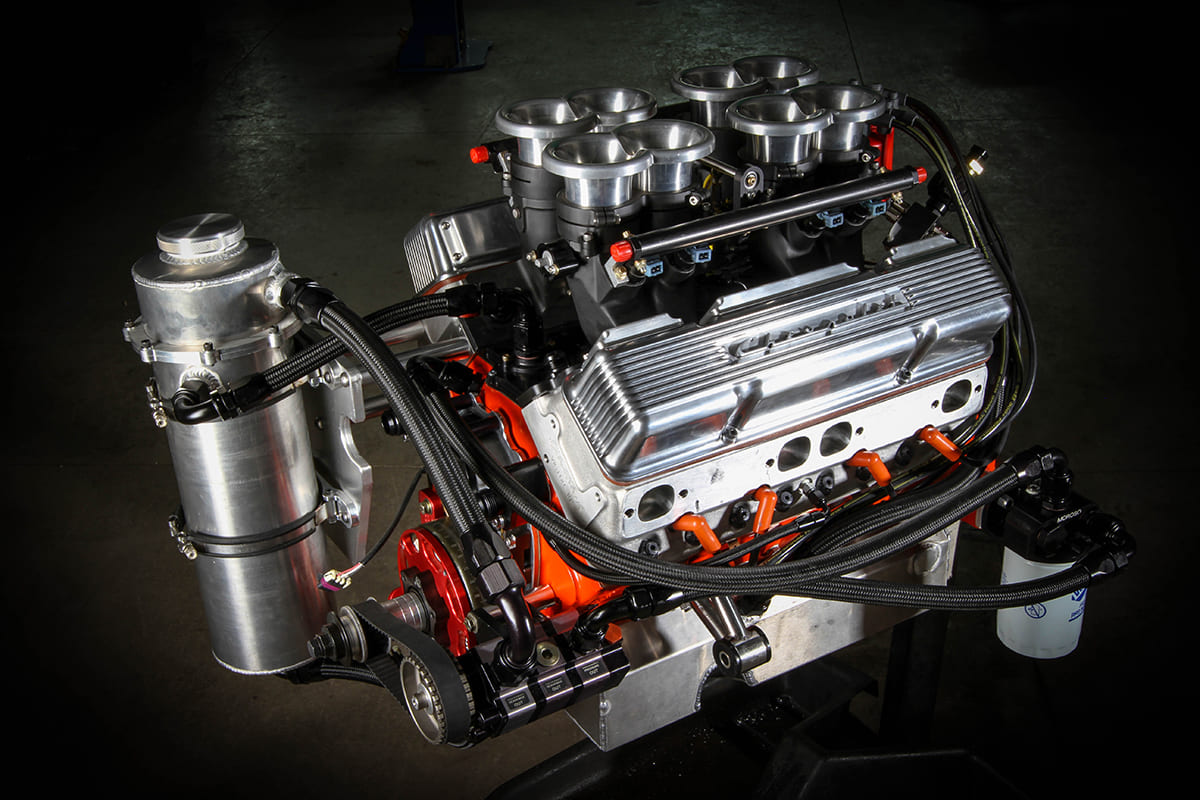 With 436 ci, natural aspiration, and EFI, the project engine we’re going to discuss in this story spun to 7,300 rpm and lit up the dyno with 708 hp and 614 lb-ft of torque. That was with a comparatively small camshaft and a pump gas–friendly compression ratio.

Those peak numbers are impressive, but perhaps more so was the fact that its glorious, neck-tugging torque came in immediately in the powerband: 451 lb-ft at only 3,500 rpm. That’s only 19 lb-ft short of the factory LS7 engine’s peak torque of 470 lb-ft, which occurs at 4,800 rpm.

Comparing this small-block, which was designed and built by John Lohone, of Michigan-based Valley Performance, with the vaunted LS7—the naturally aspirated king of LS engines—may seem an apples-to-oranges matchup, but the parallels are surprisingly similar. The displacements are within 9 ci and both have similar compression ratios and rpm capabilities. And as mentioned above, this small-block is naturally aspirated and employs electronic fuel injection just like the LS7.

One more thing: Both have an aluminum block and aluminum heads, as the small-block is based on a Dart casting. Builder Lohone was strategic in the design of the engine and because it was intended for a replica of the small-block–powered Cheetah race cars developed by Bill Thomas he was insistent on the lineage of the powerplant.

“It would have been easy to drop in an LS crate engine and hit the street and track, but I wanted the engine for this car to honor what the original Cheetahs ran,” Lohone says. “Using an aluminum block and heads offers the enhanced weight balance that an LS engine would have delivered, but with the classic small-block sound and feel.”

Let’s talk about that feel for a moment because for all their high-revving capability, LS engines—and LTs for that matter—just don’t compare to a small-block when it comes to low-down, guttural torque production. It’s an immediate feeling of power, which the dyno results for this engine corroborated.

“We were looking for 700 naturally aspirated horsepower, which we achieved,” Lohone says. “But the real surprise was the broad torque band. It starts early and hangs on all the way to the end.”

“The goal is to drive it on the street and have fun at track days,” Lohone says. “It’s not a racing engine. More camshaft and a higher compression ratio would have significantly upped the dyno numbers, but this is very strong performance for a pump-gas engine, with a very wide and usable powerband.”

The basic ingredients for this big-inch small-block include a Dart aluminum block with large, 4.165-inch bores, ported Edelbrock 18-degree aluminum heads (with 66cc chambers), a forged rotating assembly (with a 4.00-inch stroke), a roller cam (with big-block journal sizes) with 0.757/0.758-inch lift and 254/264-degrees duration at 0.050-inch, a Jesel beltdrive system, and a hall-effect crank trigger. Aspiration comes from a Kinsler EFI system that’s directed with a Holley control system.

“The look of the injector stacks is period-appropriate for the replica Cheetah,” Lohone says. “And the Kinsler system flows a lot of air, so it performs as well as it looks.”

Machinework and assembly were performed at Valley Performance, where Lohone works, while dyno testing took place at BES Racing Engines, in Southern Indiana, where the racing-engine specialist has a strong reputation for tuning Kinsler injection systems.

“Their dyno is known to be pretty conservative,” Lohone says. “But they really know their stuff with these injection systems, so we’re very pleased with the numbers we achieved, while BES founder Tony Bischoff noted it was one of the best-performing street small-blocks they’ve tested.”

More than the sum of its parts and dyno numbers, this distinctive small-block build includes a number of unique features designed to support high-rpm valvetrain strength and stability, as well as oil control. For oiling, Lohone employed a dry-sump system that drastically reduces windage by limiting the amount of oil in the pan, which is a custom-built unit from Kevco, with a full-length, louvered windage tray. There are also a number of strategically located oil drains in the heads and lifter valley to feed directly to the oil pan.

“It’s not just about the parts that generate the power, but the supporting components that help make the power sustainably and with long-tern durability,” Lohone says. “When you focus on the little things, such as optimizing the oiling system, the engine will perform better and live a lot longer.”

Those fine details are illustrated in the accompanying photos where the overall assembly and dyno testing are outlined. There’s a lot to learn here, from the build of what many would consider an archaic platform for building power, but with its LS/LT-challenging horsepower and torque production that neither modern engine family can touch, this old-school overachiever proves the small-block remains a viable and formidable performance option.