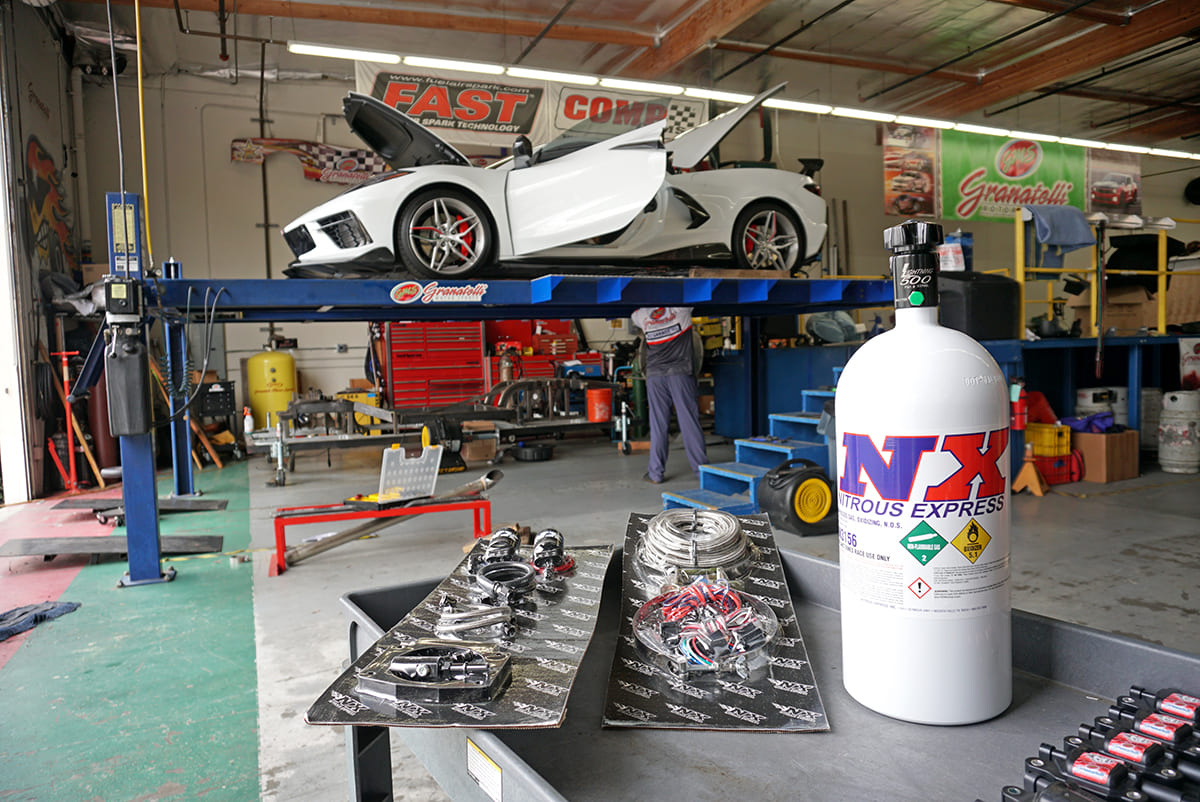 Nitrous and Other Tricks to Juice up the C8 Corvette

By Cam Benty – Photography by the Author

For most performance fans, the 2020 Corvette is just about perfect. With tons of horsepower cranking out from the mid-engine 6.2L LT2 powerplant, big sticky tires at the four corners, and an interior right out of a SpaceX rocket, there’s no reason to change a thing, right?

Well that’s certainly incorrect if you talk to J.R. Granatelli who took his $100,000 Corvette and started pulling off panels, engine components, and a lot of other stuff to bolt in a few very cool performance upgrades. His purpose was to not only dyno test the stock machine to determine rear-wheel power output, but to add some of his dyno-tested performance parts that have already proven to generate significant power increases on other cars with similar powertrains.

As if that weren’t enough, J.R. applied some further power-adder madness, the kind of crazy “what if” thinking that has powered many of his high-powered creations around speedways like the Indianapolis Motor Speedway. Yep, J.R. decided to “poke the bear” and pulled out a Nitrous Express nitrous kit, forcing that highly explosive gas into the virgin engine’s cylinders just to see what it would do. But that’s just J.R. Granatelli, we were to learn.

With only 1,200 miles on the odometer, the 2020 Corvette was deemed ready for modifications by owner J.R. Granatelli of Granatelli Motor Sports. For those who recognize the name, J.R.’s father, Joe, was at the heart of the famous Granatelli Racing team that was huge back in the USAC-sanctioned racing days, winning the famed race in 1969 with Mario Andretti at the wheel and again in 1973 with Gordon Johncock. You would be thinking correctly if you connected this team to the turbine cars that ran in 1967 and 1968, the whirling dervish of a machine running so fast around the Indy 500 Speedway that they were outlawed in 1969 even though the car had yet to win a race. Joe was integral in the creation of that race car, fitting the turbine engine and creating a competitive race car.

Perhaps the most publicly recognized member of the Granatelli team was Andy Granatelli, J.R.’s outspoken uncle who helped emblazon the STP logo onto everything from race cars to Richard Petty’s sunglasses. In the end, the Granatellis were to become part of racing lore for their on-track success and off-track antics. J.R. continues to wave the family crest for squeezing performance out of anything he touches and was excited to take apart his new car for a magazine article.

Step one of the test was to do a baseline on the Corvette using a Mustang Dyno that measures horsepower at the rear wheels. Step 2 would be to install a ported Granatelli throttle body and the one-two punch of eight Granatelli high-output coils and accompanying 0-ohm spark plug wires. The important part of the 0-ohm wires is that they reduce the power loss between the coils and the spark plug.

Finally Step 3 called for the installation of a Nitrous Express nitrous kit that included a couple of nitrous bottles that fit neatly in the “fronk.” For those not familiar with the new Corvette configuration, there is a rear trunk that is accessed by opening the rear decklid/engine cover and a smaller front-trunk that is accessible under the small hood.

Step 1: Baseline Power
As it comes from the factory, the LT2 engine is rated at 495 hp at 6,450 rpm. The torque rating is an impressive 470 lb-ft at 5,150 rpm. In recent magazine testing, there has been speculation that the engines actually put out more than 600 hp, so a check on the chassis dyno for a real baseline was in order. We were pleased to see that our engine, in three successive dyno pulls, achieved 419 hp at 6,411 rpm and 378 lb-ft at 5,471 rpm.

Step 2: Granatelli Ported Throttle Body Plus Plug Wires and Coils
Granatelli has been building engines and vehicles for many decades. With an in-house dyno ready to test for real-world results, each of the parts he sells is designed to deliver real power and driveability. The Malevolent coils are designed to put out 400 percent more power than the stock GM coils and are 50-state legal, according to Granatelli. Even on the Corvette, which is not the easiest to work on, the coils mount in original position as the factory units with ease. Best of all, they will not affect radio reception or emit any other negative frequencies that can affect other engine or comfort components.

The 0-ohm wires are thicker and clearly feature beefier insulation than stock, but, most importantly, they don’t limit power flow from the coil to the spark plug. In our testing, they repeatedly tested at 0 ohms on the voltage meter. For comparison, the factory wires were in the range of 1,700 ohms of restriction.

Finally, we installed a ported Granatelli throttle body that fits in the factory location and uses all of the original throttle body pieces, including the solenoid motor and original throttle blade. The difference is really in the shape of the venturi, Granatelli removing an interior restrictive ridge and smoothing the overall shape for increased airflow. While not 50-state legal, the engine ran without obvious changes, the factory computer able to adapt for the increased airflow.

In all fairness, we should note that the Nitrous Express injection plate was also in place for this test, the added fuel and nitrous openings closed to the outside. The plate is about 5/8-inch thick so its ability to act as a plenum power improver is highly questionable.

Step 3: NX Express Nitrous Kit
The kit utilized in this test came from Nitrous Express and included all of the things needed for the install with the exception of some of the wiring to fit our application. We were able to fabricate what we needed to make it fit with a minimum of fuss.

The kit we purchase places a pair of bottles in the “fronk” as noted earlier. Holes were poked through the liner to allow the nitrous supply line to reach the engine in the rear. The braided steel line ran under the body and due to the elaborate nature of the under-body panels that seal the chassis from the elements, there are many places to tuck this line. After routing the line through the chassis, over the ECM (in the center hump under the car), and up through a larger hole in the forward section of the engine compartment, it connected neatly to the junction that mounted above the fuel solenoid that mounts upside down on the driver side of the engine. The solenoids are not sensitive to the direction, which is great for this application.

The nitrous solenoid mounted to the passenger side of the engine in virtually the same style with the braided steel delivery lines connecting to the nitrous plate that, as noted, fits under the throttle body. Longer bolts are included with the nitrous plate to help mount the throttle body and plate without issue. O-rings are featured on both sides of the plate, creating a leak-free seal.

Power for the solenoids comes from a “keyed on” connection on the fuse panel in the “waterfall” panel that separates the two front seats. One of the tougher challenges was finding a way to trigger the nitrous at full throttle—that required a few head-scratching moments. The problem is that the throttle system is fully computer-controlled so finding a throttle linkage connection that works—well, that’s just not happening because such a connection does not exist. Granatelli circumvented the problem by placing a switch below the throttle pedal so that once full throttle is reached, the nitrous is triggered—as long as the arming switch on the console is in the “ON” position.

Baseline and Beyond For Step 2, we installed the three Granatelli Motor Sports parts noted above, spark plug wires, Malevolent coils, and ported throttle body. The unknown was the ported 95mm throttle body, the spark plug wires, and coil components that Granatelli has become known for over the years. Again, using the three test pulls we achieved a peak power figure of 477 hp at 6,300 rpm and 434 lb-ft at 5,387 rpm—a total of 58 hp and 56 lb-ft gain! A closer look confirmed these are the same gains Granatelli saw on a 2017 LT1 Corvette they recently tested. That car gained 27 hp and 31 lb-ft using the stock throttle body. Typical gains with ported throttle bodies yield 22 hp and similar torque numbers.

For Step 3 we installed the Nitrous Express throttle body late system and 0.052-inch nitrous jet with a 0.027-inch fuel jet for a calculated gain of 100 hp. With the bottles open, the arming switch ON, and other connections secured, the nitrous is triggered and the dyno test results noted. As expected, the power increase was almost exactly 100 rwhp. Of note was the difference in the engine timing that was noteworthy with regards to increased power shot plans. Check out the dyno sheets for full details.

Granatelli noted that we could have gone higher as the Nitrous Express kit included proper jetting for a 250hp gain but a few things stopped him: one, we were using the stock transmission, which might have been damaged; and two, GM is not keen on letting the aftermarket play with the tuning on these powertrains. We are aware that the software that operates the new Corvette is actually owned by GM regardless of who owns the title for the car. With the 100hp jetting option, we were safe to make run after run without requiring any tune changes, and that includes adjusting plug gapping and timing retard. We did none of it. We left the gap at a factory 0.042 inch with the stock heat range as well.

Typically, when pushing past 100 hp with Nitrous systems you want to run two heat ranges, colder spark plugs, and shorten the gap to a maximum of 0.032 inch. For safety, you should also retard the timing 2 degrees per 50 hp gain after the first 100 hp is achieved. Had we tried the 150hp gain jetting for sure we would have shorted the gap on the plug and dropped the heat range as suggested. Interestingly, J.R. said, “The ECM did retard the timing 1 degree on all confirmatory nitrous pulls, and when we turned off the nitrous it automatically put the degree back in.”

In the end we were extremely happy with the power output from all stages, including the factory baseline. The new Corvette is a rocket that will be fine for some, but for others there are some things that you can do to help performance. Whether you choose to simply add the Granatelli coils, plugs, and throttle body, or go wild and plumb in some nitrous, the rewards are many.