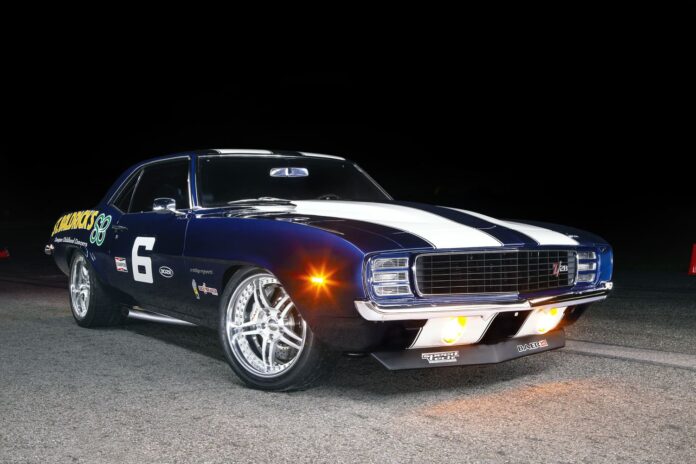 Automotive tastes come in various forms and are often influenced by those around us.  For many of us, once that interest is ignited, a lifelong journey begins. In Lou Jasper’s case, his late Uncle Joey ignited his passion for all things automotive. He recalls, “When I was about 5 years old, he pulled into our driveway in a ’71 ’Cuda. It had a 440 with a six-pack and I thought it was the greatest car.” By 15 he was wrenching on a 400 small-block to drop into a ’77 Chevelle, however, at that age his mind was set on something smaller and lighter, and he eventually landed a Fathom Green ’69 Camaro. “It looked good from about 20 feet,” he explains. “It had rust in the quarters and floor and the trunk was rusted out.” He eventually put the restomod-flavored Camaro on the road with the 400 and often indulged in some drag racing at Maryland’s 75-80 Dragway. It saw very limited use during his college years, and it wasn’t until his family and career were in place that he was able to get back to it. A new house allowed him to finally store the car, but a month after moving it there, he went for a ride and parked it at a train station–that was the last time he saw it. “I parked it there for the day, when I came back it was gone,” he recalls. That theft was devastating, and as a result his appetite for most things automotive soured. 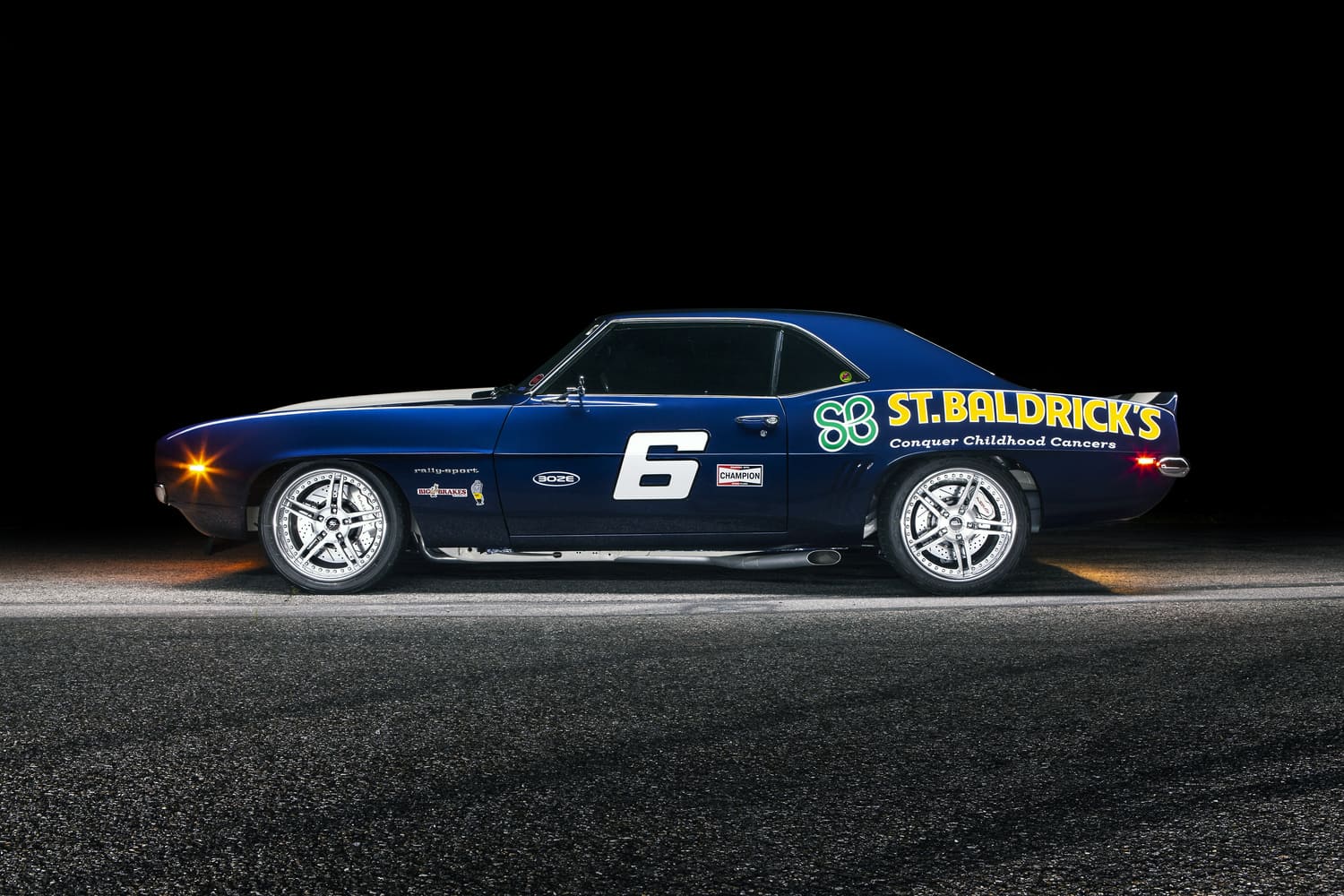 After a decade away, his wife, Michele, once again ignited that flame with another ’69 as a birthday gift. “She bought it because she knew that I loved my first ’69 and that I was heartbroken when it was stolen,” he explains. “We knew building the new car would be a great opportunity to bond with my sons, Kyle and Landon, and to teach them how to work with their hands and minds. We just planned to restore it and have fun driving it.” As fate would have it, she found another Fathom Green ’69 Camaro that was RS flavored. Its condition mirrored his previous one with the same rust issues. They completely dismantled the car and began a rotisserie restoration in their home garage. He recalls, “My boys and I completed extensive metalwork on the structure, frame, and body. We also began restoring all the mechanicals and rebuilding the engine.”

A casual encounter in 2012 drastically altered his direction. He recounts, “I met Brian Garfield at my wife’s high school reunion. We were talking about racing and my restoration project and he asked if I considered SCCA Solo.” At the time Garfield was on the SCCA’s Washington D.C. Region (WDCR) committee and was instrumental in pointing Lou toward the C-Prepared (CP) category. That category was a struggle for Lou because most CP cars are not streetable when fully prepped and he didn’t want to alter the iconic look of the ’69 Camaro. In late 2013 the SCCA introduced the Classic American Muscle (CAM) class for 2014. It was a perfect fit because it allowed for almost unlimited upgrades without sacrificing the identity of the car. Having charted his path, he found plenty of information on the Pro Touring forums and websites, however, his biggest source of inspiration came from the Penske Camaro campaigned by Mark Donohue in the Trans Am series in 1969, along with the “Blue Maxi,” which was a project between Car and Driver magazine and Penske’s racing organization in an effort to create the ideal American GT. 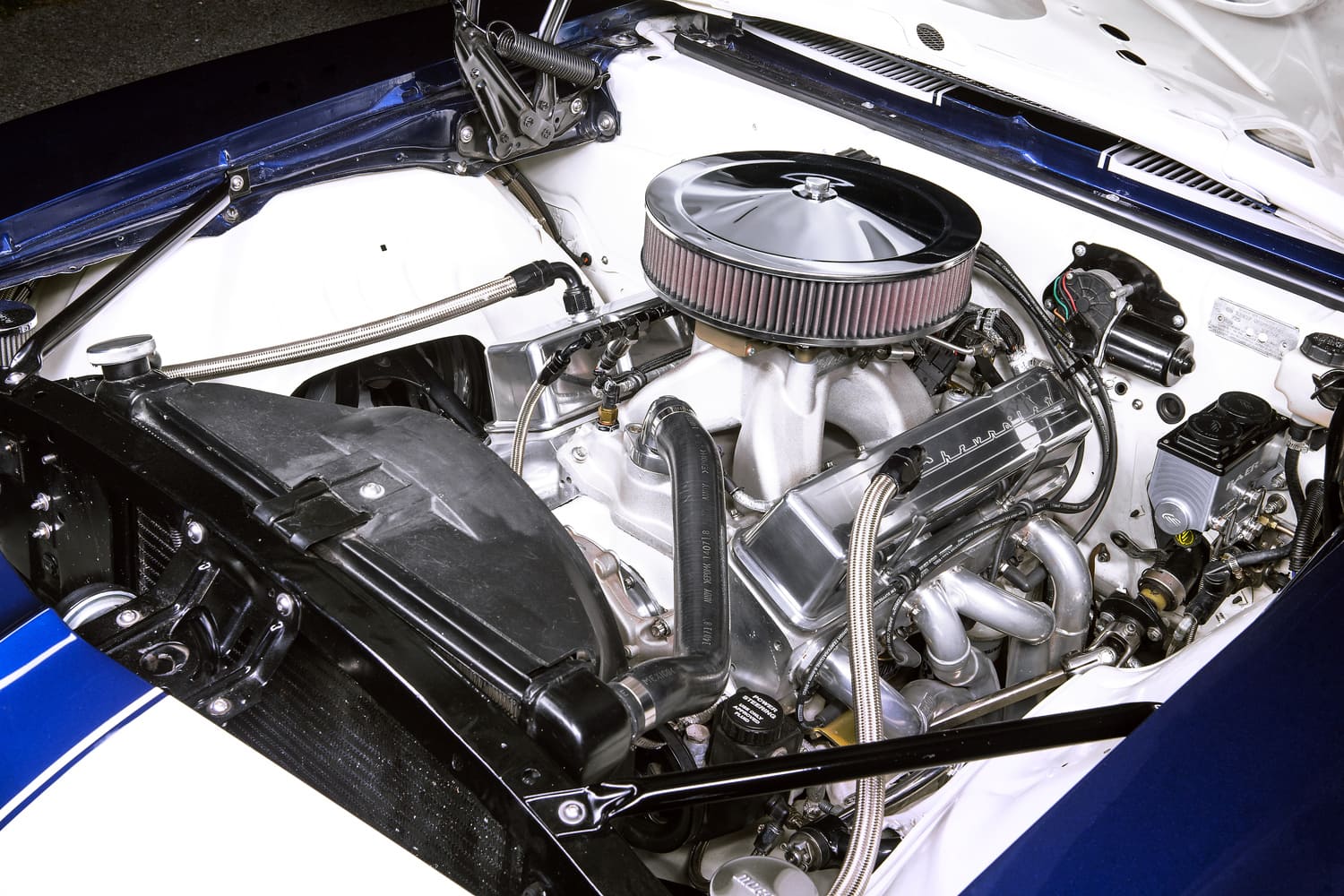 Toward the end of 2014, with the bodywork finalized, the Camaro reached the paint stage. Blue was the desired choice and he settled on a shade of blue from Sherwin-Williams called Deep Blue Metallic. From there the emphasis shifted to the suspension and weight reduction. For that he retained the reinforced stock subframe but added weld-in connectors from Detroit Speed and 16-gauge steel reinforcements to a few stress points on the unibody structure, along with a set of custom-fabricated rear wheeltubs. The suspension plan focused on handling and fitting the most rubber possible under all four corners. Attached to that front frame were Speedtech Performance A-arms, CPP spindles, Viking dual-adjustable coilovers, Unisteer power rack-and-pinion, and a Hotchkis antiroll bar, while the rear was treated to a set of Viking Crusader dual-adjustable shocks, a Hotchkis antiroll bar, and a modified SpeedtTech torque arm. This combination’s main purpose was to allow the fitment of the Boze Lateral-G wheels and Yokohama Advan A052 skins. Up front they measure 18×9.5 and wear 275/35R18 rubber, and out back they measure 18×11.5 with 315/30R18. Braking was sorted out with Baer hardware at all four corners with their Pro Plus 14-inch rotors and six-piston calipers up front, while at the rear SS4+ 13-inch rotors and four-piston calipers were fitted. 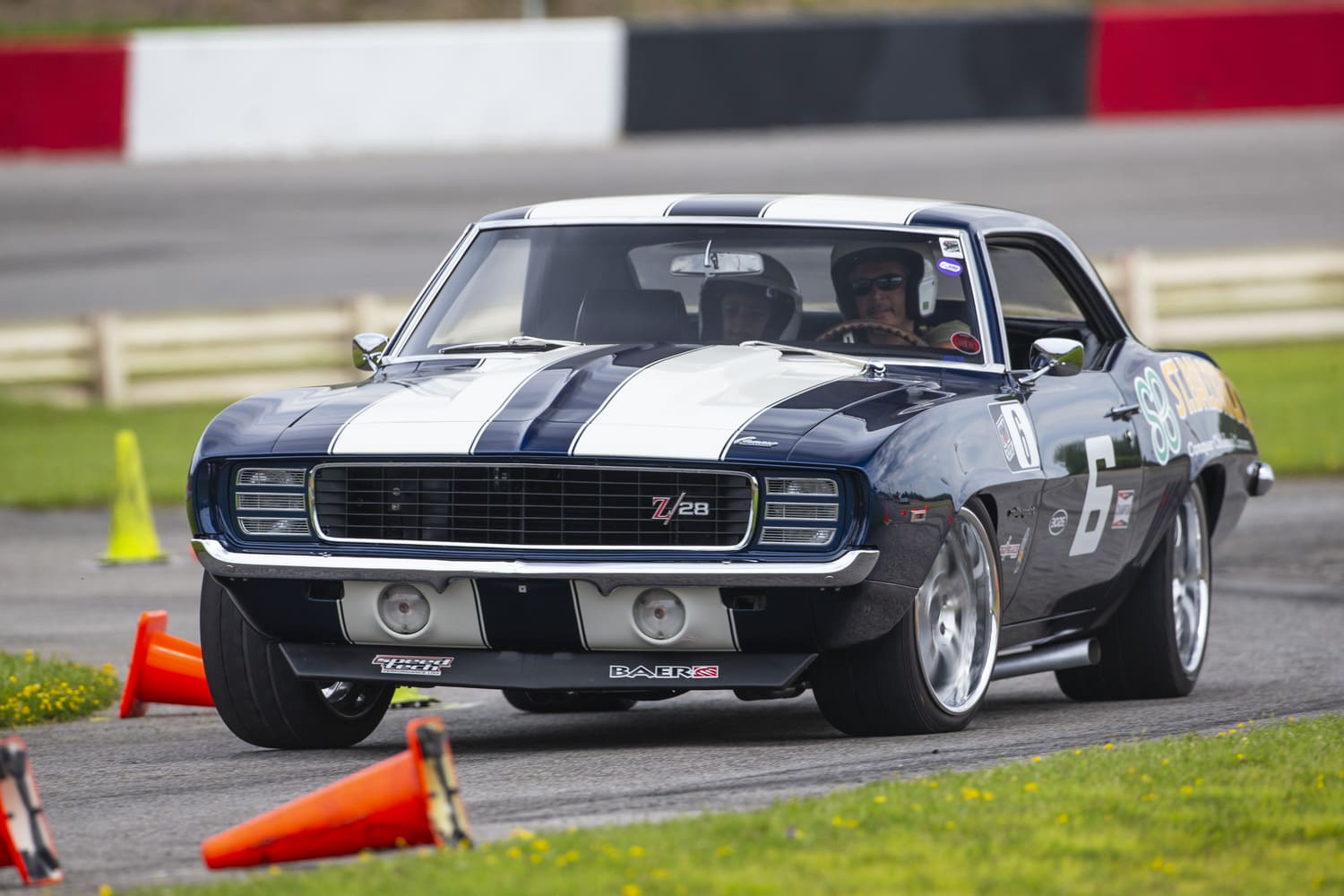 Weight reduction was a constant, so items like the AC were deleted, while the steel hood and lower valance gave way to AMD aluminum replacements. Those weight savings also carried over into the interior. He replaced the stock seats with Procar units stitched in a comfort weave to mimic the factory look. The rest of the original Midnight Green interior was also swapped out with new black replacements. Auto Meter gauges and a Grant steering wheel with a removable steering wheel hub were also installed. 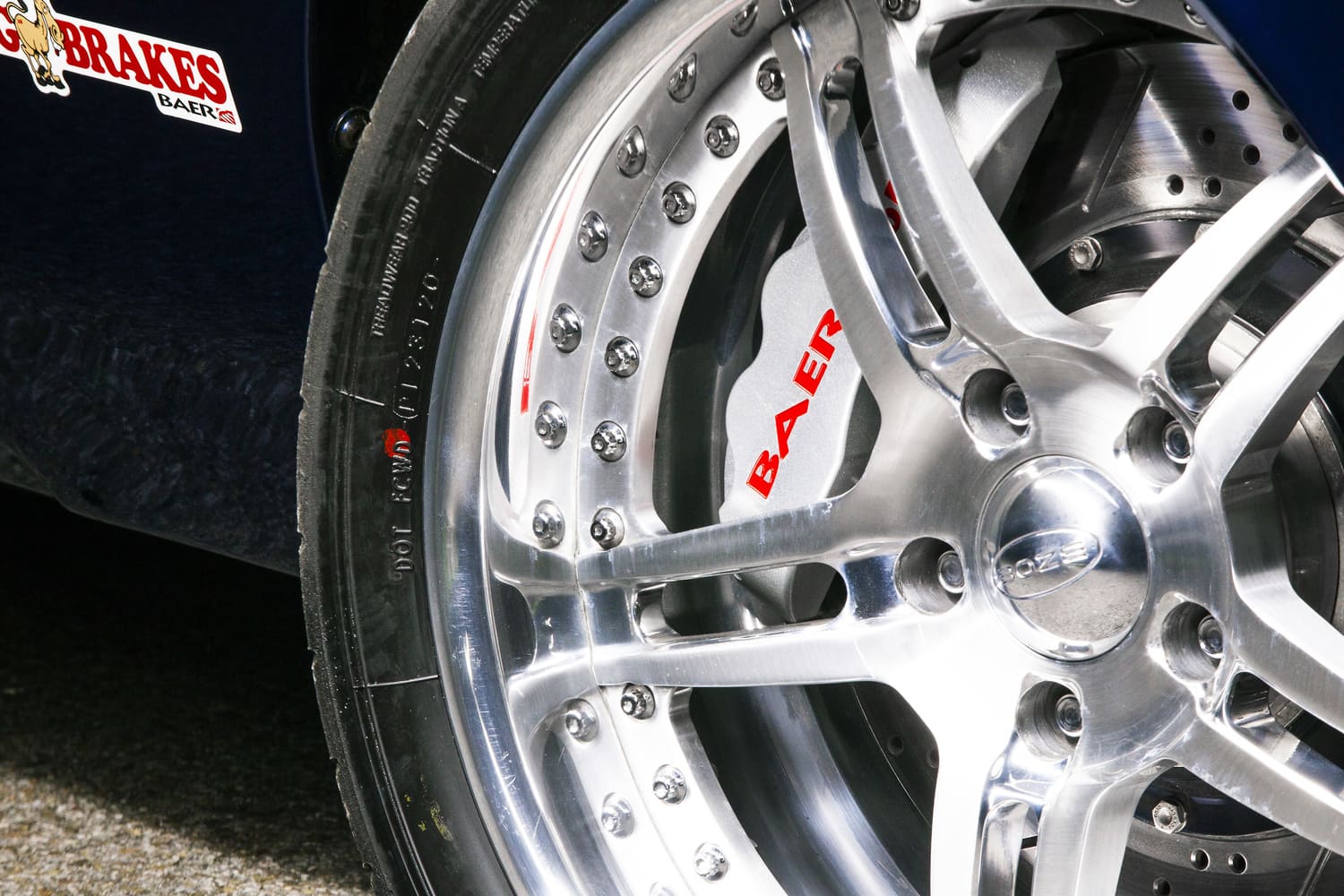 Underhood the 350 was in exceptionally good condition with some mild aftermarket upgrades, however, the single-plane intake and oversized carb weren’t suitable for track use. Like the rest of the car, it was also given a refresh that Lou performed in his garage. The addition of a dual plane intake and the appropriately sized carburetor and headers were a game changer. When it came to a gearbox, the stock TH350 never factored into the equation, so he went with a TREMEC T56 Magnum six-speed. In 2017 the 350 was retired. It had served its purpose by giving Lou a runner-up spot in the WDCR region CAM class in 2016. The new mill started with a 400ci Dart SHP block fitted with a Callies forged rotating assembly, including H-beam connecting rods and ICON forged aluminum pistons. Induction was upgraded with either an Edelbrock Super Victor 2 intake with a Holley Terminator Stealth EFI or a modified Offenhauser Cross Ram with a pair of 950-cfm Terminator Stealth units. The last item on the drivetrain list was the rear. For that he opted to go with a Redbird Speed Ford 9-inch full-floater stuffed with 4.30:1 gears, Wavetrac limited slip, and 35-spline Moser axles. Dynatech MuscleMaxx headers handle exhaust duties with 3-inch stainless round tubing mated to a pair of MagnaFlow mufflers for the street, while 3.5-inch Stainless oval pipes with side exits are used for track days. 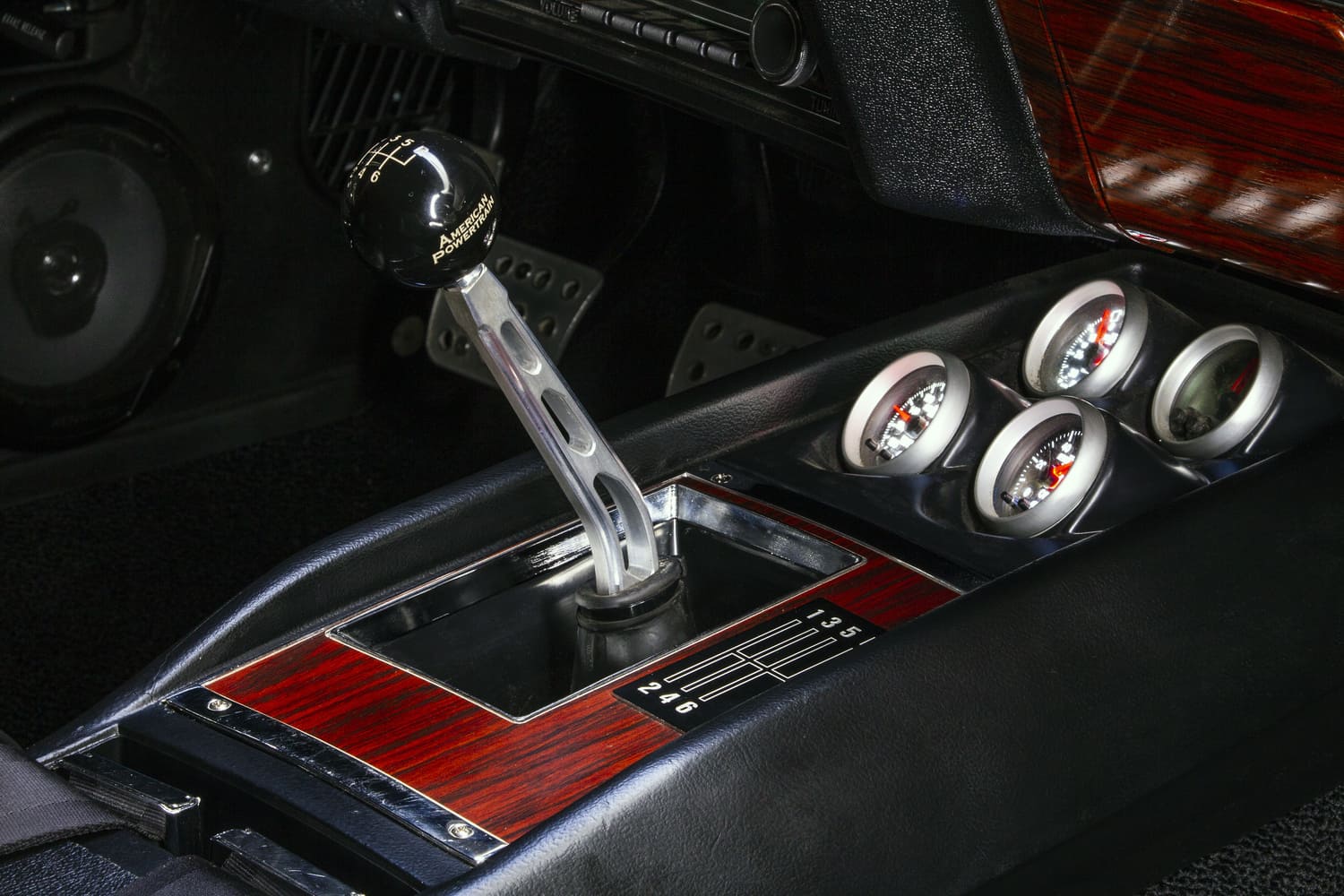 Beyond the competition, the Camaro has also been used to raise cancer awareness for the St. Baldrick’s Foundation. “My wife saw a story in the paper of a girl who needed a bone marrow transplant,” he explains. “We were moved by the story and went to see if we were suitable donors. We weren’t, but we began volunteering at annual fund-raising events and have continued for the last 11 years. The car’s graphics are designed to be reminiscent of the Penske ’69 Camaro, but now represent a cause we deeply care about.”

The Camaro is a work in progress, with future plans calling for a rollcage and more performance improvements to make the car even more capable in a wide variety of racing events, while keeping it as a family oriented endeavor.