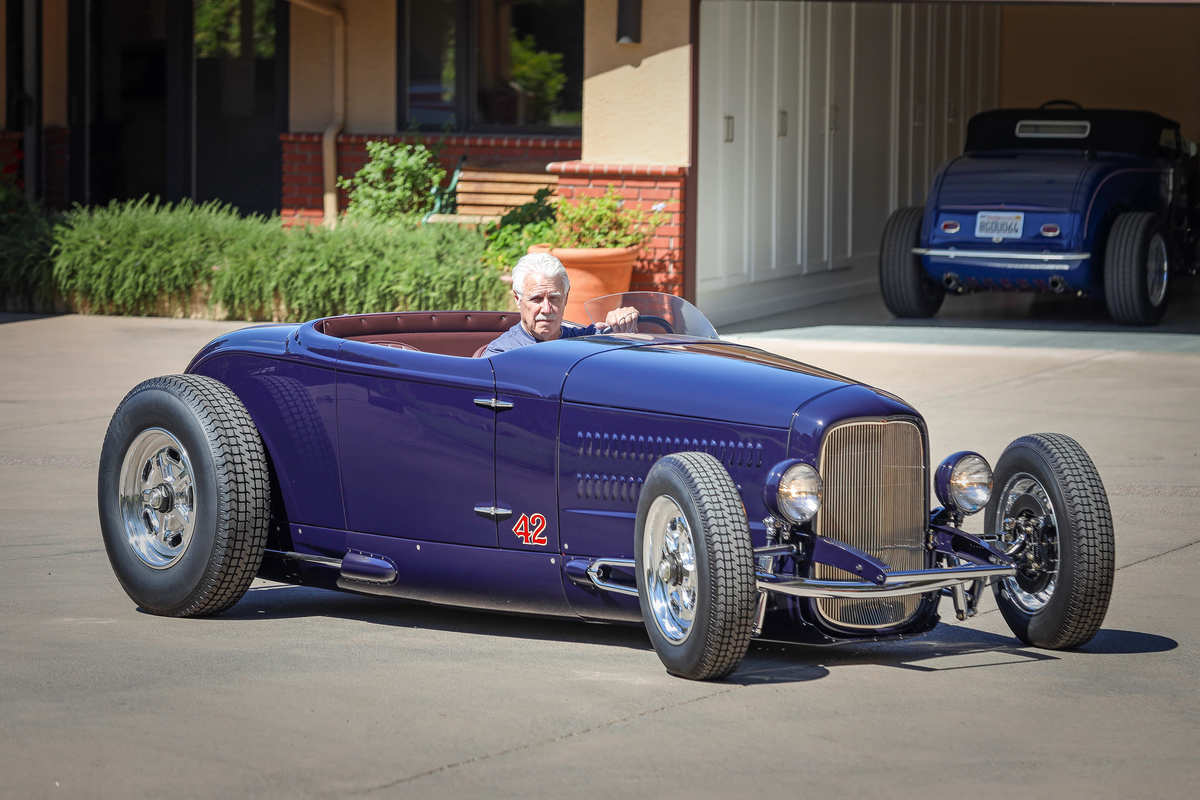 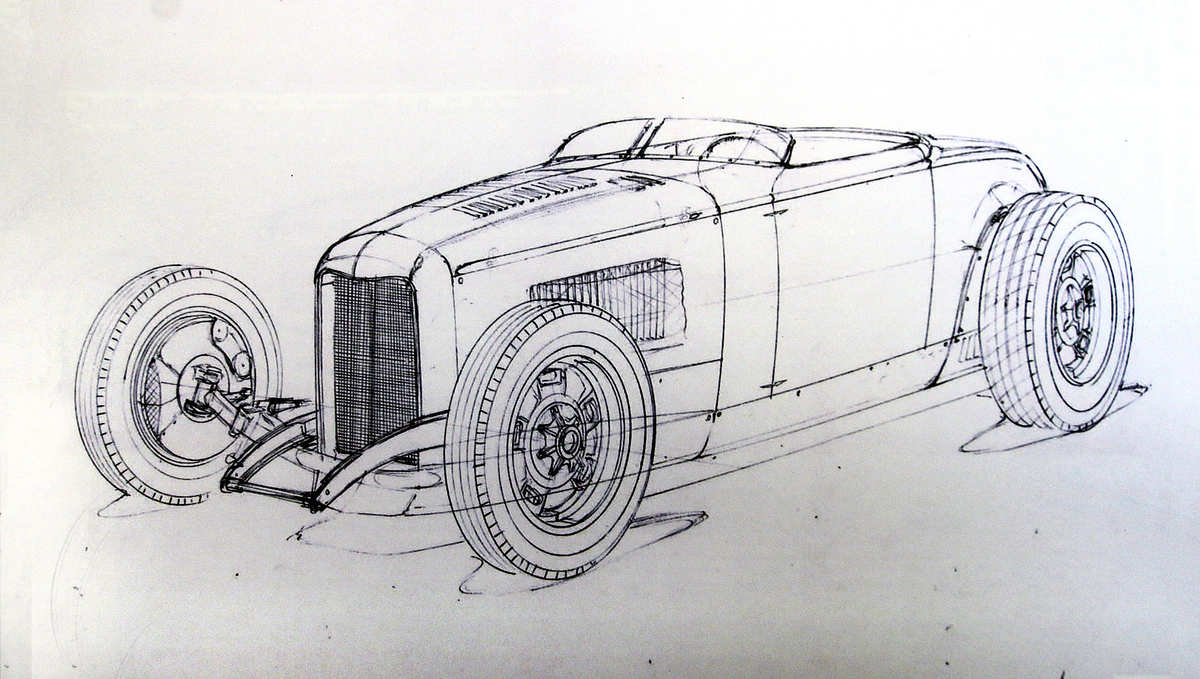 Just about the time you think there’s nothing left to do, tastefully, to a 1932 Ford roadster you see something that makes you rethink your thoughts. Such is the case with Bill Grimsley’s (Sausalito, California) Deuce channeled roadster masterfully constructed by two longtime friends and accomplished hot rodders Jackie Howerton (Tulsa, Oklahoma) and Steve Moal of Moal Coachbuilders (MC in Oakland, California). Howerton and Moal are no strangers to building hot rods and being longtime friends; and both being friends of Bill a collaboration just made sense. 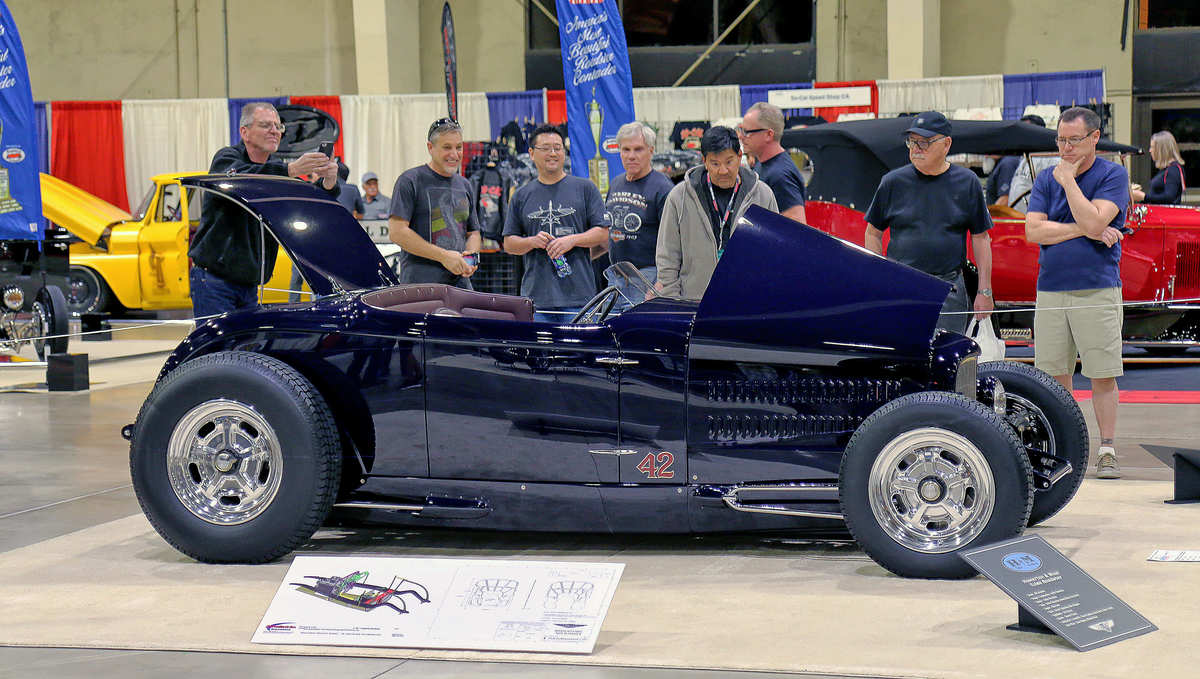 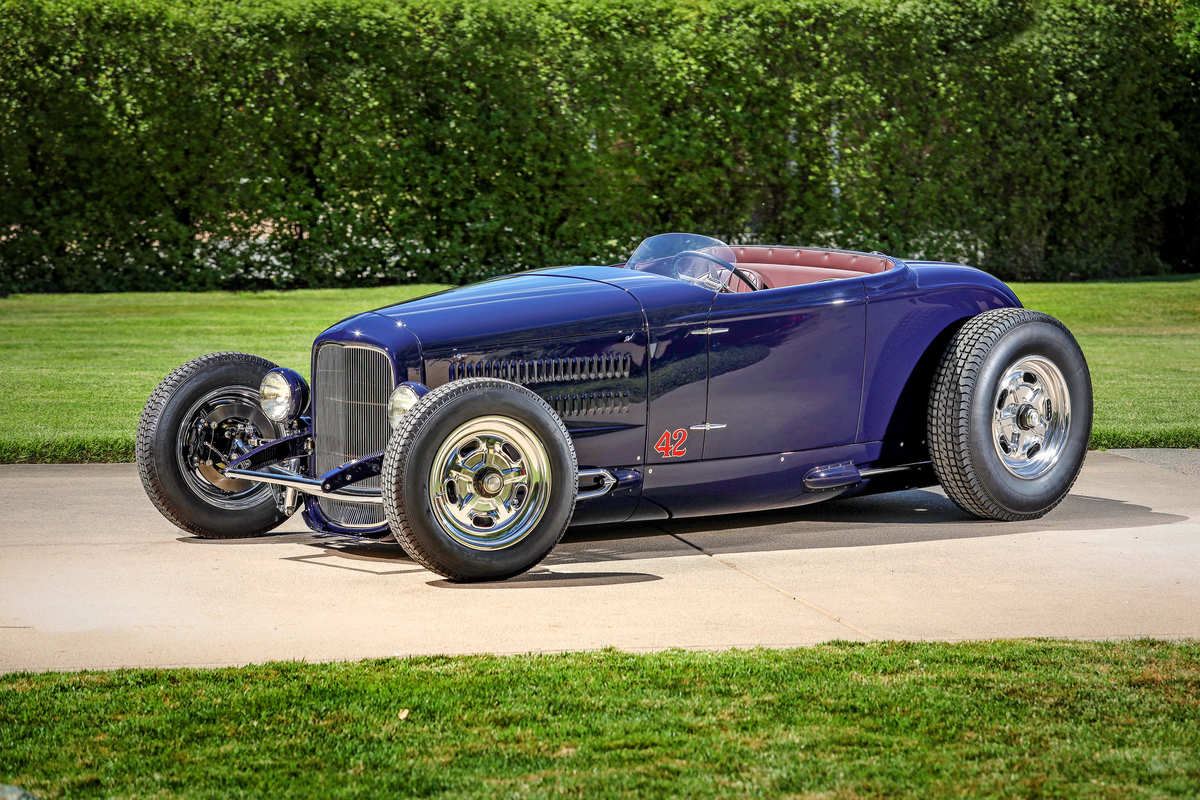 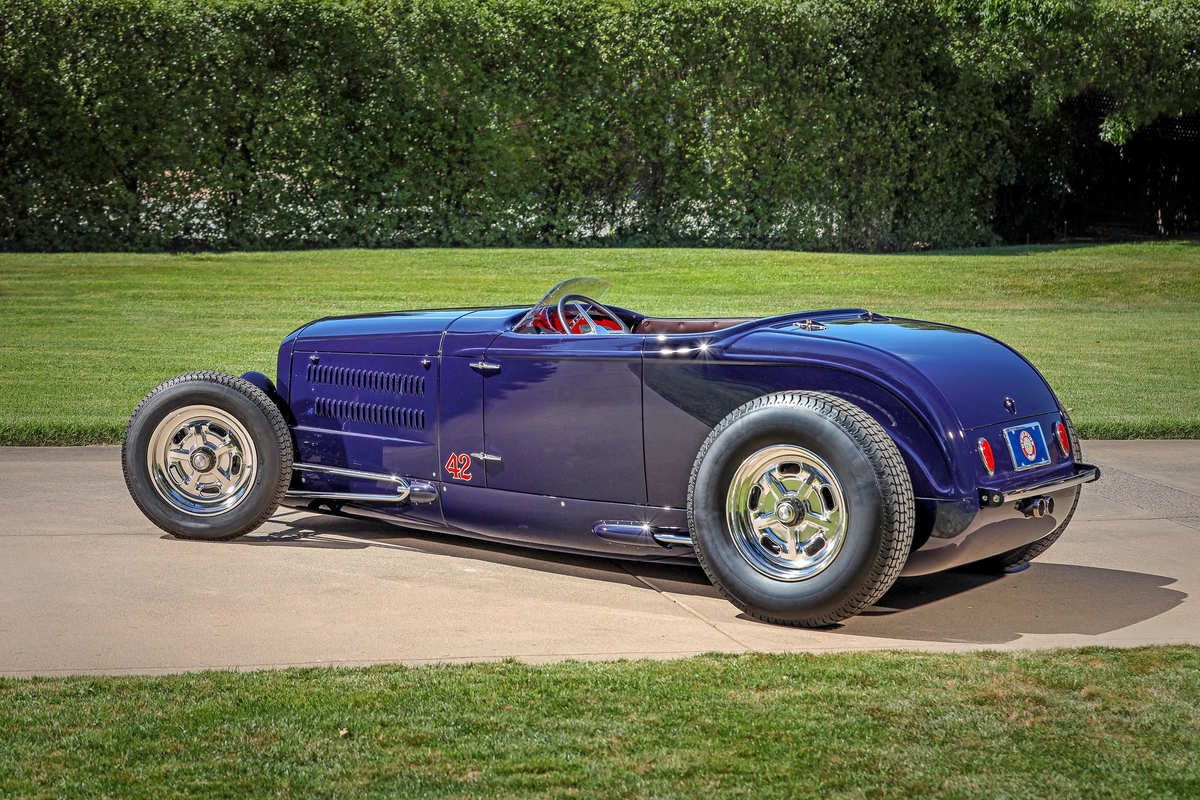 If you have an inkling that you may have seen this roadster before it’s likely you have as it was in the America’s Most Beautiful Roadster competition back in 2019 at the Grand National Roadster Show in Pomona, California. Oftentimes, hot rods of this caliber cannot be viewed in one pass. It takes time to look, look some more, walk away, come back, and look some more. There’s no denying that you will see something new each time and it’s then you will begin to fully appreciate the build. After each once-over you will understand why something was done and you will begin to see the emerging theme and how it flows from one point to the next. 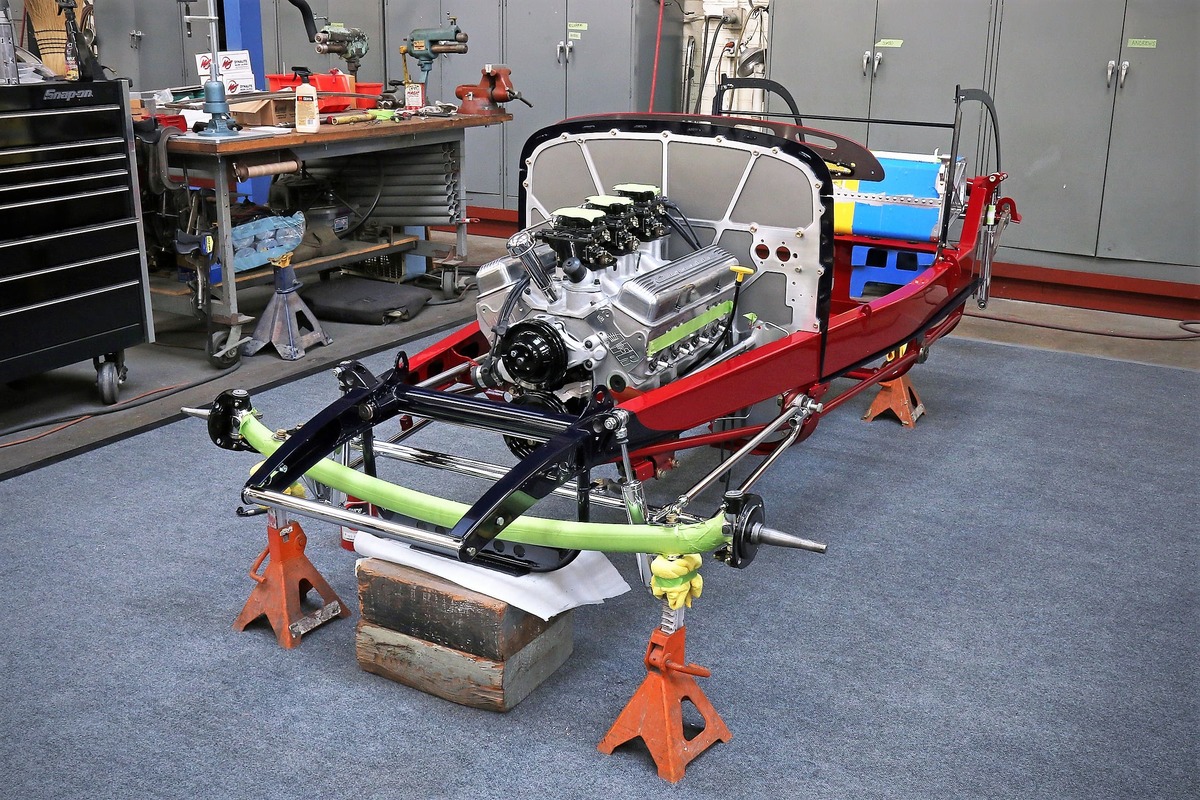 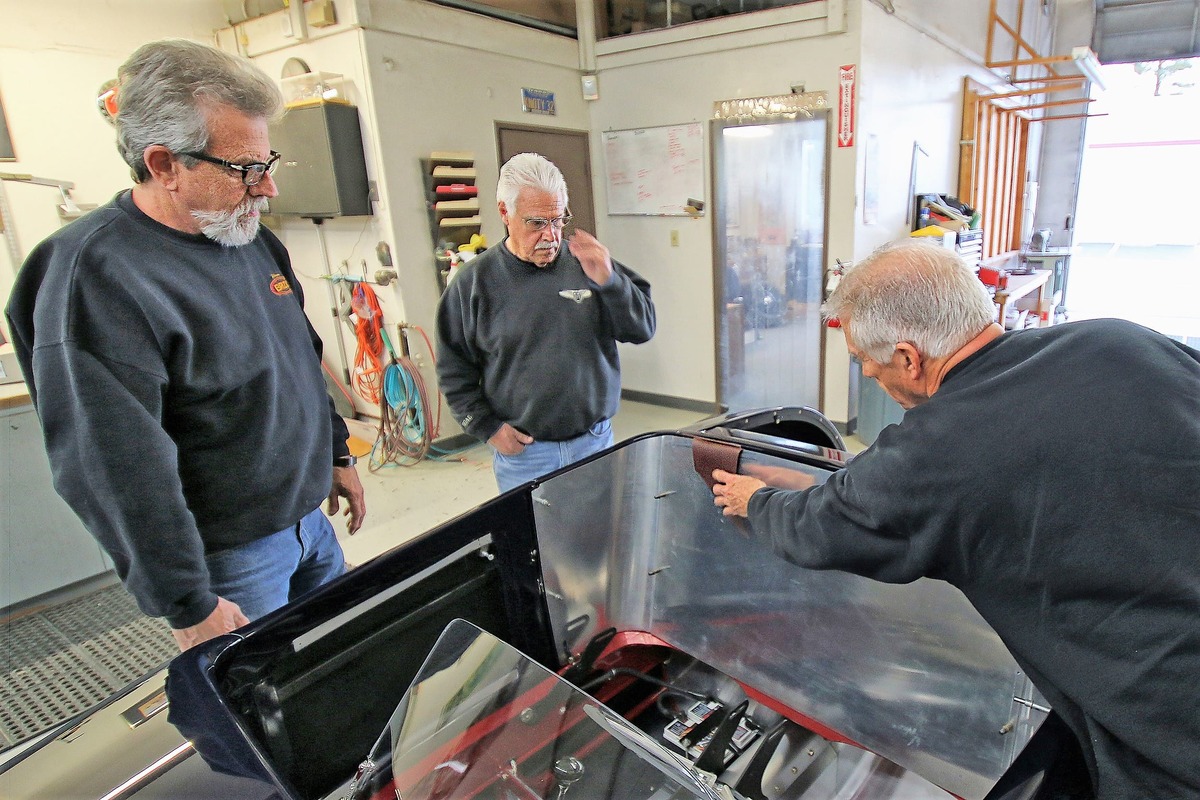 Bill, in working with Howerton and Moal and the artist Alberto Hernandez, developed the concept whereby the combined American hot rod theme (think Moal) and the race car appeal (think Howerton) was brought to fruition. As mentioned earlier, the build was a collaboration with Howerton handling the design, chassis, suspension, and body support structure fabrication. All of this work was done at his shop in Oklahoma. While this was happening Moal and the staff at MC, comprised of sons David and Michael, and craftsmen Troy Morris, Shane Lindsay, and Robert Smith, worked their magic. MC was responsible for the body construction, final fabrication, machining, paint, assembly, and wiring. Thus the overall build completion was handled at the California shop. 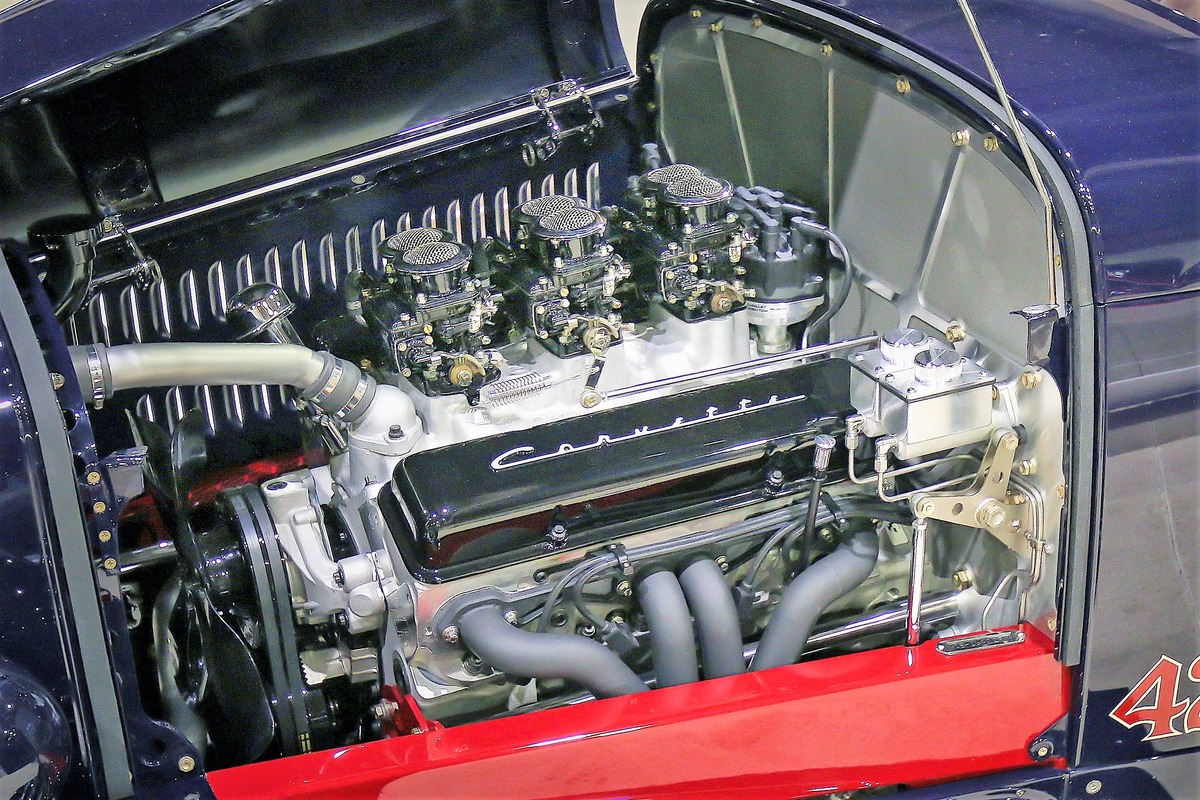 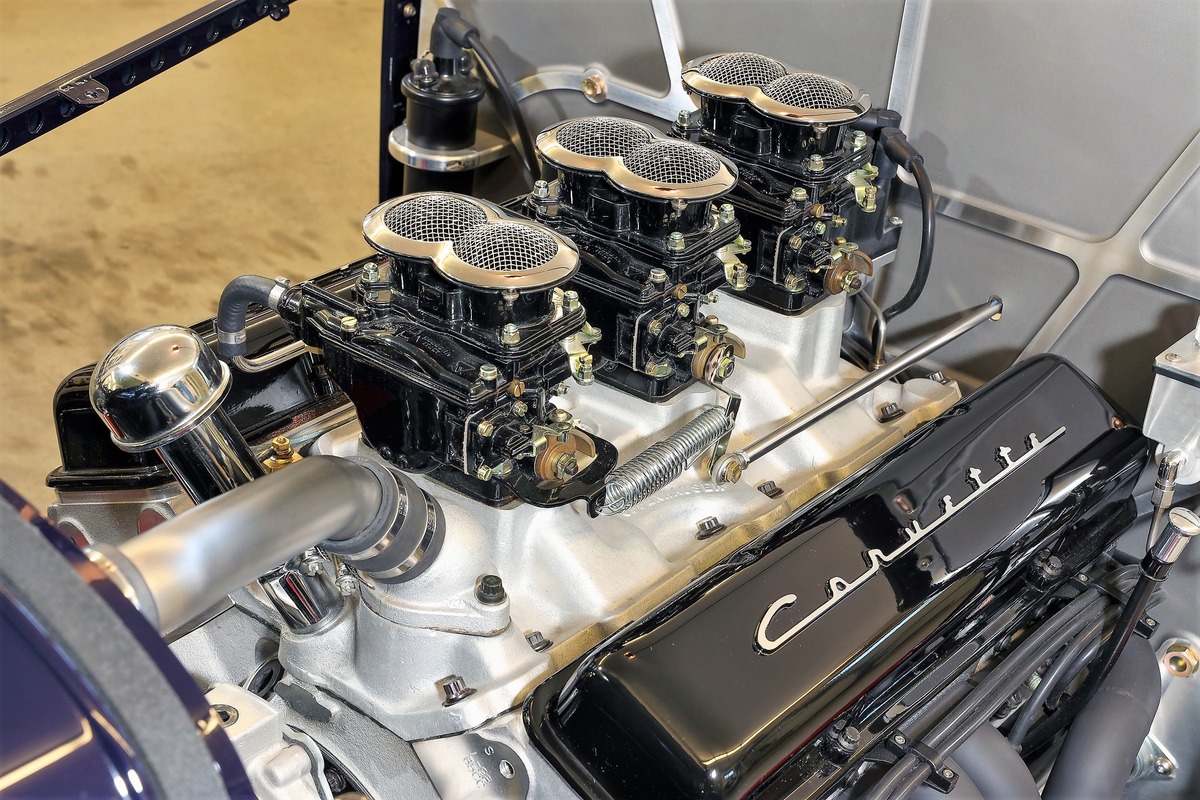 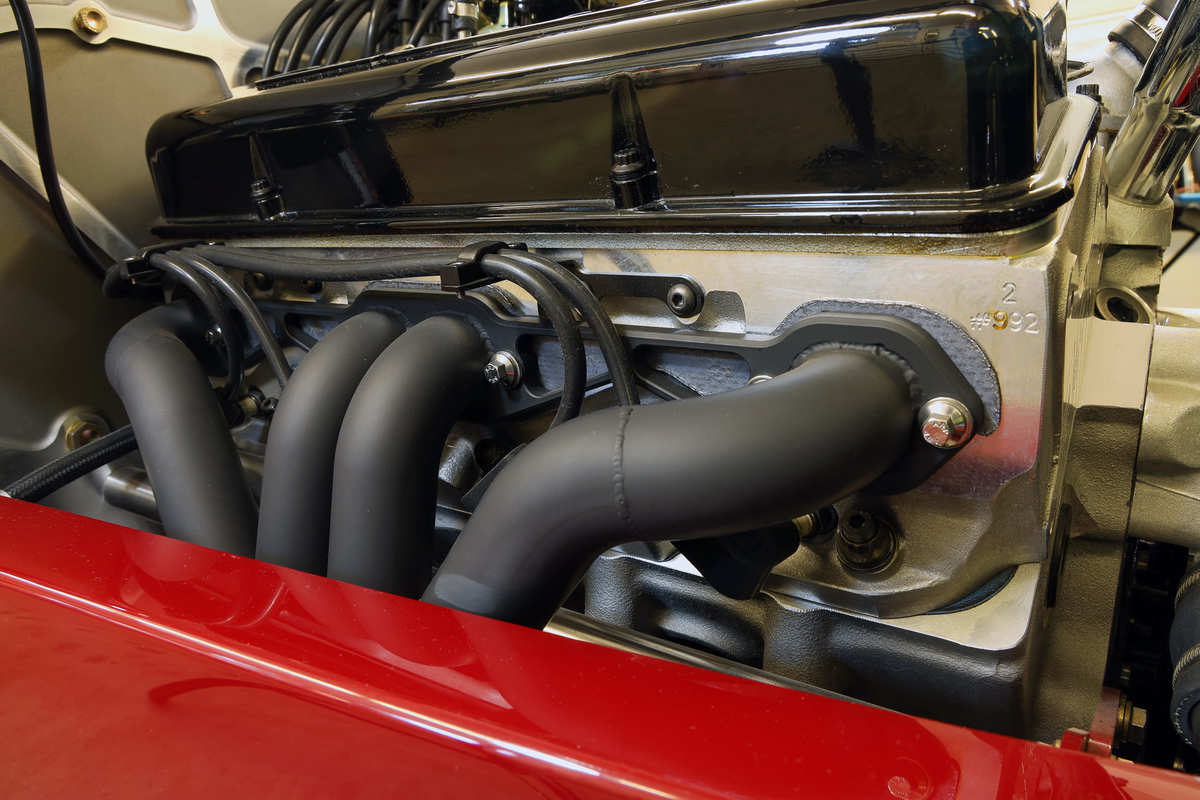 Before looking over the chassis and the body let’s take a look at what’s generally the focal point of any hot rod worth its attitude … the powertrain. The engine is Chaz Roaz–built Chevrolet Bowtie 350-inch aluminum block with a splash of history and performance through the use of a Duntov solid-lifter cam and Offenhauser three-deuce intake manifold forming the foundation for the 500-plus horsepower V-8. In true MC fashion, you knew there would be a touch of European sporty car influence; this time it takes the form of three two-barrel Maserati Weber carburetors. The Webers are topped with custom air cleaners from the workbench at MC. Making sure the fuel is ignited, the spark begins its journey with an Optima battery, charged by a Powermaster alternator, while a Tilton mini-torque starter moves the juice along to the MSD distributor and coil with Taylor primary wires. Spent gases exit through the MC custom headers and exhaust system beginning with 1-3/4-inch primary tubes opening up to 2-1/2-inch mild-steel tubing running in and out of a pair of DynoMax Performance mufflers. Holding onto the required thirst-quenching gasoline is a handmade and machined and riveted aluminum 18-gallon tank. 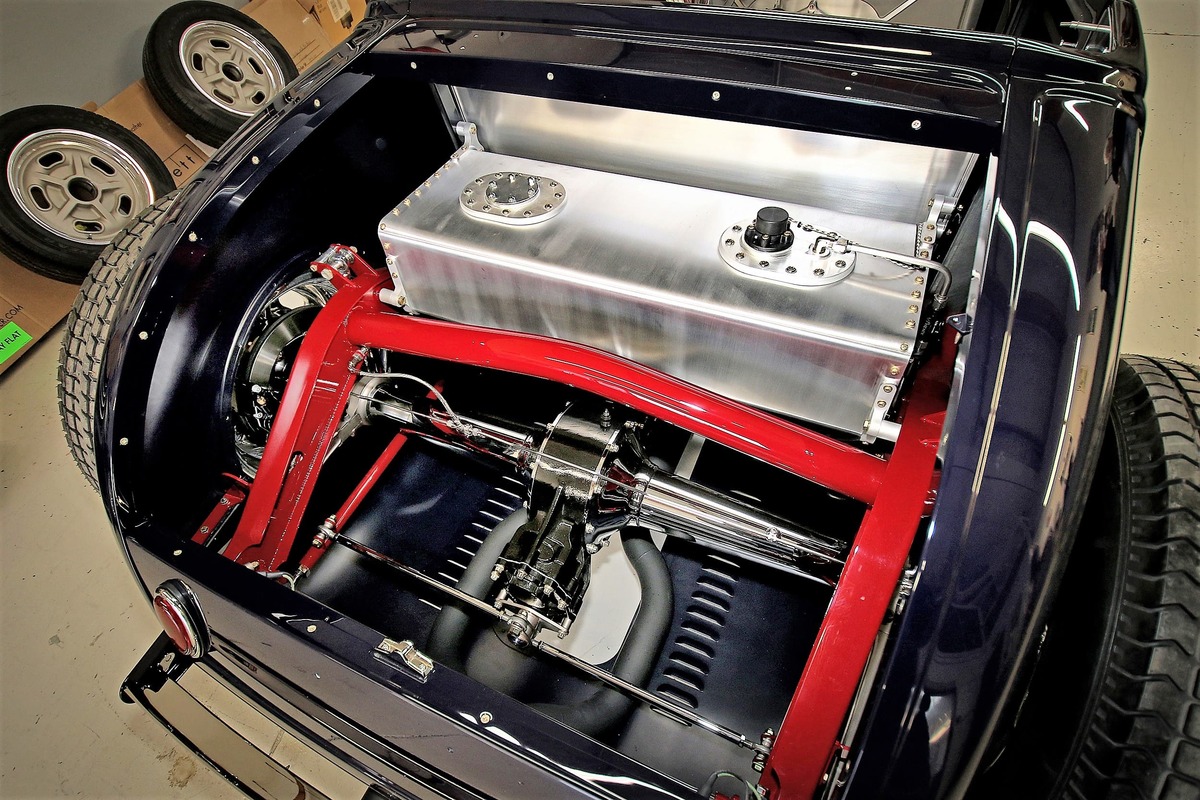 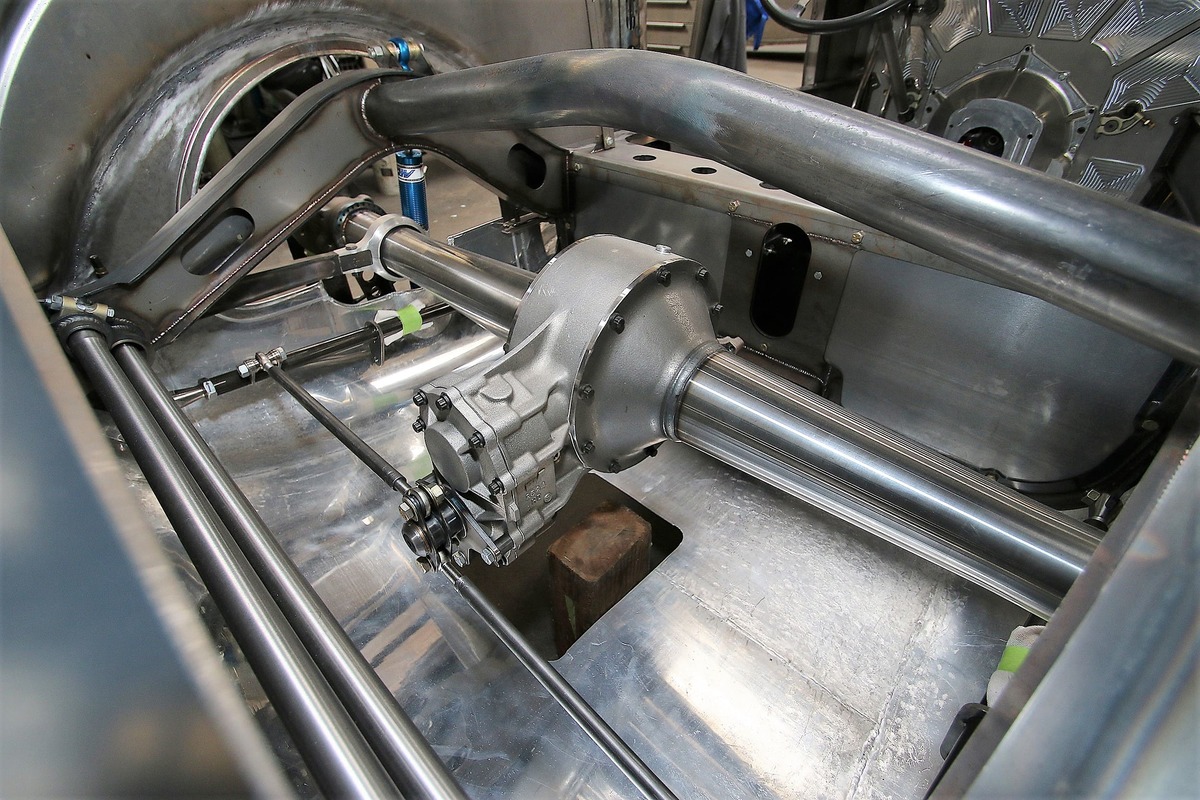 Moving all this horsepower and torque to the rear wheels is a TREMEC TKO 500 five-speed through a Chevy flywheel, pressure plate, and clutch disc. From here an MC custom handle and mechanism select the proper gear. Linking the trans to the Halibrand quick-change rearend equipped with 4.11 gears and Currie axles is a Custom Driveline Service driveshaft. Other rearend suspension appointments include the AFCO shocks, Howerton torsion arms with custom uni-ball mounts, a Watts link, and Wilwood rotors with Dynalite calipers. The Wilwood dual-reservoir master cylinder is pressed into service by the custom pedal assembly from Howerton. Allowing the chassis to roll on down the road is a set of ET Kidney Bean–style wheels measuring 16 inches in front and 17 inches in back, all wrapped with Excelsior rubber measuring 5.50-16 and 7.50-17. 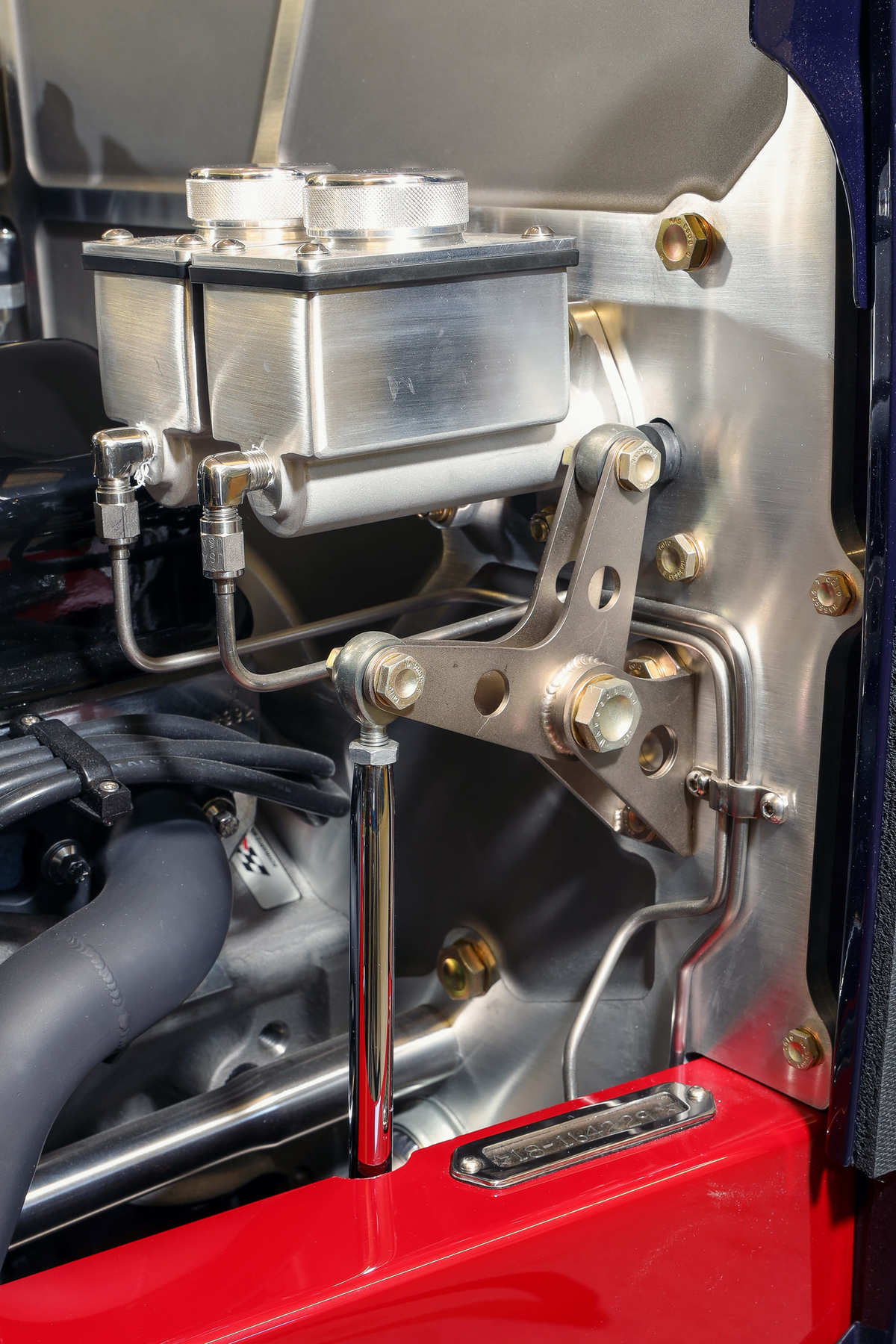 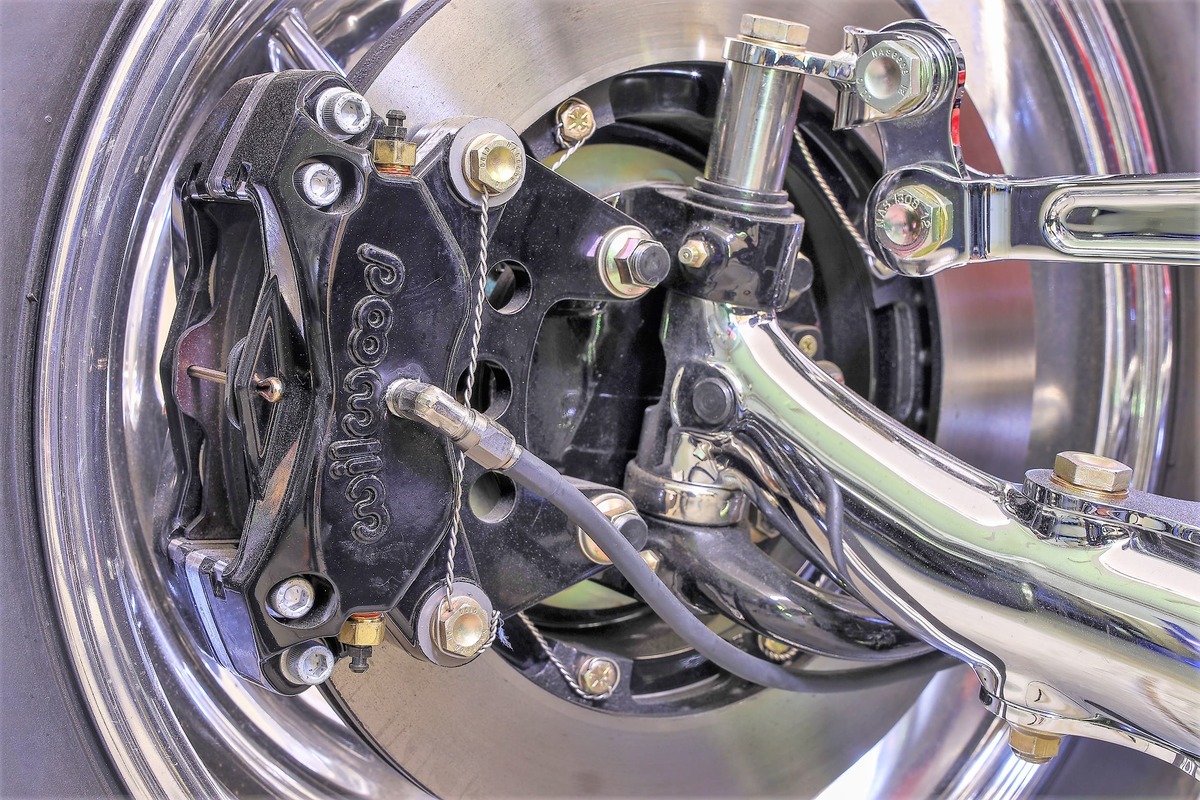 From the Howerton chassis table comes the hand-formed framerails as well as the crossmembers. Leading up front is a 1937 Ford tube axle outfitted with early Ford spindles, AFCO shocks, and torsion bar suspension. Steering works its way through a Saginaw 525 box with a 14:1 ratio controlled by a Howerton custom-made steering column topped with an MC four-spoke Sprint Car–style leather-wrapped wheel. 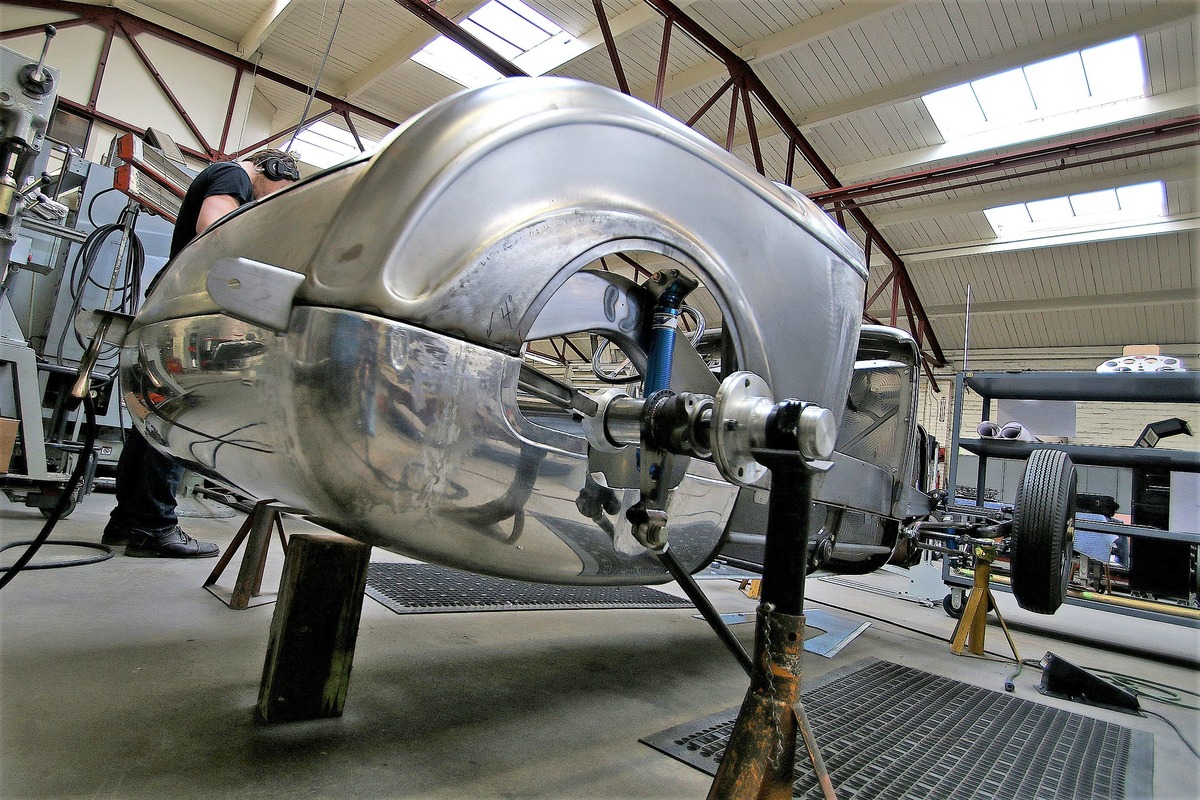 The 1932 Ford roadster body, combination of steel and aluminum, features a number of custom touches, making it truly unique. Resting underneath the PPG Blue hue is the flawless body- and paintwork all expertly handled by MC painters Mike Wenger and Darrel Schneider; MC also received the nod to fabricate the aluminum hood, under pans, rear roll pans, and decklid. The steel body was narrowed and sectioned and includes custom handmade doors along with a billet aluminum firewall and motor plate. In this case a steel motor plate was used to support the front of the engine and a billet aluminum mid-plate is used to support the rear of the engine at the transmission position. (The motor plate is reminiscent of early V-8 Corvettes that were supported off the front of the block.) In the rear of the body you will see custom aluminum wheelwell panels, representing more MC craftsmanship. 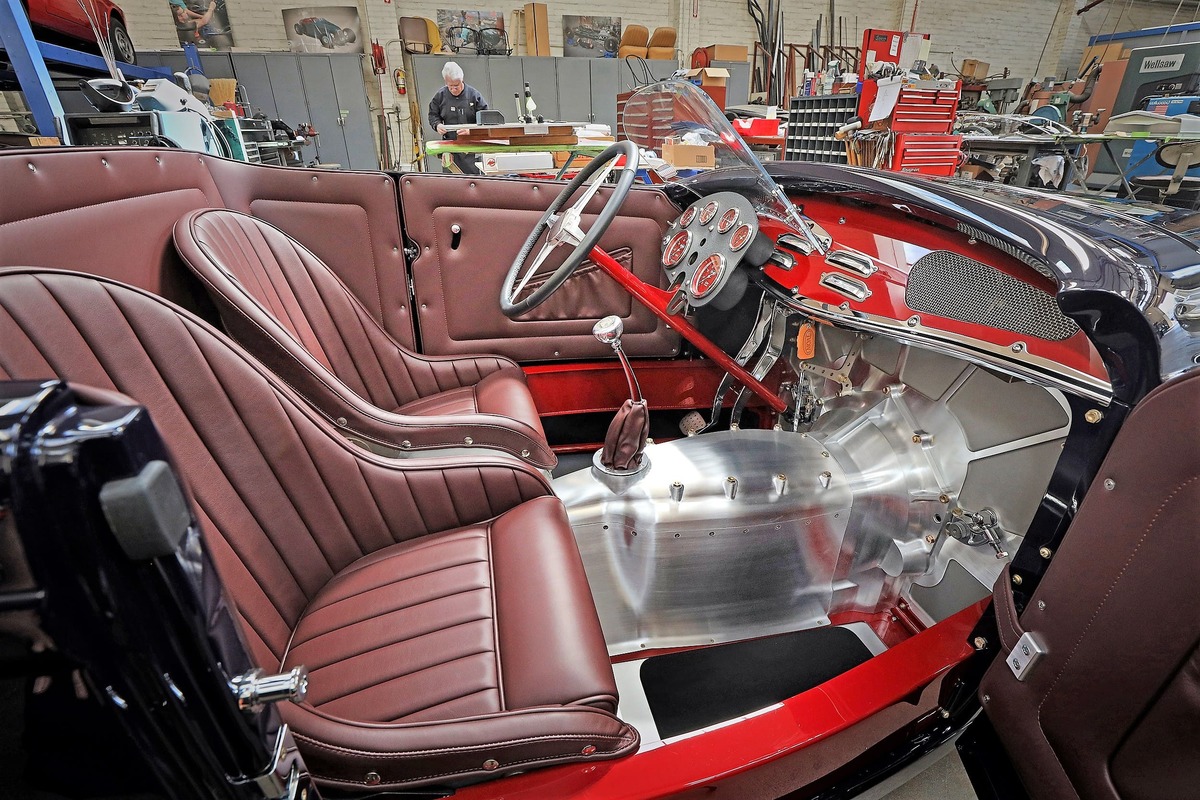 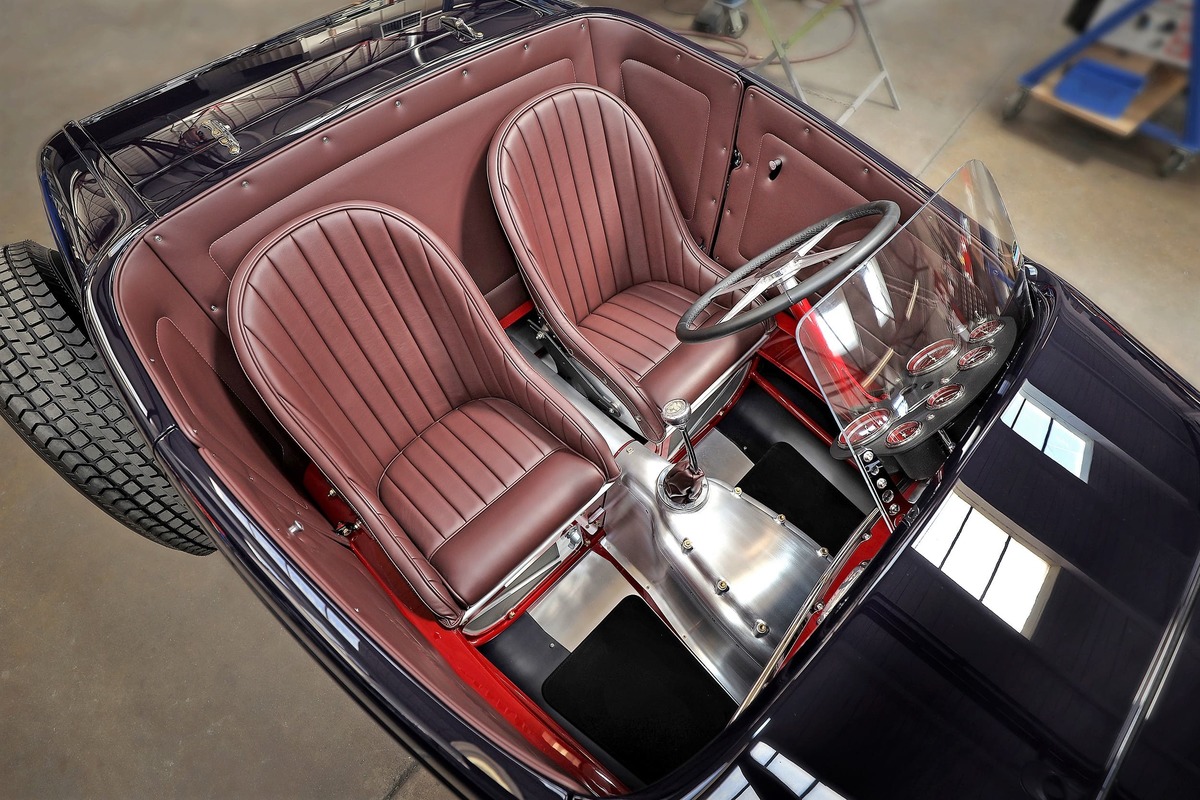 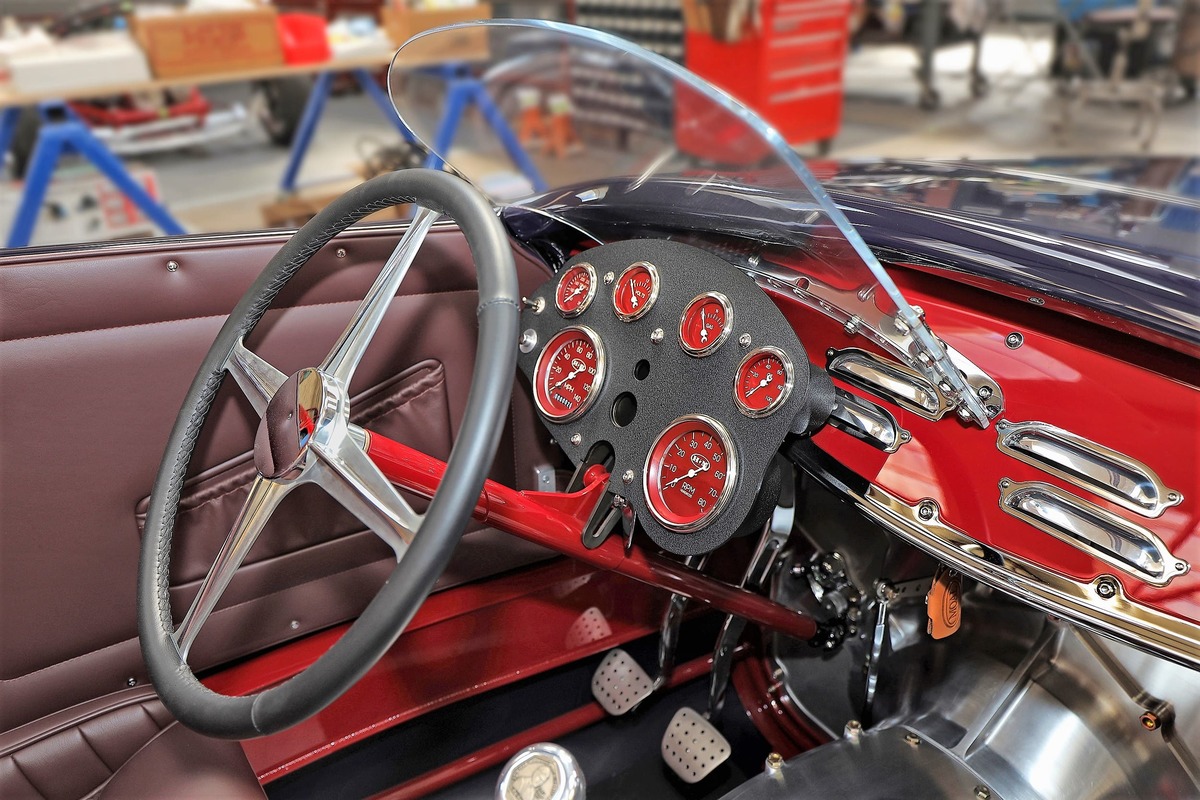 Inside there’s no mistaking the matching of the hot rod and the sports car influence. There are ample examples of Sid Shavers mastery at the sewing machine immediately visible in the door panels, inner body trim, all the while paying special attention to Shavers crisply stitched MC bucket seats. The MC aircraft-style buckets are covered in brown leather while rubber mats are used on the aluminum flooring. “Don’t need no stinkin’ carpeting in a hot rod.” Or something along those lines! The custom dashboard is another Howerton piece of mastery that houses race car–inspired gauges from the custom shop at Classic Instruments. The dash also serves as the mounting point for the single Plexiglas driver side windscreen and above the gauges, much like a Sprint Car. In fact, the instrument panel is very reminiscent of a Sprint Car or other form of dirt track racer. The gauge wiring and all other wiring was aptly handled by MC. The longer you stare at this interior the more you will see and marvel at the form following function. No wasted effort here. 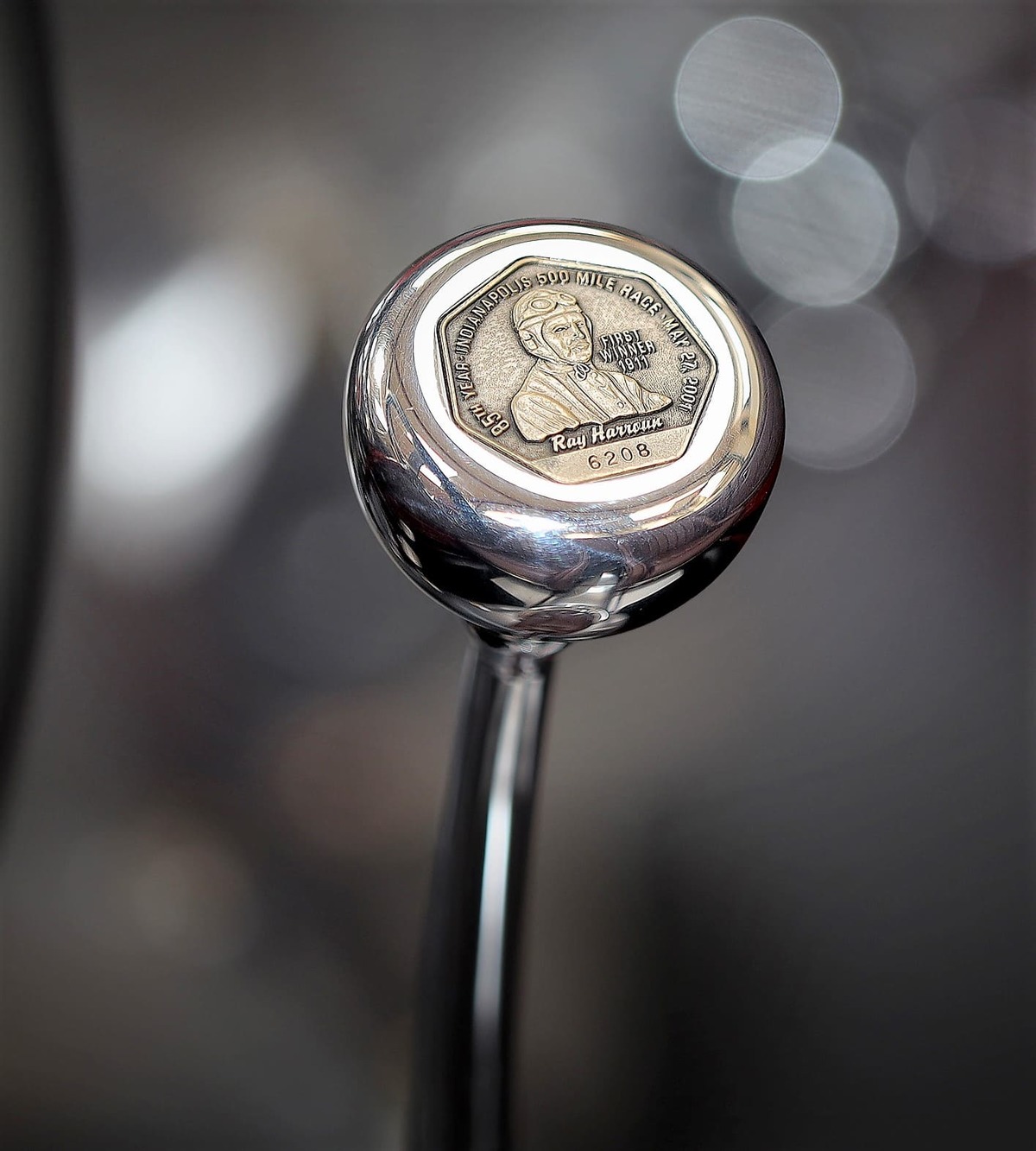 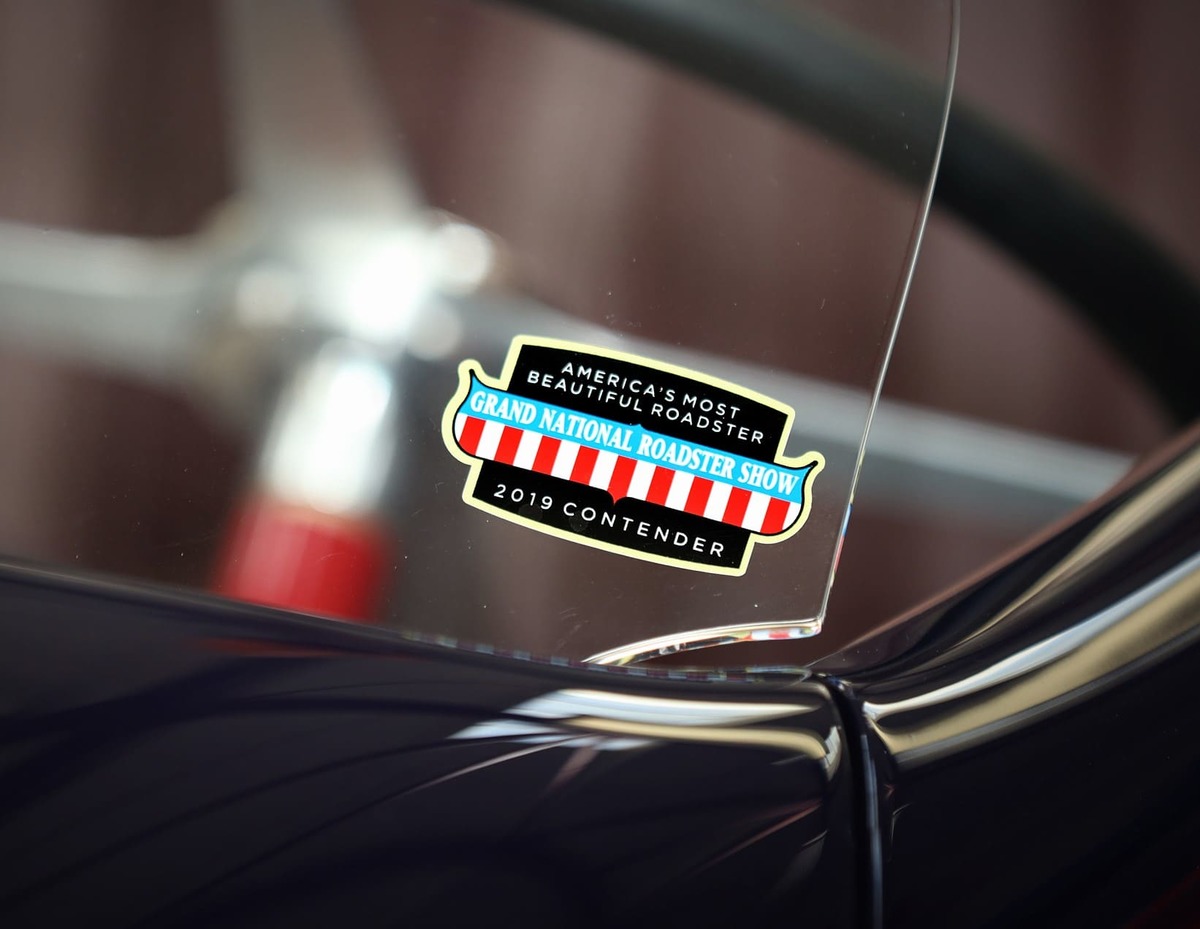 For those who are really inquisitive about the #42 visible on the lower cowl portion it’s the number that Howerton displayed back in his racing days. During the ’70s he won many races and was the Tulsa Speedway Champion, the Oklahoma Speedway Champion, Muskogee Nationals Champion, and Five State Champion during the 1970 season. He also won 60 feature events at both Tulsa and Oklahoma City racetracks and the 1974 Hoosier Hundred.

There’s one inescapable hot-rodding truth … stick around long enough and you will see it all. And just when you think you have seen it all, take another look because someone with creativity and craftsmanship will expose you to a fresh idea. MR