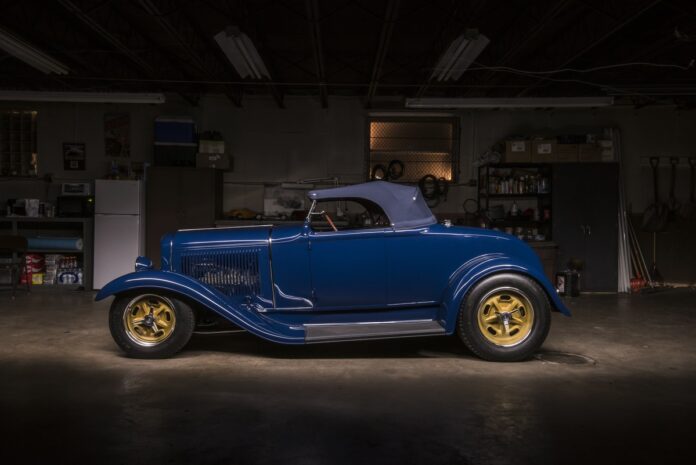 Let’s begin the journey of this amazingly well-done A/V-8 hot rod through its three owners: Jack Stirnemann, Don Albers (who Jack started the car for), and today’s owner Tom Markland. The A/V-8 hot rod is steeped in rodding lore with the likes of John Athan (longtime friend of Ed “Isky” Iskenderian) who is often credited with building what’s possibly the first A/V-8 hot rod (the combining of a Model A body with a 1932 Flathead V-8 or later and chassis). 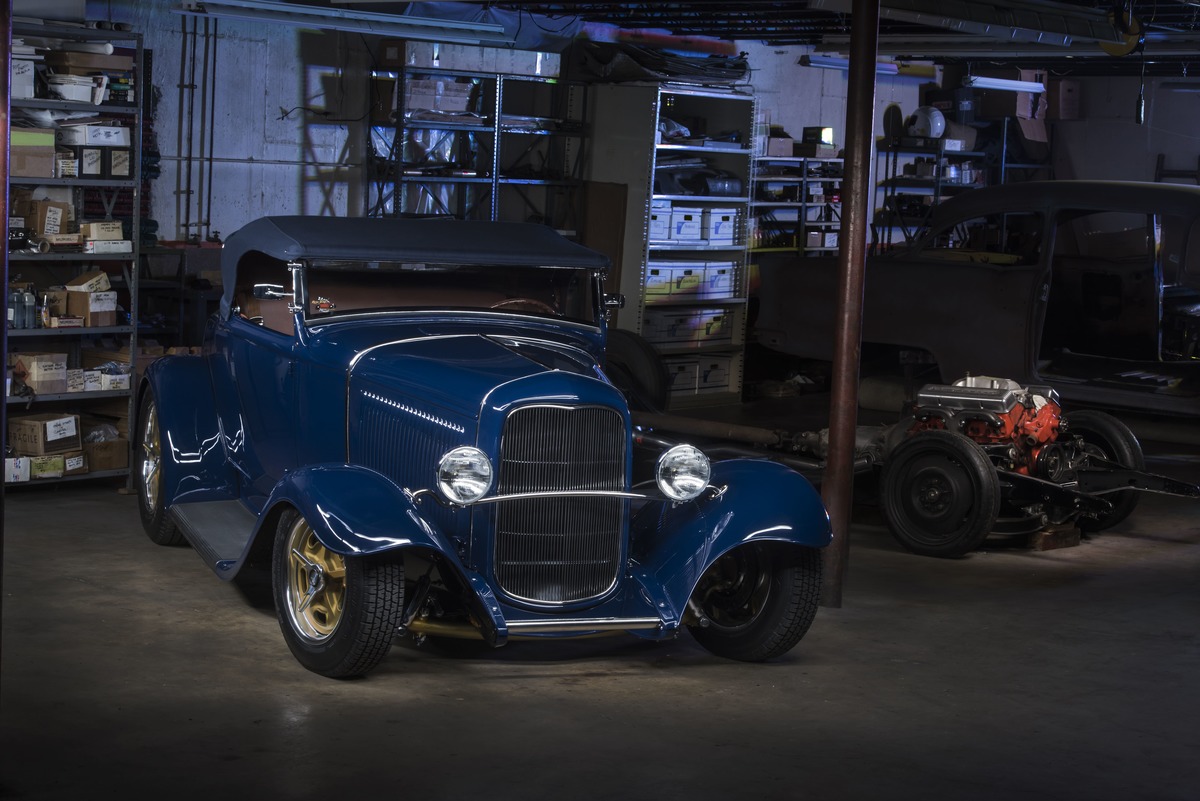 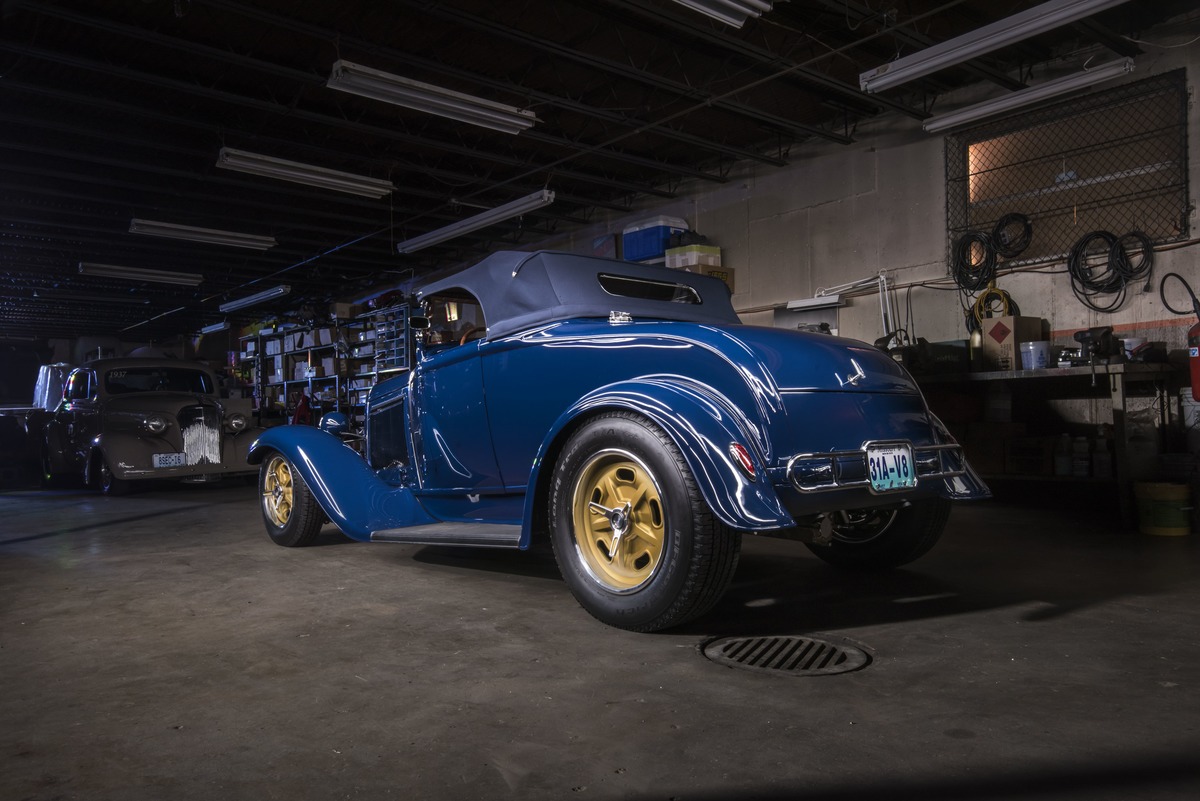 “Let’s Start at the Beginning” … As the Saying Goes

The late-Jack Stirnemann spent his 61-year building career fabricating all sorts of cars, from drag race to restorations, even 200-mph Bonneville racers (including record holders), but mostly hot rods as they were his true love. It was back in 2007 that Jack and his brother Harry began building this Model A roadster for upholsterer and friend Don Albers as fill-in work between other projects. 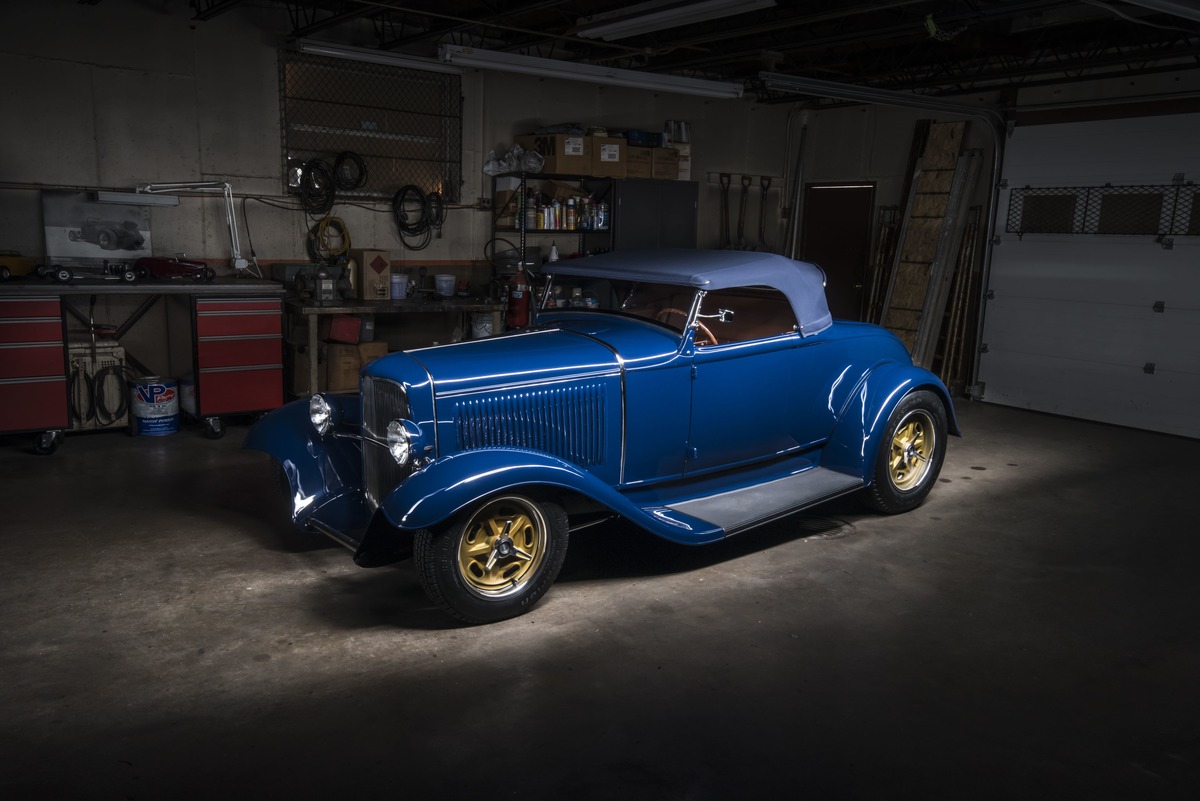 The basis of this A/V-8 was literally the “basis” with an original 1931 Model A roadster body, a pair of original 1932 framerails, a Flathead engine, C4 automatic, and a Halibrand V-8 quick-change rearend. From this point it was find, fabricate, and finish. Over the course of a decade the A/V-8 began to unite, albeit slowly. Initially the original 1931 Model A roadster body and Deuce frame were fit to one another. This was and is no “plug-and-play” effort as any hot rodder with a Model A on a Deuce frame will attest.

During the build the body was channeled 2 inches at the front of the cowl to provide the eye-appealing downward slope that runs from the cowl, over the hood, and onto the sectioned Deuce grille shell. At this time Rootlieb received the thumbs up to build the custom four-piece hood that would open and close much like a 1932 hood. Nearing the end of the “fill-in work time” the Model A body, doors, and reworked 1932 Ford frame, fenders and running boards, and grille were fitted. 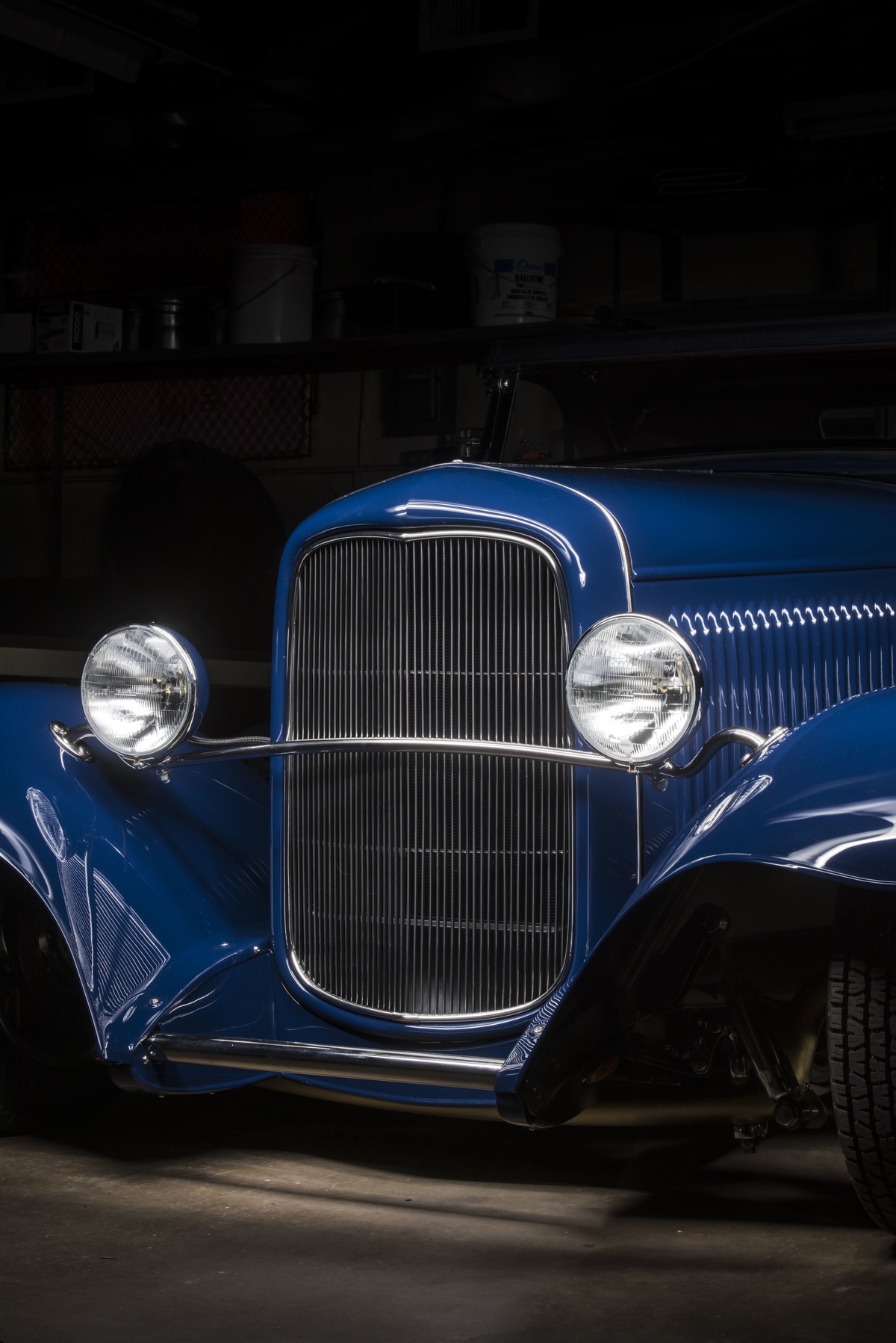 So, what does it take to seamlessly fit a 1931 Ford roadster body to 1932 Ford roadster framerails? Jack started in the rear of the body and cut out the fenderwells and grafted on a pair of Brookville Roadster Deuce rear fenderwells (and later bobbed fenders), enabling them to fit the radius of the Model A rear quarters. At this point both Jack and Harry placed the body onto the ’rails with the rear body rockers angled to fit the cowl width, which made them almost touch in the front. At the front of the cowl the brothers made a pie cut so the front of the frame will fit the Deuce grille shell width. The running boards fit the frame and rear fenders as they would in a stock application. The front fenders were then modified, as was the front splash pan. What the Stirnemann brothers ended up with was a Deuce-appearing roadster with an unmistakable 1931 Model A cowl and body. 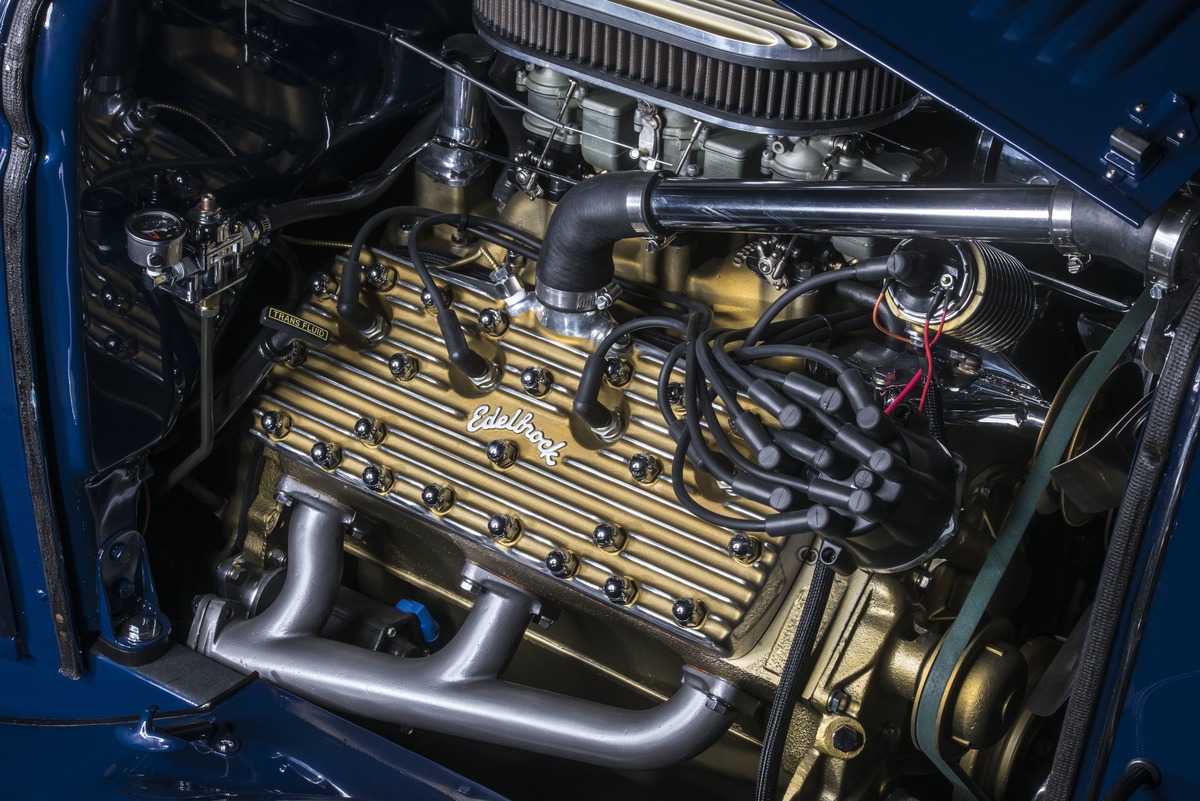 With less than five months until the Grand National Roadster Show and a chance to compete for the America’s Most Beautiful Roadster (AMBR) trophy (the tall one!) when Jack uttered the words “Let’s just do it.” Using an artist concept drawing from Eric Brockmeyer, the roadster was accepted by Rod Shows as a competitor for the AMBR competition. And it was “full build speed ahead.” 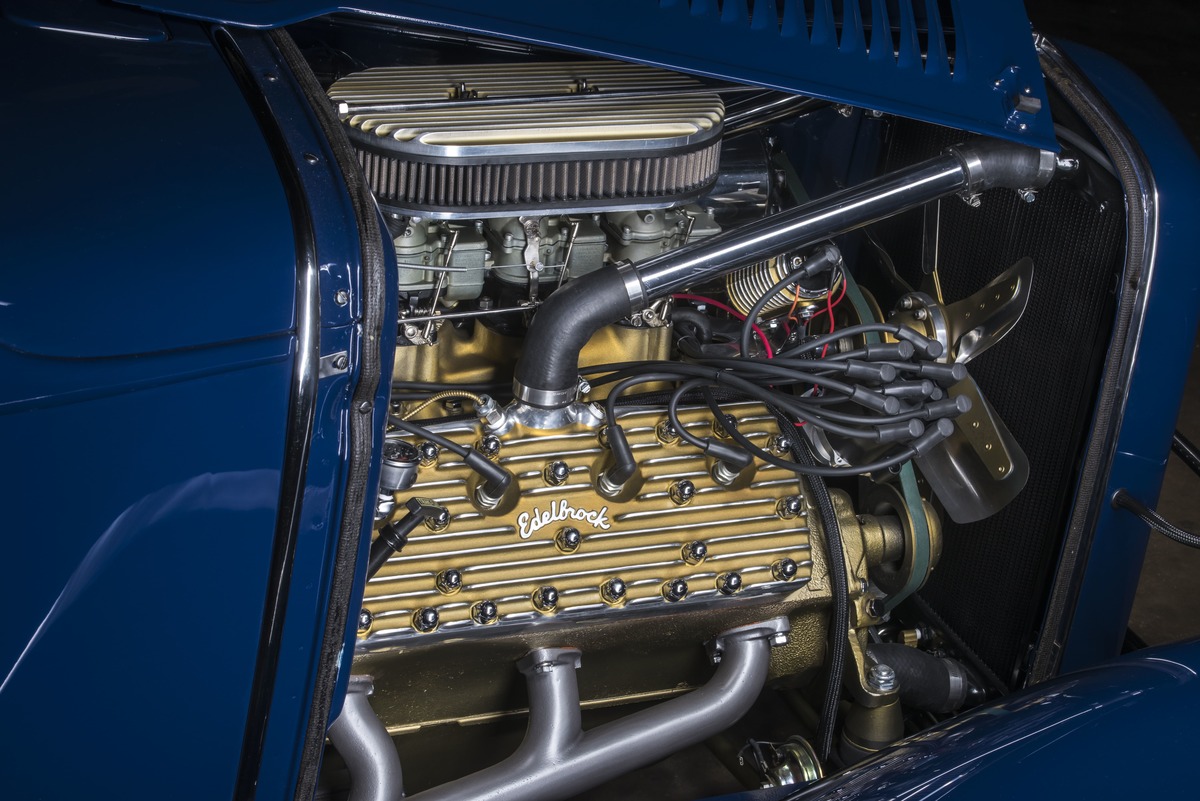 At this time frame the stock bumpers were discarded, going without in front and a fabricated custom rear nerf bar that surrounds the license plate in back. While looking at the rear bumper make sure not to miss the 1939 Ford “teardrop” taillights positioned on the modified Brookville Roadster Deuce fenders. At this time the brothers were working at splitting and flipping a pair of 1946 Ford wishbones that would be used as part of the front suspension. Ernie Vishion would be “leaned on” throughout the process for his machining skills, which are extensive, as he’s been referred to as the “Lil’ John of the Midwest.” 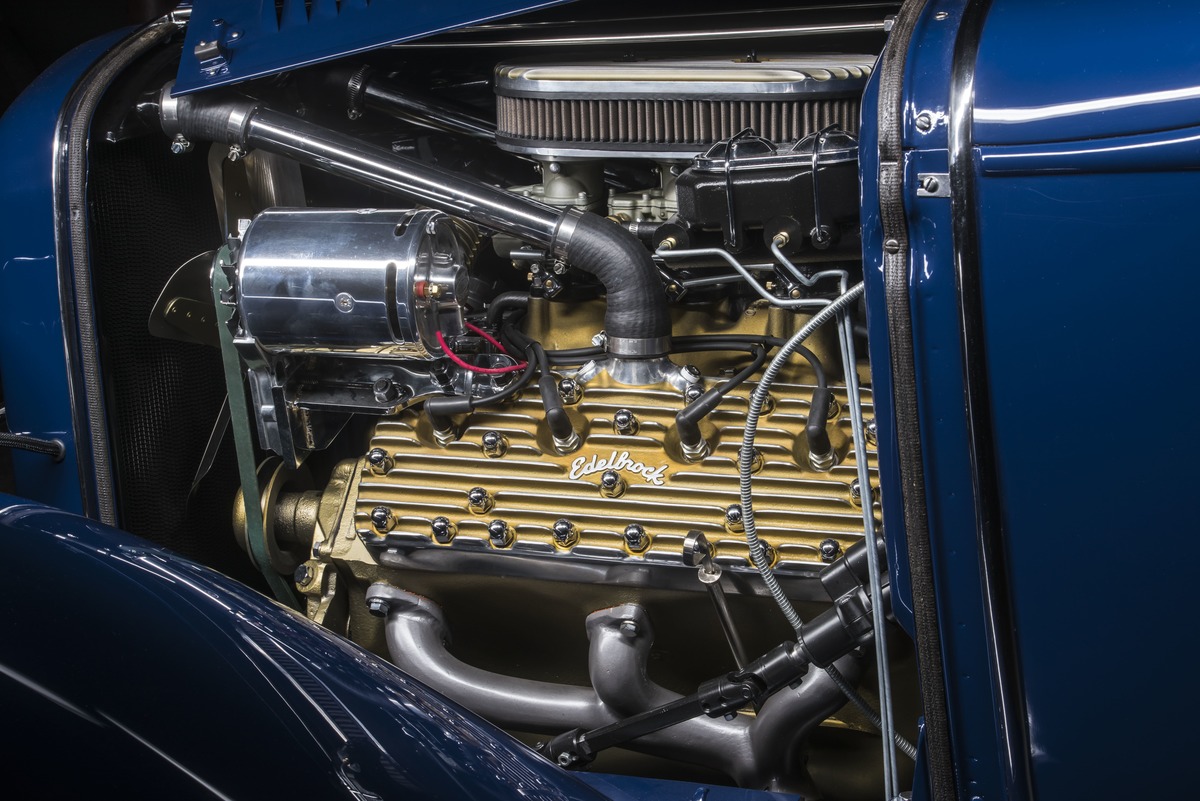 It was now that the Deuce chassis was fitted with a Model A rear crossmember, a 1946 Ford X-member, and a Deuce front crossmember all used to tie together the 1932 Ford framerails. Upon further examination one could see that the chassis has its motor mounts and all of the prerequisite front and rear suspension location points in position to accept the Halibrand quick-change and the original I-beam front axle. During this time the modified fenders, grille shell, hood, and other body pieces were primered and readied for paint. Jimmy Hervatin handled the meticulous metalwork while the Stirnemann brothers put in the countless hours of sanding and body prep. With less than 50 days remaining, Harry applied the two-tone colors, black and Warwick Blue (Aston Martin), over the frame. 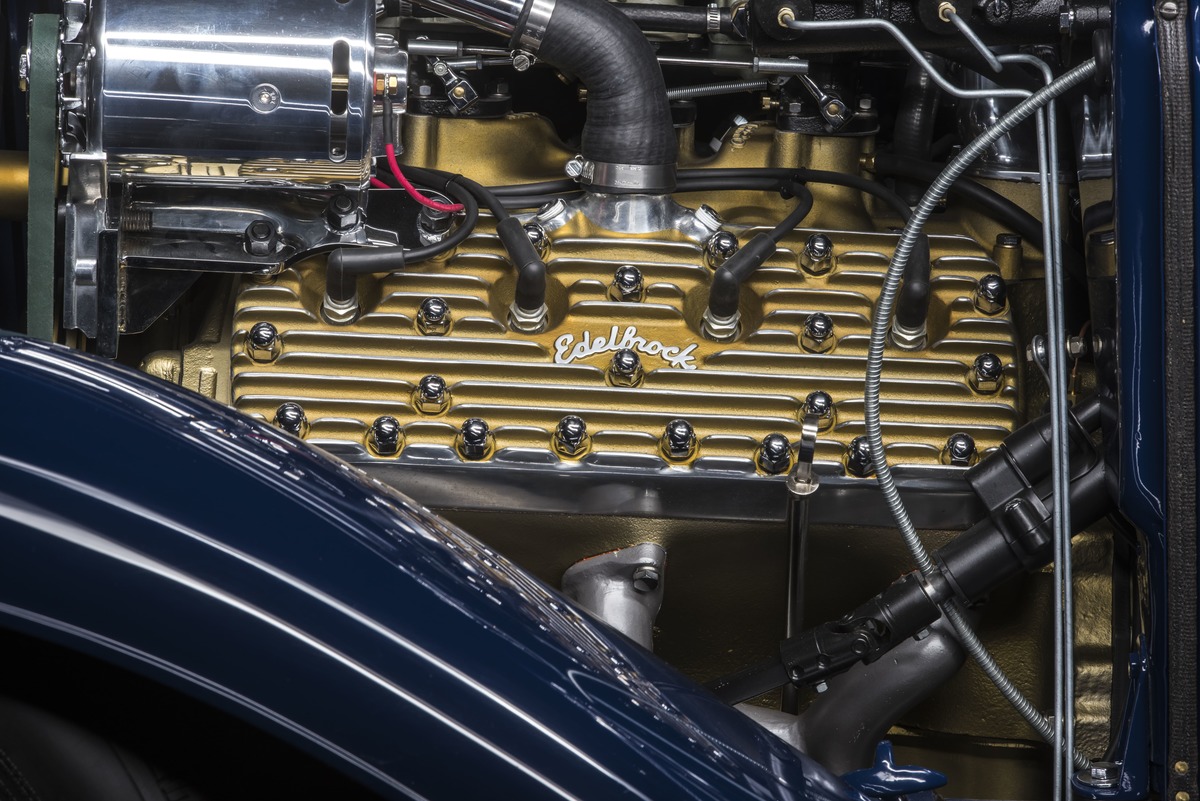 The Halibrand quick-change rearend (3.78 gears) is equipped with Ford 9-inch drum brakes and located with a triangulated four-link, Pete and Jakes chrome monotube rear shocks, a Model A spring, and the Stirnemanns fabricated the rear sway and Panhard bars. Up front a 1932 Ford 4-1/2-inch dropped I-beam is held in place by a pair of chrome Pete and Jakes shocks and Model A leaf spring. Steering chores fell to a 1932 Ford box, early Ford spindles, and braking by way of Wilwood disc brakes. 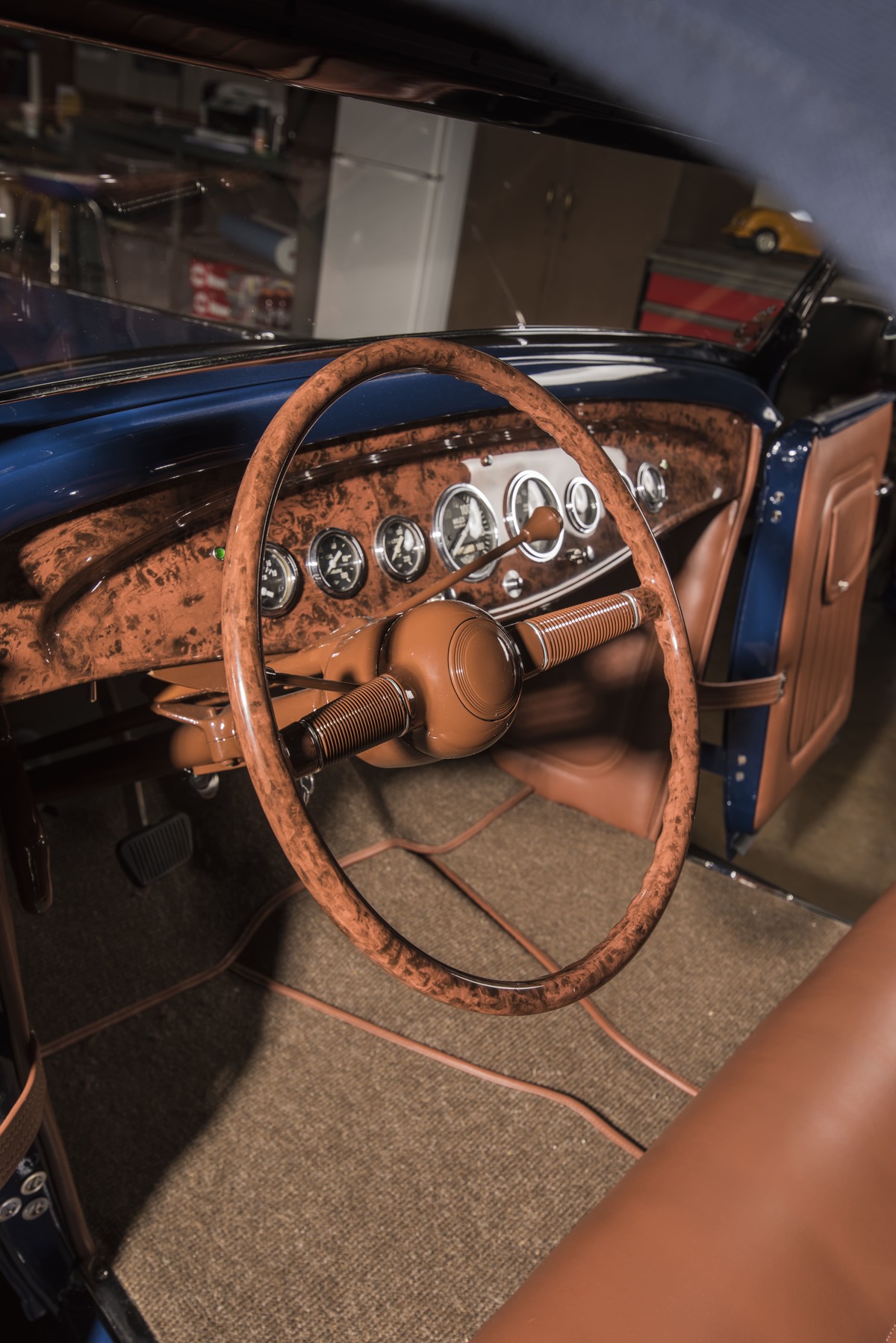 The Flathead is now dropped into position along with the mounting of the 3-inch chopped cloth top. The 239-inch Flathead is the 59A (1946-1948, 24-stud configuration) that uses JE pistons, an early Merc crank, with the necessary machine work by Baxter Ford Parts. To this an Isky 400 Jr. cam was used along with aluminum Edelbrock heads, all held together through the liberal use of ARP hardware. The block and heads are crowned with a Navarro intake and three Stormberg 97s with custom air cleaners. The electrics begin with the trunk-mounted Odyssey battery that’s maintained by a Powermaster PowerGEN alternator. From here an electric fuel pump is used to feed the Stromberg carbs while an MSD distributor and coil provide the spark. Making sure the fired gases exit is a set of Red’s Headers with 1-1/2-inch tubes that connect to 2-inch pipes that eventually lead back to a pair of glasspack mufflers. The Flathead is backed up to a Ford C4 with a 2,000-rpm stall converter. 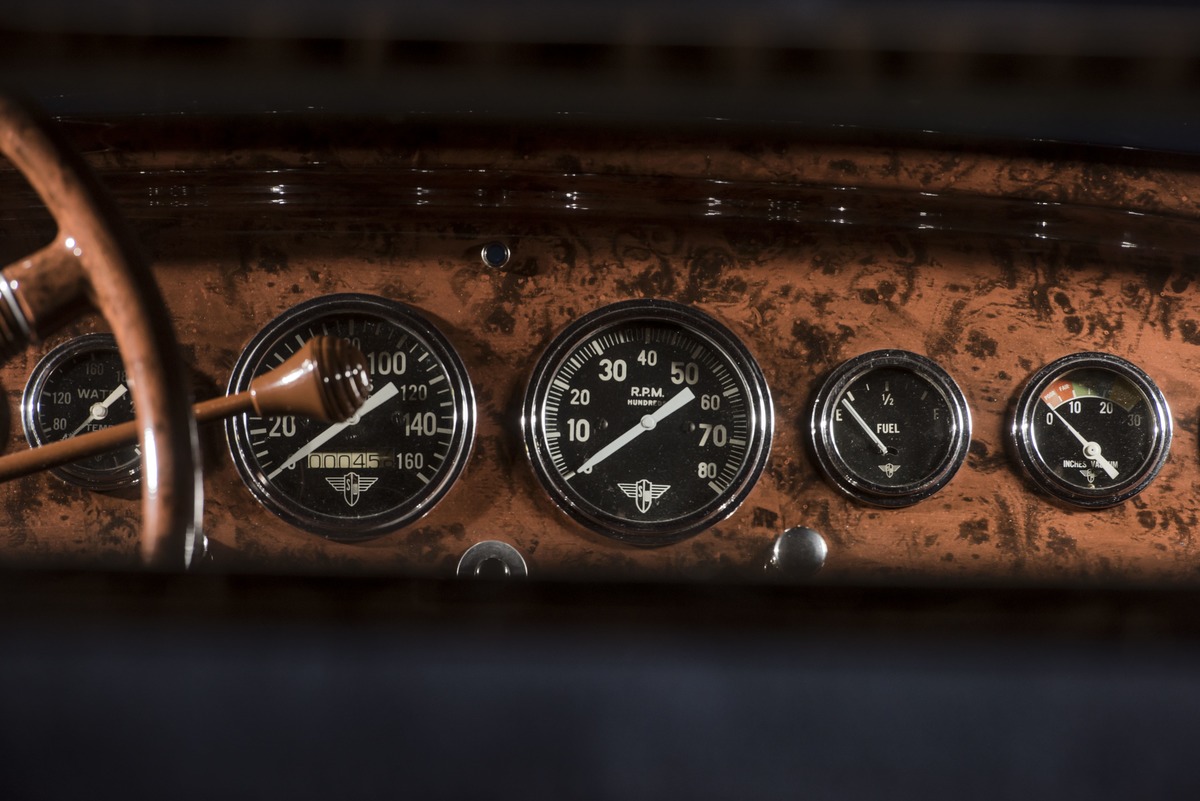 It’s getting down to crunch time, which involves finishing up details like mounting the true knockoff Sebring model E-T Wheels wrapped with the BFGoodrich/Coker 155/80R15 rubber in front and 235/65R17 rubber in back. 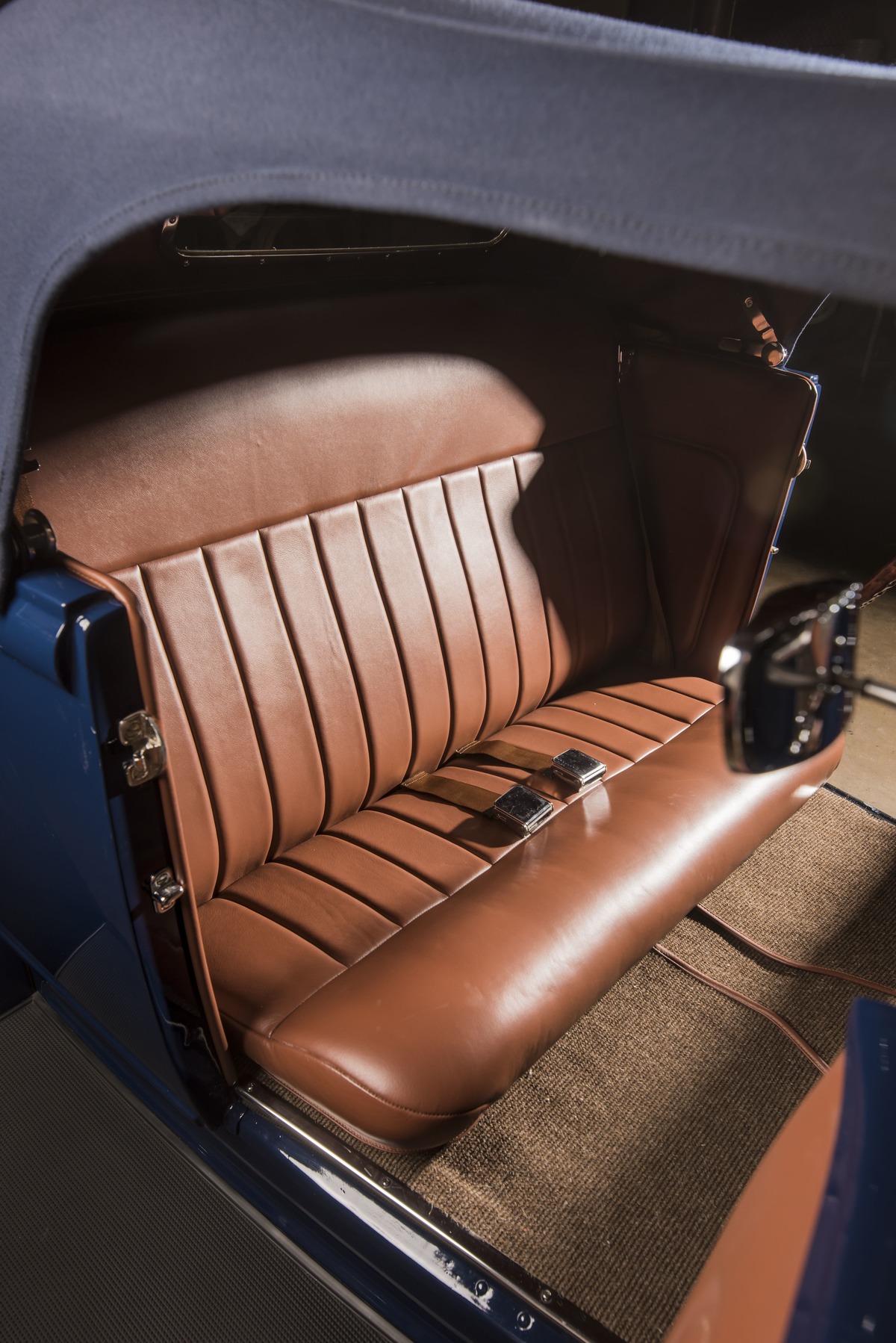 It’s time and the metalwork is complete thanks to Hervatin. Look closely and you will see additional fabrication and metalwork in the form of a rear roll pan, the rear nerf bar, rear fenders that are bobbed 6 inches, a 2-inch channeled cowl, 3-inch chopped Deuce windshield, and the top resting on chopped Model A lower stanchions, the grille shell and insert sectioned 2-1/2 inches, and a 1932 fresh air vent was added to the Model A cowl. Resting in front of the Deuce grille is a dropped headlight bar with King Bee headlights. Once Hervatin completed his tasks it was Harry and Jimmy Marshall who finished the bodywork chores and then back to Harry who applied the Warwick Blue color. Next up was bringing the paint to life through the expertly operated buffer of Gerry Krizek. Throughout the assembly process it was Joey Hamm and Harry’s son Mark who put in the hours and patience to make it all come together oh-so beautifully. At this point it was also time to assemble the 1940 Ford locking steering column with self-canceling directional wick, topped with an original 1940 Ford 15-inch wheel. Next up the woodgrained 1932 Ford dashboard with original curved glass Stewart-Warner instruments are fitted to the Model A cowl. At this point Jack was on top of the wiring using cloth-covered wires to maintain the traditional appearance. 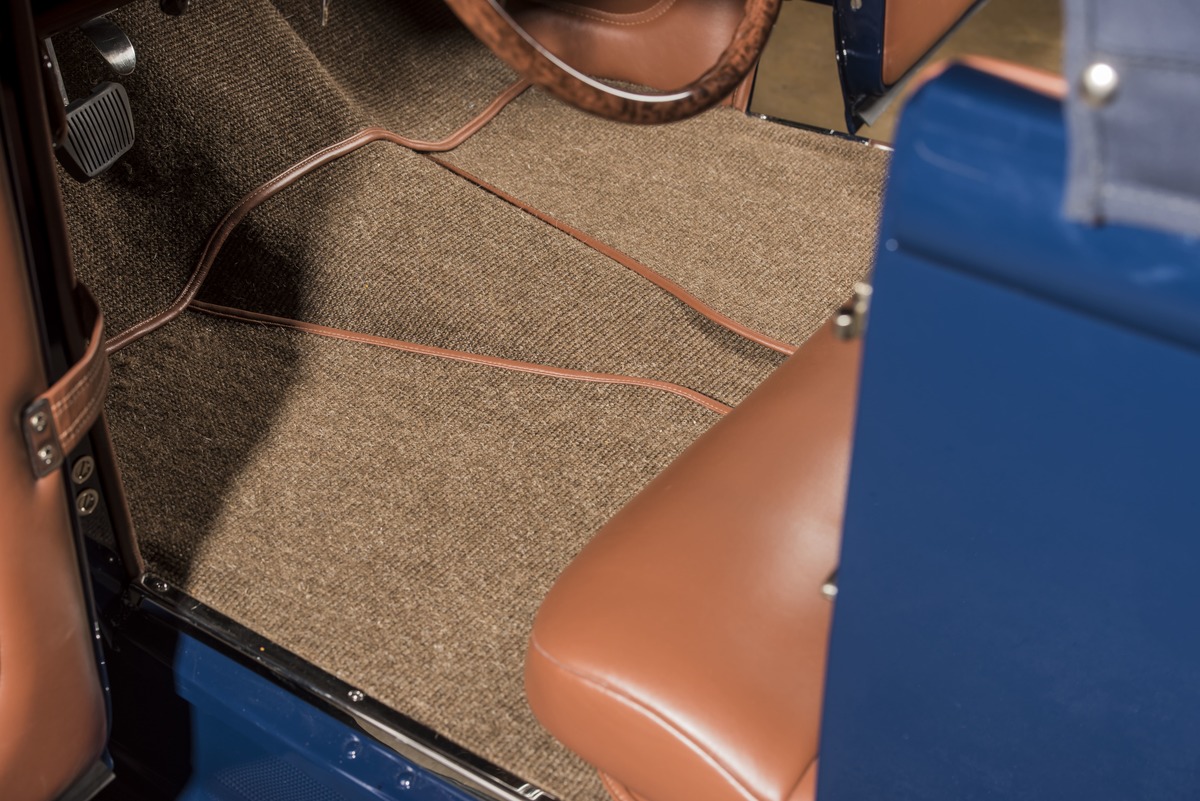 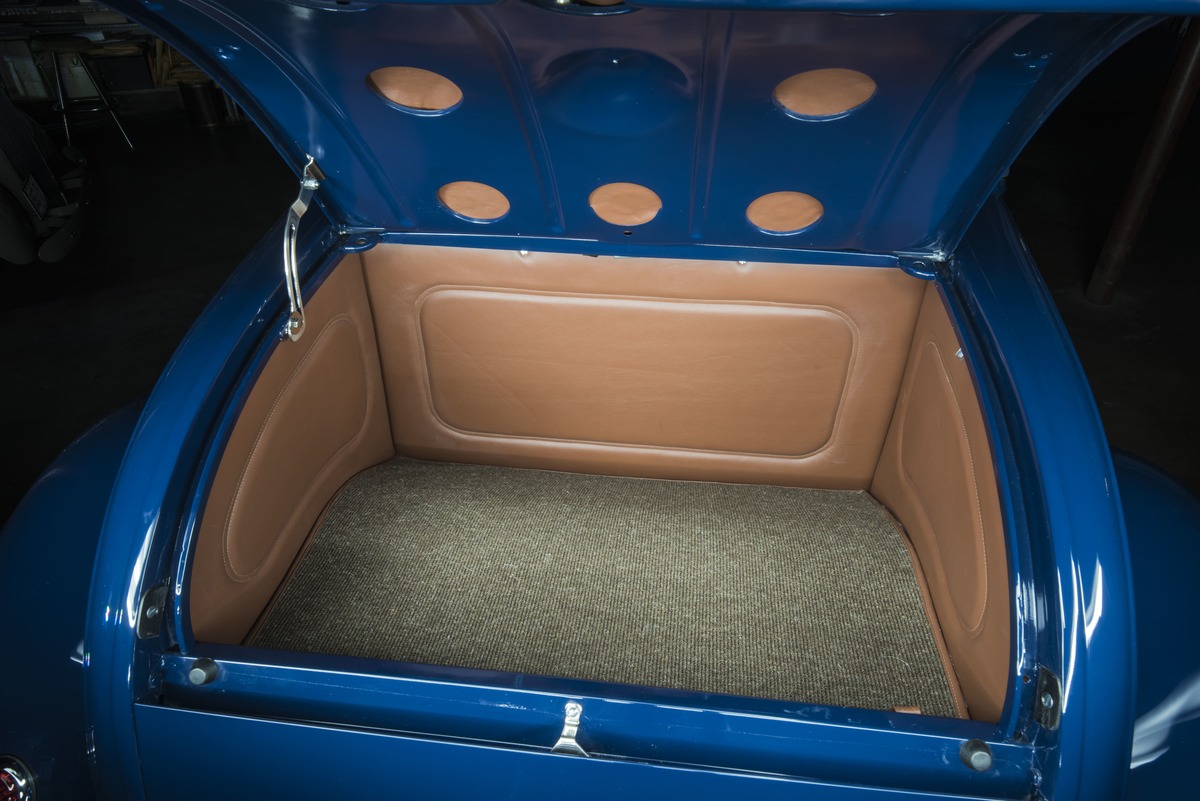 We now see the top positioned and the decklid is fitted. Inside the trunk is a Tanks Inc. custom-made tank while access is gained through an externally mounted Alan Johnson race car–influenced flip-top gas cap. Don Albers stitched the Carmel leather over the custom bench seat then accessorized with Juliano’s seatbelts while accompanying is the tan square-weave carpeting.

Lastly, there was the drive to SoCal to compete in the 2016 Grand National Roadster Show. There’s no denying that this A/V-8 represented itself and all roadsters, fendered or not, at the show in first class fashion. Without question this A/V-8 was Jack’s finest monument and we know there is no doubt in Tom’s eyes that he has a hot rod for the ages. MR