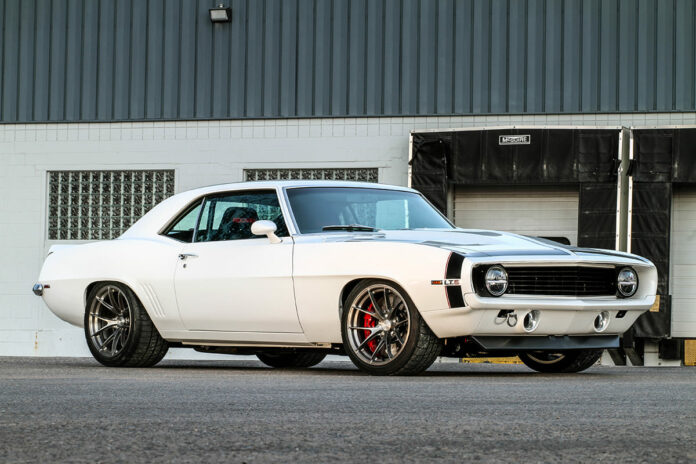 In the world of classic muscle cars there is a solid variety to choose from should you want to start a fresh build or buy one already completed. The decision on which car to build or buy, whether it be a Chevelle, Nova, Tri-Five, Camaro, or a late-’50s or ’60s fullsize car, such as a Chevy Bel Air, Impala, or Biscayne, are only limited by your personal taste, imagination, and fatness of your wallet.

So, when it comes to which vintage muscle car is most popular these days, the first-generation Camaro appears to be the number one choice. More specifically, it’s the ’69 that gets most of the attention.

First of all, the car’s unique, one-year-only body lines, makes it stand out from the first two years of the Camaro (1967 and 1968). The molded body streak swoops from the front fender just above the wheel opening and works its way into the door, gradually fading before becoming pronounced once again on the quarter-panel. That element gives the car the illusion it’s moving while sitting still. And the Camaro’s “gills” just in front of the rear tires give it even more sporty vibe. It’s the opinion of many that the GM designers pretty much got everything right when they drew this car up.

Another selling point to the car’s popularity is how good it looks in any build situation. Whether the car is built as a drag car, Pro Street, Pro Touring, or as a day-two restomod, it responds well to just about any change in personality. To me, it even holds its own in totally stock form.

Although the ’69 Camaro has a relatively large production number of 243,085, and with the aftermarket also offering complete bodies ready to build to your desired specs there’s no shortage of the car, even that hasn’t deterred a real-deal ’69 Camaro fetching good money in just about any condition.

Another factor to consider as to why it’s so popular is that the car was highly influential years after it hit the showroom floors. There were plenty of impressionable teenagers who fell in love with the car even after it aged a few years and became an attractive used-car buy. But for most young drivers, the car was still out of their price range. Today, those teens are now at the point in their lives where they have enough disposable cash to afford the car that they wanted so badly during their high school years.

In the early ’80s a Camaro in decent shape would typically fetch somewhere in the neighborhood of $1,500-$2,000 depending on the model and engine combination. Those working a part-time, minimum-wage gig washing dishes at the Steer ’N Stein or attending the drive-thru window at Del Taco were rolling in about $3.35 per hour. Those wages made it difficult to take your girl out for dinner while at the same time trying to stash away enough coin for a used hot rod. And with gas prices at around a $1.60 per gallon, your bros still needed to dig in to the pockets of their OP shorts for some loose change if they wanted in on that weekend trip to the beach.

So, even if the ’69 Camaro isn’t your cup of W-30, it’s the top choice for a lot of muscle car fans. Just look around at any classic car show and you’ll notice there are more ’69 Camaros than any other car. You’ll find them sitting pretty with their hoods up and showing off that old-school small- or big-block or a modern LS or LT powerplant.