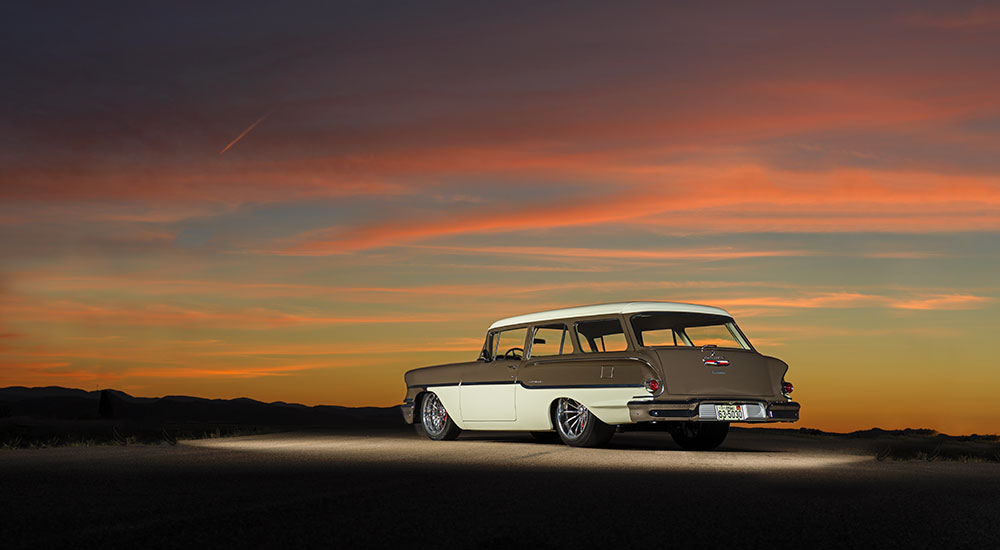 Hardly anything about 1958 was like any other year that preceded it, at least for Chevrolet’s passenger-car division. That year, the company changed just about everything about its cars, all the way down to what it called them. Let’s look at Derek and Eileen Eisenbeisz’s 1958 Chevy Yeoman 2 door station wagon and its transition into a top-of-the-line hot rod.

What happened to the Chevy station wagon is practically unspeakable, at least among contemporary wagonistas. After watching two-door wagon sales languish during the three years that preceded, Chevrolet all but killed the configuration for 1958. You could still get a Chevy Nomad that year, but it was just a trim package on a regular ol’ four-door station wagon. Chevrolet did build a two-door station wagon but banished it to the bottom rung and called it Yeoman, a historic title for family farmers. 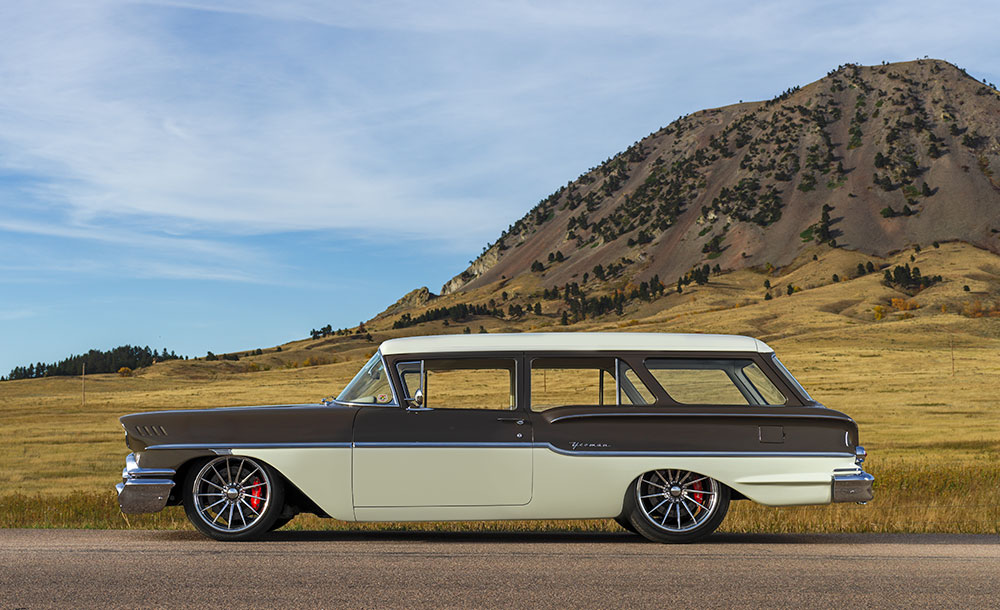 Sales that year justified Chevrolet’s decision: the Yeoman sold only 16,590 examples, making it the poorest-selling model in the division by a wide margin (1.3 percent as compared to 5 percent for the second-poorest seller, the convertible, which had a price premium to justify its existence). By contrast, Chevrolet sold almost 11 four-door station wagons for every two-door Yeoman. So, one could call the Yeoman a rare car. And this one is one of two that Derek and Eileen found.

Good friend Derry Jenson spotted the first one sitting in a pasture out in West River. “I had no idea what a Yeoman was until I saw that one,” Derek admits. “About that time wagons were coming on big, so we bought it.” 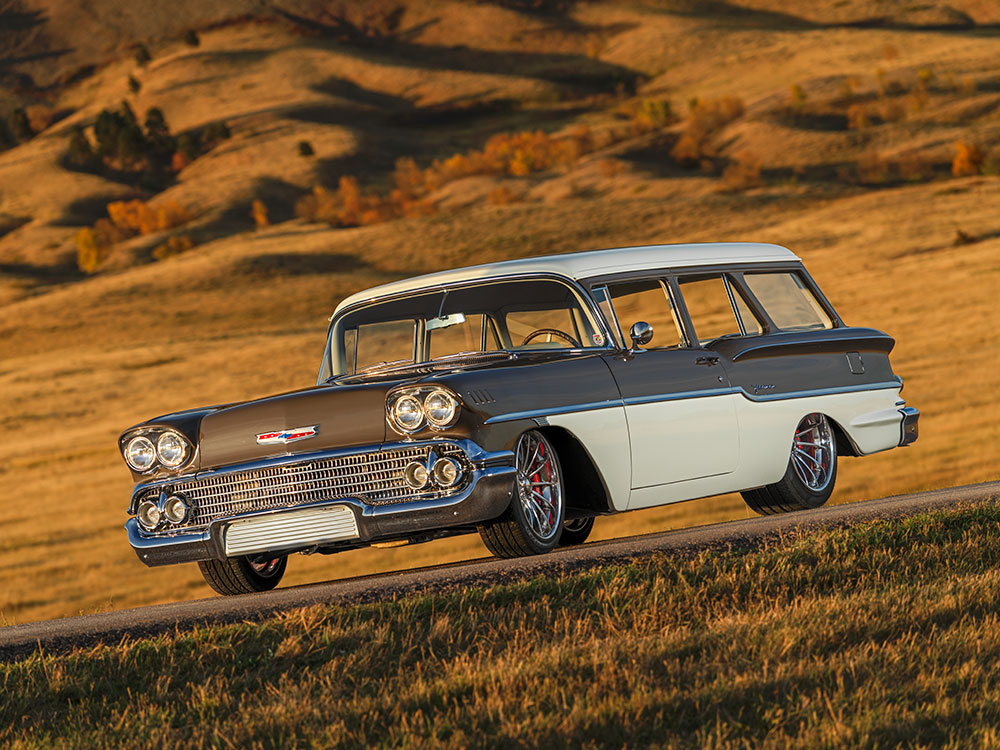 As they’d done with several other cars, they sent the field-find Yeoman to Paul Atkins Hot Rods and Interiors. But as the Atkins crew tore into the car, one thing became clear: Derek and Eileen would be money ahead to start with a nicer example. Despite the rarity, “This one just turned up,” Derek says.

By production numbers, all Yeomans are uncommon, but this one was downright rare. A super-low-mile California car that languished in storage for 40 years, it somehow ended up on Paul Atkins’ radar.

By this point, his crew had already mounted the field-find body to a Roadster Shop Ride Line chassis—no small task considering the differences between GM’s cruciform frame and the Roadster Shop‘s more conventional perimeter design. 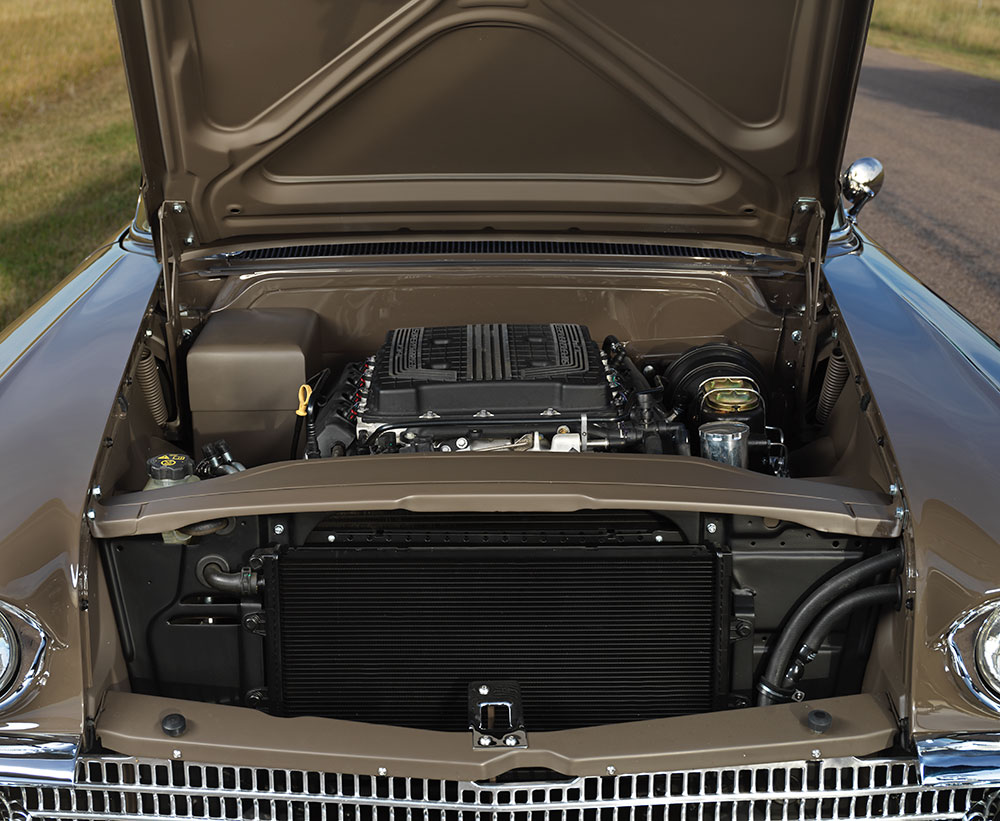 Like the cruciform frame that it replaces, the Ride Line chassis is a clean-sheet design based on a more conventional ladder-type frame, but with a substantial X-style crossmember. Rather than bend the rails from square tube, Roadster Shop fabricates the frame walls from 10-gauge sheet. Though more labor intensive, the method lets the shop exploit the unconventional floor shape with minimal intrusion. 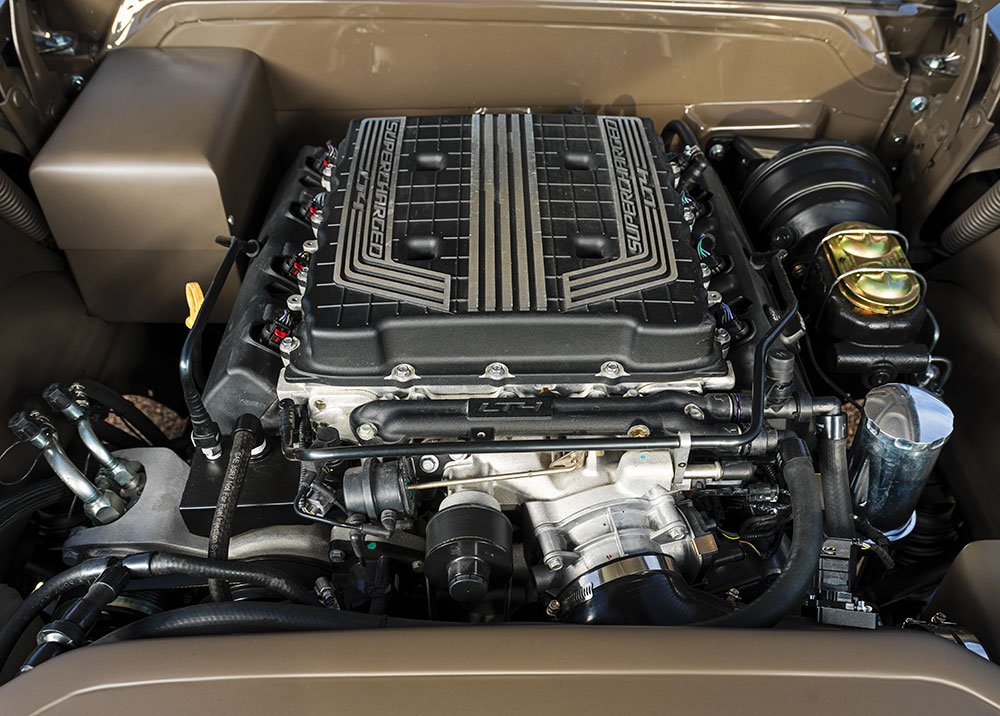 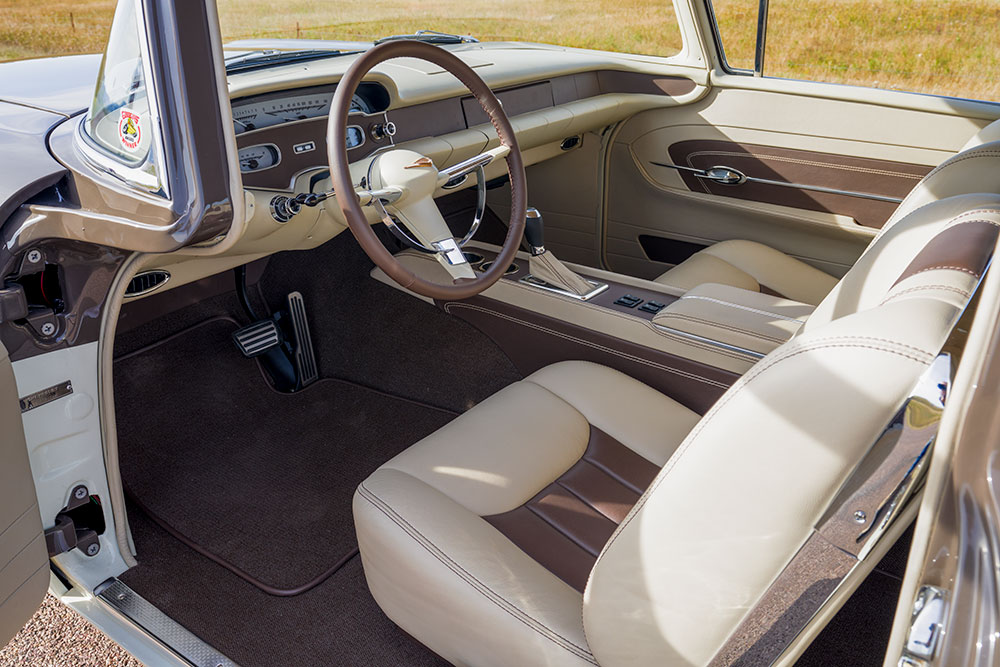 Derek and Eileen can justify the chassis with three characters: L, T, and 4. Designed for the C7 Corvette Z06, the supercharged 6.2L LT4 engine churns out a whopping 630 lb-ft of torque at a usable 3,600 rpm and 640 hp at 6,400, making it GM’s second-most powerful production engine … ever. Ten closely spaced gears in the 10L90 transmission that it feeds promise to keep the engine in its powerband.

Big power justifies big stoppers. Both ends use Wilwood brake kit including 14-inch drilled-and-slotted rotors with narrow six-piston Superlite calipers up front and four-piston calipers out back. Mike Curtis Wheels made the Riveter wheels. They measure 19×8 and 20×11 and wear 235/40ZR19 and 315/35ZR20 Pirelli P Zero tires. 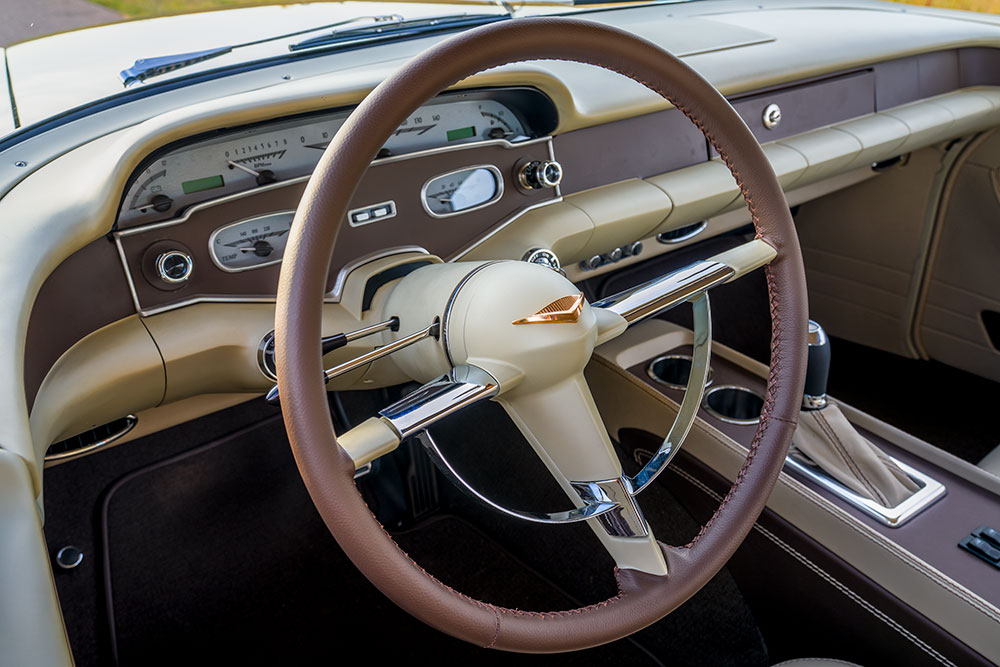 Appearance-wise, the body remains entirely stock. “We kept it that way because we wanted that Yeoman name,” Derek points out. First, it’s a name as rare as the model—Chevrolet used it for 1958 only. But more than that, it befits the owners of this one, Derek and Eileen, who just happen to be … farmers.

“Nobody knows anything about these cars—several people accused us of making a two-door out of a four-door station wagon. So, it’s cool enough in its own right.” Obviously, the sheetmetal underwent extensive surgery for panel fit and gapping, and the rear wells grew a few inches wider in anticipation of big rubber. But beyond that … stock. 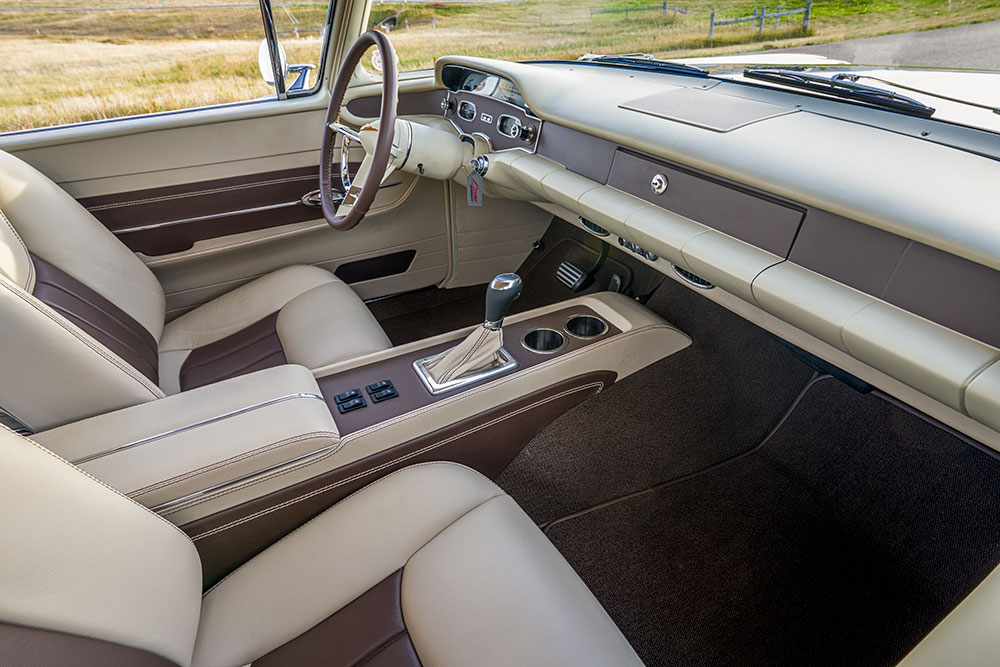 The color, of course, is anything but stock. “Derek fell in love with a similar color on a Corvette that was in [Atkins’] shop,” Eileen says, who refers to this combination as Milk Chocolate and Cream. “I originally wanted something blue, but I tell you what, I’ll never question [Atkins’] choice of color and materials again. It’s gorgeous!”

The interior began as a pair of 1964 Impala bucket seats and a narrowed rear bench that the Atkins team gutted and built up with foam. They clad the seats and trim panels in a combination of Sepia- and Khaki-colored Hampton leather, the floor in Douglass carpet, and the headliner in wool broadcloth. A downsized 1955 Chevy steering wheel mounts on an ididit steering column. The dash hosts a Dakota Digital VHX instrument cluster and a Vintage Air climate-control system. 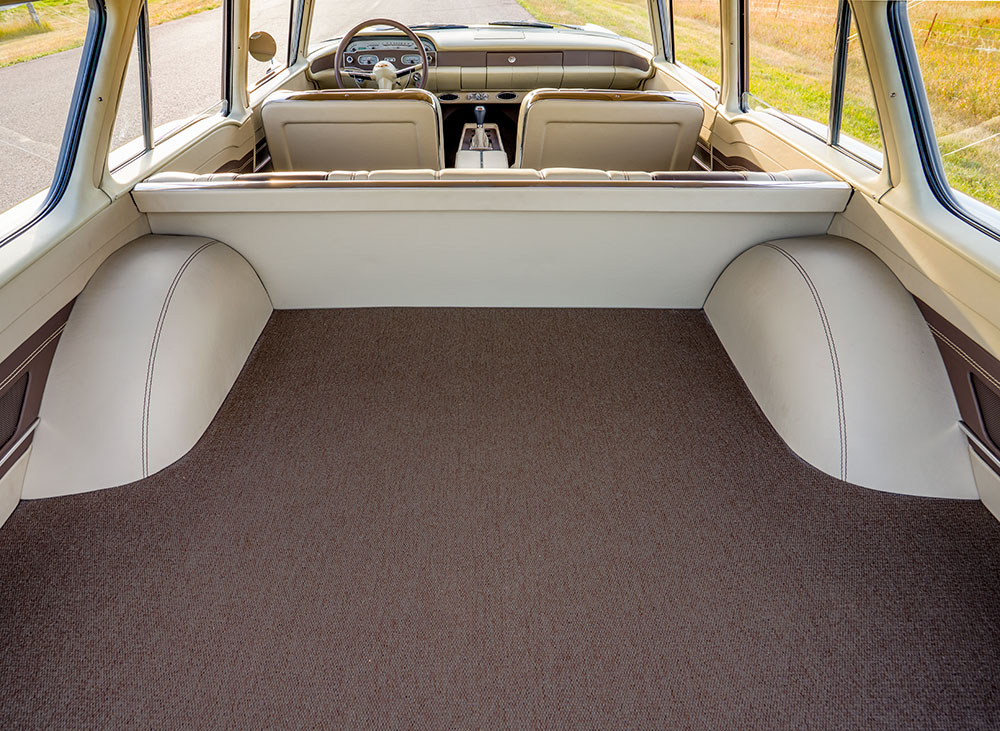 Nobody—least of which Chevrolet—could’ve anticipated what someone would do to the company’s least-popular utility vehicle. And probably not even Derek and Eileen could’ve anticipated just how popular their expression would turn out; in 2021, the car took a Top 10 Builder’s Choice at Goodguys’ BASF Nashville and won Best of Show, Committee Choice Car of the Year, and Best Interior at Kool Deadwood Nites in Deadwood, South Dakota. Earlier this year at the Counts Car Show in Rapid City, South Dakota, it won best interior, paint, Top 8 of the Big 4—basically everything except Best Ford, “which is kind of tough to do with a Chevrolet!” Eileen jokes. It took Top 10 and Sweepstakes at the Toppers Car Show in West Fargo, North Dakota. 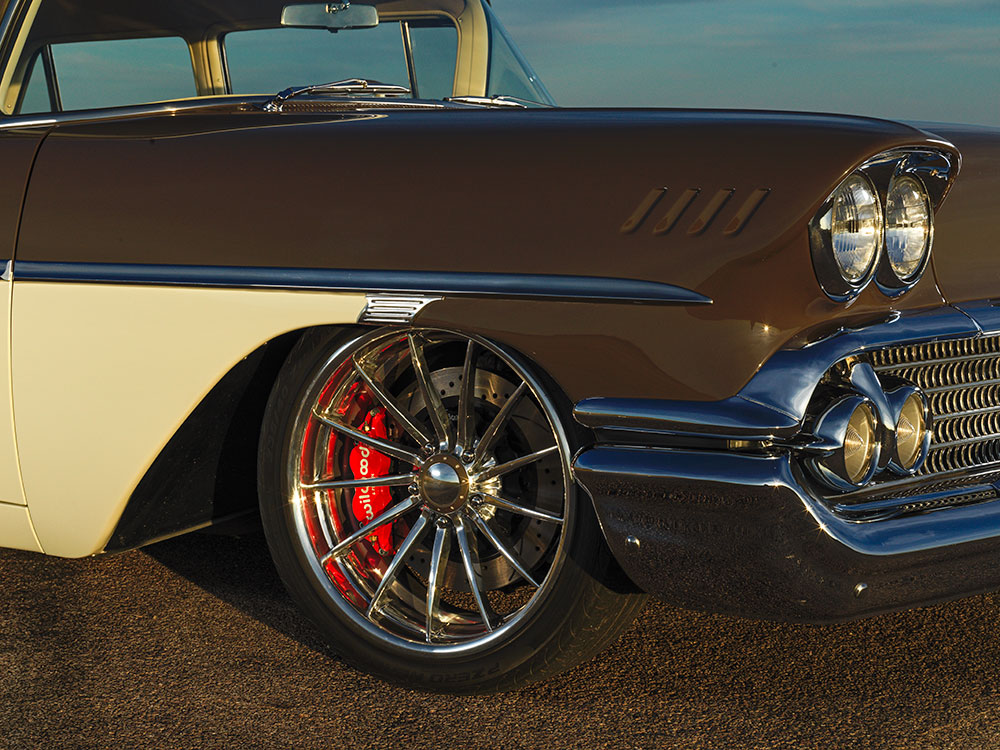 You might say that Derek and Eileen didn’t even anticipate just how nice their Yeoman would turn out. “I thought it would be a great ride for the grandkids—we could throw ’em in the back seat and take ’em places,” she says. “But it turned out pretty nice, so we might have to wait for a little of that newness to wear off before we go piling into it.” MR