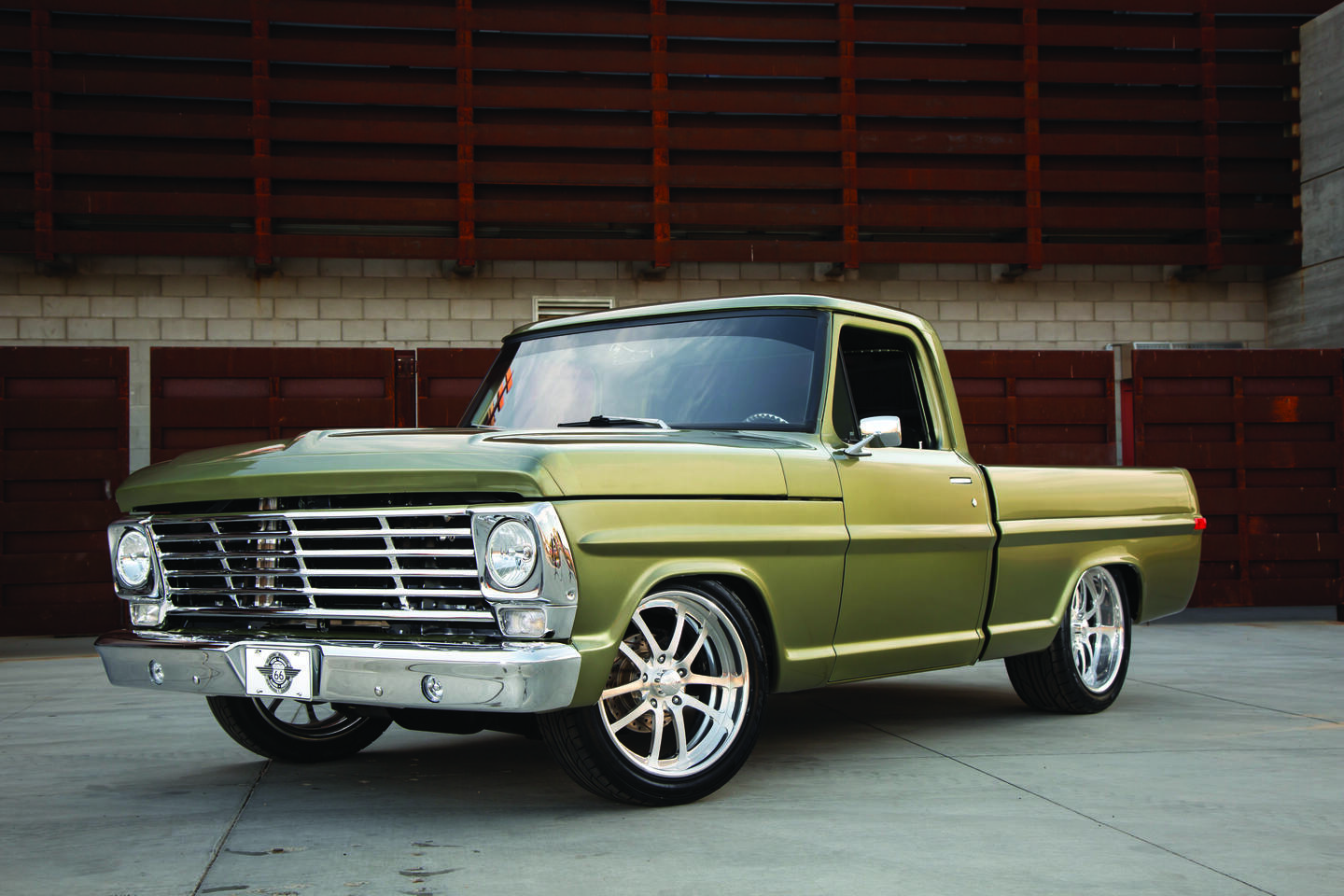 By Fuelish Media   –   Photography by The Author

Though we all like to think we drum to our own beat, we normally do things based on family tradition. Growing up around certain lifestyles definitely has its influences on our lives. It’s funny that sometimes we try to break away but, in the end, we gravitate back to what we know. It gives us a sense of comfort to know that our parents would approve of our accomplishments. 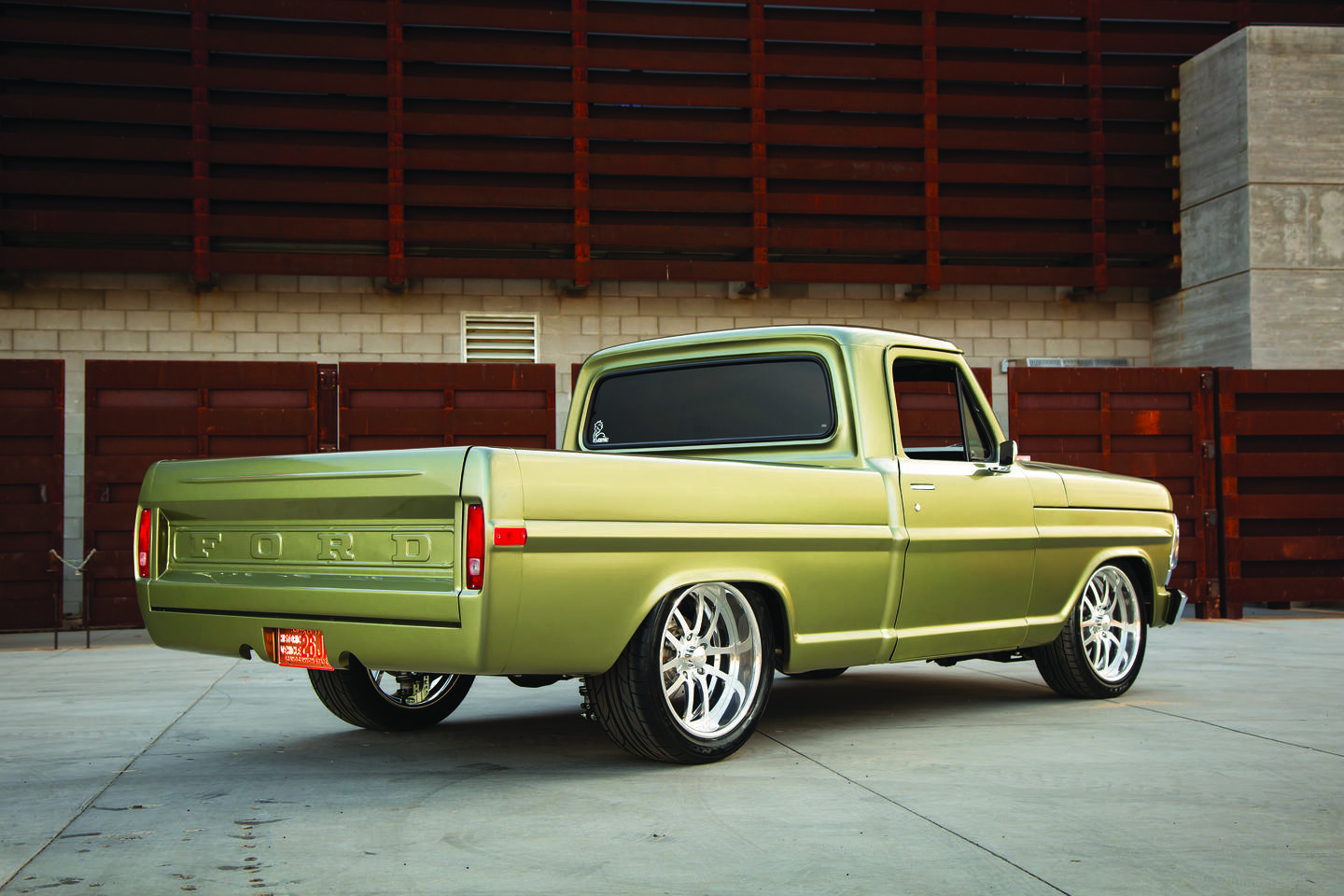 One of the biggest influences that shapes the way we do things is what our parents drove. For many of us, we grew up around family members who had grease under their fingernails and gasoline in their veins. Car culture is more than just the physical vehicles and the thousands of parts that they are made of. This movement is backed by individuals who have a passion for sharing automotive knowledge and experiences together. 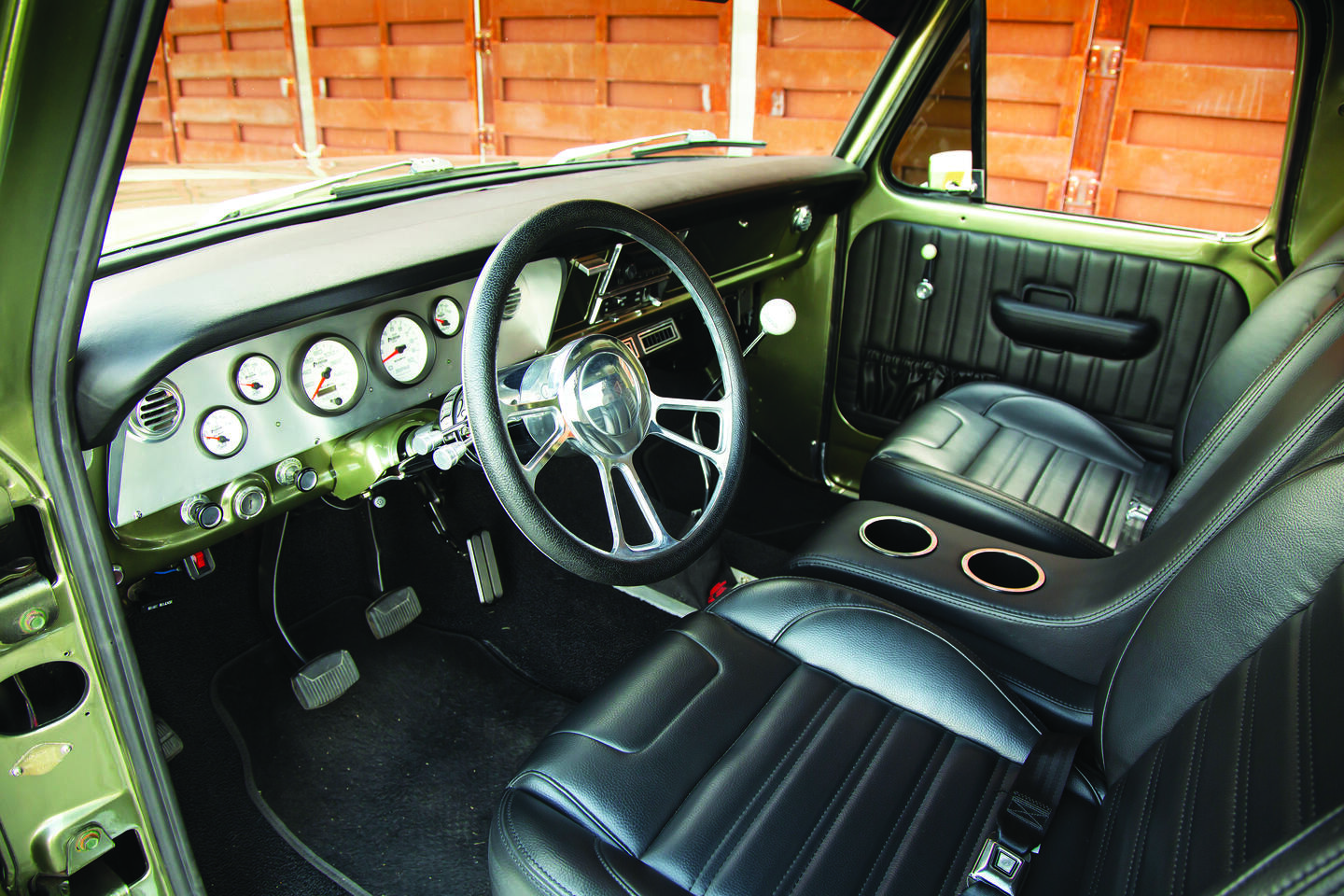 For Matt Girard of Phoenix it was inevitable that he would become an auto enthusiast. Not only is his father into custom cars but his uncle, John, is into them as well. John does play hard and recently purchased the 1968 Lincoln Continental that Mobsteel built in Detroit. We’re not lying when we say the automotive gene runs deep in this family. For Matt Fords are on top of the list, as his grandfather had a 1932 Ford and his father had numerous Bumpside (1967-1972) F-100s. This planted the seed way back for Matt so he had to have a classic Ford truck for himself. 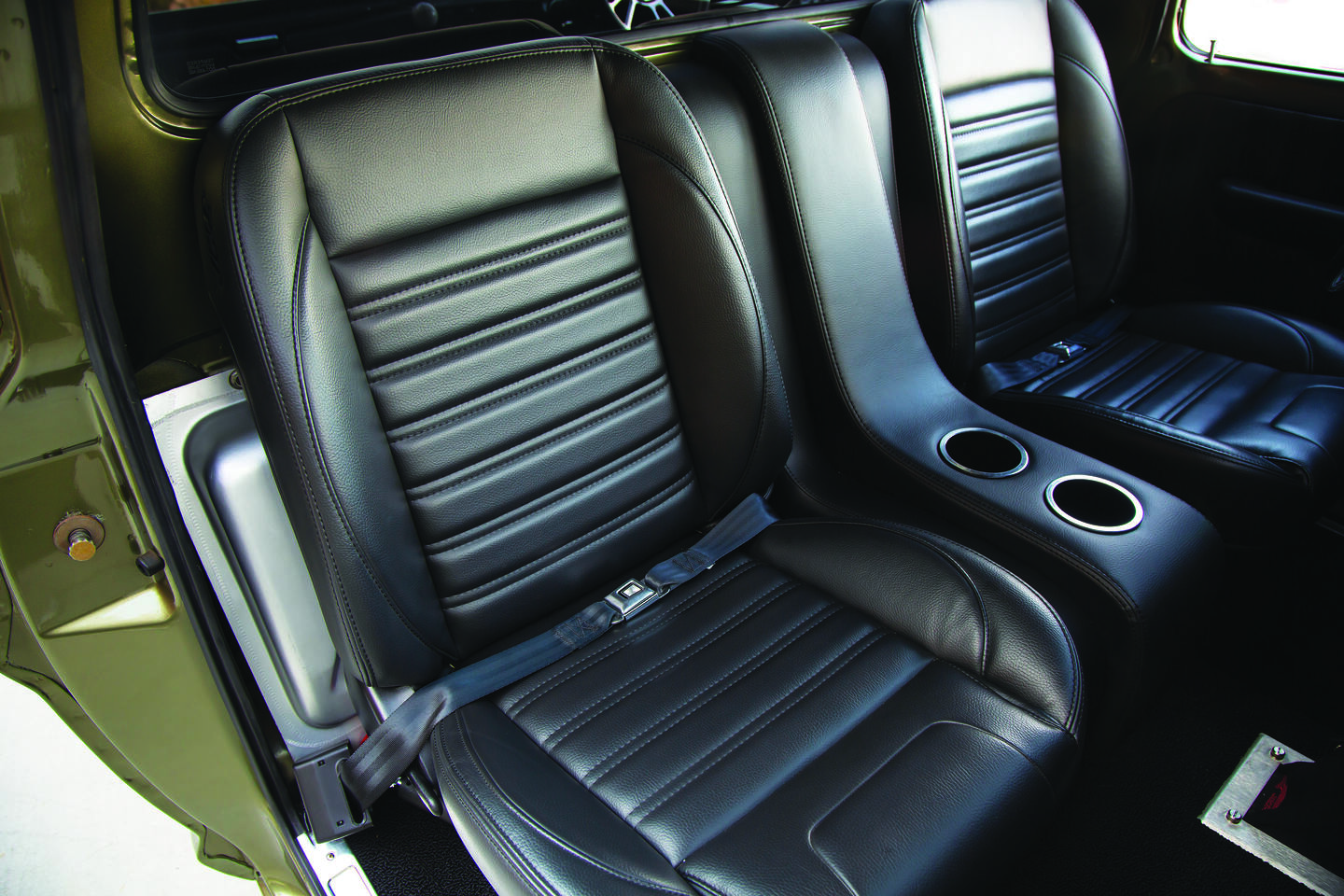 Matt’s quest for the ultimate hauler started before he was legally allowed to drive. At age 16, he had a basketcase 1964 F-100 that was plagued with rust. Matt and his father shared many hours working on the truck together, but they never got to finish it as Matt had to sell it to pay the bills. He moved onto other, more affordable vehicles, most of which were trucks. Though he had fun with the numerous other projects that spun through his revolving door of vehicles, Matt still needed to fulfill his desire for a classic Blue Oval pickup. 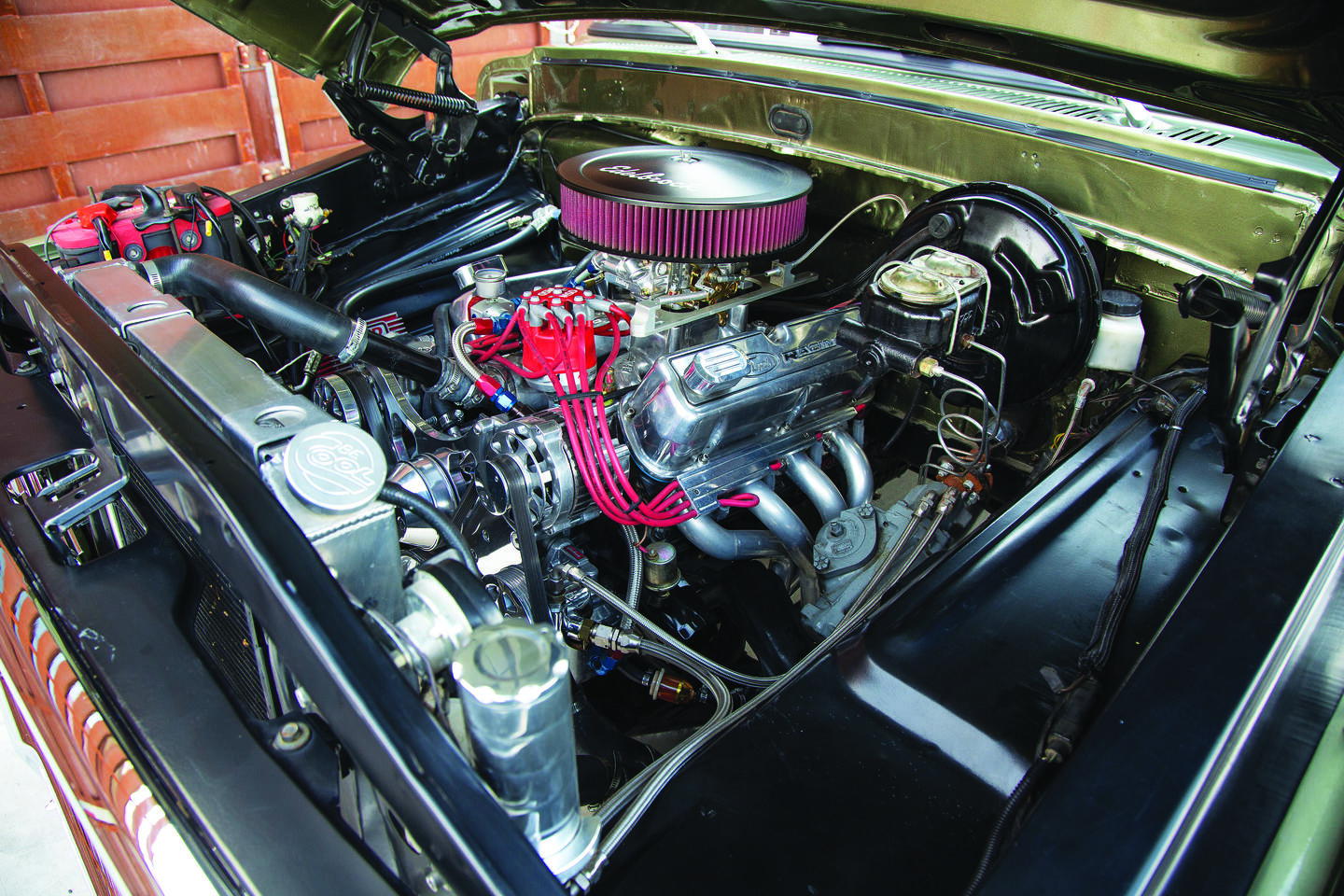 With his ear to the ground, Matt kept looking for a good Bumpside F-100 that would fit the bill. In his search he came across this 1972 model, which was a bit pricey but it had a lot done to it already. Matt figured that the price was right for what was included and decided to go for it. Unfortunately, it got picked up by someone else before he could even get a chance. The truck traded hands again and ended up with Seth Curry in Oklahoma where it would be put up for sale one more time. Matt didn’t hesitate and struck a deal with Curry to get his unicorn of a pickup.

After purchasing the truck, Matt found out that this F-100 had a long history of owners and it was a mystery on figuring out who did what to it. Though there were lots of question marks around it, the guts were good, and the truck was a solid cruiser. Underhood the factory 302ci small-block was replaced by a stroker 347ci version from Roush Performance backed by a TREMEC five-speed manual trans. The engine was also dressed in a few nice pieces, like an All American Billet serpentine kit and an Edelbrock fuel delivery system. Of course optimizing this truck was key and Matt opted to ditch the 850-cfm carb for a Holley 650-cfm version that would let the engine run smoother without the risk of losing air velocity. On the other end is a set of headers from Hedman Performance that led to a 3-inch exhaust with MagnaFlow mufflers. 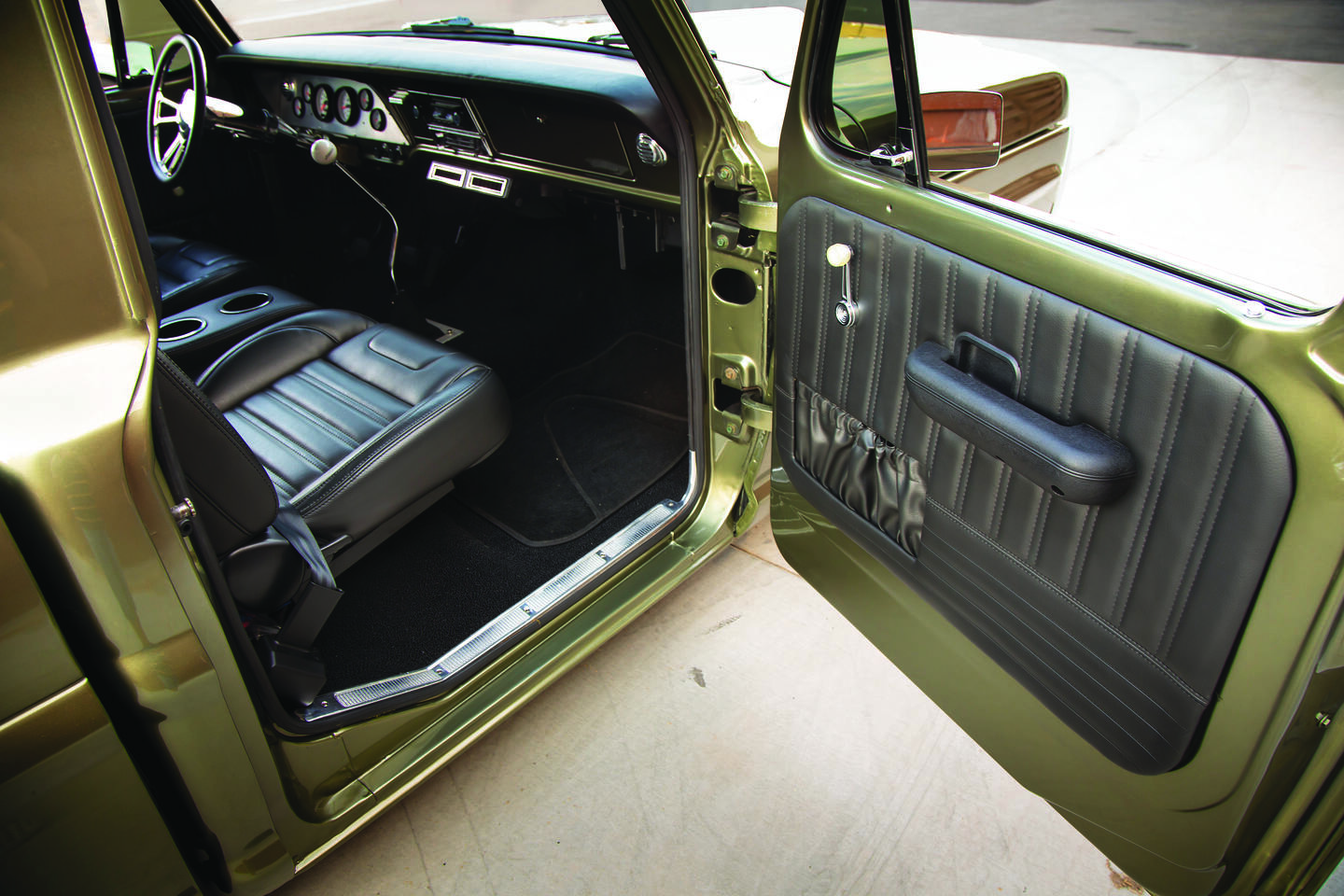 Though the trucks of this era have great lines that are pleasing to the eye, the list of parts available for them is somewhat short. This includes suspension lowering options, as there aren’t as many ways to drop them and keep a smooth ride as there are with same-year GM trucks. Fortunately, the Ford was already equipped with one of the better options up front—it had a set of DJM Suspension Dream Beams combined with coils from Eaton Detroit Spring to lower it down. The frontend was also upgraded with later (1973-1979) F-Series spindles, which allowed Matt to remove the drum brakes and add a disc brake conversion kit from Classic Performance Products. The rear needed some help as the simple shackle kit with leaf springs was an outdated package. Matt scrapped the old setup in lieu of a rear coilover link system from QA1 for better ride and performance. While in the back, Matt dropped in a new set of 4.11 gears in his 9-inch rearend and added another set of disc brakes. 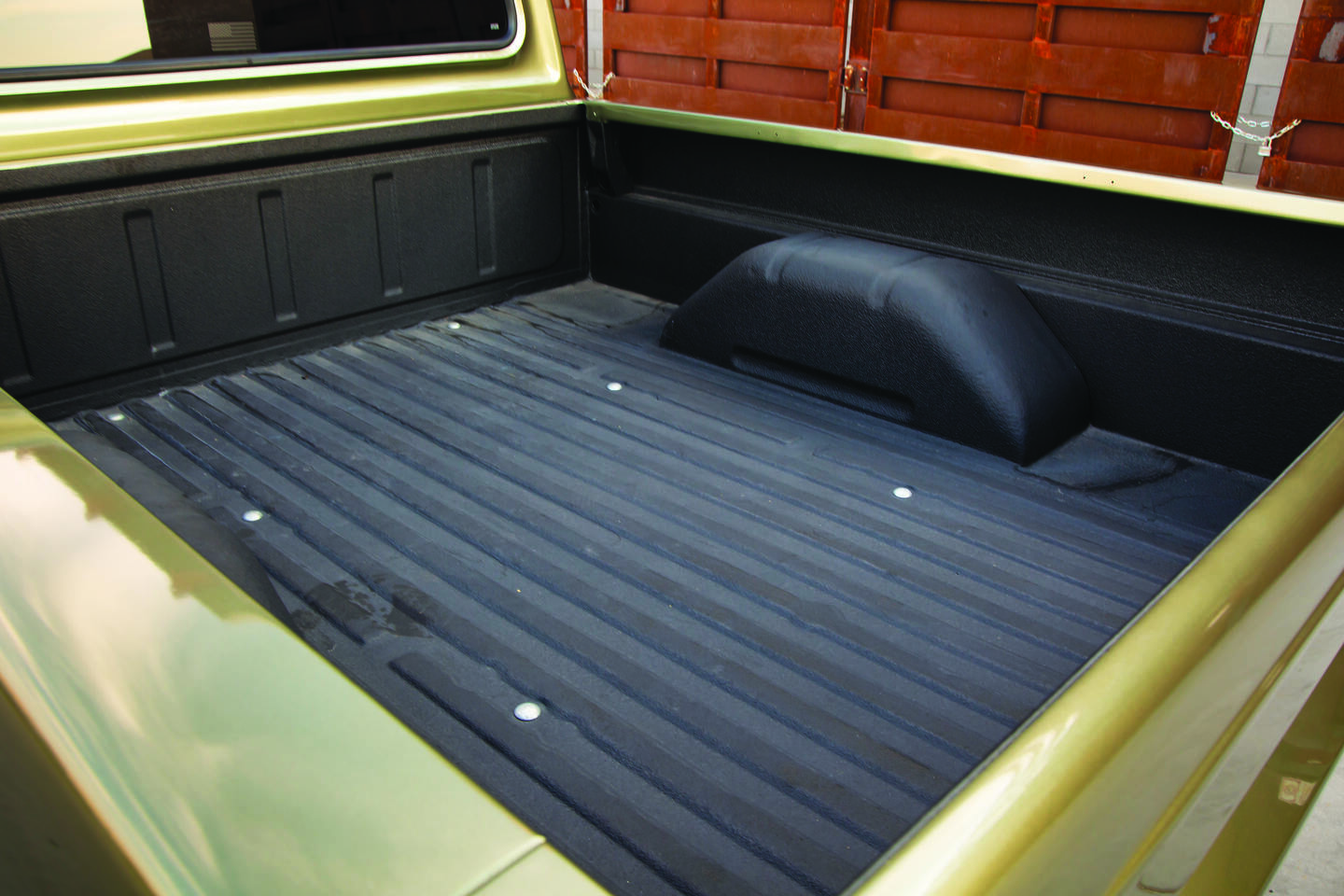 As far as styling was concerned, the truck already had a few mods on the exterior that made it better than the original. Up front, the grille was replaced by one from a 1969 model and has more blinging chrome. On the sides, a set of Kindig-it door handles were implemented and the trim was shaved off. In the rear, the bumper was removed and a roll pan was grafted to the bedsides. It now has a stunning glimmer in the sun as it was coated in Lexus Desert Sage Metallic paint. Matt took things to the next level by adding a set of 20-inch Intro ID321 billet wheels and wrapped them with 245/45ZR20 and 295/40ZR20 Nitto NT555 G2 tires.

The last segment to be filled in order to call this truck a full custom was the interior. Helping with driveability is an ididit steering column with Billet Specialties Vintec wheel. On the dash is a set of AutoMeter gauges and a modern RetroSound radio that fits the original style of this truck. Up top is a molded headliner that has a few speakers and was sourced from LMC Truck. Filling up the rest of the space is a center console, bucket seats, and door panels from TMI Products. 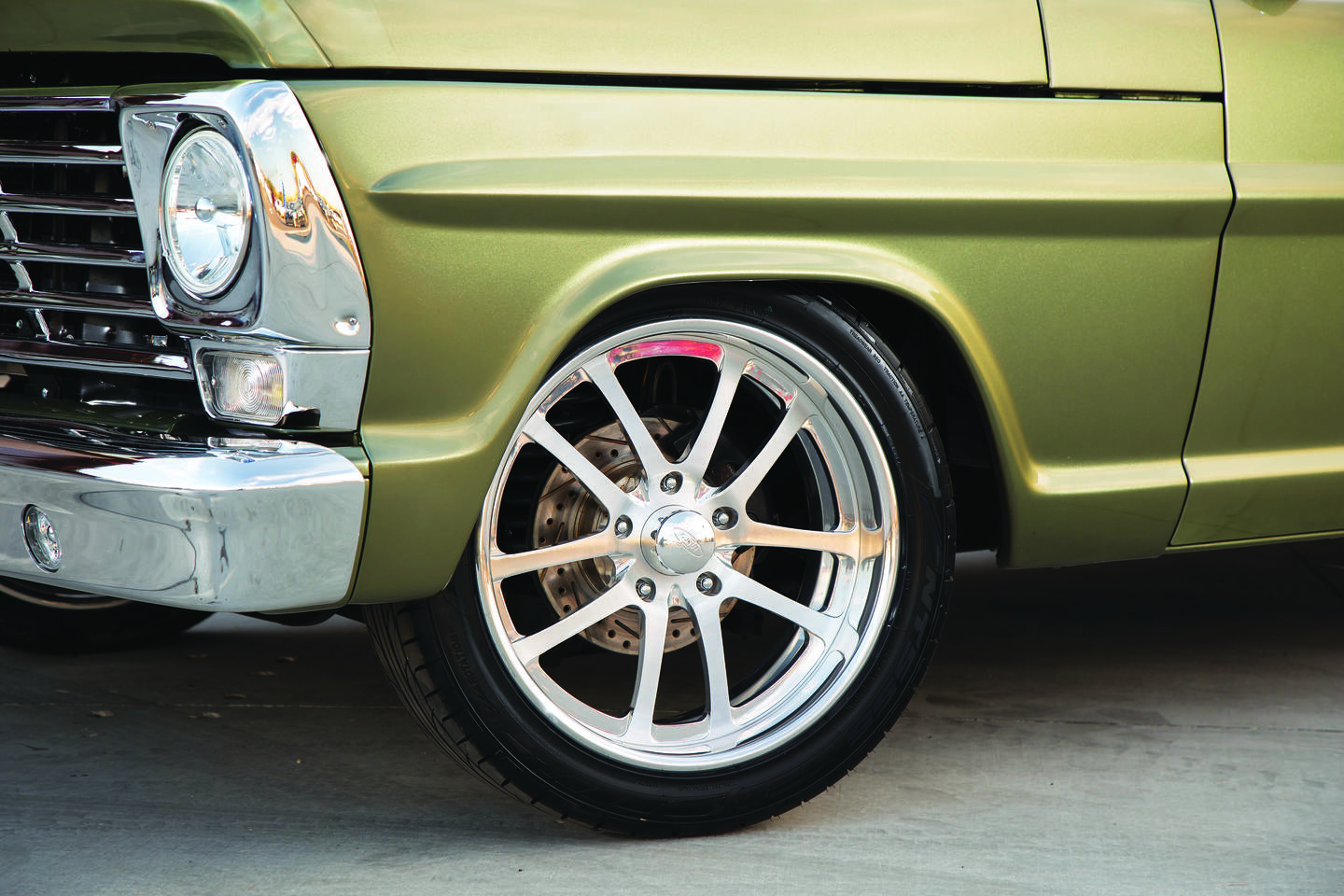 With his F-100 in a completed form, Matt is very pleased with the results. Not only does he have a truck that pays homage to his family traditions, it’s also one rad vehicle that can leave others in the dust. Though customizing one of these trucks can be a bit difficult, the work invested truly lets this baby shine.  CTP