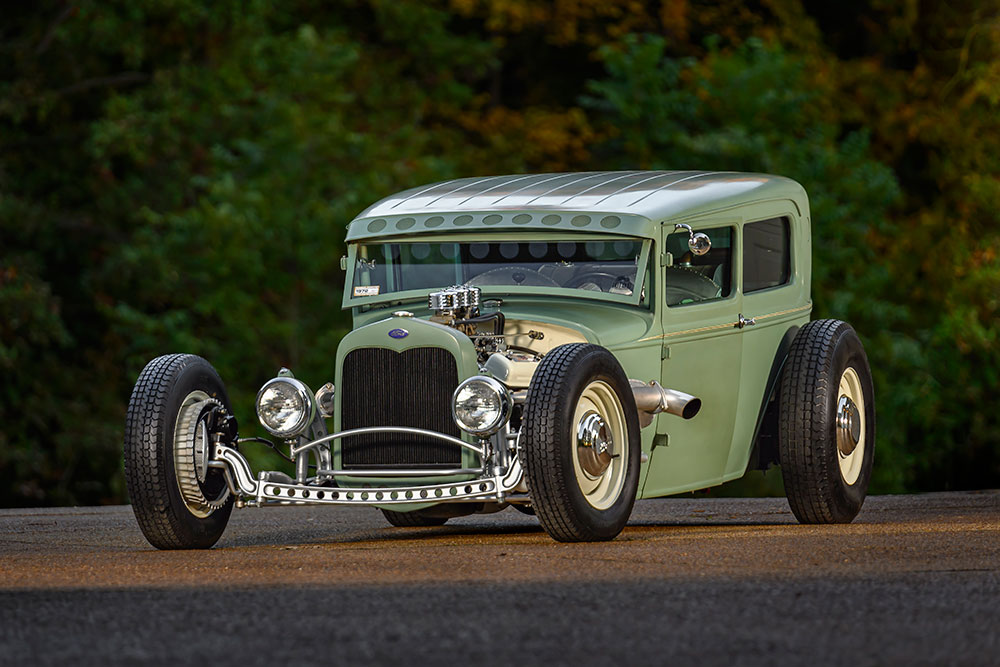 This ’31 Ford Tudor Sedan Is Built From Patience, Persistence, Determination, and Passion

By Shawn Brereton   –   Photography By the Author

We live in a constant quest for perfection. Or we like to think so. Can anyone (or anything) truly achieve perfection? The problem is its immeasurability. What is perfect to you might not be to someone else, and what is perfect to you today may not be tomorrow. Chasing perfection takes patience, persistence, determination, and passion. For car builders, it can destroy the average man. Lucky for us, Gene McCoy is virtually a superhero. The journey to building his vision of a perfect ’31 Ford Model A Tudor sedan is a study of all four characteristics of a perfectionist. 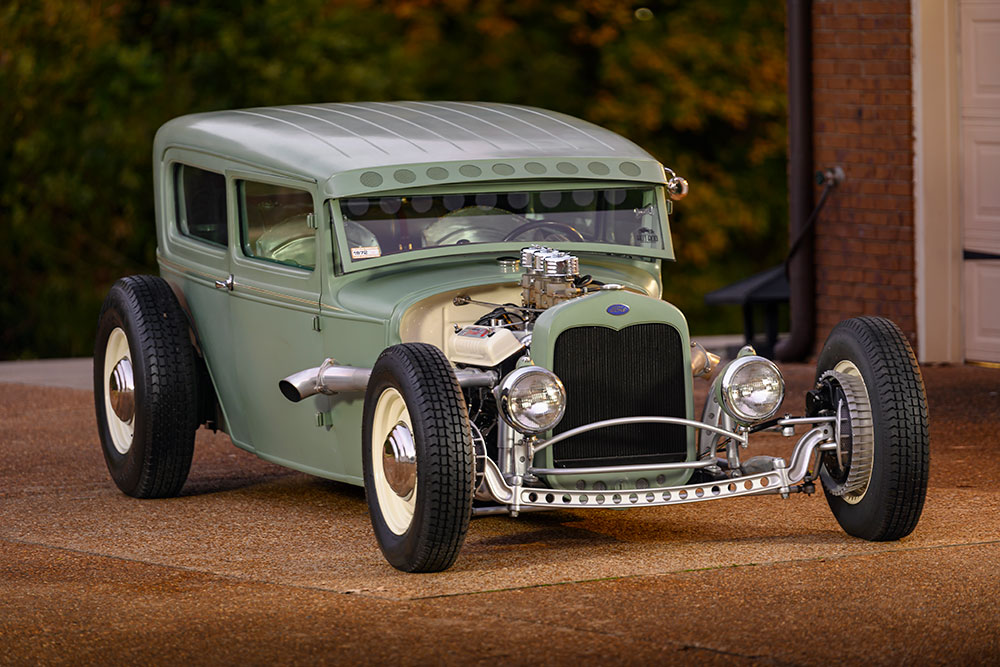 At 70 years of age, Bartlett, Tennessee’s Gene McCoy, is an old-school, old-timer who has been in the car hobby since the late ’60s. He courted his wife, Linda, in a ’67 Plymouth Barracuda but credits the 1975 NSRA Street Rod Nationals for kickstarting his street rod passion. Recently retired after 44 years as a union sheetmetal worker, all of Gene’s acquired skills are evident throughout this exquisite ’31 Ford Model A Tudor sedan. Purchased from his friend David Meek, the project started in 2007 but wasn’t finished until 2018. 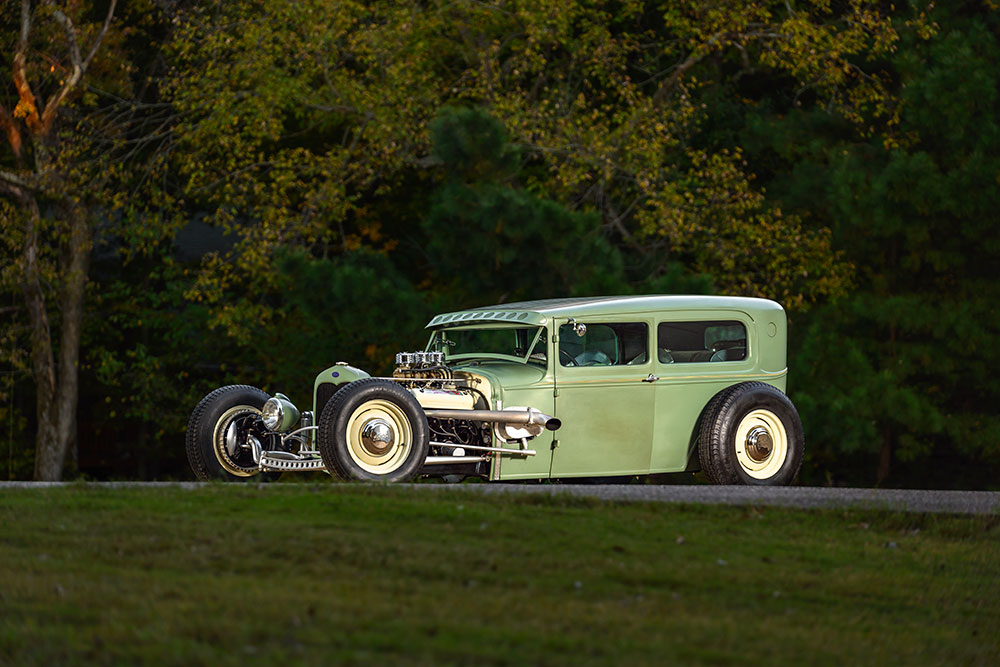 Gene is determined; some might say a little overambitious. A perfectionist at heart, the sedan went through three iterations before Gene was finally happy with it. He admired the aircraft/industrial look and wanted a traditional hot rod that stood out from the crowd—initially building it with a 4-inch chop and gullwing doors. However, six years in and only weeks away from completion, Gene thought the stance was too high. He blew it all apart and reconfigured the chassis, but then it sat too low. Luckily, the third time was the charm. The body came off and back on more than 15 times throughout the process. Talk about persistence. 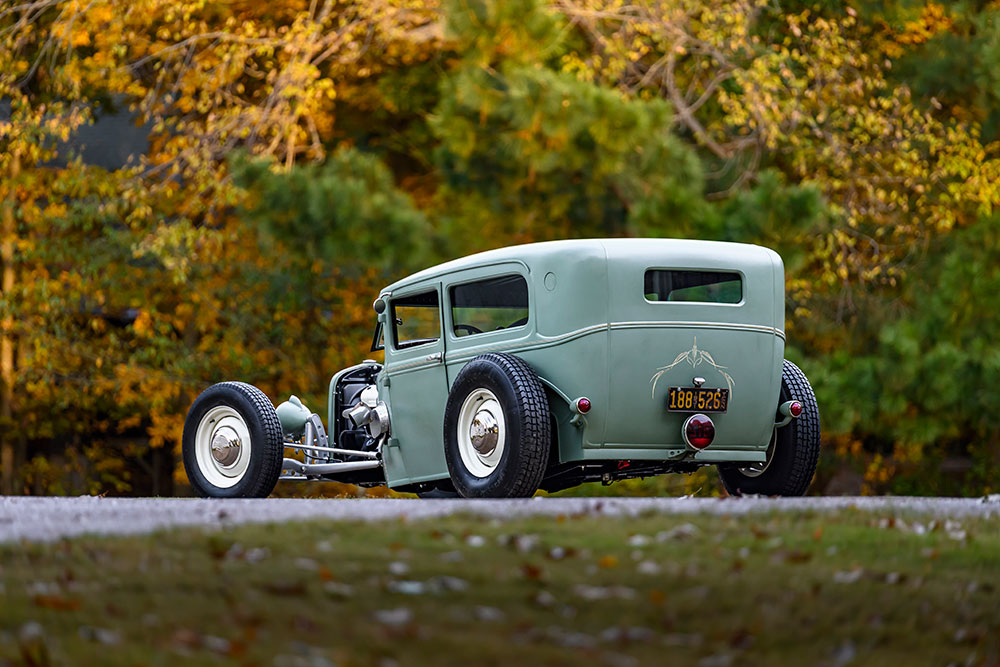 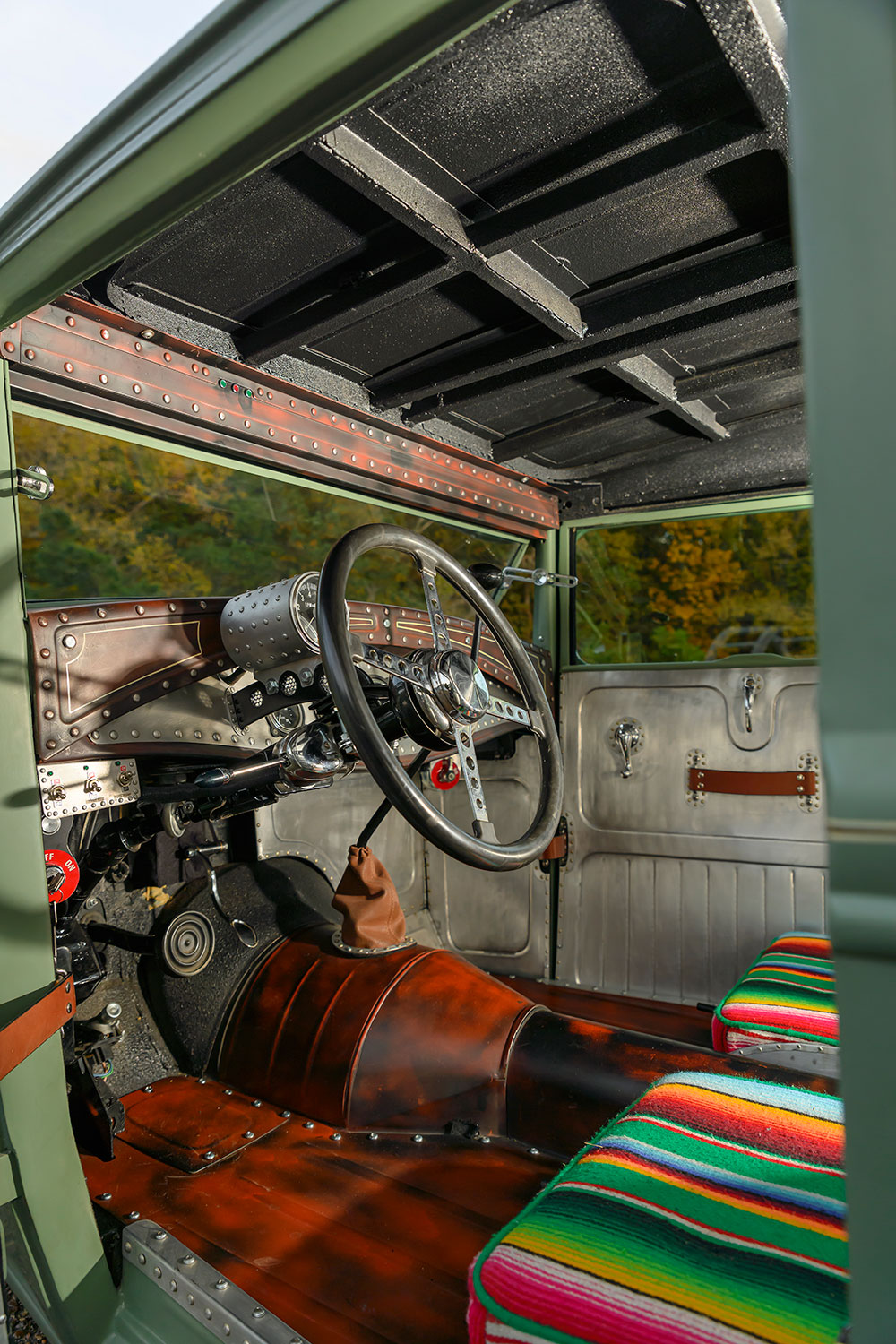 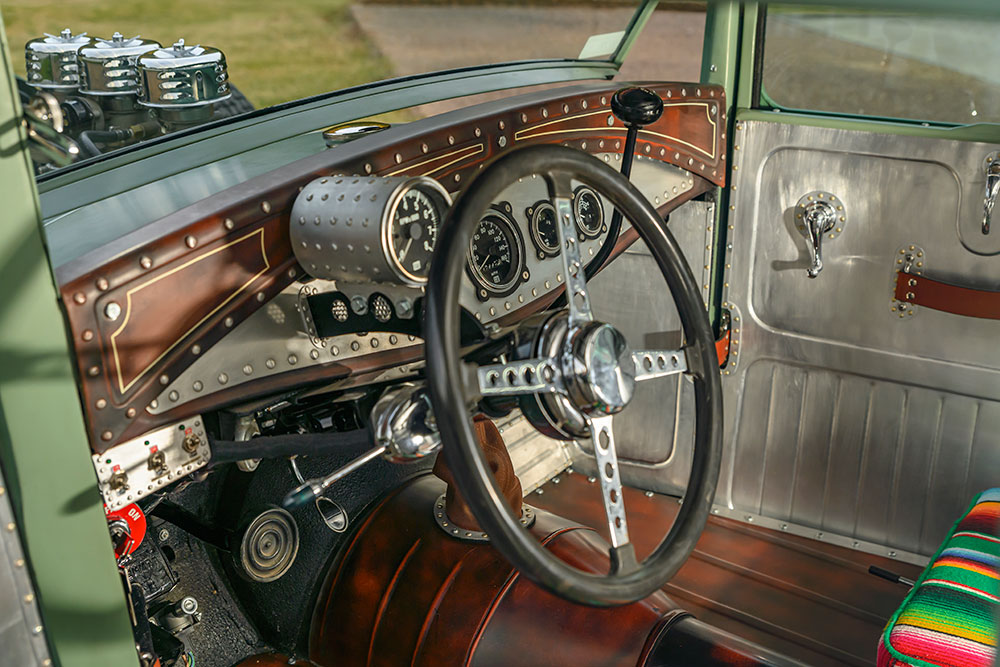 Gene desired to keep this build all-Ford, so he went for a classic ’55 292ci Ford Y block punched 0.30 over with a C4 automatic transmission behind it. BB&T Racing in nearby Horn Lake, Mississippi, did the machine work and installed the Racer Brown Camshaft. Gene had to make sure the engine looked awesome with no engine cover, so he painted the block black with Cool Vanilla–colored “Thunderbird Special” valve covers. It’s topped off with a classic 3×2 setup with Holley 94 carburetors sitting on an Offenhauser intake. A Carter electric fuel pump keeps fuel flowing while K&N air filters hide beneath louvered chrome air cleaners. An EZ Wiring harness routes the juice from an Optima battery to a stock starter and distributor with a PerTronix ignition module. Gene says the 2.25-inch-diameter custom Lakester headers are left open “as God intended.” 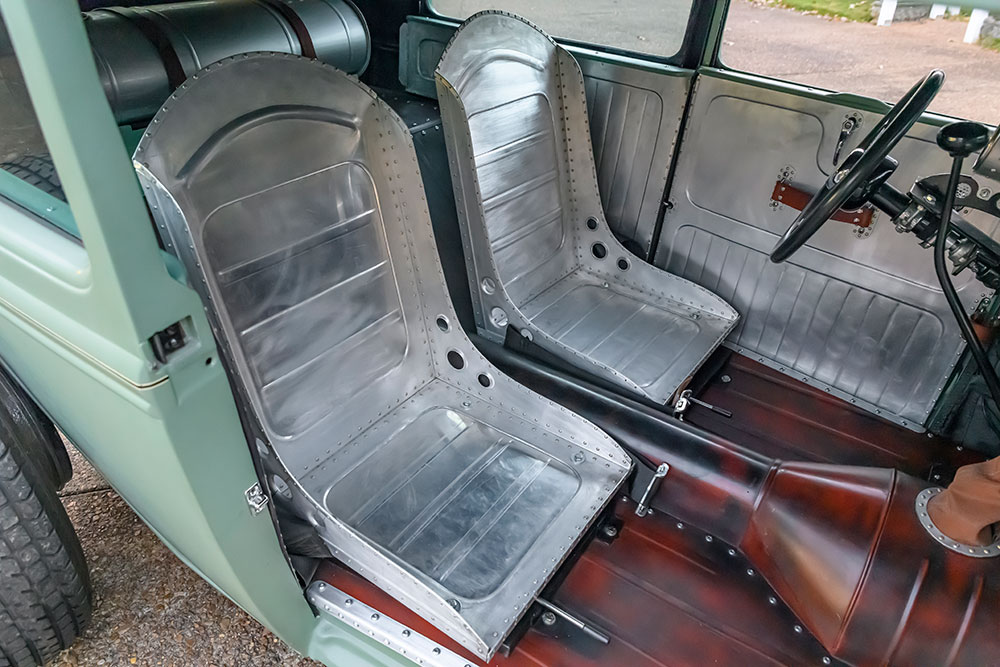 Now we get to the part that really sets this build apart from the crowd—the body and interior. Gene is a sheetmetal worker with a keen eye and attention to detail, something seldom seen in a backyard builder. If passion, patience, and determination were visible, you could see them oozing out of every panel. 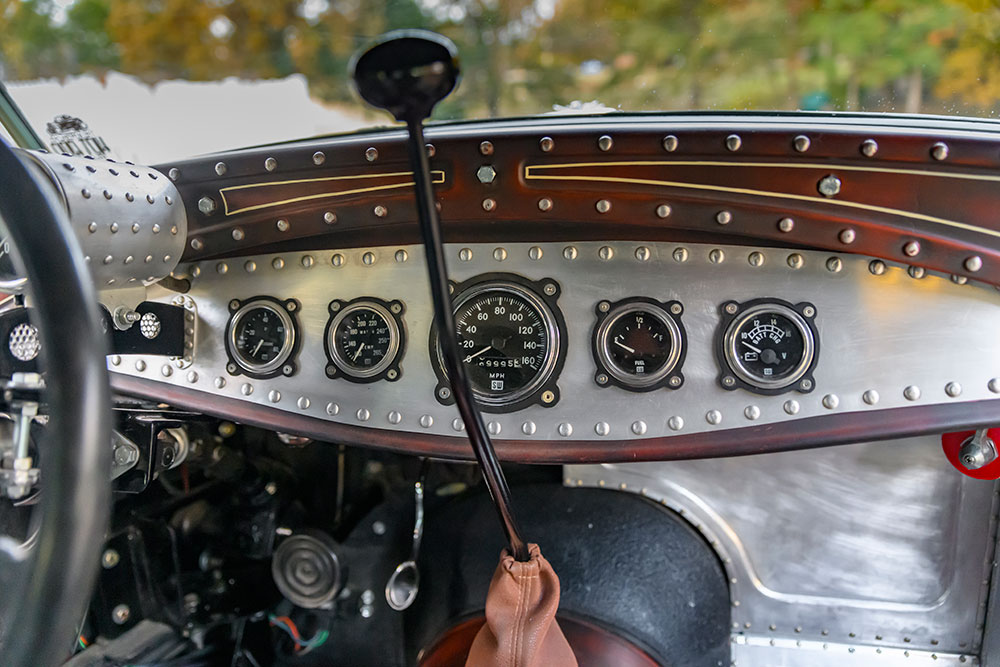 Let’s start with the structure of the original ’31 body. As mentioned earlier, Gene originally built this sedan with gullwing doors and a fully louvered roof. To make it work required a rigid structure. “This car could probably survive a rollover if it had to,” Gene says. After scrapping the gullwing idea, he kept the roof structure underneath before grafting on the roof of a ’59 Ford wagon and adding a visor. 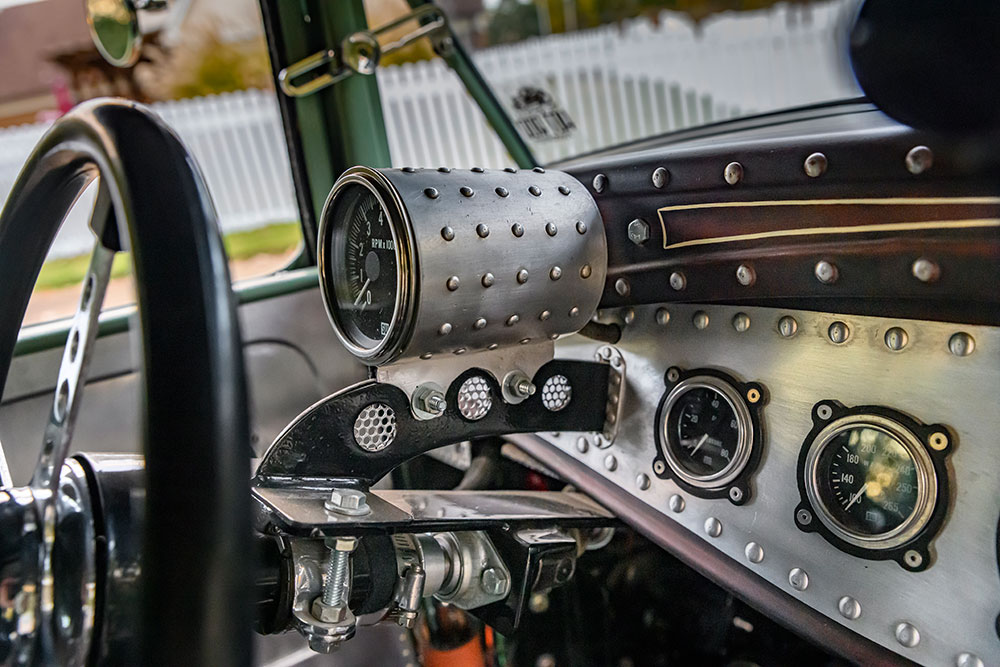 To achieve the rake and stance he wanted on the Z’d frame, Gene channeled the body 6 inches in the front and 4 inches in the rear. He also flipped the firewall to have enough room for the long Ford Y block engine before entrusting the bodywork and paint to Darwin Allbritton. Allbritton laid down the PPG Dawn Gray with satin added to dull the finish and Cool Vanilla accents while Alberto Devilla expertly pinstriped it. 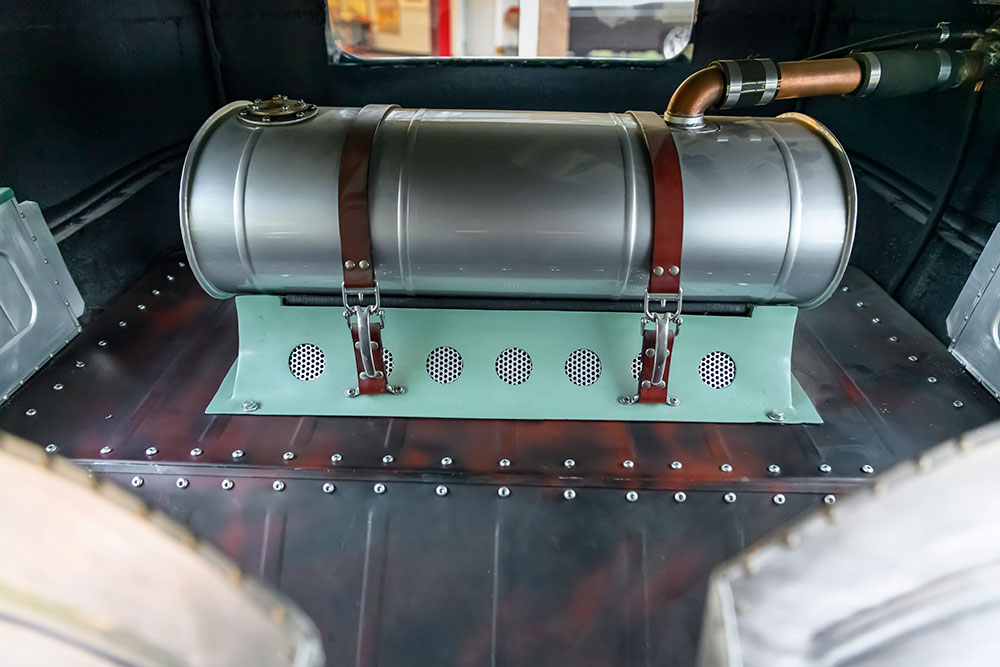 The interior, entirely fabricated at home, is a masterclass in how to make a tasteful statement. Drawing on his love of aircraft, everything except the seat cushions is steel, aluminum, or leather. There are thousands of rivets within the small confines, yet no one would say it’s overdone. Gene credits a Hot Rod magazine (originally appearing in Street Rodder) article written by Frank Wallic as his inspiration to start building seats and buck riveting—both being a practice in patience. 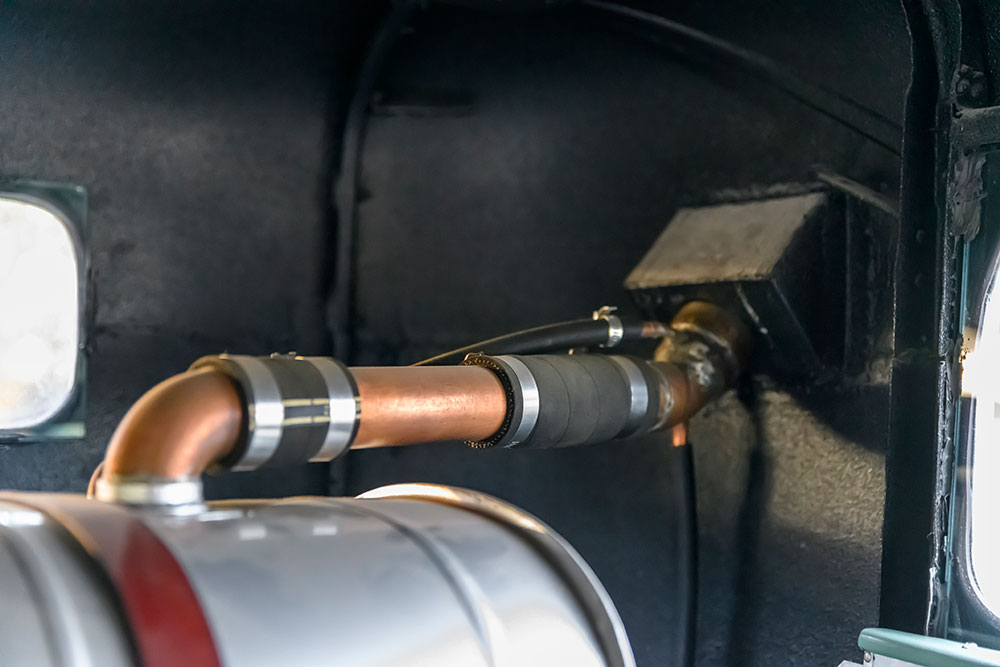 The bead-rolled and riveted bare aluminum door panels show off Gene’s stellar sheet metal skills. Attention to detail abounds with rivets around the leather door pulls and handles. So that the interior didn’t look like a sea of bare aluminum, he used a technique where he painted the floor panels black, then came back with red oxide and rubbed through it—it looks just like leather. 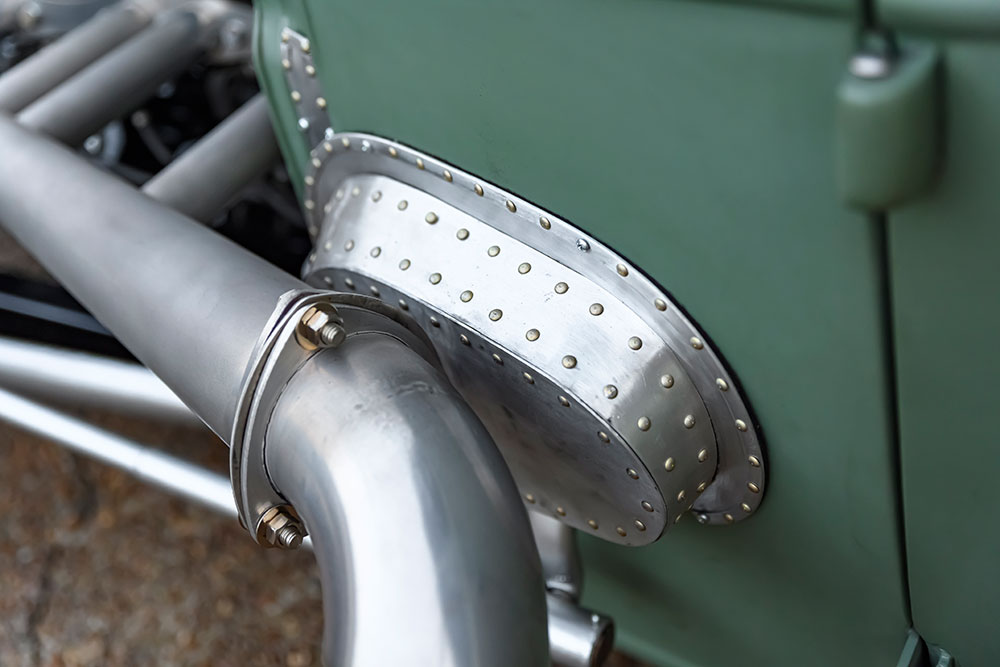 He carried that theme upward as accents on the steel and aluminum dash filled with period-correct Stewart Warner gauges. The tach makes a statement sitting front and center above the custom steering column with a Sprint Car–style LimeWorks steering wheel. Meanwhile, a tall Lokar shifter with a leather boot completes the look and feels right at home in the chopped sedan.

The homemade bomber seats are so gorgeous that you almost hate to put a seat cushion in them, but Gene knew the interior needed a splash of color. He found the perfect Sarape blankets on a vacation cruise to Cancun, Mexico, with his wife. The blankets provide just the right amount of pop while complementing the exterior. Lastly, Gene custom built a mount and a Ford Model T-styled aluminum gas tank with a copper filler tube held down with leather strapping to finish off the interior. 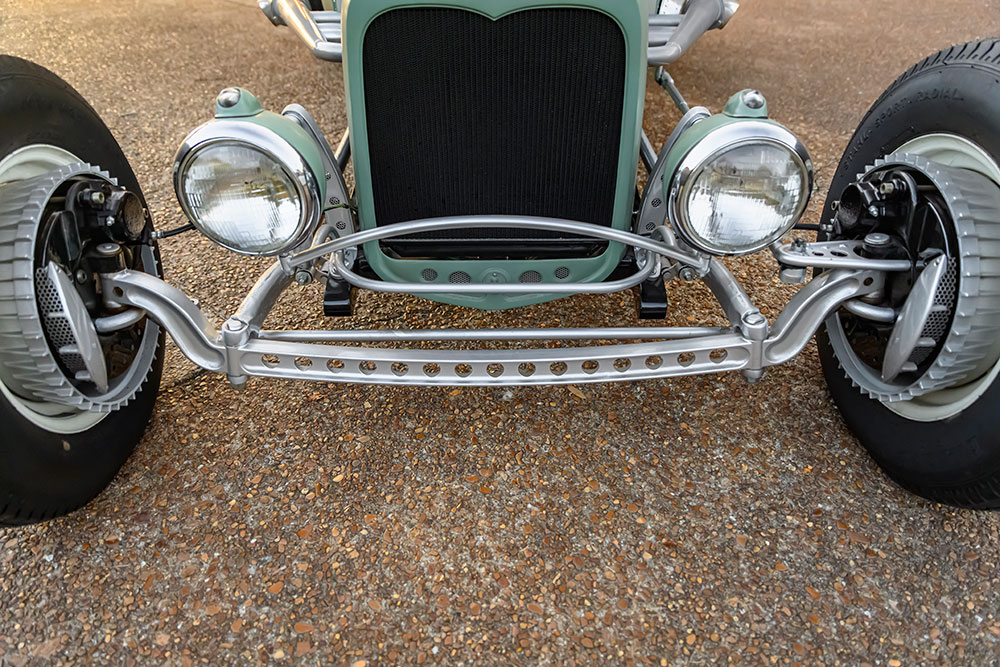 Read More: How To Update The Front Suspension On Your Ford Model A

Despite being retired, Gene doesn’t get to drive the car as much as he’d like. But that is OK with him; he is enjoying his time doing what he loves. When you possess the sheetmetal talent he has, your services are often in demand. Last year, he was called upon to create a hood for a Midget formerly owned by Elvis Presley, which is now in the museum at Graceland. He is also way too busy building hot rods in his home shop. Gene has five personal vehicles in different stages as of this writing—any one of them could easily grace these pages. He is that good. 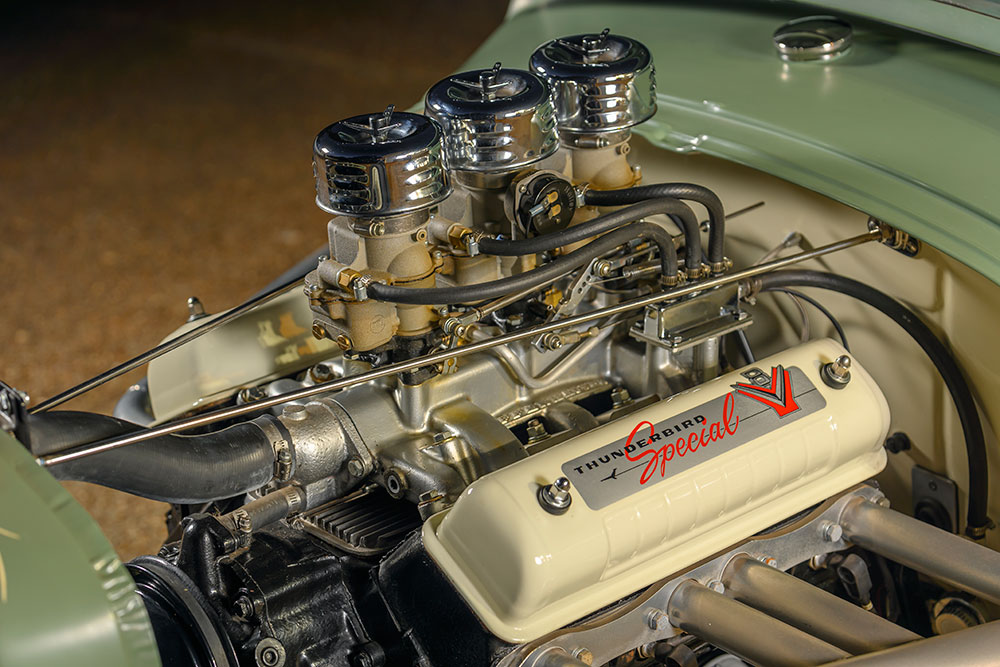 Gene is a quiet, unassuming, humble guy, one of those rare people in life who just puts in the time and effort to chase perfection. Did he achieve it? That is up to the eye of the beholder, but Gene McCoy’s ’31 Ford Model A Tudor sedan proves that one man with patience, persistence, determination, and passion will always achieve some level of perfection. He’s happy with it and that is all that matters. MR