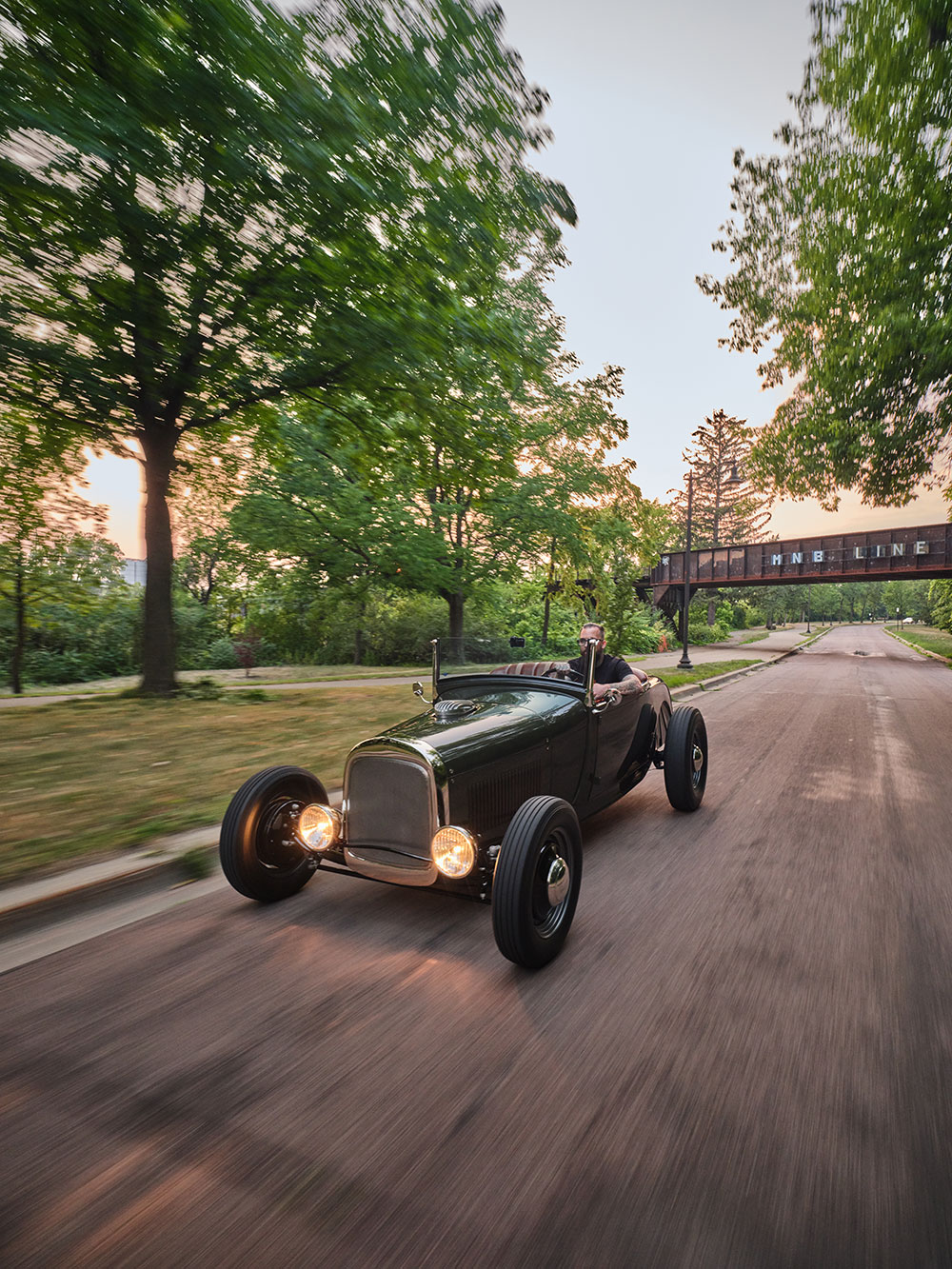 Jon Cumpton’s Fenderless 1929 Model A Roadster Was Built To Be Driven!

There’s no doubting the traditional build style of this 1929 Ford Roadster. It’s how Jon Cumpton of Roberts, Wisconsin, went about it, guided by the trained eye of Jordan Dickinson, Mike Norrie, and the staff of Union Speed and Style of Osseo, Minnesota. Here’s how to build a traditional-looking Model A hot rod V8 yet have it be so like minded with today’s driving practices. 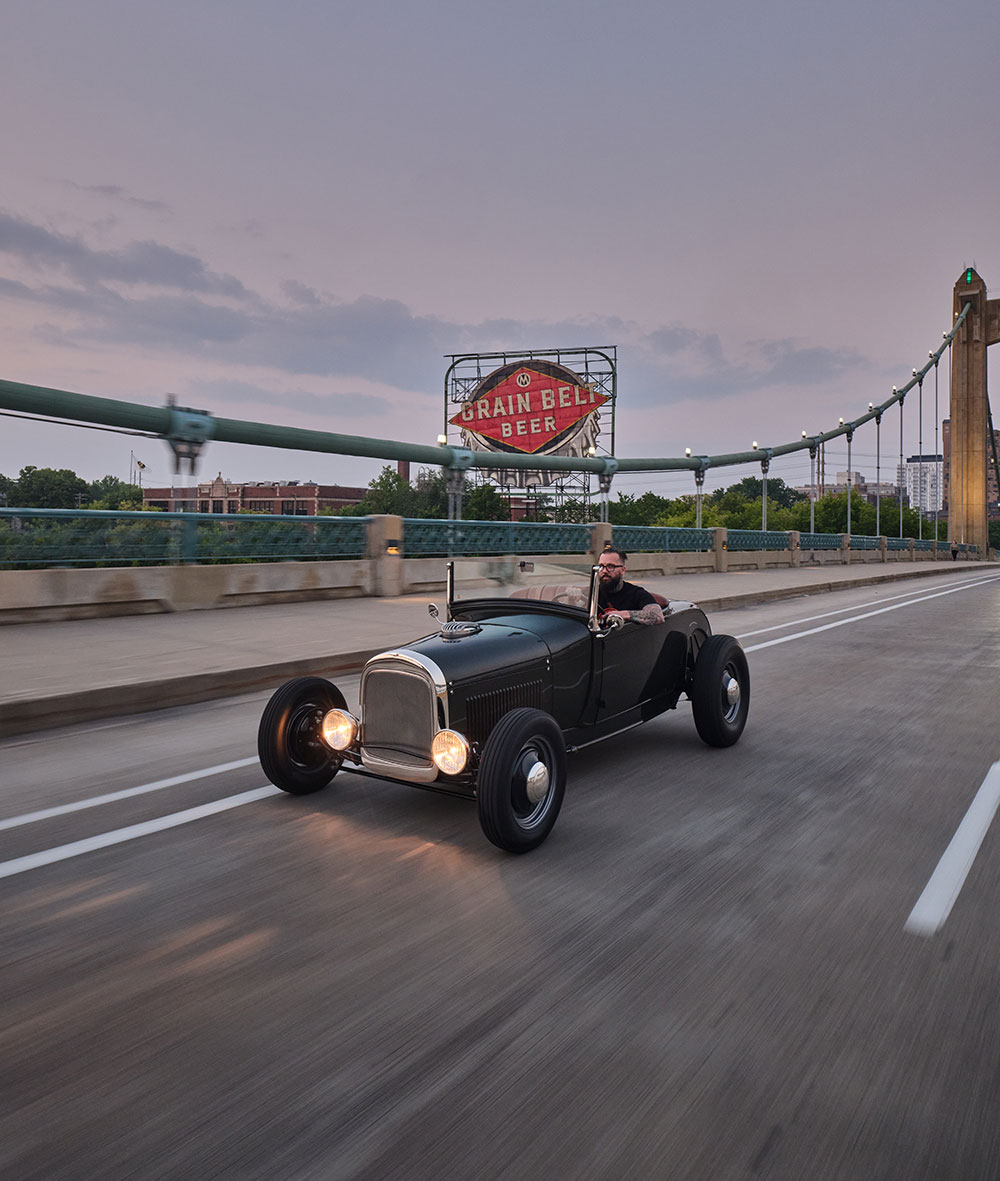 It was in Jon’s mind that he wanted a postwar hot rod, or what we commonly have come to call a “traditional build.” In his eyes he saw a Model A sedan but a visit to Union Speed and Style changed that dream. It didn’t take long after eyeing a Model A roadster with Dickinson that the plans changed. The traditional look was paramount but along with this newly minted hot rod it had to be driveable. That would be the result, a driveable traditional V8 Powered Model A hot rod with the looks and performance to keep Jon happy and often behind the wheel.

The 1929 Ford Roadster with its minimal channel is a driver that includes a 500-plus mile road trip where Jon and his son, Heart, went from home to Des Moines and back. To this the hot rod has taken home the Goodguys Editor’s Choice and Goodguys Builder’s Choice by Hot Rods by Dean. Over 3,000 miles have been racked up with plenty more to come. 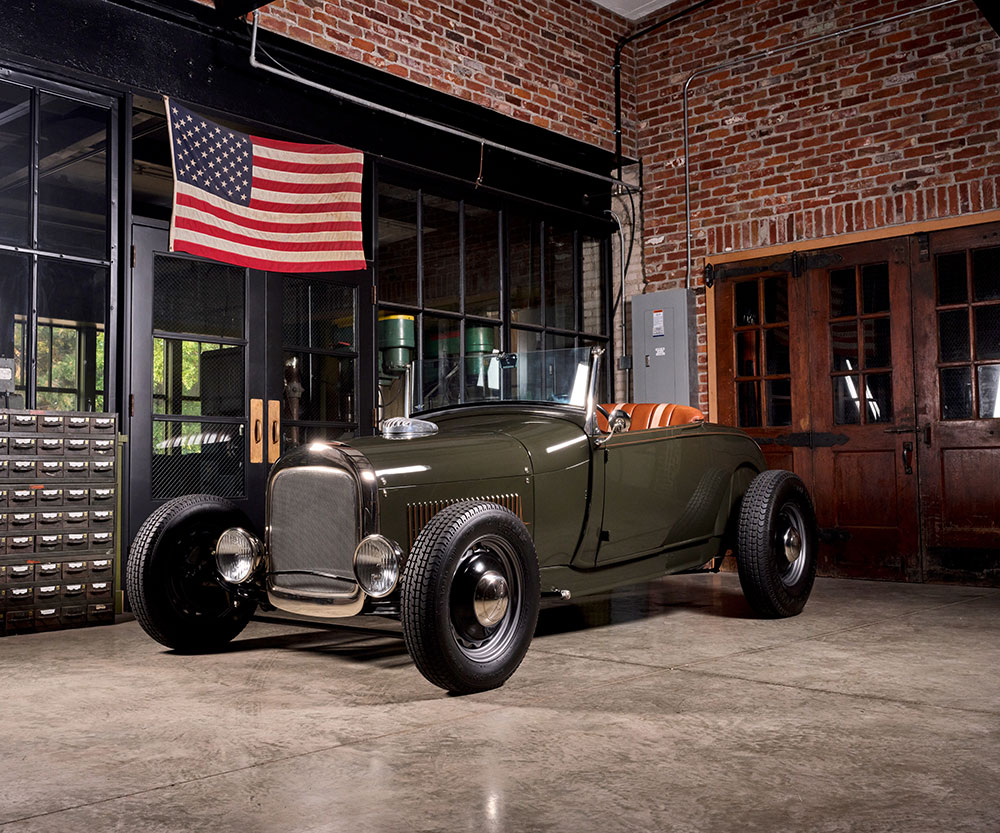 Read More: How To Update The Front Suspension On Your Ford Model A

There’s always a lot to look at with a traditional build. This can especially be said for the Ford Flathead V8. In this case it’s a 276-inch motor. (One can achieve this displacement by using a 1948 or earlier Ford Flathead at 255 inches and bore it. Throw in a 1949 and later Merc crank with a 4-inch stroke and you’re in business. From here you begin with a 3-3/16-inch bore and 3-5/16-inch stroke. Increase the bore by 1/8 inch to 3-3/4 inches and the stroke by a ¼ inch to 4 inches. When you are done you have a 276-inch Flathead engine.) 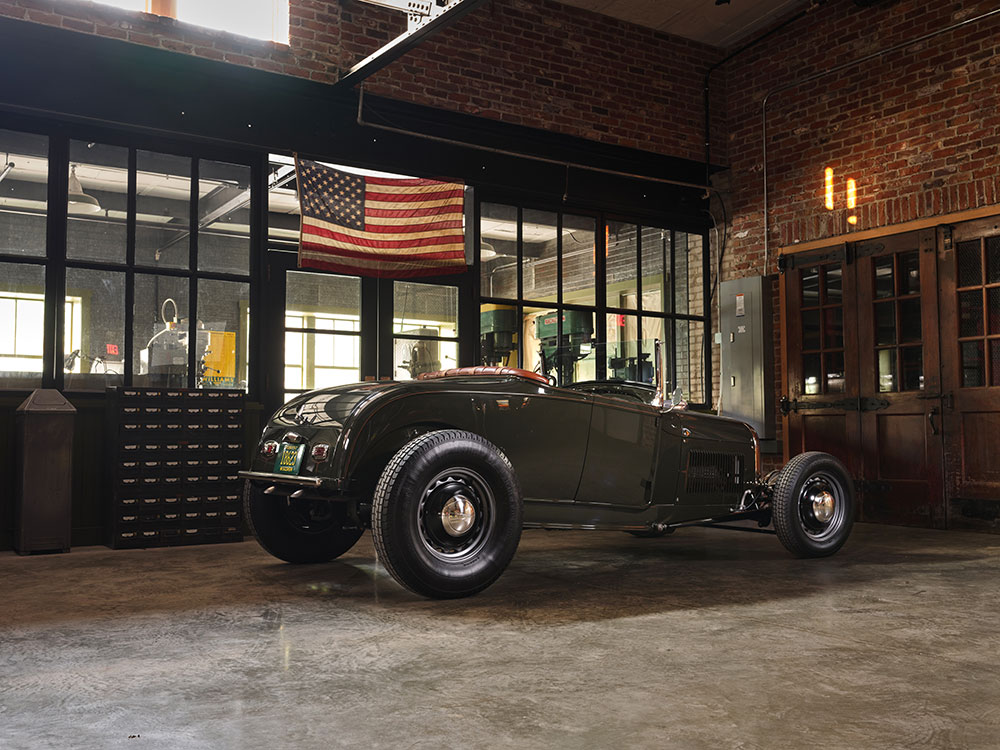 Rick Schnell took a running Flathead engine out of a 1940 Ford and began the rebuild. He processed the machine work through final assembly, which included the obligatory porting and relieving oftentimes performed on a Flathead block. Edelbrock cylinder heads with a Thickstun high-rise dual carb intake manifold were bolted to the block and then a pair of Stromberg 48 carbs were attached. Feeding the fuel is a Carter pump and you will note the Thickstun air cleaner. Adding to the vintage appearance are cloth-covered wires with Rajah 90-degree plug ends, a Blue Streak ignition coil, and a PerTronix distributor. Exiting the spent gases are a pair of custom headers coupled with straight pipes measuring 2-inch stainless steel tubing all fabricated at Union Speed and Style. We would mention mufflers but we are pretty sure we would get a “Hell no!” Other engine accessories include the Powermaster starter and PowerGen alternator and a GC High Performance fan. 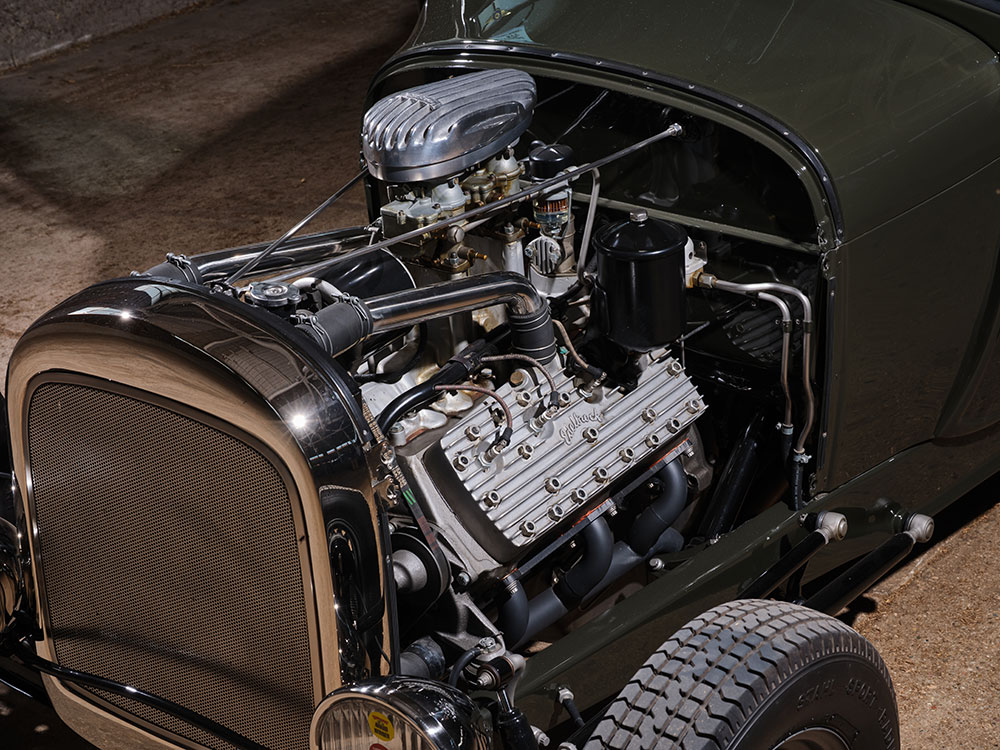 Backed up to the Flathead is a Chevy S10 T5 transmission via a Cornhuskers Transmission Conversion Package with a Lokar shifter handling the mechanics. Union Speed and Style spun up an adapter that links the Millworks Hot Rod Supply Early V8 Top Loader shift knob to the Lokar mechanics to move between the gears. This combination then moves the power back to a 1940 Ford “banjo” rear end stuffed with 3.78 gears. The axles were converted by Hot Rod Works out of Idaho allowing for the OEM Ford large bearings that are compatible with the Lincoln backing plates. Also used are slide-in-style 9-inch Dutchman axles. Lincoln drum brakes conversion from Boling Brothers are used in the front and back. From here Union Speed and Style cut venting holes into the backing plates and added drilled screens. The master cylinder is a cast aftermarket reservoir. 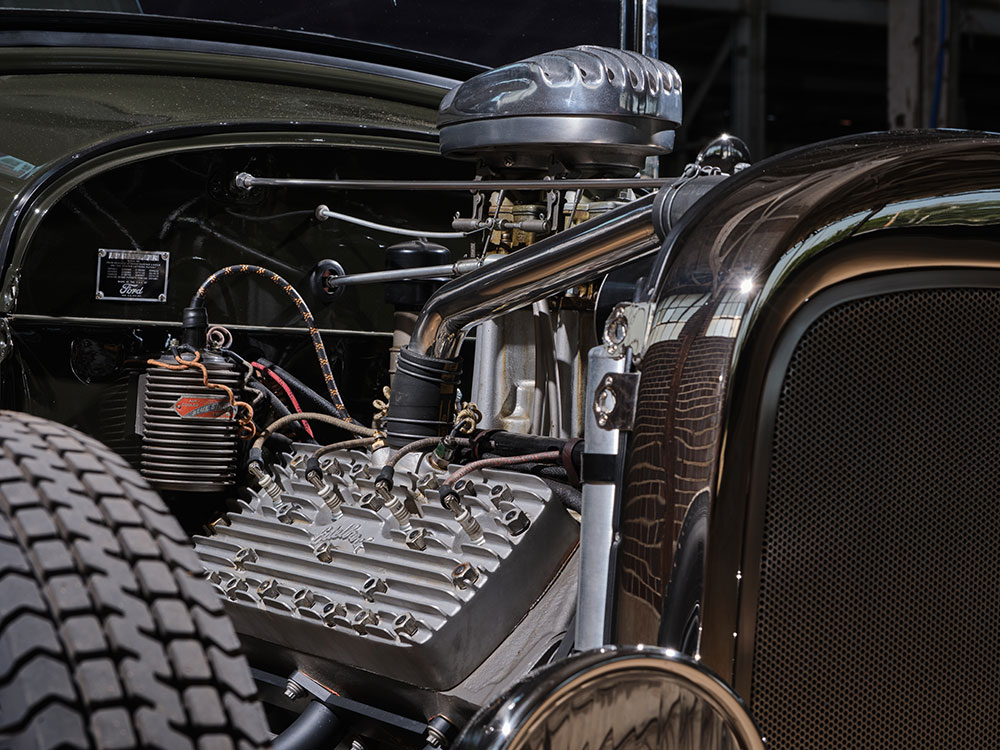 The stamped repop Deuce frame rails were modified by Union Speed and Style. These ’rails were recontoured to better match the flow of the Brookville Model A Roadster body. The front frame horn area was also “pinched” to bring together the frame to the width of the Model A grille shell. Look closely and you will notice that the body has a subtle 1-inch channel over the ’rails enhancing the appearance. The boxing plates were drilled and dimpled, Union Speed and Style then used their dimpled X-members. Union Speed and Style Model A–style front and rear crossmembers where then fitted yielding a one-off frame. 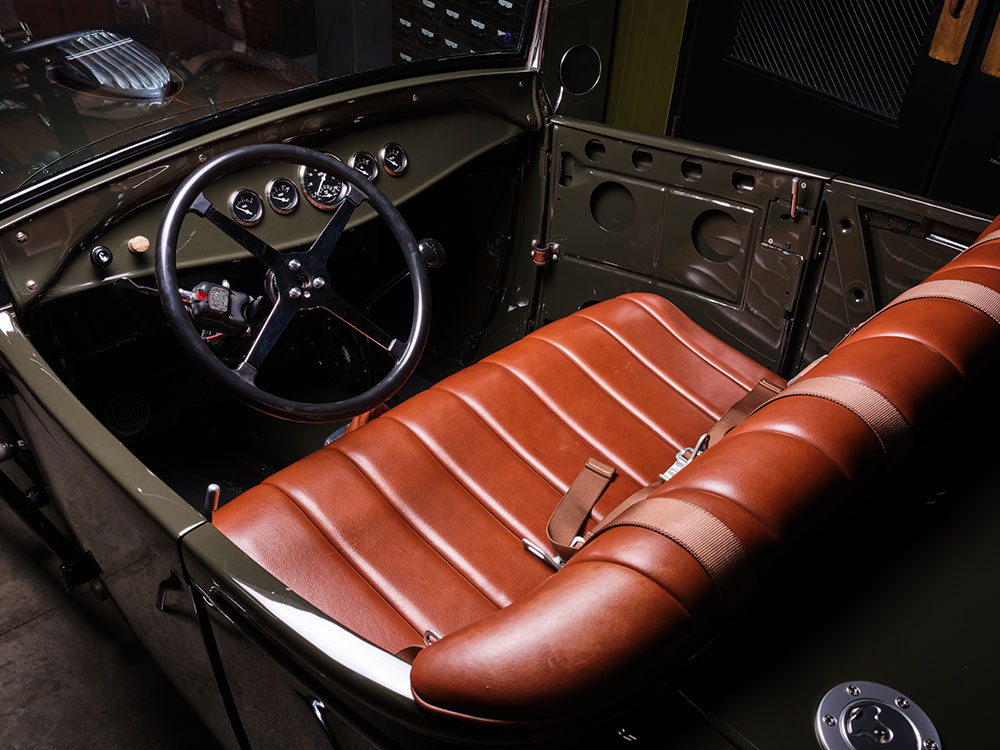 The front axle is a 1932 Ford “heavy” (originally a truck application) with the transverse leaf spring mounted behind the axle. Other front suspension items include early Ford spindles (1937-41), a pair of SO-CAL Speed Shop tube shocks, and a ’40 Ford steering box. Next came the Union Speed and Style custom steering column fitted with a Schroeder four-spoke wheel via a removable mount and vintage turn signals. In back the use of ladder bars, a transverse leaf spring, more SO-CAL shocks, and Boling Brothers Lincoln drum brakes can be seen.

You will find that this hot rod rolls around on Ford artillery wheels with a “wide five” bolt pattern (5-on-5.5). The original 16-inch wheels are wrapped with Coker/Excelsior Stahl Sport, 5.50R16s in front and 7.50R16s in back. 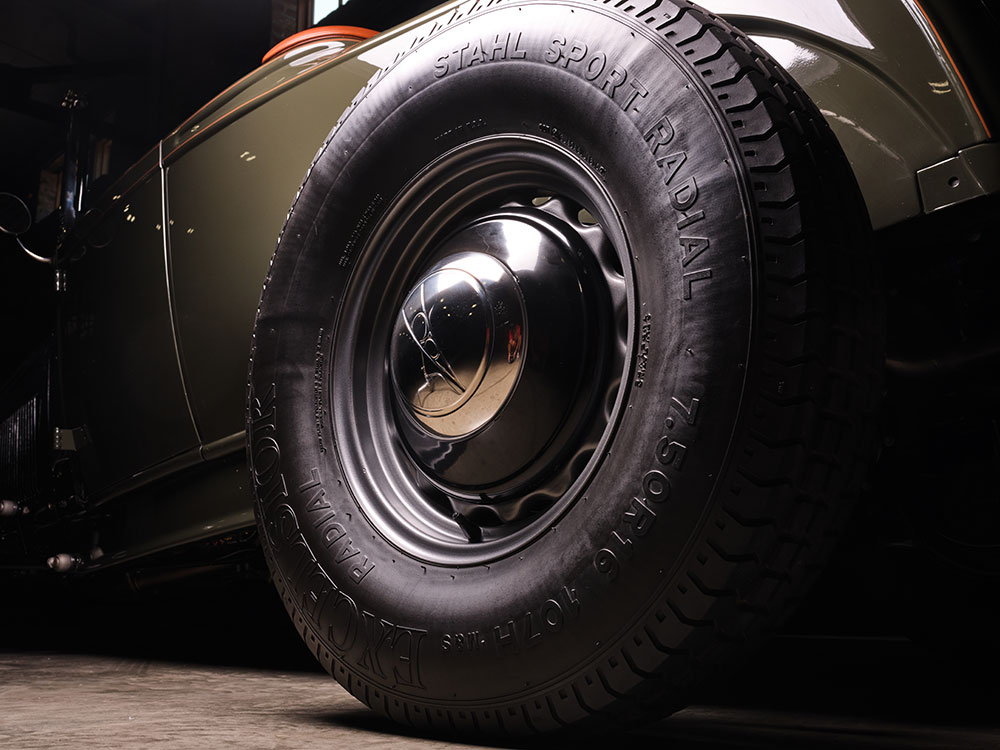 Already mentioned is that the Brookville body is mildly channeled. Well, along with this mod came the shortening of the cowl by an inch. These modifications allow for the “straighter” Model A body to better fit the reworked curve of the modified frame rails.

(Editor’s note: For 1928-29 Model A fans you will notice that the vertical bodyline, where the cowl, just forward of the door hinge mounting position, meets the frame, there’s a slight forward upward “swoop.” On a stocker, just below this point, you would see a leftover mounting point from the days when these bodies were originally crafted by woodworkers who made wooden wagons before steel bodies. Every now and then we see builders remove this element; nice touch. —B.B.) 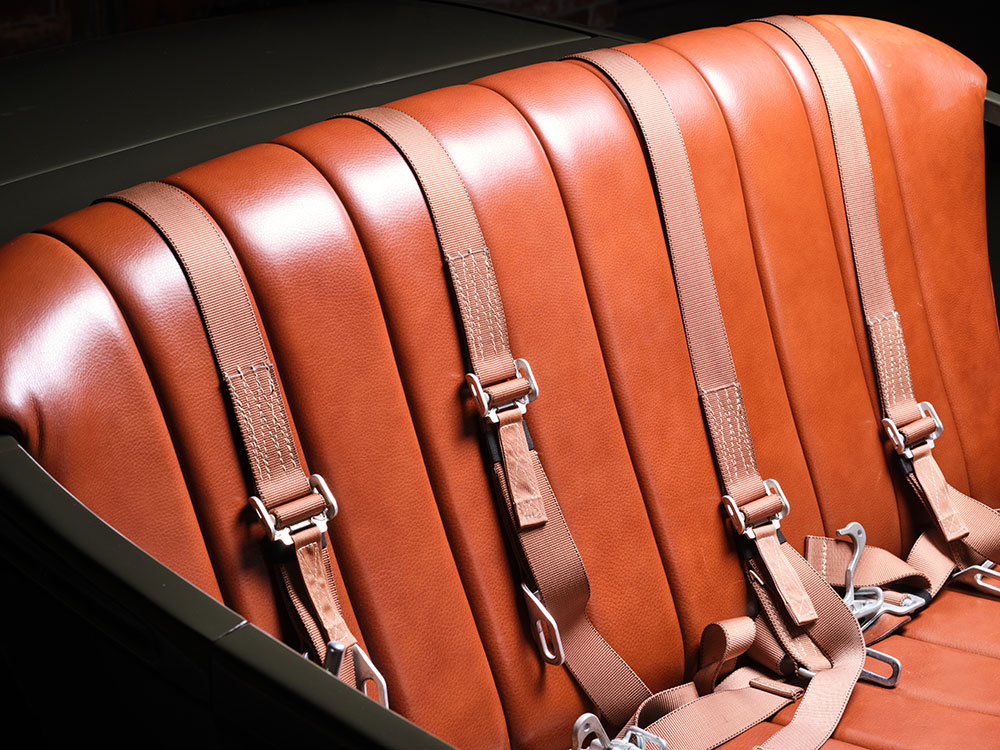 Union Speed and Style also made custom floor pans in both the passenger and trunk compartments. This was done to accept the contour of the body to the frame and to accept the rubber floor mat inserts. In the trunk this was done to provide a cover for the transverse leaf spring as it “intrudes’ ‘ and to cover the rear frame kickup. Another custom touch was the moving of the seat riser back several inches to accommodate Jon’s taller stature.

The grille shell is another interesting style point. While it started life in 1929, Union Speed and Style then went to work by first shortening the grille. From here the Model A “widow’s peak,” the crown, and radiator fill cap area were removed. The grille shell was now smooth with the opening reworked for a newly fabricated stainless grille insert and surround. This necessitated a Union Speed and Style custom-made aluminum three-piece hood. It features louvers and custom recessed “bump outs” for the Dzus fasteners, giving the roadster a lakes race car feel. 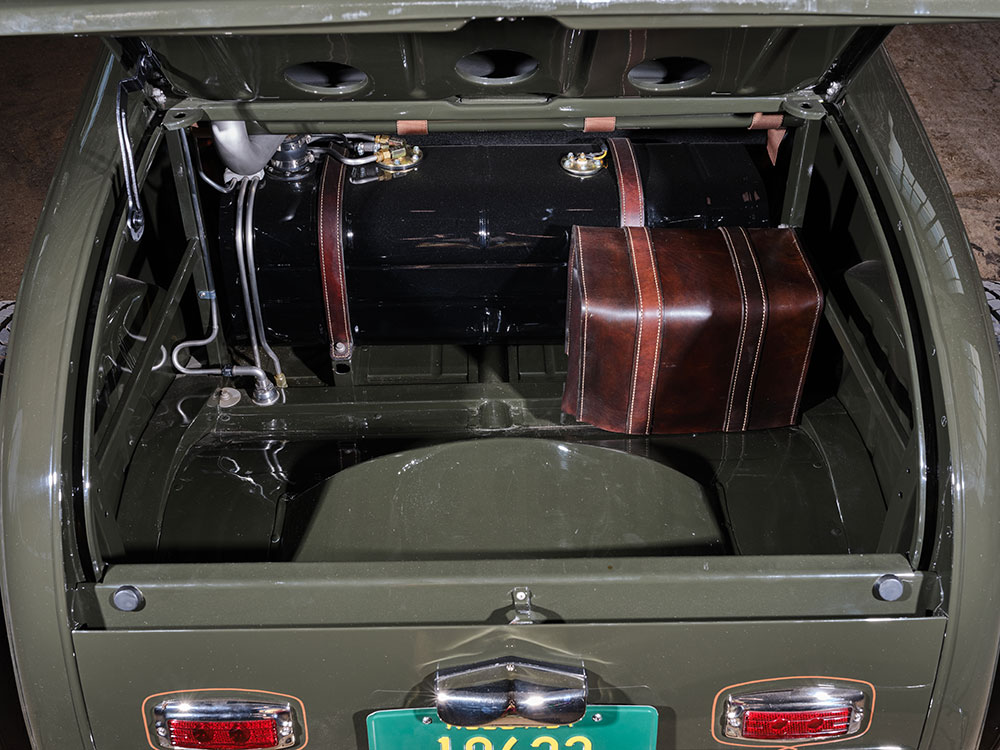 The foundation for the Dark Brewster Green (an original Model A color that came in a light and dark version) on the Brookville Roadster body was handled by Shane Hanson of Paint by Shane. From here the nifty pinstriping was applied by Jeremy Pedersen of Relic Kustoms. Lighting is a combo of stock Model A headlights (stainless buckets) with fluted lenses on a Union Speed and Style custom-made dropped bar and 1946-48 Keiser/Frasier tail lights. There’s also a custom-made “bump bar” that serves a purpose as well as an added detail with the twice pipes peeking from below. There’s an external race car–style gas filler for the trunk-housed gas tank. Both the tank and AGM battery (leather covered) are held in position with Union Speed and Style-fabricated leather straps. 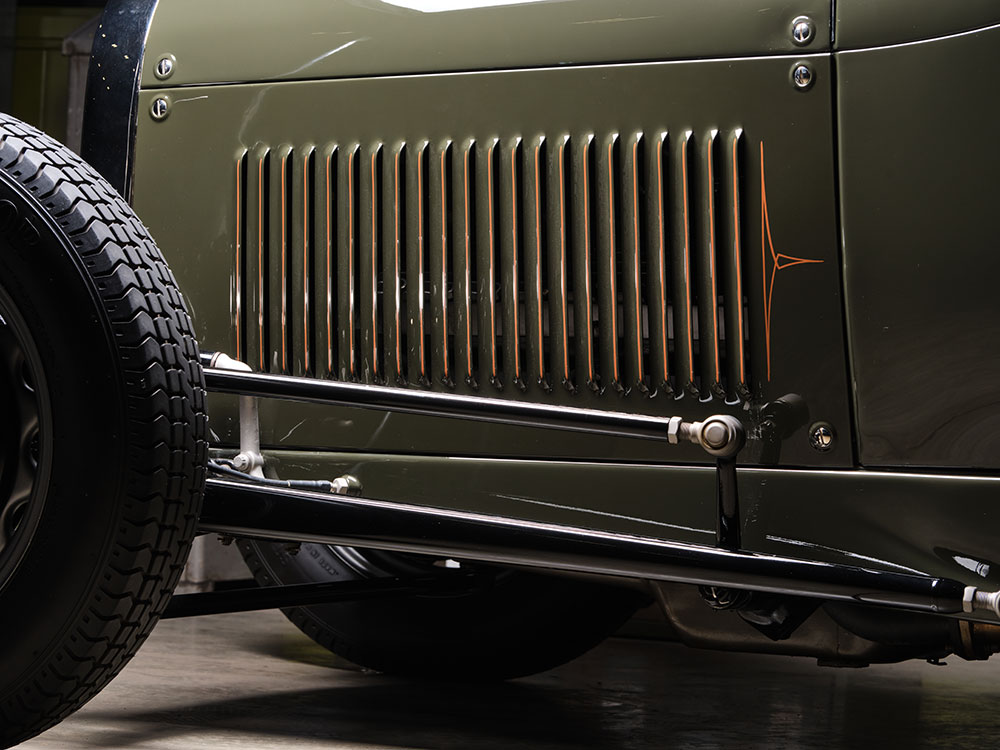 In true hot rod fashion, there’s a minimal approach to the upholstery with no door or kick panels and only rubber mat inserts used. The repositioned riser is home to a custom bench seat made and upholstered by Union Speed and Style. It’s covered in a saddle color Italian leather and uses a pair of Hooker Harness four-point belts. The dash is the traditional use of a 1932 matched to a Model A eyebrow. From here Classic Instruments’ five-pack collection of Hot Rod gauges (black face with white markings and needles) are used. The speedo is also home for the 8-grand tach. (Bet this Flathead engine won’t be seeing these limits anytime soon!) Also fitted to the dash is the headlight switch and, we like this, the choke. Don’t see this often. 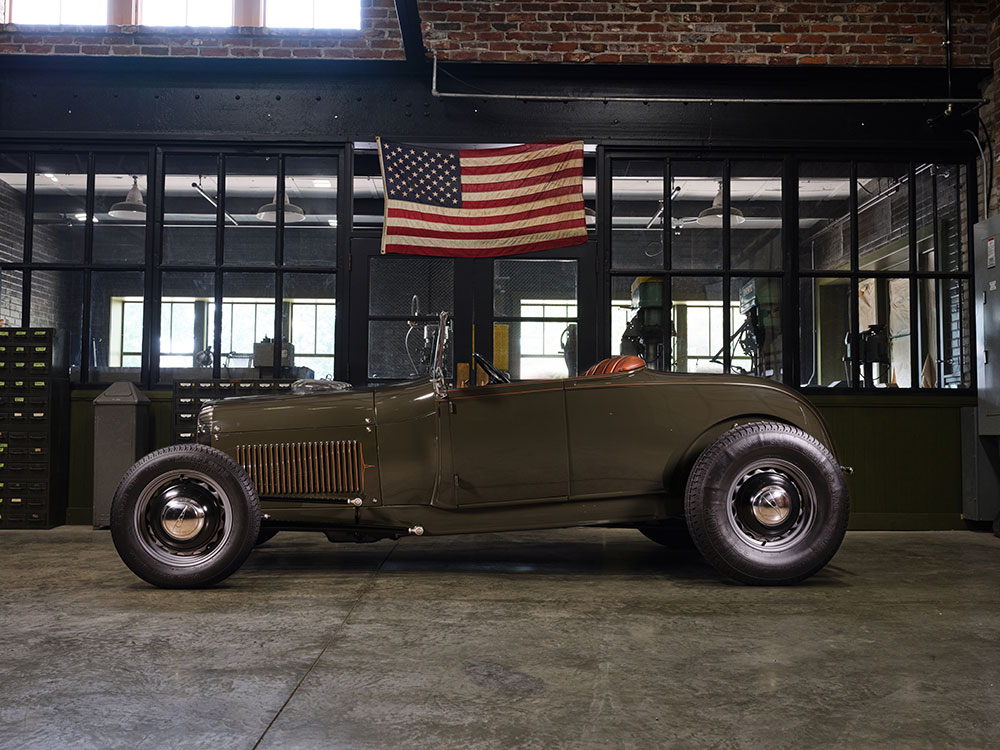 It was Dickinson who penned the quote, “Drive ’em, don’t hide ’em” that fits so well with the intention of this build and the reality. (More on Union Speed can be seen on their website: unionspeedandstyle.com.) We couldn’t agree more. There’s no doubt should you get out often there’s the chance your paths will cross. MR