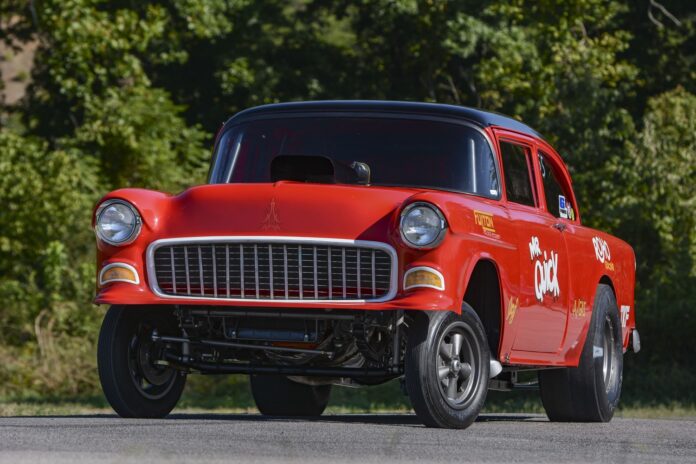 Drag racing has changed a lot since the gasser wars of the ’60s. The basic principles are still the same, but the manner in which they’re accomplished is wildly different. This is the case at the majority of dragstrips across the country, where modern marvels impress the masses with seemingly effortless quarter-mile passes. 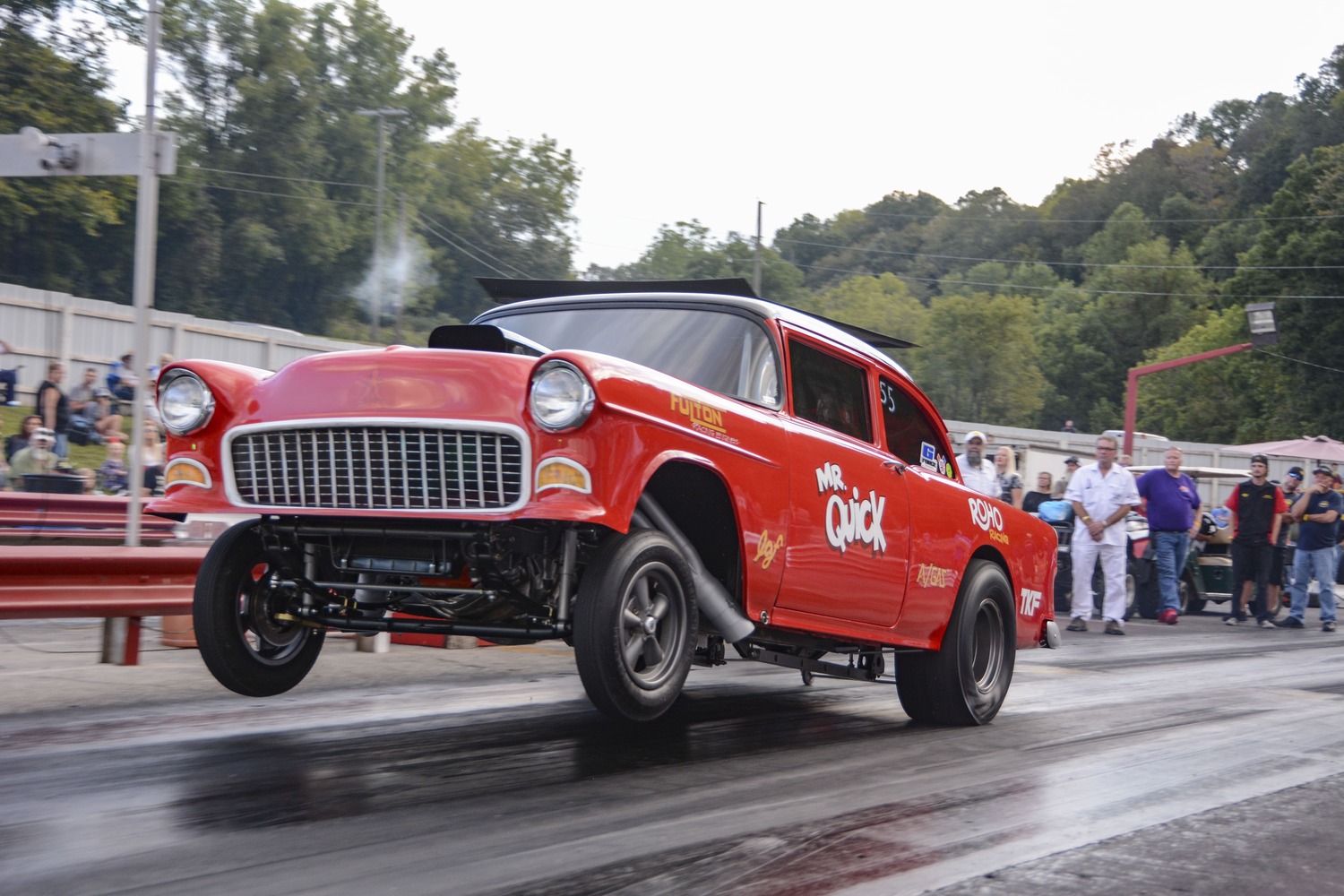 Meanwhile, Terry Housley, a 45-year drag racing veteran from Lenoir City, Tennessee, took a few steps back from the modern approach of drag racing, having spent a couple decades behind the wheel of various drag cars. Terry strapped himself into a car that requires max effort and commands the attention of everyone in the stands when he pulls to the line. This ’55 Chevrolet is purpose-built to replicate a car that would’ve competed in NHRA’s Gas Coupe and Sedan class during the mid-to-late ’60s. Terry and his son, Blake, built this car to compete in the Southeast Gassers Association, which is a group of dedicated racers who believe in paying tribute to the pioneers of the sport.

Terry paid close attention to the Southeast Gassers Association, especially when they visited his home track: Knoxville Dragstrip in Maynardville, Tennessee. It sent him back in time when his brother, John, campaigned a ’69 Camaro that dominated the local tracks in the Modified Production class. Although the car was known as the “Super Hugger,” it had the name “ROHO” lettered on the quarter-panel. Terry got his start in drag racing a little after the Super Hugger was retired, but the ROHO name stuck around and found its way onto several of his race cars through the years. Terry worked his way up the ranks from Quick Rod to Top Sportsman to Pro Modified and even a short stint behind the wheel of a Pro Stock car. 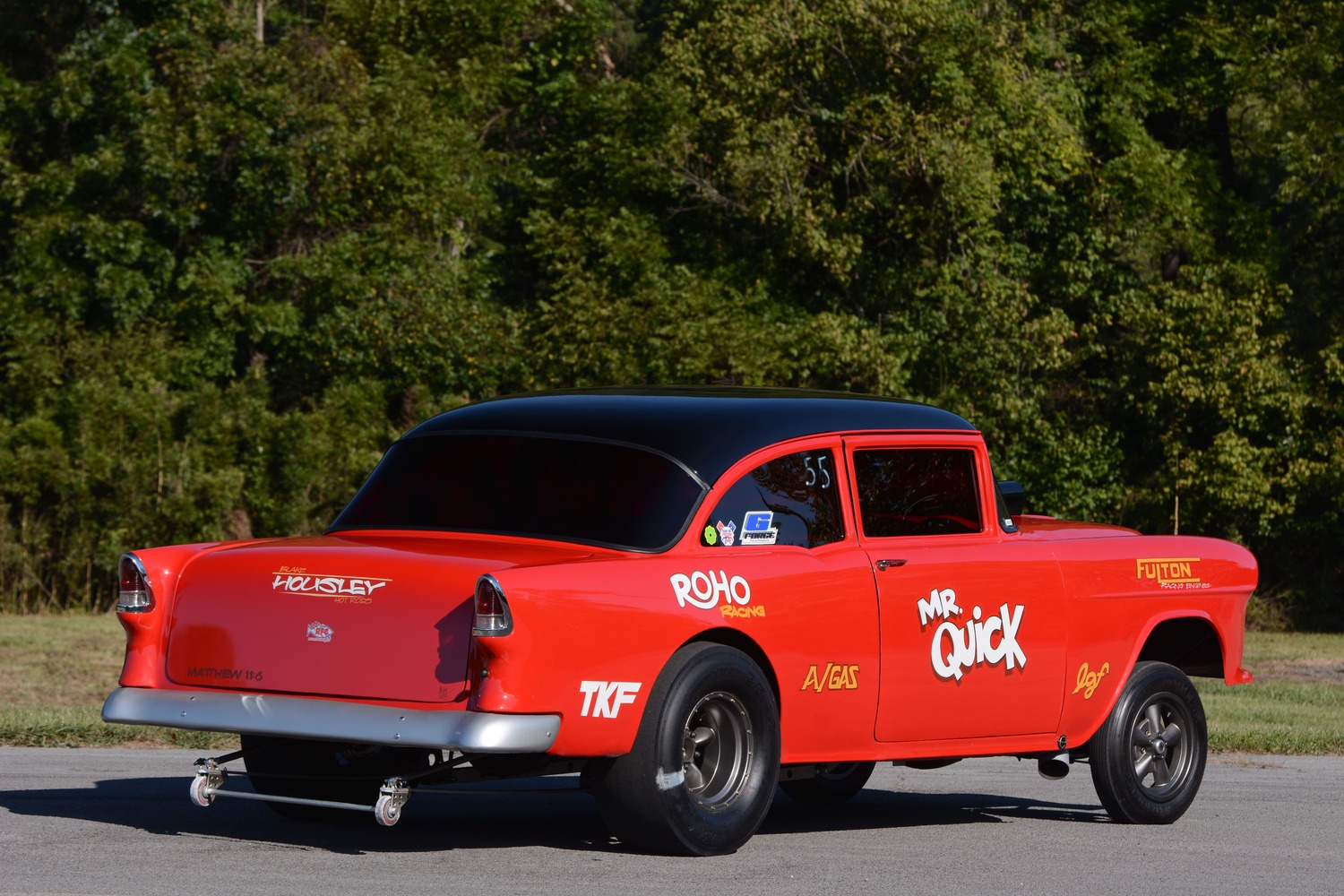 The fast-paced world of drag racing evolved quickly during the ’80s and ’90s and Terry was along for the ride, thrashing just to get from one race to another. But when the idea came about to build this old-school gasser, he was ready to slow down and take a methodical approach to building this car. Blake is a fabricator by trade but concentrates mostly on modern drag cars. While this gasser may seem simplistic by comparison, the process of building a competitive car in the A/Gas ranks of the Southeast Gassers Association is no walk in the park.

After finding a suitable body in Alabama, the father and son duo set out to build the quickest and fastest car possible and sought the help of Fulton Racing Engines to bring that idea to fruition. Terry considers Gene Fulton a close friend and an inspiration, and he says this project brought them even closer together. A GM Bowtie block provided the starting point for the build and resulted in a final displacement of 477 ci. The Brodix cylinder heads have the Gene Fulton treatment, breathing through a set of 2.350- and 1.880-inch valves. Up top is a “Bread Box” tunnel ram with lots of custom internal tricks, topped with a pair of Holley 6109 carburetors, which Terry bought way back in 1983. A steady flow of C12 racing gas is ignited with an MSD ignition system and sweet fumes flow through the custom fenderwell headers, fabricated by Blake. Blake is also responsible for fabricating the chromoly rollcage, custom ladder bar rear suspension and many other chassis components underneath the car. 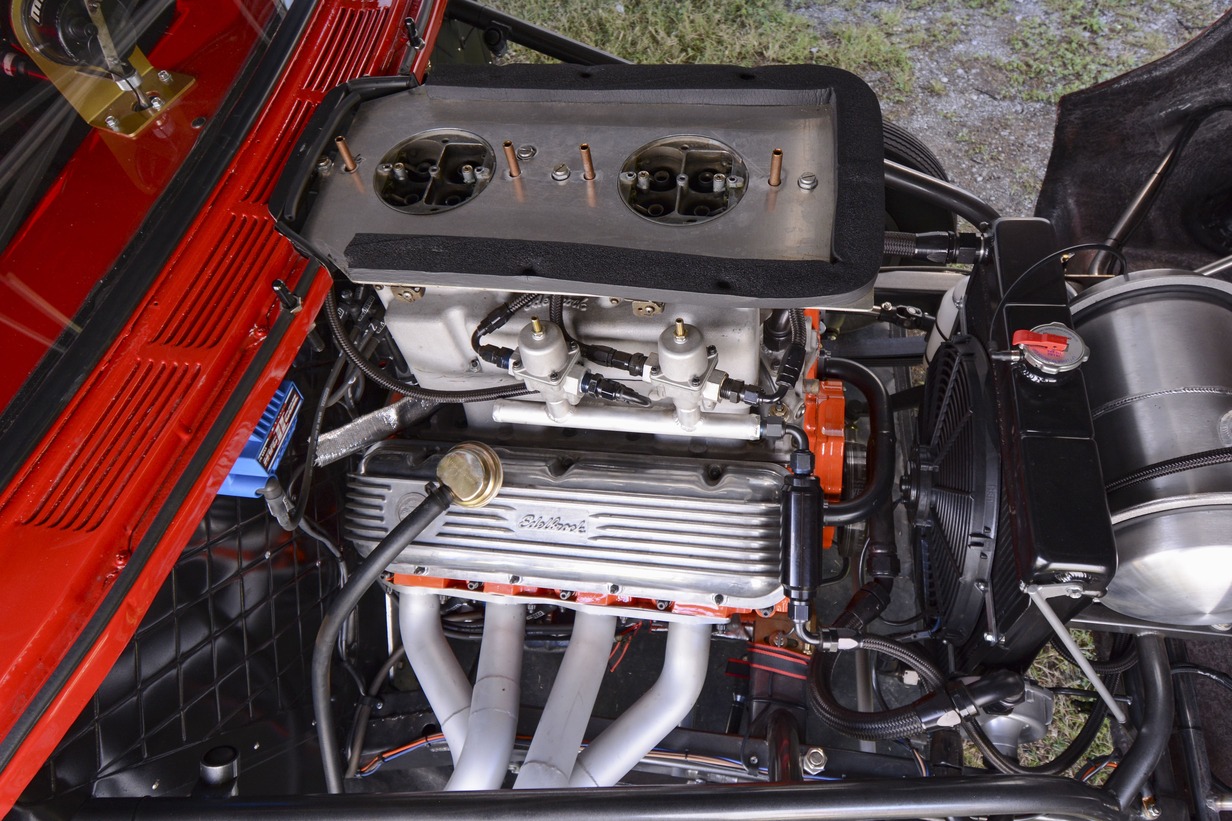 Since the Southeast Gasser Association rules require a clutch-assisted, manual transmission, Terry went with a G-Force 101, a four-speed unit equipped with a custom clutch that he built from one of his old Pro Mod clutch setups. A line lock is allowed to prevent the car from rolling through the beams, but there is no rev limiter, two-step, or shift light to assist him. It’s all man and machine, and it’s a beautiful thing to watch and hear, as Terry’s eyes, hands, and feet perform a delicate dance to maintain control.

Aesthetically, the ’55 Chevy looks like it came straight out of the ’60s. The stance, the red lexan windows, the fabricated hood scoop—it all fits the era of the build. The fiberglass front end and doors bring the car’s weight down to 2,800 pounds, including the driver. Trenton Clark is responsible for the slick paint, while Ron Fleenor painted the beautiful hand lettering. While appearance is a very important part of the Southeast Gassers Association, driver safety is also a priority, so the rules allow for modern disc brakes and of course modern slicks. Terry chose a set of Wilwood discs for all four corners, and then used a set of authentic magnesium American Racing Torq Thrust wheels from the ’60s, wrapping them in Moroso front runners and Mickey Thompson slicks. 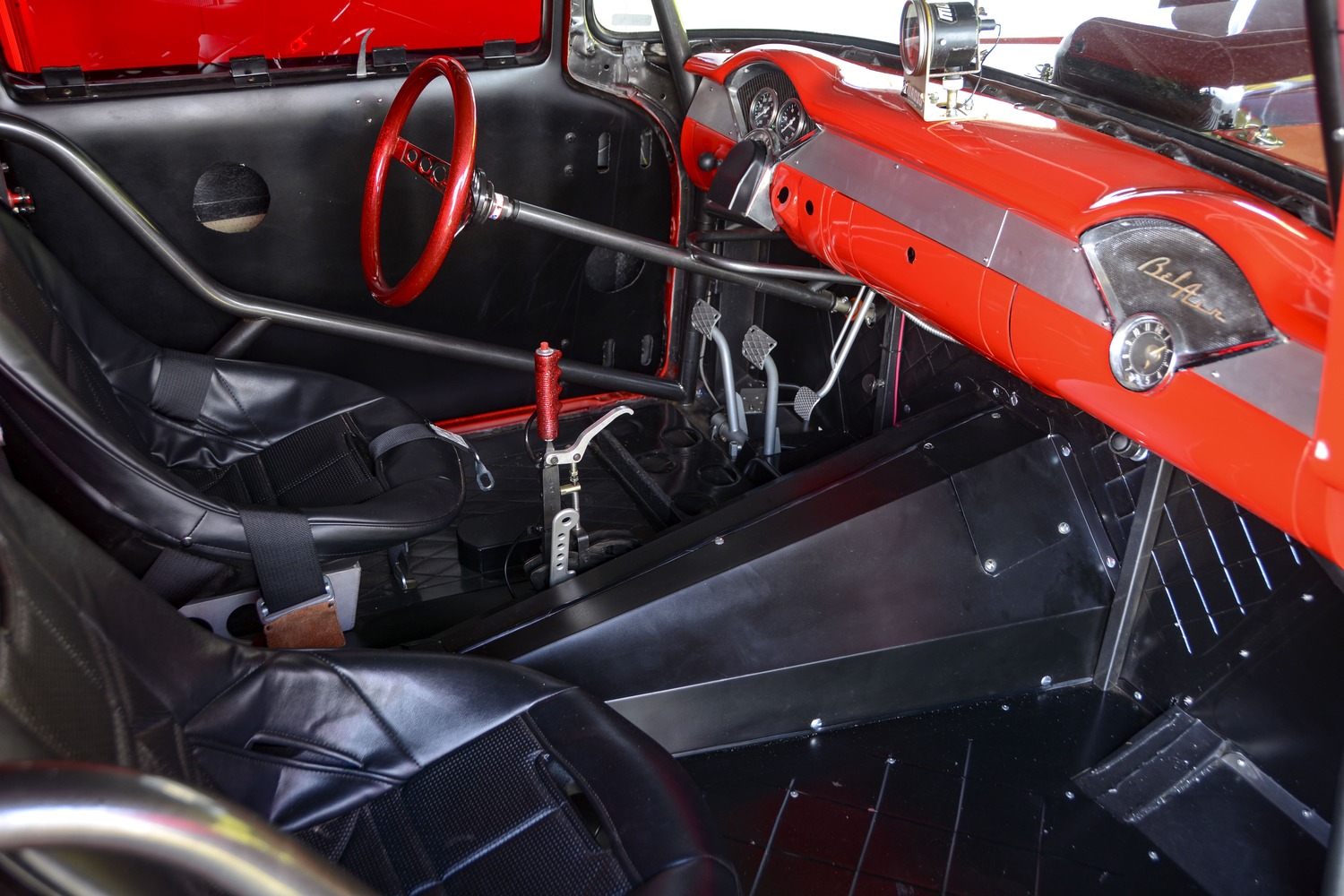 Terry and Blake debuted the car in the fall of 2020 and slowly tweaked the combination at select Southeast Gassers Association events in 2021. Even though they didn’t make it to every race during the season, they finished off the year with a bang at Shadyside Dragway in Shelby, North Carolina. On a cool, fall day, they reset the A/Gas eighth-mile record—a tall order for such a fresh car. Traction issues kept them from making it deeper into eliminations, but ROHO Racing certainly got the attention of fellow racers with that record-breaking blast. 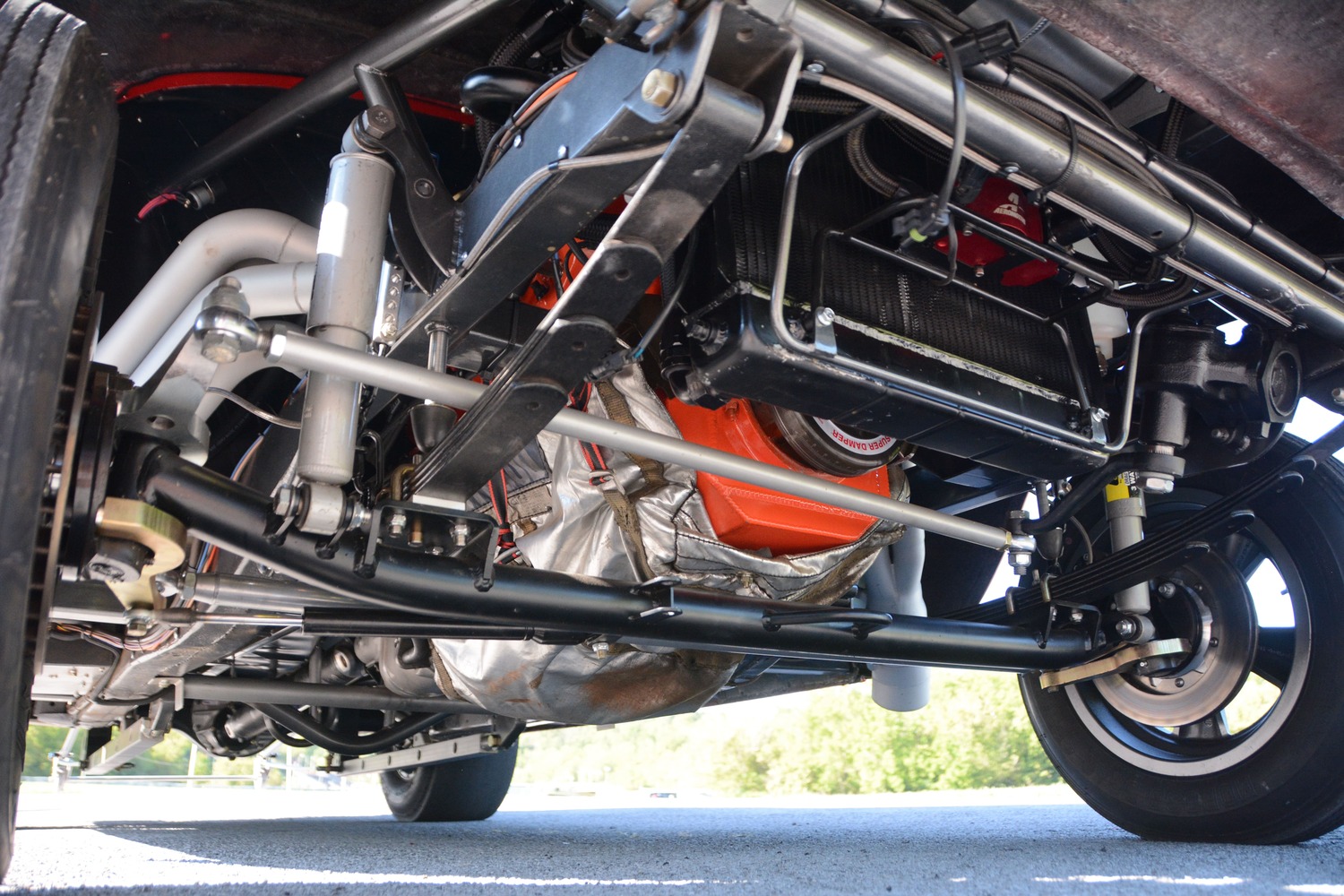 The Southeast Gassers Association doesn’t publish elapsed times, keeping the racers and spectators guessing. It’s a magical formula that puts the focus back on the cars, as they provide plenty of “wow” factor, even without displaying the times. Wheels-up launches, big-time rpm, and door-to-door heads-up action is enough to keep the attention of spectators, who flock to tracks when they hear the Southeast Gassers Association is coming to town. Terry Housley is proud to be a part of the group, and this drag racing veteran admits his ’55 Chevy takes him back to his earliest days of drag racing, before technology came into play. Simply making it A to B under full throttle is a victory in itself, but we’d be willing to bet this car will find its way to victory lane in the very near future.