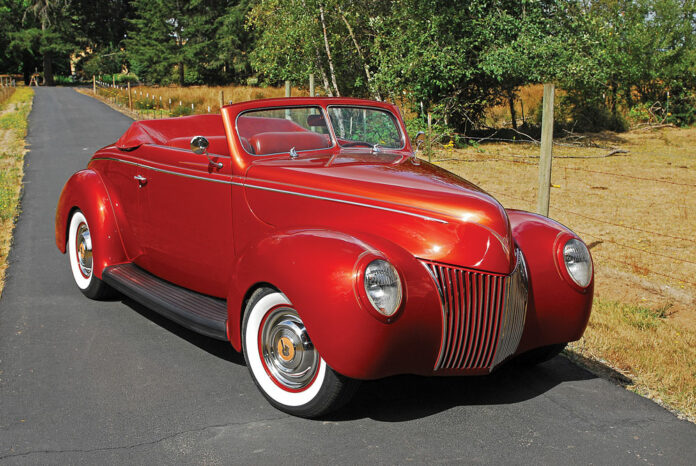 By Dale Moreau – Photography By the Author

Have you ever bought a car that really looked good only to find out later that it hid a multitude of sins?  In 1992 Marv Shetler did just that with a rare 1939 Ford Deluxe convertible coupe. Now, after decades of use and abuse, a recent hot rod restoration has resulted in this beautiful build. It may look like an original classic, but underneath the Candy Orange is a supercharged Ford Flathead and C3 Corvette IRS. 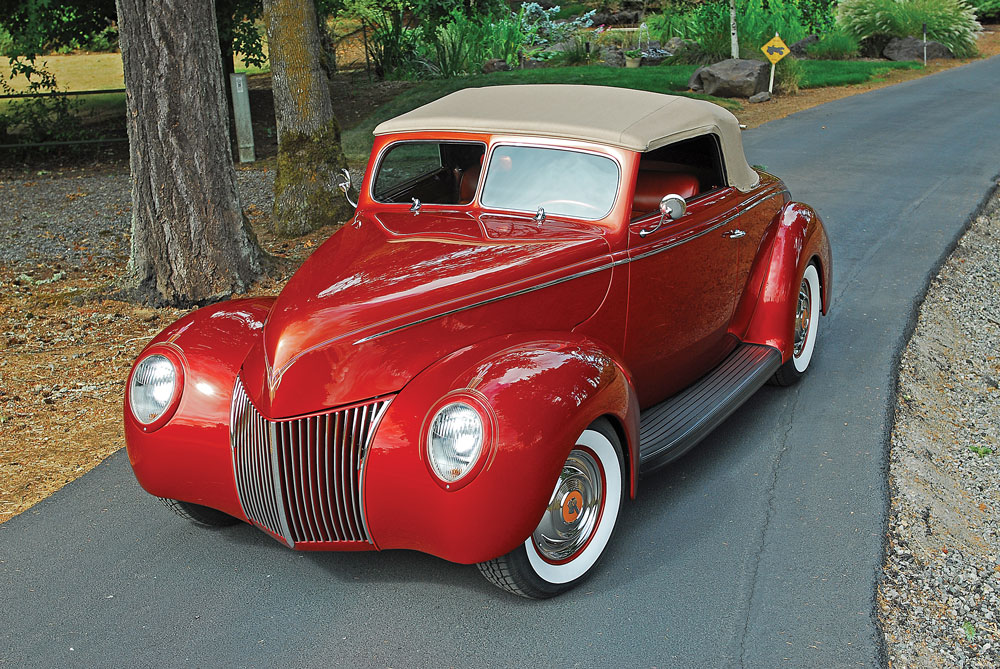 Marv originally picked this rare 1939 Ford Deluxe as a decent driver, an older build with the usual Chevy drivetrain and a Corvette rearend. For the next 14 years the Shetler family traveled in the car, making the speedo spin to over 25,000 miles.

Needless to say, the poor old hot rod was getting a little long in the tooth and needed some serious help. Taking the car to Bowers Race & Rod Shop right there in Aumsville, Oregon, was the obvious step to do a few updates. Upon closer inspection, the truth came out that the bodywork done before was sad indeed. Rotted doors poorly repaired and bad welds abounded throughout the old ragtop body. Ford Deluxe convertibles were not always treated well and the later work to build it as a street rod was marginal, at best. 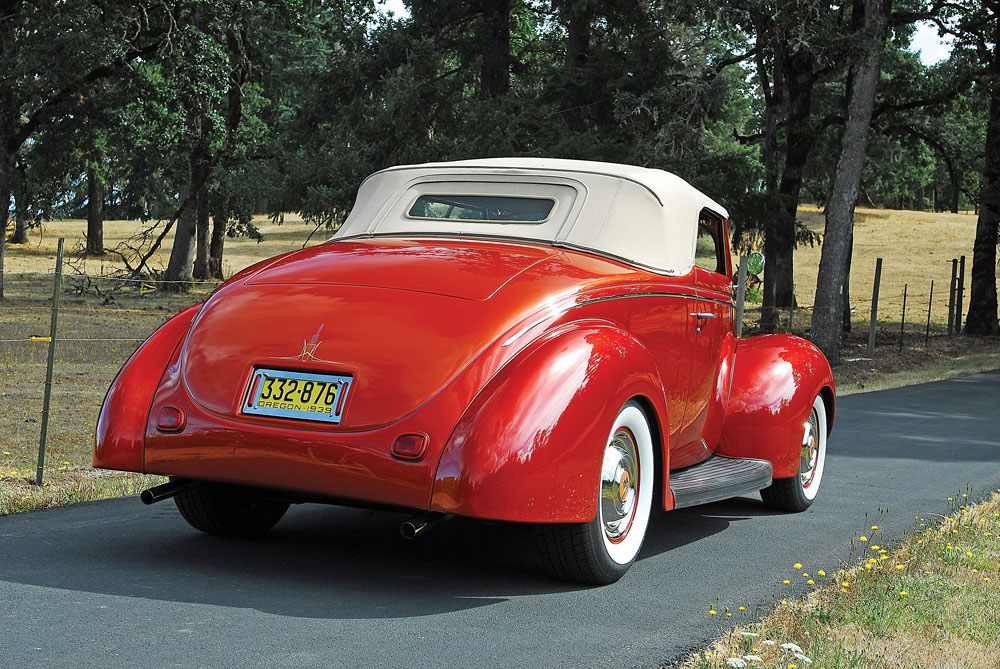 You know what happened next, a few repairs turned onto a full-blown rebuild. The grill was reshaped, the hood pie cut in the front, trim removed, and the latch redone to release from the inside. On the body the door hinges disappeared and “bear claw” latches took over from the originals. A recessed gas filler was made with an inside release, along with a new license plate inset in the deck with a custom frame. The rear wheelwells were widened just a bit, the bumpers tossed, and the body holes filled. Interesting you see 1939 Ford taillights on all kinds of other years of cars but this 1939 Ford has 1941 Hudson taillights molded into the fenders. 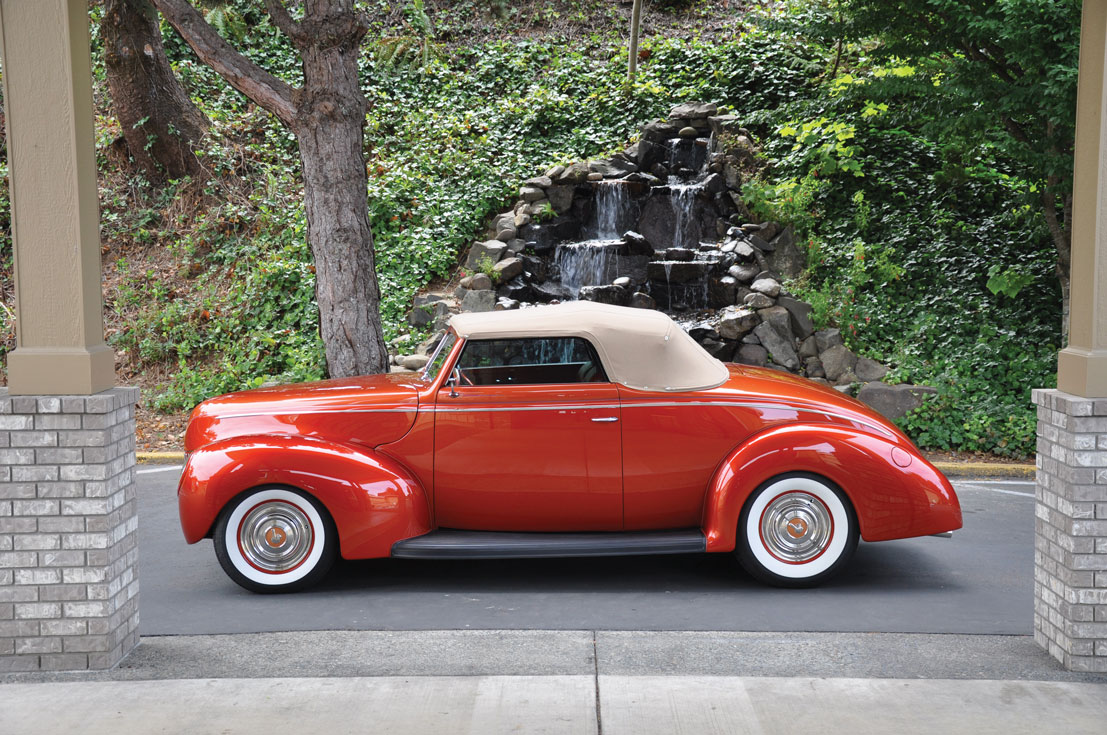 With all the rough bodywork done, two-tone Tangerine and Candy Orange paint was laid on the now-perfect body. A two-tone leather interior to match and the chopped top in Mercedes cloth by Karen Iparraquirre of Airsflare Upholstery of Independence, Oregon, set the tone.

Using a 1940 Ford dash with Classic Instruments and an ididit column wired with an American Autowire kit put the fire to the project. With a 1952 Pontiac steering wheel and hot rod heat and air, the car came alive. 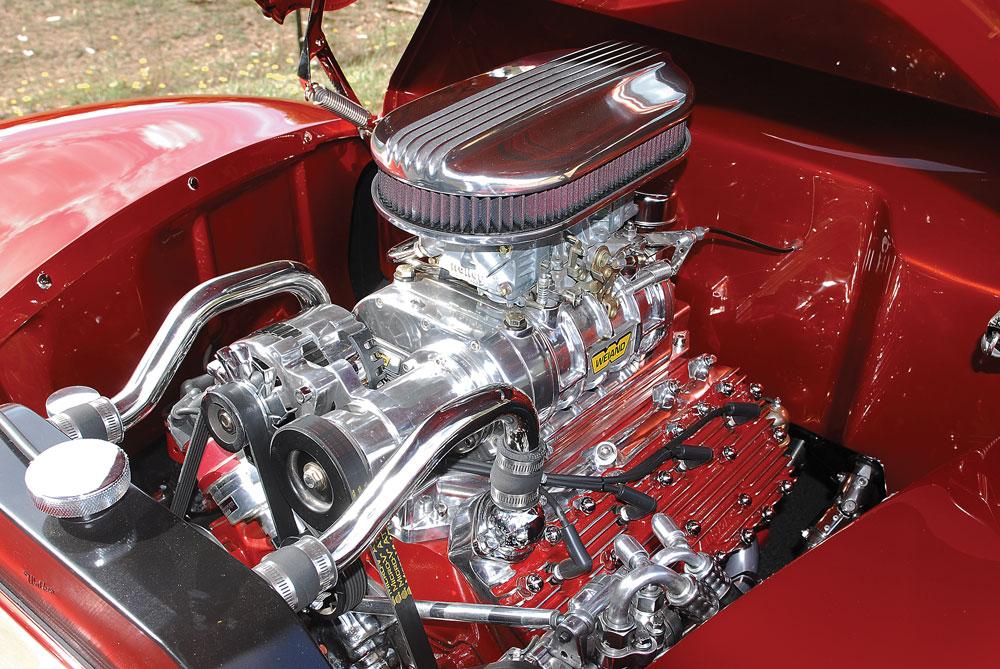 Check Out: A Street Rod That Does What Others Can’t

Now for the good stuff. Mike Reeves of Mount Vernon, Washington, built the Weiand-blown N.O.S. French 276 ci 300 hp Ford Flathead. It is backed by a Borg Warner T5 transmission with a hydraulic clutch release. Up front a Heidts IFS with stainless steel A-arms and QA1 coilovers with larger disc brakes replaced the original Mustang II along with rack-and-pinion steering. The C3 Corvette rear suspension received all-new parts with a change in ratio to 3:70 to match with the overdrive five-speed. The now-completed package rolls on Chevy Rallye wheels, Coker wide whites, and 1951 Pontiac hubcaps. 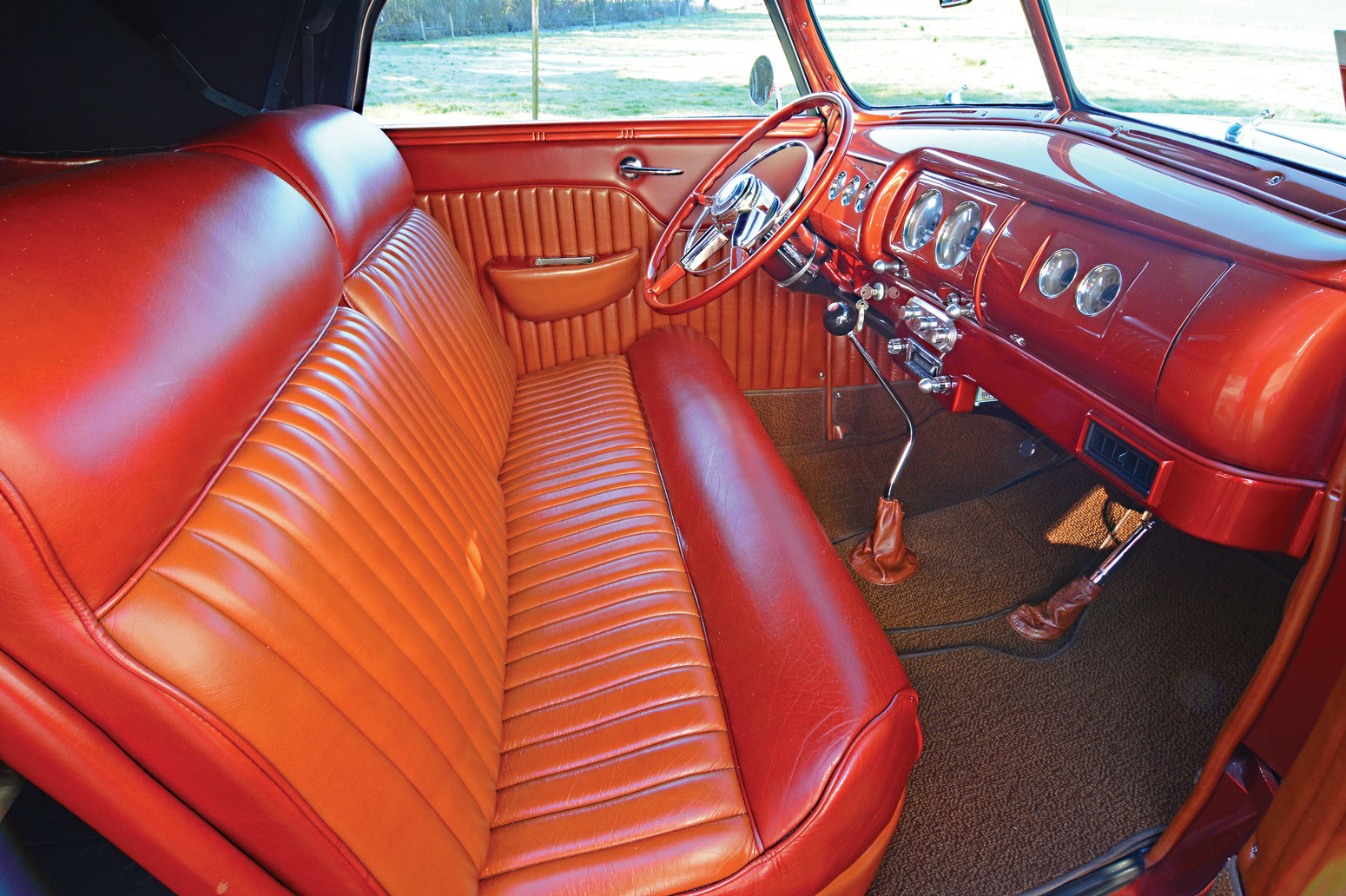 Marv has a long history with cool old cars, but his latest sure is the cream of the crop. By the way, this is no trailer queen, just as they drove it before, the Shetlers have put a ton of miles again on this beautiful ragtop with many more to look forward to. MR