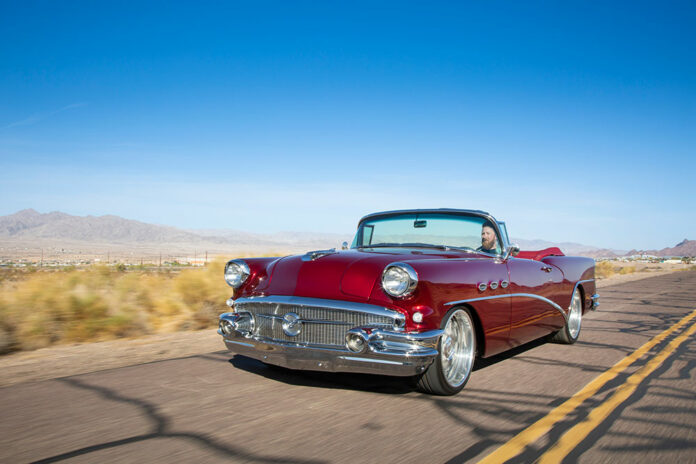 Behind every influential fabrication shop is a support system that helped make a dream, the ’56 Buick convertible you see before you, turn into a reality. Now, that dream is as different and unique as each individual business, but in the case of Ross Logsdon of Premier Street Rod, of Lake Havasu, Arizona, he was looking to turn his passion of tinkering in the back of his parents’ parts shop into a full-blown automotive revolution. 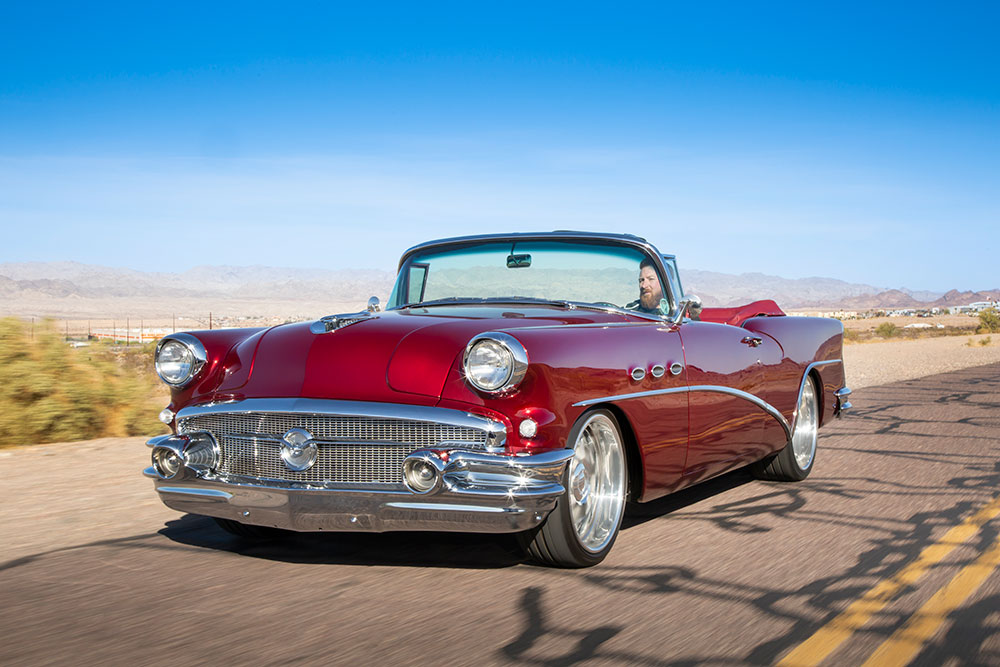 If you pay any attention to customized classic cars at all, then you’ve most likely run into the Premier name a time or two. While Ross’ folks, Rob and Kerry Logsdon, laid the foundation for their son’s passion by opening a retail service most notable for offering GM-licensed vintage Chevy truck bodies, it was ultimately two friends of the family who proved to be the real catalyst in Ross’ fast track to the limelight. 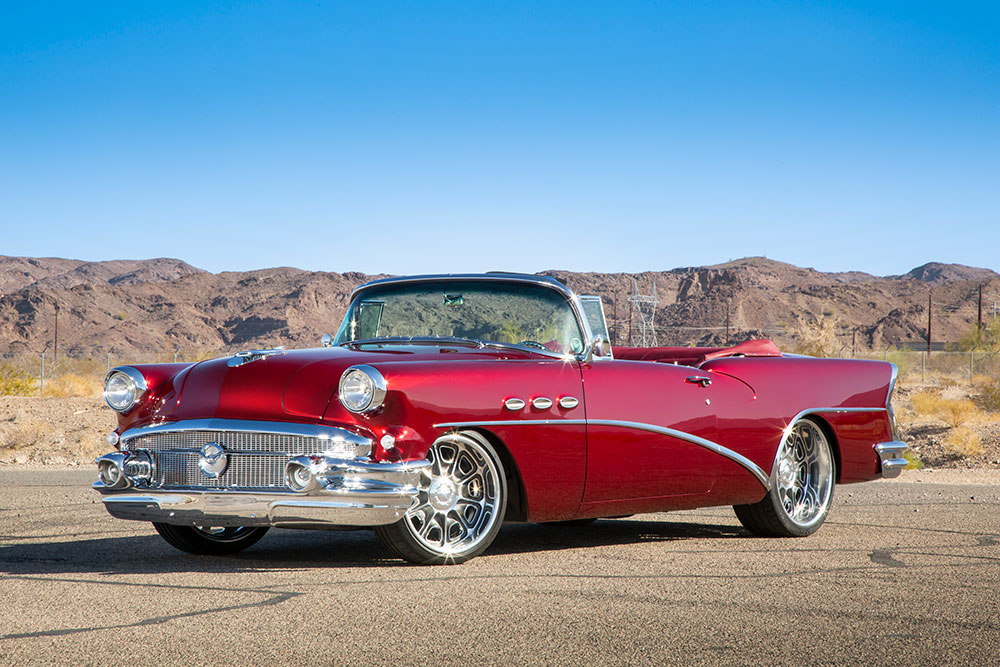 George and India Sepulveda were known for their collection of customized Harley-Davidson motorcycles as well as other top-shelf, one-off vehicles. The one type of vehicle they didn’t have in their impressive stable, however, was a heavily fabricated classic pickup truck. Well, it just so happened that trucks are Ross’ specialty. The Sepulvedas and Logsdons collaborated on a groundbreaking ’57 Chevy Truck build affectionately known as “Snow White” that set the custom truck world aflame after its unveiling at the 2017 SEMA show. 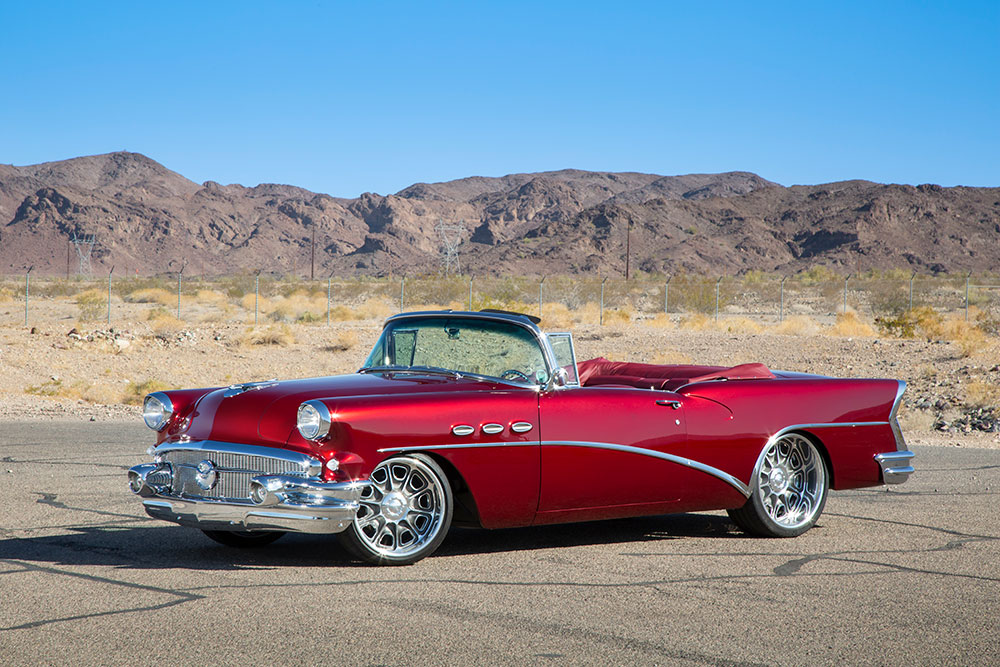 While Snow White was the biggest pickup success story at that time, it was the last personal project George saw all the way through, due to his untimely death in July 2018. To celebrate her husband’s passion, India reached out to Ross to inquire about building another one of George’s own vehicles, his ’56 Buick Special convertible, to make her own. She felt that being able to cruise around with her grandkids in a car that George would’ve been excited to see built next was the perfect way of memorializing his most beloved pastime. 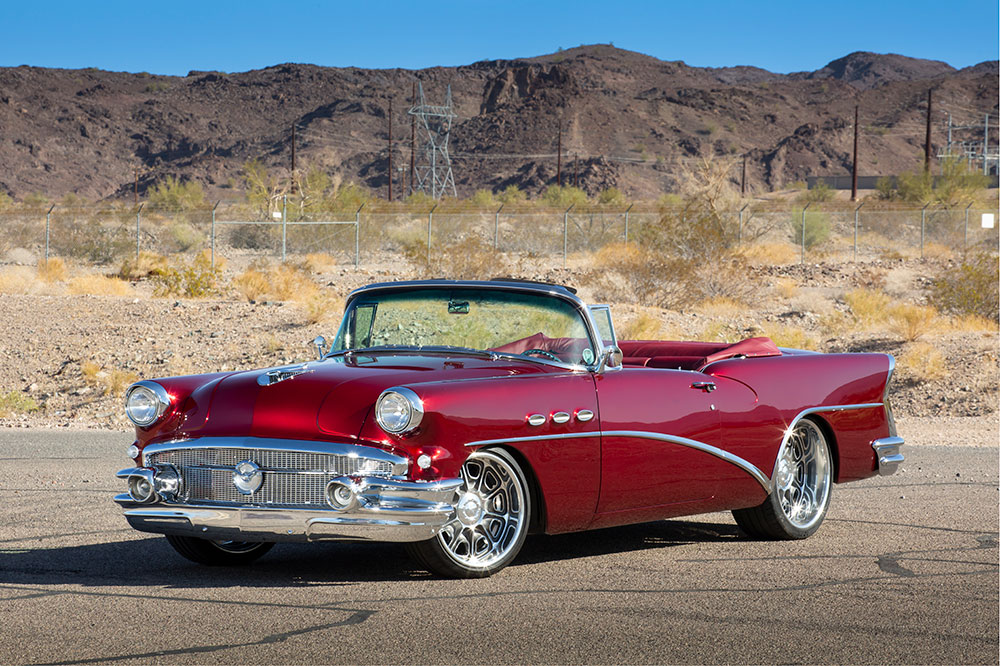 Of course Ross was quick to commit his undivided time and attention to India’s proposal of the Buick Special. “The car came to us as a shell, individual pieces and boxes filled with parts,” Ross says about the project’s humble beginnings. “We had to do a lot of research on this car, as Buick parts aren’t so easy to find, but India was great at offering to scour eBay and online forums to help track down the parts we needed.” 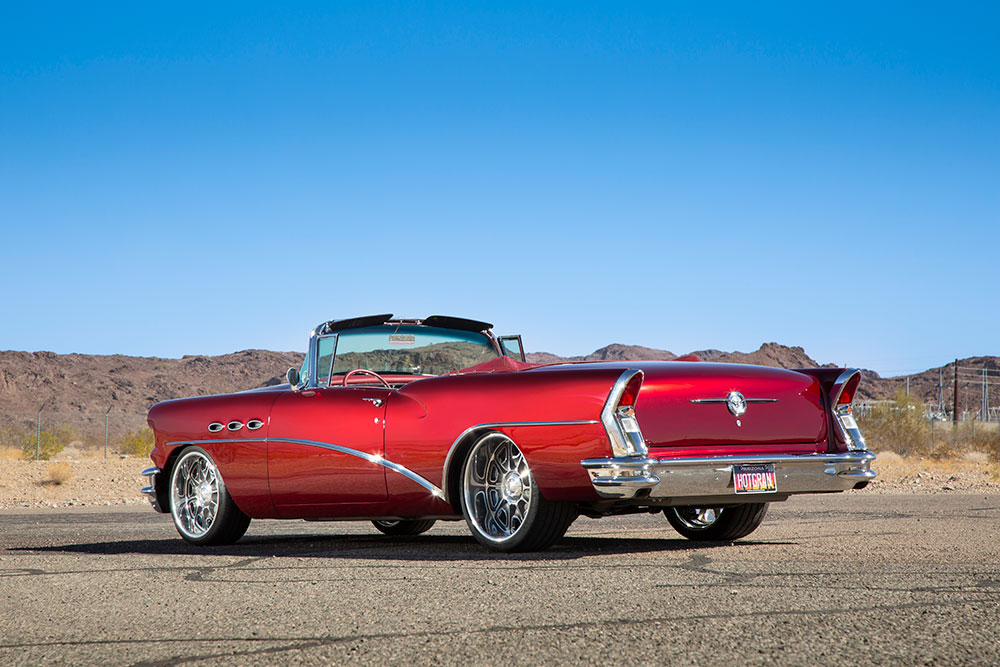 Making this Buick an absolute blast to cruise is a brand-new LS3 crate engine from Gandrud Chevrolet that was combined with an automatic Chevy 4L75E transmission. The new power unit was upgraded with a Billet Specialties Tru Trac serpentine system and is kept cool with a PRC radiator with electric fan. Spent gasses flow out through a set of Gibson headers and a 3-inch custom exhaust that is complete with Vibrant Performance clamps, DEI heat wrap, and Borla mufflers. 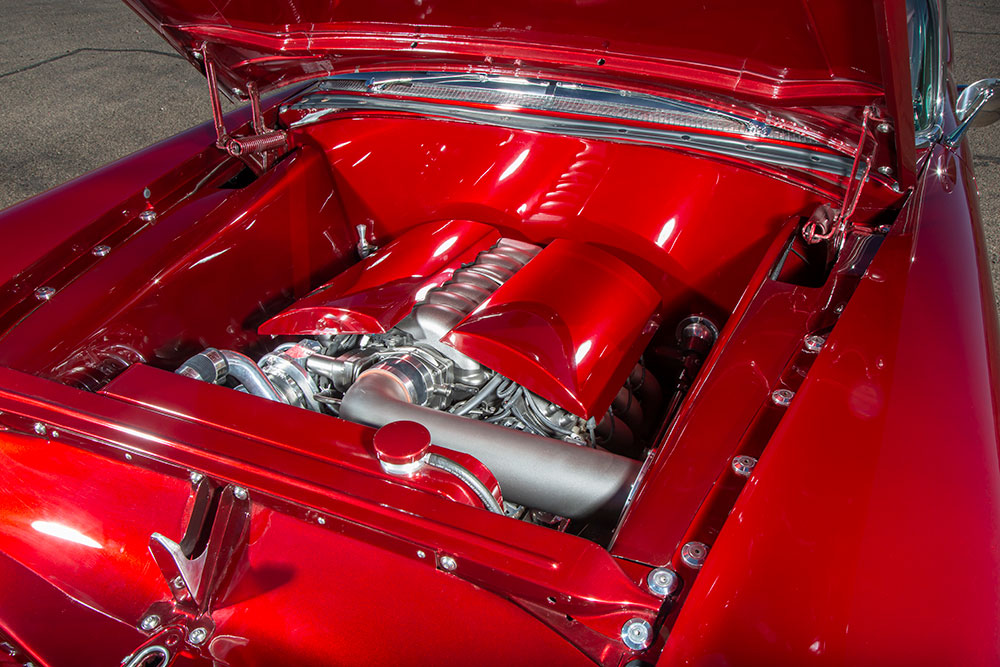 The car was quickly taking shape due to the winning team dynamic India and Ross had going from the start. Although she was happy to be as involved as possible with the buildup of her husband’s Buick, an unfortunate wave of bad luck brought the project to an abrupt standstill. India had been struggling with a tough battle against cancer until she ultimately lost her fight in May 2020. The build was briefly put on hold while the family got a few affairs in order before George and India’s sons reported back to Ross to pick back up where he left off. The Sepulveda boys planned to see their parents’ last custom hot rod through, and to look at it as a living memorial to them. 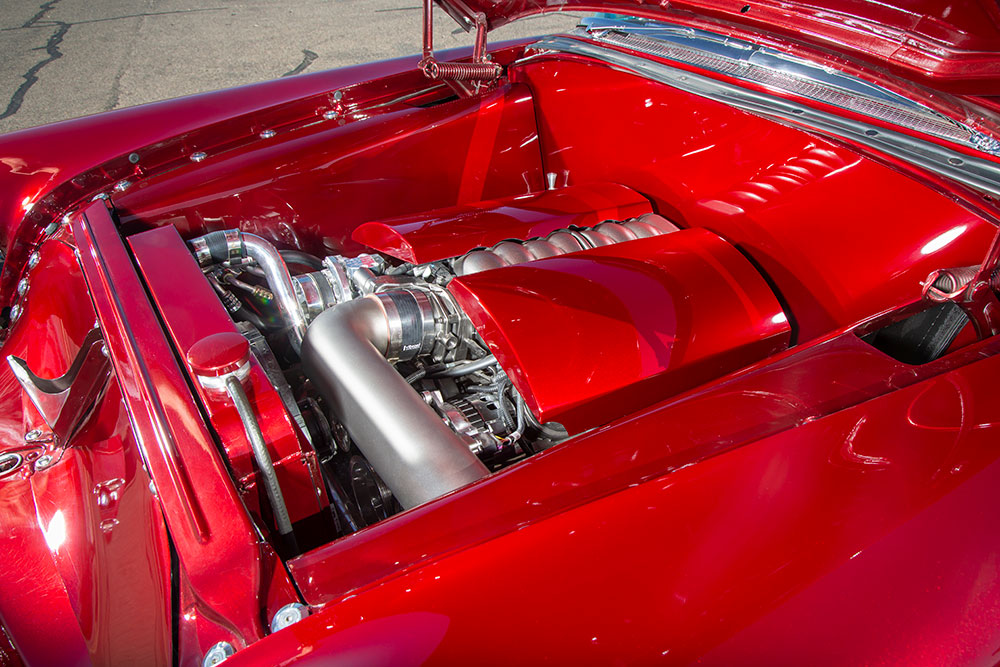 “Of course, we were deeply saddened to hear the news about India,” Ross admits. “We knew how much the project meant to her, and luckily we had gone over the entire project with her at the beginning, so we were aware of just what she wanted done to the car.” India already got the aftermarket chassis and wheels she wanted, and had been looking forward to seeing the Buick painted a beautiful rich red wine color with an interior to match. “We began referring to this car as the Buick ‘Special,’ and with the help of her boys, we came up with the official name ‘Reminisce’ for India’s car,” Ross adds. “The name is perfect because when the people special to her see this car they will definitely remember India’s beautiful, classy style.” 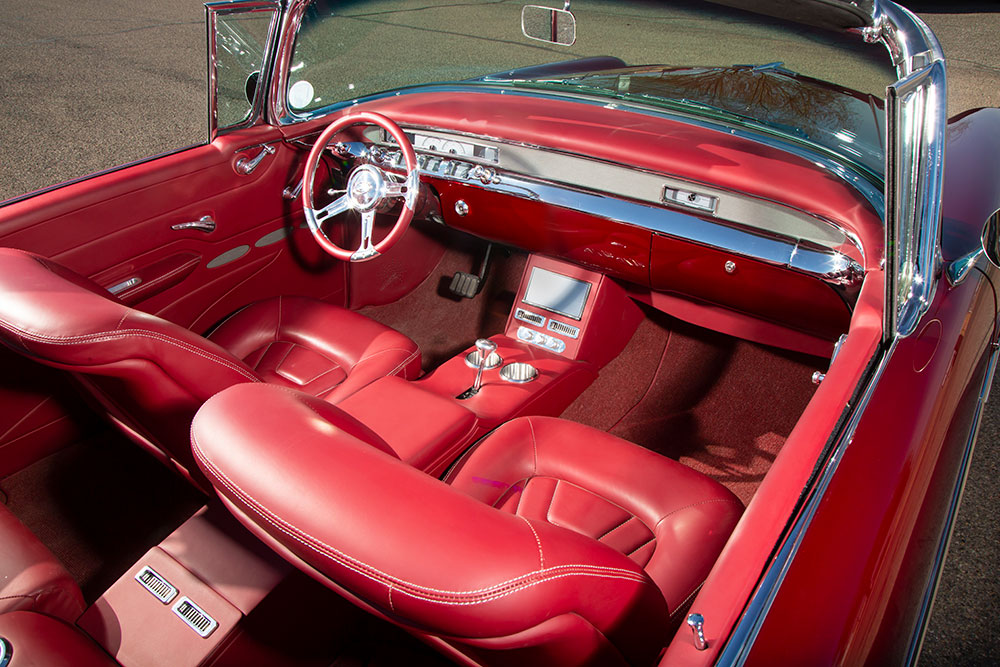 Jason Deering of Premier Street Rod whipped the Buick’s 66-year-old body back into shape and tucked and brought the bumpers closer to the car for a streamlined appearance. Getting the right color, India talked to Randy at Painthouse Customs to get the right shade of red paint. Once the car was ready for color, Deering loaded up his paint gun with a custom play on PPG’s Randy Apple II hue. Once the paint was cured, it was cut and buffed with Wizards Products for the ultimate shine. 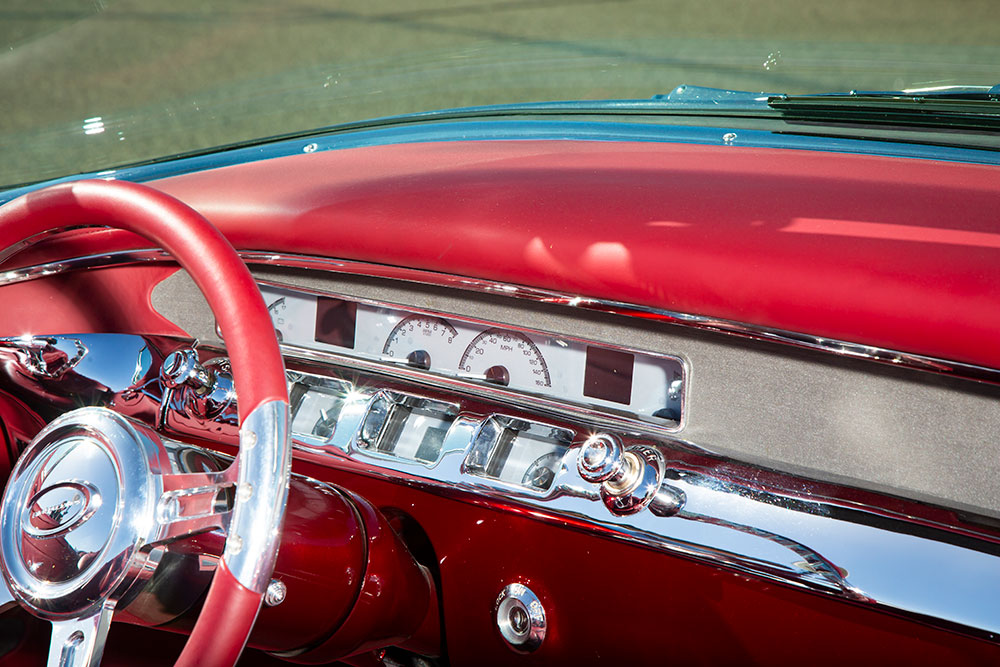 The bumpers were also modified and tucked in before getting sent out with other parts to The Polishing Shop for fresh replating. With new headlights from United Pacific Industries, door handles from Billet Specialties, and a new windshield and windows installed with Steele Rubber Products seals at Lucky’s Auto Glass, India’s Buick was looking as slick as she had envisioned. 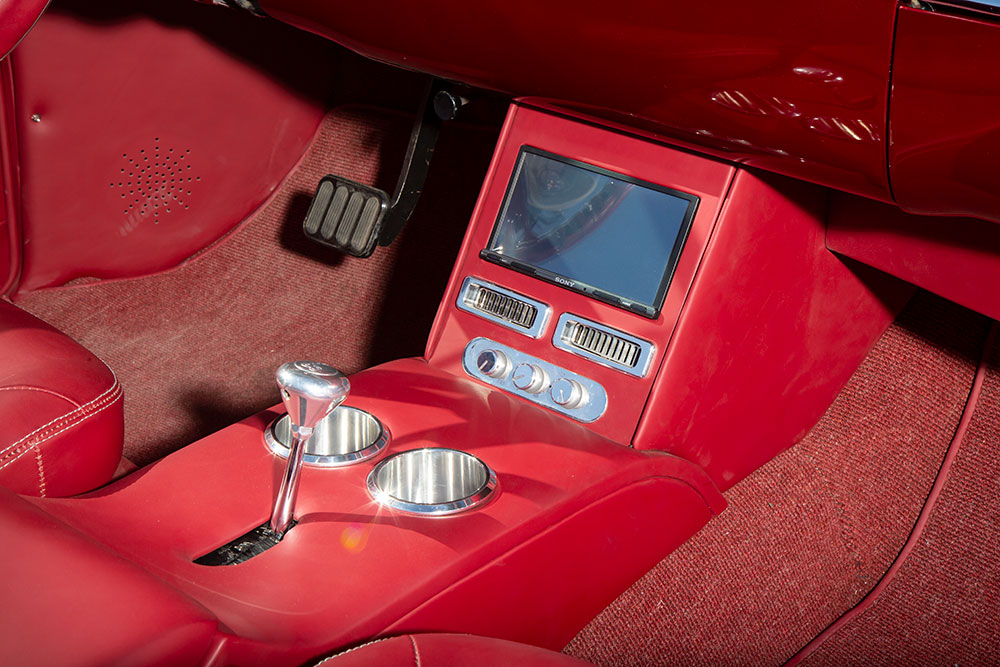 The interior was next up for transformation as Ron Mangus Interiors and Tim Auto Upholstery both contributed heavily to the restyling of the Buick’s cabin. The Glide Engineering seating was wrapped in color-matching leather from R Best Leather and Mercedes tweed carpeting was laid down. Up front is the one-off Dakota Digital HDX gauges, which use the original Buick shell. Below it, the Vintage Air vents and control panel aid in keeping the car cool in the summer and the billet gear from Lokar dresses up the pedals. 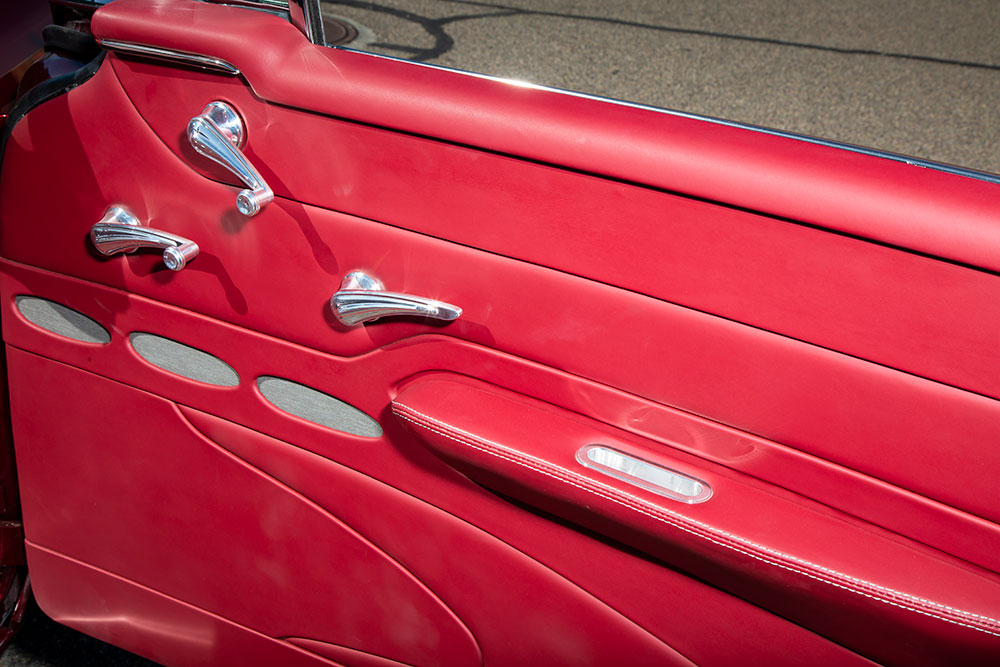 In January 2022, Reminisce was invited to enter the Barrett-Jackson Cup and unveiled at the auction in Scottsdale, Arizona. “It has been our great honor and loving dedication to have completed this special build for a great family and cherished friends who are greatly missed every day,” Ross says of the final leg of completing George and India Sepulveda’s ’56 Buick. “Once Premier buttons up the final details on the car, the keys will be handed over to the three Sepulveda sons so they can enjoy the car with their families and create many great memories in the years to come.” MR