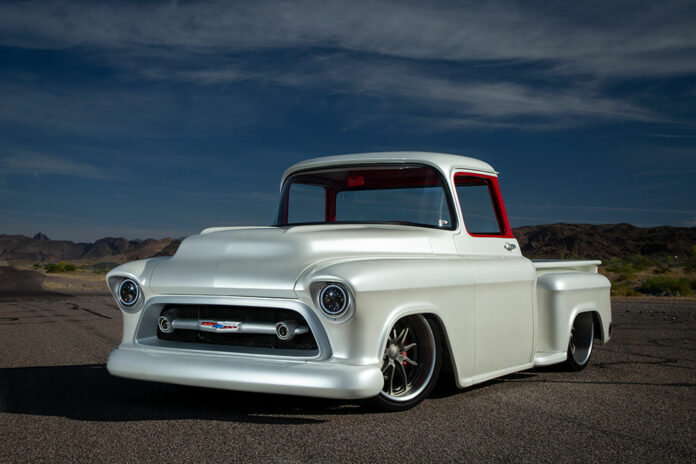 By Fuelish Media   –   Photography by Author

This ’57 Chevy, better known as “Snow White,” is no ordinary classic truck. The tale of its creation is part of why it has become a legend. It all began back in 2011 when Rob and Kerry Logsdon started a parts shop in Lake Havasu City, Arizona, to help create a career for their kids. With a specialty of providing quality sheet metal replacement products for classic trucks, they were solidified in the custom scene. 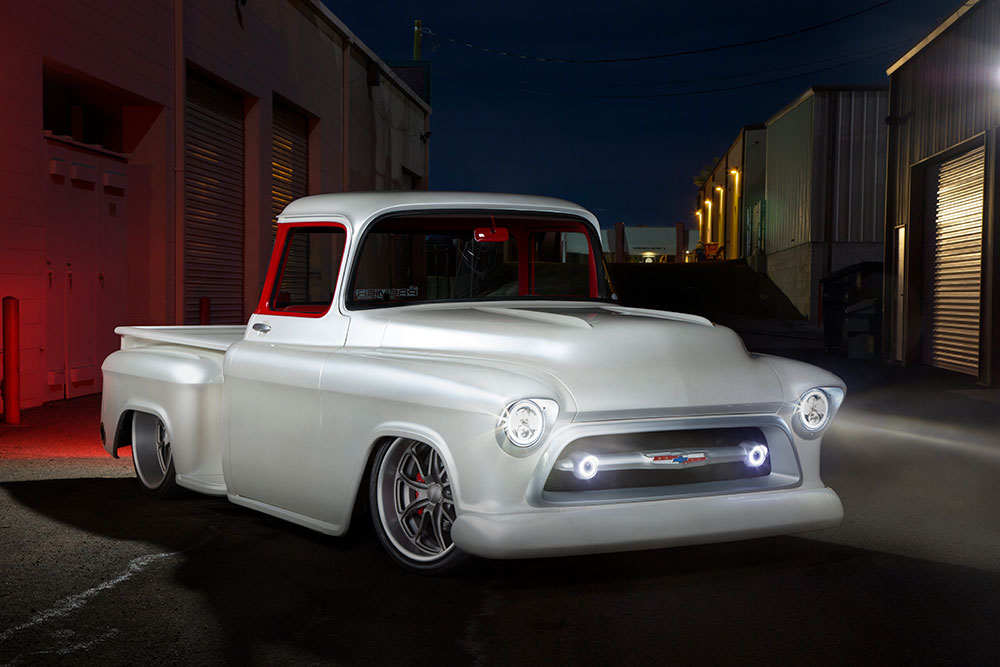 Years later, their son, Ross, started tinkering around in the back area of the shop, as he’d developed a passion for customizing. He would put his new skills to the test by building a ’62 Chevy C10 that was not only put back into running order but was made to shine and lay low. The old truck went to the SEMA Show in 2016 and served to promote Premier Street Rod as a shop that could build modernized rides. 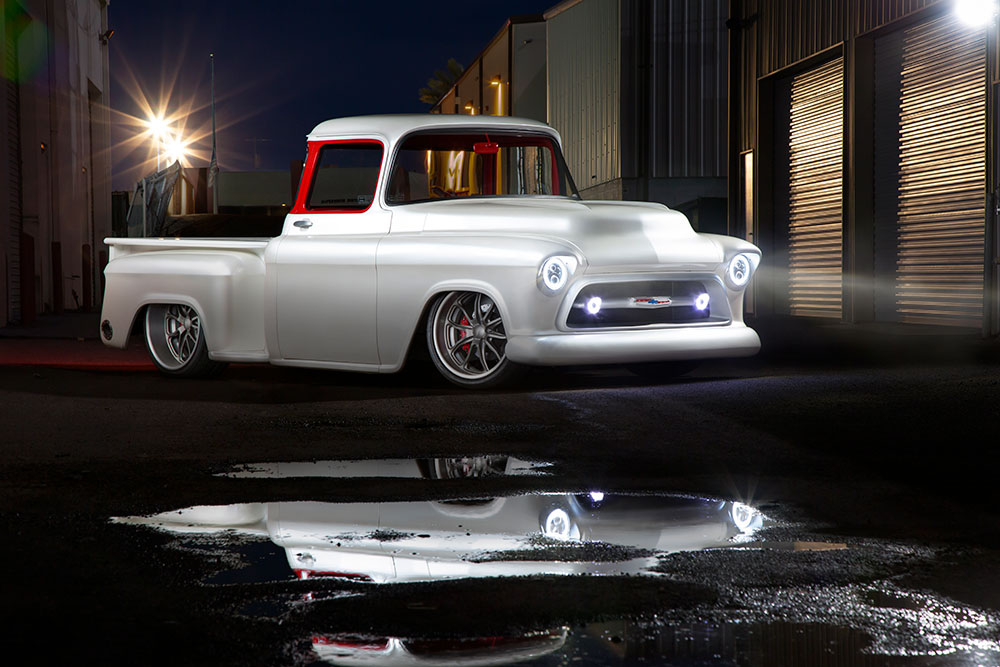 At the time, Premier offered ’47-53 Chevy complete truck bodies and were starting a line for ’55-59 Chevy trucks. These reproduction products are made better than the originals and have proved to be the perfect way to build one of these classic trucks. Rob knew that the best way to promote the new truck bodies would be to build a truck that could catch attention at all the biggest events. The only problem at the time was that Premier Street Rod was so invested into the new venture that there was no extra capital to fund a build. 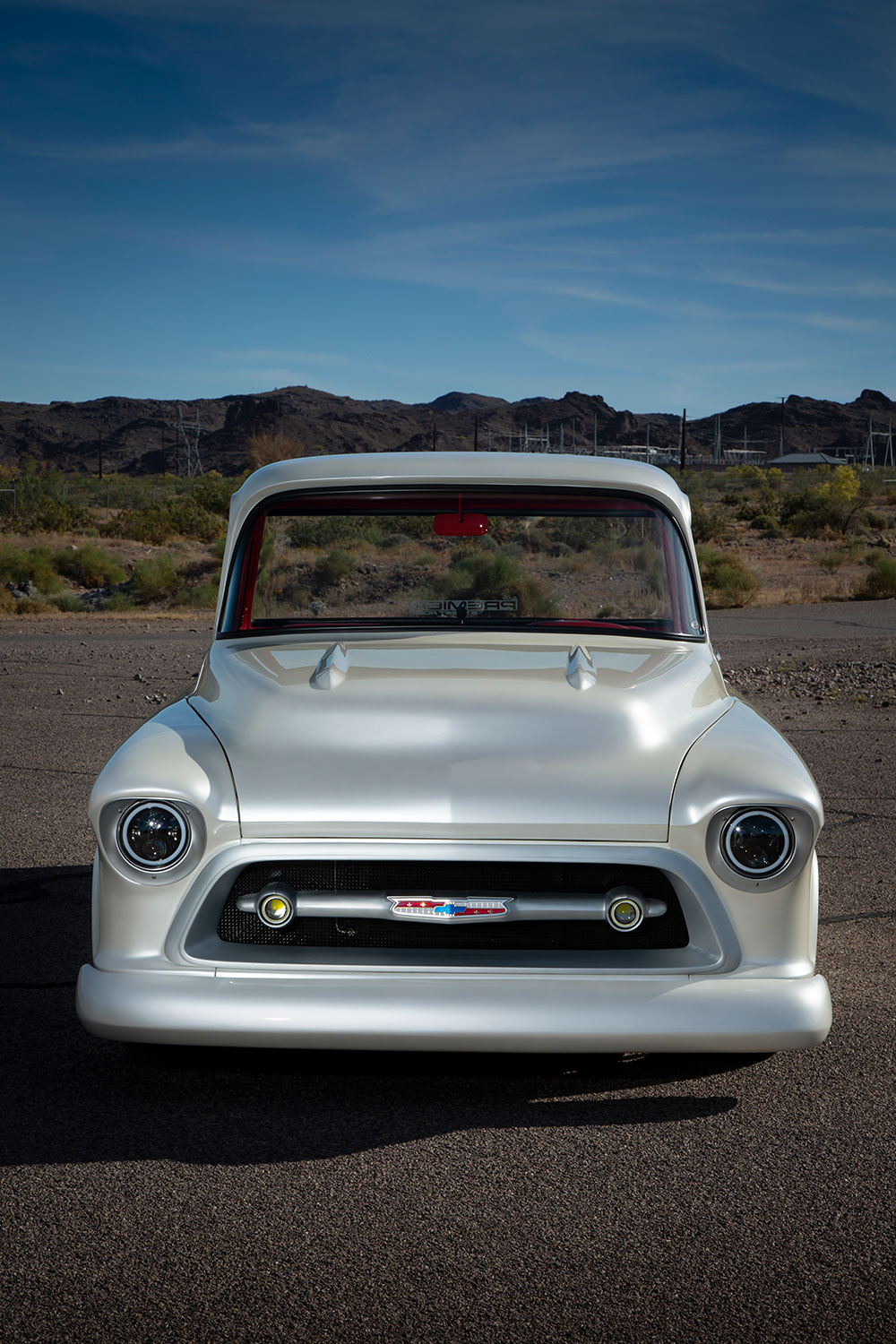 Through mutual friends, Rob met George Sepulveda and knew that he was a guy with a desire for owning stunning classic vehicles. While out at dinner one night, Rob ran across George and approached him about building a truck at cost to help move the idea forward. However, George was not a fan of trucks but agreed to come and check out what they had going on at the shop. The next day, George met up with Rob to further discuss the possible build and he was impressed by the talent of Ross and picked his brain about what he had in mind for the truck. George went home and later returned to tell the team, “Let’s do it!” 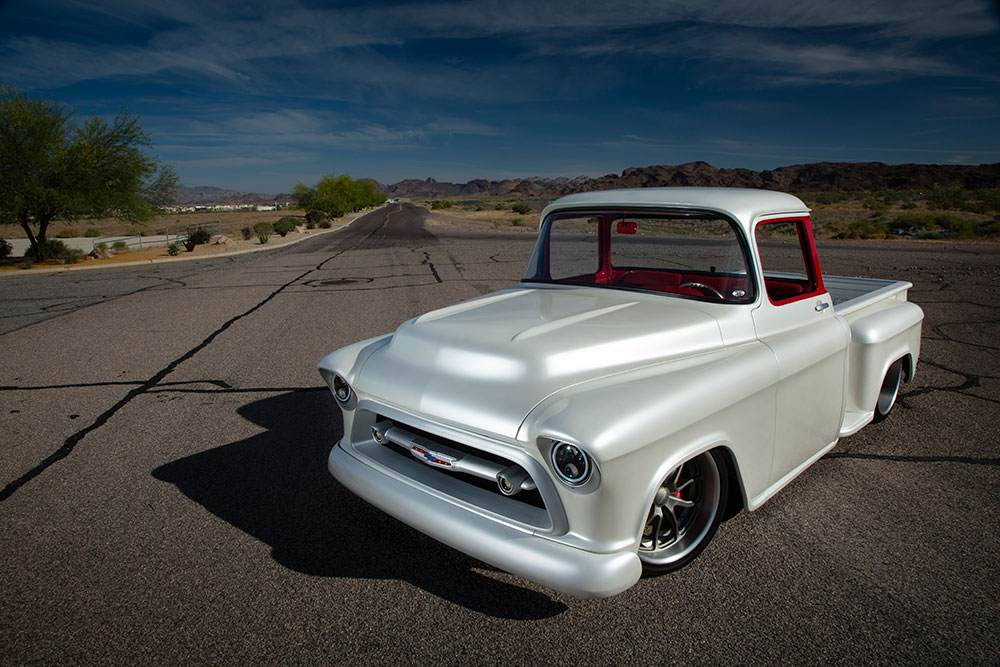 Getting a head start, the team assembled a shortbed ’57 Chevy truck with a big back window. Then, for extra styling, the grille was customized to feature a modified ’57 Bel Air center bar. Afterward, the body was bolted on top of a Total Cost Involved chassis with adjustable Ridetech ShockWaves controlled by an AccuAir management system. Up front is a BluePrint Engines LS3 engine with six-speed TREMEC T56 magnum transmission. 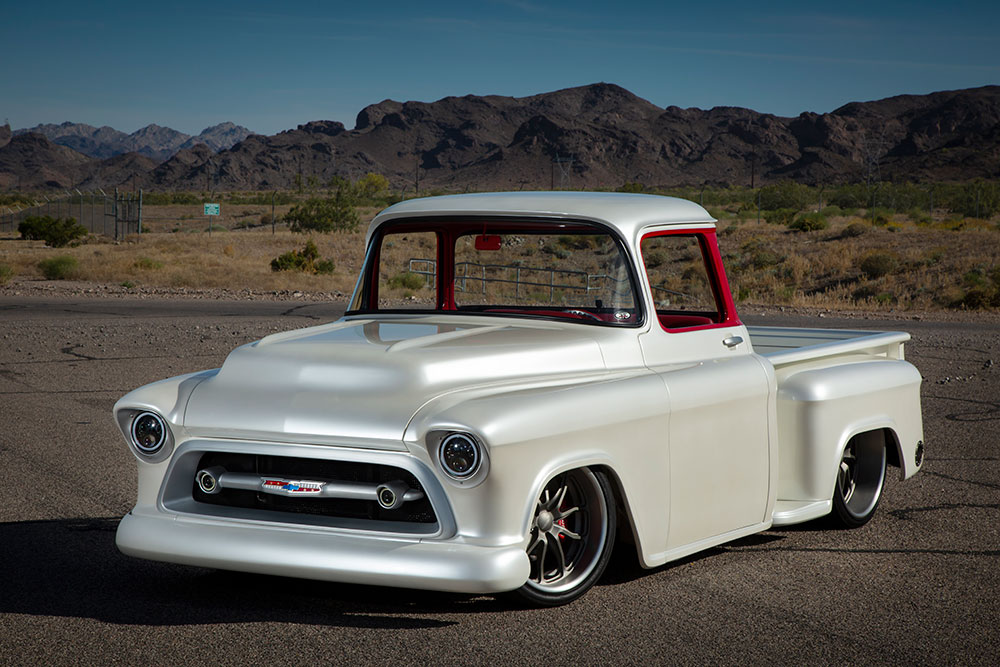 Taking it another step forward, the red leather interior was completely custom made by Ron Mangus and his team. The Chevy truck was also dressed in House of Kolor’s Snow White Pearl with Blue Blood Red paint accents. Completing the look is a set of 20×9 and 22×11 G-series Spyder billet Budnik wheels wrapped in 245/35ZR20 and 285/30ZR22 Invo Nitto tires that help keep traction on this beast. 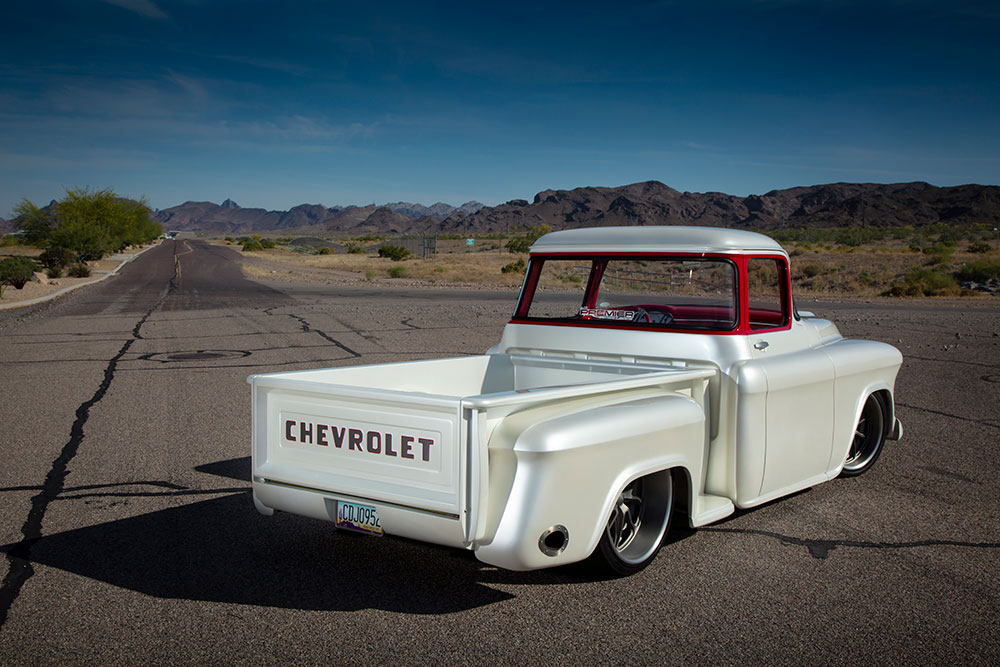 During the buildup, George was able to stop in every few days to check on the progress. Ross claims that this was very helpful during the process as he had never built a vehicle of this caliber before. With George’s experience, Ross was able to hone his skills to build a vehicle like never before. About halfway through the process, George began to really dig this old truck, which would later become the favorite of his entire collection. 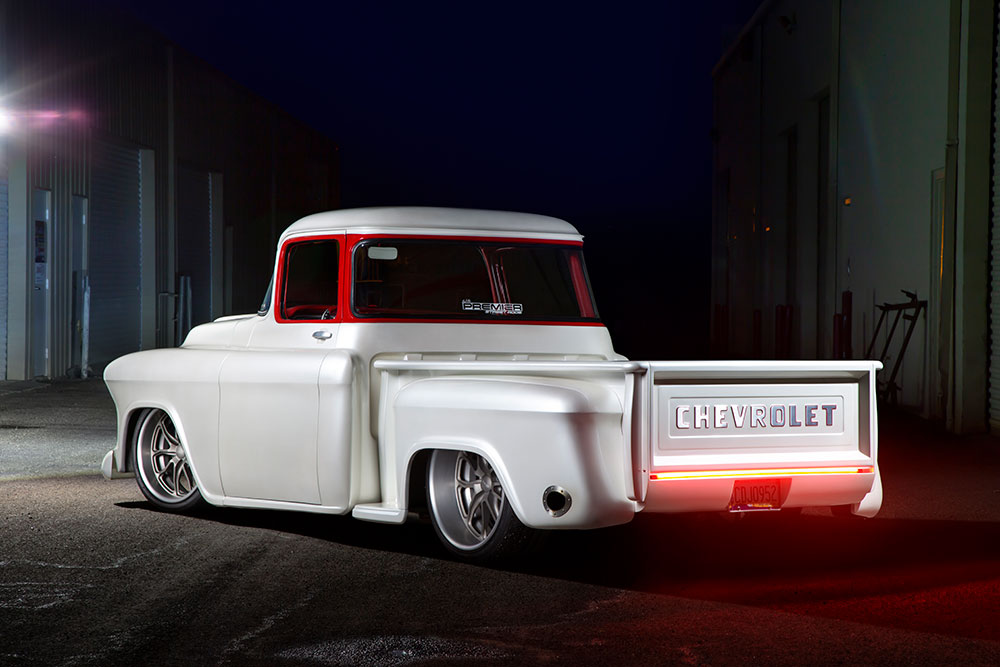 After a 10-month build process, the truck was finished and set for its debut at the 2017 SEMA Show. There, it made big waves and served its purpose of spreading the word about Premier Street Rod’s products and build capabilities. It was also taken to a few other shows where it garnered huge attention and helped promote the shop even further. The truck turned many heads and business soared with new clients looking to own a truck like this. The following year, Premier Street Rod built a ’56 Chevy pickup known as “Sinister” and it won them a coveted GM Design award. Premier Street Rod attributes this all to what they started with Snow White. 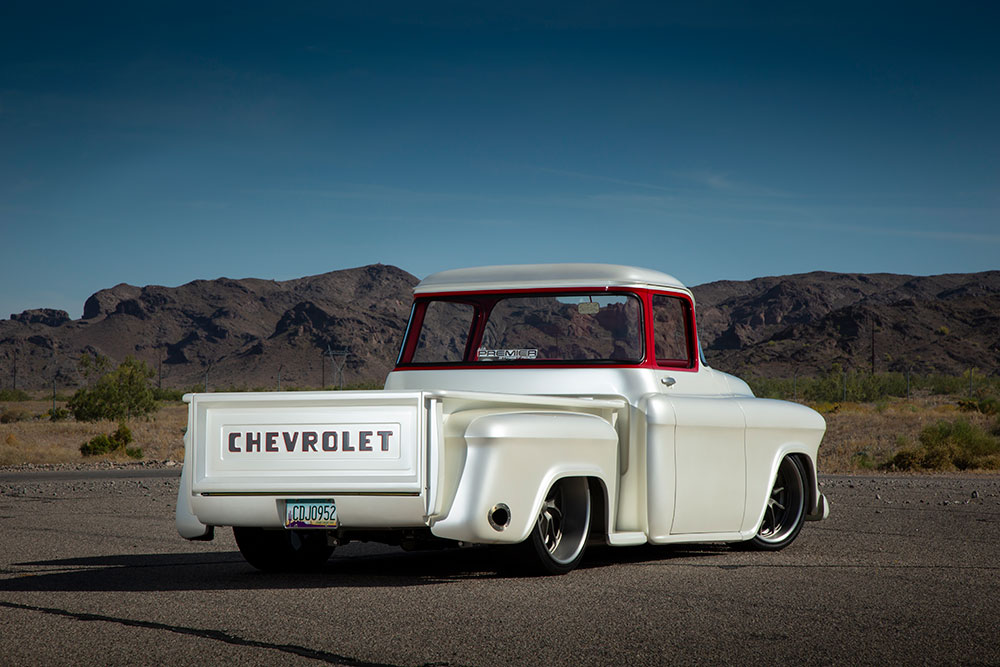 A few months after this ’57 Chevy was completed, George died and his wife India was inclined to hand the keys over to Rob. Since the time we shot these new photos of Snow White, we were informed that India also died, and we hope that she has joined her late husband George. With a heavy heart, we would like to dedicate this feature in memory of the Sepulvedas.