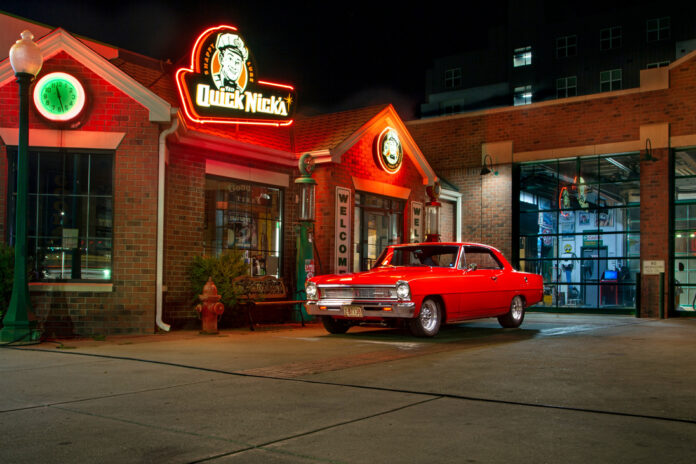 It seems the early Chevy Novas are in high demand these days, but the truth is many of them have been in the build process for a number of years. So, there is no denying their popularity, it’s just that they’ve been so for years. Good for us, as we are seeing the lengthy builds of these cool cars finally coming to fruition and hitting the streets.

Trent Young is one of those guys who has had his car “under the knife” for about 12 years. But let’s back up a bit–Trent found this ’66 Chevy II Nova in the Omaha World-Herald want ad section way back in 1992. The owner was asking $4,300 and it had some good stuff for the time: a rebuilt 283, Powerglide transmission, new brakes, exhaust, and some more updated pieces–Trent bit. “It needed paint and some interior work,” Trent says. “As I was stripping the paint I soon found out it needed a lot more bodywork than I had originally thought, and the floorpans were rusted out as well.” 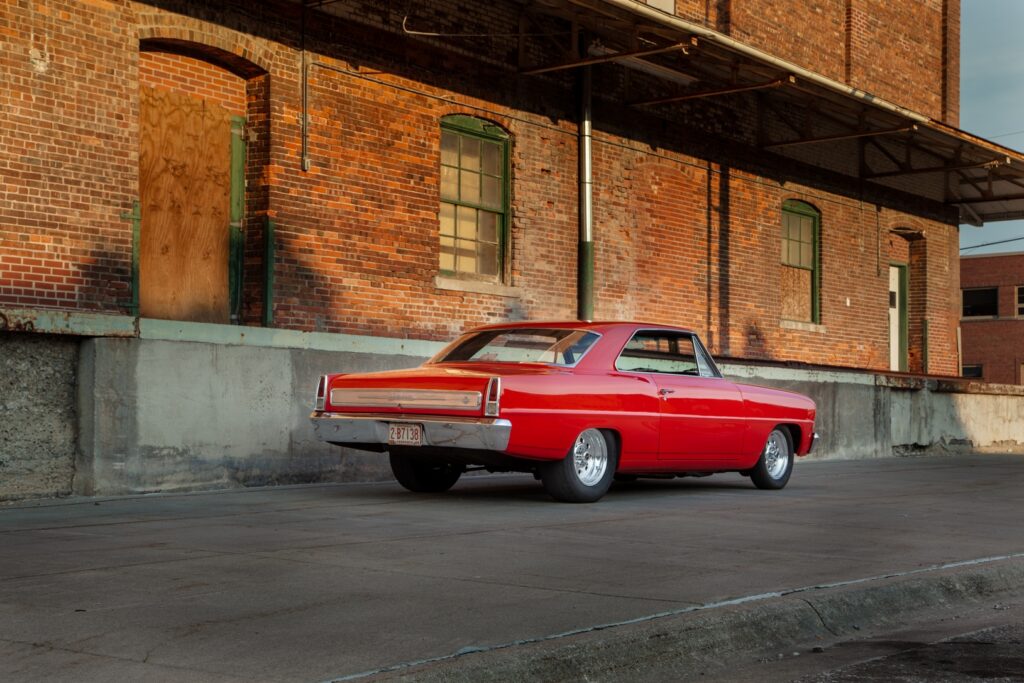 Trent developed a foundation for car building at a very young age while watching his dad, Jim, wrench on and buy and sell hot rods. He started out fetching tools and holding the light for his dad, and by the time he was 16 he did general car maintenance and some upgrades on his own as well. Like his pops, he began buying and selling a few cars here and there for some side cash.

So with the knowledge he absorbed, Trent tore the Nova down and basically started from scratch. Not exactly what he had in mind when he bought the car, but it was now in full-on restoration mode. 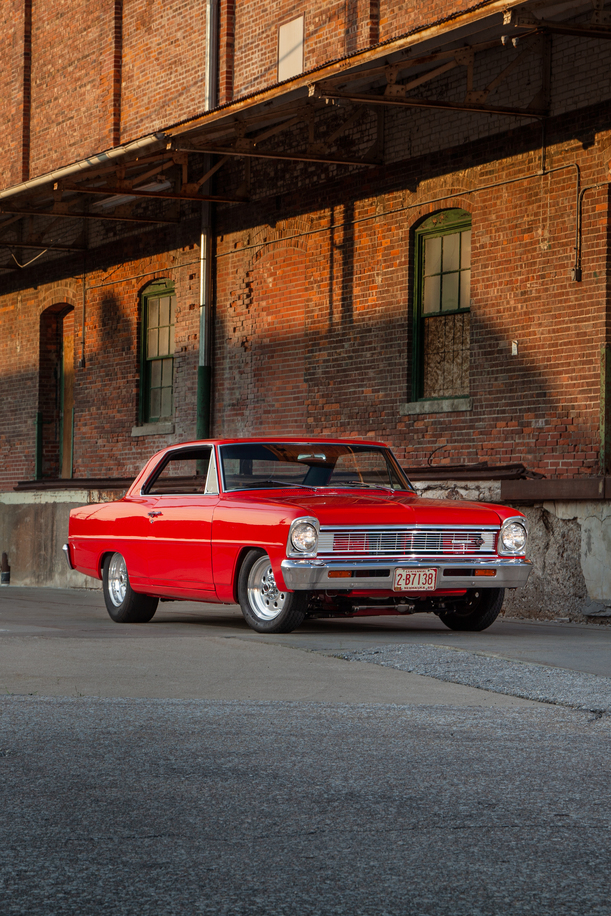 With the quarter-panels and fenders in a sad state, Trent hit up Huber’s Chevrolet in Omaha, Nebraska, for fresh fenders, and Duteau Chevrolet in nearby Lincoln suppled the quarter-panels. Trent dragged the car to a nearby one-man body shop to handle the quarter-panel install, but before finishing the job, the dude went out of business. Trent then dragged the car back to his dad’s shop and began the cutting and grinding process along with the help of his “support group,” consisting of his dad and brother Troy, who dove in to help with the metalwork and anything else where their skills were needed. Trent cleaned up the engine bay then sent the Nova to Dan Hunt out of Lincoln, Nebraska, to tune up the Young’s fabwork and prep the sheetmetal prior to dousing the body in PPG Torch Red.

Power-wise, Trent kept it old school–he pretty much had to, as this build started in the late ’90s. Going with a conventional small-block, he relied on Wollen Racing Engines (WRE), a local two-man shop in Lincoln, for machinework and assembly. They delivered a reliable mill with a bit of pep designed for mild dragstrip fun and longevity in a street performance situation. The 350ci workhorse was poked 0.60 over and carries some Corvette lineage with a 327 big journal crank. Scat H-beam rods and Keith Black 10:1 hypereutectic pistons finish off the short-block. Steel Chevy double-hump heads keep the old-school stage in check. 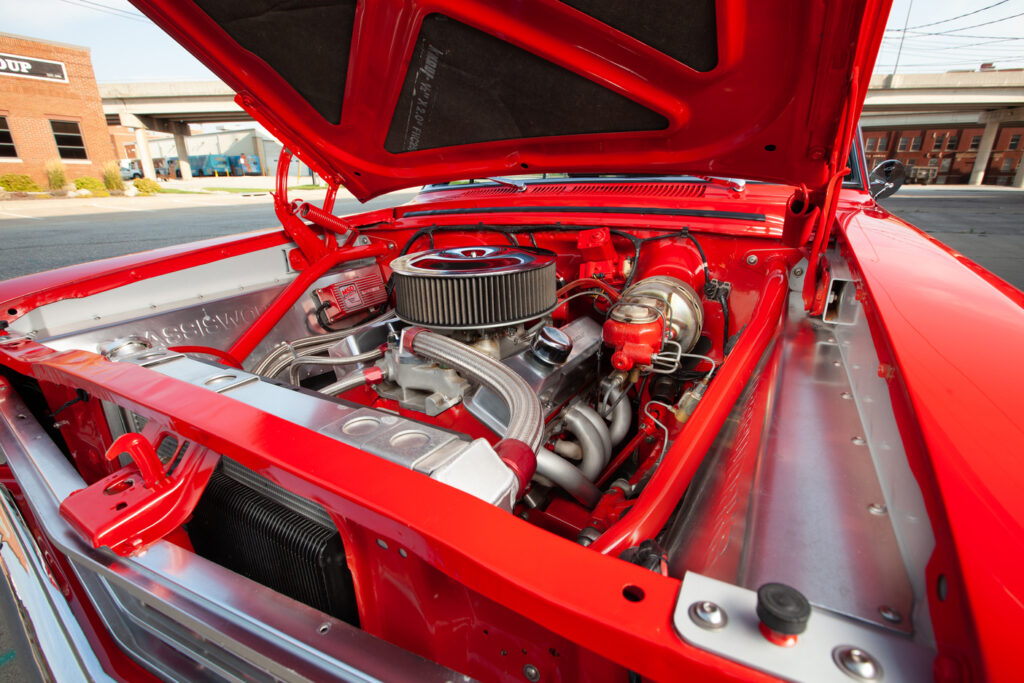 A Demon 650-cfm carb sits atop a Weiand Team G intake and an MSD 6AL lights the fuse. The exhaust system starts with ceramic-coated Chassisworks 1¾-inch tube headers with 3-inch collectors and custom 3-inch stainless exhaust stitched up by Rex Moore then topped it with a set of Flowmaster Delta Flow 40 series mufflers. The ensemble won’t light the world on fire in today’s horsepower reality, but that wasn’t the goal back in 2003 and still isn’t today. The car offers enough moxie to keep Trent happy when he takes it to the dragstrip, and it draws a lot of attention on cruises for a car built almost 20 years ago. “I dunno, I just like the car how it is,” Trent says. “Sure, I could do all kinds of updates, more horsepower being one of them, but I like driving it and don’t really want it to be down for an extended amount of time.” 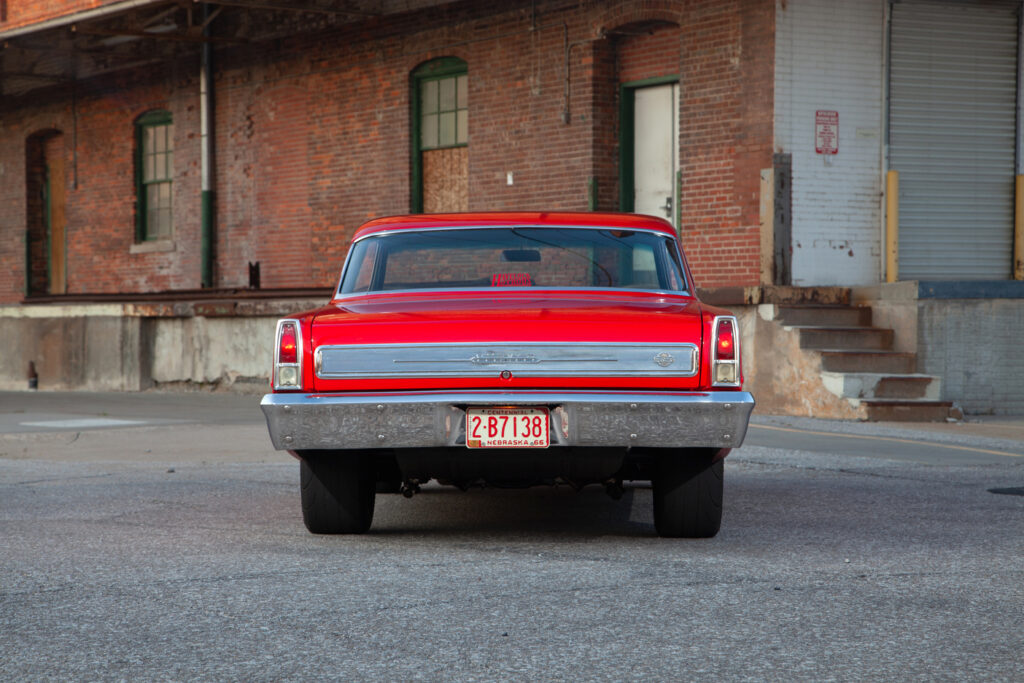 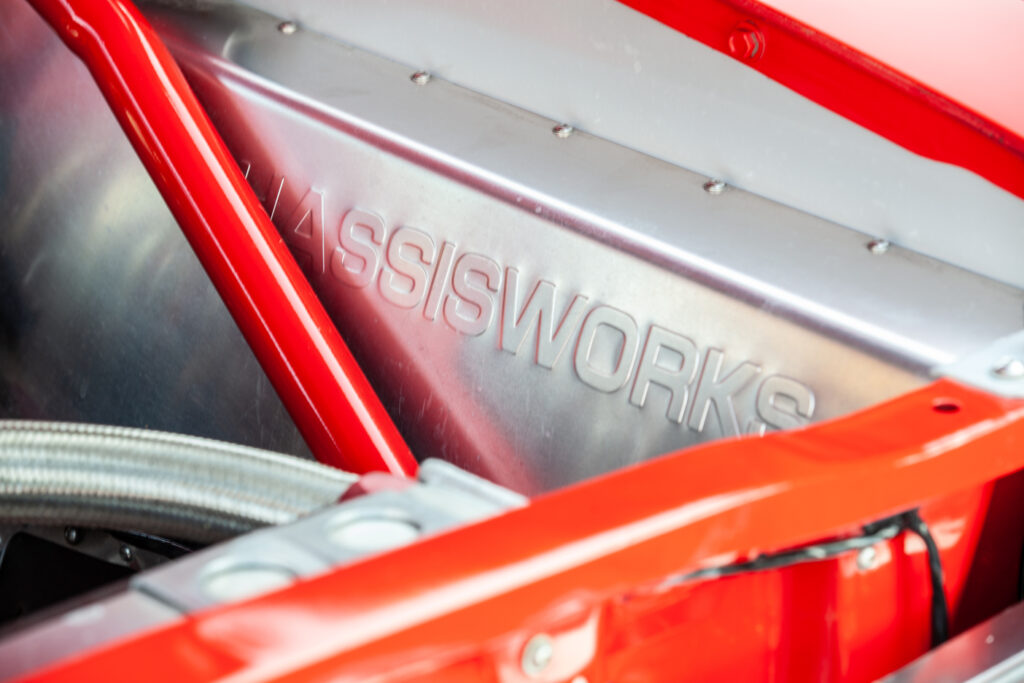 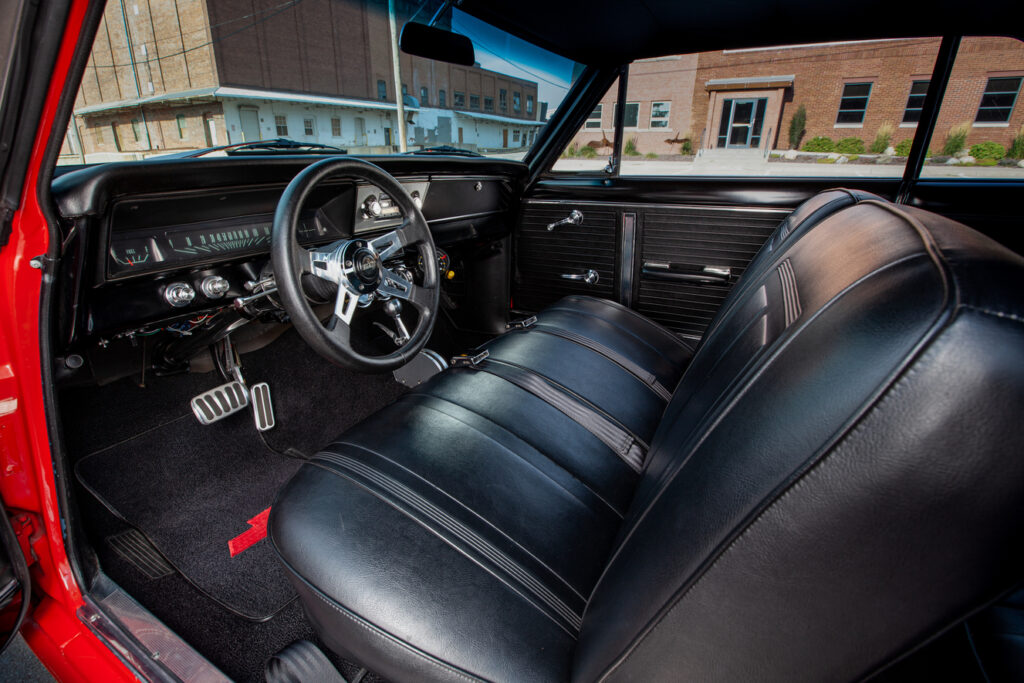 Trent’s cubicle is a time stamp of the car’s “born-on date” as the stock dash and gauges are surrounded by factory replacement bits. The door panels, black loop carpet, and upholstery are sourced from the Year One catalog. Trent defends running a bench seat as he kinda likes how they look and feel. Besides he’d rather spend the coin it costs for original buckets in other areas and this is what the car came with and he has no intentions of it making the horsepower that would require a racing harness or rollcage. Although the cassette player certainly isn’t of ’66 vintage, it sets up nicely and clings onto the ’90s-era this car establishes. Yeah, we know the Grant steering wheel and Flaming River column are modern bits, but they add a little pizazz and go well with the Lokar pedals.

“There were a few times where I was going to totally shelf the build,” Trent remarks. “Having the car in pieces and waiting for work to get done that was out of my hands made me want to give up” Trent remarks. “But my dad said the car had to leave the same way it got here: under its own power. I can’t thank him and my brother enough for all their help with the build and keeping me focused on making it to the finish line.

Trent’s Chevy II may lack the boisterous, high-horsepower personality found on many of today’s muscle car builds, but he’s totally content driving and dragging his little Nova just the way it is–bench seat and all. 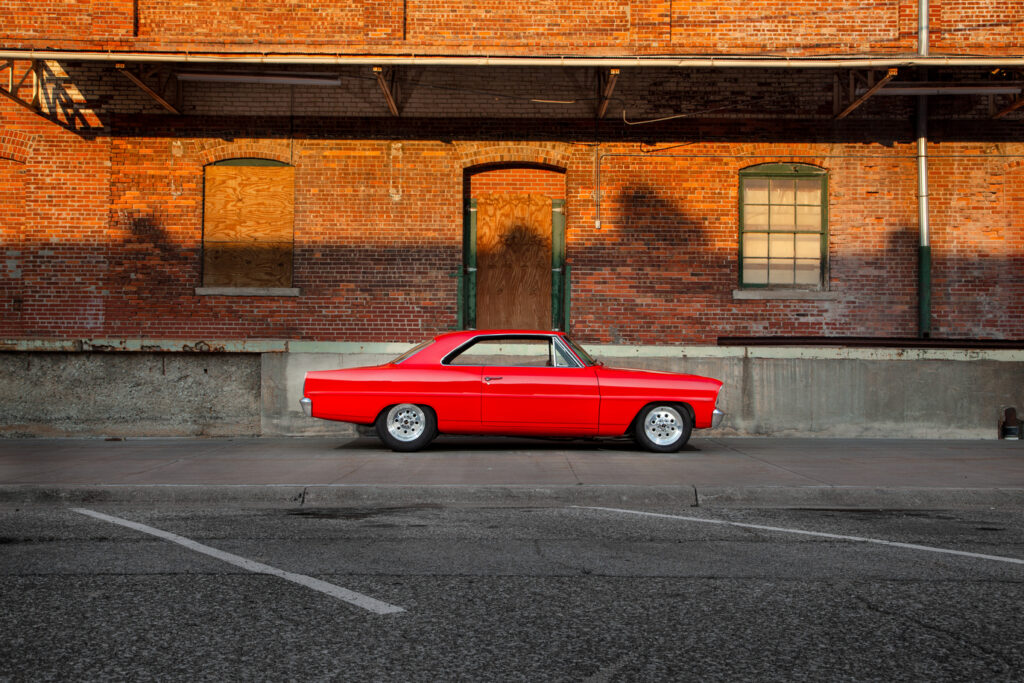