Every year the rodding world waits to see who will win any one of the prestigious indoor or outdoor awards. Without question the longest running of the grouping is the Grand National Roadster Show’s (GNRS) America’s Most Beautiful Roadster (AMBR). For 2022 it was the 1934 Chevy roadster belonging to Jeff Breault of Wichita, Kansas, who took home the top honors from the GNRS. This is only the second time in its history that the AMBR was given to a Chevy, making it even more impressive. (The first time was in 2014 when Wes Rydell took home the top honors with his 1935 Chevy phaeton.) The perpetual 10-foot trophy is something every roadster owner and builder secretly, or not-so secretly, aspires to. 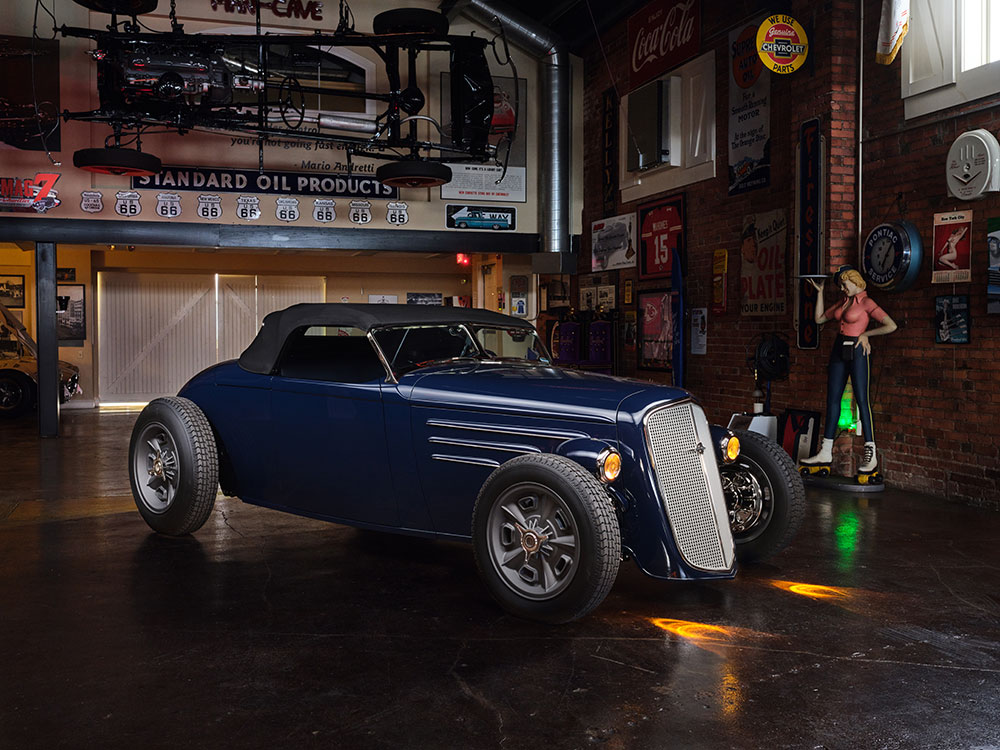 Over the course of the past five months Modern Rodding has featured four articles (linked at the bottom of this page). This month will wrap up our coverage of this year’s AMBR-winning roadster with its final feature. 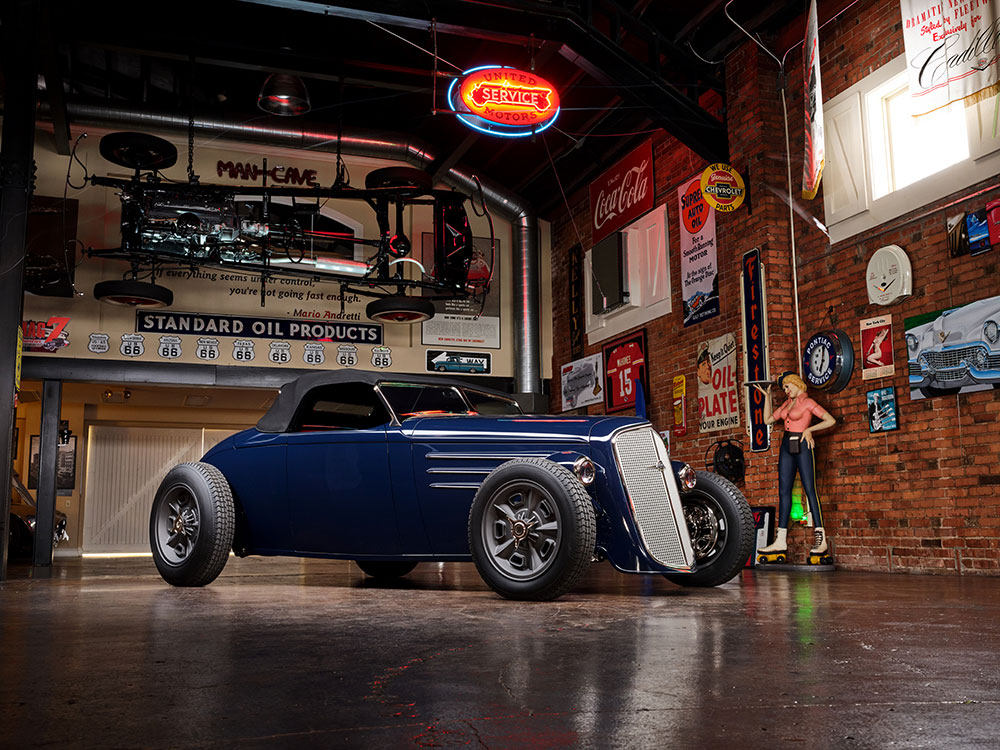 The AMBR recognition and accompanying ARP sponsorship ($12,500 check) that accompanies it is sure to have everyone in the rodding world taking notice. The award does bring recognition. That’s what’s so great about any major award–there are those who agree and some who don’t. Hot rodding is all about expressing one’s own imagination and creative abilities. The winner isn’t supposed to be a total crowd pleaser but rather make all of us think. We can appreciate the efforts and there are many ideas all of us can take from these types of hot rods and apply to our own builds. 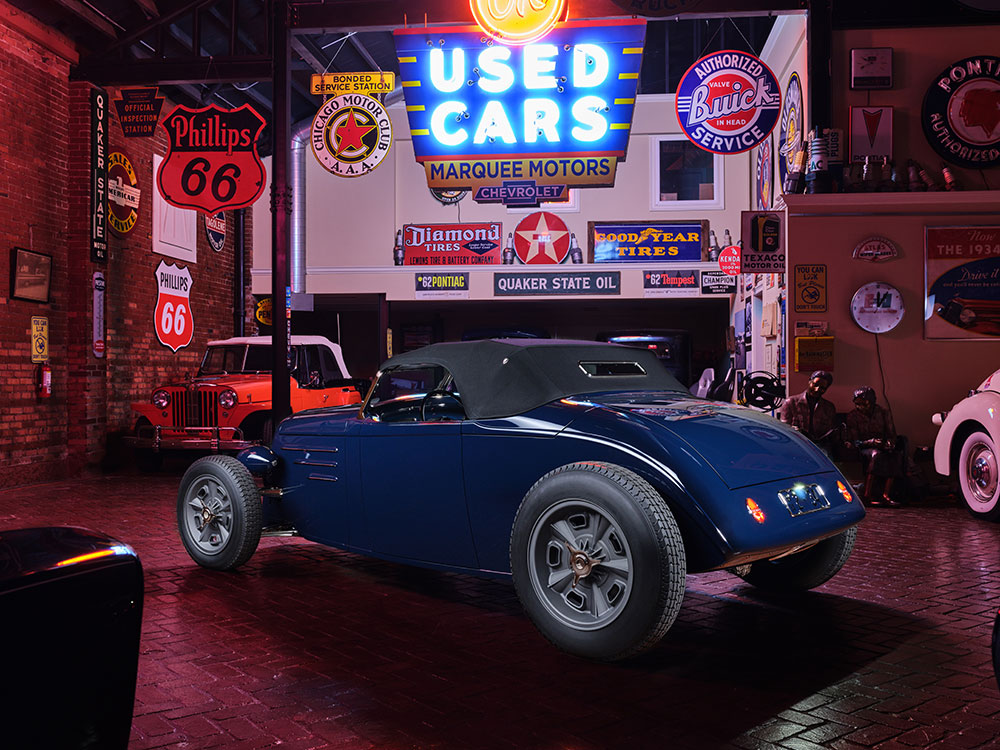 Tim Devlin of Devlin Rod and Customs (DR&C) worked with Eric Black of e. Black Design Co. to produce the final build you see before you. (It should be noted that Black was called upon for all the exterior design work while Tavis Highlander received the nod for engine compartment, interior, and gauge work.) 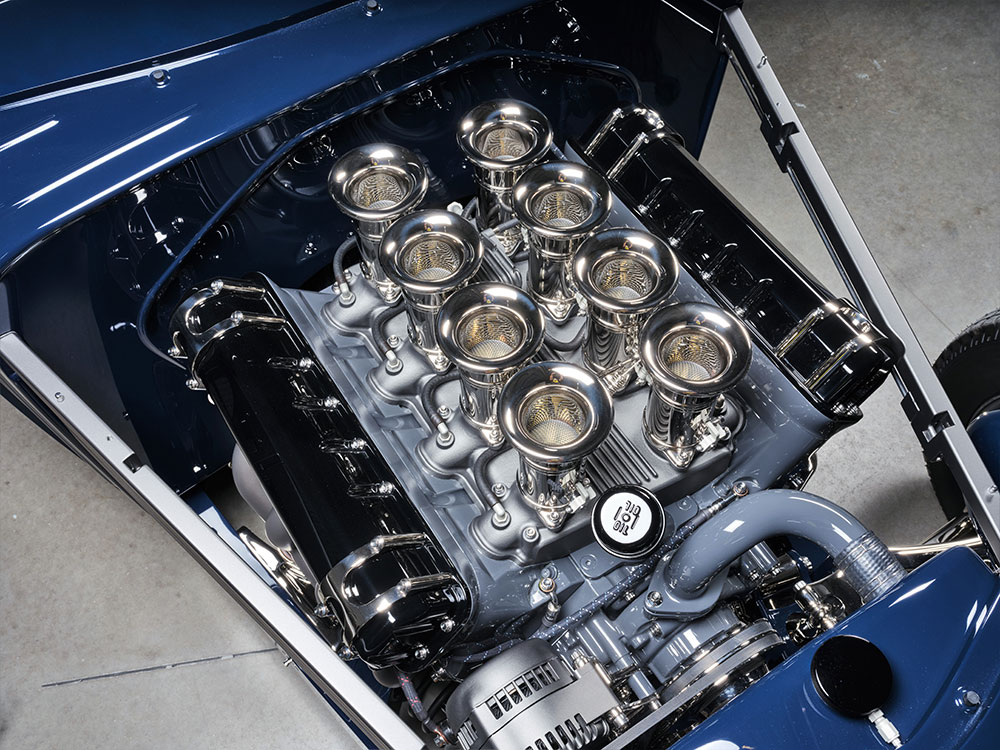 The foundation for this 1934 Chevy roadster is a custom chassis from Roadster Shop that features a one-off Independent Front Suspension. Jeremy Gerber of Roadster Shop freely admits that “… this was the most labor-intensive custom chassis ever attempted to date by us.” In back we see traditional rodding fare with a V8–style Winters quick change rear end with the 8-7/8-inch ring gear that runs a 3.78 ratio. The steel tubes and bells are painted while the quick-change itself features a dull nickel plating that is then polished to a brilliant finish. 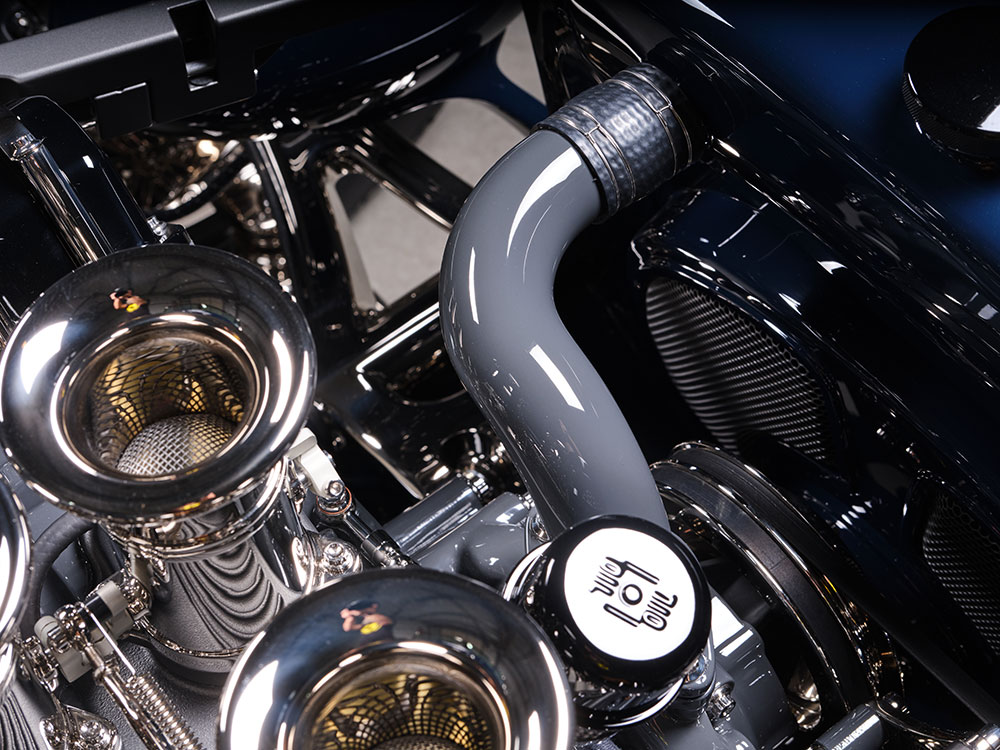 Looking around you will see that a Bowler Transmissions–prepped TREMEC TKO is used along with the current rodding standard, the Chevy LS engine. A look back at the July ’22 issue of Modern Rodding will show you that this isn’t just any ol’ LS engine. While everything on this vintage roadster was massaged, there are any number of one-off items, such as the one-off custom wheels. The billet aluminum wheels give the appearance of vintage Indy Halibrand wheels. Look closely and you will note the cast finish comes from the shot peened finish. From here the wheels were coated in a Tungsten Cerakote while the knockoffs were, as the quickie, dull nickel plated and then polished. These specialty wheels are mounted with the always-popular hot rod tire in the Coker/Excelsior Stahl Sport Radial measuring 5.00R16 in front and 6.00/6.50R18 in back. Hidden behind this wheel and tire combination are the brakes. 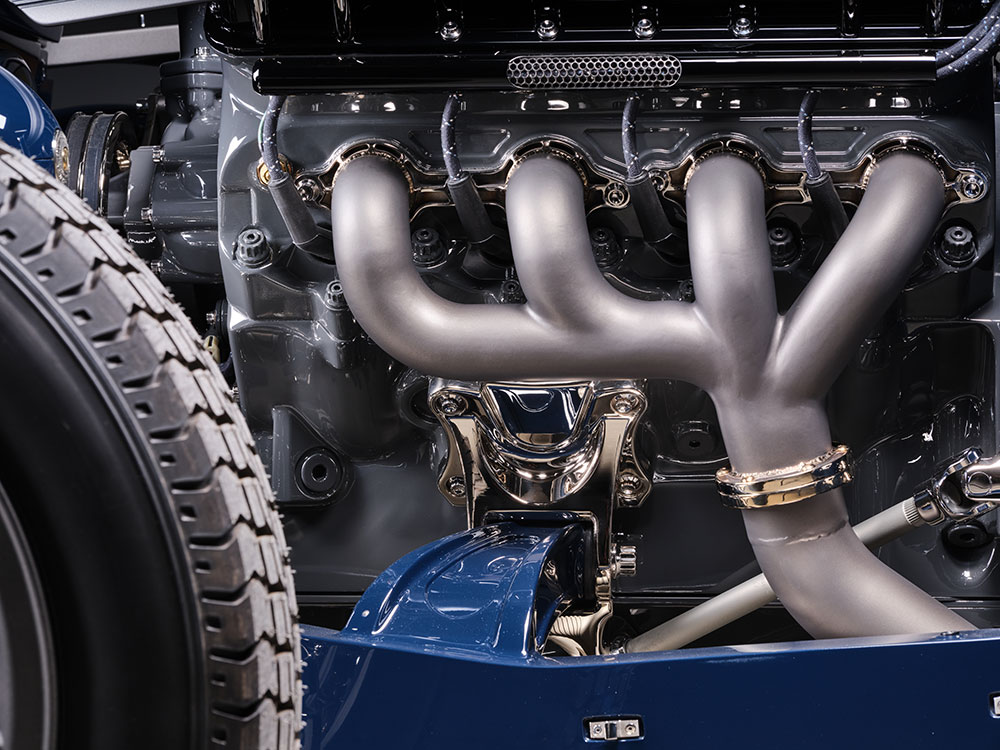 The name Wilwood should sound familiar to hot rodders but we bet you haven’t seen them presented in their current fashion. The Wilwood rotors are hidden behind the custom backing plates both in the front and the rear. Nestled behind the brakes are the Cerakote-coated coilovers at the corners. Throughout the build you will see what we can only surmise to be several boxes full of modified and polished ARP bolts. Throughout the entire build you will see a great deal of stunning brightwork, whether it be polishing or chrome. This staggering effort fell to Jon Wright of Custom Chrome Plating whose staff spent literally months working on the project to get just the right look. 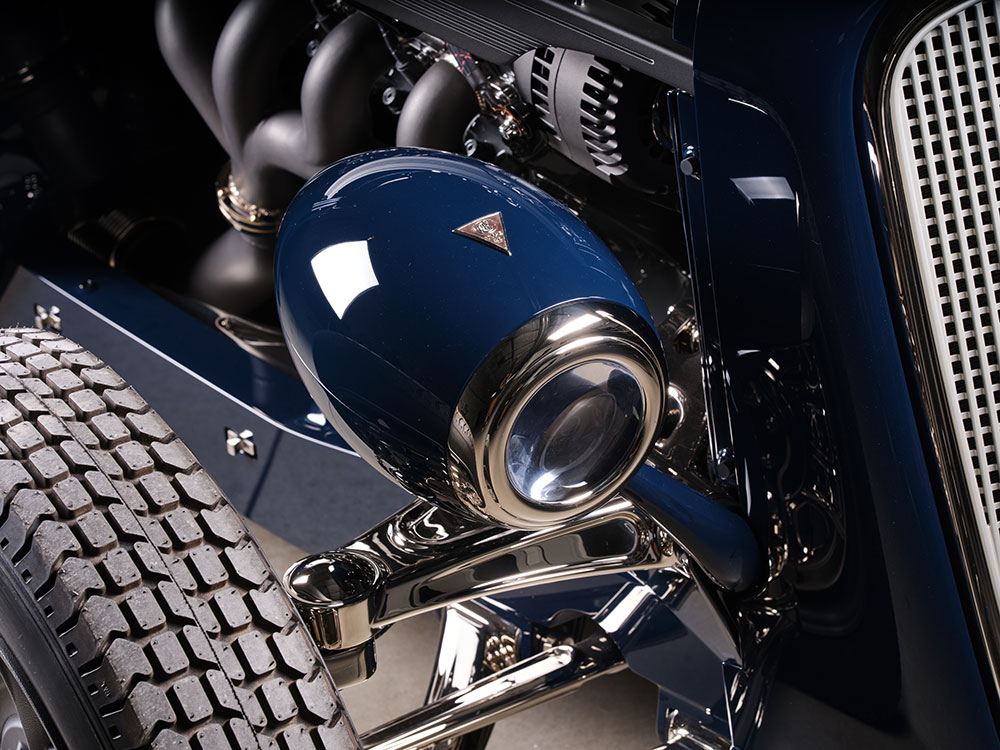 We’ve spoken about the custom frame and all its trimmings but what about the “pride and joy” of any hot rod: the heartbeat that comes in the form of a highly customized LS engine. The power is an LS that was built for performance at Keith and Jeff Dorton’s shop, Automotive Specialists Racing Engines, with an output of 654 hp at 618 lb-ft of torque. With the potent power plant in hand it was then off to Alan Johnson of Johnson’s Hot Rod Shop in Alabama. It was Johnson’s aim to make the modern V8 engine look like something with lots of heritage. The aluminum LS heads were reworked, giving the appearance of something that might have come on an old-timey small block Chevy. Interestingly the LS V8 comes from the factory with an accessory drive serpentine pulley system. However, this doesn’t lend itself to the vintage appearance Jeff and Devlin were after. Johnson knew what he had to do. A traditional V-belt system was designed, necessitating that all the one-off components would need to be designed. In the end Johnson conveyed a pulley system that looked vintage but delivers the accessory belt performance that is required for today’s use. 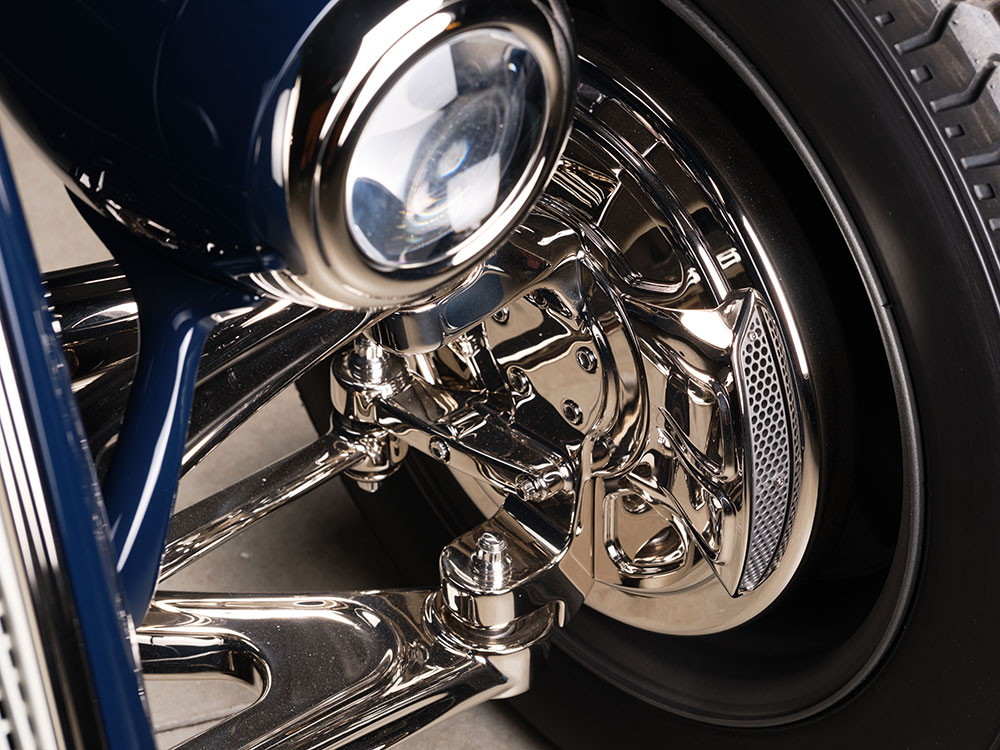 Of note are the custom LS valve covers. Johnson wanted something that not only looked vintage but would be distinctive. If you give a stare at the valve covers, you will see they have what might be considered a ’30s-era Rolls-Royce appearance. The period one-off valve covers rest over the real valve covers and it is in this “not to be seen” area that the LS coil packs are placed. Modern LS engines have sensors, lots of sensors. In this application the idle air control motor and oil pressure sender were removed from the engine. Their new “home” rests on top of the Bowler-prepped TREMEC transmission beneath their own inspection cover beneath the shifter bezel. Bowler supplied the mechanical part of the shift linkage, while EVOD fabricated the shift arm; the painted shift ball on top is a Lokar shift knob. 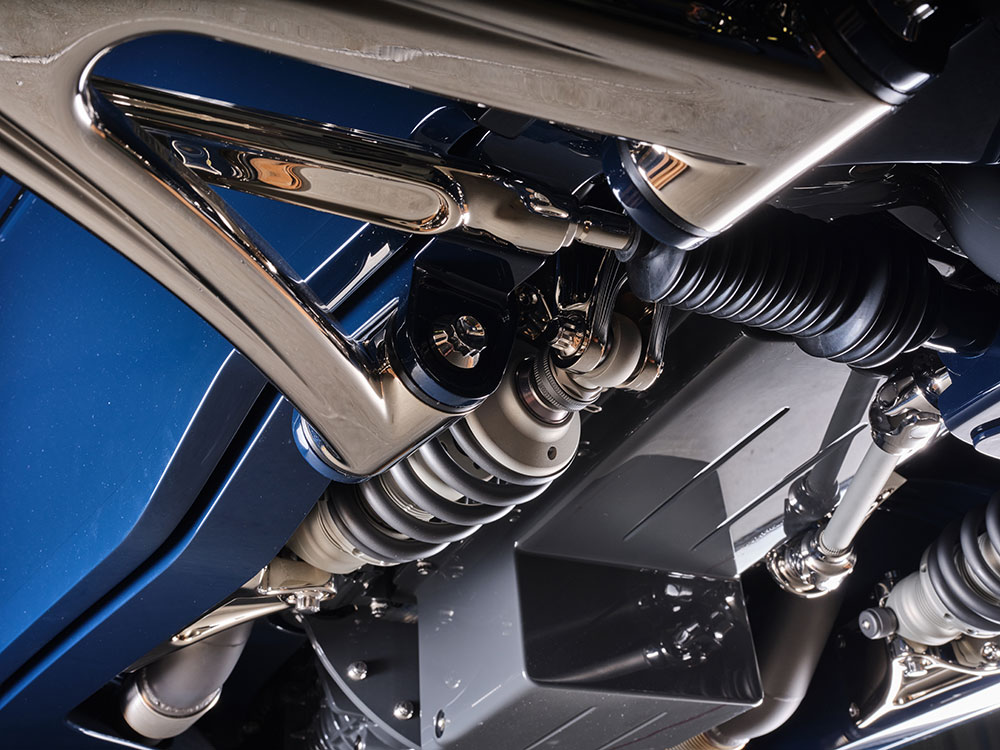 The custom intake manifold is the mounting point for the eight-stack injection and it too hides the electronic fuel injection components. A FAST XFI ECU and the traction control (of course) are also implemented into this build. 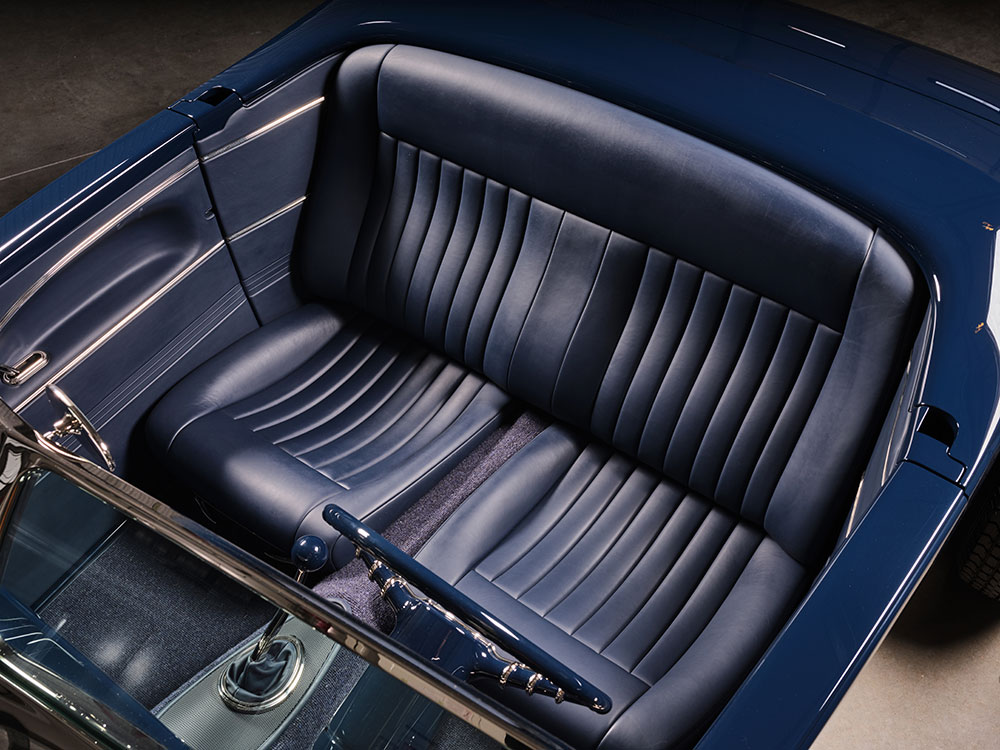 The interior features many original one-off features. As mentioned earlier Highlander received the nod for the interior design with the likes of Classic Instruments coming through with the custom gauges and panel design. The control knobs located below the gauge cluster are more EVOD machine work. The center knob serves as the ignition key. On top of the Ididit steering column, altered by Devlin Rod and Customs, is a loose interpretation of a Chevy pickup steering wheel that Highlander designed and EVOD built–some 13 pieces! More EVOD handiwork comes in the form of the three pedals with the brake assembly working off a Kugel Komponents 90-pedal and master cylinder bracket assembly. 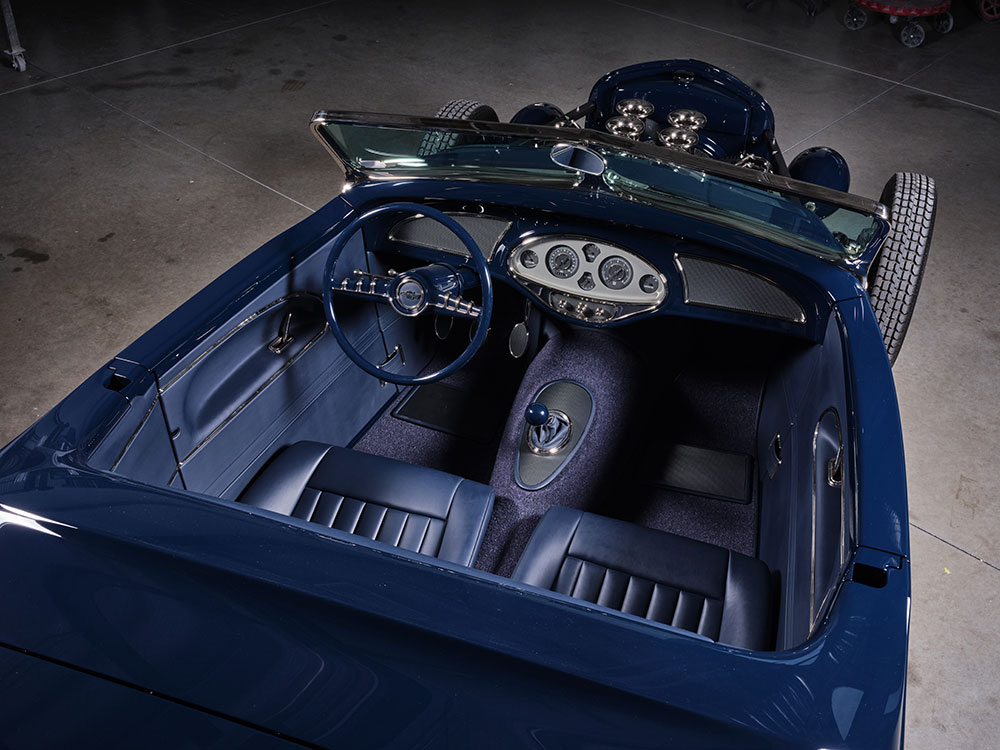 As for the upholstery that credit goes to Chuck and Braden Rowland of Chuck Rowland Interiors for stitching the custom seating, panels, and carpeting. However, one of the most notable modifications to the Chevy roadster is the folding convertible top. Jeff is a fan of early Corvettes and having a ’63 convertible he thought it would be cool if his 1934 Chevy roadster had a similar retractable top. Both Jeff and Devlin went to see Mike Loewengruber of American Speed Company (ASC) to see if they could get some help about the retractable top. Well, ASC not only supplied a great deal of information but also the initial top hardware and mechanism from which Devlin Rod and Customs made the necessary modifications. Of course, Devlin Rod and Customs had to make a custom windshield to work with the top and tie all together and make it work. The soft part (material) of the top was then covered by Scott Downey of Downey’s Auto Upholstery.

Behind The Build ‘34 Chevy Roadster: All about the AMBR-winning 1934 Chevy roadster and its LS Engine)

The body itself is a 1934 Chevy roadster that has undergone a myriad of modifications and outright freshly created skins, such as the doors. Oftentimes we cannot really tell what’s been done when looking at a finished project. We just know something was changed but we cannot quite put our finger on it. Such is the case with Jeff’s 1934 Chevy roadster as there were so many sheetmetal modifications. So, here are some of the Devlin Rod and Customs body modifications that they fabricated. The floor, rocker panel, and trunk flooring were all shaped to fit the contour of the Roadster Shop frame rails. The original ’34 Chevy hood louvers were integrated into the freshly minted hood sides along with the new top. Moving along the rear wheel arches were reworked to match the tire/wheel profile along with the bodyline reshaped and made larger. 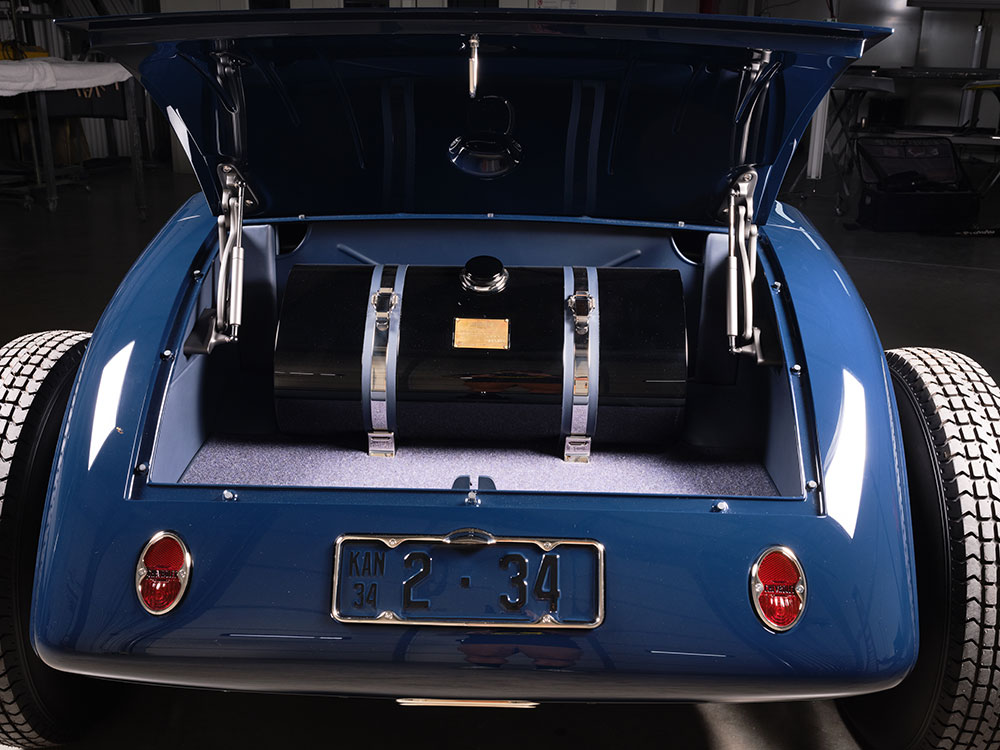 The Devlin Rod and Customs staff consisting of Austin Sacket, Gage Sacket, Brandon Wegerle, and Dave Wehrheim managed the sheetmetal effort, body- and paintwork. The deep blue color is based on a BASF color using R-M Diamont basecoat with a Glasurit clear coat. 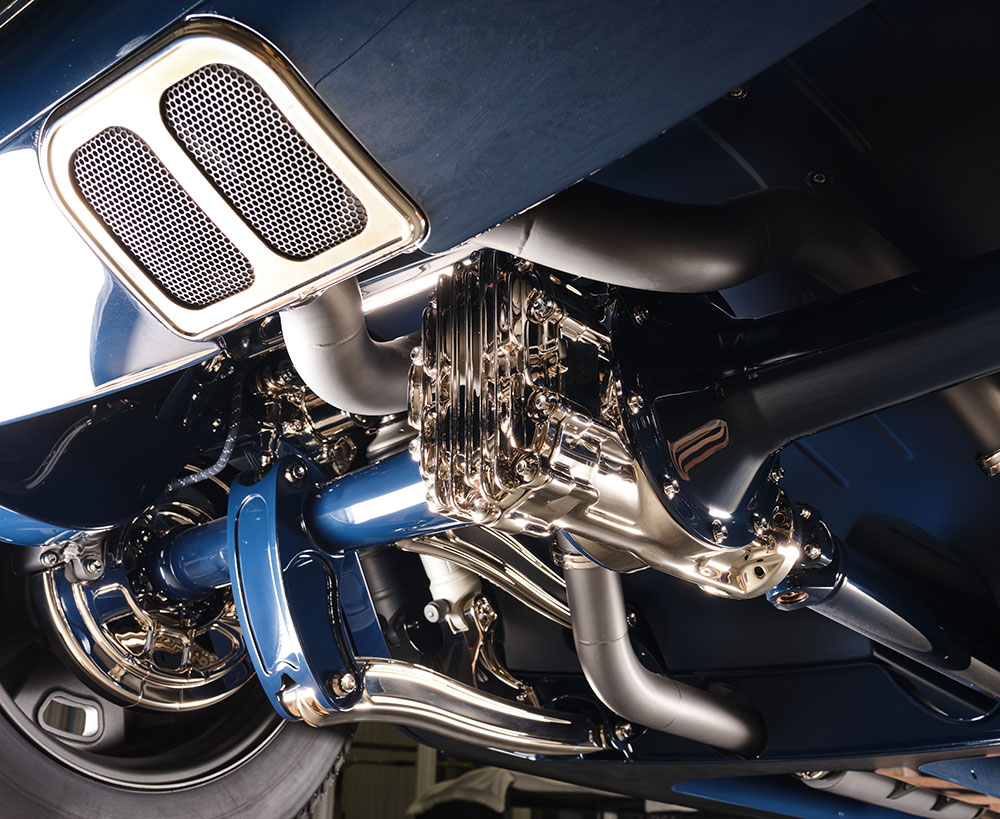 If you find yourself wanting to see this amazing roadster in person, be on the lookout: the ’34 Chevy roadster should make the rounds at Goodguys Columbus for Street Rod of the Year competition, NSRA Street Rod Nationals in the Builders Showcase, Shades of the Past for the Triple Crown of Rodding, SEMA, and Gathering at the ROC. 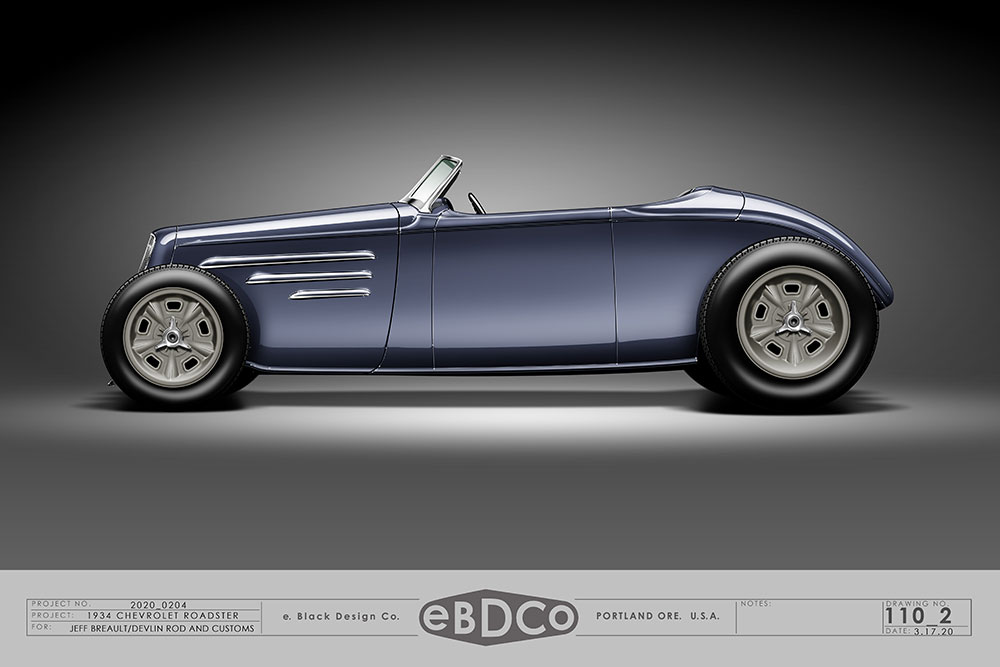 America’s Most Beautiful Roadster From Start to Finish:

Over the course of the past five months Modern Rodding has featured four (including this month) articles that showed the roadster before paint (Apr. ’22, America’s Most Beautiful Roadster 2022 Winner, ’34 Chevy), sheet metal fabrication (May ’22, Award Winning Metal Work: 1934 Chevy Roadster), and the impressive LS motor that was massaged and altered to produce power and a distinctive look (July ’22, All about the AMBR-winning 1934 Chevy roadster and its LS Engine). This month will wrap up our coverage of this year’s AMBR-winning roadster with its final feature.