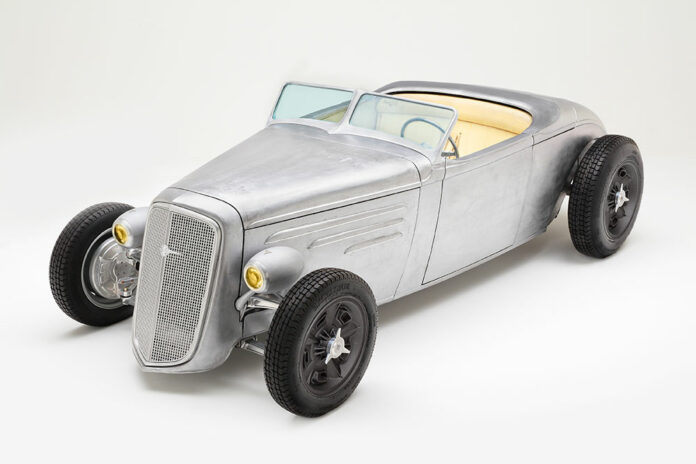 What Makes America’s Most Beautiful Roadster?

It’s that time of the year when the hot rod world blooms. The rodding year begins with the Grand National Roadster Show and the unveiling of what’s new and truly amazing in our world. Taking home the big prize, literally in the nearly 10-foot-tall trophy, was Jeff Breault of Wichita, Kansas. Under the discerning eye of Tim Devlin of Devlin Rod and Customs, they built the award-winning 1934 Chevrolet Master Roadster. From here it was awarded the America’s Most Beautiful Roadster (AMBR) that’s presented by ARP and includes a $12,500 check. If you are like me, and it’s probably best that you aren’t, we all wonder what this amazing hot rod roadster must have looked like before the endless fabrication, flawless body- and paintwork, and talented stitchwork was applied. Well, here we go. 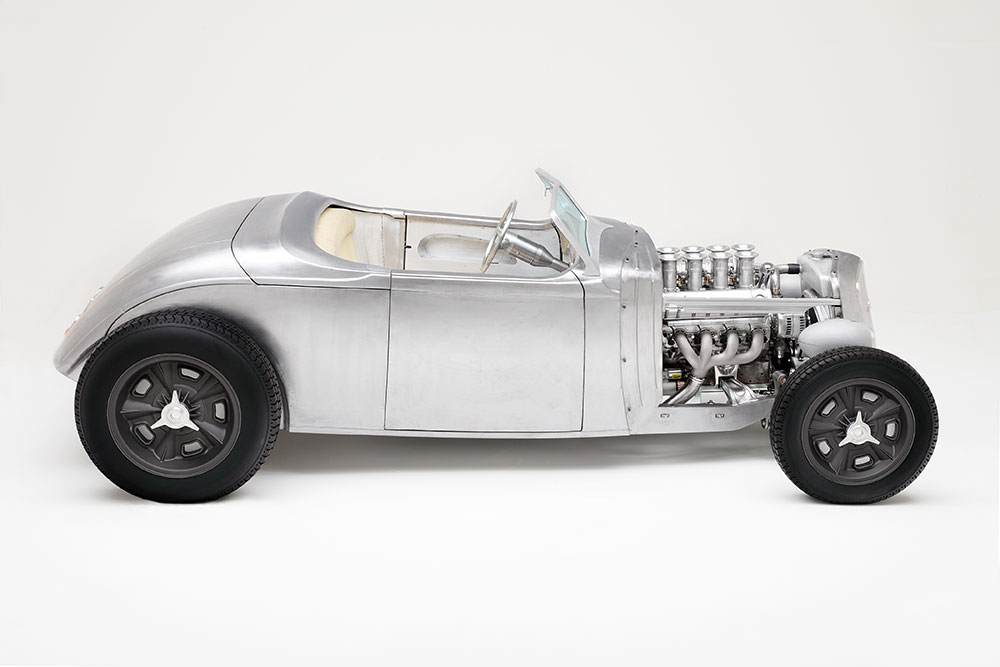 In future issues we will be covering the metalwork where we’ll enlist tinman supreme Ron Covell to walk us through the process. From here we’ll cajole our old shop teacher Ron Ceridono (he taught high school auto shop for many years) to look at exactly what was done to make this contemporary V8 look traditional—all the while maintaining the amazing performance that the LS engine is known for. 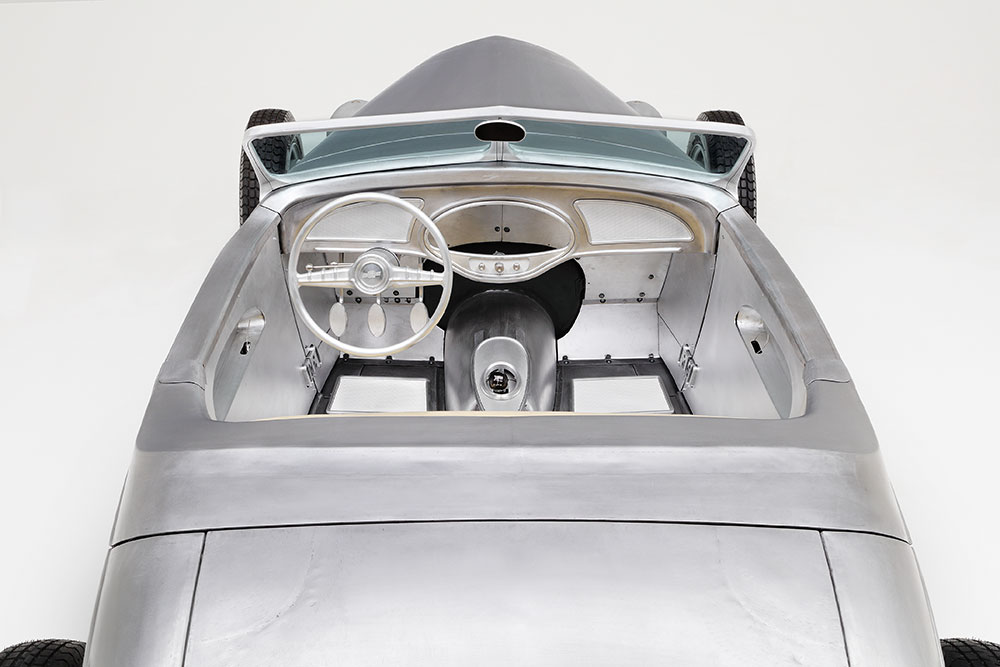 There will be a final feature to present our overall findings that meld into one good-looking roadster. In the meantime, here is a peek “before there was paint” to give you a feel for what it took to make this AMBR winner.

A quick background. Jeff is a lifelong GM guy, having owned all sorts of “General” hardware. Having always wanted to build a Chevy roadster he wasn’t aware at the time just how rare this 1934 is. After doing his homework he learned that Chevrolet had built approximately 3,000 roadsters, and only 31 at their Holden facility in Australia. Yep, what you are looking at is number 29 of 31 Holden-built Chevy roadsters. (Editor’s note: What wasn’t used of the original car, such as the chassis and powertrain, hang from the ceiling and walls of his mancave. Housed here as well are his other hot rods and collectible toys. —B.B.) 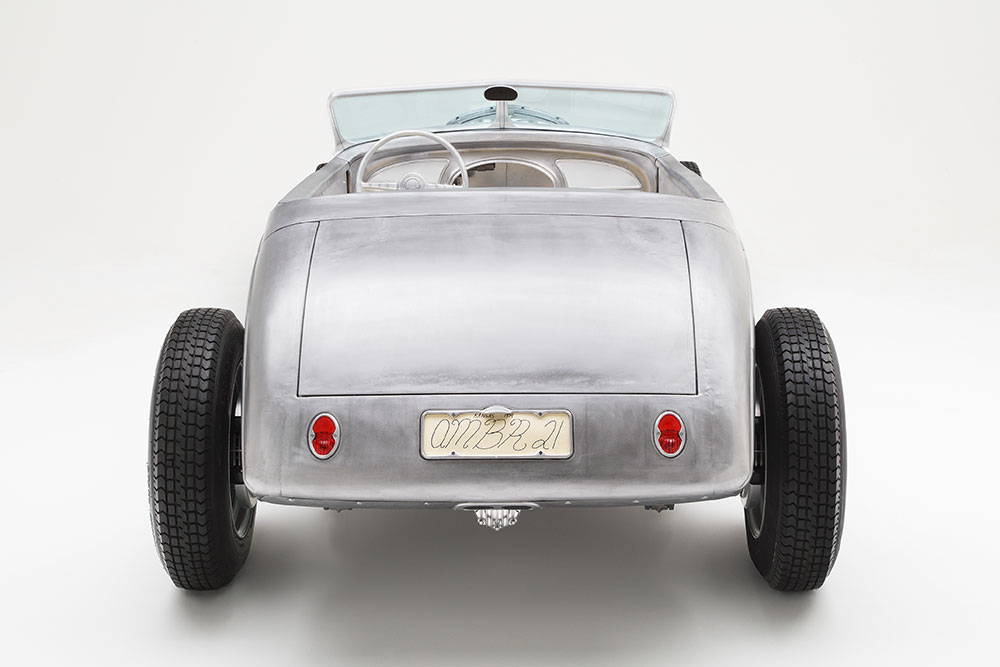 What we will see in this article is the handiwork of Roadster Shop, charged with building the custom chassis. For many the idea that Roadster Shop builds early Ford chassis may come as a bit of a surprise, although there is a clue in their name. However, their history and heritage are steeped in building 1929-48 Ford and Chevy chassis. Given their history and cutting-edge expertise, Jeff and Devlin looked to them to build a custom framework. Not just an early Chevy chassis but one that gave the appearance of a traditional hot rod, which included today’s cutting-edge technology, thereby allowing for modern-day performance in the world of ride and handling characteristics. 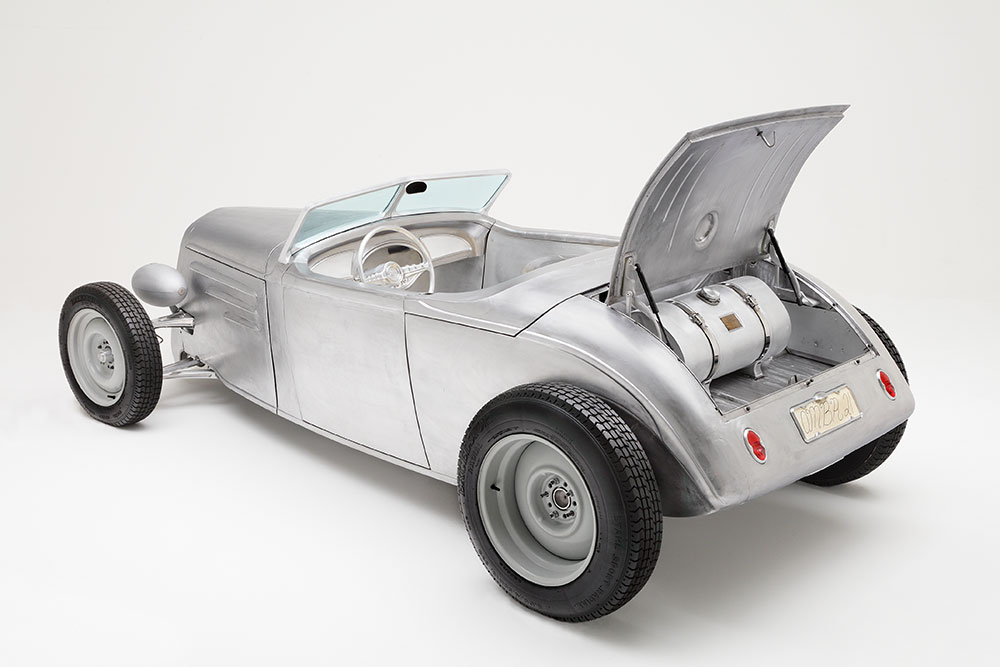 In speaking with Jeremy Gerber of Roadster Shop, he gave us an interesting quote, as we have heard similar words from some of the best builders in the country: “In my experience it is best to design parts that don’t make a statement by themselves, rather lend themselves together to make the entire car make a statement as a whole.” (We couldn’t agree more. No one aspect should “overpower” any other portion. That’s what truly makes for a good-looking and enduring build.) 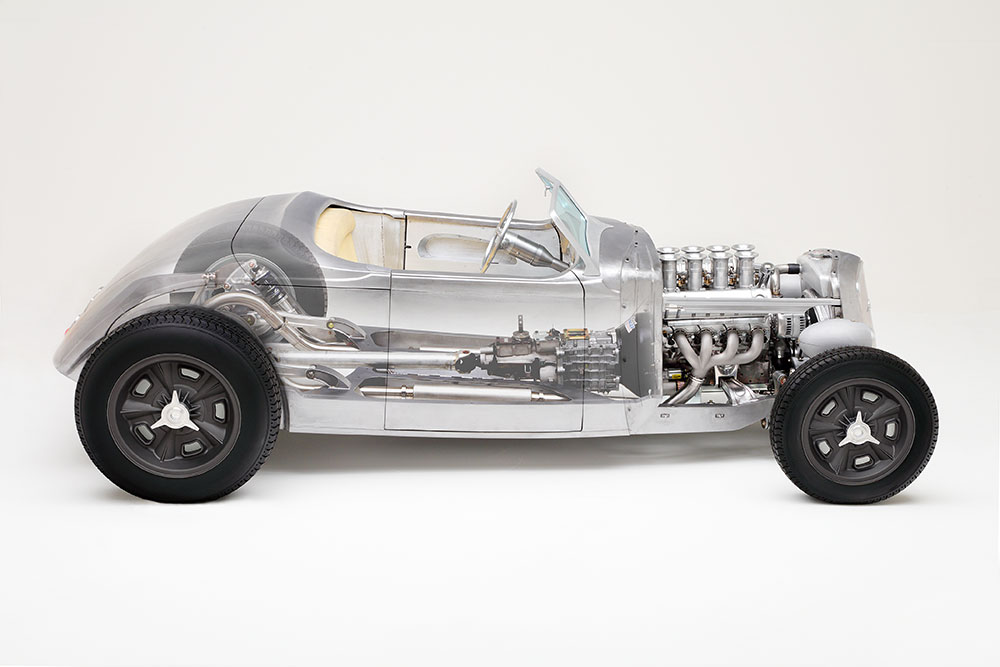 Roadster Shop came through with a custom chassis that features a unique one-off Independent Front Suspension. In back we see what traditional appearance warrants in the form of a Winter’s quick-change rear end. It is the steel tube and bell V8 quick-change rear end (8-7/8/3.78 ring-and-pinion) that was first dull nickel plated and then polished to a high sheen. According to Gerber, this was the most labor-intensive custom chassis ever attempted to date by them. 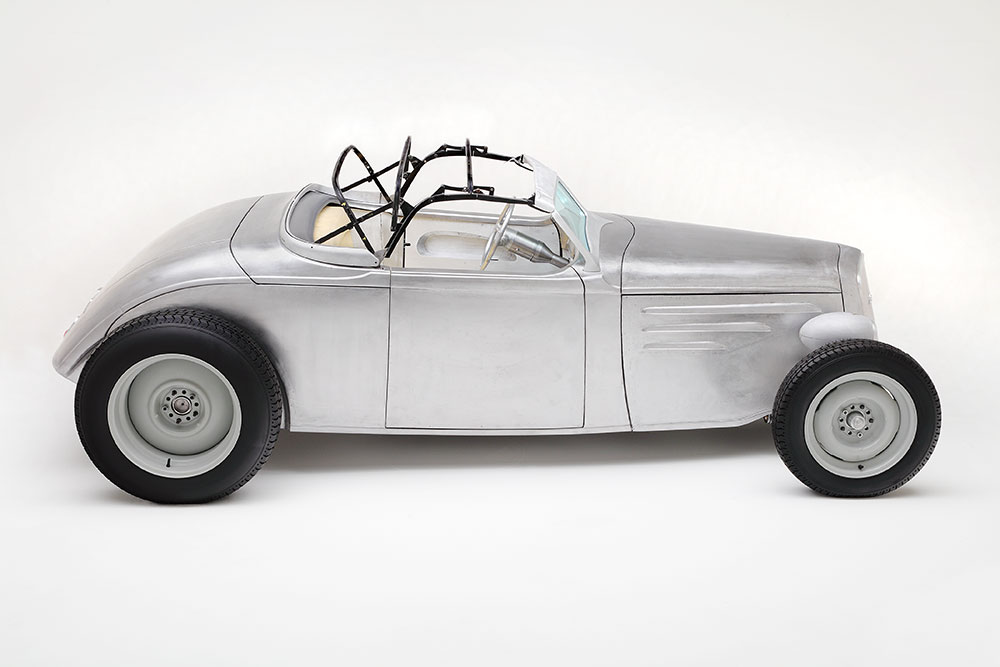 Other components used to make up the powertrain is a Bowler Performance Tremec TKO 5-speed transmission. In turn this links back to the quick-change that’s outfitted with a Wilwood brake system hidden behind custom backing plates front and rear. You will also see Cerakote-coated coilovers at the corners and what we can surmise as a “healthy collection” of ARP bolts used throughout the build. 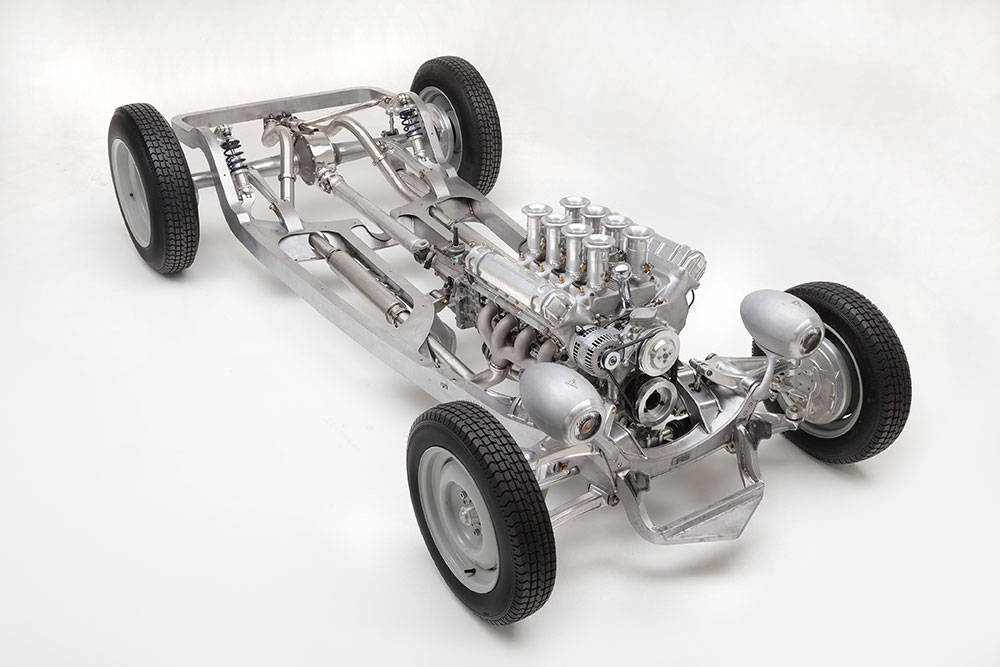 The roadster rolls on a set of custom one-off wheels that were designed and based off the old Indy Halibrand models. From here they were shot and opened for a cast finish. Next came the Tungsten Cerakote covering while the knockoffs are first dull nickel plated and then polished to a high sheen. The one-off wheels were then wrapped with Coker/Excelsior Sport Radial rubber, measuring 5.00R16 in front and 6.00/6.50R18 in back. 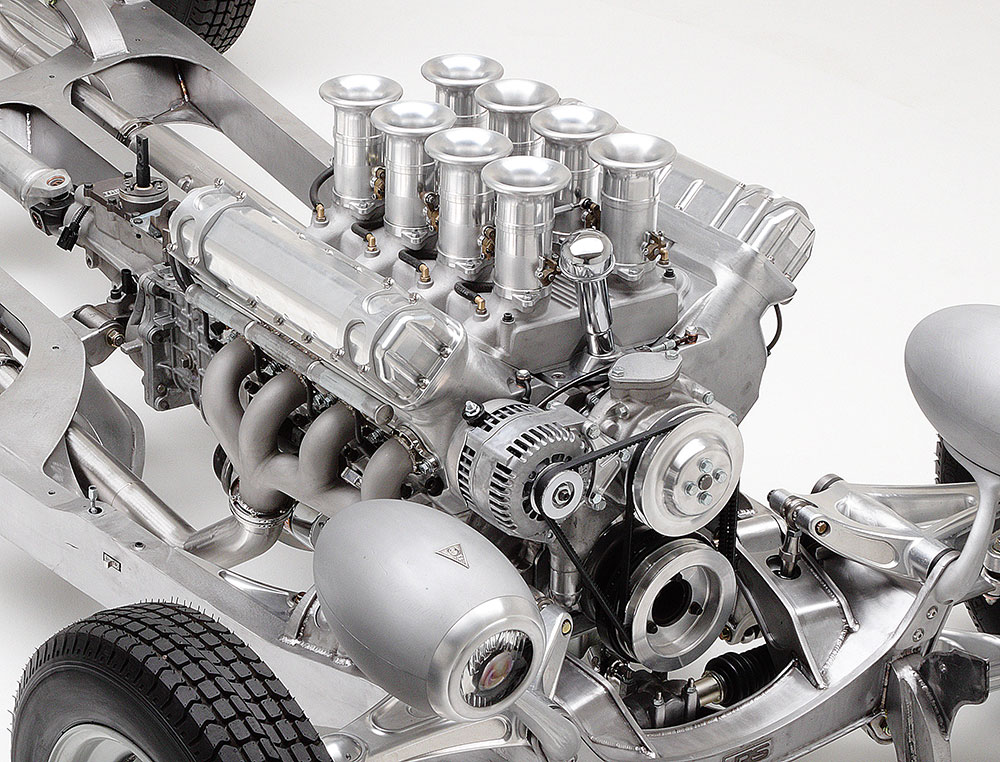 Dropped between the ’rails is today’s “go-to” V8 swap in the form of a Chevy LS engine. It was built by and at the hands of Keith and Jeff Dorton of Automotive Specialists Racing Engines out of North Carolina. However, before the thunderous 654 hp at 618 lb-ft of torque was developed there were a great deal of one-off parts to be made. 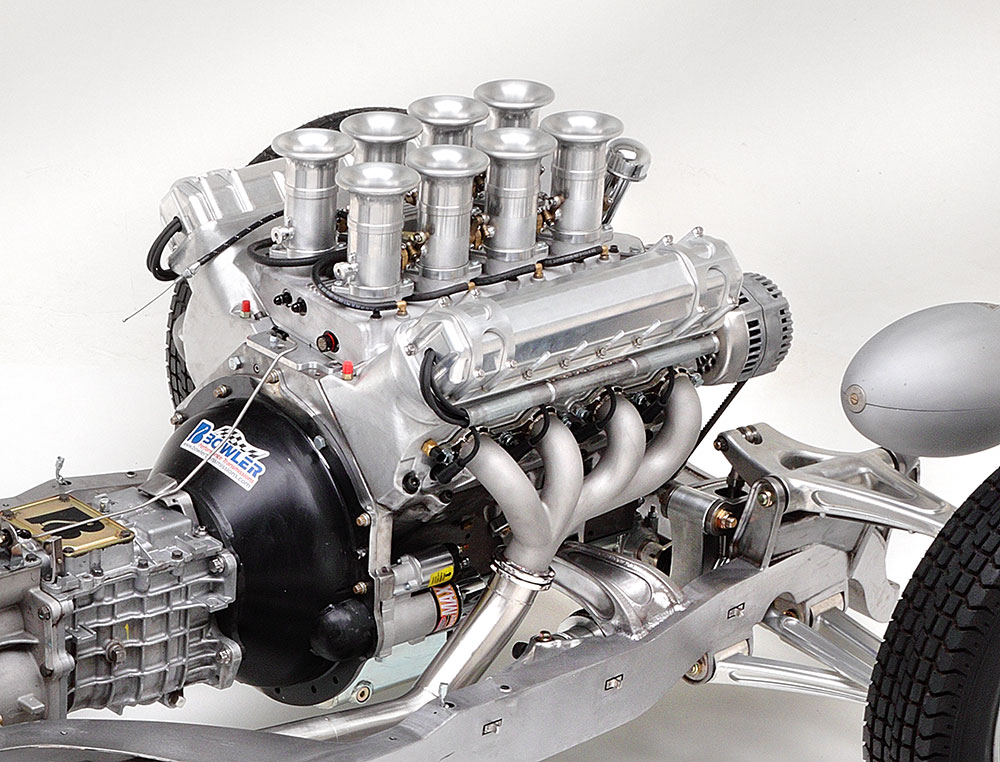 Once Alan Johnson of Johnson’s Hot Rod Shop in Alabama had the LS in his possession, he realized that anything that made the motor look like a contemporary LS had to be changed. The goal was to make use of today’s technology while wrapped up in a traditional-appearing V8. The LS cylinder heads, while some of the most efficient performance to come from a factory, were reworked. Not because more performance was needed, although there was a bit of that, but rather to make them look more like a traditional pair of Chevy small block heads. 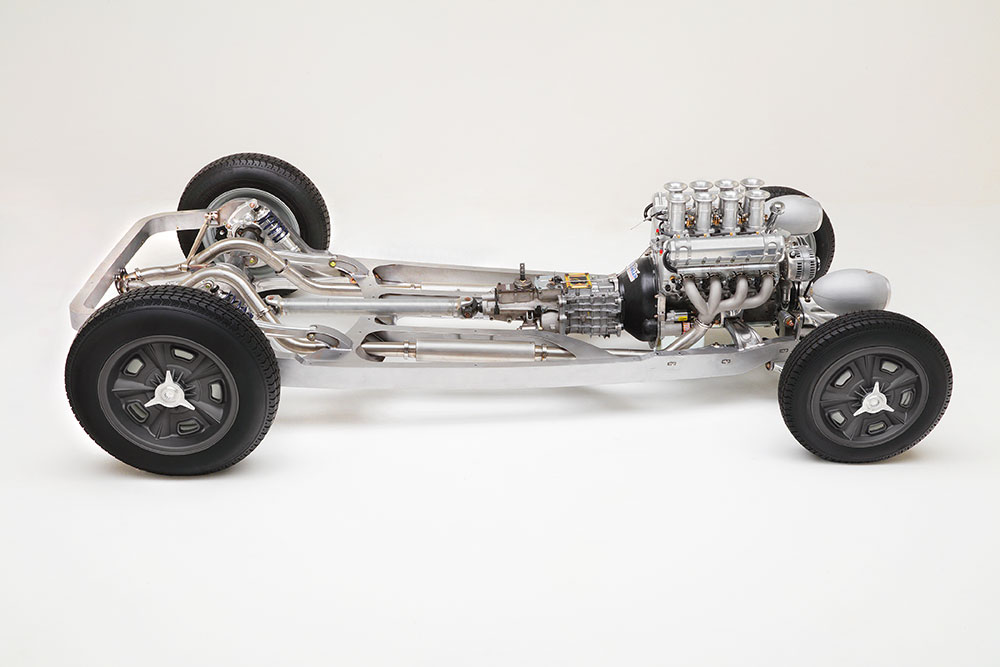 Something that should jump out to our hot rodder’s eye is the modern Chevy engine comes only one way, with a serpentine belt system. That wouldn’t cut it for this build. All the components had to be one-off designed and machined to fulfill the intention of looking like a traditional belt and pulley system. 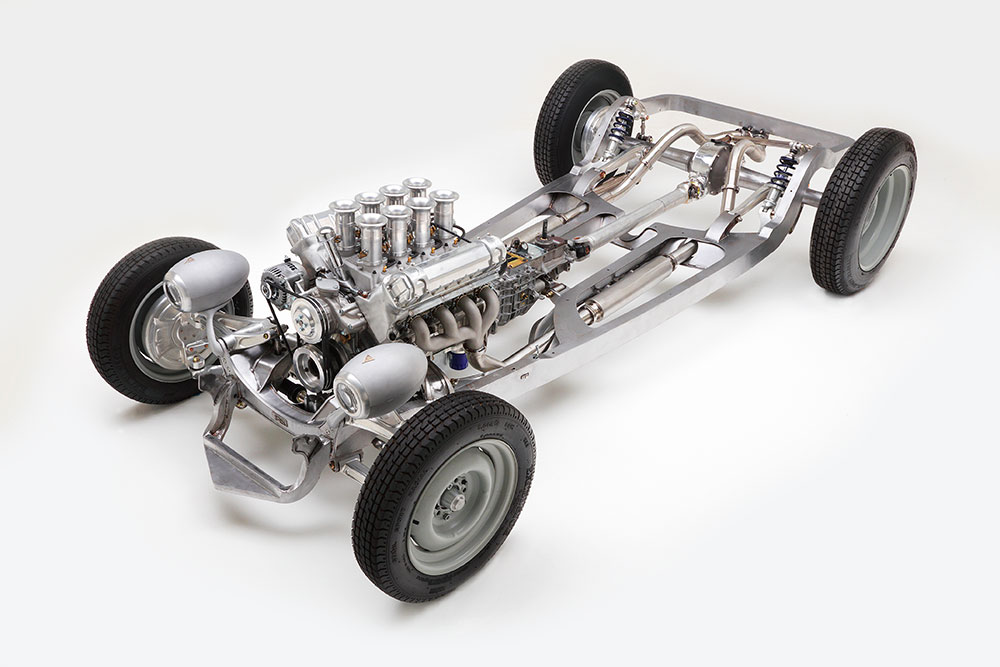 The valve covers are noteworthy. It was with intention that they were made to give the appearance of something that might have been on a ’30s-era Rolls-Royce. The LS coil packs are mounted to the top of the “real” valve covers while the period-appearing tops conceal the modern electronics. Even the heads were reshaped to make for a more-appealing look and function flowing into the faux valve covers. 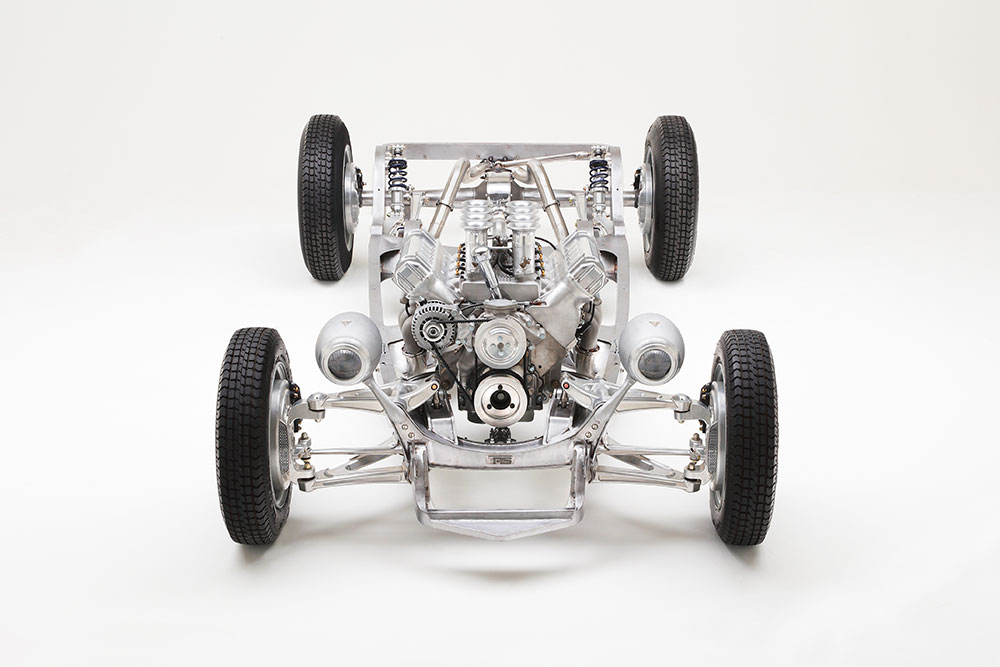 Removed from the engine and relocated are the idle air control motor and oil pressure sender. Now these two are mounted on top of the transmission under their own inspection cover beneath the shifter bezel. 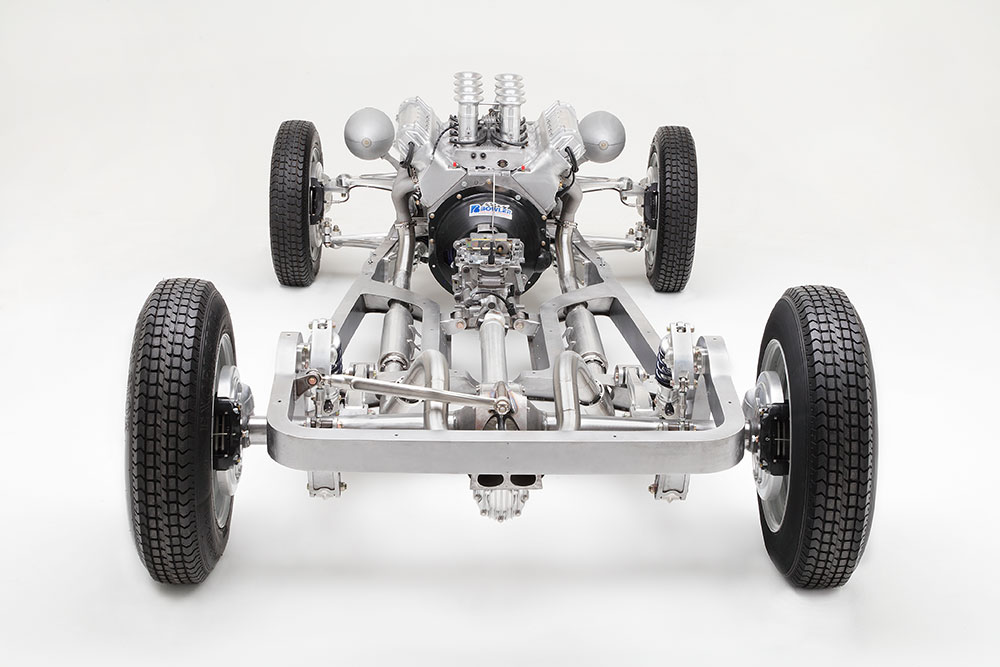 In time, after staring and wondering, you will realize the intake manifold while topped with an eight-stack injection hides the electronic fuel injection components. The intake is outfitted with FAST XFI ECU and, with a nice touch, traction control is also implemented in this build. 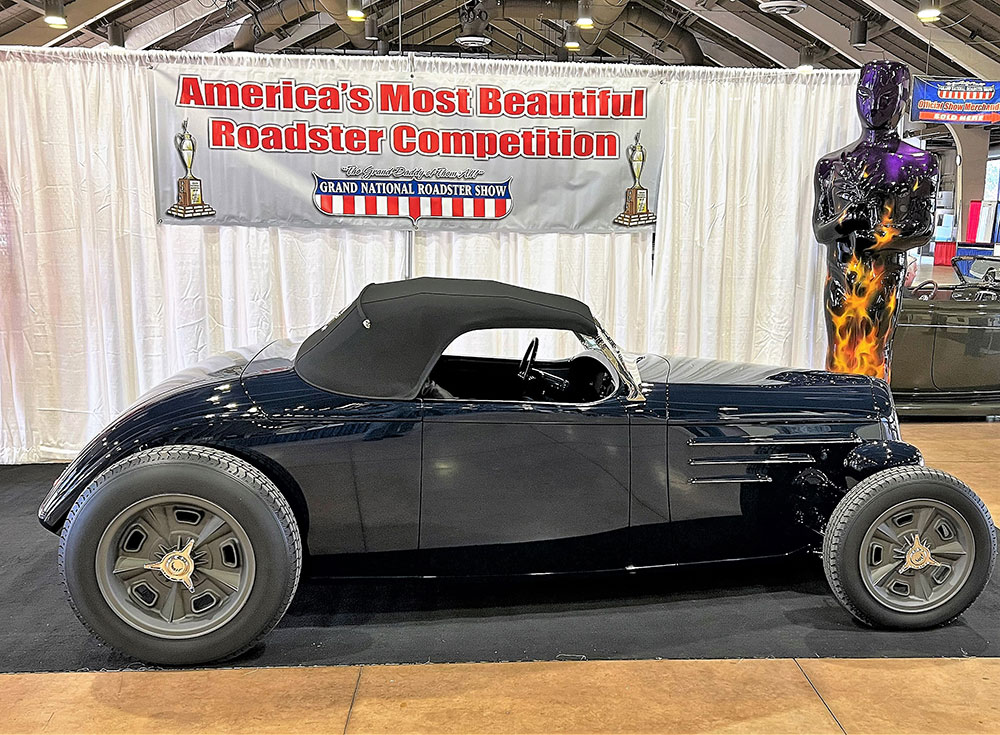 We haven’t given away all the secrets. In fact, we have barely touched the surface, but rest assured we will be showing more on the sheet metal, the folding and hidden top, the engine, and oh so much more on the 2022 AMBR. Congratulations to Jeff and Devlin for teaming up for this winning combination. MR