This Hemi Powered 1950 Plymouth Coupe is all Business 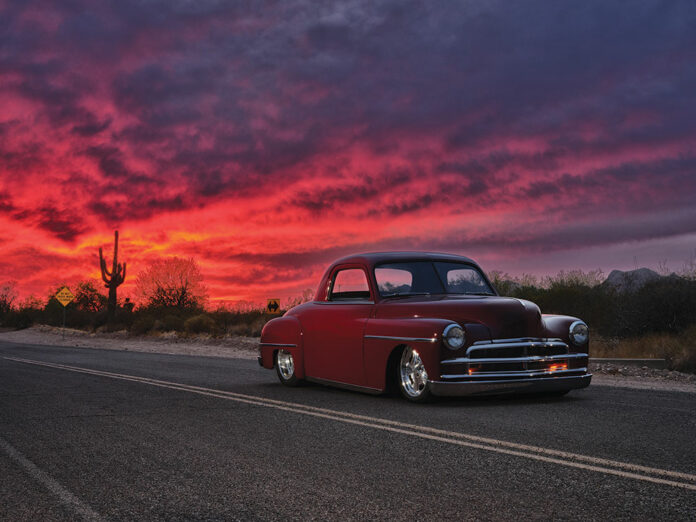 A ’50 Plymouth business coupe may not be the genesis of buildable hot rod material for most of us but it is for Brian Baker of Ohio. Turns out this business coupe was in his family (Uncle Robert “Bob” Burke) as far back as the ’60s when its driving days were cut short thanks to a stake bed truck using the coupe as a bumpstop. It would be repaired but not immediately. 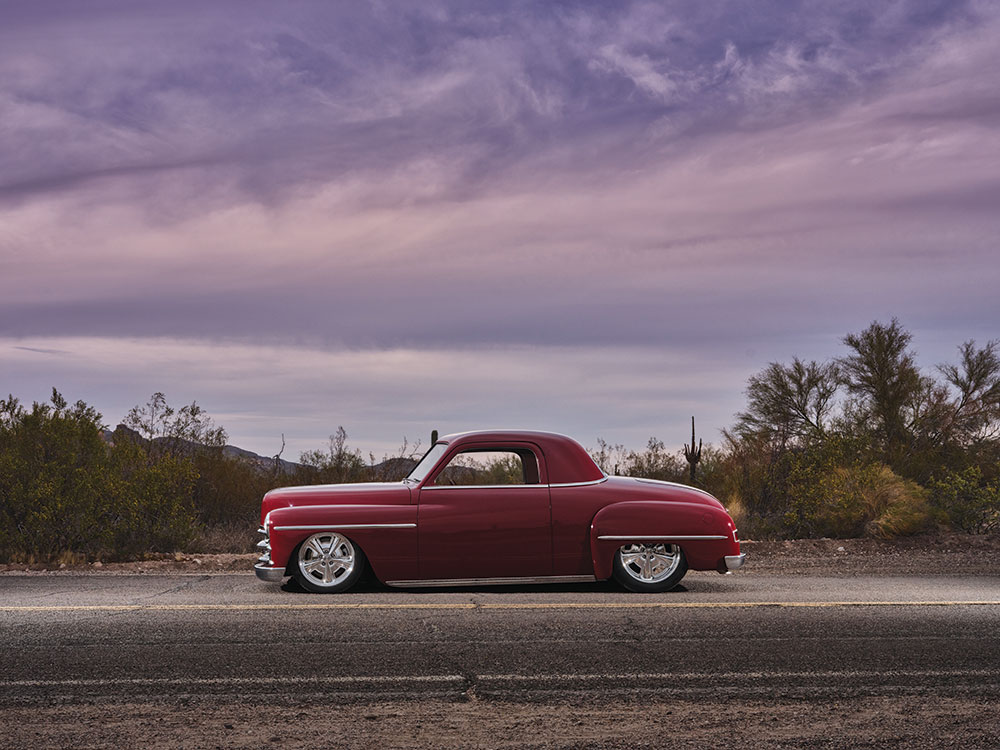 As it turns out Brian is no stranger to having built all makes and years of hot rods. Some of his builds have made it to the highest levels, with his ’29 Ford sports coupe appearing on the Feb. ’92 cover of Rod & Custom and a ’55 Chevy that was a finalist for Goodguys Custom Rod and Street Machine of the Year in 2006—the same year the car also made it to the Ridler competition. Additionally, both the ’29 Ford and the ’55 Chevy were invited to and shown at the Grand National Roadster Show. Brian learned his building skills the old fashion way–by starting at the ripe old age of 14 and helping his dad with his restorations that covered many a car.

The Plymouth Coupe eventually made it to Ohio where Brian, assisting his dad, grafted a new quarter-panel, fender, and truck lid, and painted it a deep blue (originally black), and the coupe was back on the road. It was driven for a while but then it was ushered back into hibernation until Brian brought it out about four years ago with the express intent of making it a driver through a quick refurbishing. Well, you can see how those plans were scrapped and what was to be a simple freshening up turned into a massive undertaking. It was his intention to keep the Plymouth Coupe all Mopar and drive it to Phoenix to show his now 92-year-old Uncle Bob what he had accomplished. And that’s what brings us to the build you see on the pages of Modern Rodding. 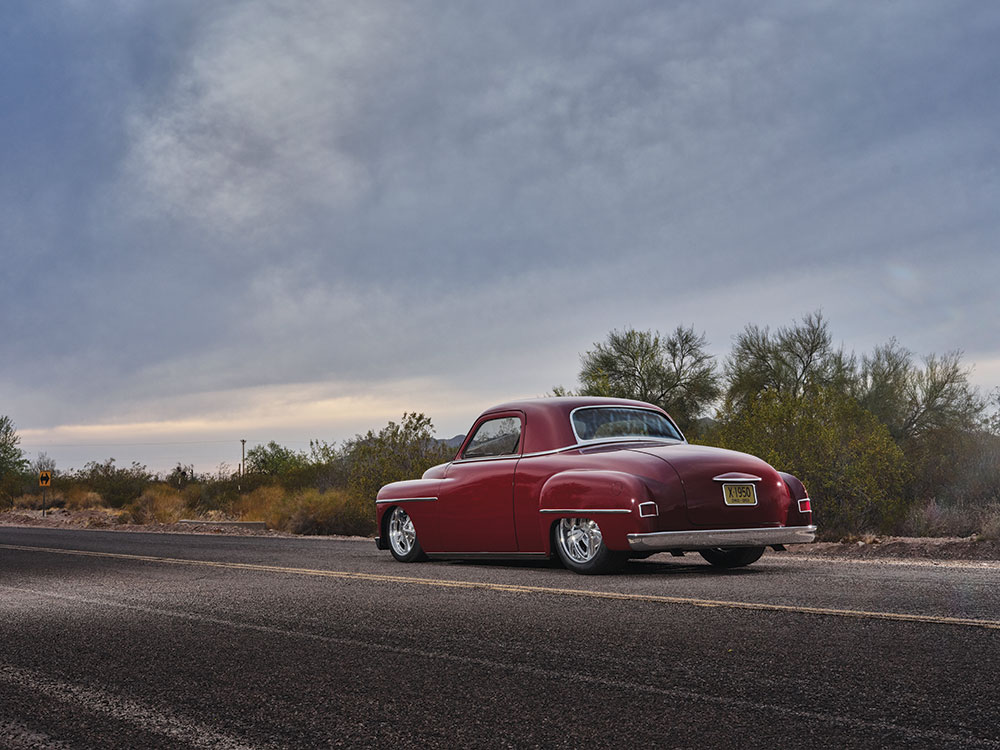 The fundamental mission of keeping the Mopar a Mopar was achieved by finding the proper donor car that would supply the suspension and drivetrain. Voilà, an ’07 Dodge Magnum appeared and it provided the necessary components. To Brian the basic lines of the coupe were sufficient but there were some things that needed a “rethink” to make the ’50s-era basic transportation something more—something more like a hot rod. He began by removing the hood ornaments and fabricated new aluminum hood trim. Additional front-end work was achieved in the guise of the front bumper turned upside down, narrowed, a peak was added, and it was tucked in closer to the body. From here he fabricated a less-visible bumper-to-body panel filler. This all helped the visuals by yielding a more smooth and rounded shape. Next, the turn signals were eliminated and LED replacement lights were added. They are mounted inside the grille and reflect down onto the polished grille bar, and according to Brian “They work great.” 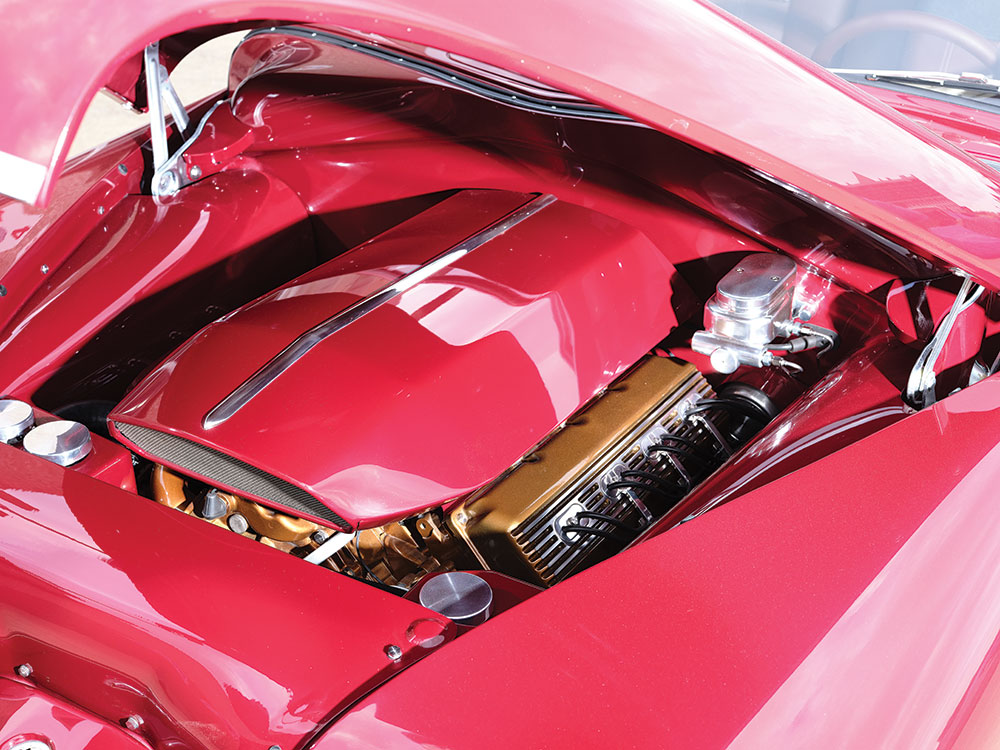 In back Brian flipped and narrowed the bumper and fabricated a smaller filler panel. The original trunklid had an OE die-cast and chromed emblem now removed and he made a smaller polished aluminum trim piece. The rear sheetmetal also features more of his handiwork in the way of a more streamlined piece of sheetmetal that was home fabricated, painted body color, and a small polished aluminum trim piece was added. This serves as the home for the new milled aluminum taillight bezels with a fresh pair of lenses all shaped to match the fender contour.

Much of the original stainless trim, including the grille, was saved (straightened and polished) by longtime friend Loren Bowers. The chromework throughout (bumpers and so on) fell to Advanced Plating. Additional appearance items originally intended to enhance the car’s appearance were now scheduled for removal. They included the vent wings and the shaving of the door handles. There was some minor rust repairs, a new trans and driveshaft tunnel and trunk floor was on the fabrication and replacement agenda before the final sheetmetal work could take place. Once the lengthily list of modifications was handled the bodywork and the painting was next, and this was addressed by Brian. He looked to PPG for a custom mix that’s a basecoat/clearcoat titled Vintage Maroon. 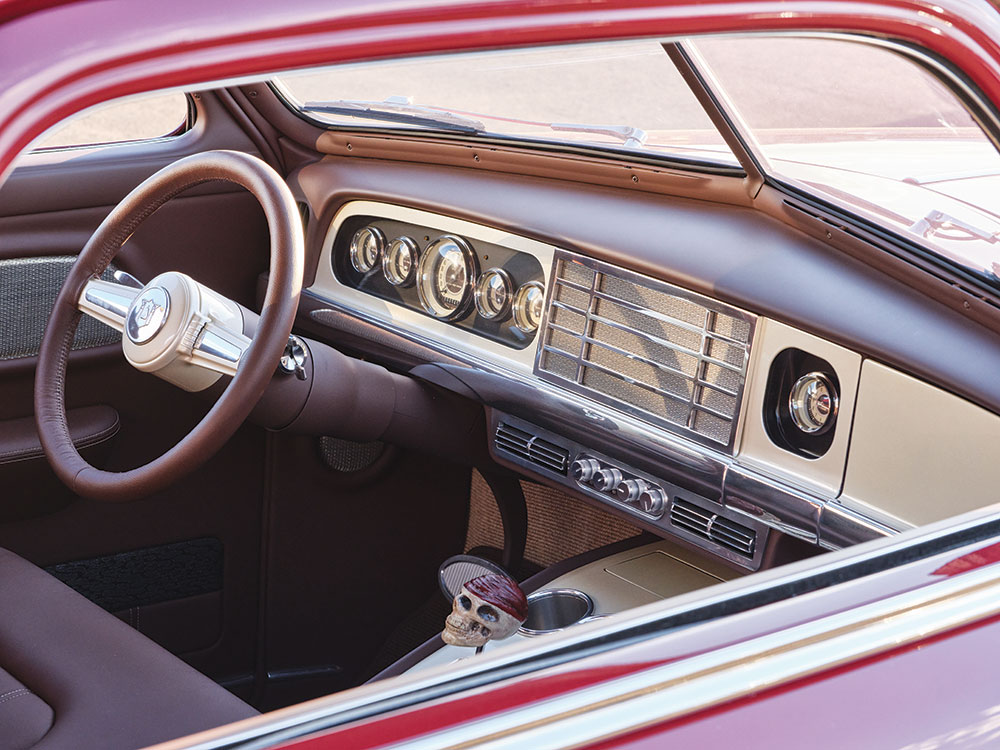 While the chassis can be a daunting task on any build, Brian was going to take a different, but not unheard of, approach. The mantra for this build was: “Keep it Mopar.” In order to do this, he settled in on finding a donor car that would supply his needs–full suspension and powertrain. Turns out that an ’07 Dodge Magnum became “available” and he was able to fit the engine easily enough, as a new firewall, inner fenders, core support, and requisite motor and trans mounts were fabricated. Part of the secret of getting the engine to fit was to remove the coils from the valve covers, which is where the Sullivan Performance valve covers came into play. Once this was accomplished the 5.7L engine took on a vintage Hemi look. The coils, along with the Taylor primary wires, were relocated against the firewall behind the inner fenders. Both the engine and trans were painted in dark gold (early Hemi colors) and the engine was dressed with an intake cover with additional trim similar to the hood. Additional engine items include the Vintage Air system along with their 16-inch electric fans attached to a Speedway Motors radiator. Also, HotWire Auto, specialists in modern modular Hemis, supplied the custom engine wiring harness. Supplying the juice is an Optima RedTop battery relocated behind the seat where the fuse panel and other electrical components are positioned. The 340hp Hemi V8 also dons a pair of JBA headers with 1.626-inch primary tubes that feed the spent gases through a pair of 3-inch stainless and mandrel-bent pipes coupled to a pair of Dynomax mufflers, all fabricated by Brian. The modular Hemi is linked to a Dodge NAG-1 five-speed automatic transmission (as it would be in its factory configuration). This transmission is known for being a beast and can handle stout street motors with torque readings above 420 lb-ft. The shifter is the stocker from the ’07 Magnum donor car.

The front suspension required a great deal of owner mods that include the front spring pockets enlarged for airbags, the A-arms narrowed, the use of Fatman drop spindles, and modified to accept airbags. The steering comes by way of a Cavalier power rack linked to an early GM steering column. The front and rear brakes are Dodge Magnum with the fronts adapted to stock spindles by Brian. 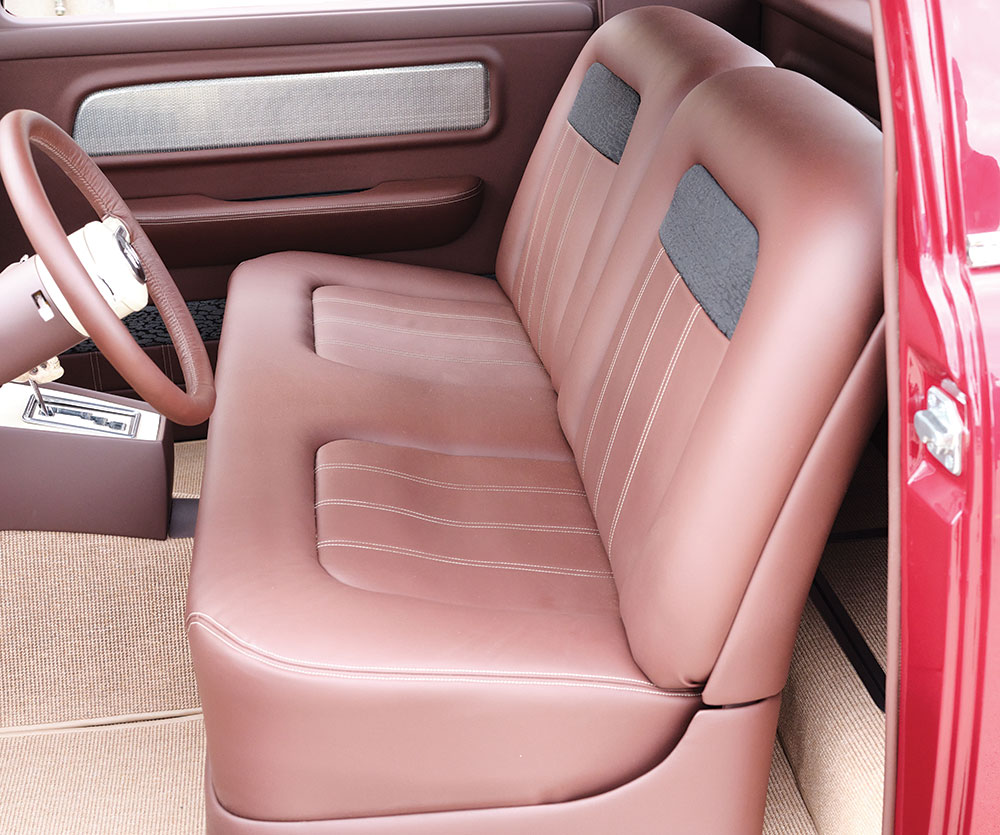 The rear suspension, again ’07 Dodge Magnum Independent Rear Suspension, did take a bit of noodling to make it fit and work under the ’50 Plymouth business coupe. Because of the wheel and tire combination–one-off wheels from U.S. Mags that measure 18×7 and 20×10 and shod with Continental rubber measuring 215/45R18 and 275/45R20–were used. The Magnum rear end package was narrowed 9 inches and the driveshaft was shortened 8 inches. The factory carriage Independent Rear Suspension (with 2.82 gear ratio) design was retained and the Plymouth Coupe frame was modified to allow for clearance for the lower stance and mounting brackets for the airbag rear suspension. The rear axle shafts were modified to work by Brian’s late friend Bill Metz of Bills Rod & Custom as he recut and splined the shafts.

Inside one can see any number of owner modifications, including the machined pedals and assemblies. The throttle is a drive-by-wire unit derived from the ’07 Dodge Magnum that Brian then fabricated a sheetmetal cover that went over the factory plastic assembly. Looking more closely we see that the upper portion of the dash is stock but the lower portion and the aluminum trim are all “at home” items. To this the Vintage Air AC controls are placed in the lower portion along with two of the air registers normally found in a Chevy truck and a pair of upper air registers “borrowed” from a Honda Pilot. The gauge panel houses Classic Instruments Nostalgia VT five-pack of gauges (plus clock) behind a glass-covered panel. Note the center console was fabricated to hold the electronic shifter with a handcrafted skull knob by Brian’s uncle, Tom Burke, an accomplished woodworker, and today’s obligatory cup holders, USB ports, and 12V power plug. (Ah, the accoutrements of modern-day life!) The steering column is a late-model GM tilt unit with an owner-fabricated wheel that’s adorned with the original ’50 Plymouth horn button. Mentioned earlier was the HotWire Auto ECU, along with this is the American Autowire wiring system that was owner positioned. Further looking around the interior you will spot the owner-fabricated hard shell aluminum headliner that is comprised of 0.125-inch foam with vinyl covering. The bench seat is owner modified and then covered in Mink-colored vinyl plus Black Cloud inserts (similar to what would be seen in a ’57 Chevy) along with tan square-weave carpeting all by Andy Ryder of Ryder Custom Upholstery. 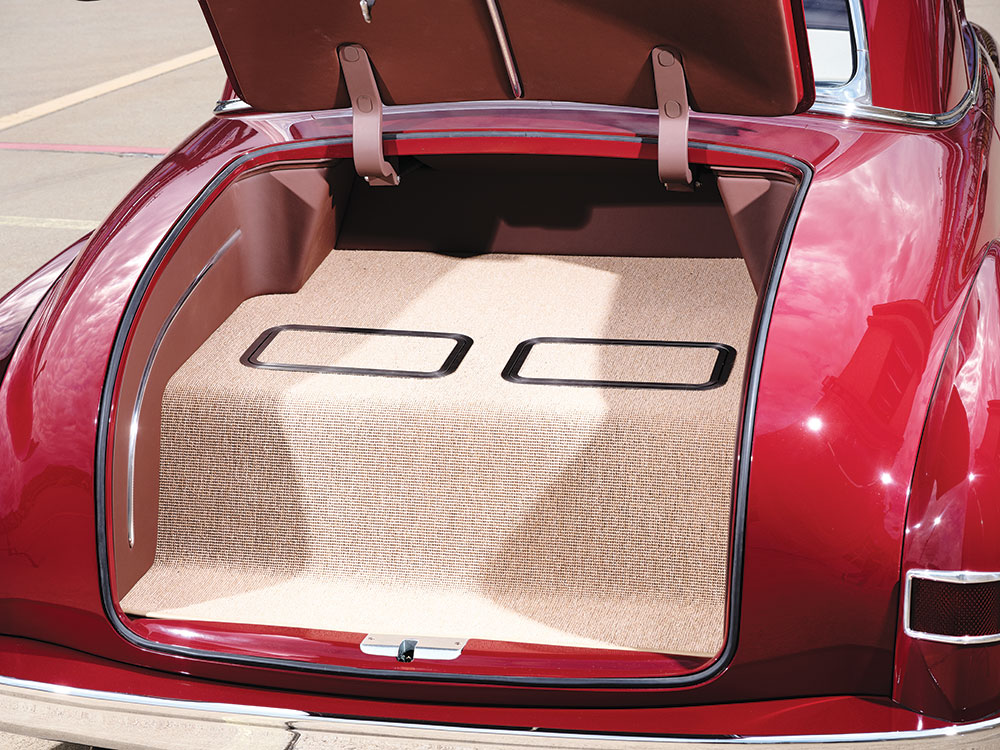 Is it just us who may think this is an amazing hot rod? Not hardly. As of this writing this ’50 Plymouth coupe has taken home Goodguys Finalist Custom Rod of the Year at Ft. Worth, Texas, Builders Top 10 at Scottsdale by All Ways Hot Rods, Builders Choice Top 10 by Goolsby Customs, and a Classic Instruments Pro’s Pick at the NSRA Street Rod Nationals. MR