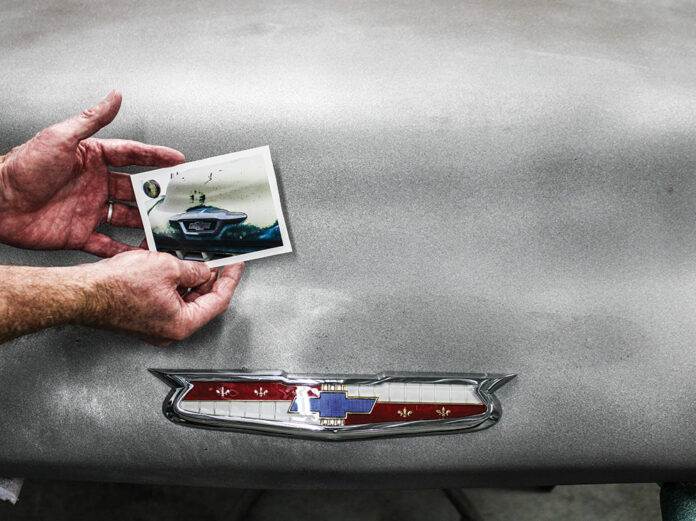 Here in our Montana-based shop we’re still workin’ on the same second-series ’55 Chevrolet. You know the big ol’ heavy badges those old trucks wear on their fender sides and hood? We have all three in original pitted condition. In our Brothers Trucks catalog we’ve noticed some beautiful reproductions, but since pluggin’ holes is easily done we’ve opted to delete all three badges in favor of a smoother look.

The project truck is not meant to be a smoothie, as its exterior will retain a few stock-type hiccups. For example, from the aforementioned catalog we’re about to place an order, which will include shiny-new reproduction door handles. Back to big badges; we’re thinkin’ the fenders will look great without, but what about the void at the front of the hood? There might still be room for something smaller there.

As the truck’s construction continues, we’re wondering how close the contours of a ’55  Chevy hood emblem might match those of the old truck’s hood. Being pretty familiar with curvaceous Chevys, we’re thinkin’ that might be a fit. We know that Danchuk reproduces that emblem, but we’re not so keen on ordering one just to find out if it’ll really work—or not. Long story short, and quite accidentally, we’ve found what we need.

Back in California, while setting up for our first big “Wrecking Yardsale,” a weathered ’55 Chevy hood emblem emerged from some pile of ol’ parts! From there it went straight into Samsonite for the road trip home where fitment suspicions have since been confirmed.

As it turns out, the Danchuk reproduction emblem of desire is also stocked by Summit Racing, whose number we know by heart. It’s time to place another order anyway. Along with other items (body shop staples) from Summit Racing, let’s have a Danchuk 371 as well.