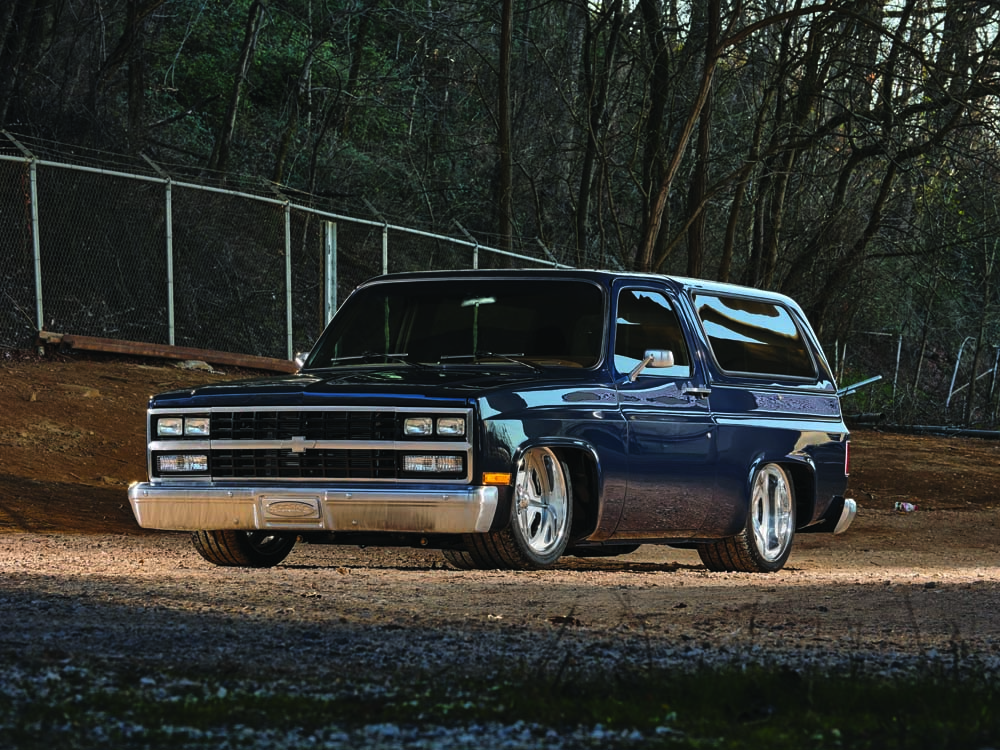 Following the four-wheel-drive debut of the K5 Blazer in 1969, GM’s initial foray into the two-door SUV market, Chevrolet introduced the first of its two-wheel-drive models in 1970. What began as a response to rival the International Harvester Scout with what GM described as a “shortened pickup with luxury-like accommodations” (such as A/C and non-utilitarian interior features) ultimately launched the 2WD SUV segment we now know today. As of late, the first two generations of Chevy Blazers & GMC Jimmy are hotter than ever—in both on and off-road applications!

Check Out: Charlie Simpson’s Homebuilt 1957 Chevy 3100 Stepside is All About Detail

But there seems to be two distinct Chevy Blazer crowds when it comes to the 1969-1972 and the later Square body era 1973-1991 models. To be honest, we love them both—in all forms and styles! When we heard that Scott’s Hotrods owner Justin Padfield was building a second-gen 1982 k5 blazer for himself to showcase not only his company’s applicable components but their ability to build top-notch classics, we knew something special was in the works. And as John Jackson’s images clearly attest, we weren’t wrong … not by a long shot! 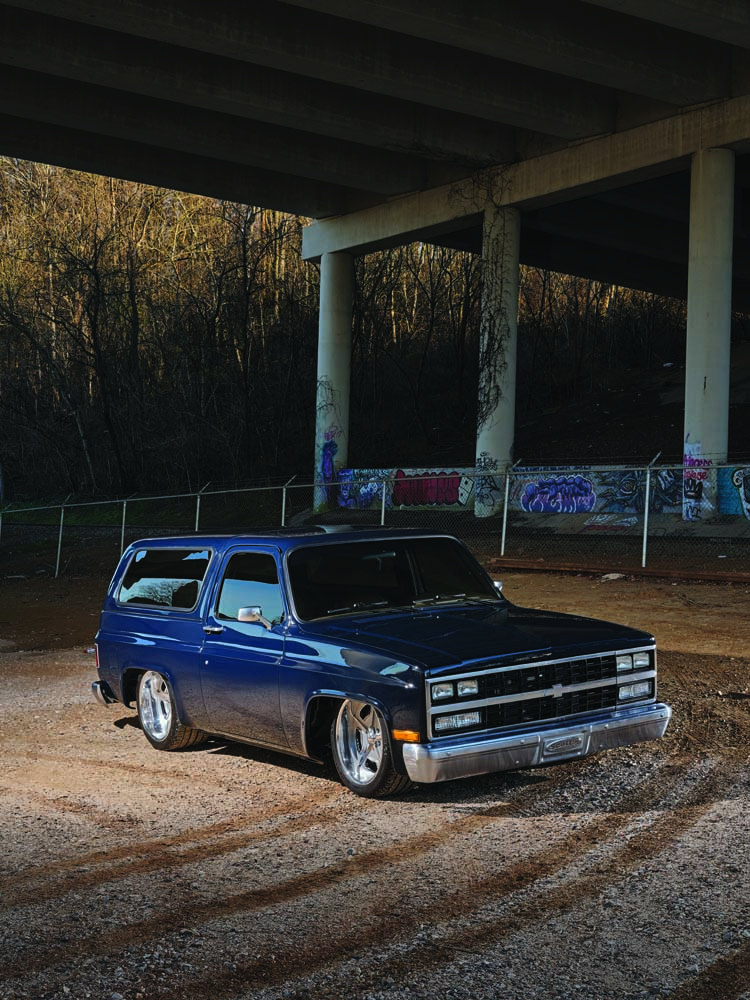 We asked Camren Beatty, marketing manager for Scott’s Hotrods, to fill us in on exactly why they chose to build this particular year/model Blazer:

“We [Scott’s Hotrods] built this 1982 K5 Blazer 2wd for a few reasons. The first reason is because we really like this body style of Blazer; we think it’s one of the best. Secondly, while we manufacture chassis and suspension kits for any vehicle (1925-1987), we are known for specializing in C10 trucks. More specifically, the Blazer was built to showcase Scott’s bolt-on coilover IFS and weld-on four-bar rear suspension kits for the 1973-1987 Square Bodies. Therefore, we plan to drive the Blazer to as many car shows across the country as possible just to prove its roadworthiness and disprove it’s nothing more than just a trailer queen. We will use this Blazer to take customers on rides to show them how much our suspension is compared to stock or even upgraded/modified stock suspension kits.” To the general public, high-end suspension kits as such might pose a sticker-price shock on the surface—especially when you factor in the adjustability aspects. But once you get the opportunity to really experience the overall ride, handling capabilities, comfort, and control capabilities, it’s then you realize that investment might be one of the best you could ever make in your classic truck.

Check Out: More on Justin’s K5 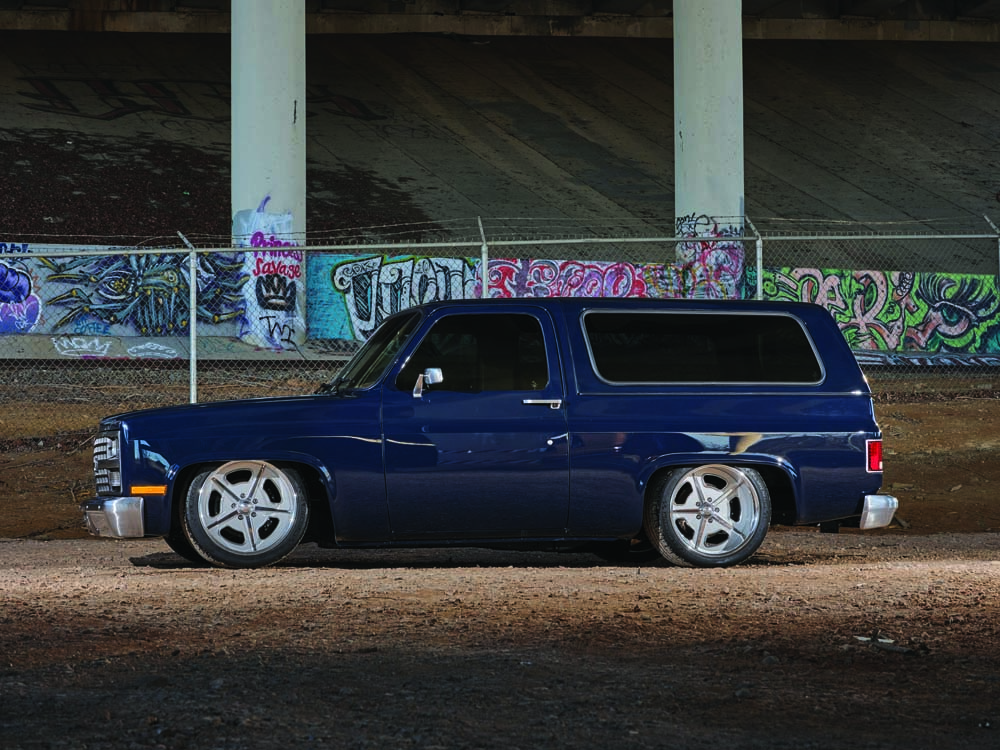 “We purchased the Blazer and had the owner drive it to our shop for delivery; it had a BBC out of a 1985 C20. The original rebuild was done in the mid ’90s: Turbo 400, highway-geared rearend, with horribly dated pinstriping and completely stock (clean) interior. We installed our bolt-on coilover IFS first and then drove it around a bit (NSRA Louisville and Cruisin’ the Coast from our shop in Tennessee). Then installed our four-bar rear suspension and drove it out to Scottsdale Goodguys through an ice storm in Oklahoma. Once we got back, that’s when we started the complete rebuild. It snowballed into what we have now, and we absolutely love it.  We’re still working out a few bugs, like most project builds, and we’ll be driving it all over the country to car shows to showcase the products we manufacture.”

Check Out: In the Shop: Goolsby Customs 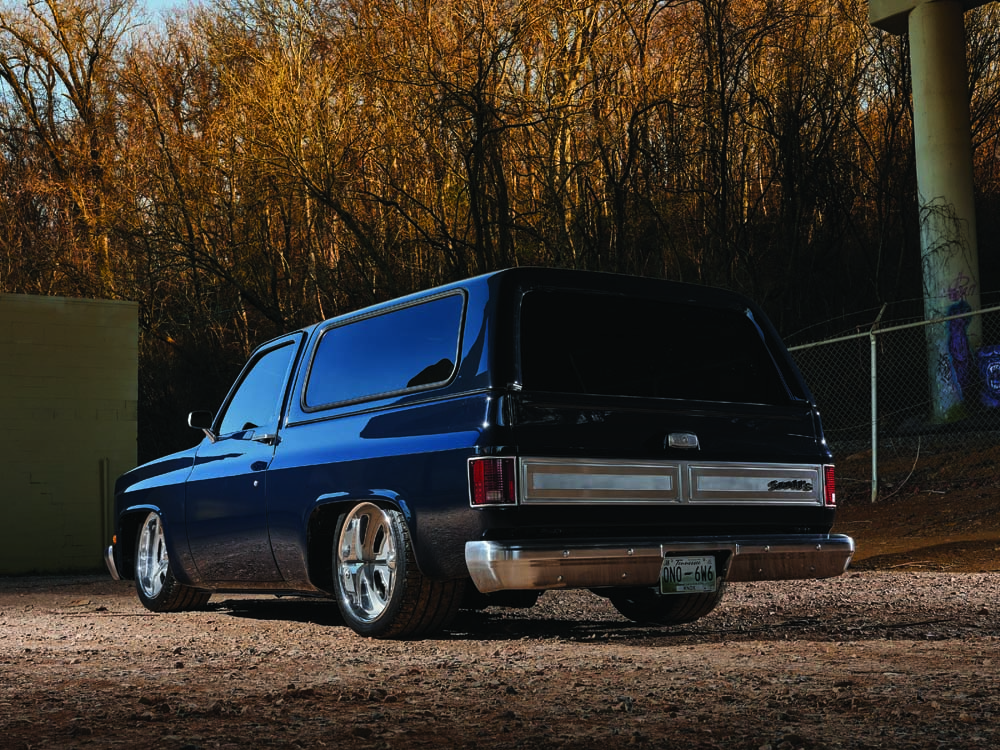 As for some of the Blazer’s finer points, Beatty continued: “Kevin Riffey’s Hotrods helped us out when we were in a bind and repainted the Blazer (mid-’90s Dodge Truck Dark Blue) after we experienced some major issues with the initial paint- and bodywork. Steve Holcomb Pro Auto Interiors did a beautiful job on the leather custom interior—from the dash (outfitted with Dakota Digital gauges, Vintage Air A/C, and so on) to the bucket seats to the custom subwoofer/amp enclosure. We replaced the big-block with a Billet Specialties Tru Trac–equipped Karl Kustom 525ci LS3/4L75E Connect & Cruise. Wheels are 20-inch Hot Rods By Boyd Centennials (with Michelin low-profile radials). Advanced Plating handled the brushed and satin chrome on many parts, including the bumpers, custom CNC tailgate panel, Sparc Industries steering wheel (on an ididit column), door handles, and even our proprietary Scott’s Square body custom interior door handles, billet brake/gas pedals, LS valve/coil covers, grille, and more.” 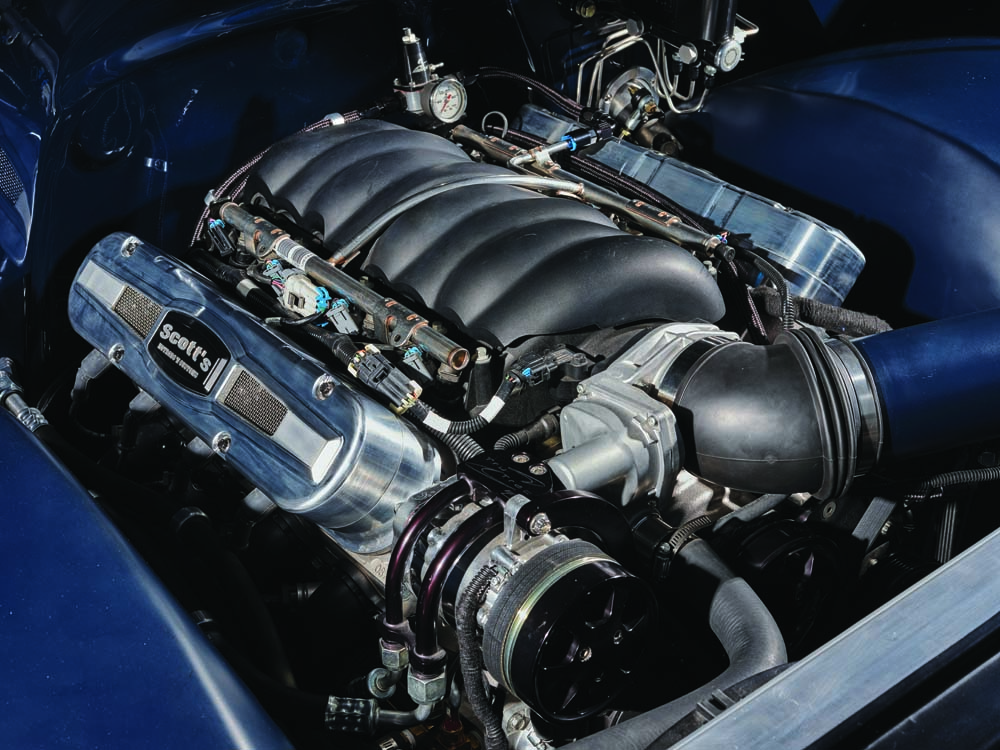 Having seen the Blazer in person at the 10th Annual Dino’s Git Down this past November, we can fully attest to the Blazer’s good looks and definitive styling … however, we are still waiting on that first ride-along, Justin!