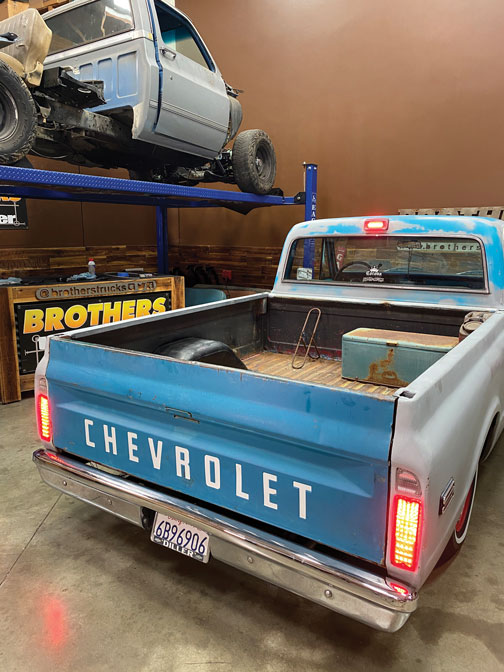 Believe it or not, LED (light-emitting diode) taillights have actually been around since the early ’90s. Oddly enough, it wasn’t until the early ’00s that LED headlights began replacing the popular HID (high-intensity discharge), which had started to replace the age-old Halogen sealed beams around the same time the LED tail lights came around.

Today, LED lighting is so prevalent there’s absolutely no reason for any vehicle—no matter the age—should NOT have LED lighting, including the old trucks we drive. Besides their obvious greatly improved illumination, LED lights use less power than standard incandescent bulbs, plus they produce much less heat and are resistant to vibration (no socket contact), which means the diodes can be mounted closer (sometimes even integrated into) to the lens in which they’re being illuminated through.

Obviously, however, some people feel that LED lights in their nature distract from the non-modern look of vintage cars and trucks, which is a valid point. Fortunately, companies like Brothers Trucks now offers LED headlight and taillight conversions that don’t make your truck look like it just came off the set of TRON, yet not only illuminate the road substantially better for you, they make your truck substantially more visible to others. That’s a double win, and something your old T3s and 1157s can and will never do!

For 1967-1972 C10 owners with factory cargo lights, Brothers also offers a LED third brake light conversion. Combined with their LED taillights, this addition will light up the back side of your C10 like never before. Now, while the taillights are a direct bolt-in (no wiring modifications), the led third brake light kit does require some additional wiring (you must tap into the brake light switch in order to provide the signal when braking) and minor cargo light housing modification (drilling a small hole to pass wiring through). Less than a half-day’s work with basic hand/wiring tools is all it takes—well worth it for the resulting benefits, as we’ll show you here.