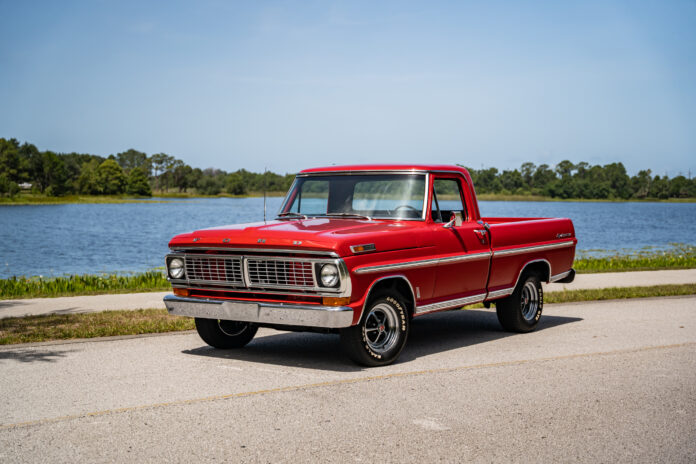 This F100 is a Prize—in More Ways Than One

By the Classic Truck Performance Staff 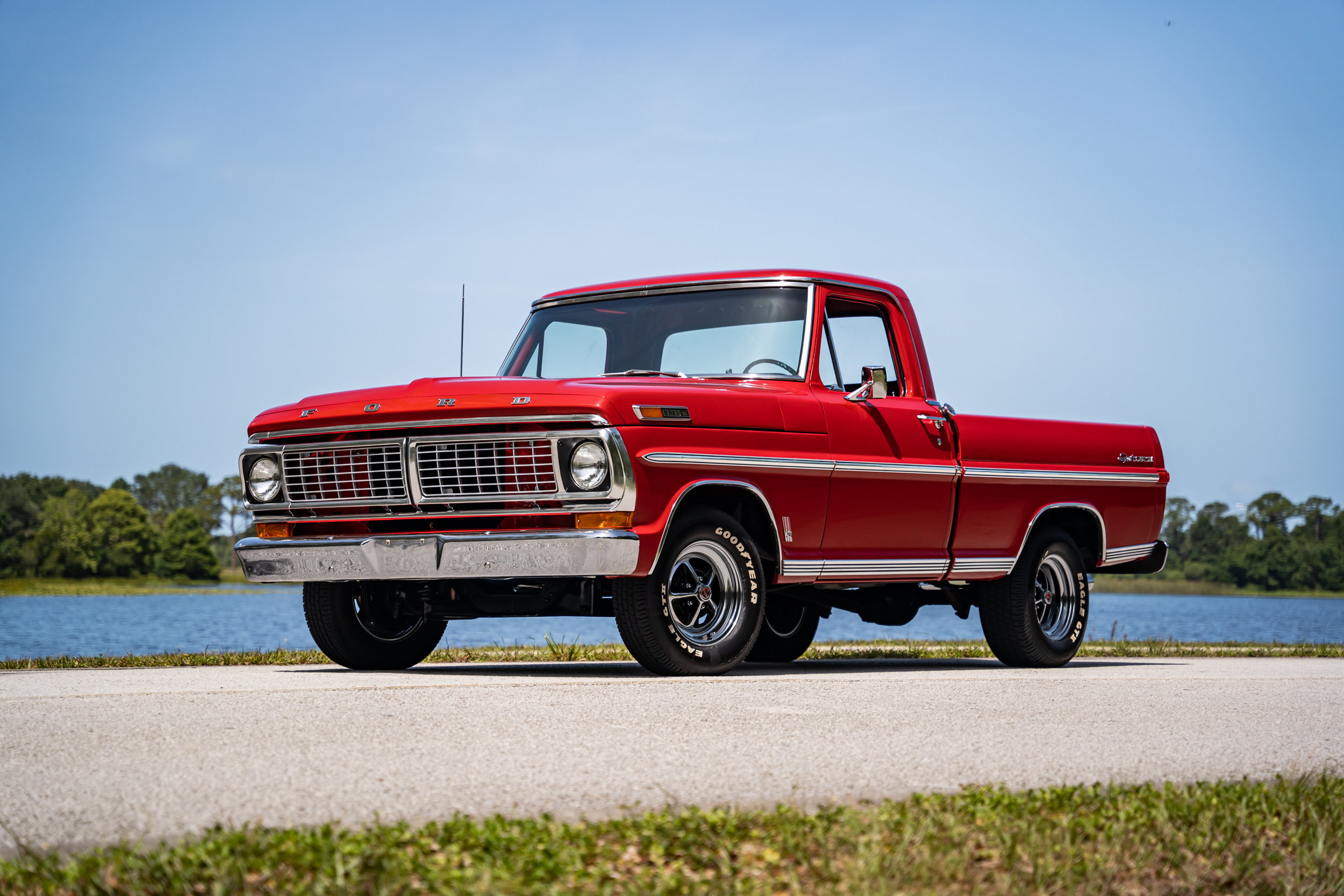 David Dry, of D&D Automotive Services in Locust, North Carolina, found this truck as an abandoned restoration project and turned it into the prize-winning pickup you see here. The body had been returned to pristine condition and it had been finished in Rangoon Red, but it had not been reassembled. Fortunately, the truck came with an array of N.O.S. body parts, including most of the trim, bumpers, grille, and much more, all purchased from a Ford dealer. The few bits that were missing were ordered from Dennis Carpenter. 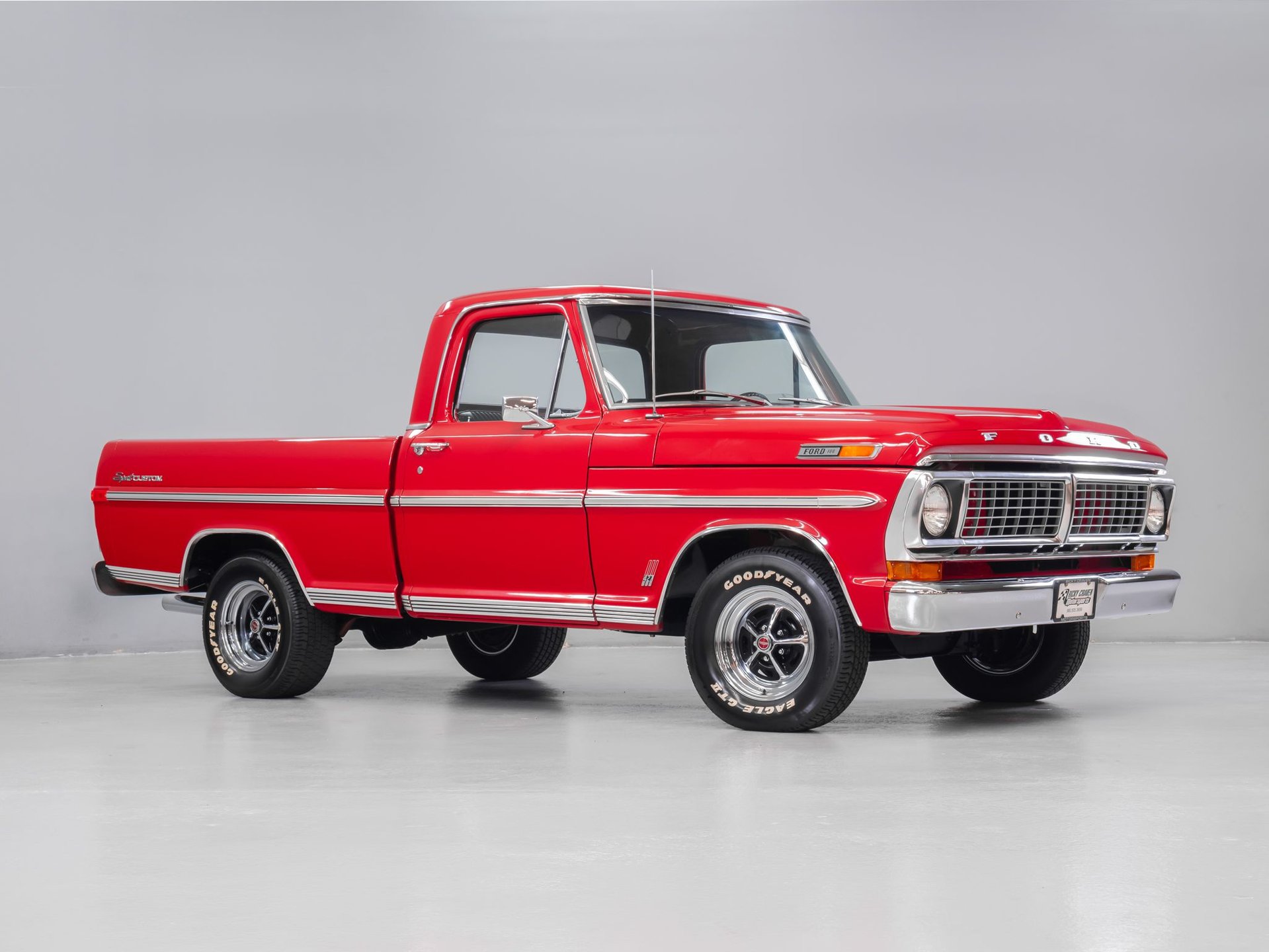 To begin the mechanical components of the truck David started underhood by building a ’64 427 V-8. The FE block was bored 0.030 inch oversize and equipped with a 428 crankshaft, which resulted in a displacement of 454 ci. Inside the vintage block are CP pistons attached to Cobra Jet connecting rods, a solid lifter camshaft from Crane, and Comp Cams–supplied roller rockers. Topping off the big-block is a vintage 2×4 intake manifold sporting a pair of 650-cfm Holley carburetors all under a vintage 427 oval air cleaner. On the exhaust side stainless steel headers connect to Flowmaster mufflers that result in that distinctive rumble from the pipes exiting under the rear bumper. 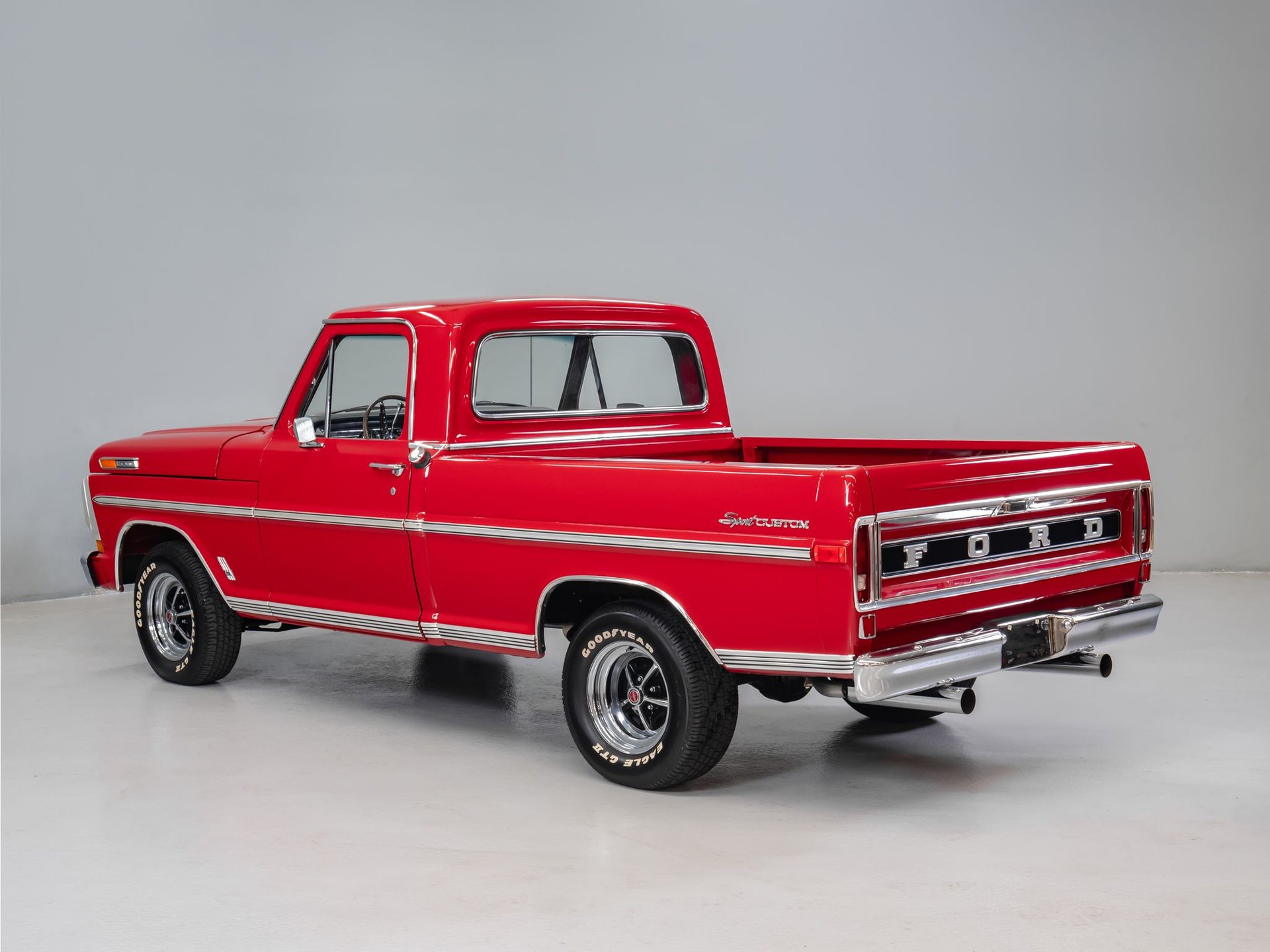 To handle the horsepower of the big V-8, Greg Slack rebuilt and modified the C6 transmission and then installed it with a 4,500-rpm stall speed torque converter. Power from the three-speed automatic is passed onto a 9-inch Ford rear axle with an open differential and 3.00:1 gears. The completely detailed chassis has been treated to all-new suspension components on both ends with disc brakes from a ’72 Ford being added to the twin I-beam frontend. Converting the bolt pattern up front from the pickup’s 5-on-5.5 wheel bolt pattern to 5-on-4.5 to accommodate the 6-inch-wide Magnum 500 was done with adapters. Converting the lug bolt pattern in the rear to accept the 8-inch-wide Magnum 500s was accomplished by installing Cougar passenger car axles in the pickup’s axle housing. Tires on both ends are Goodyear Eagles, 225/70R15 front and 275/60R15 rear. 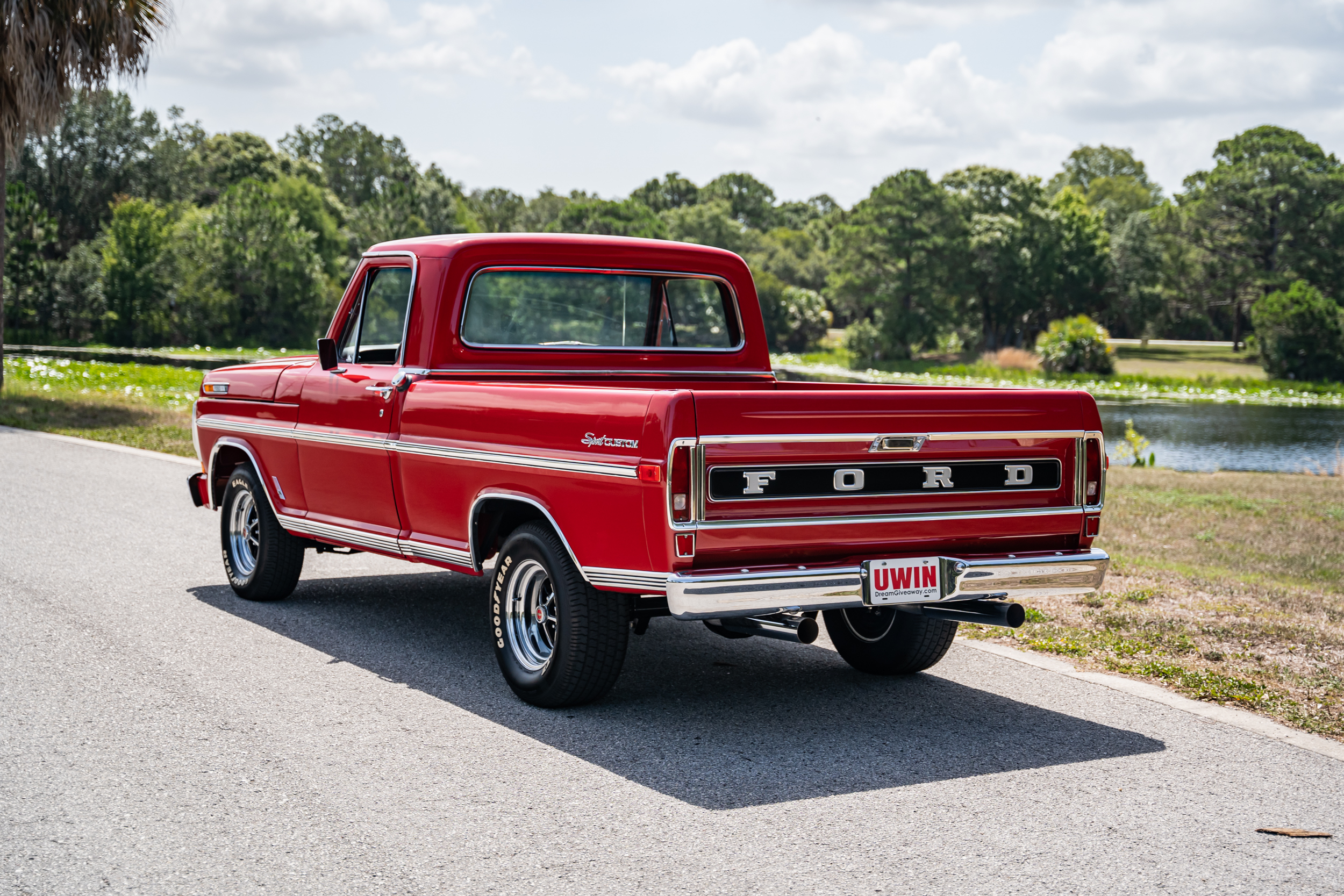 Inside the truck’s painted and detailed cab is the original front seat that has been reupholstered in the factory style with original basket weave material. New carpet, dashpad, and firewall insulator were also installed. Topping the stock steering column is a Mustang wood-rimmed steering wheel with a custom horn button medallion fashioned from a Ford hubcap emblem. To keep track of the engine’s rpm a vintage Auto Meter 50th anniversary tachometer was clamped in place in the time-honored way—with a hose clamp. 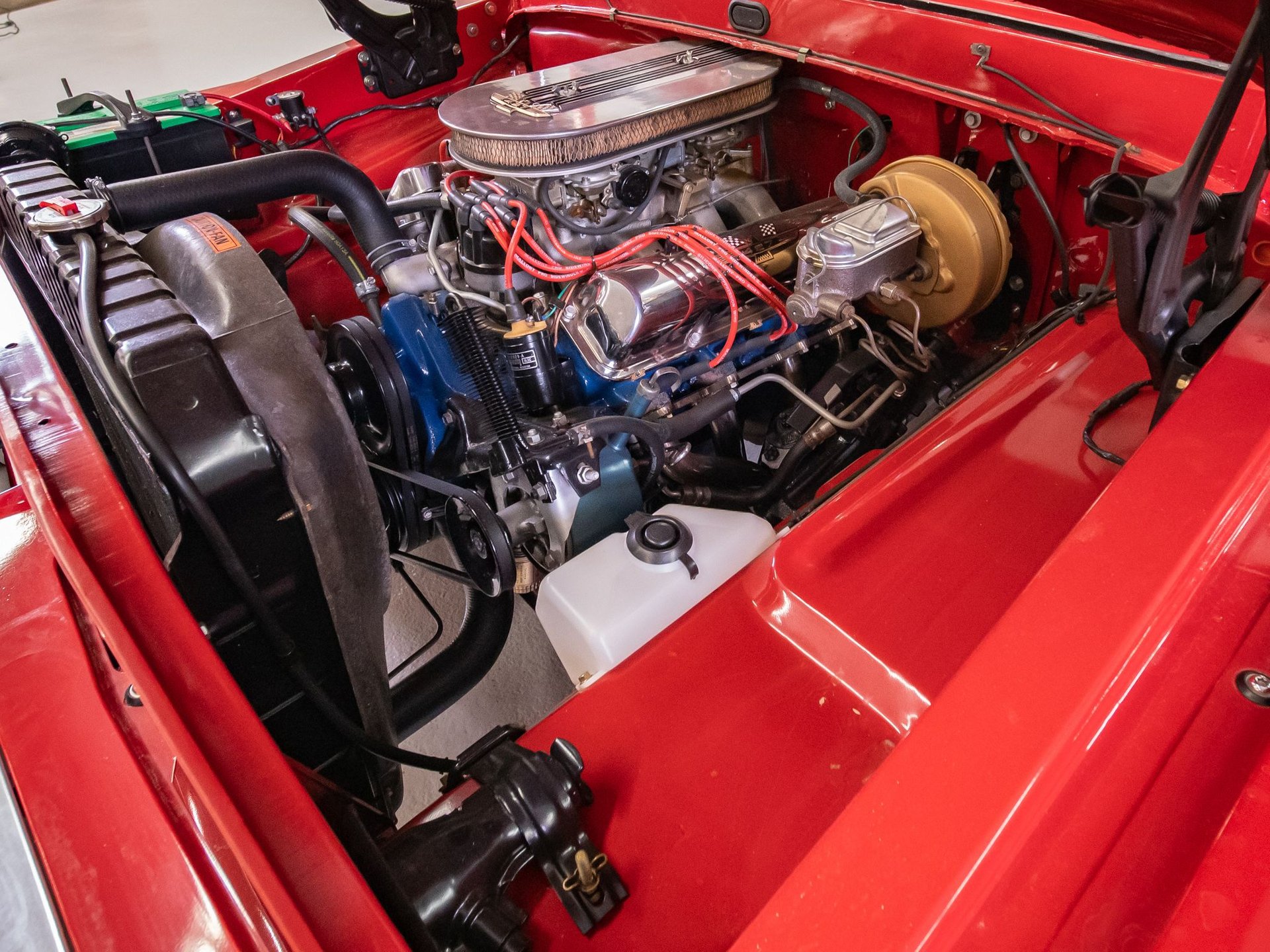 While this truck has won prizes, it has now become one. It’s part of a Dream Giveaway fund-raising program benefiting charitable causes.

As a Classic Truck Performance reader, you’re eligible to receive double tickets on every donation of $25 or more. Visit https://dreamgiveaway.com/dg/classic-truck?promo=CLASSICTRUCK to make a donation.