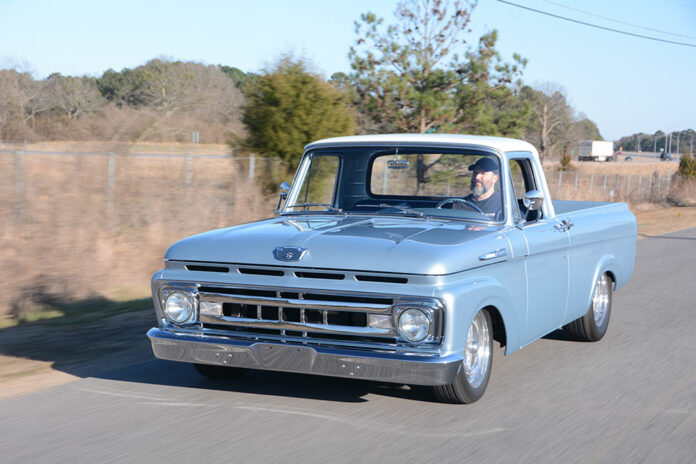 We’ve all been there. You’re doing the math on your newest project, estimating how much time and money it’ll take to see the finish line. It’s safe to say that most of us underestimate the build during those planning stages, but that’s when passion steps into the picture to keep a project from stalling out. Such is the case with Scott and Traci Pate’s ’61 Ford F100 Custom Cab, a beautifully crafted truck that originally started as a simple restoration. By the time it was said and done, the truck had a whole new personality, thanks to a combination of efforts from Dynamic Speed & Custom and several individuals along the way. 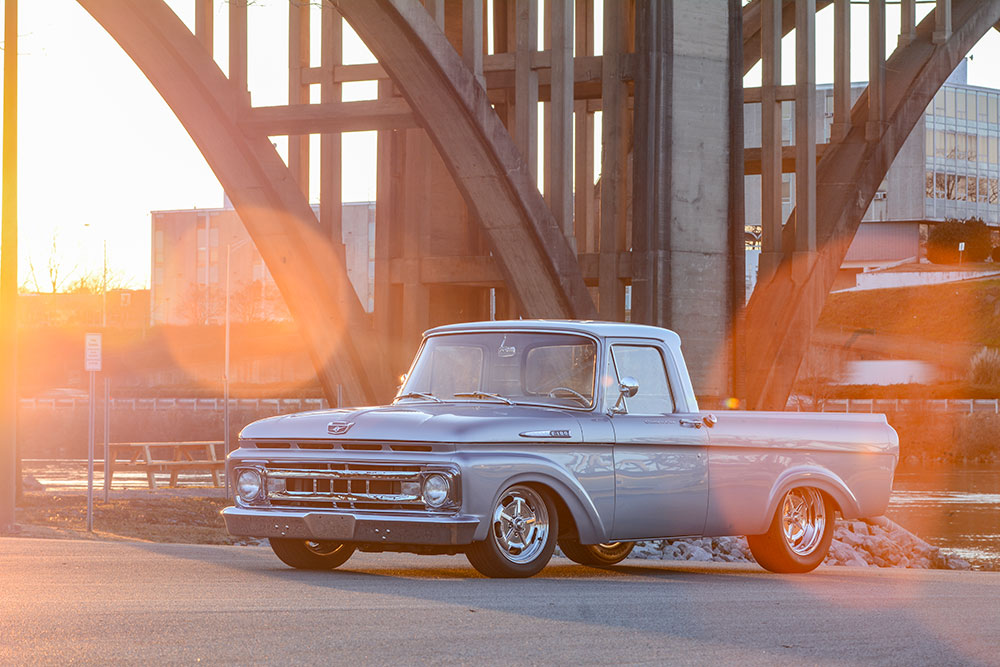 Scott and Traci ended up with this old truck in an unconventional way. It was sold at a farm auction in Rockford, Alabama, many years ago. It was used on the farm but later retired to the pole barn where the other farm equipment was parked. Scott and Traci’s son spotted this truck while visiting his girlfriend at her grandfather’s farm. Many conversations were had about the old Ford pickup, but it continued to sit there for years. The relationship continued throughout high school, and when it was time for graduation, the family handed over the keys as the ultimate graduation gift. College and marriage are now in the picture for the young couple, and Scott jumped in to kick off a small restoration but quickly remembered that there’s no such thing. 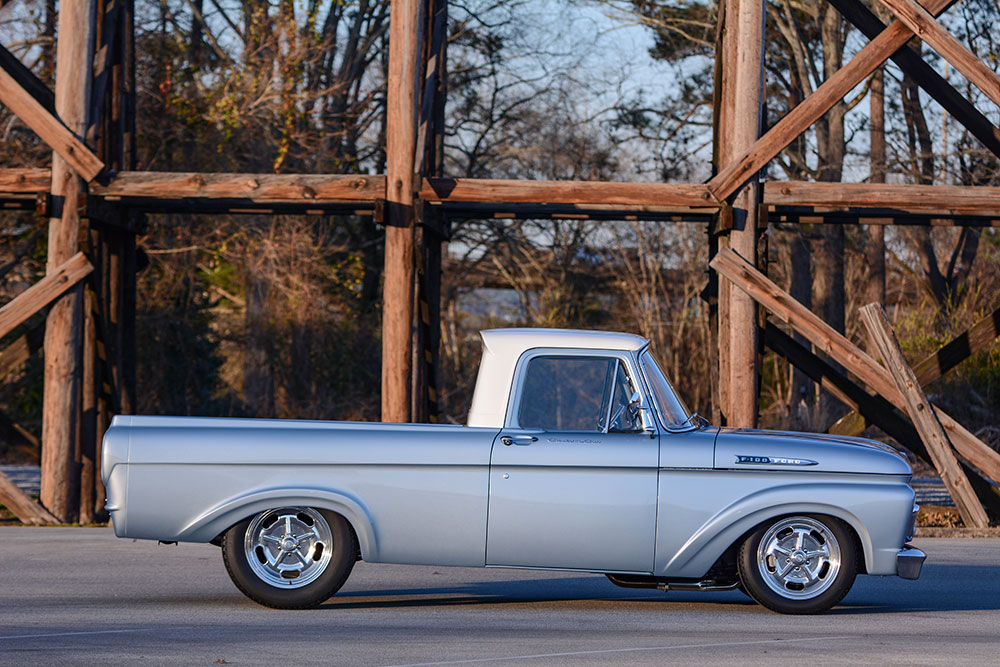 Luckily for the Pates, their location in Hokes Bluff, Alabama, positions them in a hotbed of custom hot rod and classic truck builders. Scott reached out to Dynamic Speed & Custom, and the Gadsden, Alabama-based shop took control of the project from that point until completion. The truck needed everything, so it was stripped down to the bare bones and built back with a great combination of aftermarket parts and custom-built pieces. 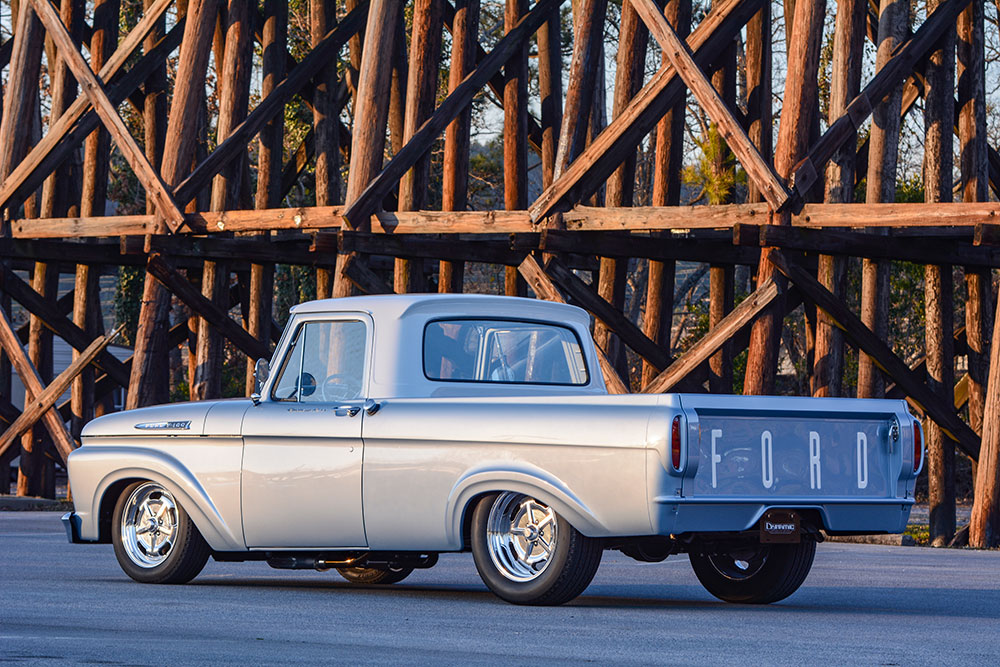 Dynamic Speed & Custom boxed the frame rails and installed the front suspension from a Crown Vic donor car. The Crown Vic aluminum crossmember and front suspension is an excellent upgrade from the old-school split I-beams, but Kyle at Dynamic Speed & Custom noticed an area for improvement. He built a set of narrowed custom tubular control arms, which narrowed the track width enough to use a traditional set of wheels and tires with a low stance, instead of using contemporary positive offset wheels. Ridetech coilovers dial in the ride height, and the Crown Vic sway bar, rack-and-pinion steering, and disc brakes are retained for the sake of simplicity. Out back, the rear axle was flipped to the other side of the original leaf springs for a quick and easy drop, while a small step notch in the rear frame rails provide adequate clearance for the rear end. Enhancing the stance is a set of Salt Flat Special American Racing wheels, measuring 17×7 and 18×8, wrapped in 215/60R17 and 265/60R18 rubber. Dynamic Speed & Custom smoothed the sidewalls for a subtle touch that gives the truck a sleek appearance. 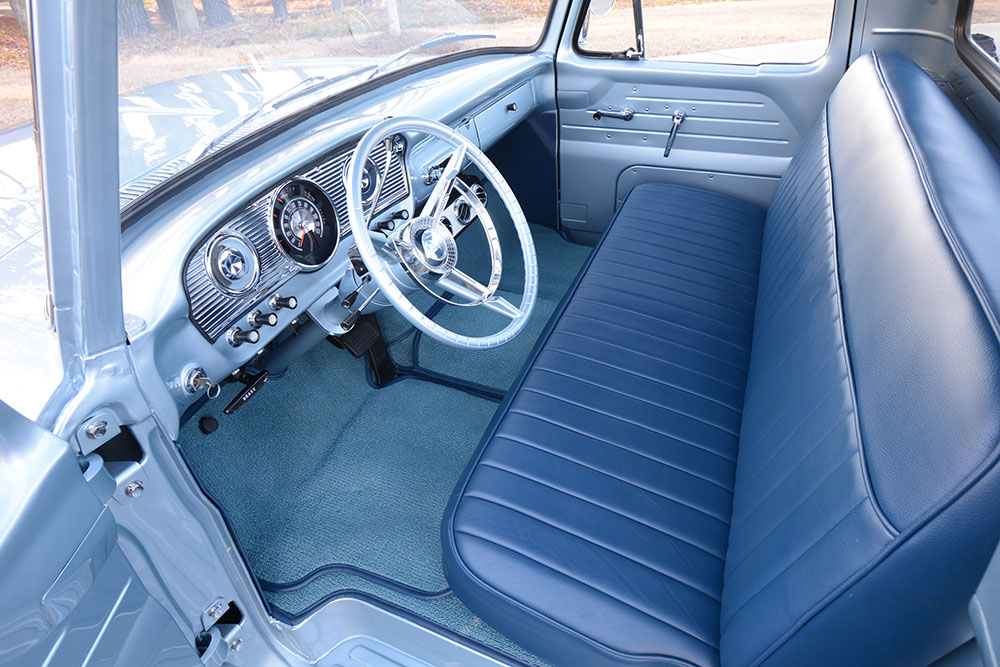 Out back is the original Ford 9 inch rear end housing, which features a 3.89:1 gearset and aftermarket axles to swap the bolt pattern to the smaller 5×4.5 pattern to match the front. The Ford AOD transmission offers excellent ratios for highway cruising. Speedway Motors 11-inch disc brakes ride behind the rear wheels, and you’ll find a dual reservoir master cylinder and compact brake booster mounted to the smoothed firewall. 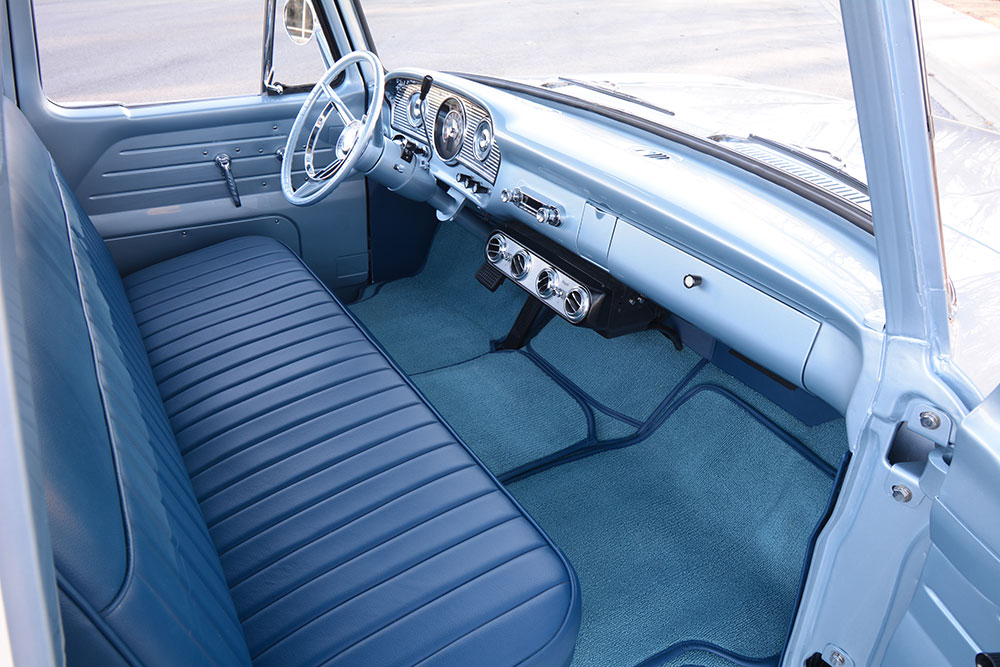 Underhood is the original Ford Y block, coming in at 292 ci and looking much cleaner than anyone could’ve imagined back in 1961. The block and heads were sent to TA’s Automotive Machine, and the engine was assembled to mostly stock specs by Cary Johnson and Jimmy Hathaway. A cast-iron 4-barrel intake manifold from a Thunderbird replaces the original intake and 2-barrel carburetor. The fuel system consists of a new tank, stock-style mechanical pump, and 600-cfm 4-barrel Holley carburetor. The original distributor is upgraded with a PerTronix ignition module and the spark plug wires are carefully routed beneath the ceramic-coated, Speedway Motors long-tube headers. Dynamic Speed & Custom built the stainless steel custom exhaust system using 2-1/2-inch tubing and polished stainless steel Summit Racing mufflers. 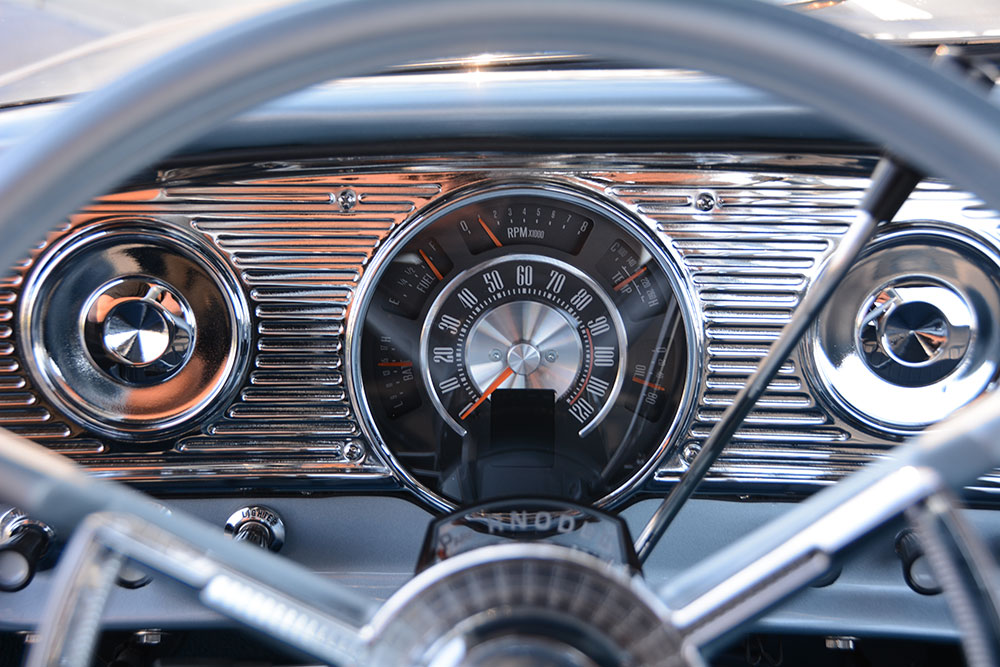 The colors and finishes in the engine bay give this truck a fully custom look, even though it’s an original engine. The custom-mixed blue features a glossy finish, while the black details have a little less sheen. Vintage Air accessory brackets mount the AC compressor low and position the GM one-wire alternator close to the block. The power steering system also has a custom bracket. 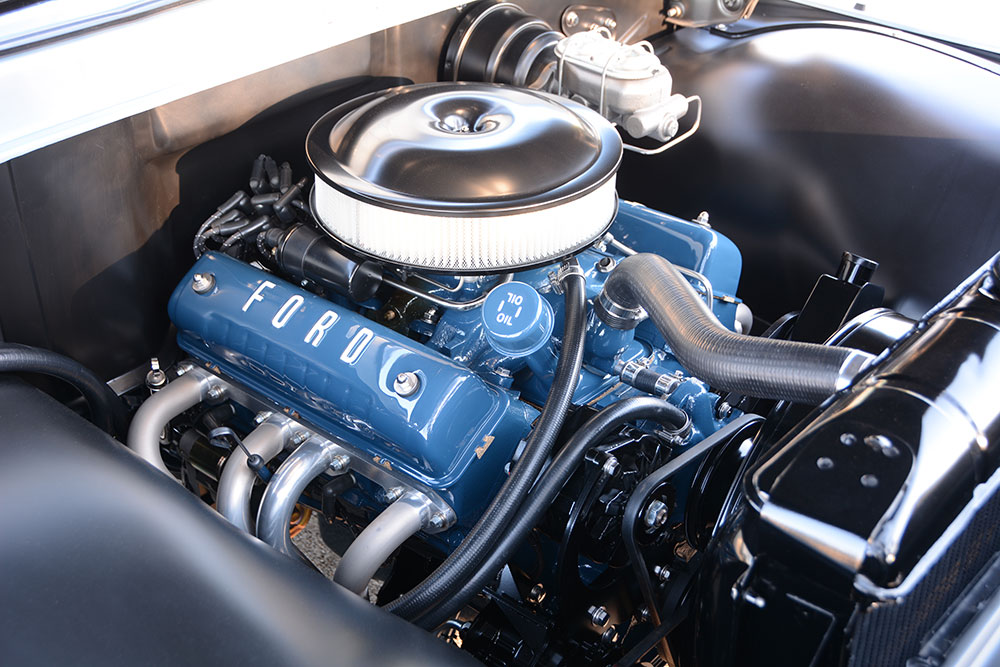 To eliminate rust issues, the crew at Dynamic Speed & Custom hand-formed patch panels for the rear portion of the cab, bedsides, and door jambs. While the fabrication continued, the decision was made to cut out the bed floor and replace it with a custom Red Oak wood floor in the center section of the bed, bordered by smooth, steel panels. Finally, the tailgate was heavily worked before the entire body was straightened in preparation for paint. Dynamic Speed & Custom used BASF Glasurit paint, utilizing Ice Blue Metallic basecoat and 923-210 low-VOC Ultimate clearcoat. The white roof and Ford lettering on the tailgate are a subtle touch. 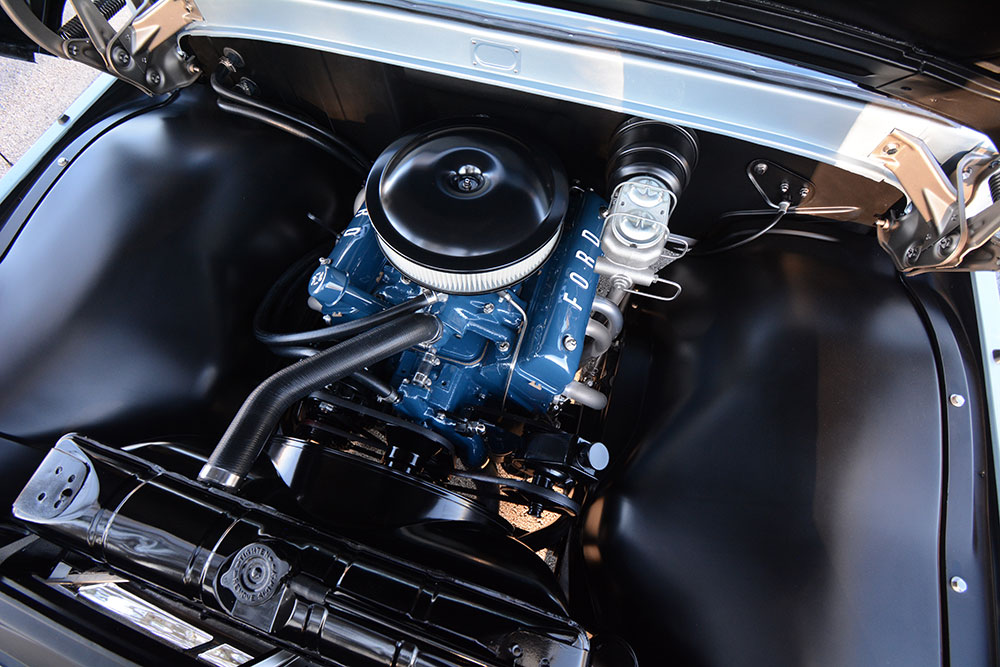 Inside, you’ll find custom upholstery by Michael Hunt featuring Moore and Giles Leather in a Cobalt Blue hue. The original seat features sculpted foam for a comfortable ride. Dynamic Speed & Custom hand-formed the headliner and Michael Hunt wrapped it in leather. Most of the interior is factory steel, so more of the Ice Blue Metallic was sprayed inside. The dash features Dakota Digital gauges, while a tilt steering wheel positions the 15-inch Thunderbird steering wheel perfectly. A RetroSound stereo system also rides in the dash, while a Vintage Air Heritage Series under dash unit rides just below. 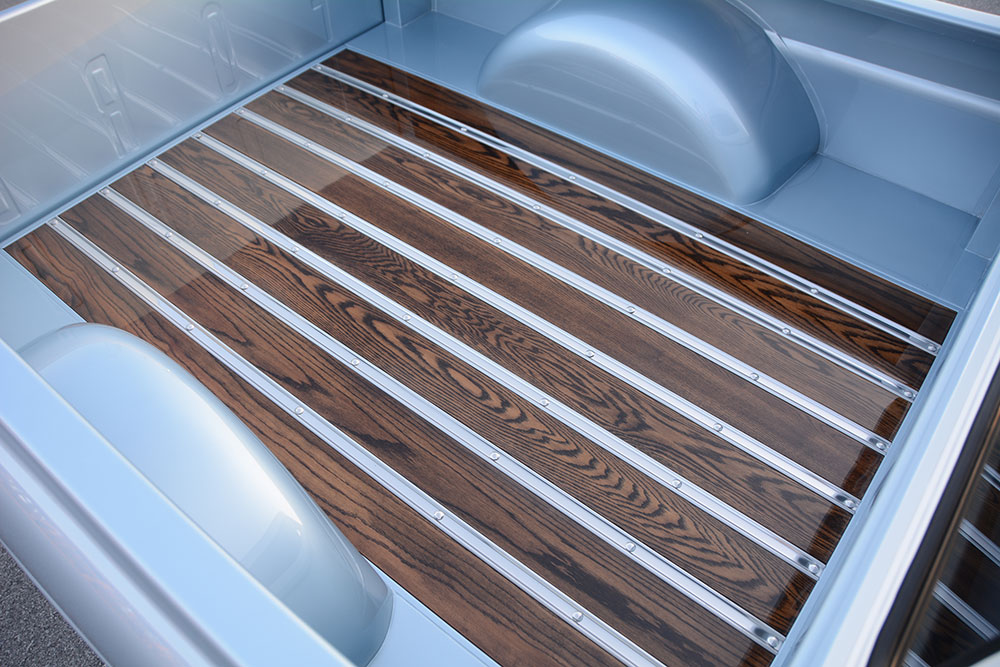 With a mixture of creature comforts, subdued styling, and the perfect stance, this 1961 F100 Unibody is a far cry from its original condition, and it certainly didn’t receive the simple restoration that was originally prescribed. But in the end the truck got what it deserved as a reward for its hard work on the farm, and the Pate family will continue to enjoy it for many years to come.