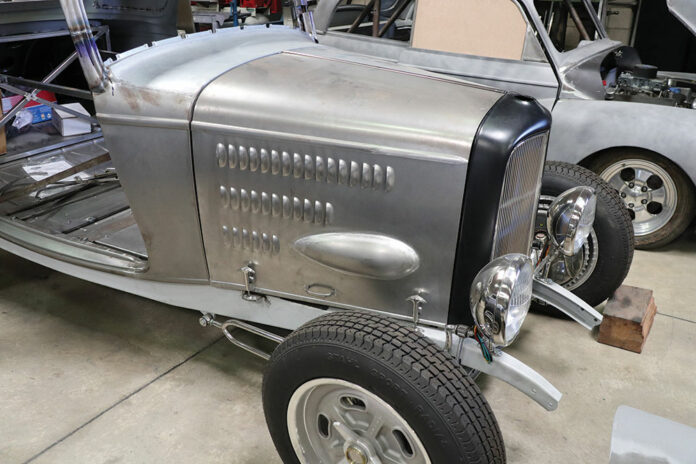 Jimmy Shine Gives Us the Inside Story and Shows Us How

By Tony Thacker – Photography by the Author

Google “louvers” and odds are you will find images of Datsuns, DeLoreans, Mustangs, and the like with louvers—plastic rear window louvers not hot rod louvers. Despite their popularity, very little seems to have been written about this aesthetic and functional device.

Few, if any, early hot rods, say from the ’30s, had louvers beyond those that Henry Ford punched in the hood sides. Of course over on the oval tracks you can see louvers begin to pop up and down in the hood sides of race cars where they were nothing but functional to get hot air out of the engine compartment.

Read More: To the North Pole In A 1939 Mercury Custom Sedan

Of course the legendary American race car builder Harry Miller was not opposed to a row or two but if you really wanted louvers in your race cars you had to look to the German “Silver Arrows” of Auto Union and Mercedes-Benz. They were literally covered with innies and outies.

Gradually, the trend filtered down to the hot rod world and after World War II we began to see louvers appear in custom hood sides and hood tops, for example on the McGee roadster that appeared on the cover of the Oct. ’48 issue of Hot Rod magazine.

To get the scoop, as it were, on this ongoing trend, we visited several hot rod shops, including Jimmy Shine’s where it just happened he was punching the hood sides of Bruce Forté’s 392 Hemi-powered Deuce coupe being built by the Veazie Bros.

For many years the best hot rod louvers in L.A. were punched by Eric Vaughn but Vaughn has retired and Shine thought he might as well build his own louver press. Such a machine can be purchased used or new from Baileigh Industrial but a 7-ton press starts at over $7,500. Even though he has a great relationship with Baileigh Industrial, Shine wanted to build his own, adding a few features.

Luckily, Shine had these Rootlieb ’32 Ford hood sides to punch. Whatever the project, be extra careful with the layout before you make a cut. You wouldn’t be the first to punch the wrong way or be a little bit off and make a mess of it—there’s no fixing a wrong-un—you start over—it’s definitely a measure twice cut once situation.

Before You Start
Something to consider before you start is the end game. If you are going to paint the louvered panel then according to Mick Jenkins at Mick’s Paint in Pomona, California, you should do as much pre-prep as possible. Single-skinned panels, such as hoods sides and early Ford hood tops, are not so bad but double-skinned panels, such as late-model hoods and early Ford decklids, need special attention.

Jenkins says all panels, both single- and double-skinned, should be prepped for paint as far as possible before you punch the louvers because it’s more difficult to do afterward. Double-skinned panels are more complicated and Jenkins has paid the price for lack of attention to the process.

Double-skinned panels have to be split anyway in order to punch the louvers and in the case of Jenkins’ Deuce roadster he purchased new inner and outer decklid skins from Rootlieb. He then cut the middle out of the inner frame so that it could be flanged and re-attached with screws. He then cleaned the inside of the lid, sanded it down, and cleaned it again with metal prep. Jenkins recommends PPG DX579, a multipurpose phosphoric acid-based cleaner and pre-paint conditioner to deep clean a metal surface prior to painting.

Once the louvers have been punched, the two halves of the panel need to be assembled and again great care needs to be taken to be sure that the louvered panel does not warp, which it did in Jenkins’ case. It warped so much it had to be replaced—a whole lot of work, time, and money. MR