A Piranha That Eats Anything Around It!

When it comes to design, the process is universal. Whether it’s a hundred-story skyscraper or this 620hp 1968 Camaro, it begins with a dream that only determination can transform into reality. The masterpiece comes to life when two talented minds involved in the creation of this automotive masterpiece are car builder Tom Argue and car enthusiast John Jerger. 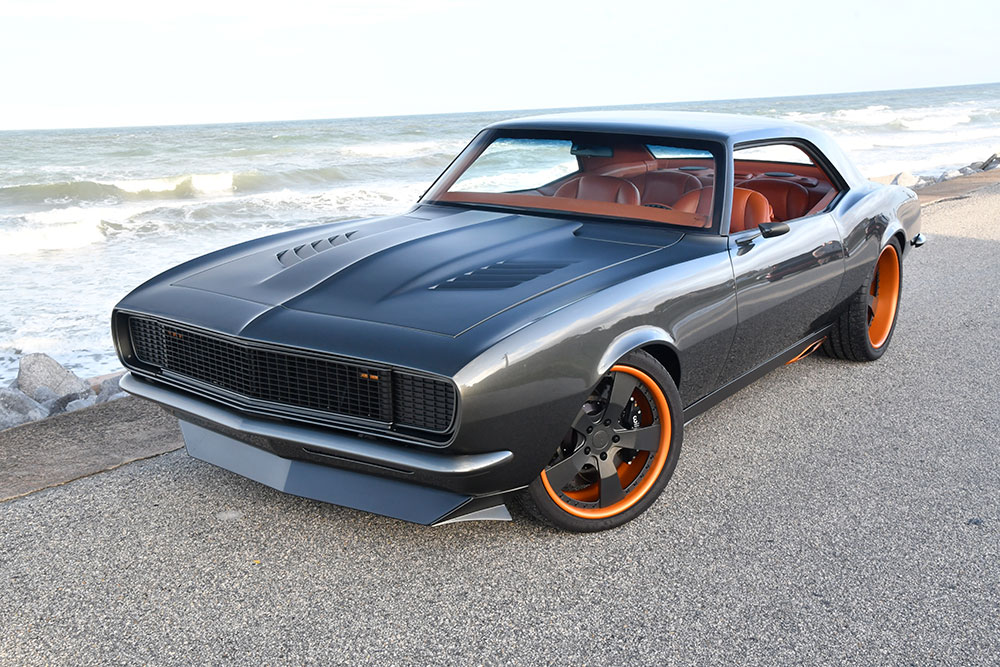 From St. Pete Beach, Florida, John comes from a car enthusiast family and has enjoyed multiple cool rides over the years. It was one of those vehicles that introduced him to Argue of Tom Argue Design in Clearwater, Florida. When John had a traffic accident with his 1950 Chevy pickup, a friend referred him to Argue for the repairs.

Argue and his team have been specializing in complete restorations and custom builds for the last 17 years. When John arrived at the shop with his damaged pickup, he noticed a dusty 1968 Camaro off to one side. It was originally a customer’s car that became Argue’s car when the customer ran out of money. Coincidentally, John was looking for a new high-performance, show-winning, daily driver. The prospect of resurrecting the Camaro was intriguing so he and Argue agreed on a multiyear collaboration to create this one-of-a-kind missile. 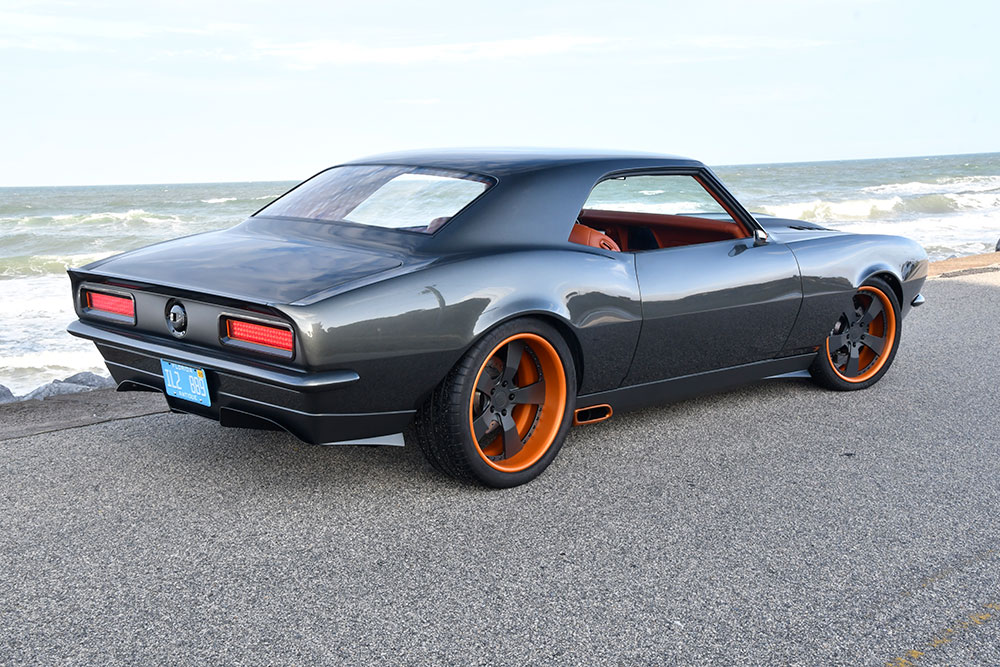 Several phases on the car had already been completed, including the installation of the automotive world’s example of ultimate chaos, a GM Performance 572 crate engine. Combining unique looks with aggressive performance, if V8s rule the automotive world, then 572s rule V8s!  Pumping out a stout 620 hp, this engine is as unique as it is powerful, thanks to the distinctive GM Performance Ram Jet 502 Intake Manifold, adapted to the 572 using the intake, plenum, and the throttle body. A set of wrapped headers and SpinTech mufflers deal with spent gases while the 572 valve covers educate spectators. A TREMEC TKO 600, 5-speed manual transmission sends power to the 3.73 rear. The final tune-up came from the Steve Morris Engines team in Muskegon, Michigan, using the Internet to remotely refine the interface between the 572, the Holley Dominator package, and the Ram Jet 502 Intake Manifold setup. Fully tuned, the adrenaline rush when you punch the throttle on this big V8 engine can cause a pucker factor strong enough to suck up the seat covers! 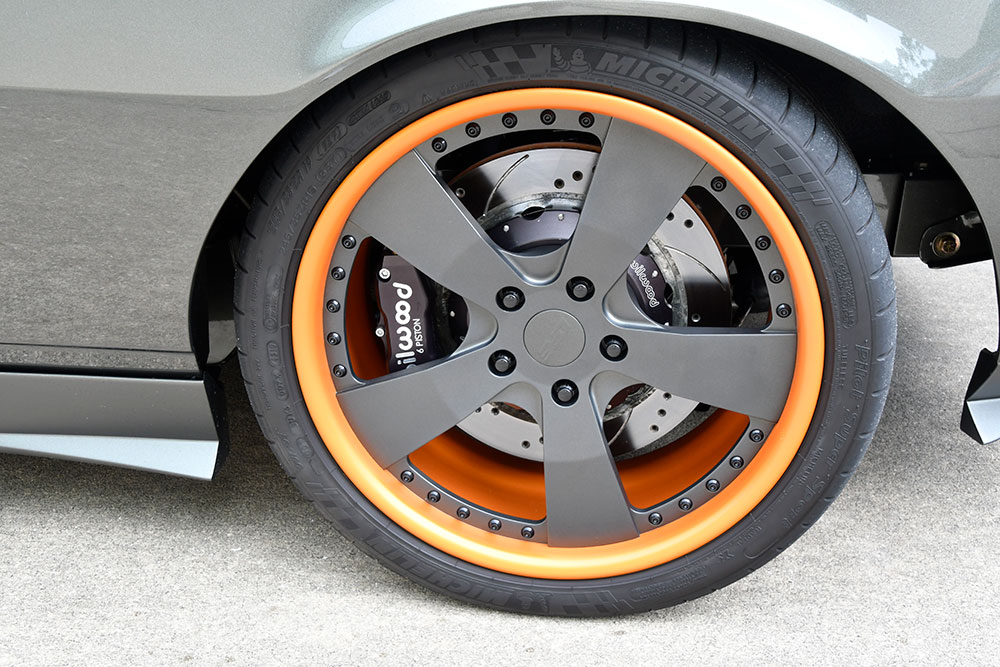 Of course, an engine with this much punch creates a few issues. To prevent engine torque from twisting the chassis like a candy cane, the first order of business was reinforcing the unibody. A Wayne Due subframe holds a C4 Corvette independent front suspension while shop-fabricated frame connectors run front to rear, supporting the Heidts four-link and Ford 9 inch rear end. Hyperco springs and QA1 coilovers stabilize all four corners while Wilwood brake kits are up front and in the rear, guarantee modern stopping power. Filling the goal of bigger shoes and classic looks, the polished aluminum DPE rims got the chassis rolling with 19x9s up front and 20x10s in the rear, wrapped in 35-series Michelin Pilot Sports rubber measuring 245/35ZR19 and 295/35ZR20. The center sections were painted to match the car while the outer rings match the interior. 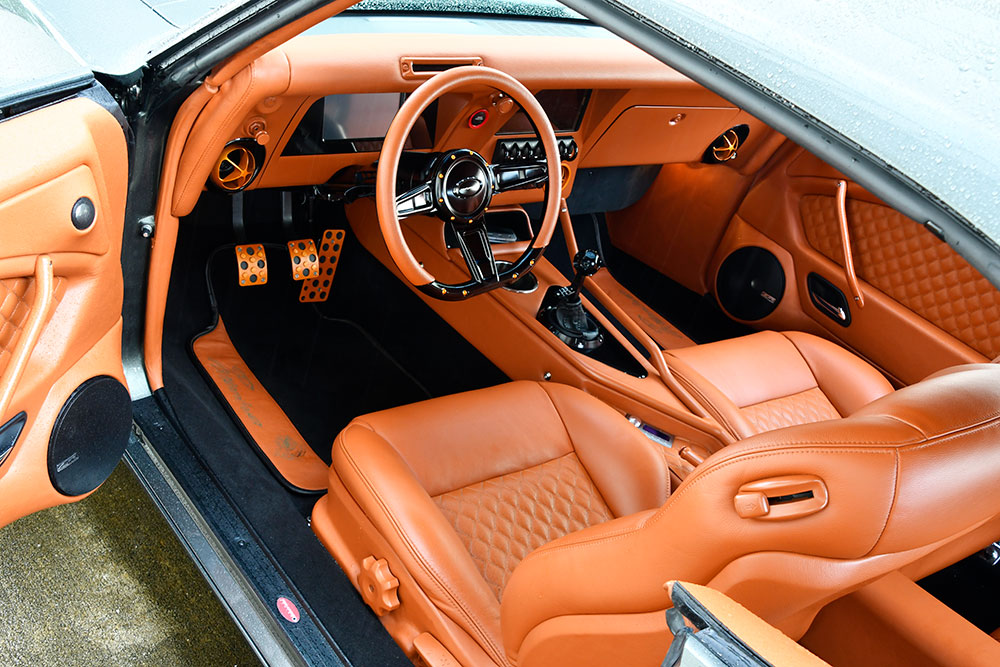 When it came time for brute force to meet genuine luxury, the interior more than answered the call. It’s hard to miss the striking Rost Orange leather, imported from Italy by Hydes leather and stitched in an hourglass pattern by the Aston Martin plant in England. They were the only ones with a machine big enough to stitch the headliner, made from a single hide. All four seats are from a Hyundai Tiburon, featuring low profiles and supportive bolsters. The fiberglass door panels from Marques Design were altered to fit and the steel center console incorporates a handrail for the passenger. Dash upgrades began with the Holley instrument cluster that cycles through multiple monitoring options along with a GPS speedometer. Just above, the tiny built-in rev limiter light also features turn signals and a high beam indicator. The block of switches in the center came from a Mini Cooper and the shifter is from Ringbrothers, complete with the subtle shift pattern indicator welded to the side and a Ripper ball on top. The Billet Specialties steering wheel continues the black and orange theme. 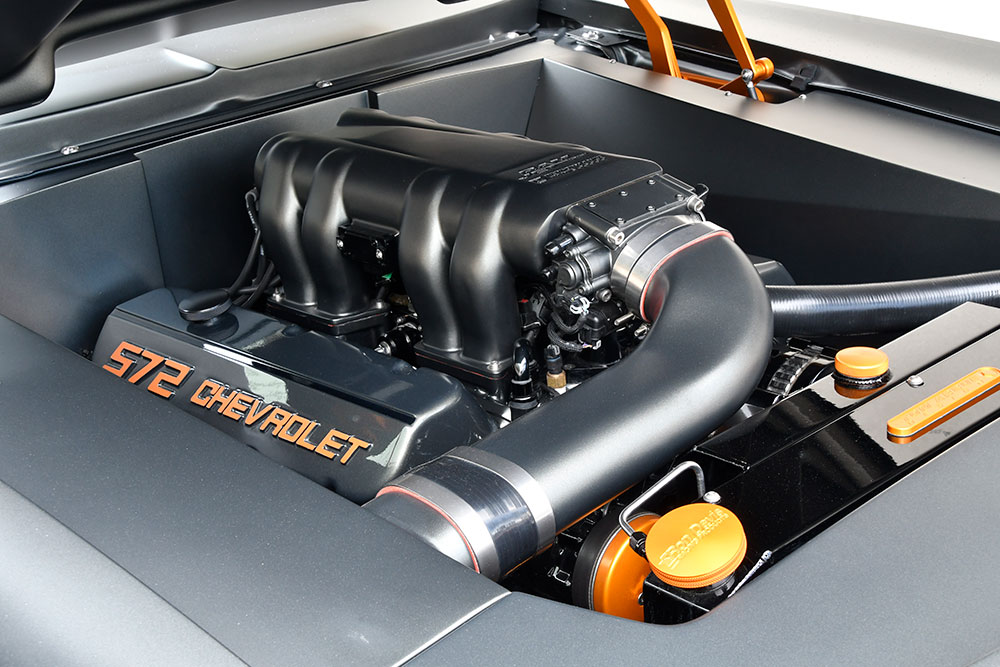 John is an accomplished stereophile and, working with the Argue Designs team, he created a sophisticated system that begins with the tiny Audison Bit One HD Digital Processor almost hidden in the console just ahead of the car’s handbrake. The playlist comes from John’s 7-inch Samsung tablet and controls the pair of floating JL Audio HD amps in the upholstered-to-match trunk delivering 2,000-watts of power. Surround sound fills the cab beginning with the separated JL Audio ZR mids and highs in the doors along with matching 6x9s in the package tray. Two trunk-mounted, 10-inch JL Audio subs send pulsing bass from the glass-lined Isobaric chamber ducted through the rear package tray. The glass in the chamber is engraved with a Piranha—an appropriate name for this omnivore of a car! 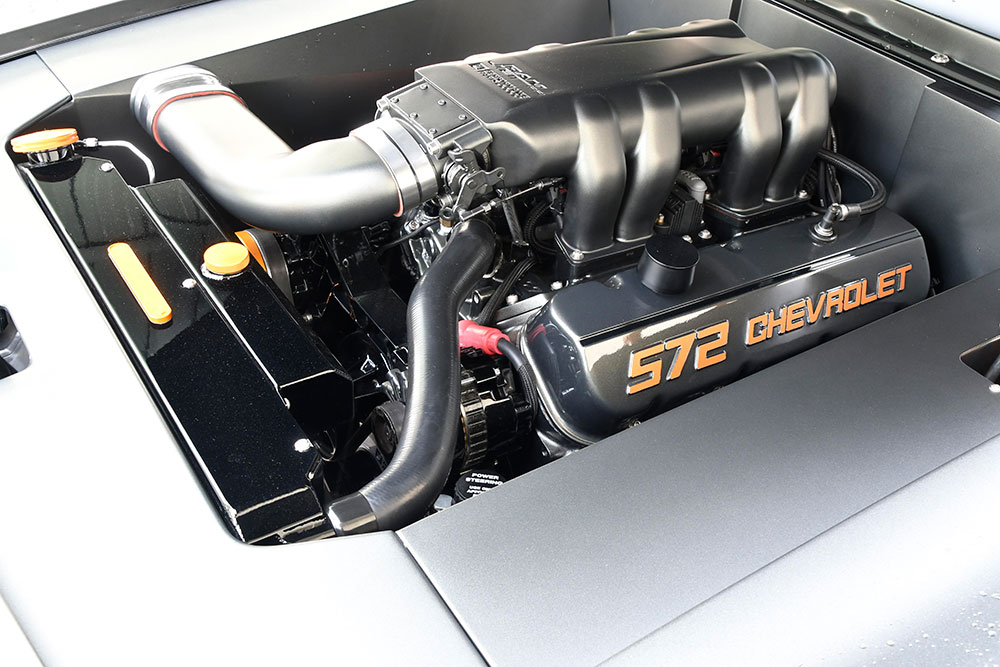 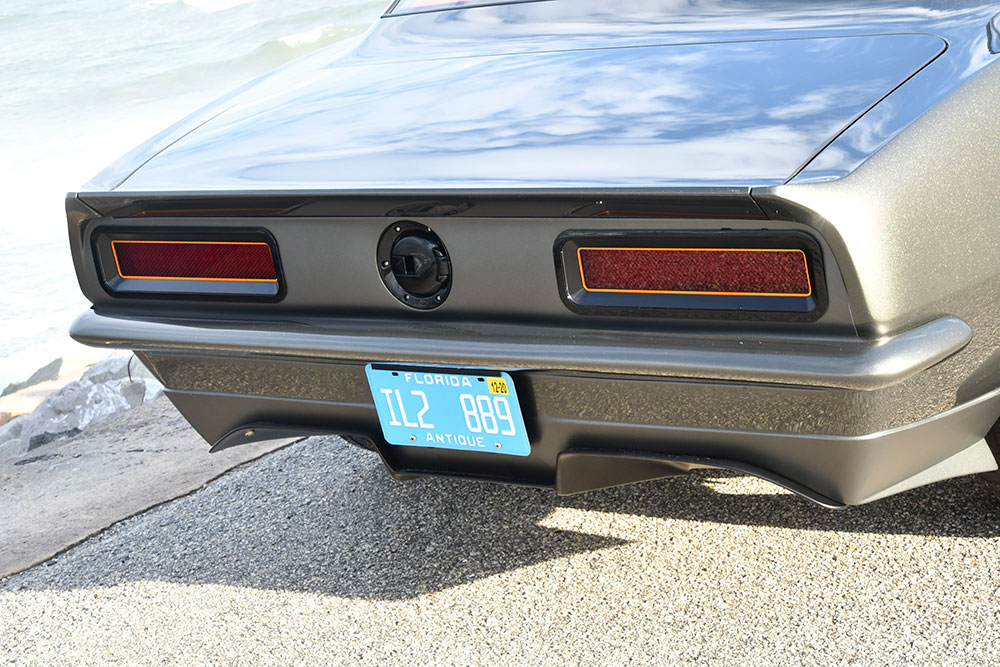 With body mods complete, the final phase was paint and PPG worked with the shop to create their unique shade of Piranha Green. The body color is accented with bright orange, another precise match to the anodized aluminum accents that appear throughout the vehicle. The car has been completed about six months, although the photo shoot was the first time the car was at speed on the interstate. John was all smiles afterward when he said, “It handled beautifully!” MR