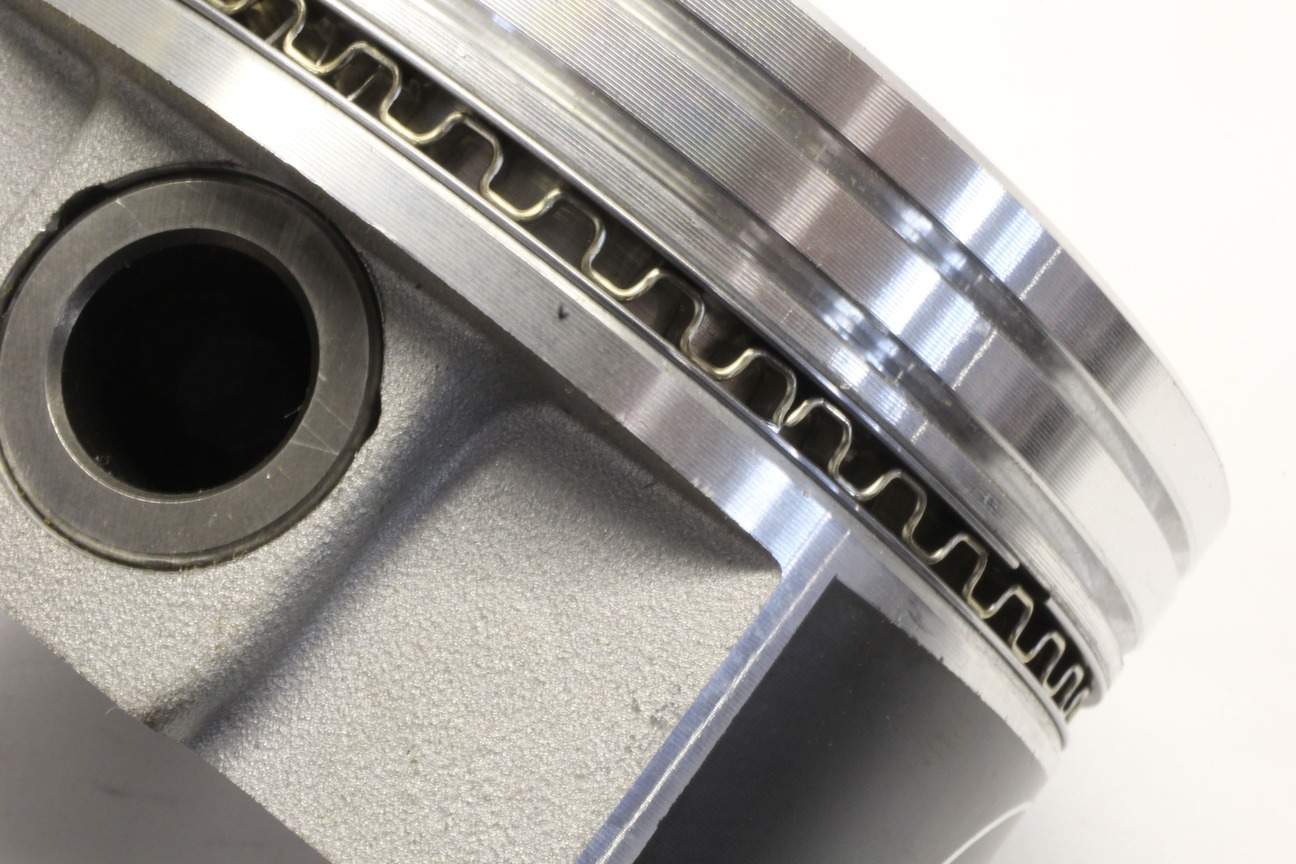 In high school, the last thing you ever wanted to be was the third rail. You know, that awkward situation when your buddy picks up a girl at the dance and you’re stuck as the odd man out. In some ways the third ring in a piston ring package also seems like it receives very little attention. But smart race engine builders have figured out that there’s hidden horsepower ready to be unleashed in the form of reduced friction if you plan your piston ring order carefully.

This story will discuss options that are present within a ring package that offers some friction-reducing advantages for normally aspirated street engines without spewing a cloud of blue oil smoke out the tailpipe. According to our friends at Total Seal, 45 percent of total engine friction is located within the piston and ring assembly. This puts a high priority on uncovering “free” horsepower just by reducing friction.

Before we go any further, let’s also cover a few definitions. When we talk about ring thickness, this refers to the ring’s vertical or axial thickness. However, another important dimension is what is called radial thickness. This is the dimension measured while viewing the ring from the top or bottom. As we will explain, this dimension plays a very important role with regard to ring tension.

The definition of a “standard tension” oil ring has most certainly changed since the introduction of the modern era of LS engines. The reason for this change is that there are a number of variables that contribute to standard tension. The first variable is ring thickness. In the past 25 years since the introduction of modern engines like the LS, ring thickness has downsized considerably.

Check it out: A Layman’s Guide to EFI

The standard ring package for a production small-block Chevy seemed forever fixed at 5/64 inch for the top and second ring and 3/16 inch for the oil ring. Racers in the ’70s began employing 1/16-inch top and second rings but retained the 3/16-inch-thick oil ring. Eventually racers thinned the top and seconds to 0.043 inch. But the LS pushed that movement even harder with production thicknesses to 1.5/1.5/3.0mm package. That has now been further reduced to 1.0/1.0/ 2.0 mm for performance applications of the LS and direct-injected LT engines. To put this in perspective, we’ve created a chart that lists the ring thicknesses in basic decimal form to make them easier to compare.

As ring packages became thinner, this has also changed the definition of a standard tension ring. For this discussion, we will use a rating system used by our friends at Total Seal for comparison purposes. Total Seal has invested in a machine that evaluates the outward tension produced by the ring in the bore. This number is expressed in pound-force (lbf) and can be thought of as a force in pounds pushing outward in the center of the cylinder.

This pound-force number is not necessarily directly related to what is generally referred to as sliding friction produced when the piston moves up and down in the bore. While there is certainly some correction there are multiple factors that also affect sliding friction, such as the coarseness of the honing procedure. In the past, engine builders used a simple fish scale tied to a piston to measure sliding friction. We’ve tried this on multiple occasions but discovered that the results from test to test varied far too much to be reliable. But it does make sense that a ring with a higher radial tension (in pound-force) will likely create more sliding friction than a ring with a lower radial tension.

This fact alone makes the “standard tension” or “low tension” labels more than a little confusing. That’s why we prefer to use the pound-force rating. It might appear that just going with a thinner oil ring like a 3 mm or perhaps even a 2 mm will reduce the friction while still delivering good oil control. These thinner packages do reduce friction but a quick check with Lake Speed Jr. at Total Seal revealed that there are many ways to reduce friction in the oil ring package while retaining a 3/16-inch ring.

Let’s start with the oil ring expander. There are several styles used, with the two most common being the flex vent and the SSU designs. According to Speed, the flex vent is the slightly more efficient. What’s often misleading is the idea that low tension is directly attributable to the expander.

How to Make Tubing Flares the Right Way: A Flair for Flaring

Speed says that the radial tension created by a three-piece oil ring package is established when the expander is squeezed between the two steel rails. The two oil rings contact and squeeze the expander much like a coil spring that is pressed downward. As the load is increased on the expander by the oil rings, this creates more oil ring tension. The concept is a little bit like adding a shim under a valvespring to increase the spring’s load.

Some engine builders believe they can modify or reduce oil ring tension by squeezing the ends of the expander where they meet. According to Speed, this does have a minor effect to reduce tension but may change over time and lose tension as the expander is heat cycled multiple times. Speed suggests a far more reliable alteration is the radial thickness of the expander rings.

Oil rings with less radial thickness (as viewed from the top) reduces the amount of load applied to the expander. So, by changing the radial depth of the oil rings along with minor changes to the expander, Total Seal can manipulate the load created by the oil ring. Speed also told us that a large percentage of their business is creating custom ring packages (which includes oil rings) to produce the desired results for a performance engine.

As an example of a ring combination for a high-performance street car, we asked Speed to come up with a Total Seal recommendation for a small-block Chevy using a 1/16-, 1/16-, 3/16-inch piston. The part numbers he recommended originate as part of the Classic ring family with a lateral gas ported ductile iron top ring (PN CRG-3690-35). This is a unique moly face top ring with multiple small gas ports milled into the upper lateral portion that allows cylinder pressure to more easily find its way behind the top ring to force it outward, creating a better seal during combustion.

The second ring is a more typical ductile iron ring with a reverse twist to help with oil control. The third oil ring portion is labeled as a “low tension” design but is listed as having a 16 lbf of radial tension that essentially splits the difference between the old-school standard of 20 lbf and an LS-style 3mm oil ring spec of 11 lbf.

There’s also a CRL-3690-35 Total Seal ring package similar to the above recommendation that does not use the gas-ported top ring but does offer a lower radial tension oil control ring rated at 11 lbf. This part number is roughly half the cost of the gas ported top ring version. Of course, it’s also possible to do a custom combination that includes both this lower oil ring radial tension and the gas ported top ring. That’s the beauty of Total Seal’s ring packages that allows you to mix and match components as desired.

But there’s more to this story than just the oil control rings. While many consider the second ring as a backup compression ring, its primary task is to act as a second oil control ring. In this case, the second ring removes the oil left on the walls by the oil rings. To this end, the Napier or hook-style ring design offers exceptional abilities to scrape most of the oil remaining on the cylinder wall as the piston moves downward in the bore. The Napier design uses an inverted scraper design to act like a squeegee on the cylinder wall, removing additional oil from the cylinder wall. Keep in mind that a small amount of oil is still needed on the walls to lubricate the top ring, but this is generally located within the crosshatch pattern machined into the cylinder wall.

As you can see, there’s actually quite a bit of technology that can be used to enhance engine horsepower and improve oil control all localized around that third ring groove from the top of the piston. All you have to do is understand these ring nuances and speak their language to uncover the horsepower and torque hidden there.

All ring thicknesses are offered in inches unless otherwise stated. Note that a 1mm top ring is exactly half the thickness of the old 5/64-inch.

The percentage improvements listed are referenced against the original 3/16-inch standard.