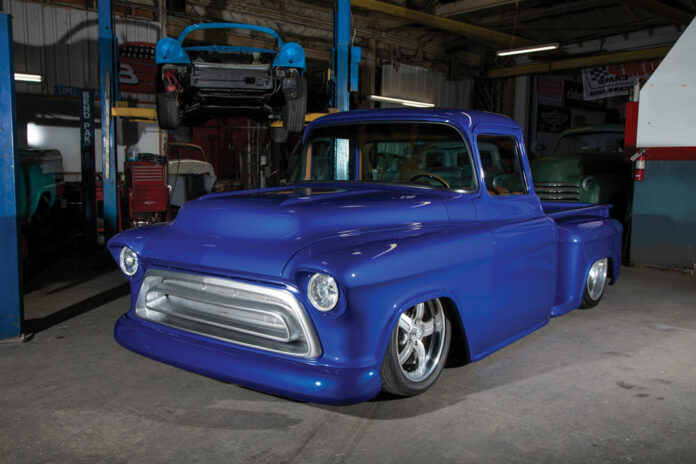 After a trip to SEMA, This 1957 Chevy 3100 Turned from a Budget Build to a Showstopper Decades in the Making

This 1957 Chevrolet 3100 pickup project started decades ago, but after a trip to SEMA, Tim Sharp decided to build a showstopper with tucked bumpers, shaved handles, and a killer matte/pearl paint. 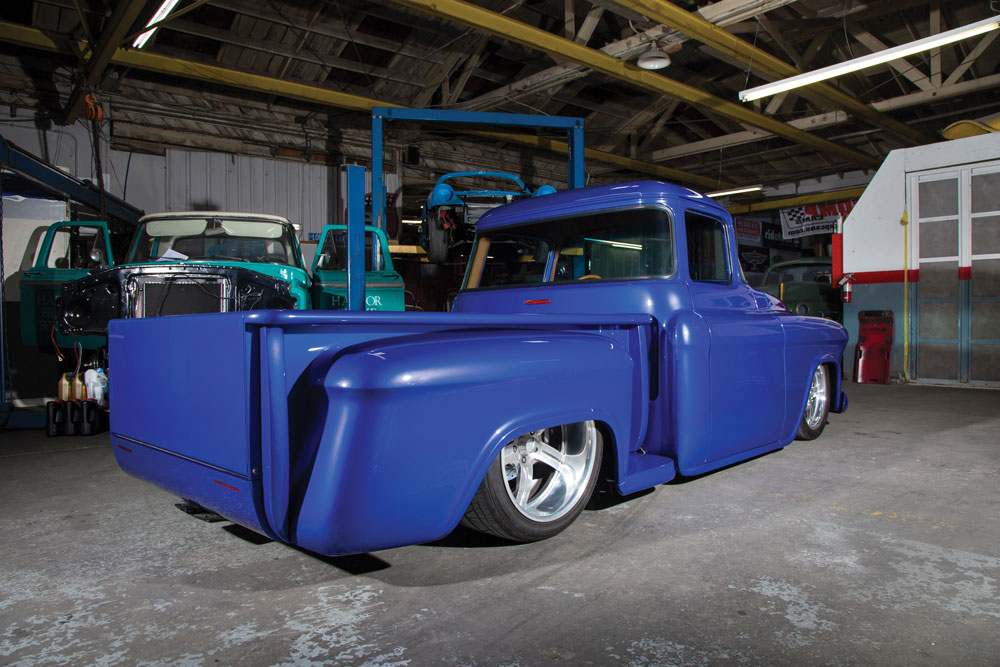 Having a father who worked a junkyard it was inevitable that Sharp would grow up to be a total gearhead. When it comes to automotive taste, Tim is all over the place, as he’s had mini-trucks and a few VWs as well. About 20 years ago he had an interest in working on a Ford F-100 with a big back window.

As Tim asked around for what he was looking for, his sister told him she may know of a truck at her high school friend’s parents’ house. When Tim went to look at the truck he could immediately tell that it was no Ford and was actually a 1957 Chevy 3100. It did have a big back window and the owner’s wife wanted the truck gone. Though Tim only brought $2,000 with him, the owner’s wife wanted it gone so she made sure the deal was done. 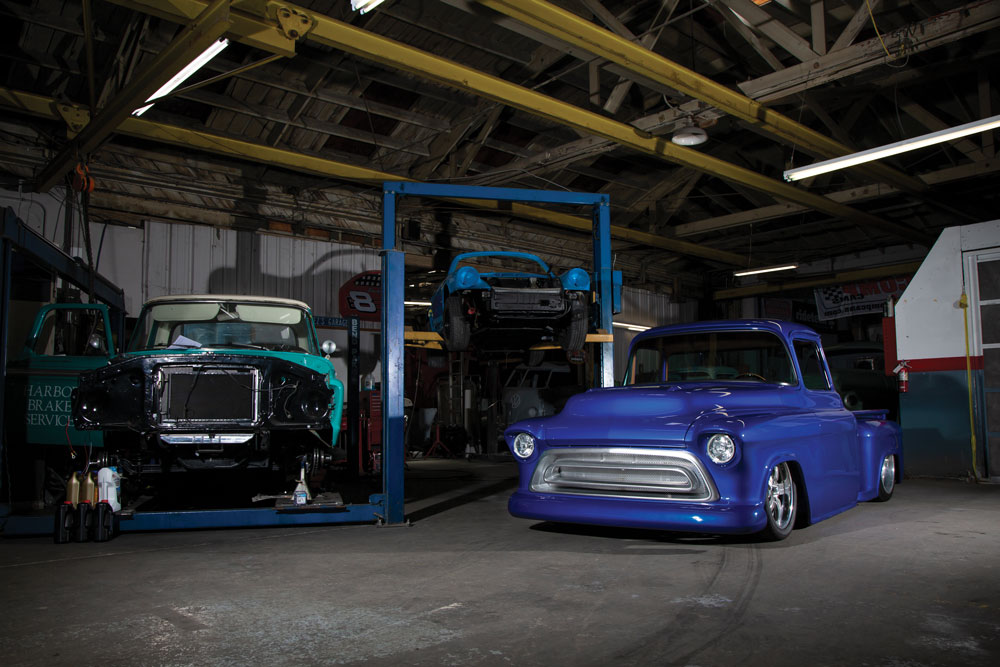 The 1957 Chevy 3100 truck was then dropped off at Tim’s mother’s house and parked in the backyard to store while he made plans to work on it. Well, days turned into years and the Chevy 3100 truck sat for about two decades. During that time, his mother’s chickens decided to make it their coop and many others tried to make an offer on it. Every time she would turn them down saying that it was the home for her backyard farm.

When Tim turned 40 he decided that he needed to make a rebuild happen on the Chevy 3100 instead of letting it sit and go to the birds. By way of a friend’s referral, Tim was able to get in contact with Ricardo Lopez of Customs by Lopez for a budget build of the pickup. Well, that was the plan until Tim went to the SEMA Show and figured he needed to step up his game and go all-out. 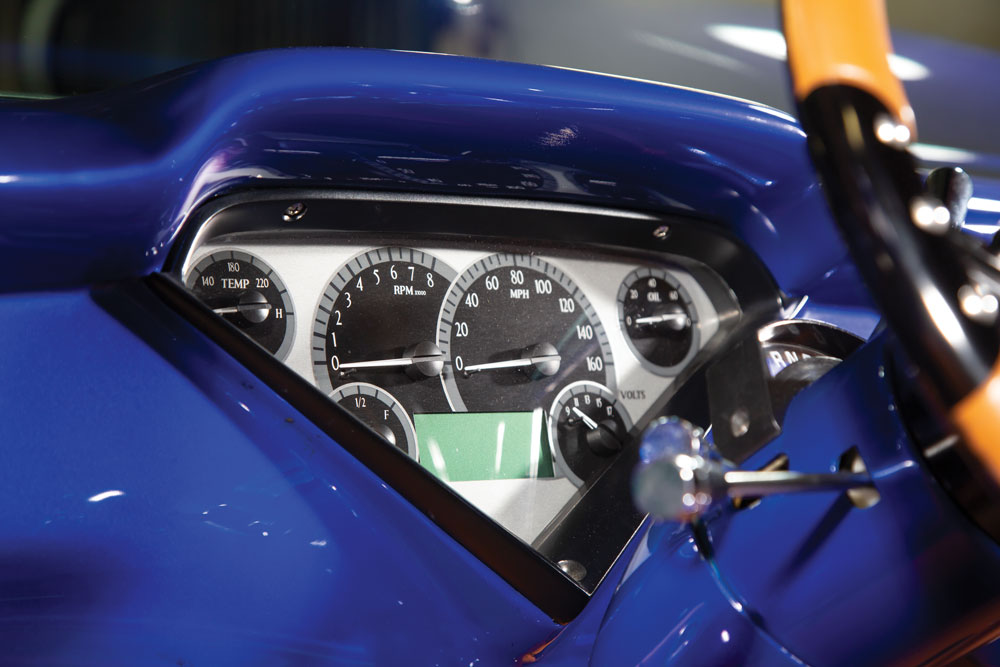 Customs by Lopez happens to be a one-stop-shop and started the transformation with the chassis work. Upfront is a second-gen Camaro suspension clip that received Ridetech Strong Arms and ShockWave airbag-equipped struts. Behind the cab a new frame section was made to host a custom four-link with another pair of ShockWaves.

To make it stop like a modern SEMA truck is a set of 12-inch Wilwood disc brakes with six-piston front calipers and four-piston rear calipers. 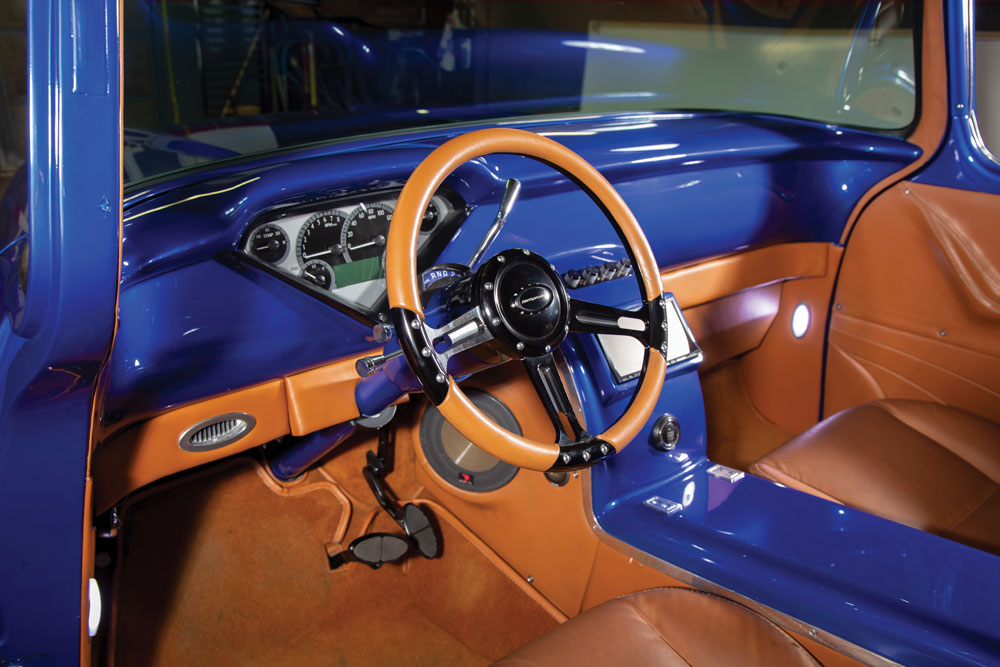 The truck already had a 327ci Chevy Corvette small-block engine that was rebuilt for reliability. It now has an Edelbrock fuel injection unit and has been dressed up with a March Performance accessory drive and air cleaner. It is cooled by a U.S. Radiator with dual electric fans for maximum performance.

Letting exhausted gases out is set of Sanderson headers and custom X-pipe exhaust that was made from a MagnaFlow Builder Kit. Engine horsepower now moves from a Turbo 350 transmission through a custom driveshaft and to a narrowed Ford 9-inch rearend.

Making this truck a total stunner is the body, which has quite a few mods. Starting up front is a smoothed and tucked bumper along with a custom grille that has a floating center. The cab was shaved of seams, wipers, and door handles to make it completely slicked out. For the bed, stake pockets were removed and ends of the rails were rounded as the tailgate was shaved. 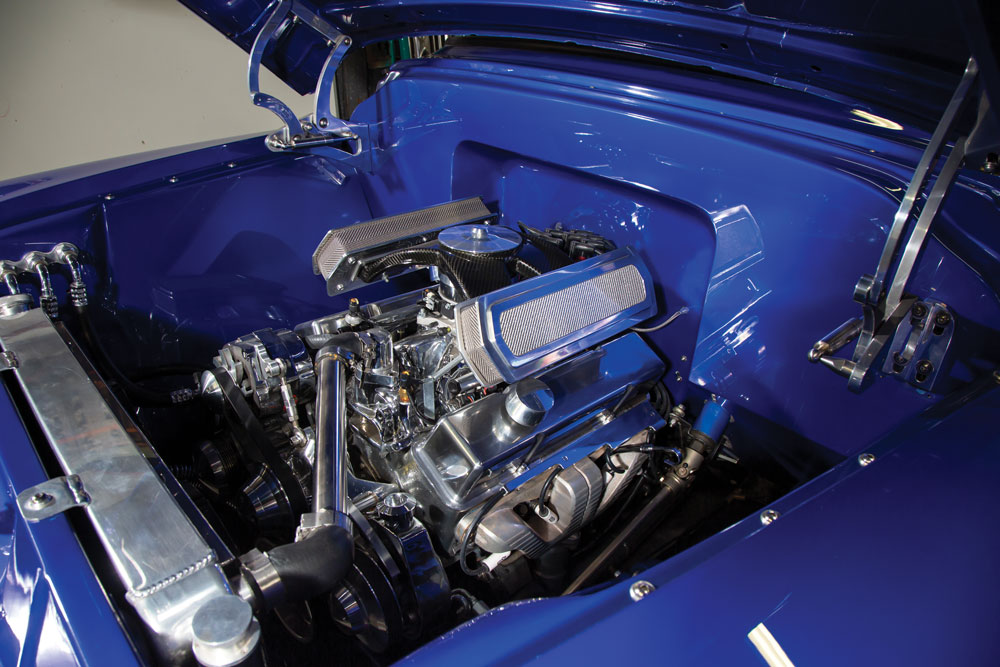 The steps were reworked and the inner bed was shaved and received new wheeltubs along with a raised wood bed floor. The rear bumper was removed and a roll pan was put in place with LED taillights.

Setting off this truck is the incredible House of Kolor Stratto Blue paintjob that the team at Customs by Lopez applied. This was achieved by working the body straight and laying down several layers of basecoat. This was followed by several coats of blue candy paint and clear before getting buffed to a high shine. 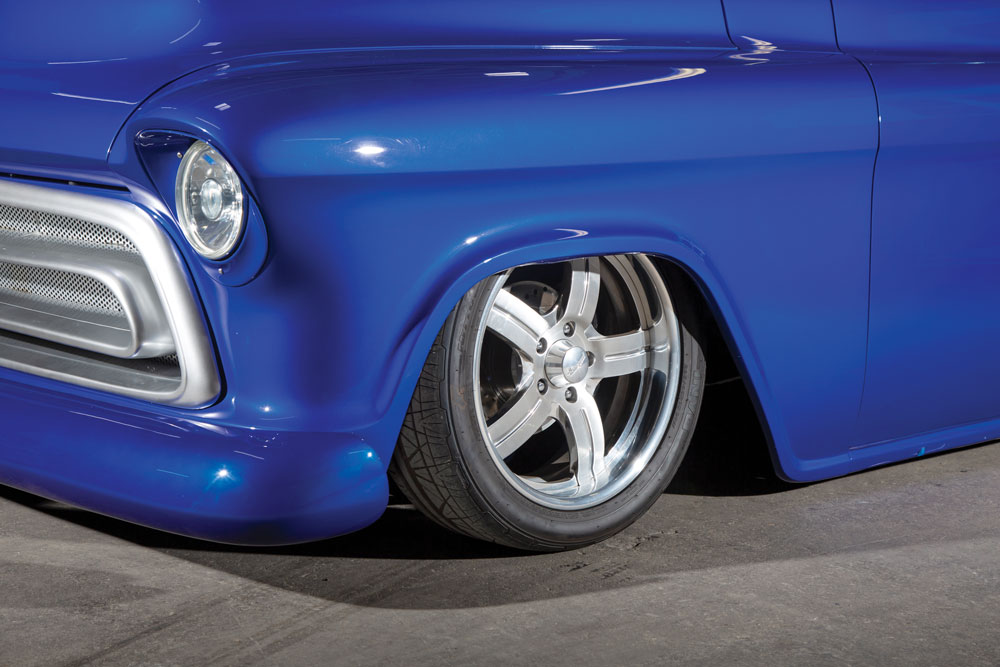 Completing the work on this truck was the completely custom interior. The big highlight here is the shaved dash that flows into a center console that connects to the back wall of the cab. Making it easier to drive is a Dakota Digital gauge unit, ididit steering column with Billet Specialties wheel, and a Focal audio system with Kenwood head unit.

The interior was also upgraded with a pair of bucket seats from an Infiniti G35 and full custom door panels, all covered in leather. 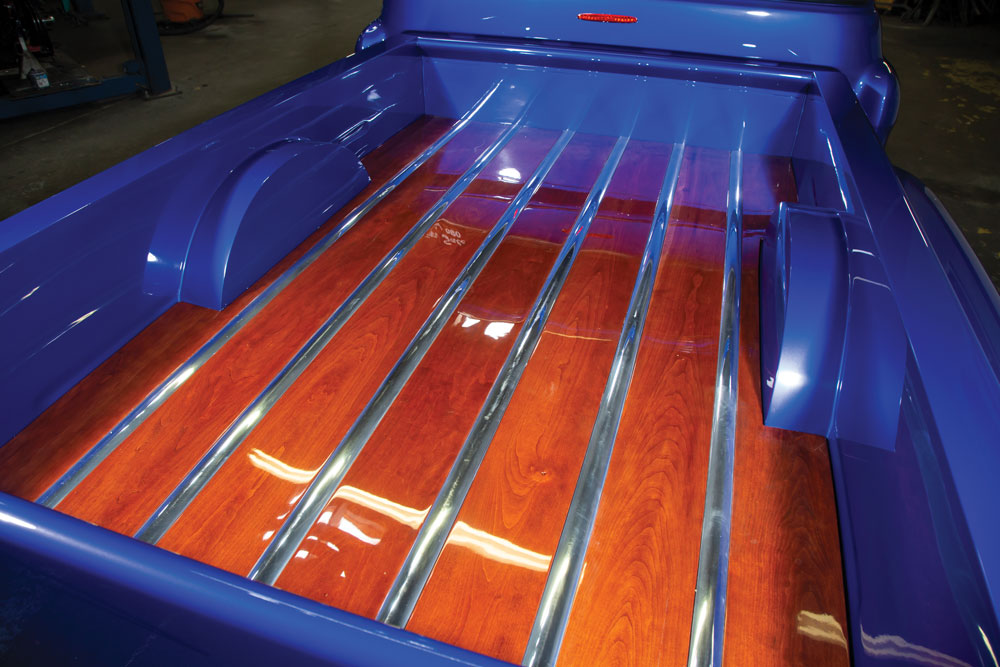 Though plans with this former chicken coop changed throughout the process, the final result speaks for itself. We’ve seen a number of these SEMA trucks cleaned up, but Tim’s definitely stands out from the rest. The ideas that were implemented along the way may have held up the time of completion of this build, but they were all worth it in the end in making this truck truly unique.