Why This 1927 Ford Roadster Was Ahead Of Its Time

We must all take a moment and be thankful for all the talented hot rodders who appreciate our youths’ “dream cars” and use their talents to make sure they don’t vanish. The number of restorations and tribute cars we’ve all seen over the past few decades should allow all of us to enjoy the cars of our dreams or allow us to see cars we would have never otherwise seen. One more to add to the collection of history brought back to life is the Dick Williams channeled ’27 Ford roadster originally built in 1951-52.

Winner of the title America’s Most Beautiful Roadster from the 1953 National Roadster Show is back once again and in all its former glory. (The first show was held on January 19, 1950, at the Oakland Exposition Building and the word “Grand” wouldn’t be added until 1963.) A special “thank you” must go to the current owners of the Williams roadster, Ross and Beth Myers. From here the likes of Roy Brizio Street Rods and Team Brizio, Darryl Hollenbeck of Vintage Color Studio, Sid Chavers Upholstery, Sherm’s Custom Plating, and H&H Flatheads were all involved in bringing back the old roadster to its 1953 glory … and then some. 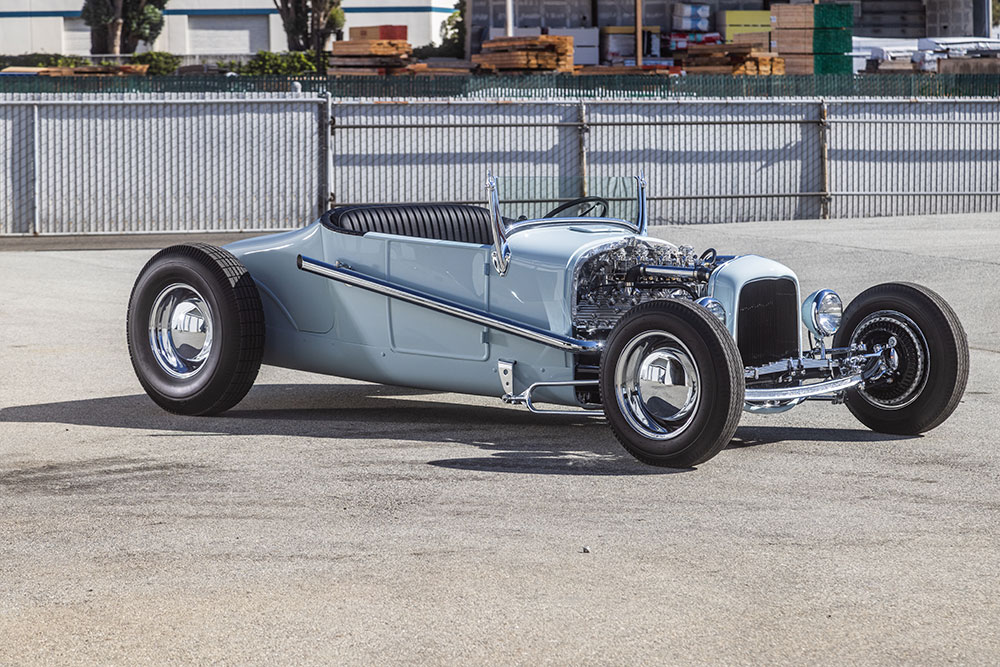 It should be noted that the channeled ’27 Ford roadster was built on a custom 2-1/2-inch chromoly tube frame, something that was well in advance of its time. The gang at Brizio’s kept the original chassis and restored it. Nestled beneath the body and between the frame rails is a pair of approximately 9-1/2-gallon-each gas tanks. The hot rod was also the real deal at the track. It made a 123.63-mph pass at the 1951 Bonneville Nationals, weighing in at 1,850 pounds, and appeared in the May ’53 issue of Hot Rod magazine while still owned by Williams. It was by 1974 that the old roadster’s new owner Dick Falk changed the color to a Candy Apple Red and other notable changes, such as the wheel and tire combination, new upholstery, and changed the location of the rear hairpins to be visible on the outside of the body. (It was during this time frame that I became involved with the then root beer brown old roadster, painted by Falk, by placing it on the cover of the Dec. ’74 issue of Rod Action.) 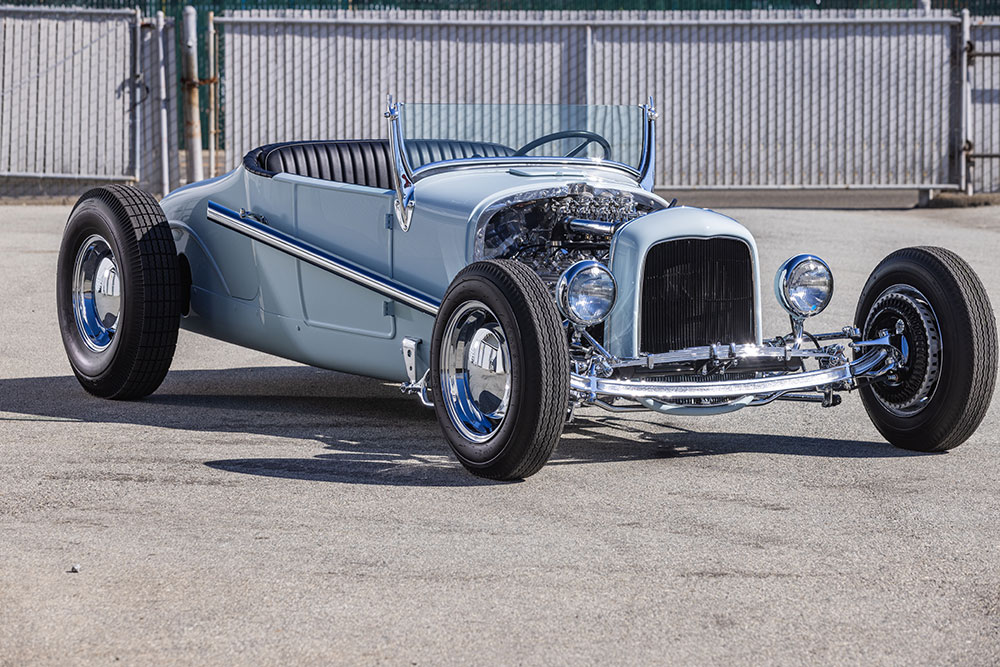 It was then purchased by Blackie Gejeian, and he added it to his collection that featured several AMBR-winning roadsters. While under Gejeian’s care the roadster remained fundamentally unchanged but did begin to gain in its provenance. The channeled ’27 Ford roadster appeared at the Pebble Beach Concours d’Elegance, and was featured in The Rodder’s Journal, Street Rodder, and Mobilia magazines, and coffee table book Hot Rod Milestones. 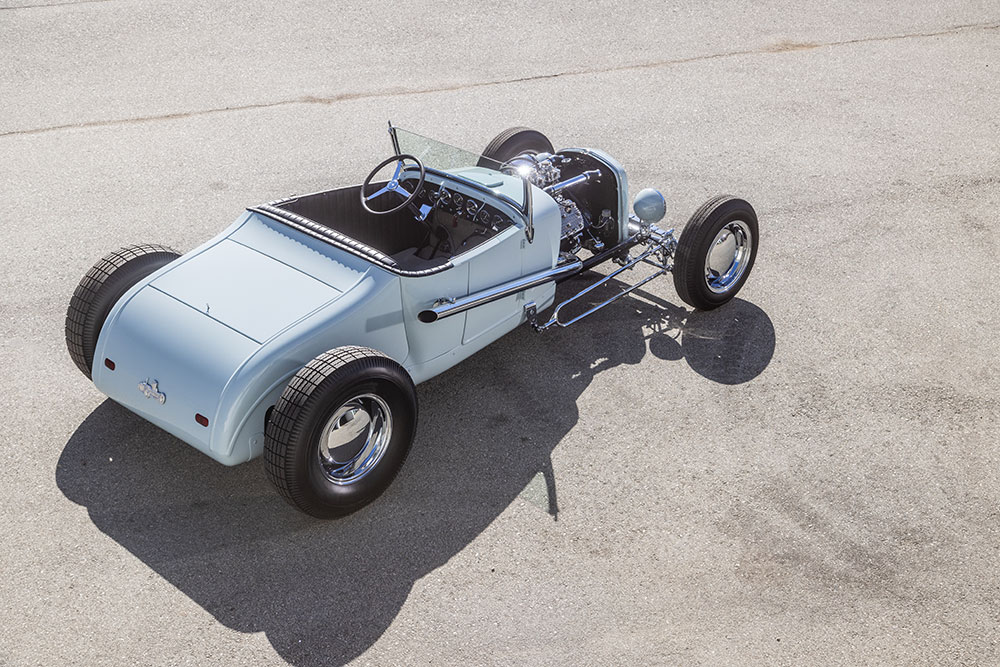 That brings us back to current times when the Myers family wanted the car restored to its original 1953 AMBR-winning appearance in its powder blue color (originally a lacquer-based paint). The original chassis is key to this car’s history, so Roy Brizio oversaw the project with Team Brizio (Jack Stratton, Jim Vickery, Dan Hall, Lenny Ernani, Jair Valle, Cary Buck, Andrik Albor, and Dan Carrol) to maintain so much of its original character. The original chassis made by Williams was from 2-1/2-inch od chromoly steel tubing as were the front, center, and rear crossmembers. He also used the suspension from a ’48 Ford as the basis for the front and rear suspension and a ’48 Ford pickup steering box with a homemade steering arm. Also employed is a Model A rear spring.

Read More: Function and Form: The Art Of Channeling a Hot Rod 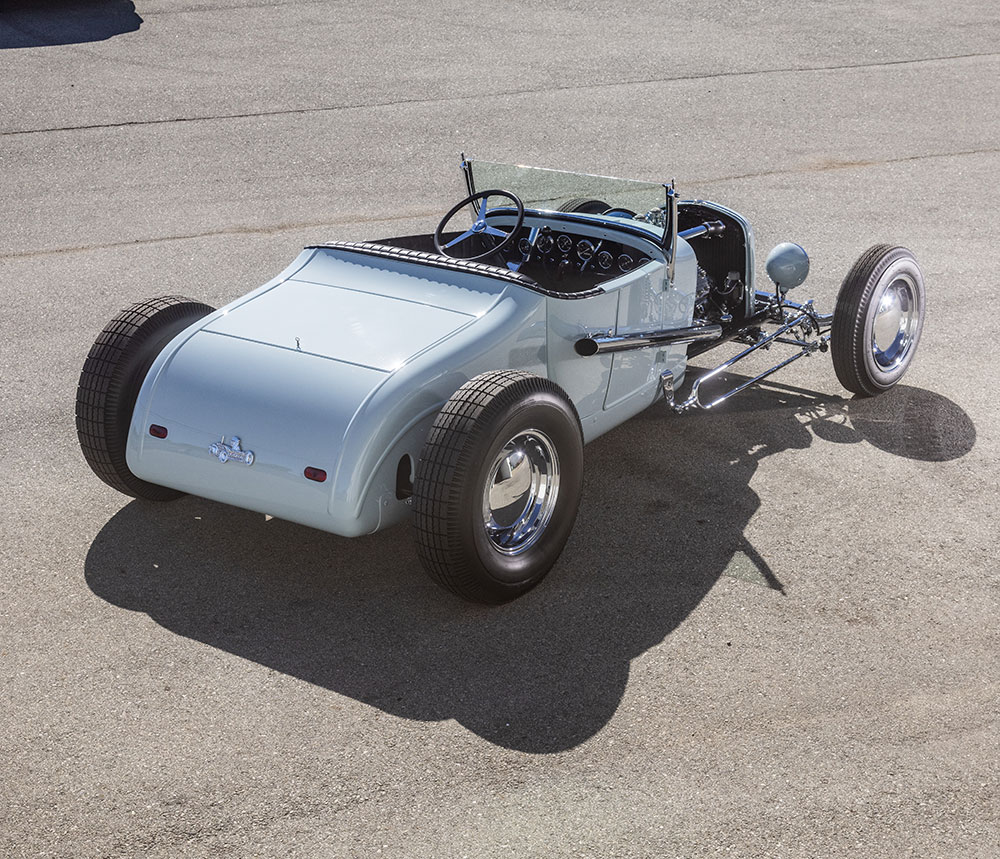 For the time, the indispensable magnesium centersection Halibrand quick-change was used, as it is still in place today. At the corners there are Kinmont disc brakes (also known by their original manufacturer’s name, Kinmont Safe Stop Disc Brakes) and Houdaille 50-50 shocks. A ’40 Ford master cylinder is used along with the pedal assembly out of a ’39 Ford. More corner appointments include the use of steelies wrapped with BFGoodrich Silvertown/Coker rubber measuring 8.20×15 in back (with parallel cross grooves cut into the tread) and Firestone/Coker 5.50×15 in front. The 15-inch wheels are reversed ’50 Merc centers with ’50 Ford outer rim in front and Lincoln outer rim in back. 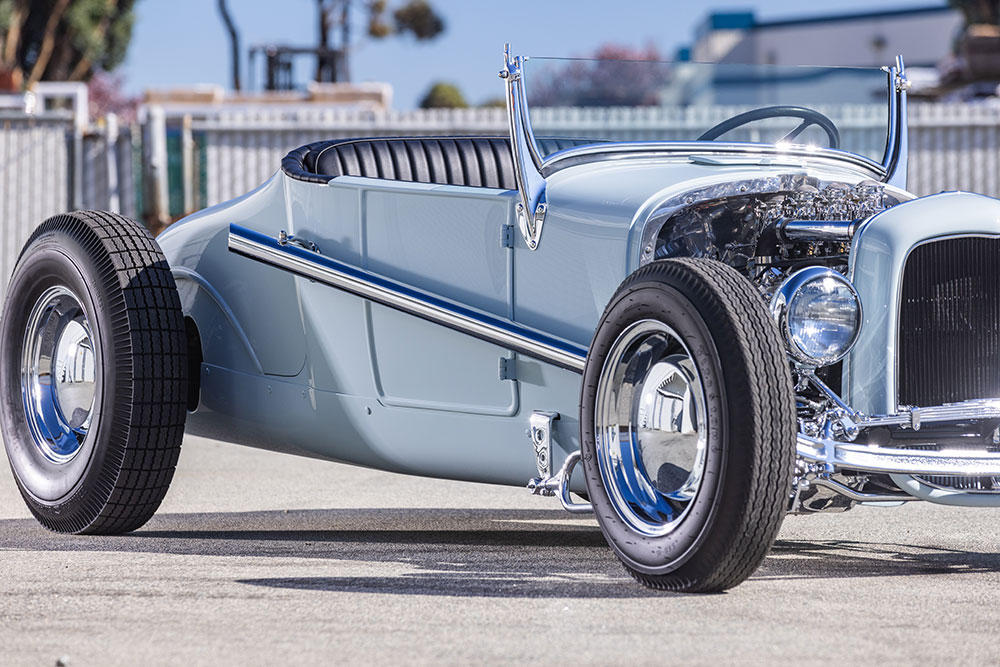 The power for the channeled roadster comes by way of a vintage Flathead engine meticulously put together by the staff at H&H Flatheads. The 285-inch iron Merc V8 engine (’48) gains its displacement by being bored to 3-5/16 inches and stroked to 4-1/8 inches and runs a Howard F10 cam. There are also chromed “W”-style custom headers; no mufflers are used. While they look like the originals, in fact, they are recreations by Jack Stratton of Brizio’s. It is then dressed for success with an Edelbrock intake topped with four Stromberg 97 carburetors (fed by a Carter electric fuel pump) all sitting on a pair of aluminum Navarro heads. 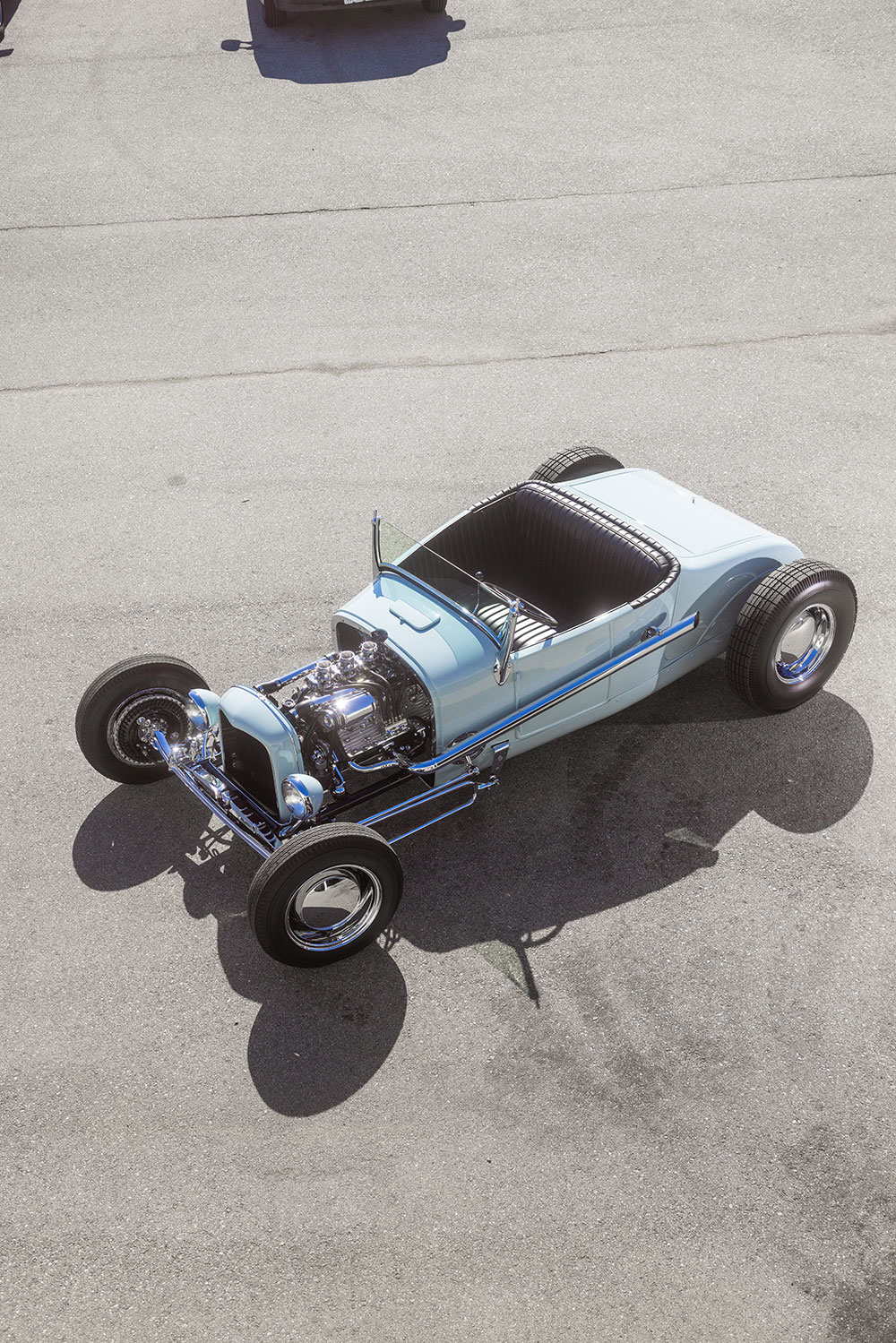 Be careful because of the engine setback the fourth carb (rear) rests under the cowl and at first glance you may miss it. Look for the notch in the top of the cowl that leads down to the rearmost carburetor. Another feature that is unique to the roadster is the Williams-made dual coils, twin 6V Echlin ignition coil, one each mounted low and in front of each of the motor mounts and solid core plug wires. From here a Kong Ignition Championship Model is used. The ignition timing can be locked down via a set screw in measured degrees of advance or retard. Backed up to the vintage Flathead engine is a ’39 Ford transmission with a 25-tooth Zephyr gear cluster. 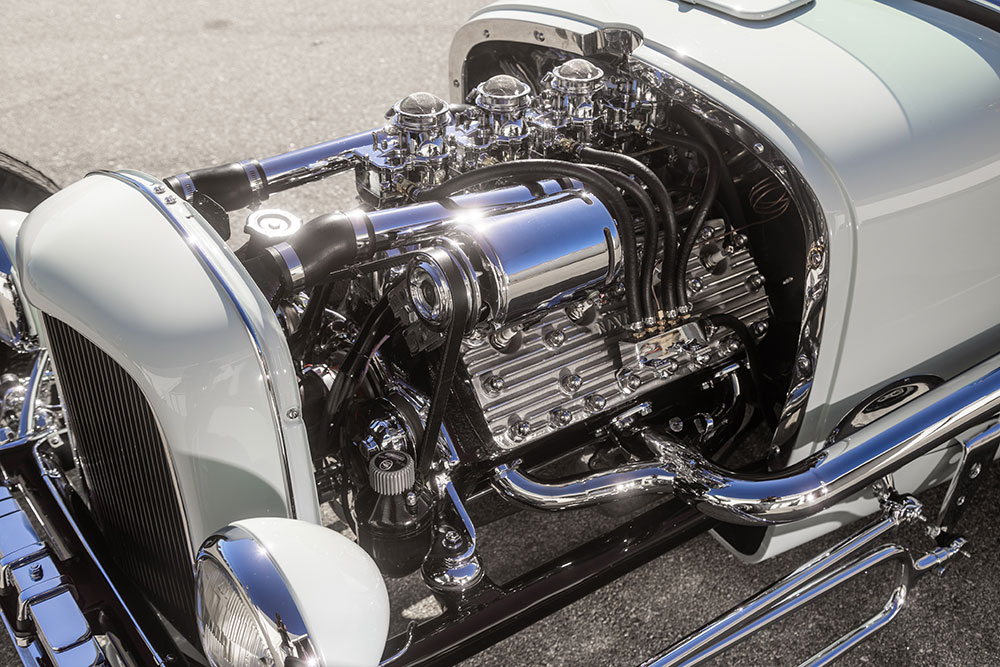 In the ’27 Ford roadster, both doors are welded shut. The ’32 grille shell was originally channeled 3 inches over the tube frame. Although channeled, Williams was careful to maintain the original bodylines—something that the Brizio shop was sure to maintain. There is some amazing metal work on this roadster, most of it falling to Andrik Albor of Brizio’s. Of note is the full aluminum belly pan (note shown) that was expertly restored at Brizio’s. Although not seen resting beneath the body are a pair of 9-1/2-gallon gas tanks mounted low within the frame rails, one on each side. All the body- and paintwork came through Vintage Color Studio under the carefully aimed spray gun of Darryl Hollenbeck. The fresh coat of paint is now a PPG Envirobase waterborne powder blue while originally it was lacquer. (Falk tells us the original color was called a robin’s-egg blue.)

Read More: How To Install A Custom Chassis On A ‘47 Ford Convertible 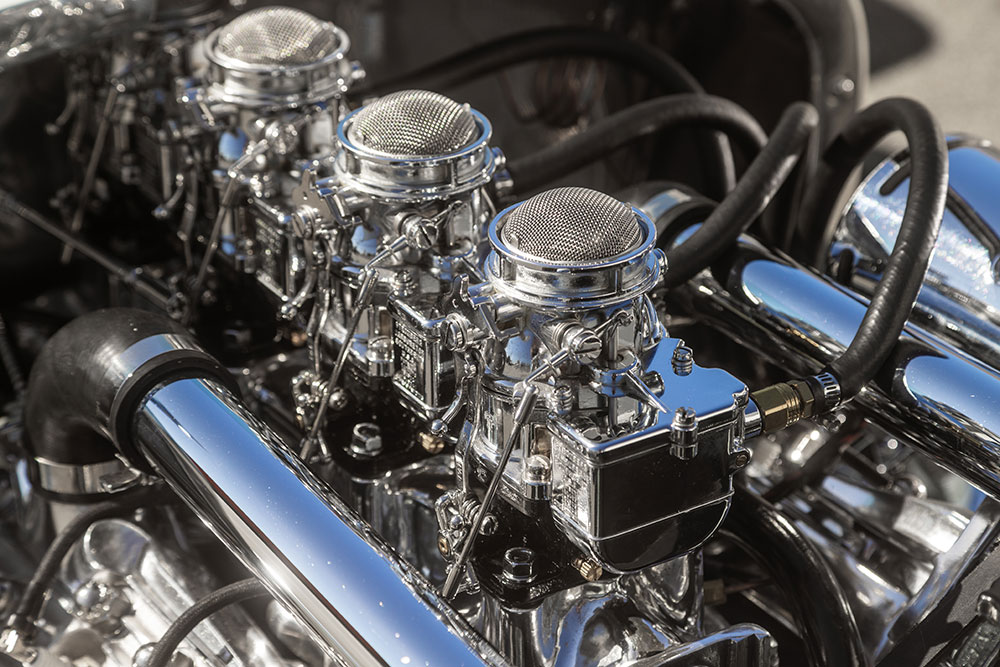 In speaking with Hollenbeck, he tells us the story on the color lineage of this hot rod with lots of input from Falk. He also made the Elmwood Auto Club plaque that appears on the back of the Ford Roadster. The roadster underwent a handful of color changes before its original color was restored by Hollenbeck. In fact, two powder blue colors were derived and Ross selected the one he felt was the closest. According to the gathered data and historic photos it appears the second color was a turquoise, then a reddish orange, then the root beer brown metallic, and then the Candy Apple Red. It seems that most hot rodders remember the car in its original powder blue or the Candy Apple Red. 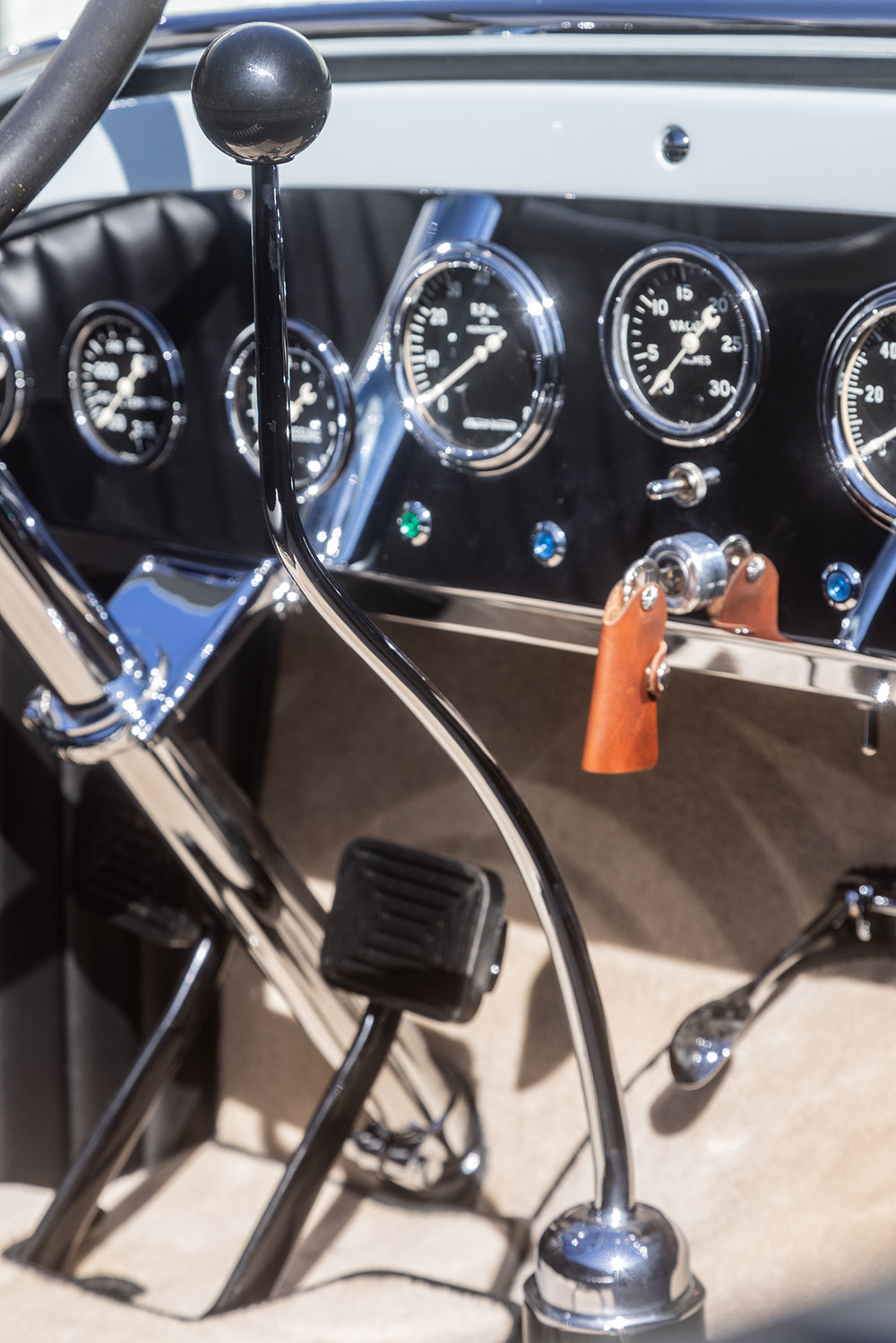 Inside you will spot the ruler straight pleats stitched in black Naugahyde by Sid Shavers Upholstery while the chromed dash shows off a full complement of Stewart-Warner gauges that include: (left to right) gas, oil temperature, pressure, tach, vacuum, speedometer, oil pressure, water temperature, and amp. The gauges and all other wiring were done in a vintage-looking cloth by Jim Vickery of Brizio’s. The hot rod steering column (1-1/2-inch chrome tube) sports the original Bell steering wheel. 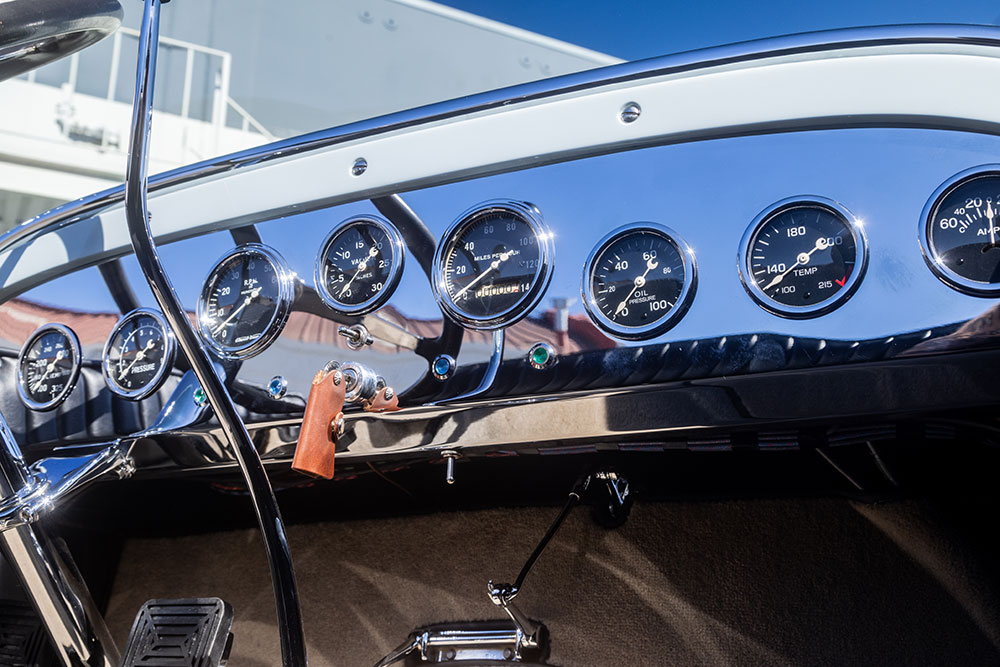 Well, there is a good chunk of history on one of our hobby’s most memorable hot rods. As always, if you get the chance to see the Williams channeled ’27 Ford roadster it is time well spent. Remember, that the idea and execution was done over 70 years ago. It was a hot rod ahead of its time. MR